Ghanaian forward Yakubu Abdul-Aziz has been plying his trade in Portuguese football for quite a while. He has donned the colours of a variety of Liga Portugal outfits, including Vizela, Vitoria Guimaraes, Estoril, and Rio Ave. Most notably, Aziz broke into the scene during loan spells at the latter two clubs. In the 2020/21 season with Estoril, he scored a total of 15 goals to help them win the Liga Portugal 2 title and earn promotion. The following season, he netted 14 goals for Rio Ave and helped them achieve the same feat.

After Rio Ave made the loan deal permanent last summer, Aziz has gone on to have an excellent half-season in the Portuguese top flight. Thus far, he has scored six goals and provided three assists in Liga Portugal 2022/23. Some of these goal contributions have come against the likes of FC Porto, Sporting Braga, and Benfica. The 24-year-old’s impressive displays have drawn the attention of international teams, with Rio Ave recently agreeing to a transfer deal with Al Ahly of Egypt for their top goal scorer. Let’s now look at some stats that capture Aziz’s impressive performances with Rio Ave this season. 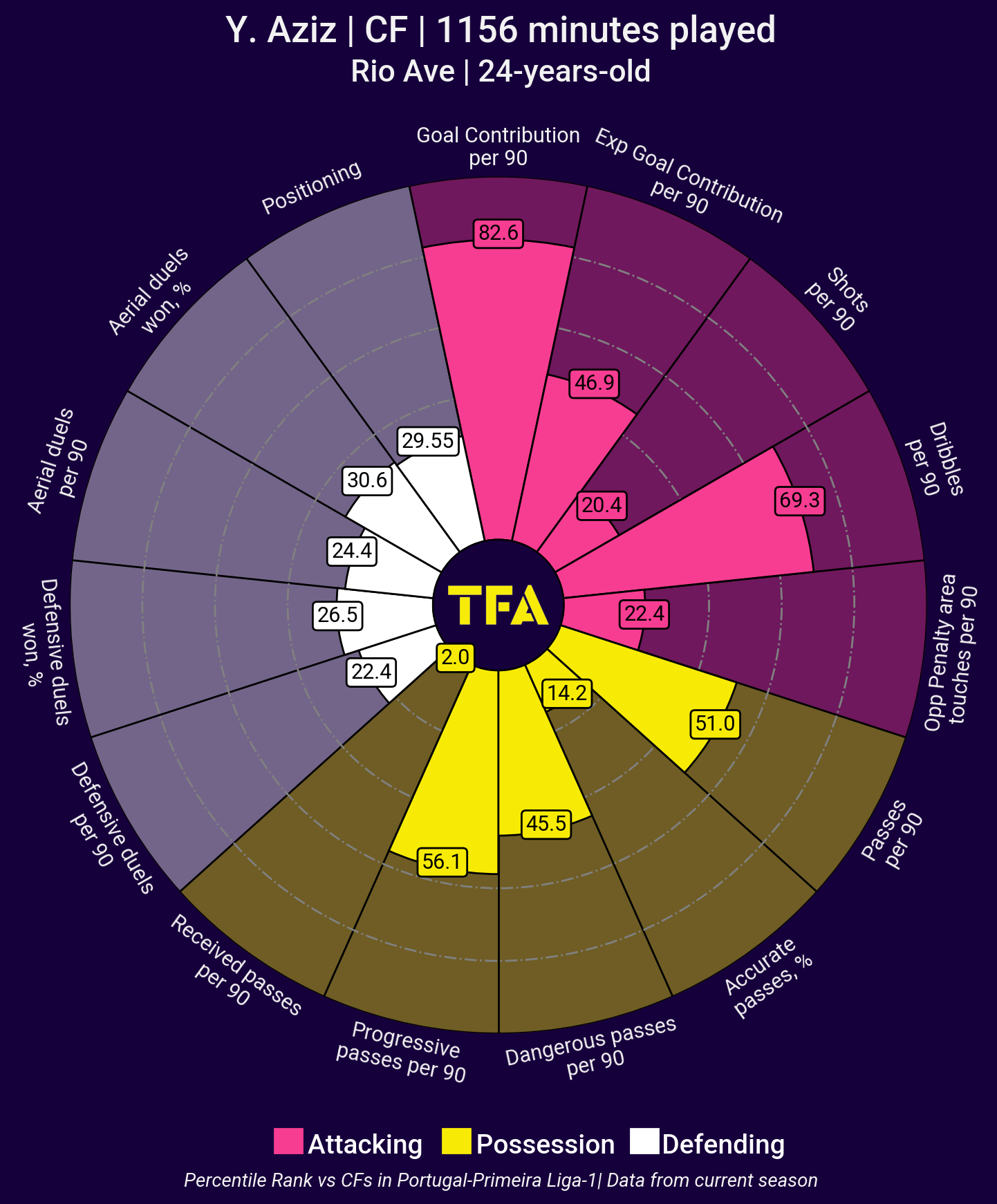 Yakubu Abdul-Aziz has played in all of Rio Ave’s 14 league matches this season, averaging 78 minutes per game. The above viz shows the percentile rank of the player’s stats compared to other centre-forwards in Liga Portugal. It can be observed that Aziz ranks highly under attacking indicators like goal contribution and dribbles per 90. Meanwhile, he is also decent in the possession department, with a reasonable percentile rank for passes and progressive passes per 90. While defence is not his strong suit, the 24-year-old can do better in terms of aerial duels, defensive duels, and positioning. 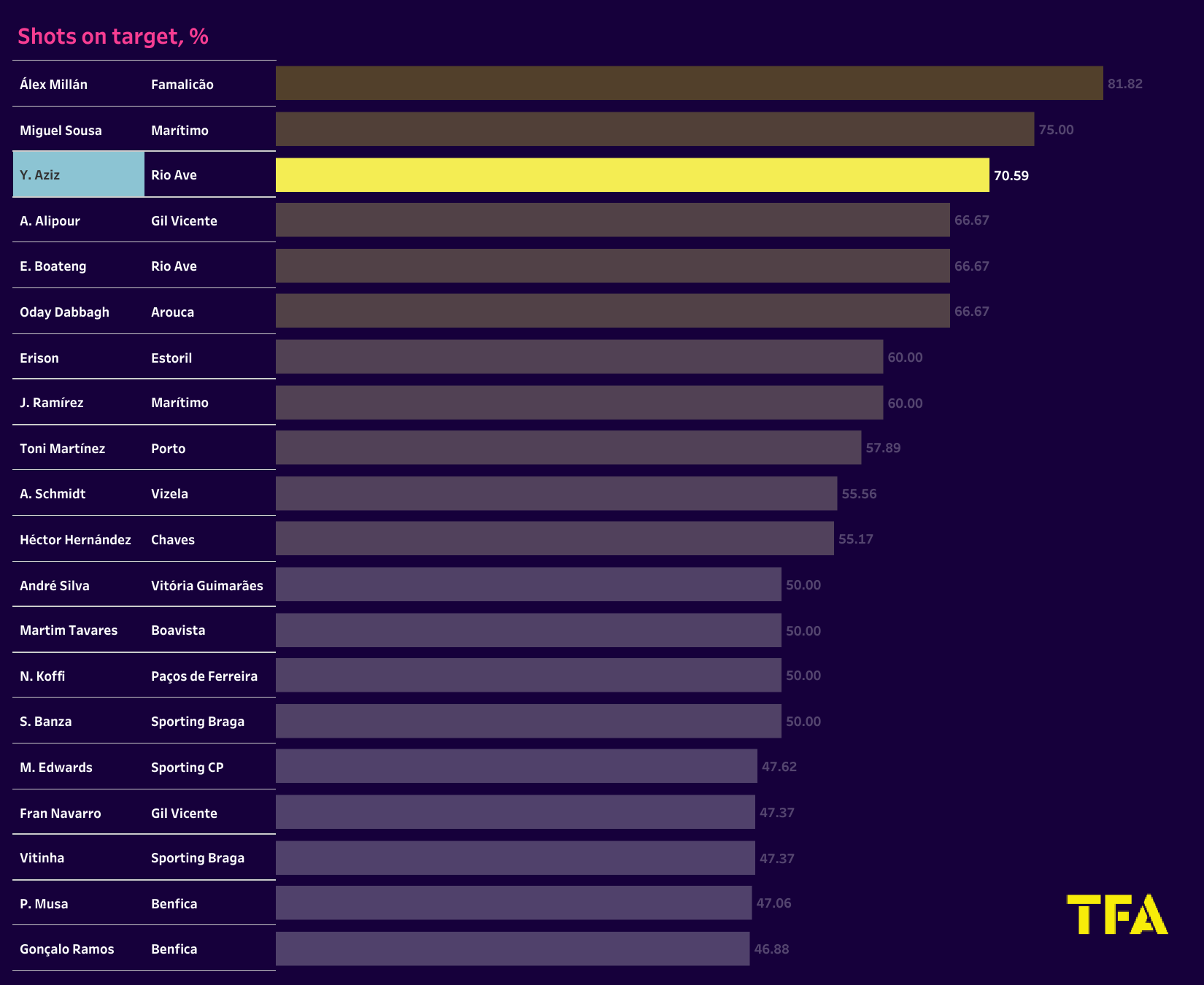 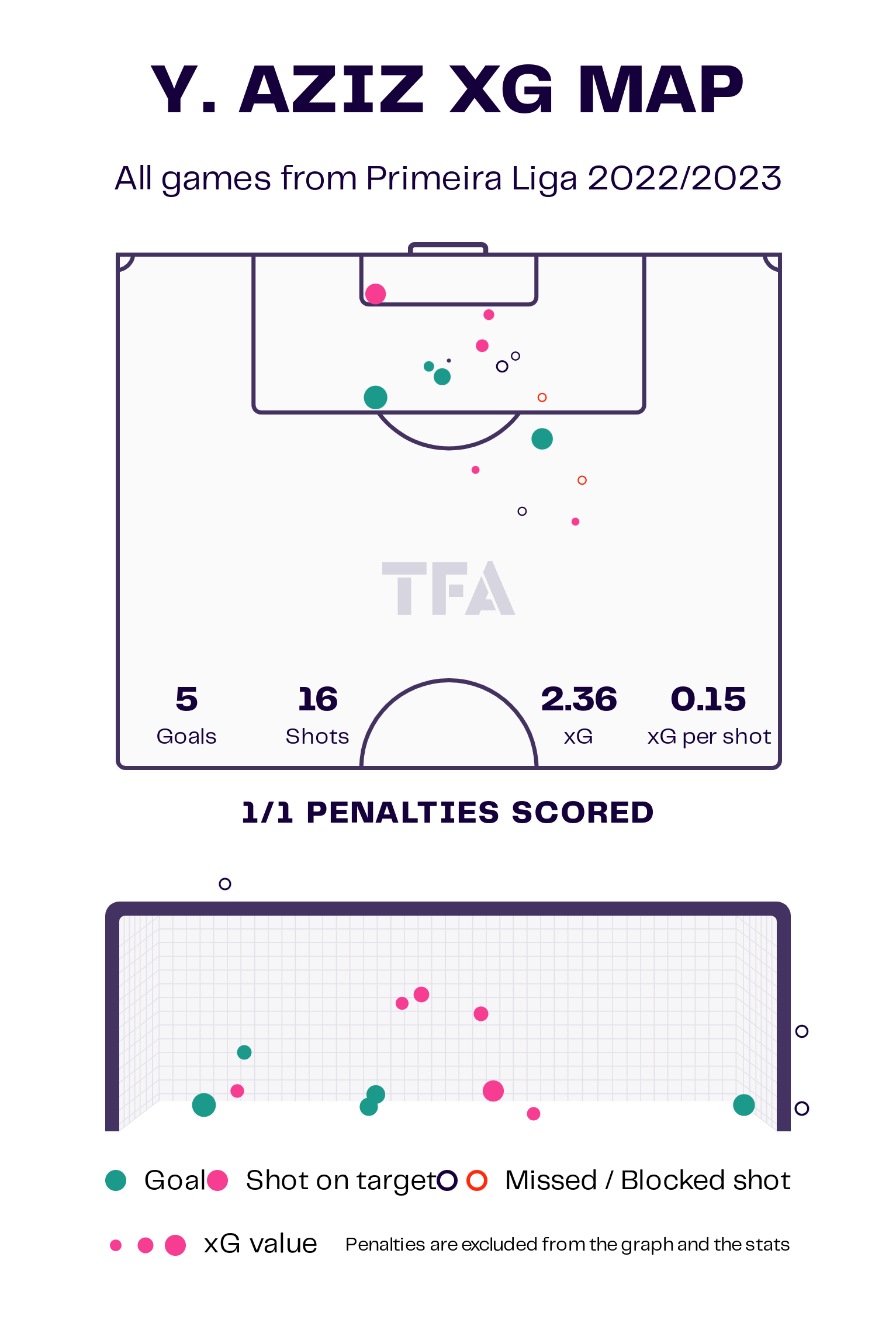 With six goals to his name, Yakubu Abdul-Aziz is Rio Ave’s highest goal scorer this season and fifth in the Liga Portugal scoring charts. With an average of 0.47 goals per match, he is outperforming his average xG rate of 0.24. The viz above depicts Aziz’s shot map from this season. He has attempted 16 shots, with most of them coming from inside the penalty area. While four of his goals have come from close range, one has come from the edge of the box. While Aziz takes a low number of 1.32 shots per game, his 70.6% shot accuracy rate is one of the highest among other centre-forwards. 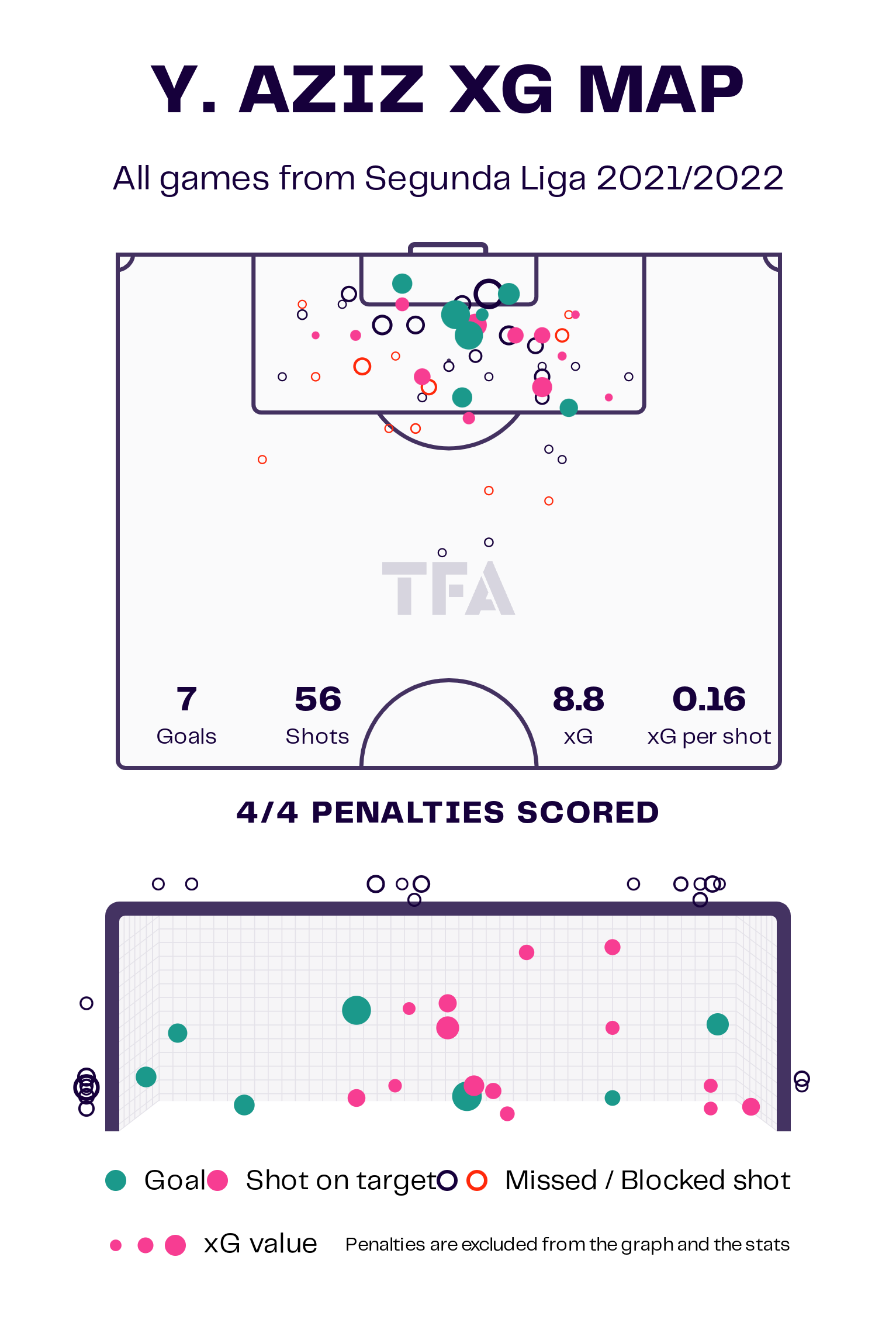 In comparison to the 2021/22 season, Aziz scored a total of eleven goals in Liga Portugal 2. He attempted 56 shots, averaging 2.29 shots per game with an inferior accuracy rate of 41.7%. He was scoring 0.42 goals per game with an xG per match rate of 0.45. Additionally, Aziz had zero assists last season but has three to his name this term. He has played against tougher opposition in the top tier this season and yet has managed to keep his goal contributions intact.

Yakubu Abdul-Aziz with the ball 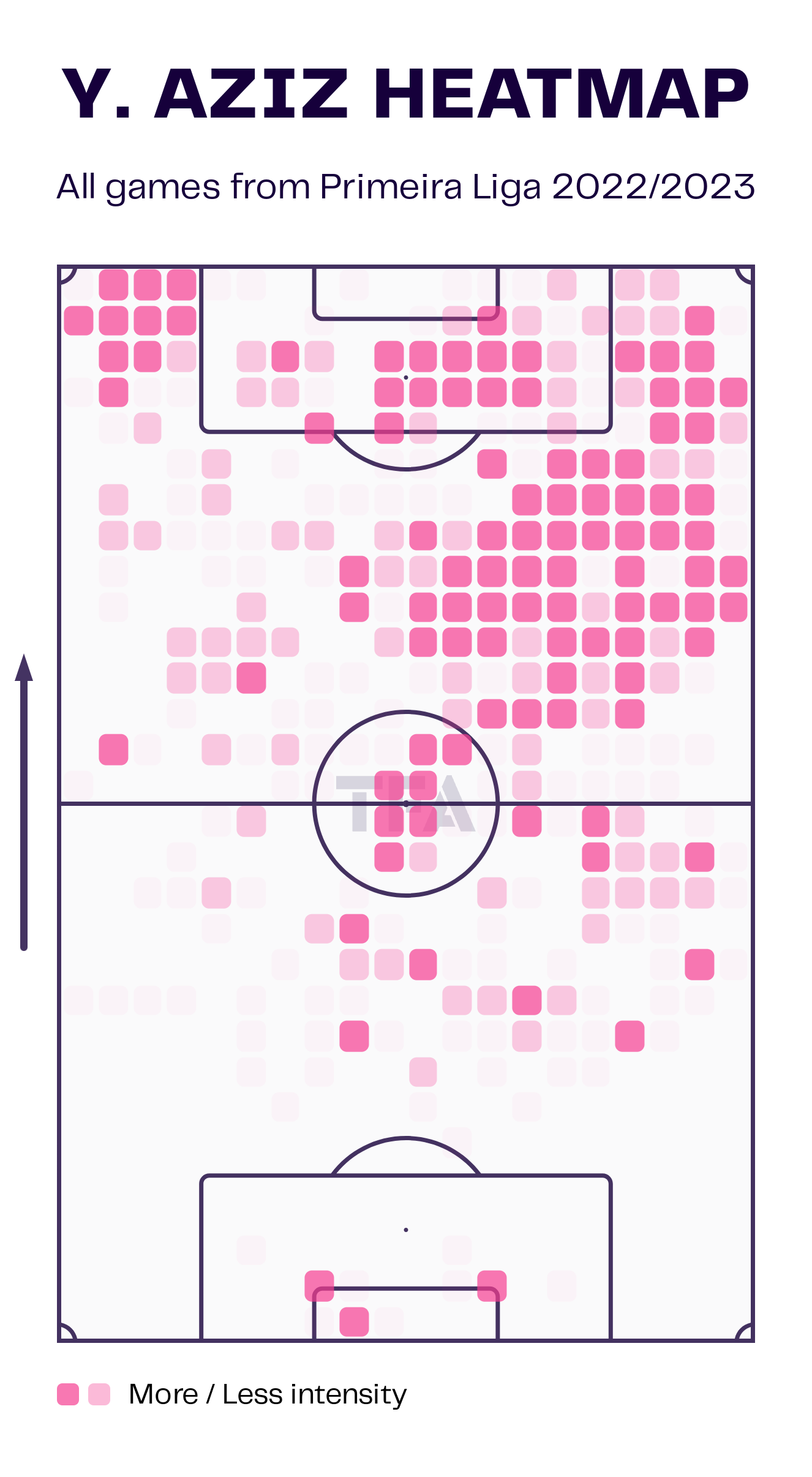 The Ghanaian centre-forward possesses the characteristics of a traditional target man, whose main duty is to get goals. The above viz illustrates the player’s heat map from Liga Portugal 2022/23. It infers that Aziz displays more intensity and moves around in the central areas of the final third and towards the right side. He moves into the overlapping channels on either flank and drops into midfield to link up play. Aziz averages 14.42 passes per match, of which 2.25 are in the forward direction. Furthermore, he passes the ball to the penalty area 1.41 times per game, along with 1.07 passes to the final third. 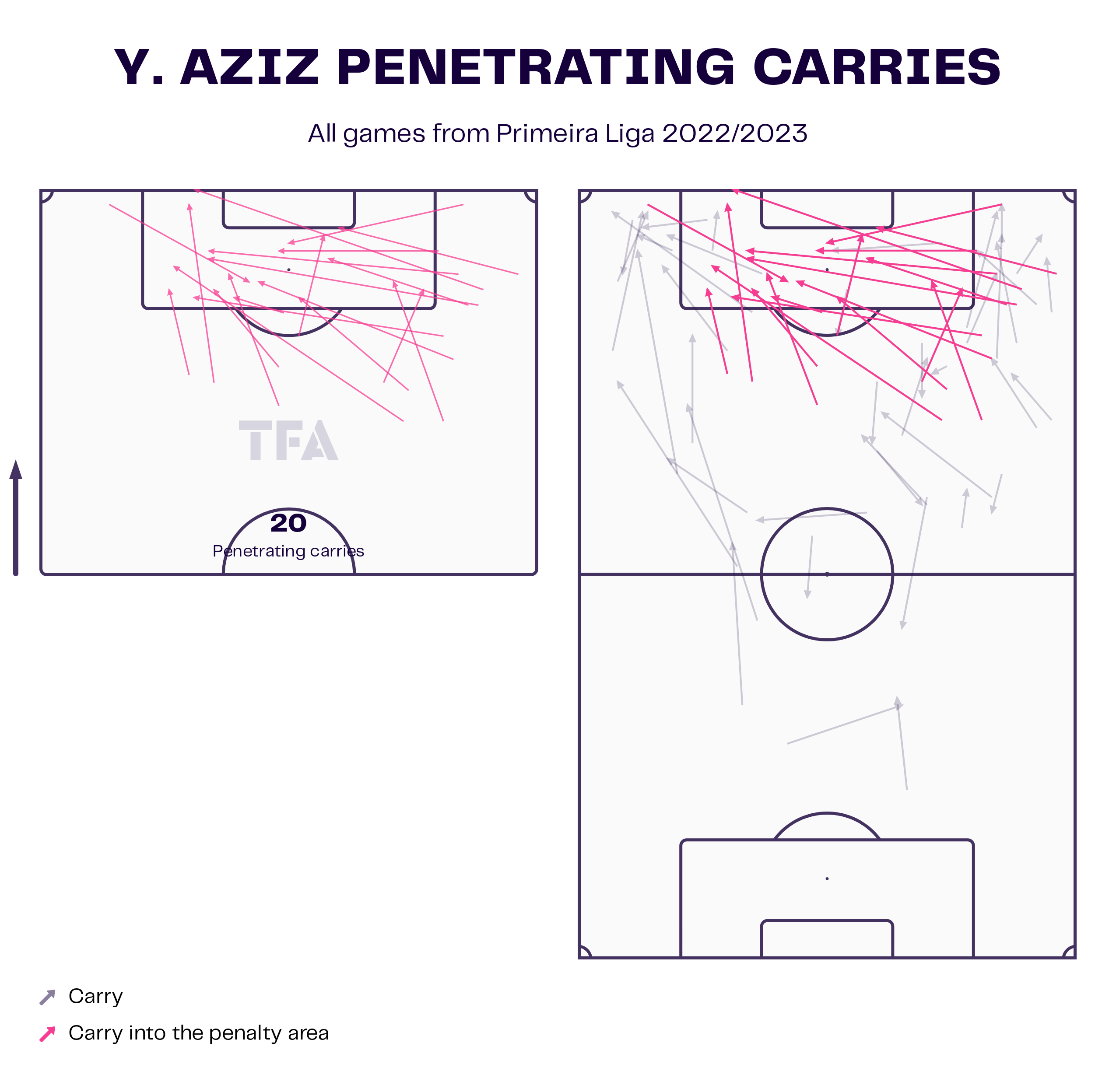 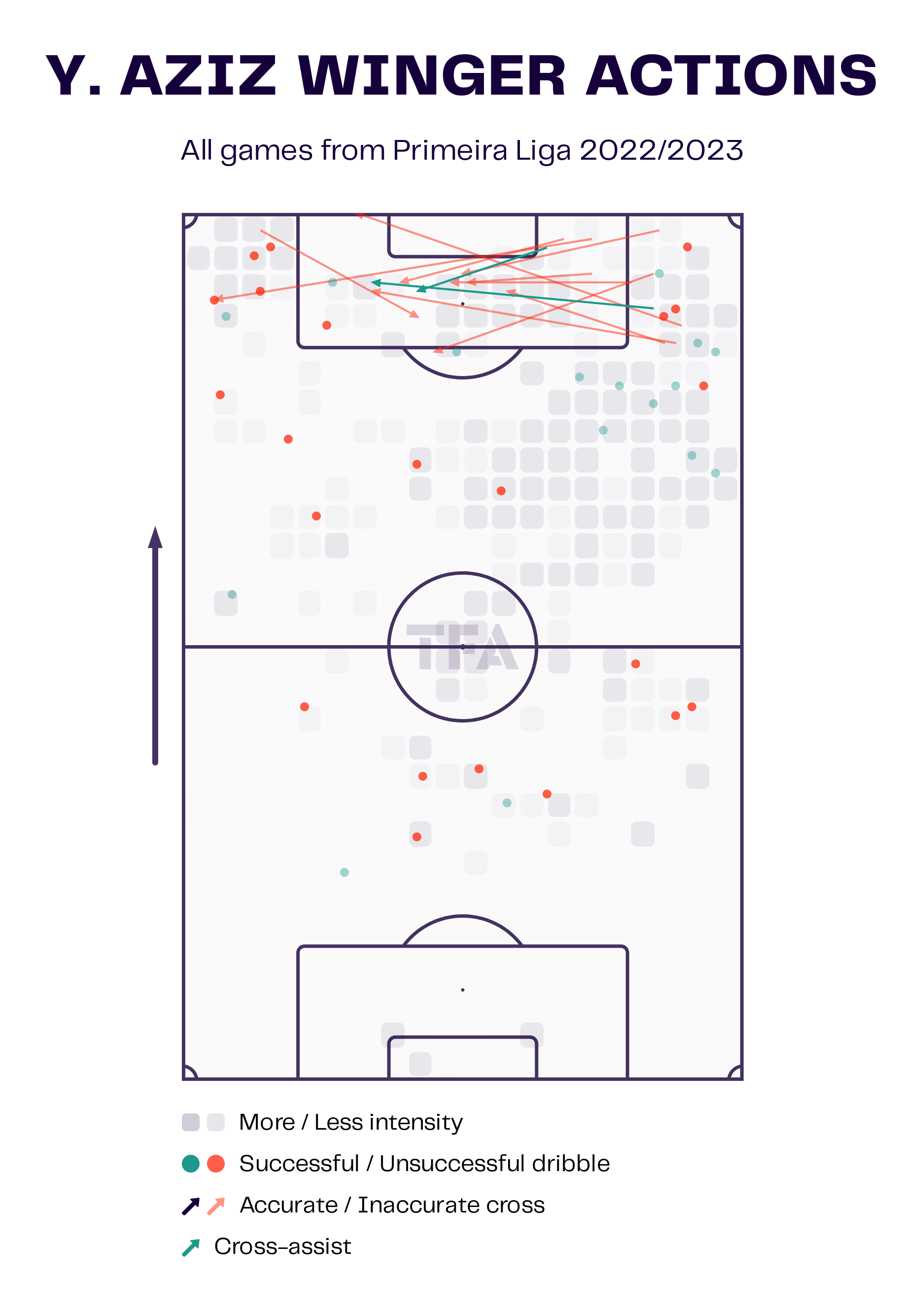 Abdul-Aziz means business in the penalty box, but he also likes to drift wide to stretch the play and create chances. The two visuals above highlight his creative capabilities with the ball. The Ghanaian can make penetrating carries into the penalty box, with 20 such instances seen this season. Sometimes he likes to take on players in wide positions; other times he puts crosses into dangerous areas. Currently, he attempts 2.8 dribbles with 54.7% accuracy and 2.1 crosses with 16.5% accuracy. Furthermore, Aziz averages 3.66 touches in the penalty area along with one progressive per match.

Yakubu Abdul-Aziz has been one of Rio Ave’s key players for the past couple of seasons. He poses a threat to opposing defences with his ability to score goals and an eye for providing assists. With Rio Ave sitting in a respectable seventh place in Liga Portugal, perhaps it was time to cash in on the 24-year-old and invest in their overall squad.