Wenderson Galeno is one of the emerging wingers in Liga Portugal. He started his career in his home country of Brazil before signing for Porto in 2016 and was assigned to the club’s B team. After a couple of loan spells with Portimonense and Rio Ave, Galeno moved onward to play for Sporting Braga, winning two trophies during his two-and-a-half years with the club. Thereafter, he returned to Porto in a permanent deal in early 2022 and enjoyed the highs of another successful season, as the Dragons went on to win the Liga Portugal title and the Portuguese Cup. This season, Galeno has taken up a more regular role for Sergio Conceicao’s side. He has been one of Porto’s top performers with 11 goals and four assists in all competitions so far. The Brazilian has also thrived in the UEFA Champions League with two goals and three assists under his belt. Below are some stats that delve into Wenderson Galeno’s performances with FC Porto in Liga Portugal 2022/23. 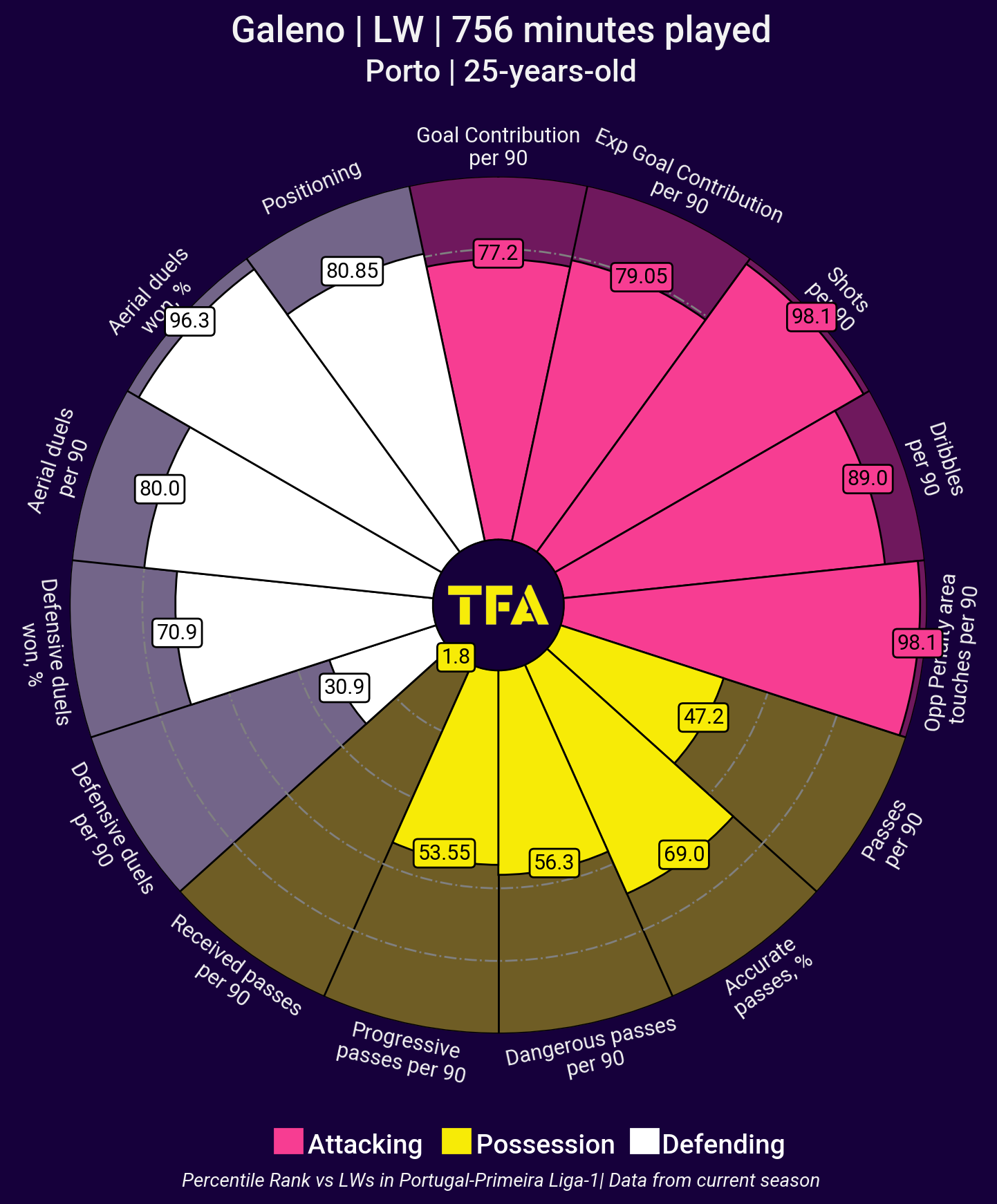 Wenderson Galeno has made 15 league appearances for Porto this season, starting in seven matches and averaging 52 minutes per game. The above viz shows the percentile rank of the player’s stats compared to other left-wingers in Liga Portugal. It can be observed that Galeno ranks at the top for attacking and defending indicators like shots, opponent penalty area touches, and aerial duels won. Meanwhile, other areas where he has a high rank include dribbles, expected goal contribution, defensive duels and accurate passes. 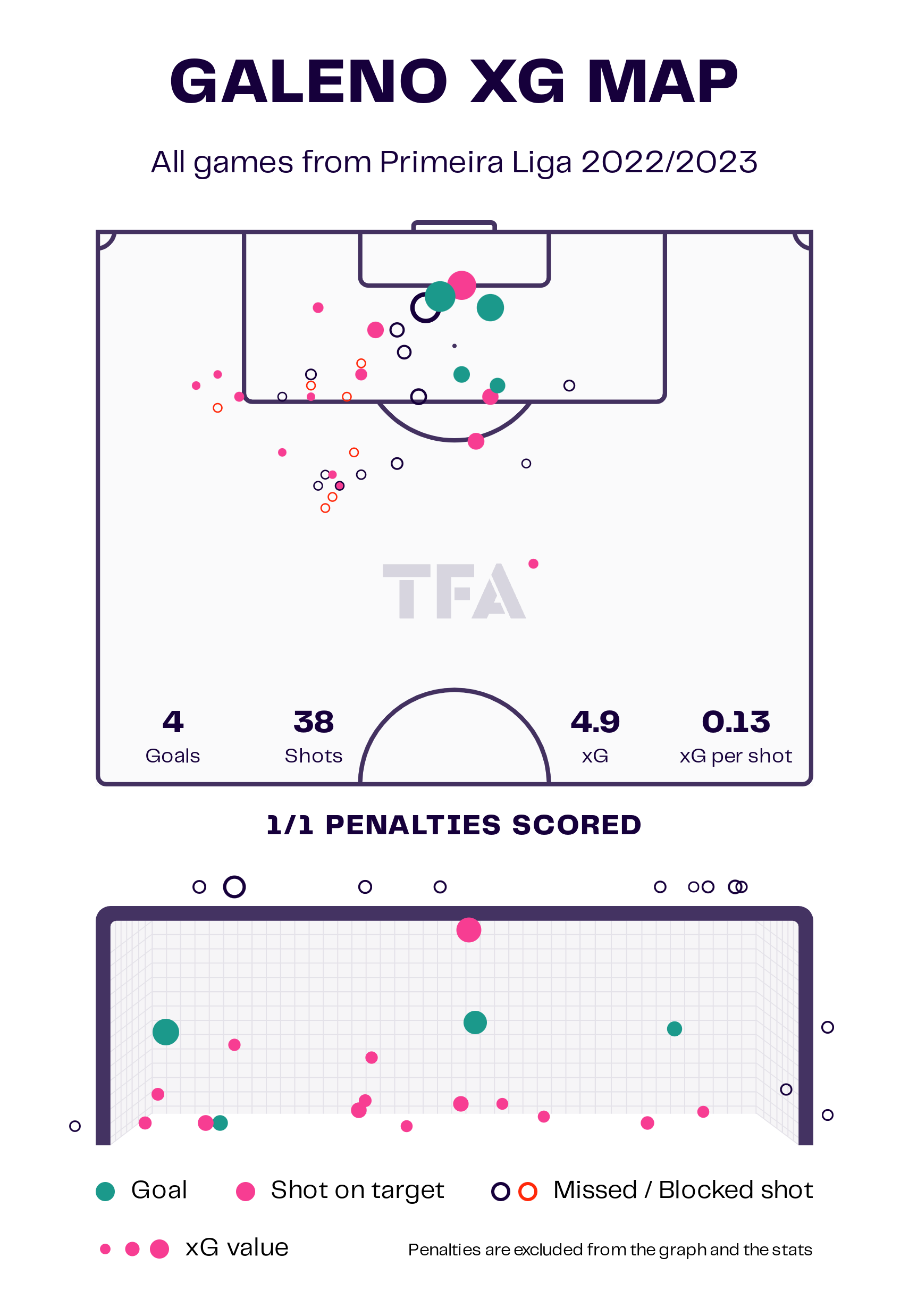 Wenderson Galeno has found the back of the net five times so far this season, with an xG of 4.9 (excluding penalties). He is clocking 0.52 goals per match, which is consistent with his average xG rate of 0.59. The viz above depicts the left-winger’s shot map from Liga Portugal 2022/23. He has attempted 38 shots with 18 on target. While all his goals have come from inside the penalty area, he has attempted some shots from outside the box mainly from the left side. Galeno takes an average of 4.09 shots per match with an accuracy of 48.7%. 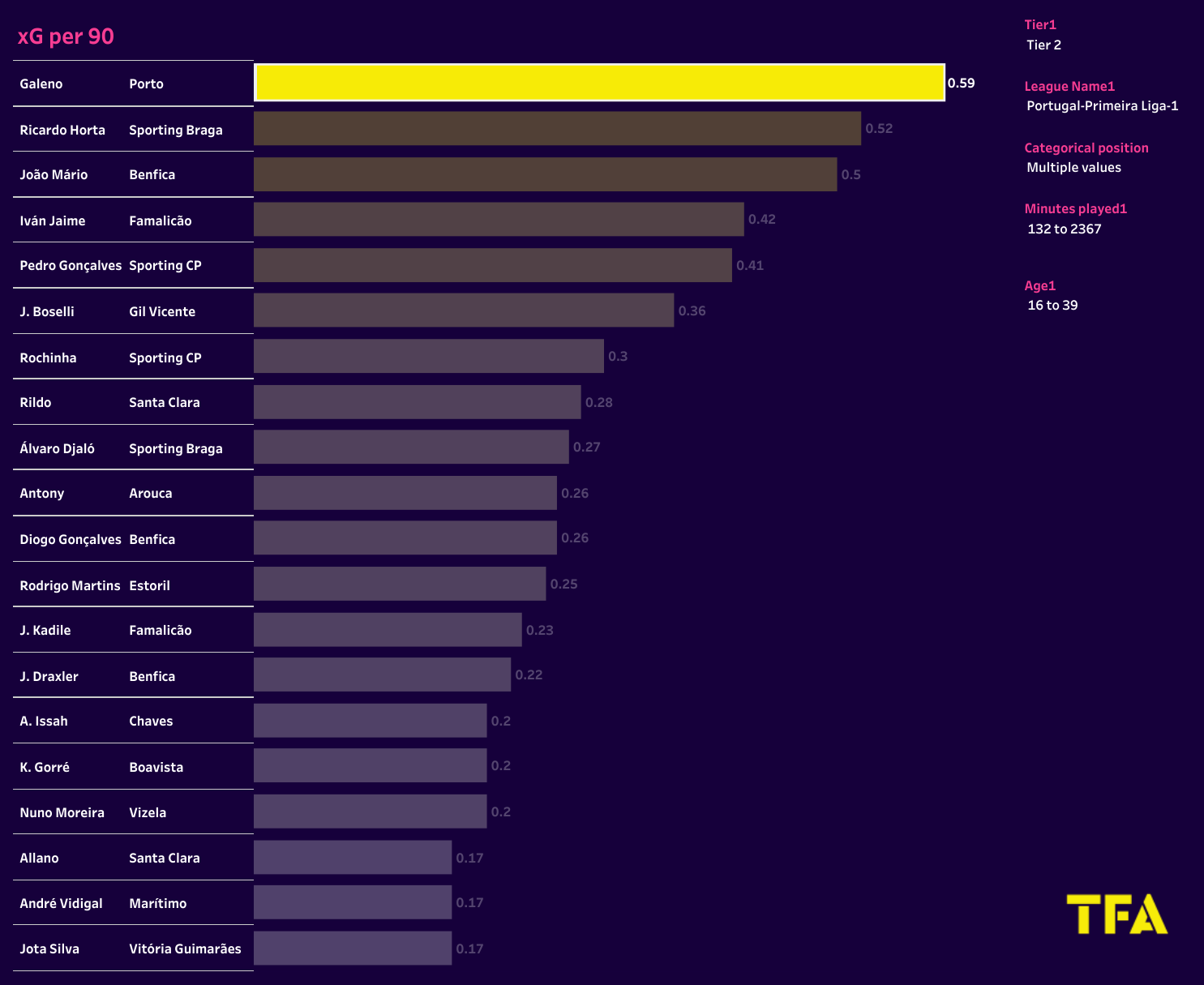 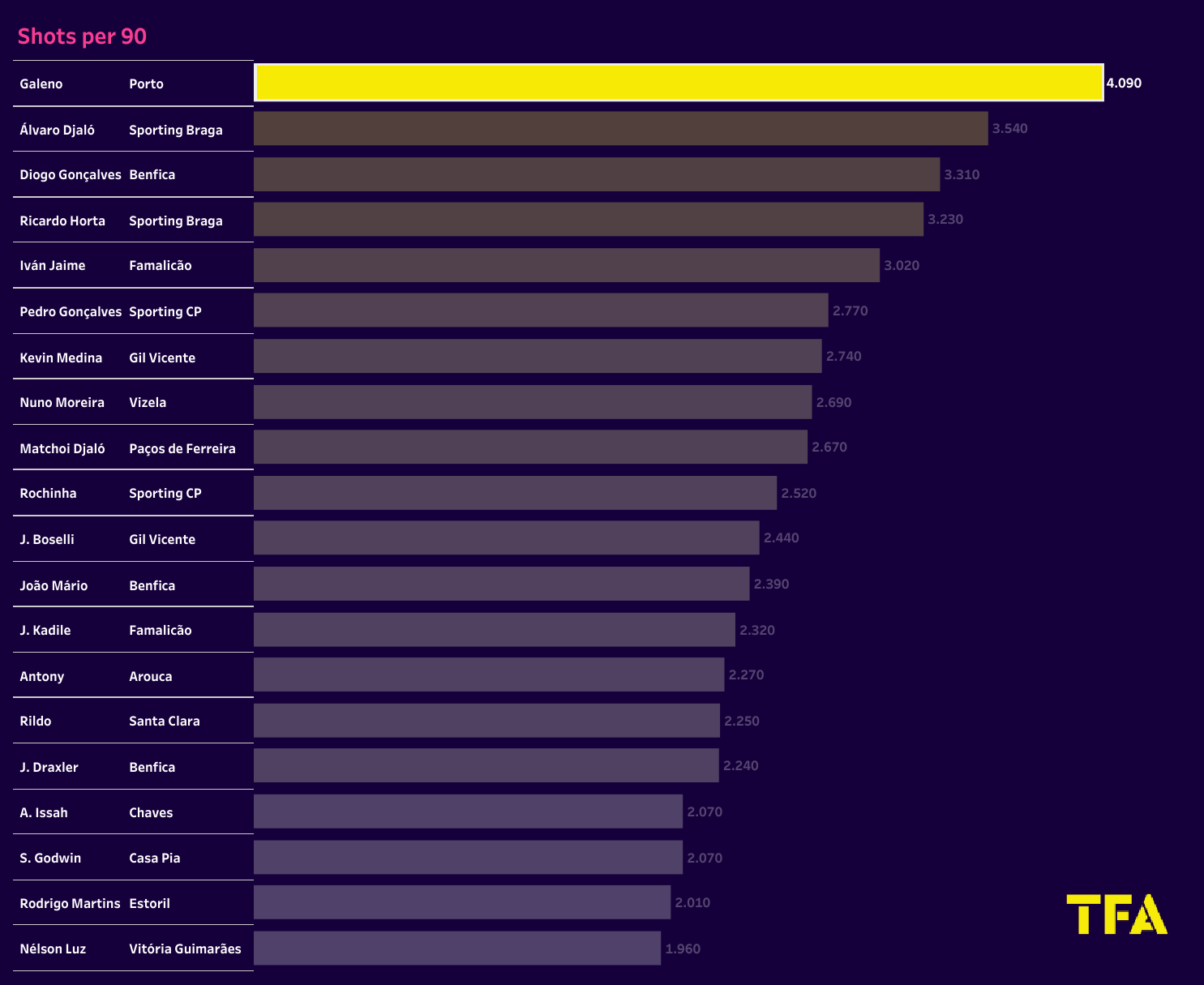 The two benchmarking visuals above compare Galeno with other players featured as left-wingers in Liga Portugal on the basis of xG and shots per match. The 25-year-old attacker tops both lists. He has the highest xG value per 90 as well as takes the most number of shots. These stats highlight Galeno’s immense attacking prowess as a Porto player. Besides netting five goals, he has also provided one assist this season. 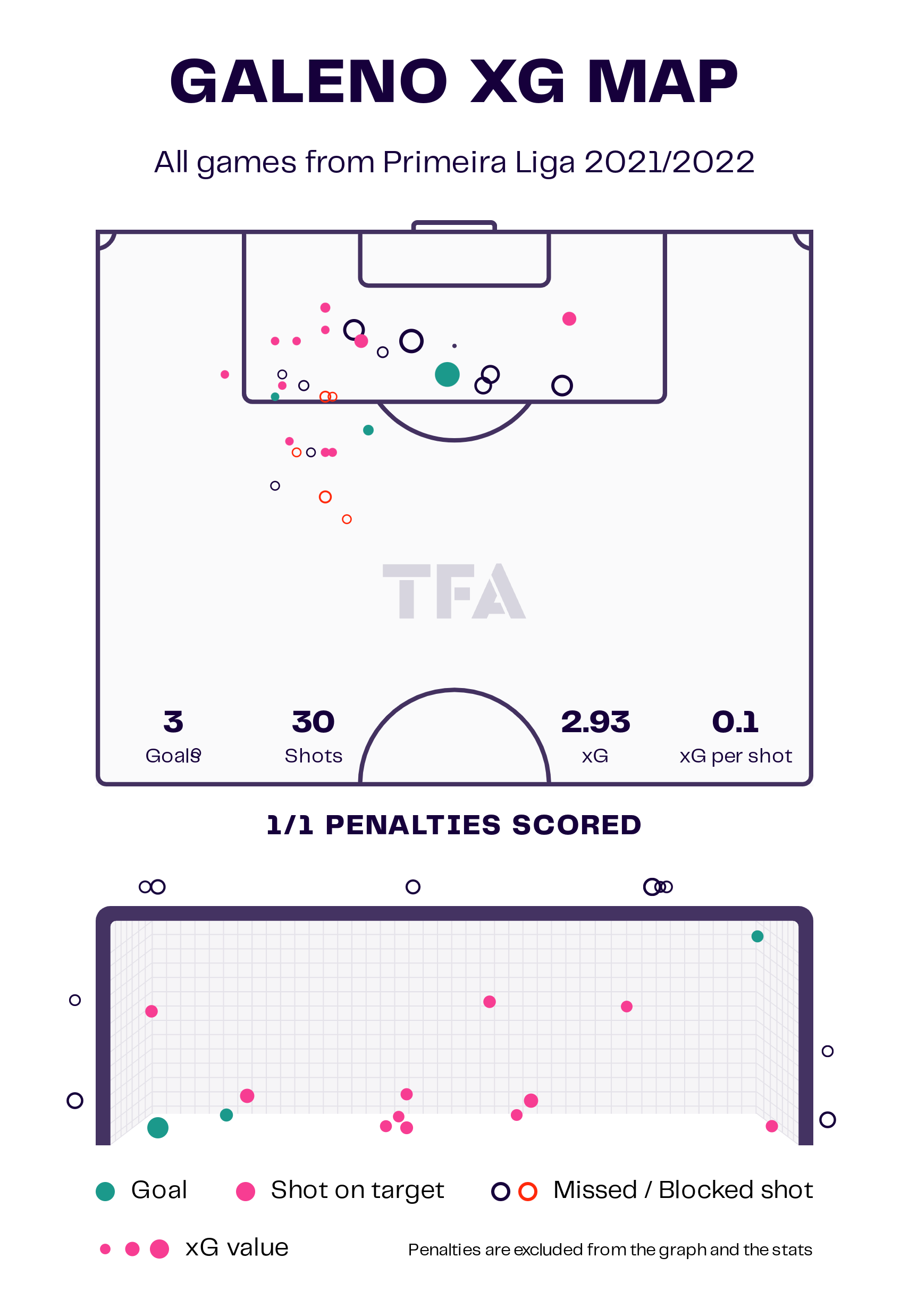 In comparison to the 2021/22 season, Galeno scored four goals and provided three assists from 26 league appearances. He was averaging a much lower number of 1.97 shots per game with a similar accuracy rate of 48.4%. The winger scored 0.25 goals per game with an average xG rate of 0.23.  The 25-year-old winger has already scored more goals than last year and will be keen to touch double-digit figures this season. 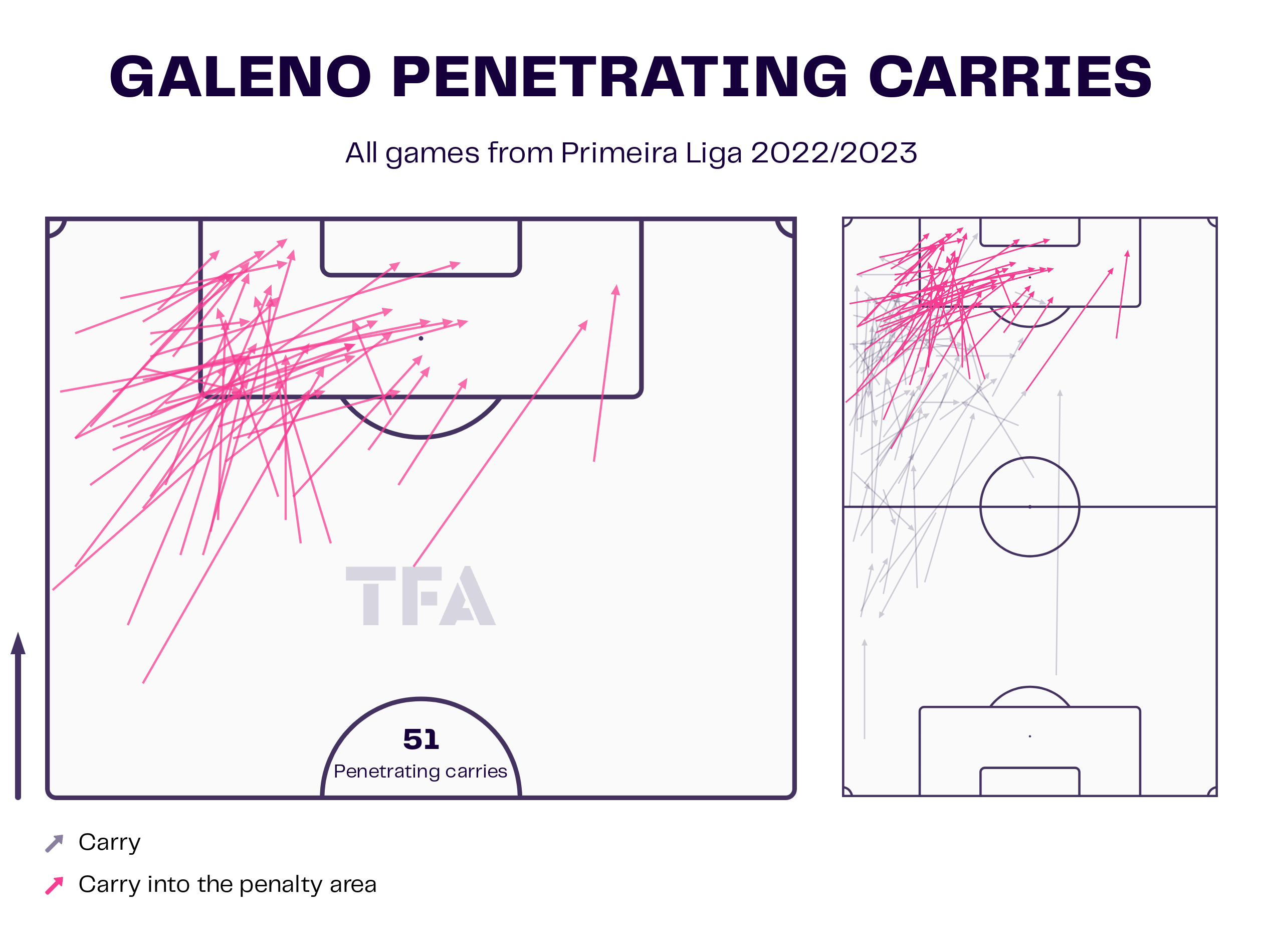 Dribbling is one strong characteristic of the Brazilian winger. Galeno likes to cut inside on his dominant right foot and can penetrate the opponent’s defensive lines using his speed and agility. The above viz shows the penetrating carries made by Galeno in Liga Portugal 2022/23. We can observe that he is proficient at making penetrating carries into the penalty box, with 51 such instances seen so far this season. 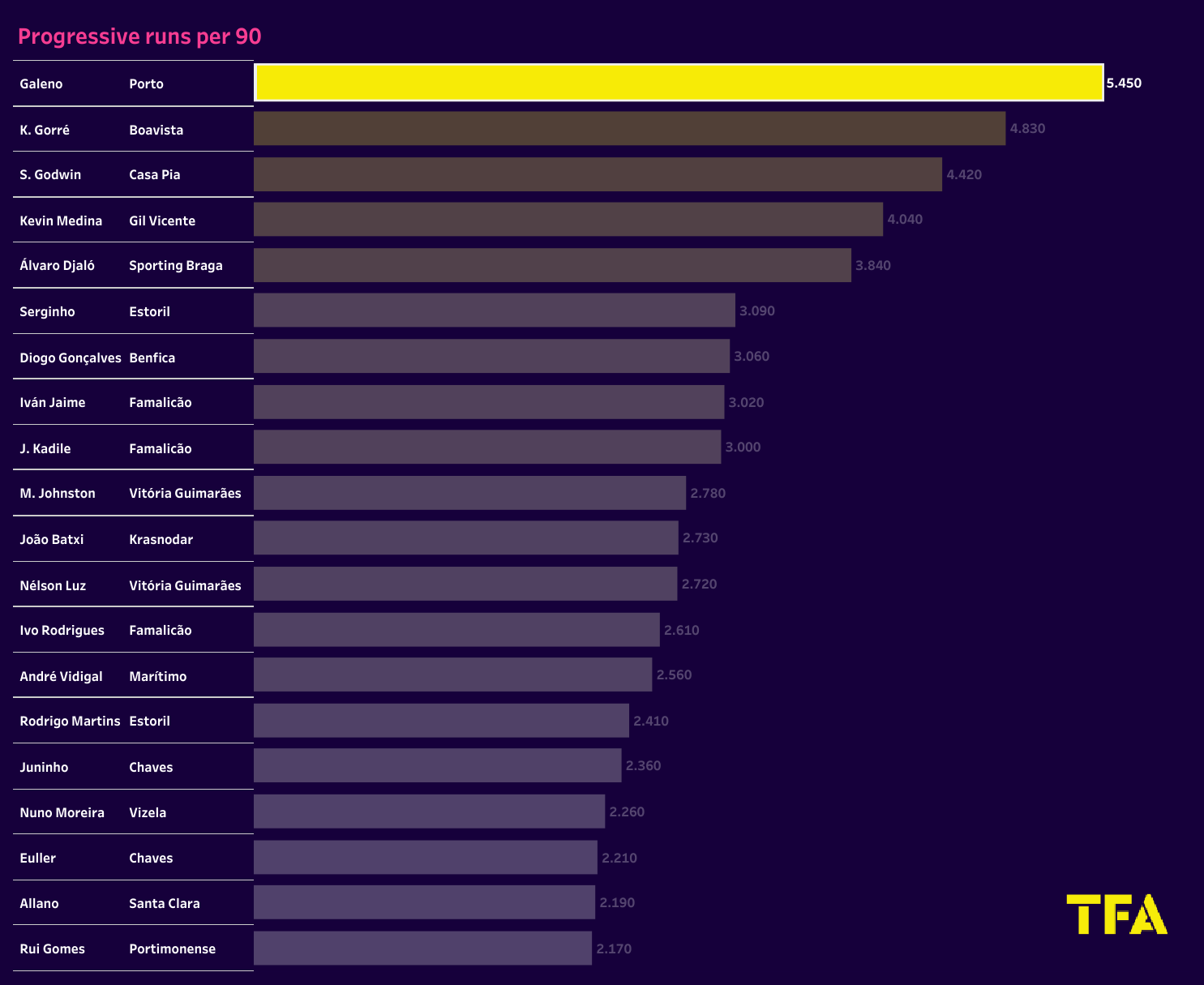 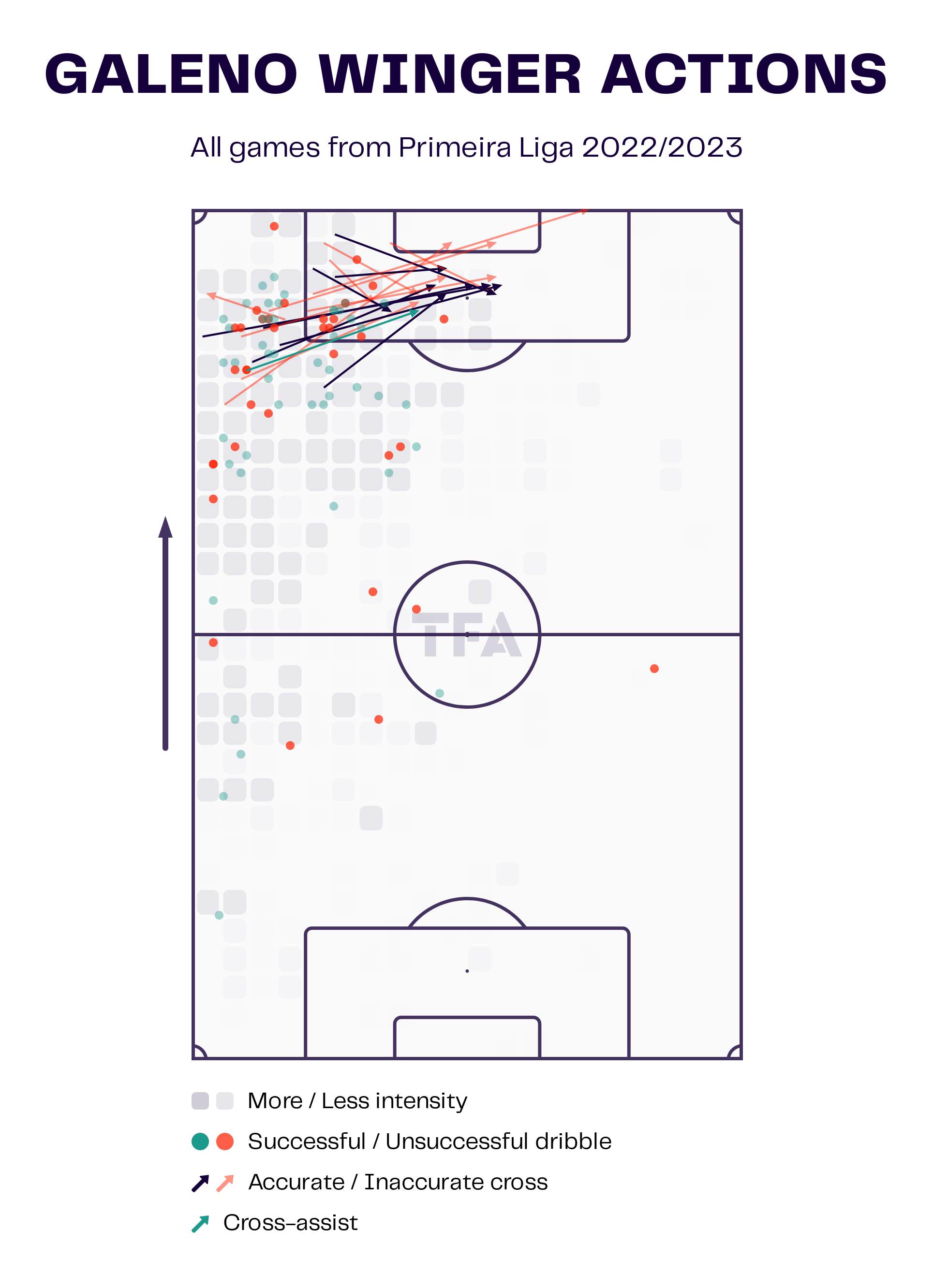 Playing as the left winger, Galeno drifts wide to stretch the play as well as cuts inside from wide positions to attempt a shot or create chances. Sometimes he likes to take on players 1v1; other times he puts crosses into the box. The viz above highlights the winger actions performed by the player this season. Galeno attempts an astounding amount of 8.6 dribbles per match with 57.3% accuracy and 2.52 crosses with 37.5% accuracy. Furthermore, Galeno makes 5.45 progressive runs per match, which is the most among similar players and averages a high number of 4.07 touches in the penalty area.

Strong in the air 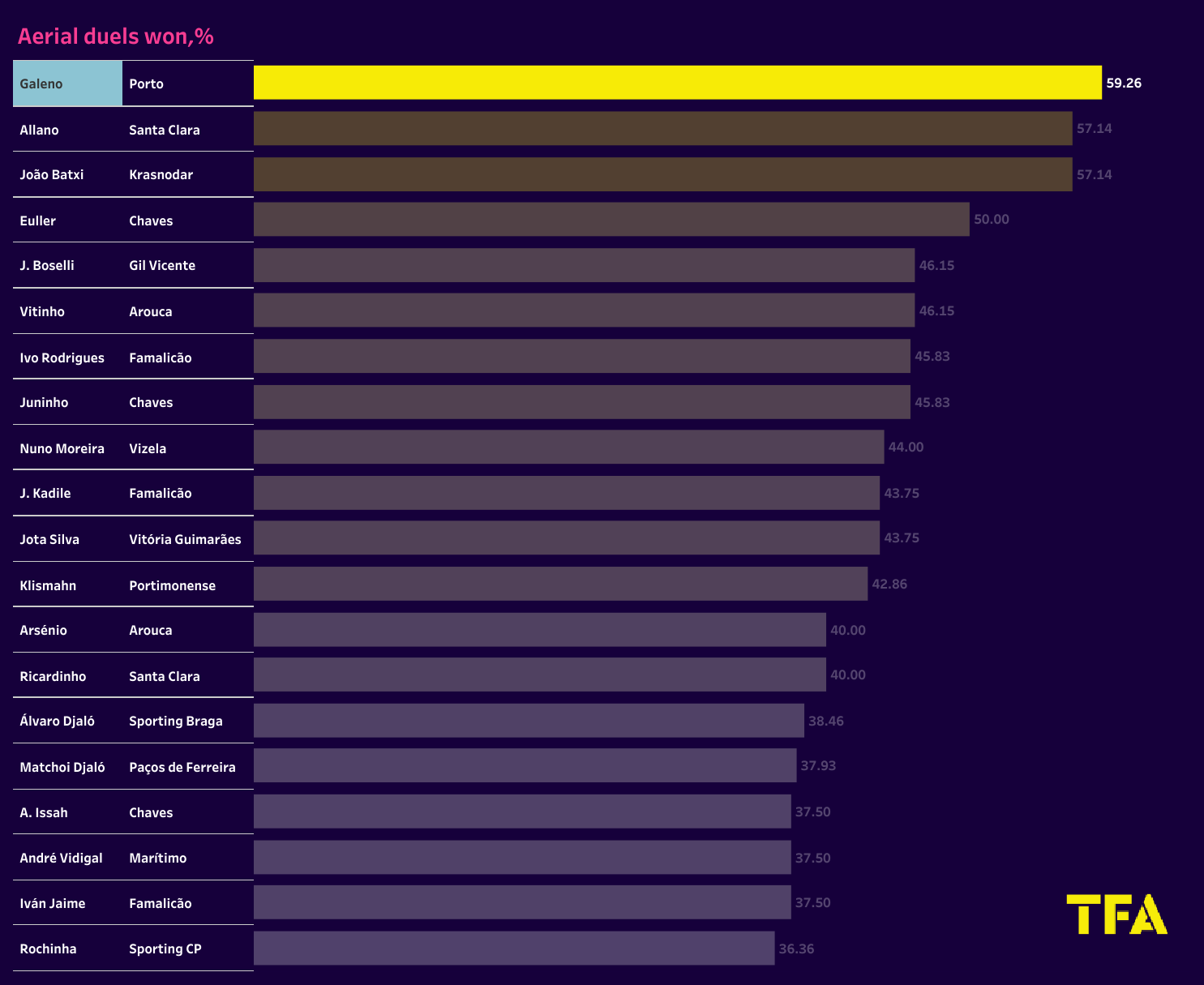 Wenderson Galeno has given several impressive performances since returning to Porto and has become a regular member of the team in the process. He possesses a range of attacking skill sets to unlock defences and brings a genuine goal-scoring threat to the table. Porto will be hoping for more of the same from their 25-year-old winger as they look to deliver another successful campaign.