In Liga Portugal, Vitoria Guimaraes have been a consistent contender for European football. Last season, Vitoria finished sixth with 48 points and made it to the UEFA Conference League. This season, they find themselves in similar territory, with the club sixth in the table, one position short of a Europa League spot.

How has Vitoria performed this season?

Currently, Os Vimaranenses have 23 points after seven wins, two draws, and five losses. They have shown impressive home form this season but have struggled on the road. Vitoria has five wins, a draw, and a loss in home territory. They are unbeaten in their last five fixtures at the Estádio D. Afonso Henriques, including a 0-0 draw against Benfica. On the other hand, Vitoria’s away record includes two wins, one draw, and four losses, including the most recent 3-0 defeat against Vizela.

While the team has taken 16 points in seven home games, averaging 2.29 points per game, they have taken one point per game on average in their away matches thus far. Vitoria’s inconsistent away record has kept them from building prolonged momentum in the league. However, their amazing home form is proving a boon to their quest for Europa League qualification. Below are some stats that provide an overview of Vitoria’s home and away performances in Liga Portugal 2022/23. 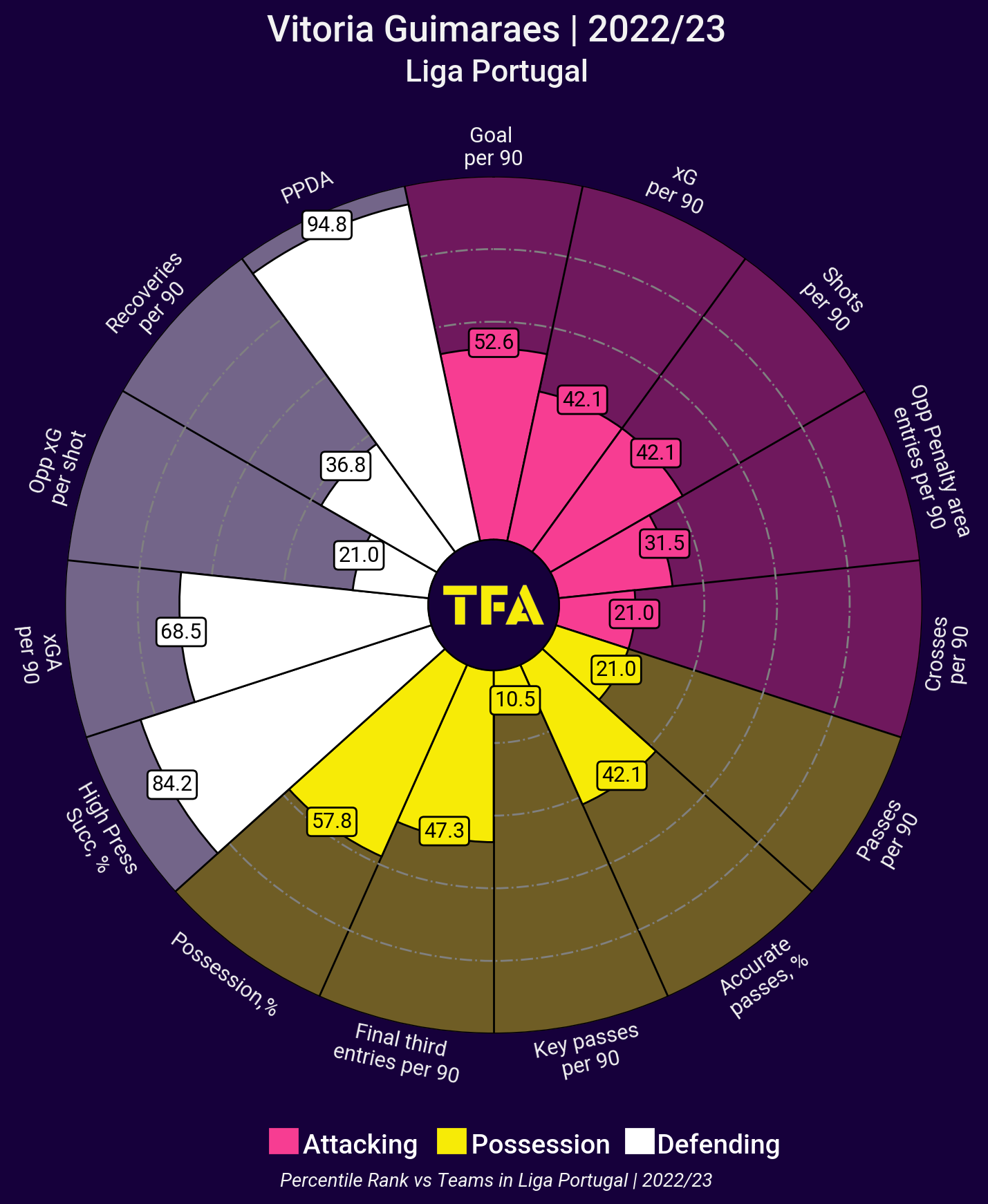 The above viz shows the percentile rank of Vitoria SC’s stats compared to other teams in Liga Portugal 2022/23. It can be observed that Vitoria are just about doing adequately in the attacking and possession departments. They have an above-average rank for goals per 90 minutes and possession rate. Meanwhile, they have a low rank with respect to indicators like shots, penalty area touches, and key passes. Alternatively, it is Vitoria’s defence that has better stats than the other departments. The team has an impressive rank for parameters like passes per defensive action (PPDA), a high pressing success rate, and xGA per 90. 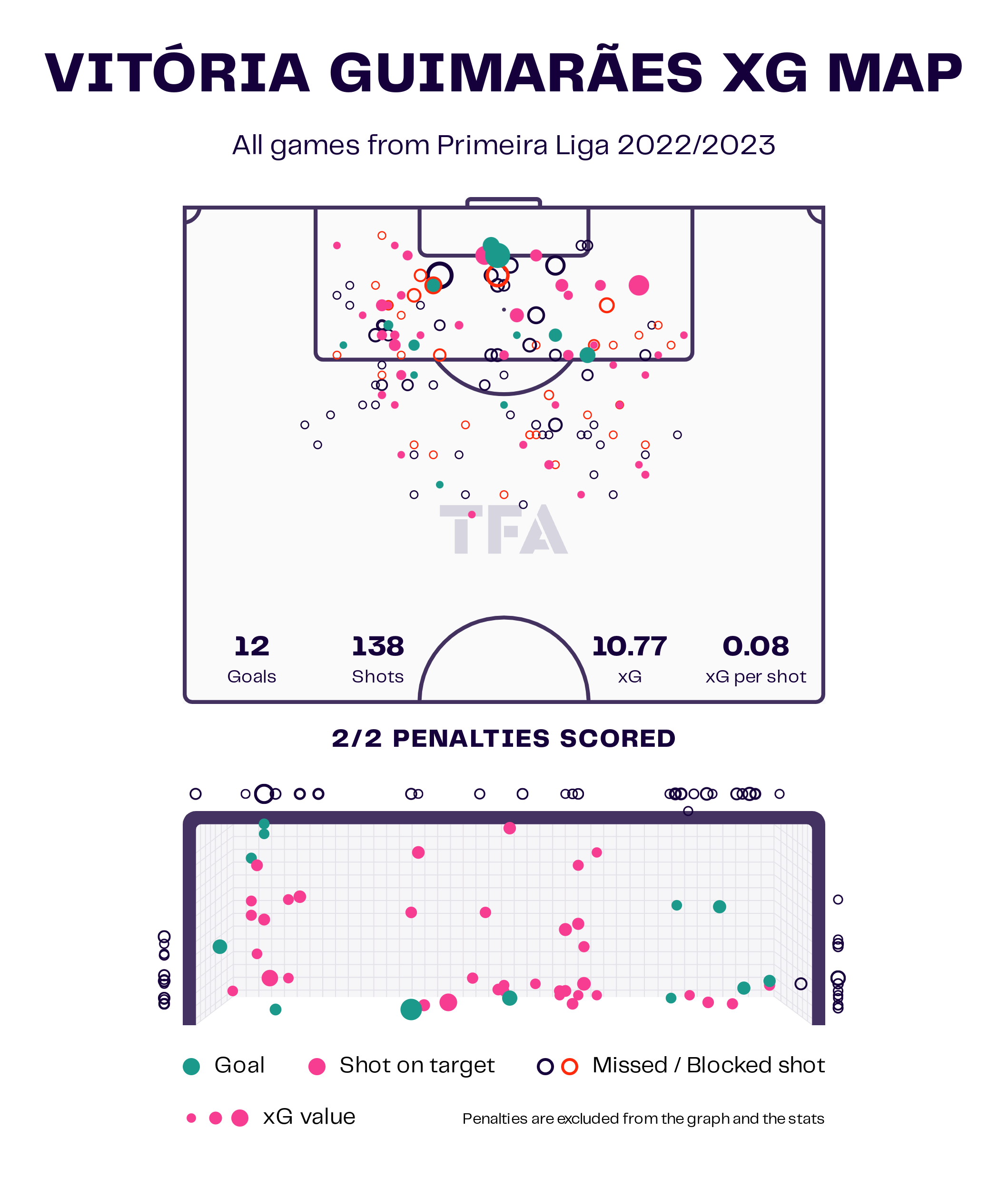 Vitoria have scored 14 goals this season with an xG count of 10.77 (excluding two penalties). Nine of these goals have come in home games, with an average xG rate of 1.02. Meanwhile, they have only managed to score five goals away from home, averaging 0.88 xG. The team takes 11.07 shots per match with an accuracy rate of 34.7%. For home fixtures, this number stands at 10.71 shots with 38.7% accuracy. Alternatively, Vitoria averages 11.43 shots per away match with a lower accuracy of 30%.

The viz above shows Vitoria’s heat map from Liga Portugal 2022/23. We can see that the team has done well to score most of their goals from inside the penalty area. However, a good proportion of their shots, both inside the box and from a distance, can be observed as missing the target or being blocked. 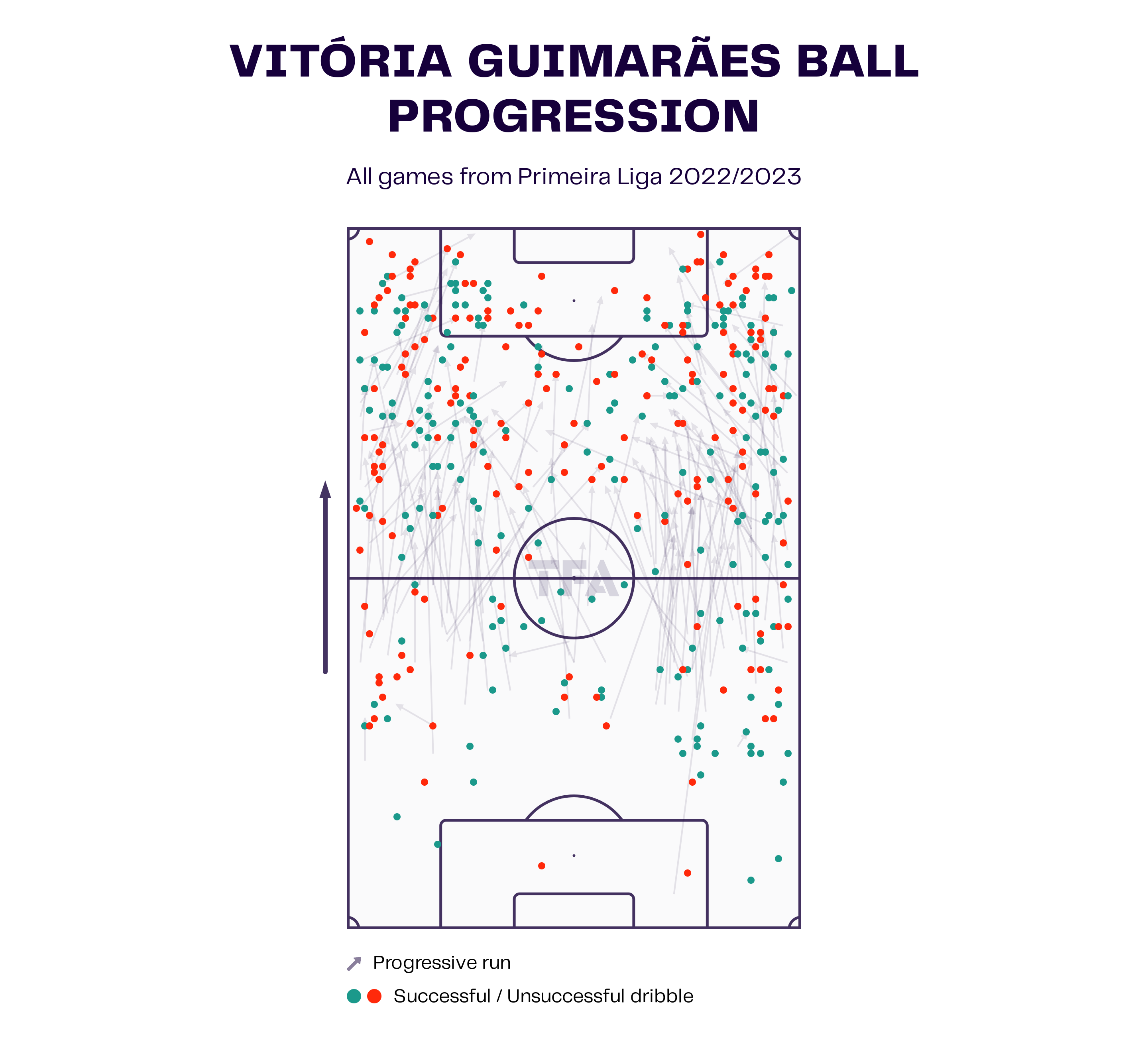 The above viz represents the overall ball progression by Vitoria de Guimaraes this season. We can observe the team’s significant utilisation of the two flanks to progress up the pitch. They can also be seen using the central zones to move forward, but less frequently. They create 26.5 positional attacks per match, with 22.1% of such attacks resulting in shots. On the other hand, they launch 1.86 counterattacks per match, with 23.1% of them ending with a shot. 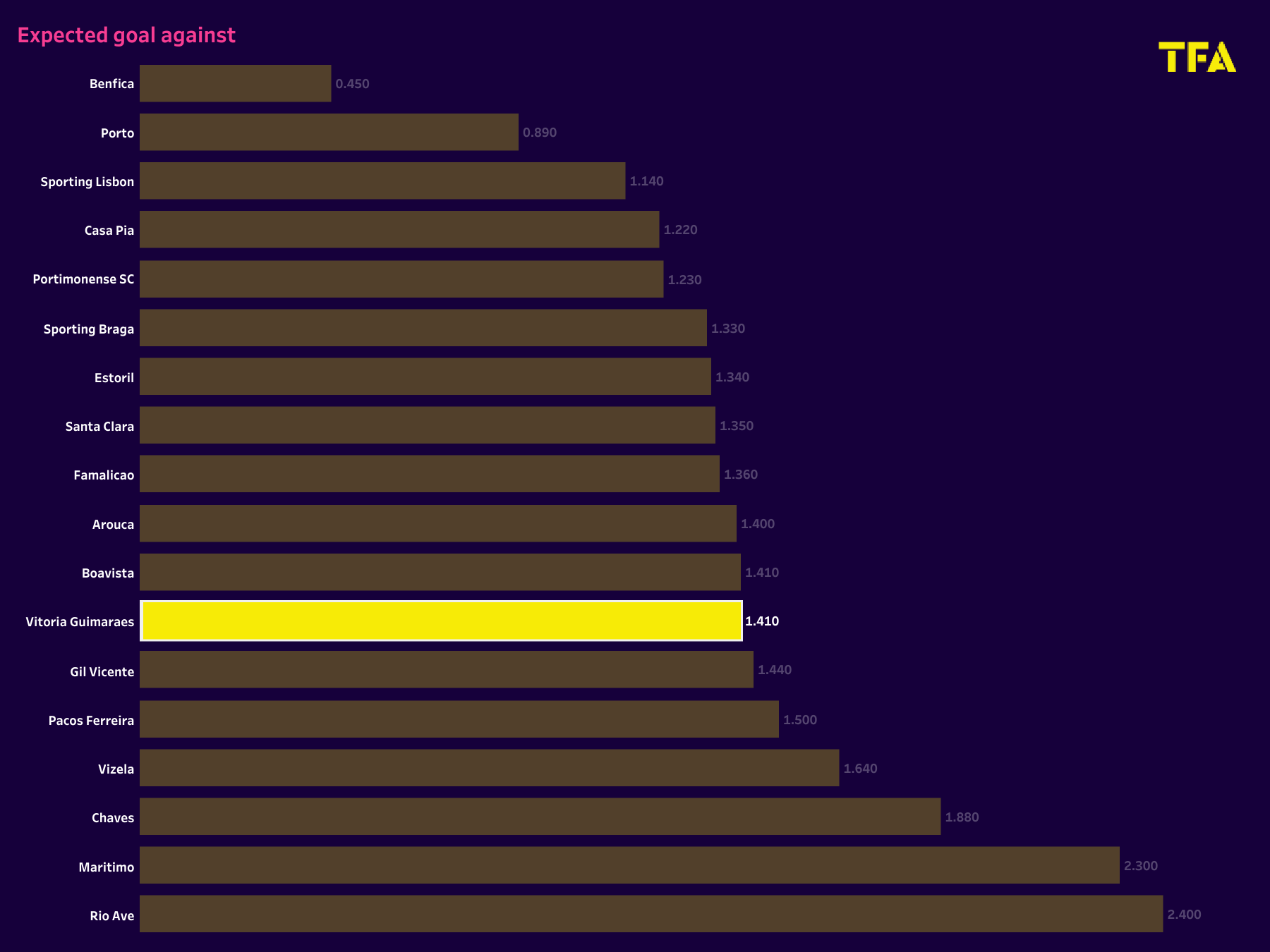 Vitoria SC have given up 16 goals this season and has a -2 goal difference. They have conceded at the rate of 1.14 goals per match, averaging an xGA rate of 1.11. The team has conceded just five goals at home with an xGA rate of 0.72. On the other hand, their defensive record has been poor in away fixtures having conceded 11 goals with a much higher xGA average of 1.5. 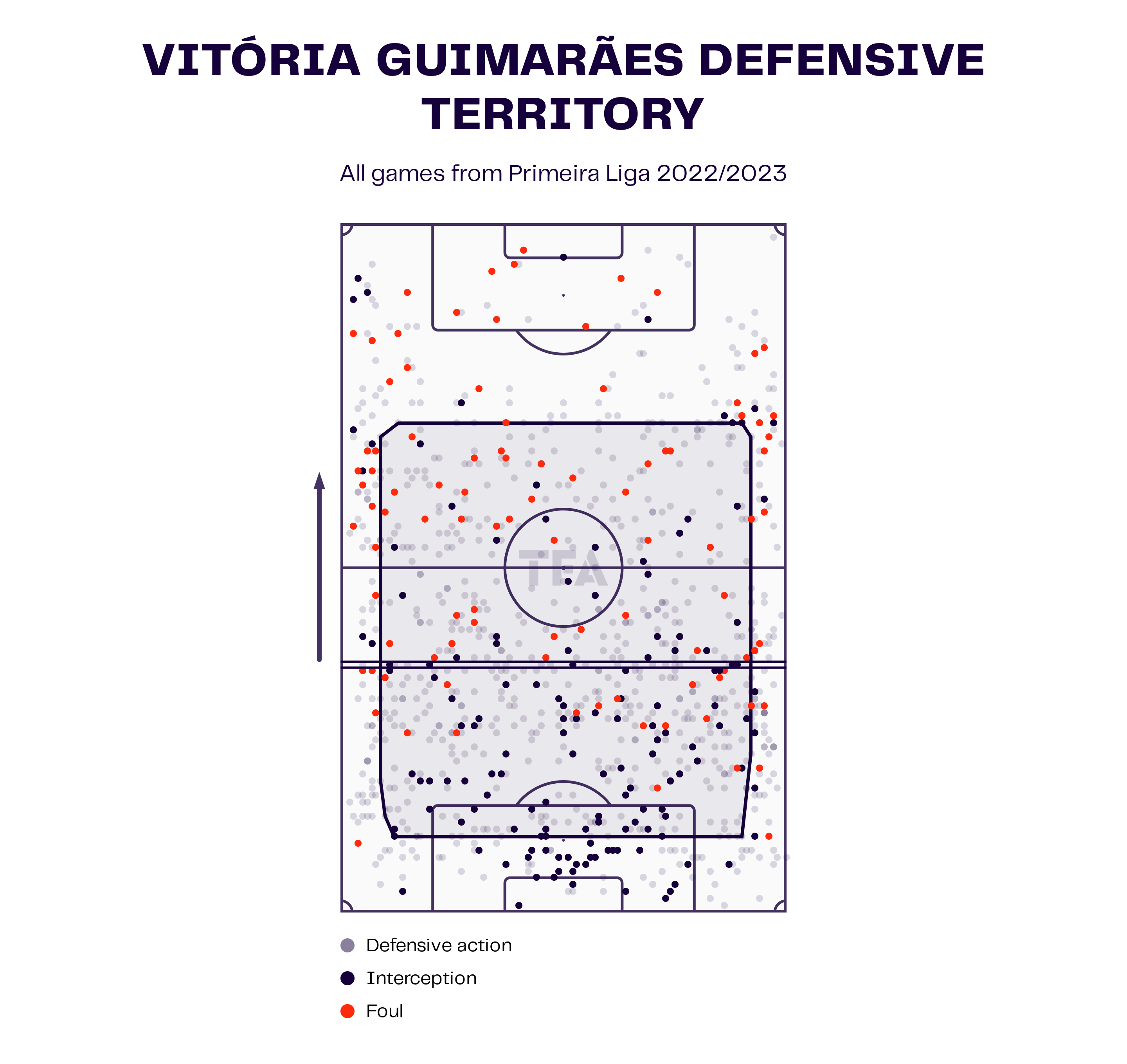 Additionally, Vitoria wins 65% of defensive duels and 39.6% of aerial duels at home. These percentages decrease to 56.6% and 48%, respectively, when they are on the road. This points to the team’s better defensive displays when they play at home.

Vitoria de Guimaraes has been better in both attack and defence in their home fixtures. There is room for improvement in their away record. But they will want to continue with this same impressive form at the Estádio D. Afonso Henriques for the rest of the season to remain in Europa League contention.