The race for Liga Portugal 2022/23 is far from over. Benfica currently leads the charge with an eight-point lead over defending champions FC Porto, as some other rivals chase them for the title. One of the teams to have emerged as a surprise package is newcomers Casa Pia A.C. from the second division. Sitting fifth in the league table, Os Gansos could play European football next season by retaining their position. They have won seven, drawn two, and lost four matches, courtesy of their sturdy defence. Casa Pia have conceded the third-lowest number of goals and kept seven clean sheets. A promising start to the season has raised their hopes of clinching a top-six finish. We now look at some stats that show why Casa Pia have a good chance of playing in Europe next season. 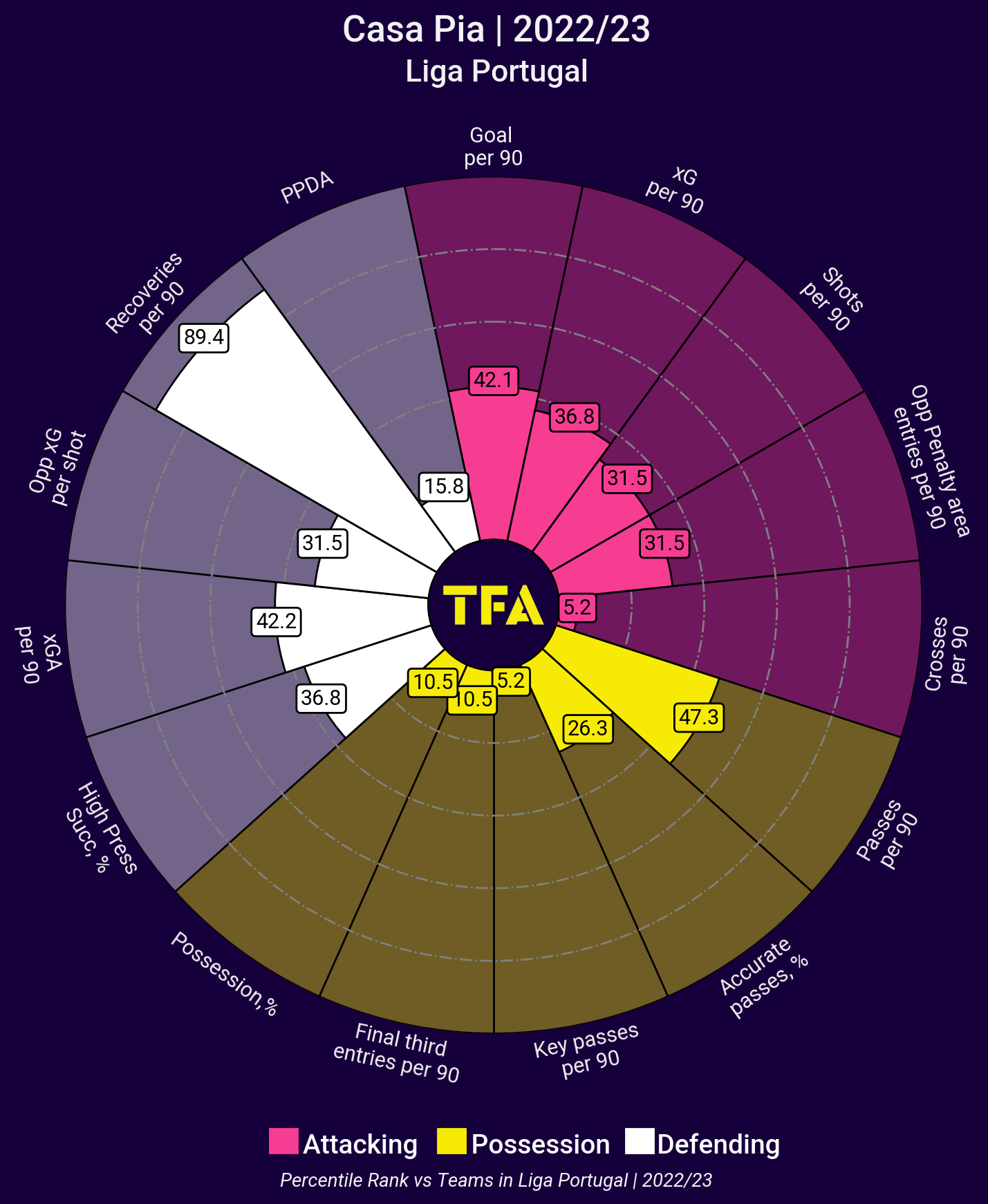 Casa Pia were on a good run of form at the start of the season. But in the last five matches, their form has taken a dip, with 2 wins and three defeats. Filipe Martins’ men have scored 13 goals in 13 matches and conceded just 10. The above viz shows the percentile rank of the team in attacking, defensive, and possession stats compared to other teams in Liga Portugal 2022/23. We can observe that the team’s prime strength is in defence. Meanwhile, they will be hoping to improve their attacking and possession stats. Casa Pia is the ultimate underdog this season, but the players are all motivated to fight together for their exciting young manager and obtain results.

Manager Filipe Martins focuses on organisation with a conservative approach, but not without an effective pressing style. His attackers start the press after losing possession with the midfielders backing them up quickly. They allow their opposition to keep possession but force them to play out wide. This is when they anticipate the move and intercept the balls played out wide. 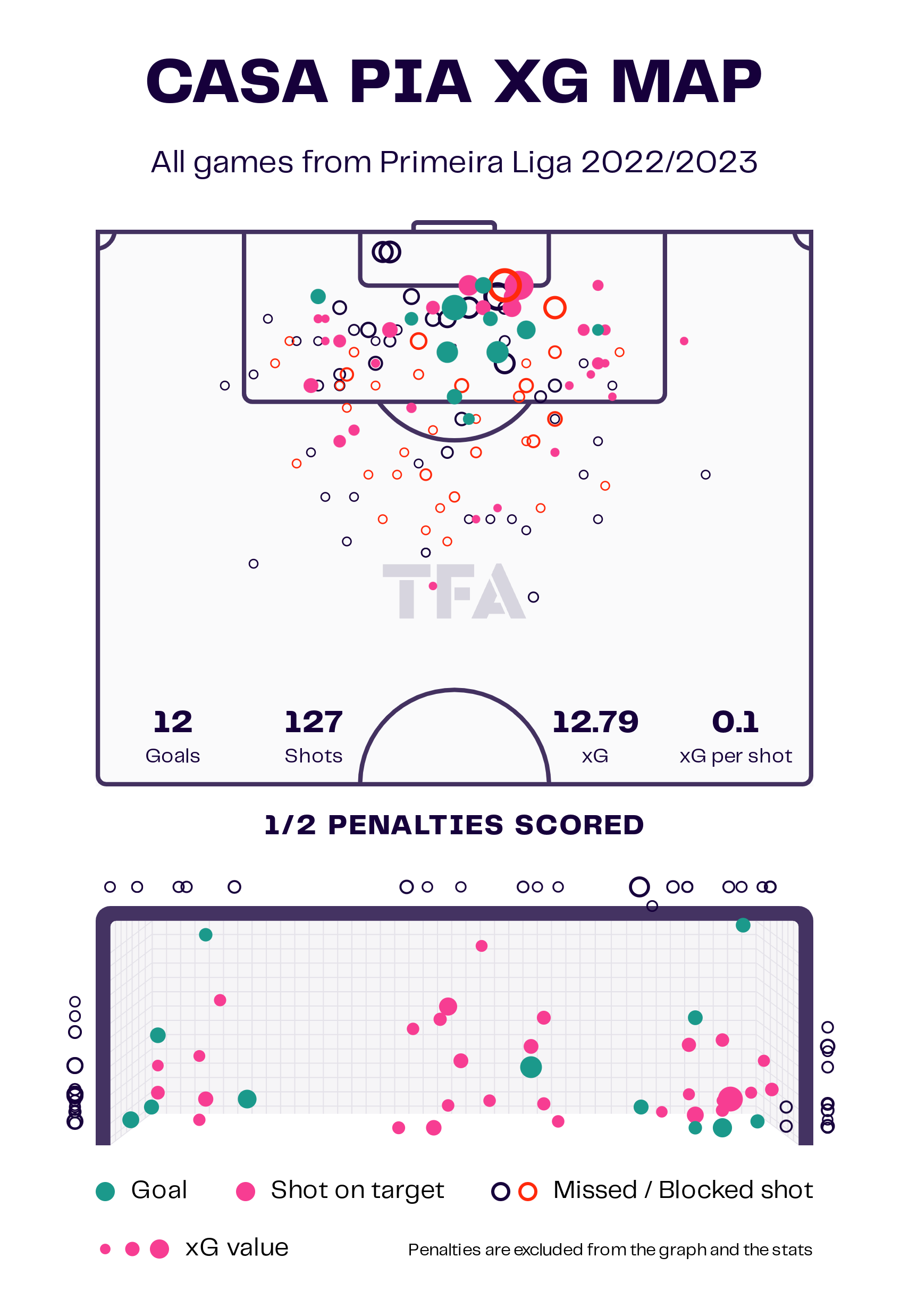 The 13 goals scored by Casa Pia are among the lowest in the league table’s top half. Their average of 1.0 goals per game is almost at par with their xG of 0.99 per match. The above viz shows the shot map of the team in the current season. We can observe that Os Gansos have scored all their goals from outside the 6-yard box. They average 10.3 shots per match, with 29.9% of them landing on target. The team seems inefficient at taking shots from dangerous areas inside the penalty box, which explains their low output of goals. The team also has a 50% rate of penalty conversion, scoring one out of the two awarded. 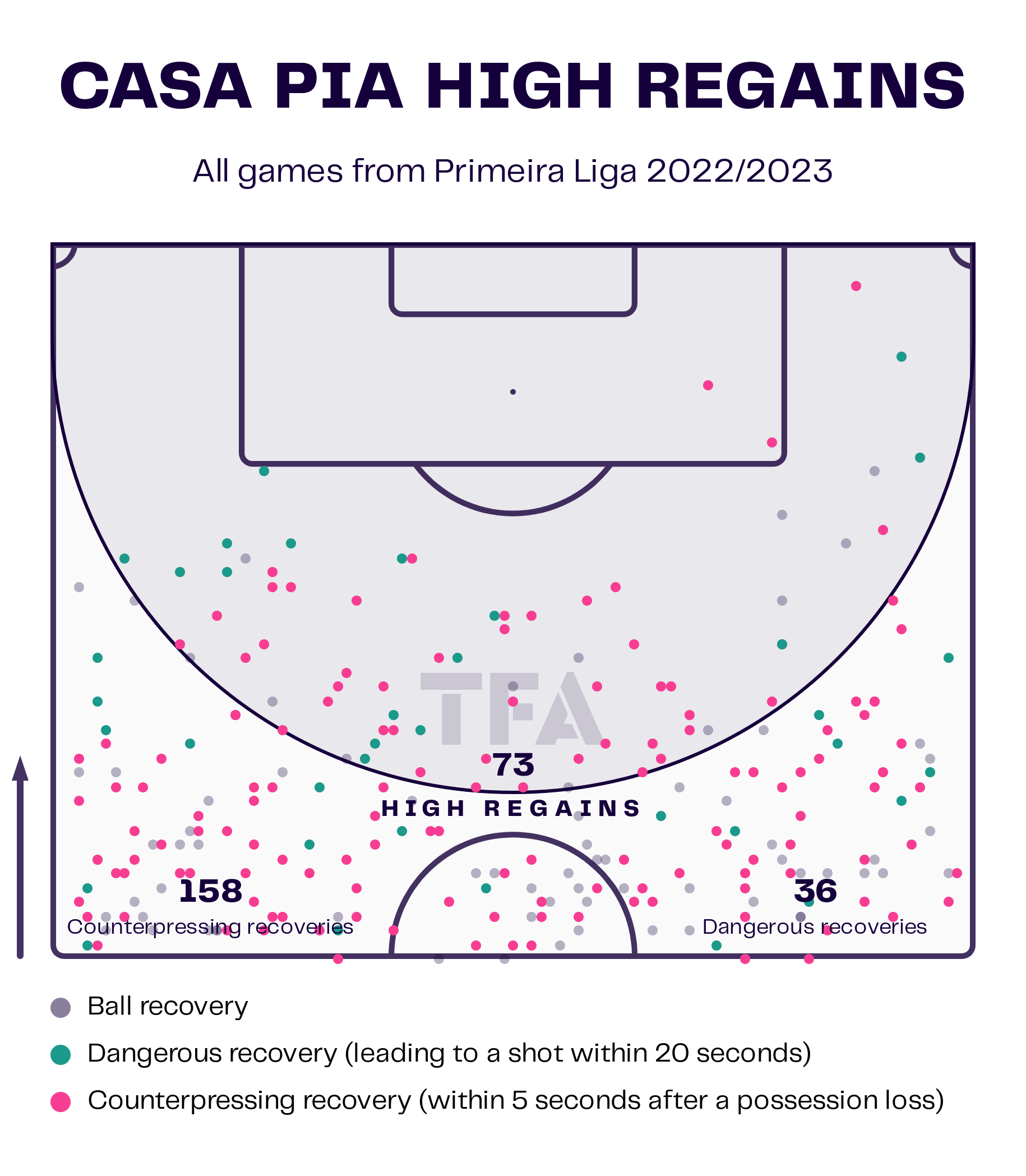 Being underdogs to most other clubs in the top division, the newly promoted team have underwhelmed in their attacking department. Casa Pia has managed 73 high regains and 36 dangerous recoveries. The maximum concentration of these recoveries is in the midfield area. There is an apparent lack of recoveries in the opposition penalty area, which again explain the mediocre numbers in their attacking parameters. 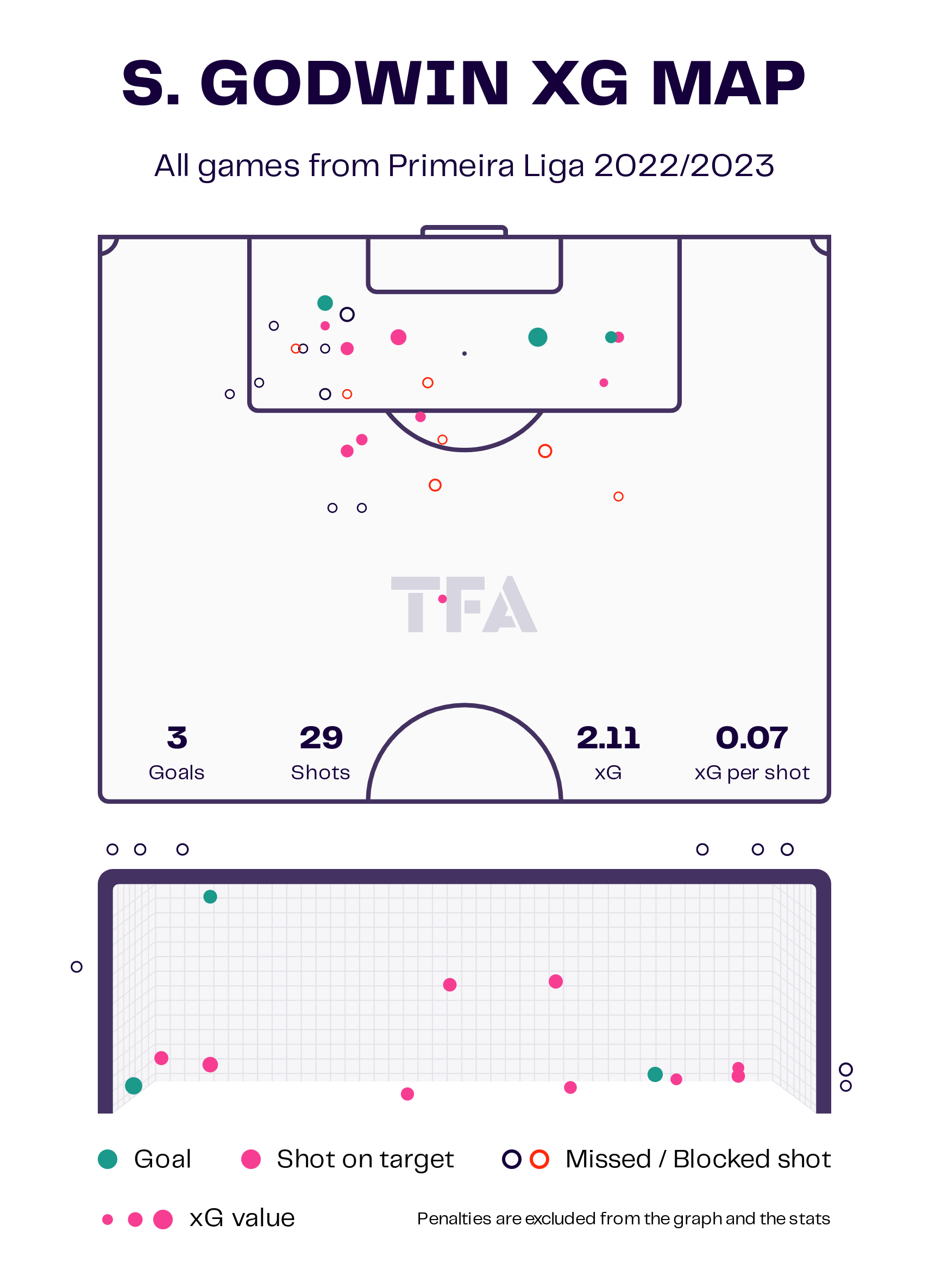 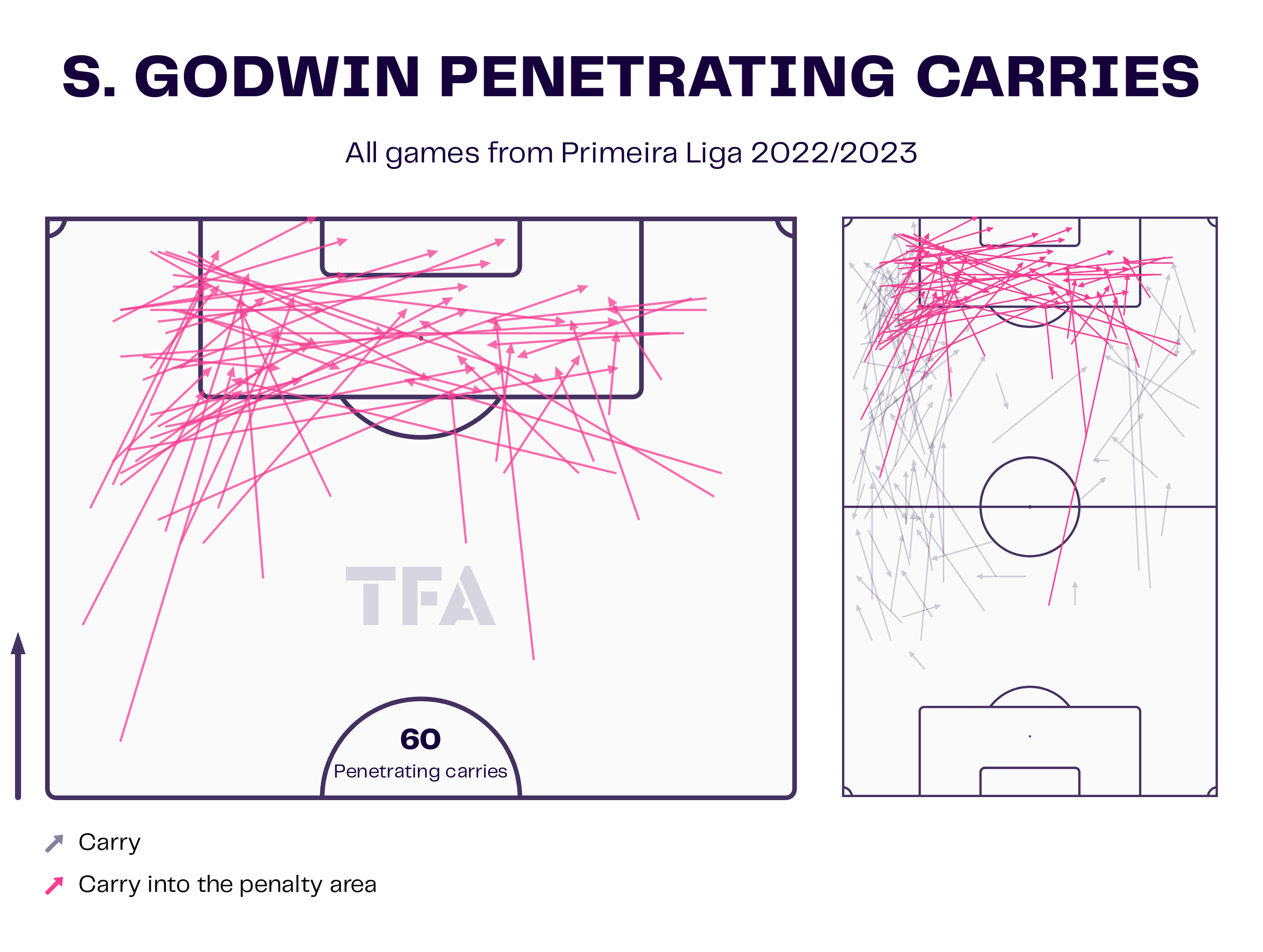 Nigerian Saviour Godwin has been the key player in Casa Pia’s attacking line. The 26-year-old winger has scored three goals and provided one assist in 13 appearances. He is currently the team’s leading goalscorer. He has also taken the most number of shots for the team, with 2.36 shots per match and almost 38% of them on target. Deployed on the left wing, Godwin’s attacking approach is direct and he relishes a duel. Additionally, the speedster has made 60 penetrating carries into the opposition penalty area. A right-footed player, he demonstrates a proclivity to burst forward and attack spaces inside the penalty area from wide positions. 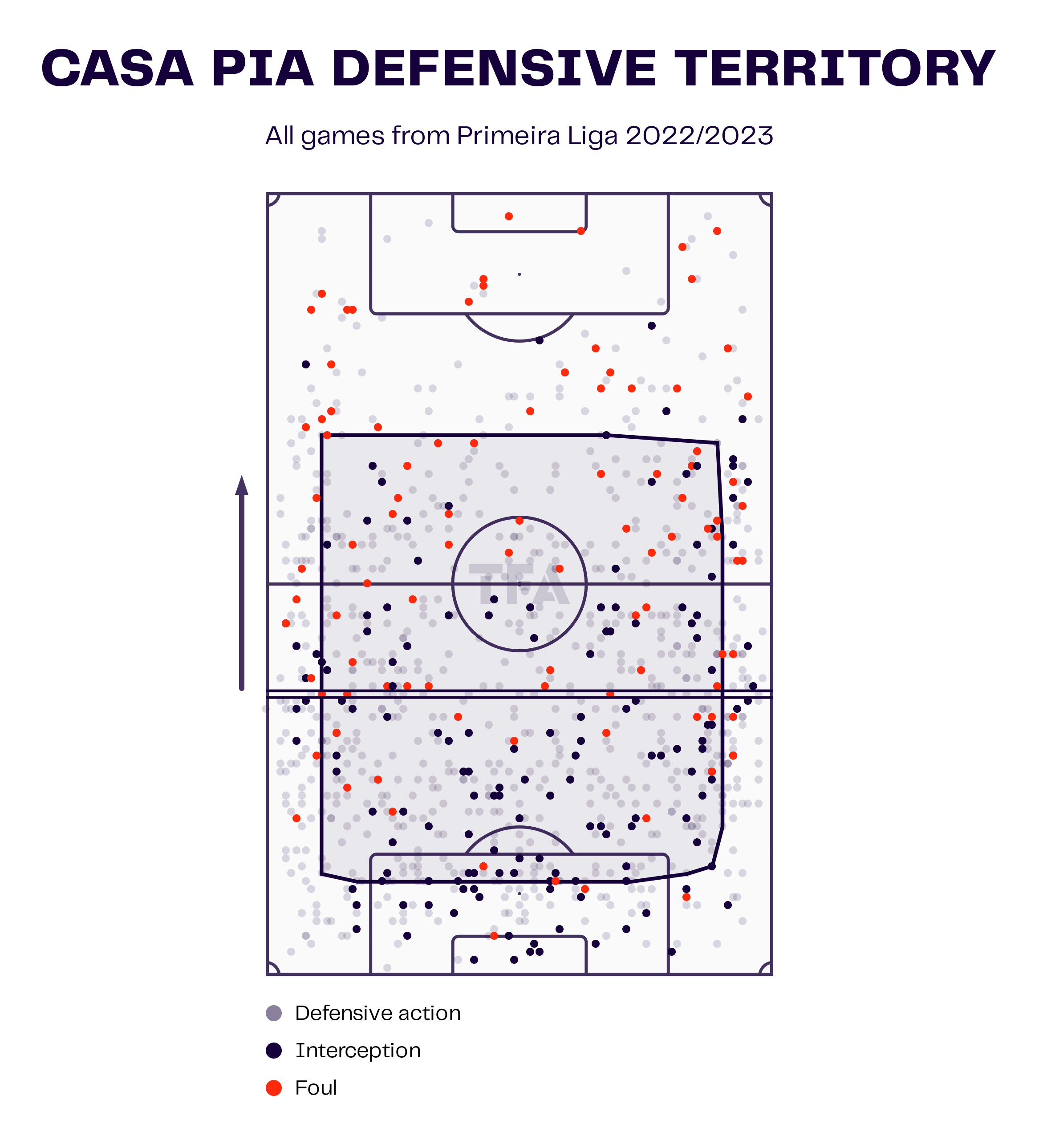 Perhaps the most impressive thing about this Casa Pia side is how sound they are in defence. The 10 goals conceded by Filipe’s men are the third-lowest in the league. They concede an average of only 0.77 goals per game, which is much less than their current xGA per match of 1.3. Furthermore, the team has managed to keep 7 clean sheets in 13 matches, the joint second-highest in the league.

The above viz depicts the team’s defensive territory this season. Casa Pia give away 14.8 fouls and make 10.8 interceptions per match, both figures being significant in comparison to other teams. They have also shown the inclination to commit fouls in their defensive areas, resulting in four penalties conceded. 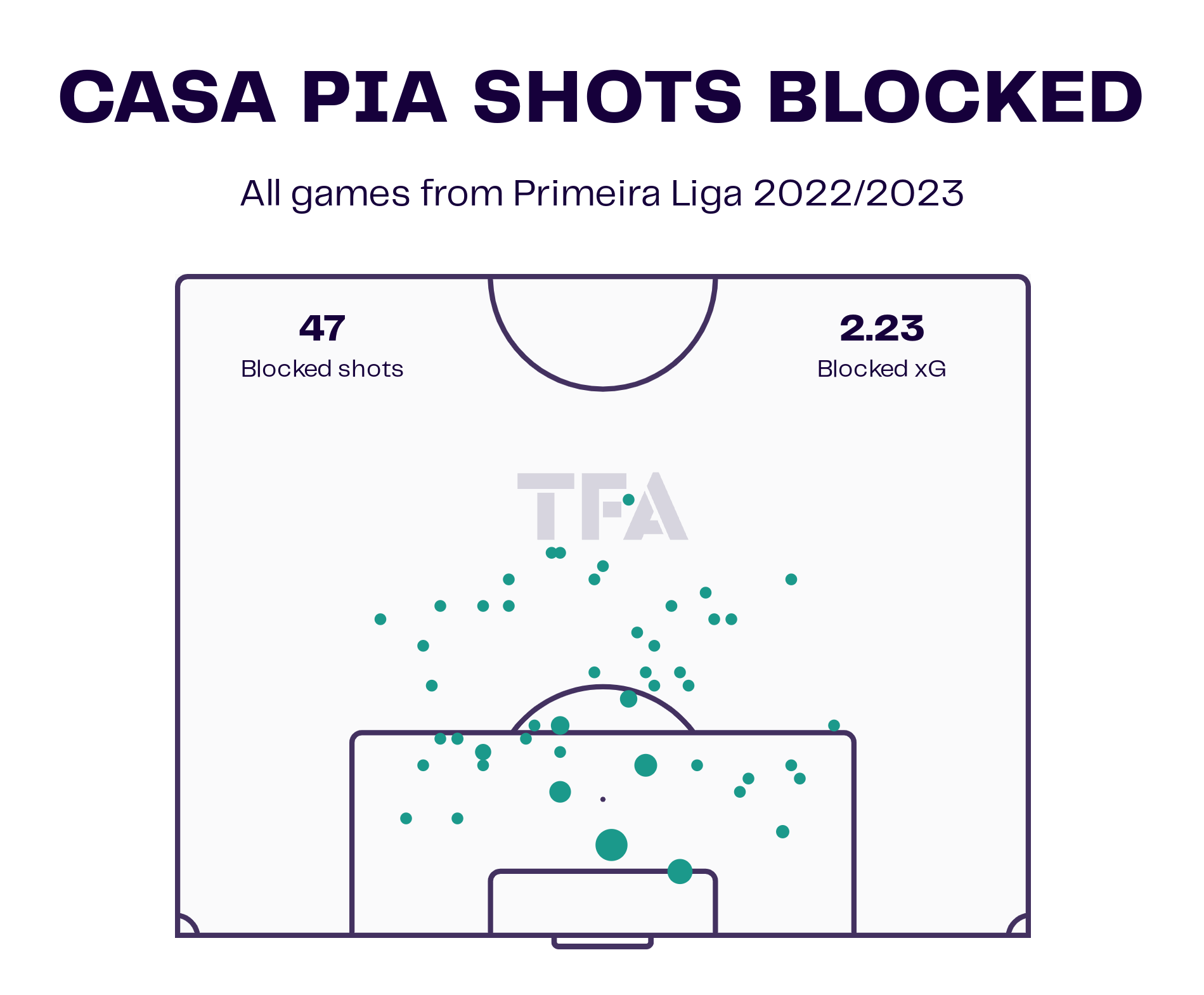 Casa Pia’s defenders have put their bodies on the line and blocked 47 shots, the third-highest currently. With a 2.23 xG of these shots, a good chunk of the blocks were made inside their penalty box and have been crucial.

One of the players who has been exceptional at the back is club captain Vasco Fernandes, who plays at the heart of the back three. The 36-year-old veteran defender has made 19 crucial blocks, a handful of them around the 6-yard box. This shows the commitment and willingness of the players to work hard and carry their team towards a top-six finish as the ultimate underdogs.

Veteran goalkeeper Ricardo Batista has made 39 saves with an impressive save percentage of 84.3. Summer signing Takahiro Kunimoto and Brazilian forward Clayton have clicked together in attack, contributing with goals and assists. These key contributions have helped the team occupy the fifth position in the Liga Portugal table.

Casa Pia displayed superb form in the early stages of the season and they will be eager to put in similar quality and levels of performance after the international break. Their main strength is their sturdy defence which has earned them many crucial points. Felipe Martins will hope that these players stay at the top of their game and secure European qualification for next season.