FC Porto striker Mehdi Taremi is one of the stars of Liga Portugal. During his debut season in 2019/20 with Rio Ave, he was the league’s joint-top scorer before Porto came calling. Since then, he has been consistently banging in goals in the Portuguese top flight. Last season, Taremi played a pivotal role in his club’s title-winning run by scoring 20 goals and assisting 12 more.

The Iran international also impressed at the 2022 FIFA World Cup, scoring twice against England and setting up a goal against Wales in the group stages. His prolific goal-scoring record has earned him praise in England, with Chelsea and Arsenal keeping close tabs on him. We look at some important stats to understand why the 30-year-old striker is one of FC Porto’s prized assets. 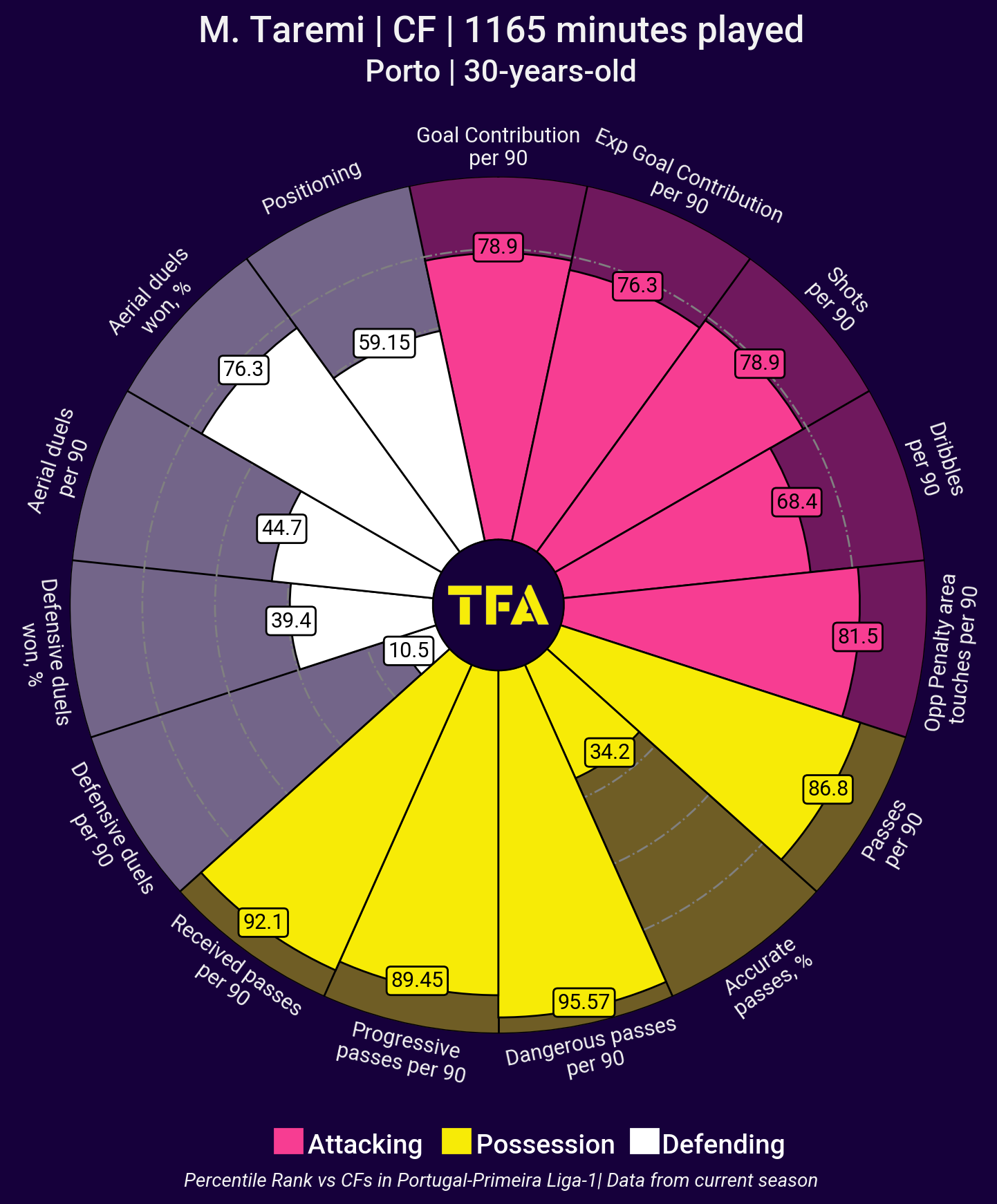 The above viz shows the percentile rank of Mehdi Taremi in attacking, possession, and defensive stats against other centre-forwards in Liga Portugal 2022/23. He ranks in the top 79 percentile for goal contributions per match and the 81.5 percentile for touches in the opposition penalty area. What’s surprising is the striker’s incredible passing stats, as he ranks in the top 86.8, 89.45, 92.1, and 95.57 percentiles, respectively, for passes, received passes, and progressive and dangerous passes. Standing at 6 feet, 1 inch, winning aerial duels is another trait of Taremi, as he is in the top 76.3 percentile for this parameter. 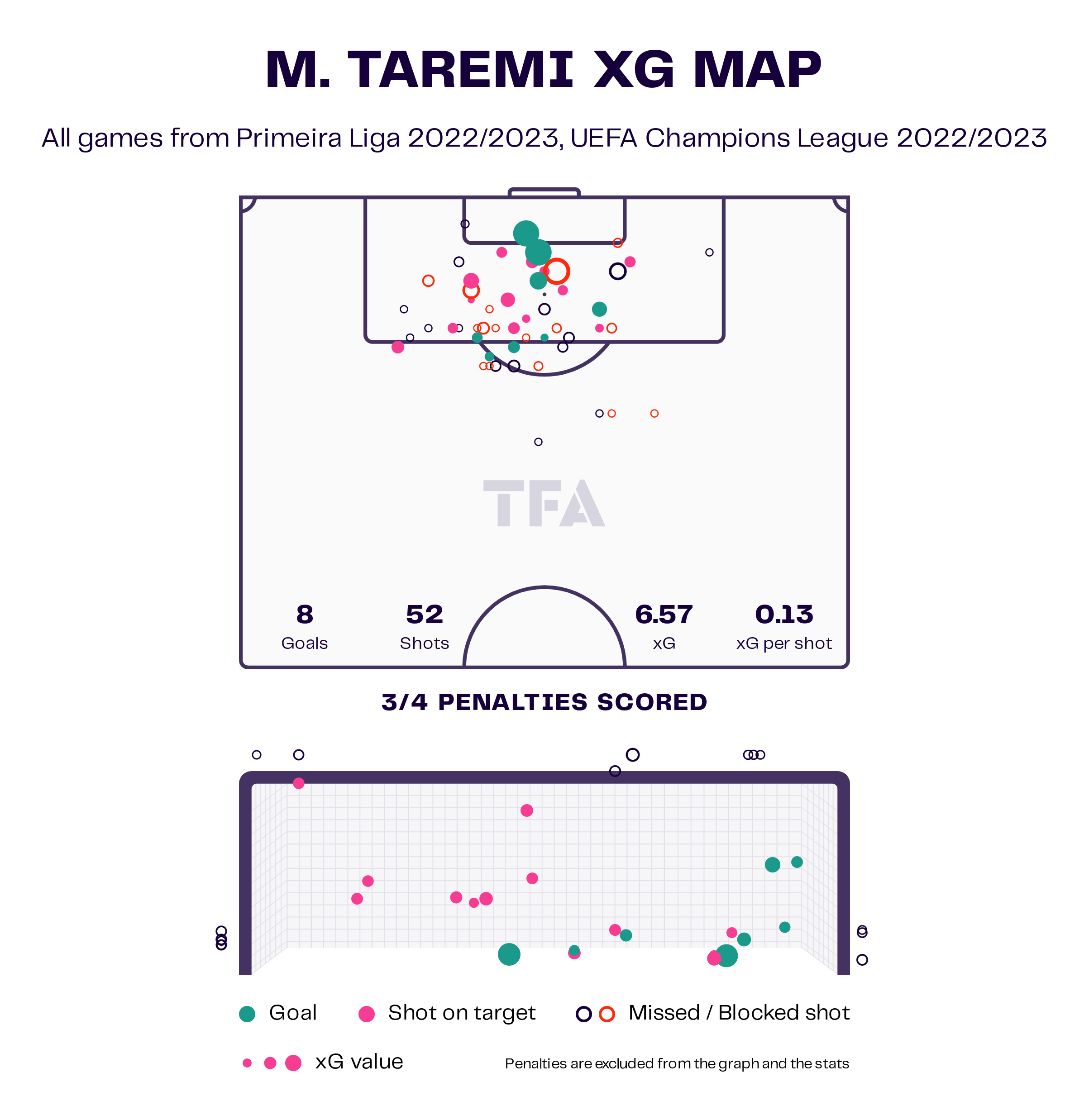 In 13 league appearances this season, Mehdi Taremi has found the back of the net six times along with five assists. He has five goals and two assists in five Champions League appearances so far. The centre-forward has also taken four penalties, converting three of them. As shown in the viz above, he has attempted 54 shots, the majority of which have come from inside the penalty box. Taremi takes an average of almost 3.0 shots per match in the league, with almost 42% of them on target. 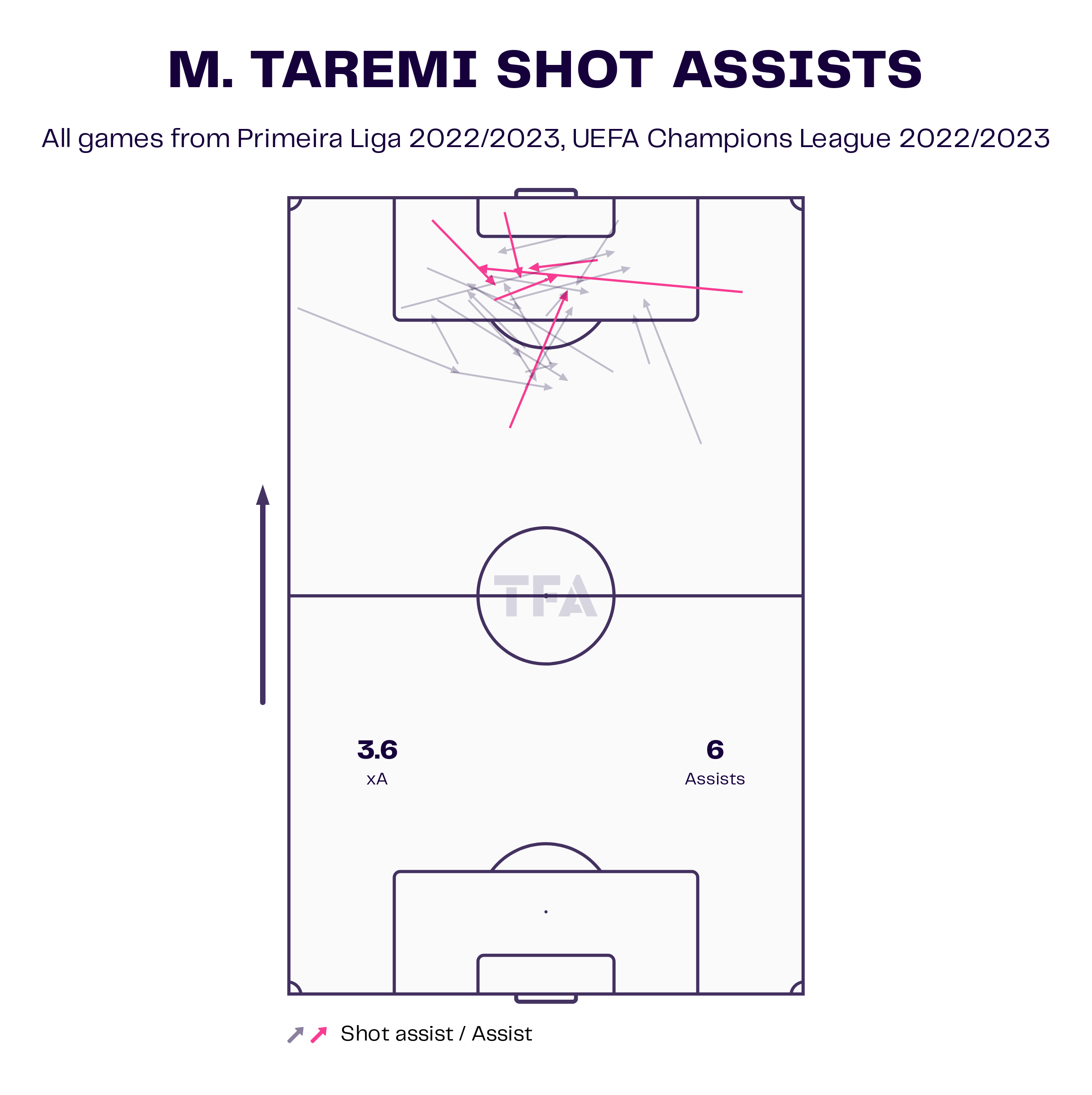 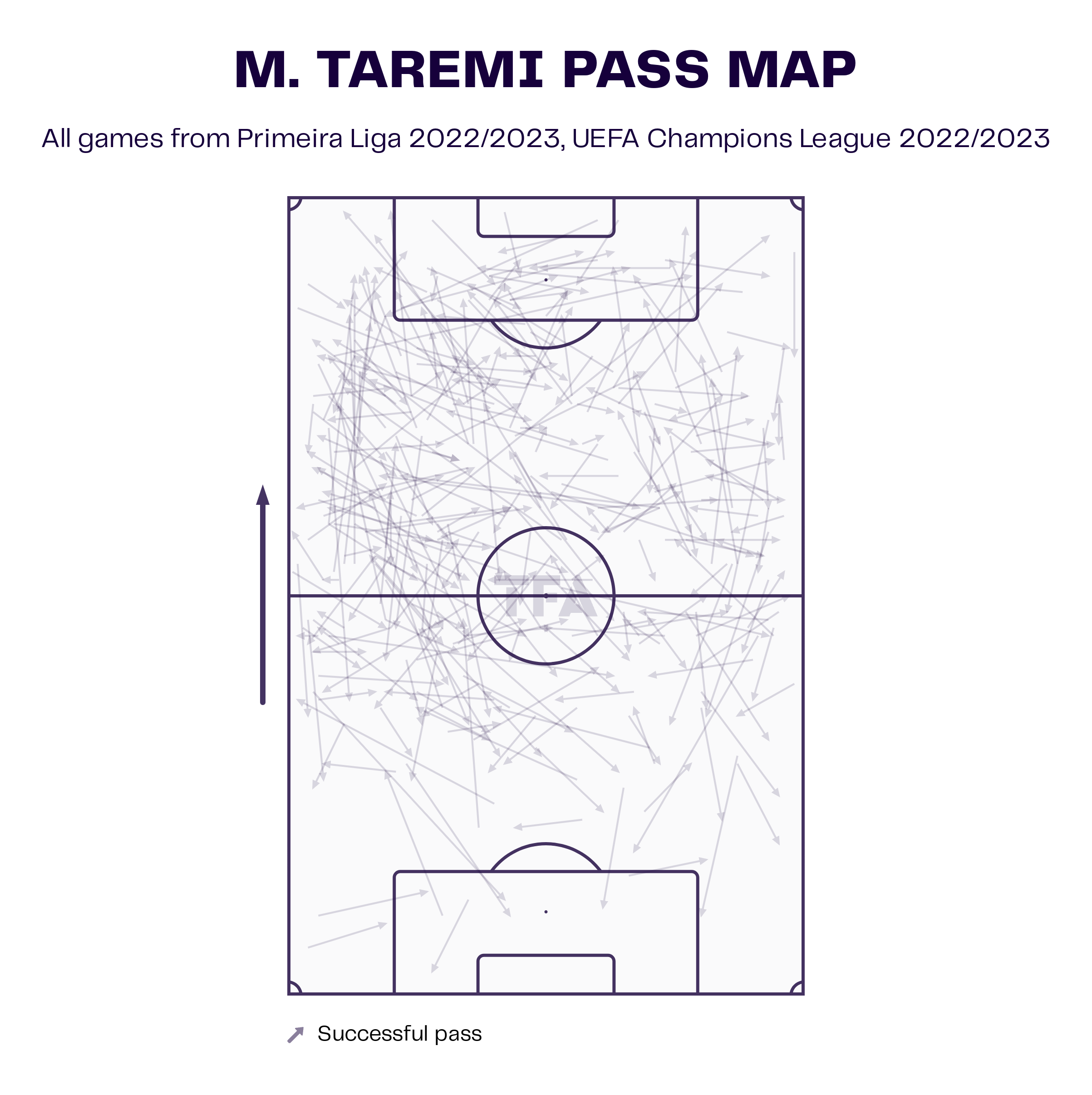 While Taremi features on the scoresheet often, he also possesses the ability to create chances for his teammates. The five assists he has are currently the most in the league, which compliments his versatile playing style. The striker makes 2.73 progressive and 1.74 key passes per match, which are among the highest in the Porto squad. He also makes 1.9 passes into the final third and completes 1.24 passes into the penalty box per match. Furthermore, Taremi takes 3.64 shots to create actions per match, the second highest among the Porto players.

More than just the main threat in the final third 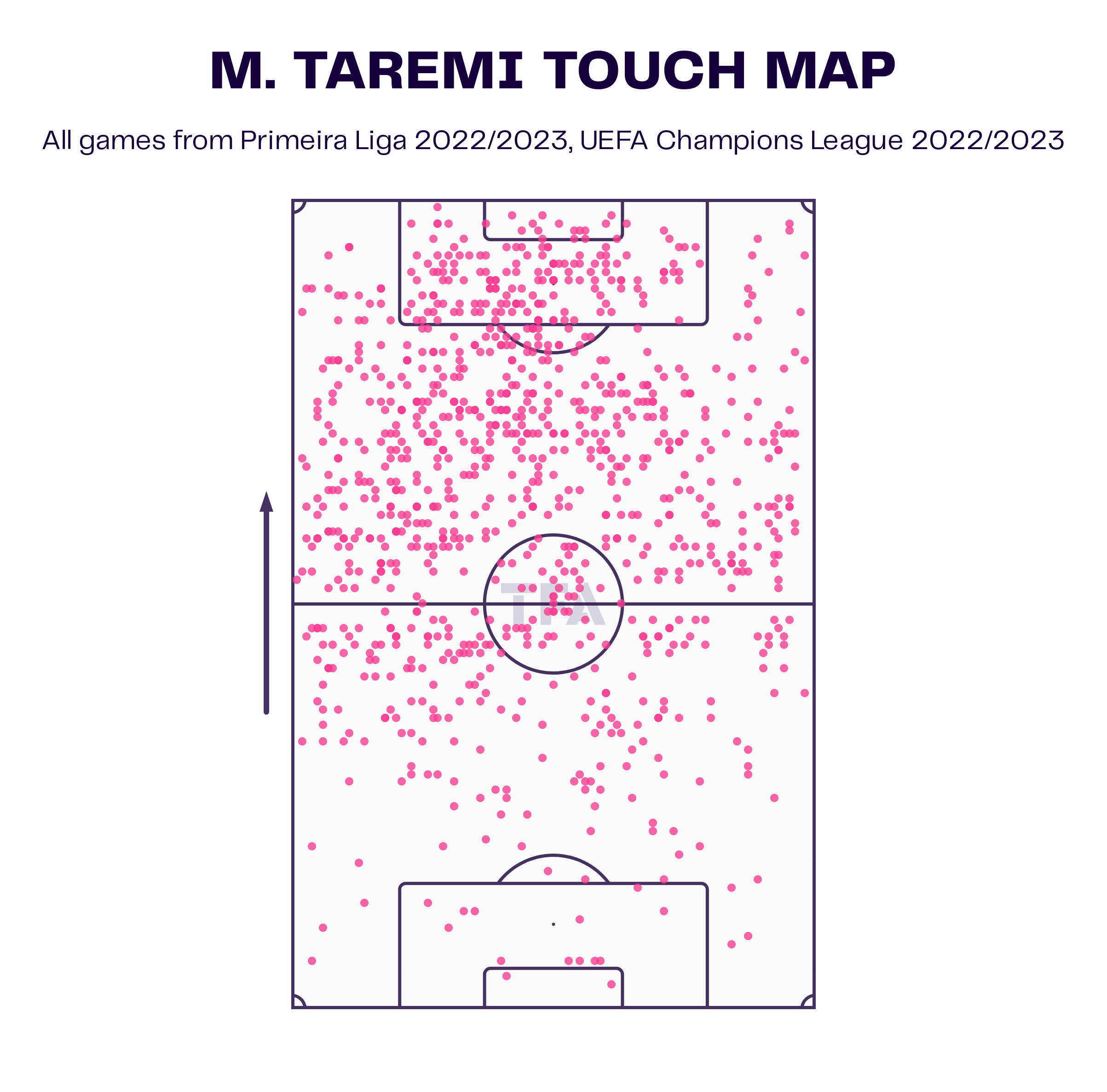 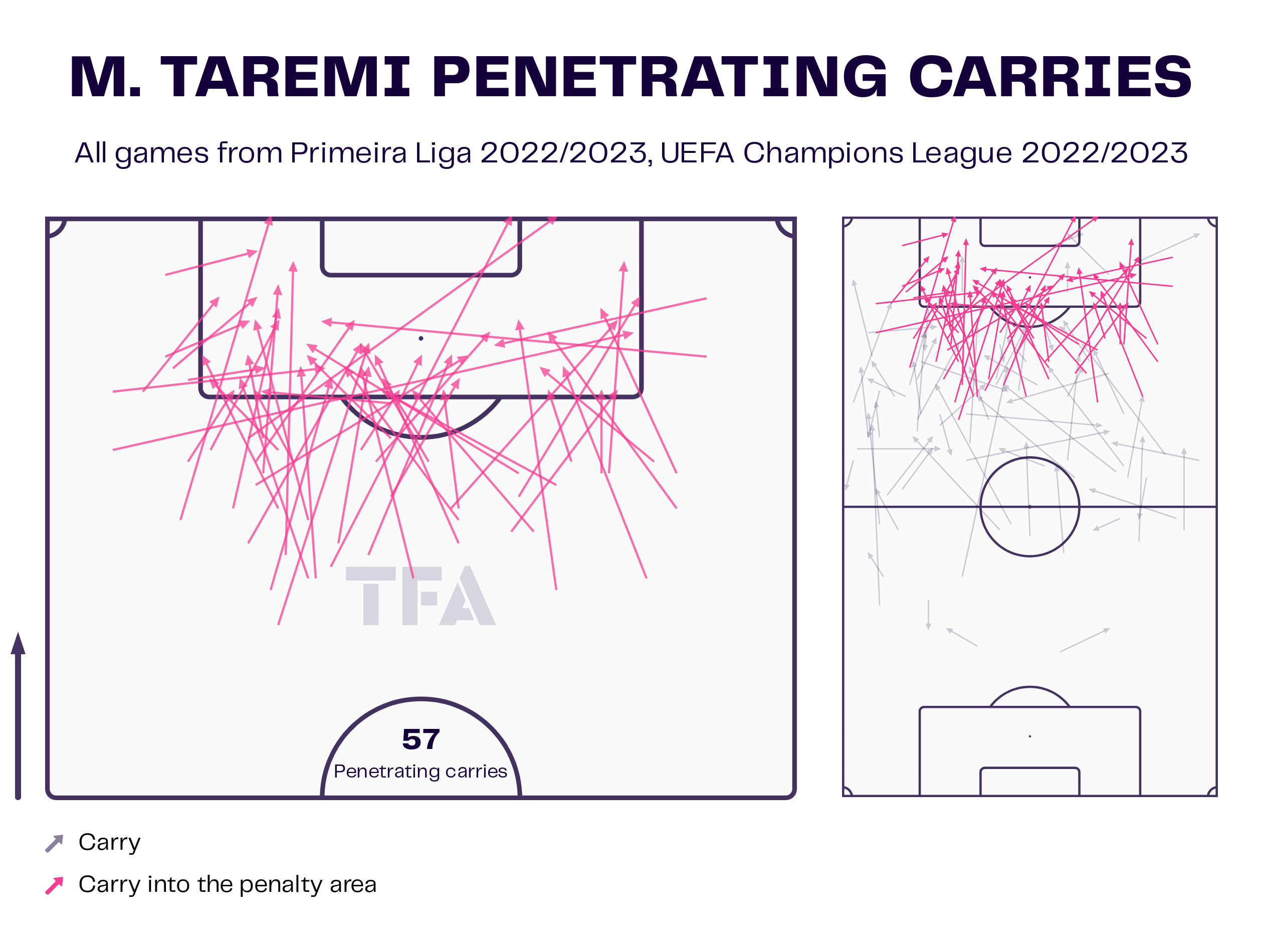 The 30-year-old striker is Porto’s focal point of attack in the final third. The viz above shows the players’ touch maps in major competitions this season. Taremi is averaging 38.4 touches per match, and around 6.30 of them are in the opposition’s penalty area. He also receives 27.9 passes from teammates, with 5.70 of them being progressive. The Iranian has the ability to hold up the ball and tends to move wide and drop deep to link up and build attacking plays. He is also adept at winning aerial duels and possesses a good defensive work rate.

Still, Mehdi Taremi is much more than just the target man for his team. We can see the type of penetrative movements he makes by looking at the viz above. Taremi has the affinity to attack the spaces inside as well as create additional spaces with his positional play. He has made an impressive 57 penetrating carries into the opposition’s penalty area. At the moment, he attempts 2.73 dribbles per 90 minutes, completing 45.5% of those successfully. 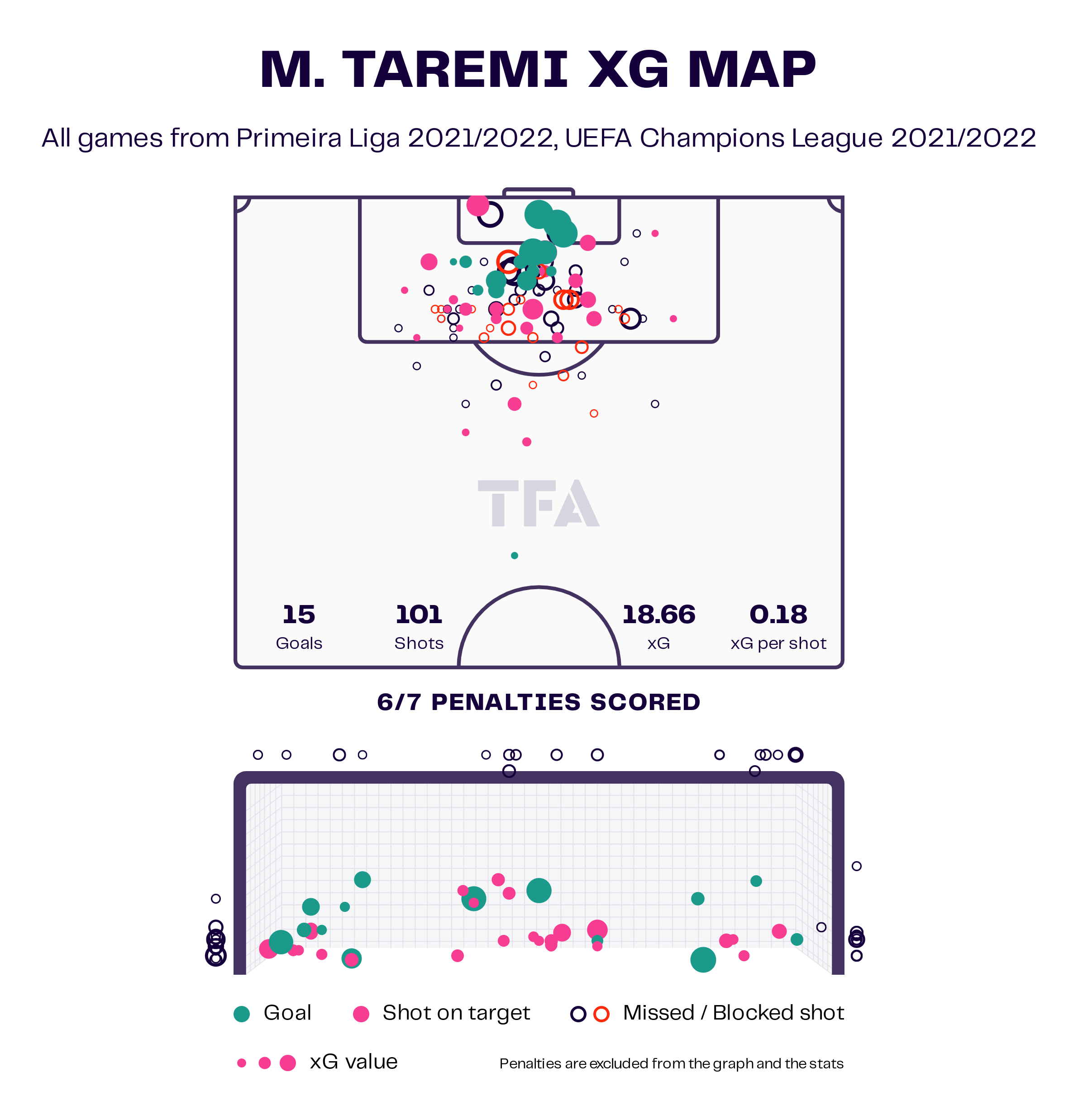 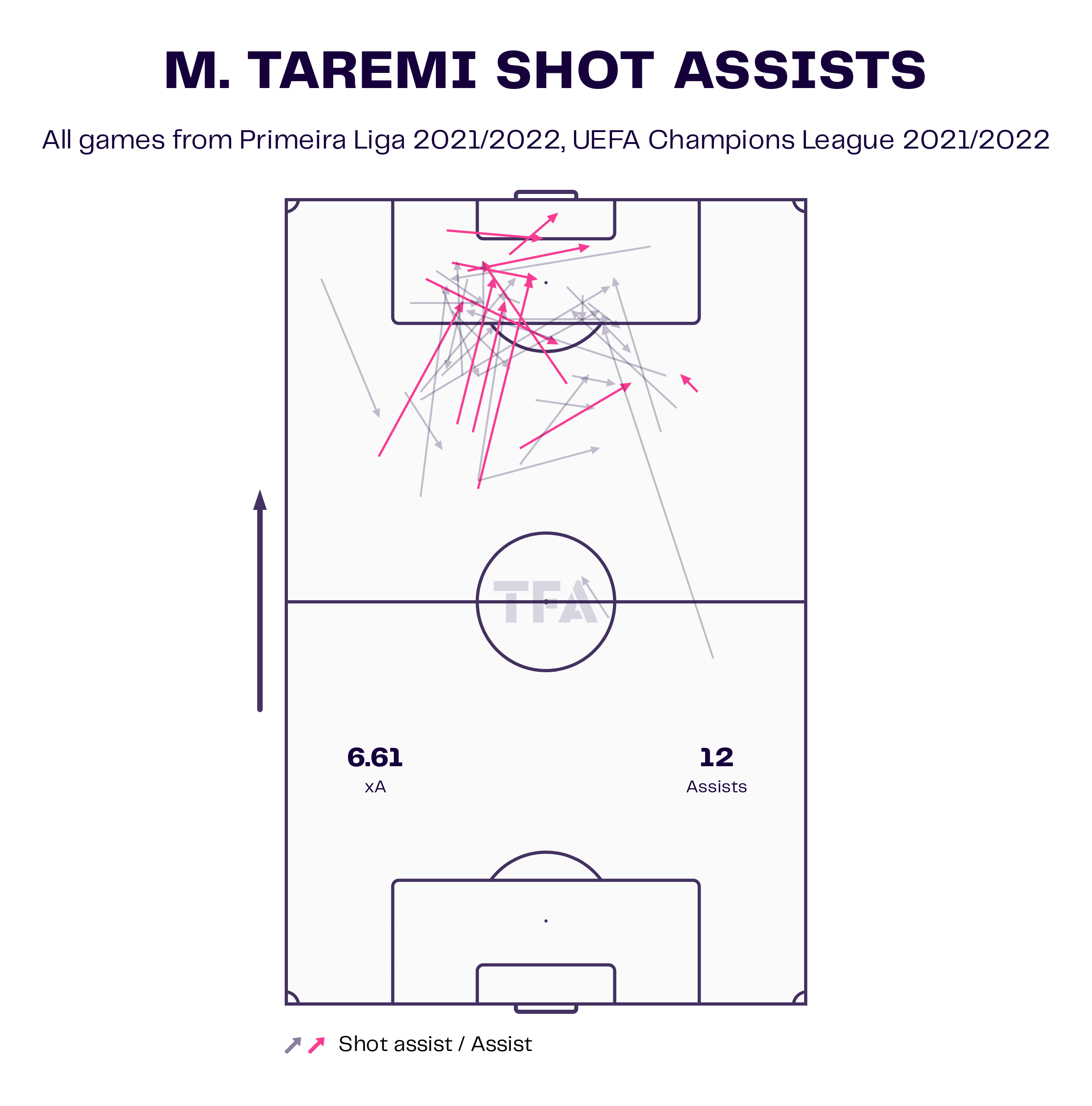 When compared to last season, Taremi made 32 appearances in the league, scoring 20 goals along with 12 assists. The shot zones have been a bit similar, but the conversion rate and scoring frequency are slightly lower. Meanwhile, the passing and possession stats have progressed slightly since last season in areas like touches, key passes, and dribbles. This highlights the center-forward’s more versatile and creative role outside of scoring goals.

Mehdi Taremi has been Porto’s star player over the last two seasons. His aerial presence matches his cunning goal instinct—attributes seen in some of the top-class strikers in the game. A technically gifted player, he has a superb finishing ability and a physicality that enables him to hold off defenders. His ability to link up play allows him to drop deep and pick out teammates with exquisite passes. FC Porto will be hoping for the same levels of consistency from their star striker in their push for consecutive Liga Portugal titles.