Tiago Gouveia is one of the latest young talents to grace Liga Portugal. Coming through the youth ranks of Benfica, he has represented the club’s youth teams since 2019, taking his time to develop and break into the scene. The Portuguese talent had an impressive season in the second division last year with ten goals and three assists. He was included in Benfica’s senior squad at the end of last season, making two appearances in Liga Portugal and getting one assist. This season, the Eagles loaned out their youngster to Estoril to further develop his talents with regular game time. Since then, Tiago Gouveia has nailed down a starting role in Estoril’s attack and is enjoying his first full season in Liga Portugal with two goals and four assists under his belt. Let’s now look at some stats that capture the 21-year-old’s impressive performances in Liga Portugal 2022/23. 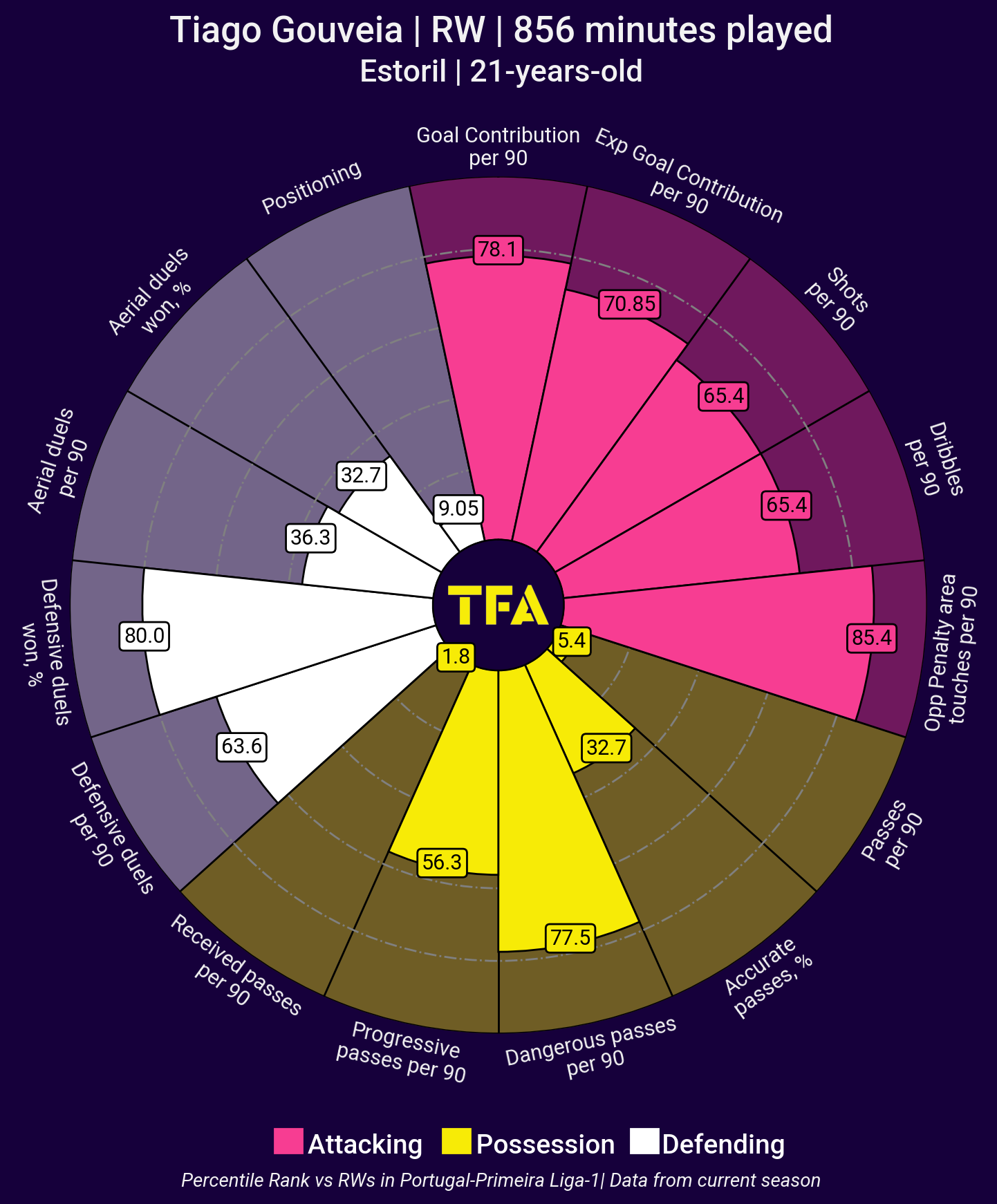 Tiago Gouveia has played ten league matches this season for Estoril, starting in all and averaging 81 minutes per game. The above viz shows the percentile rank of the player’s stats compared to other right-wingers in Liga Portugal. It can be observed that Gouveia ranks highly under attacking indicators like goal contribution, penalty area touches, shots, and dribbles per 90. While his overall passing records could be improved, he has a high percentile rank for dangerous and progressive passes. Another department where the youngster does well is winning defensive duels. 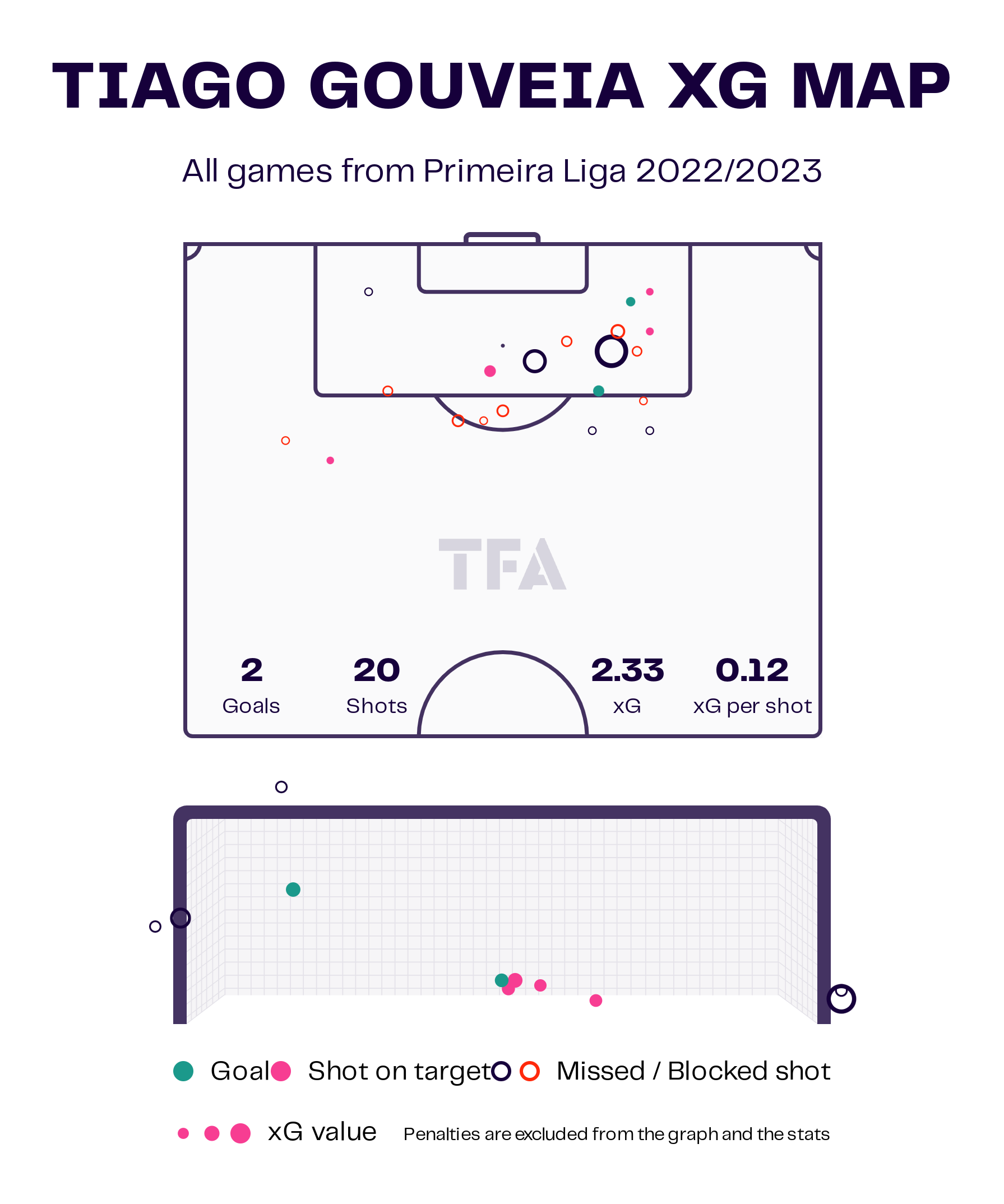 Tiago has scored two goals for Estoril so far this season, with an xG of 2.33. He is getting his returns at a rate of 0.21 goals per match with an average xG rate of 0.24. The viz above depicts Gouveia’s shot map from this season. He has attempted 20 shots with six on target, and they have been either from inside the penalty box or from the edges of the box. The 21-year-old takes an average of 2.1 shots per match with an accuracy of 30%. 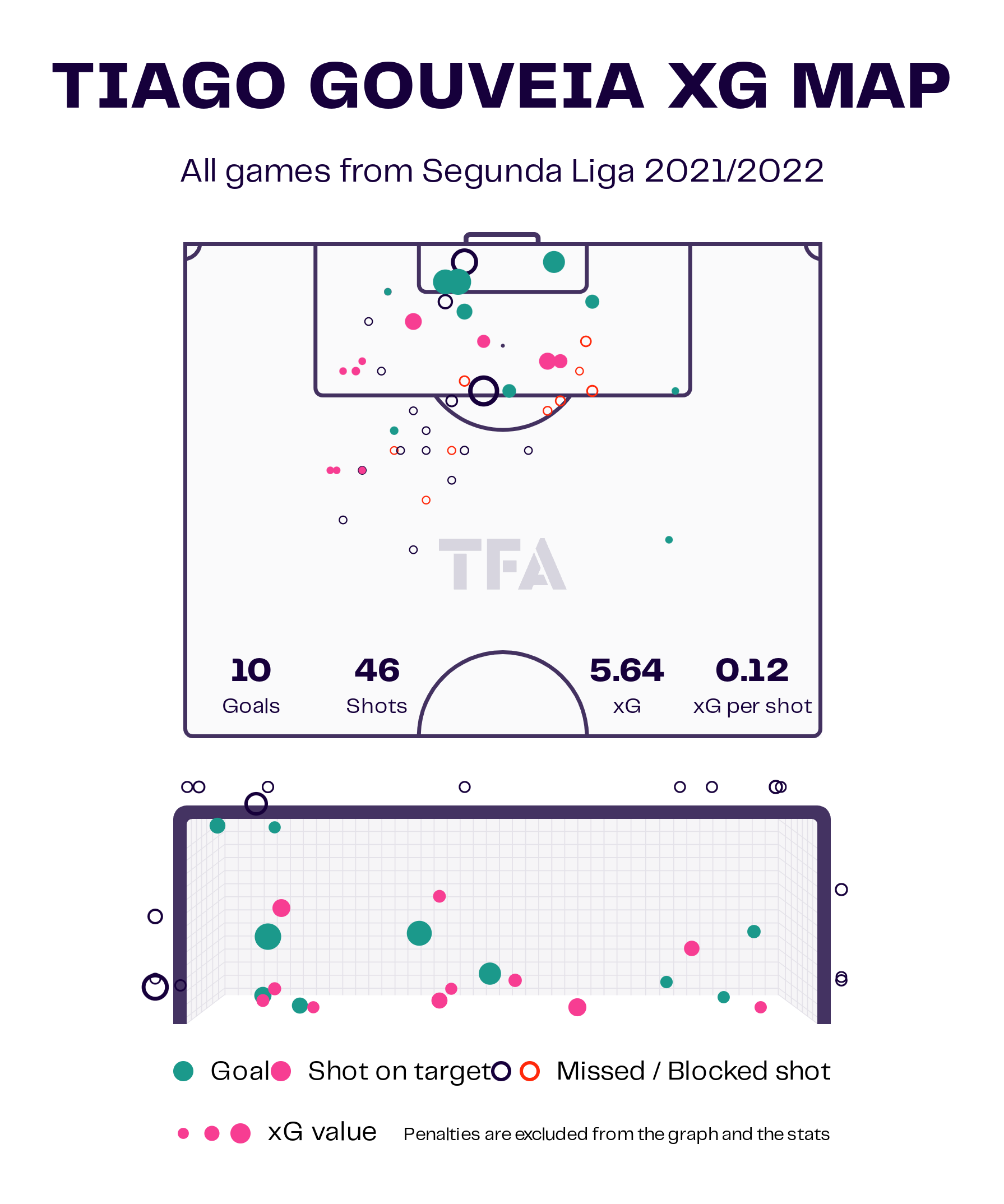 In comparison to the 2021/22 season, Tiago Gouveia scored a total of ten goals with Benfica B in Liga Portugal 2. He attempted 46 shots, averaging 2.34 shots per game with an accuracy rate of 45.7%. He was scoring 0.51 goals per game with an average xG rate of 0.29. The standard of competition is much higher in Liga Portugal, and yet he has managed to keep his goal contributions intact. 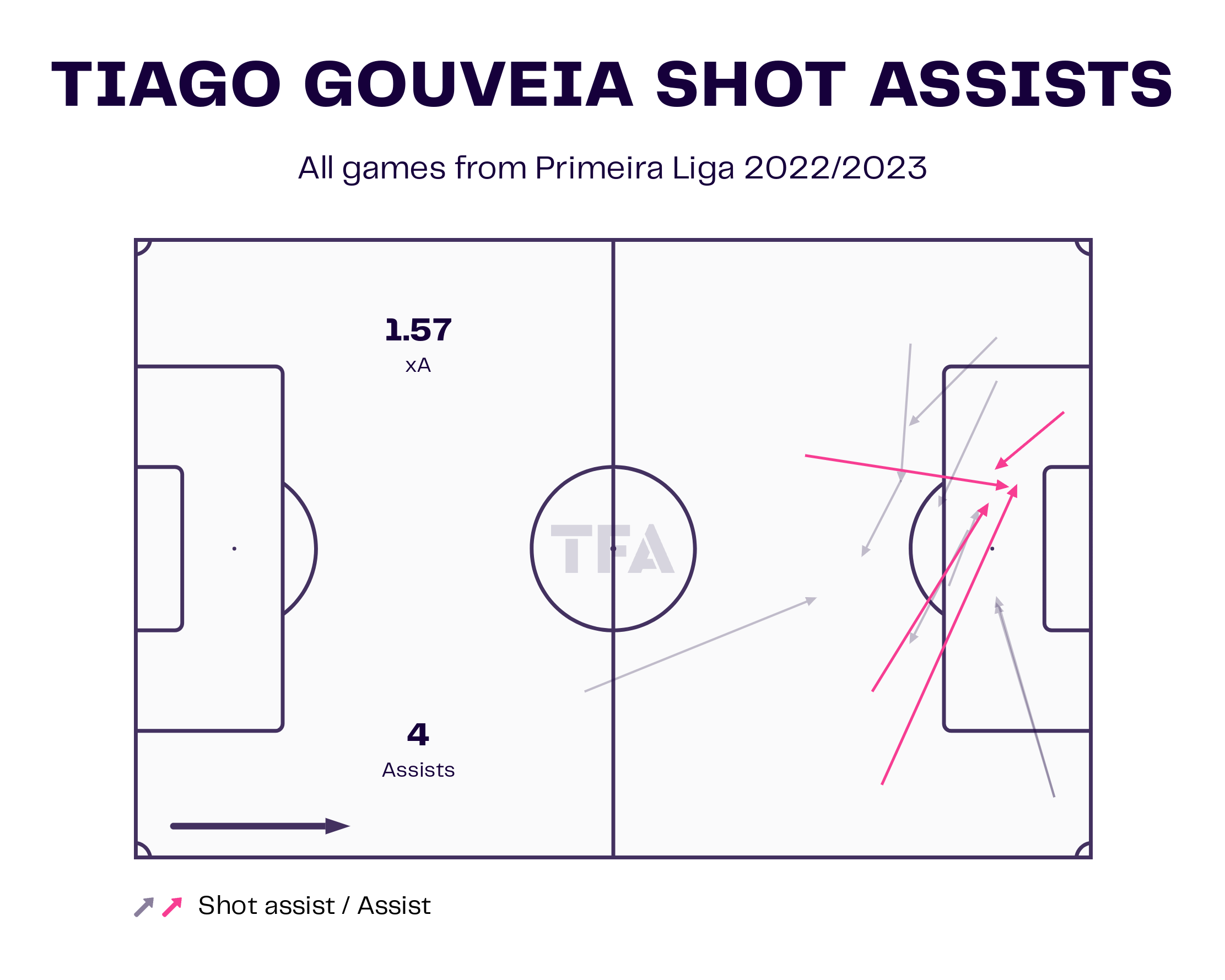 Another important aspect of Tiago’s game is his ability to find and set up his teammates. He has four assists to his name in ten matches and has already equalled his assist tally from the previous term, and that too against tougher opposition in the top tier. He is averaging 0.42 assists per match with an xA rate of 0.17. Gouveia has the vision to find both through and key passes. The forward averages 1.79 passes to the final third along with 2.01 pass into the penalty area per match. Thus far this season, he has created five big chances along with 1.6 key passes and 1.26 through passes per 90 minutes. He also makes 1.26 shot assists per match on average.

Tiago Gouveia with the ball 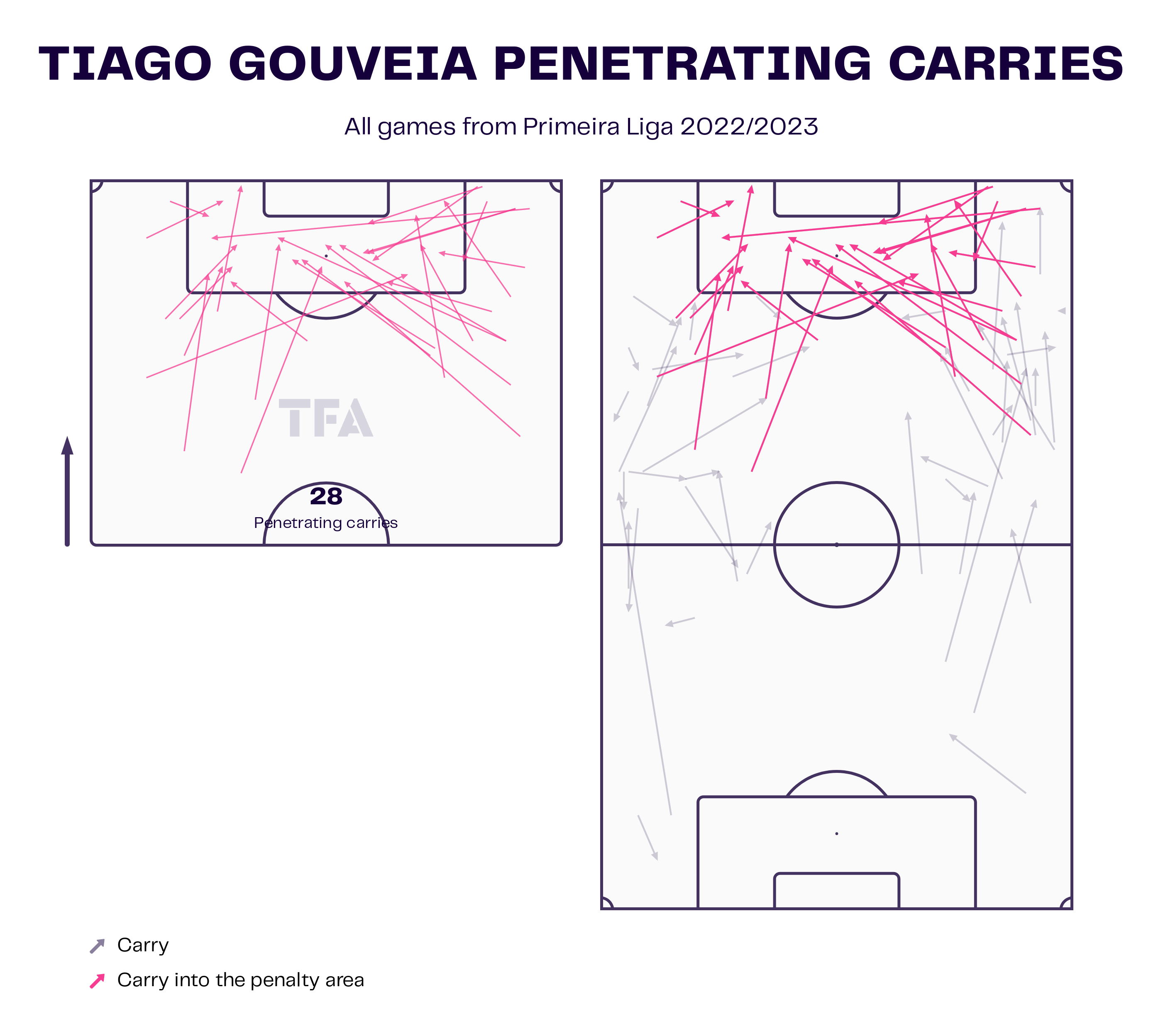 Dribbling is one of the main characteristics of the young Portuguese. He penetrates the opponent’s defensive lines using his pace, beats players, and challenges with his skills. The above viz shows the penetrating carries made by Tiago Gouveia this season. The 21-year-old is well capable of making penetrating carries into the penalty box; 28 such instances have been seen this season. Sometimes he likes to cut inside on his dominant right foot; other times he goes for an attempt on goal. 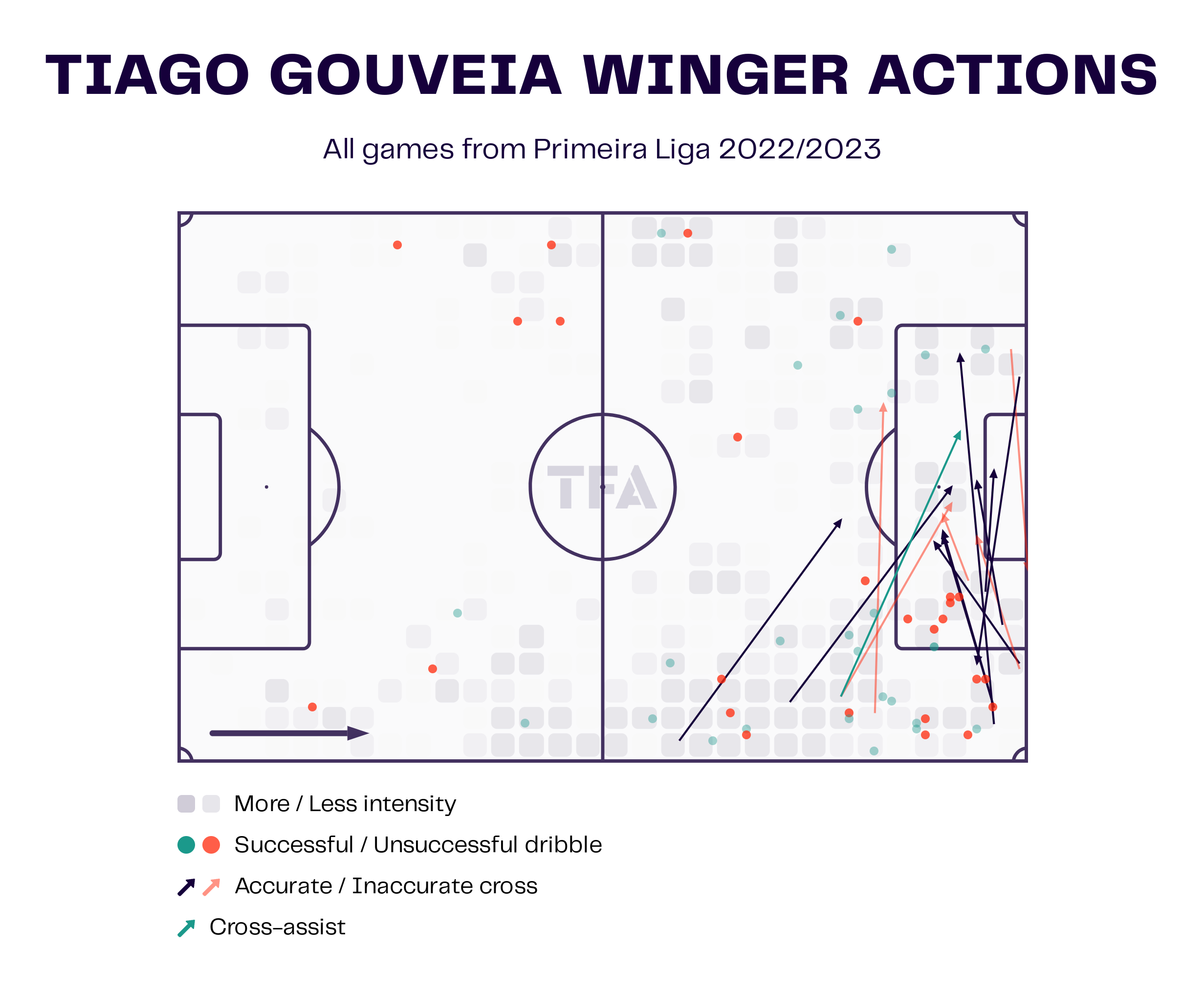 Playing as a wide forward, Tiago Gouveia likes to drift wide to stretch the play and create chances. The viz above highlights his creative capabilities with the ball through winger actions. Sometimes he likes to take on players in wide positions; other times he puts crosses into dangerous areas. The 21-year-old attempts an impressive amount of 5.57 dribbles per match with 51% accuracy and 1.89 crosses with 55.6% accuracy. Furthermore, Tiago averages 3.26 touches in the penalty area and makes 2.94 progressive runs per match.

After a good season in the second division last year, Tiago Gouveia has turned some heads in his direction with impressive displays in Liga Portugal this season. He possesses a variety of attacking skill sets and is a threat to opposing defences with his ability to score goals and provide assists. Estoril will be hoping for more of the same from the talented youngster throughout the duration of his loan spell.