Stephen Eustaquio is one of the emerging midfielders in Liga Portugal. He played for top-division teams like Chaves and Pacos Ferreira before moving to Porto at the start of 2022 for a brief loan spell. He enjoyed the highs of a successful season with Porto, as the club won the Liga Portugal and the Portuguese Cup last year. Going into the summer, Porto decided to make Eustaquio’s loan deal permanent, and the 26-year-old has transformed into a key midfield figure for Sergio Conceicao’s side since. Eustaquio played in the 2022 FIFA World Cup with Canada and is having an impressive season at the club level currently. Below are some stats that delve into Stephen Eustaquio’s performances with FC Porto in Liga Portugal 2022/23. 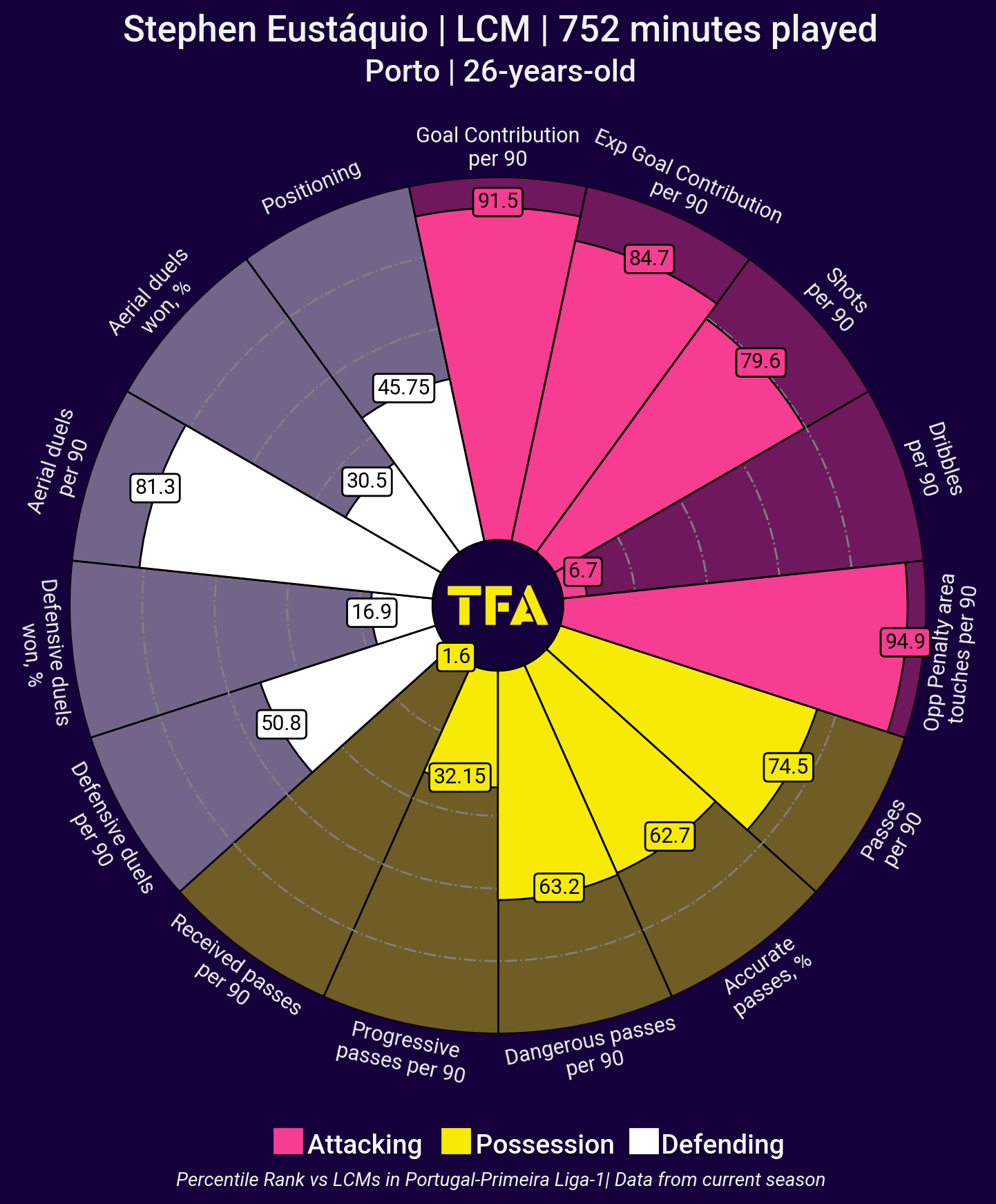 Stephen Eustaquio has made 12 league appearances this season, of which he has started eight. Averaging around 55 minutes per game, the new signing has taken up an important role in the midfield for Sergio Conceicao’s team. The above viz shows the percentile rank of Eustaquio’s stats compared to other central midfielders in Liga Portugal. We can observe that the midfielder possesses a very high rank for attacking indicators like goal contribution, penalty area touches, and shots per 90. His possession stats are also impressive, with a good rank under the various types of passes. In the defence department, he has a high percentile rank for aerial duels won and is also decent in terms of contesting defensive duels. 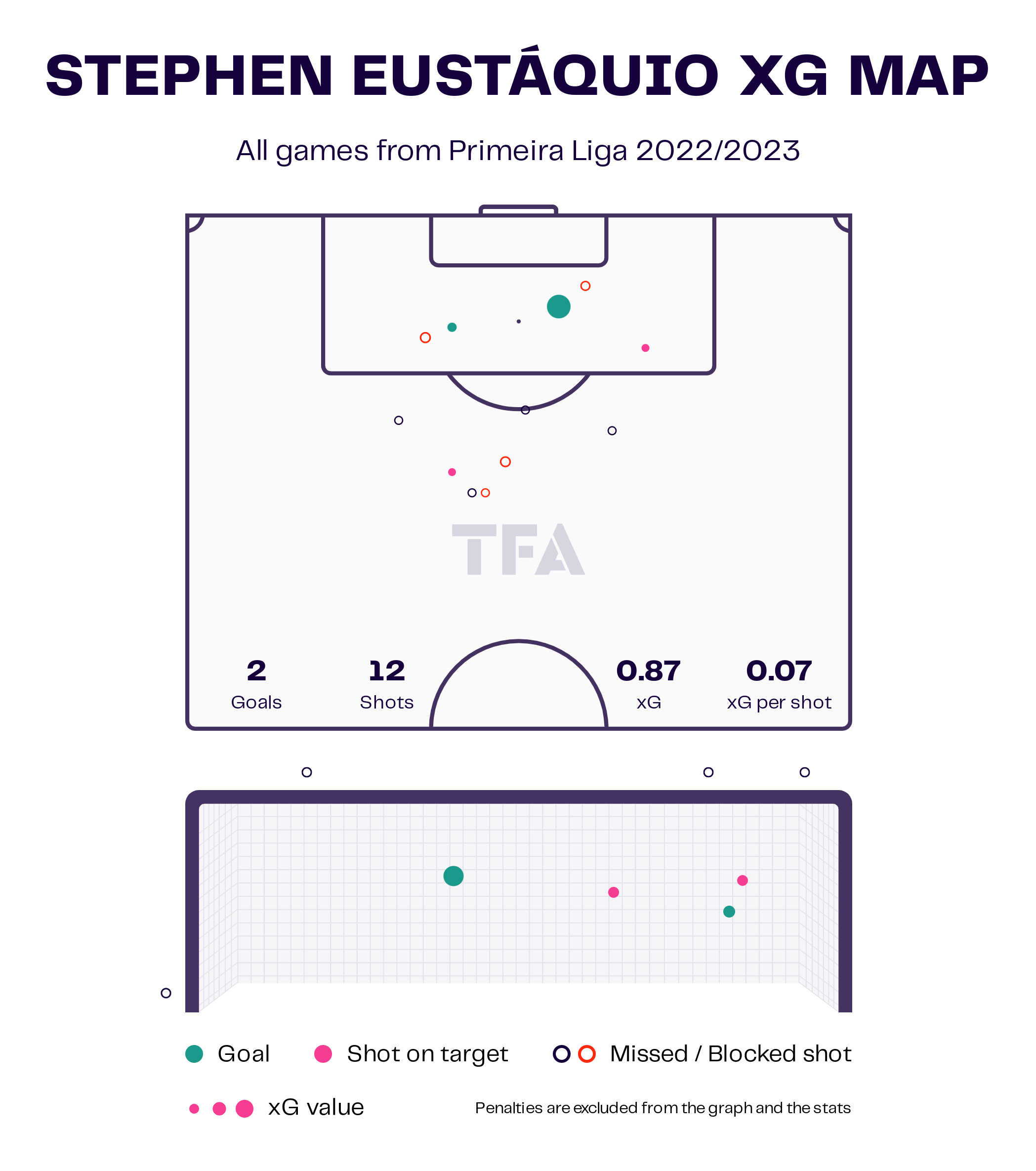 Primarily a centre midfielder, Stephen Eustaquio is not usually the one to score goals. But with two goals to his name already, he is on course to have one of the best seasons in his career in terms of goal returns. The above viz depicts Eustaquio’s shot map in Liga Portugal 2022/23. It can be observed that he scored both of his goals from pretty close range inside the penalty box. The Canadian midfielder has taken 12 shots thus far, averaging 1.4 shots per match with 33.3% accuracy. He is scoring at a rate of 0.23 goals per game, which is higher than his average xG rate of 0.10. 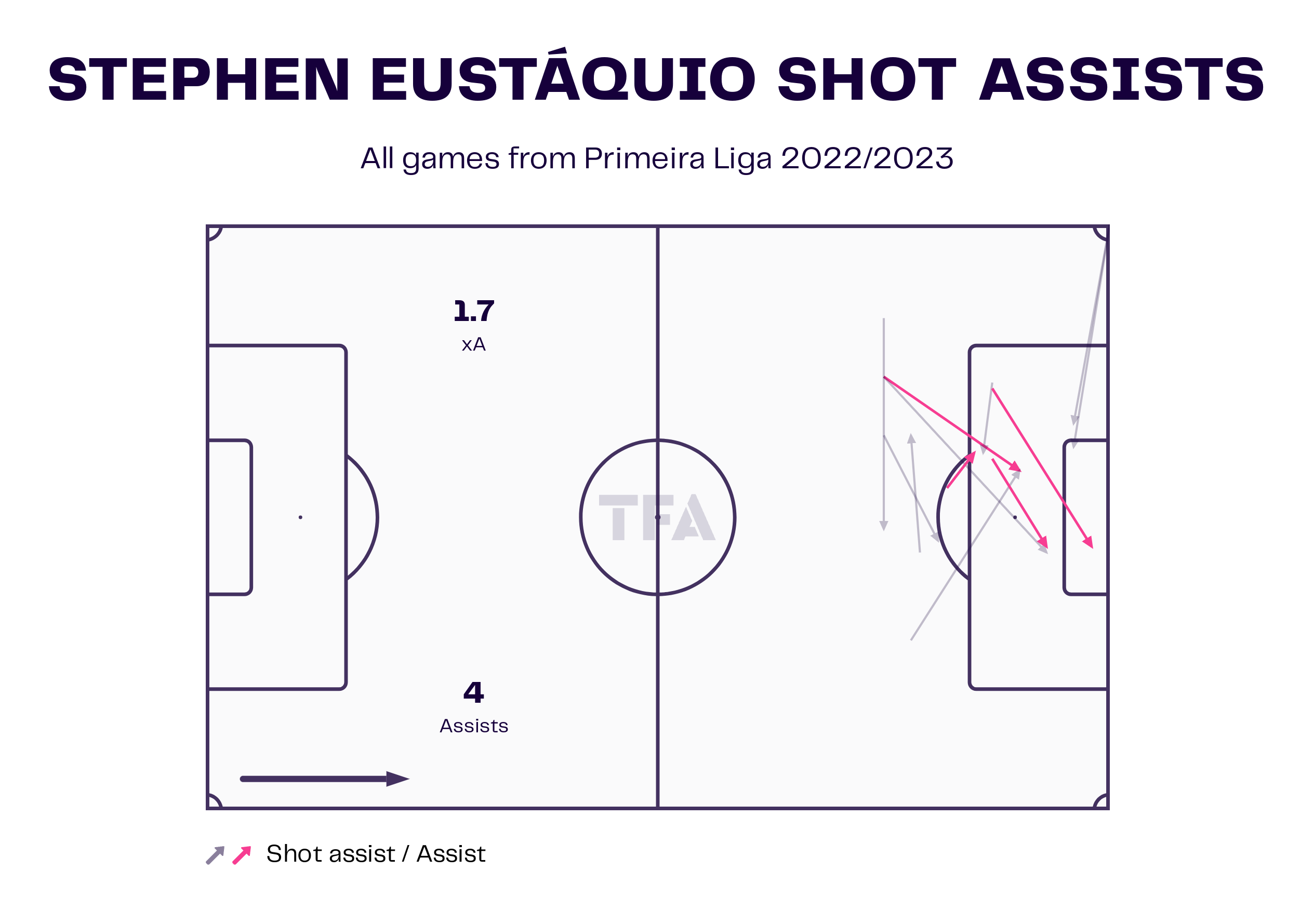 Another important aspect of Stephen Eustaquio’s game is his ability to set up his teammates for goals. Thus far, he has four assists under his belt, which is the most he has ever achieved in a single season. The Canadian international’s average xA rate of 0.2 is currently one of the highest values among similar players in the league. He has created six big chances this season and averages 1.2 key passes and 1.16 through passes per 90 minutes. Additionally, Eustaquio puts in 1.28 crosses and makes 1.28 shot assists per match on average. 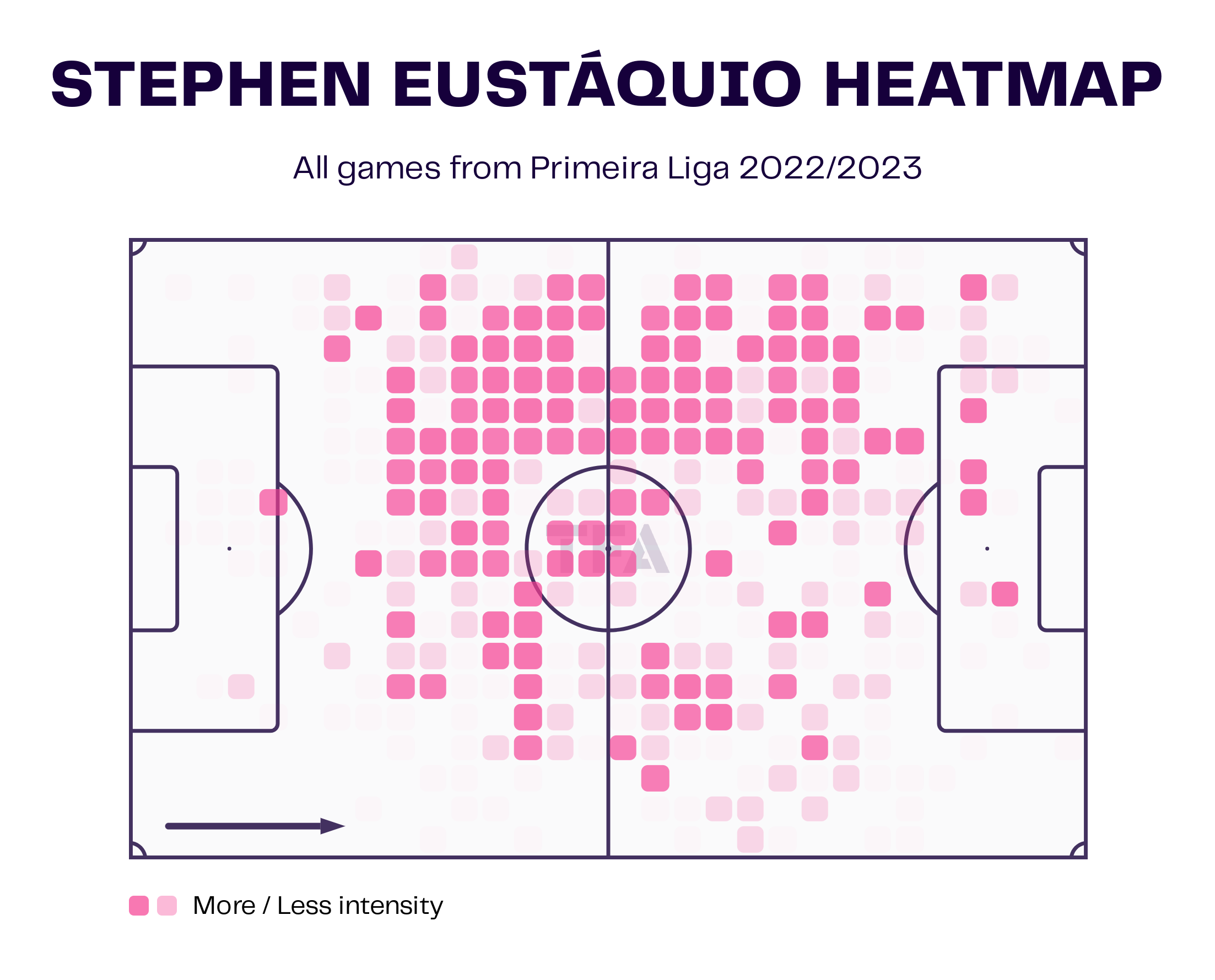 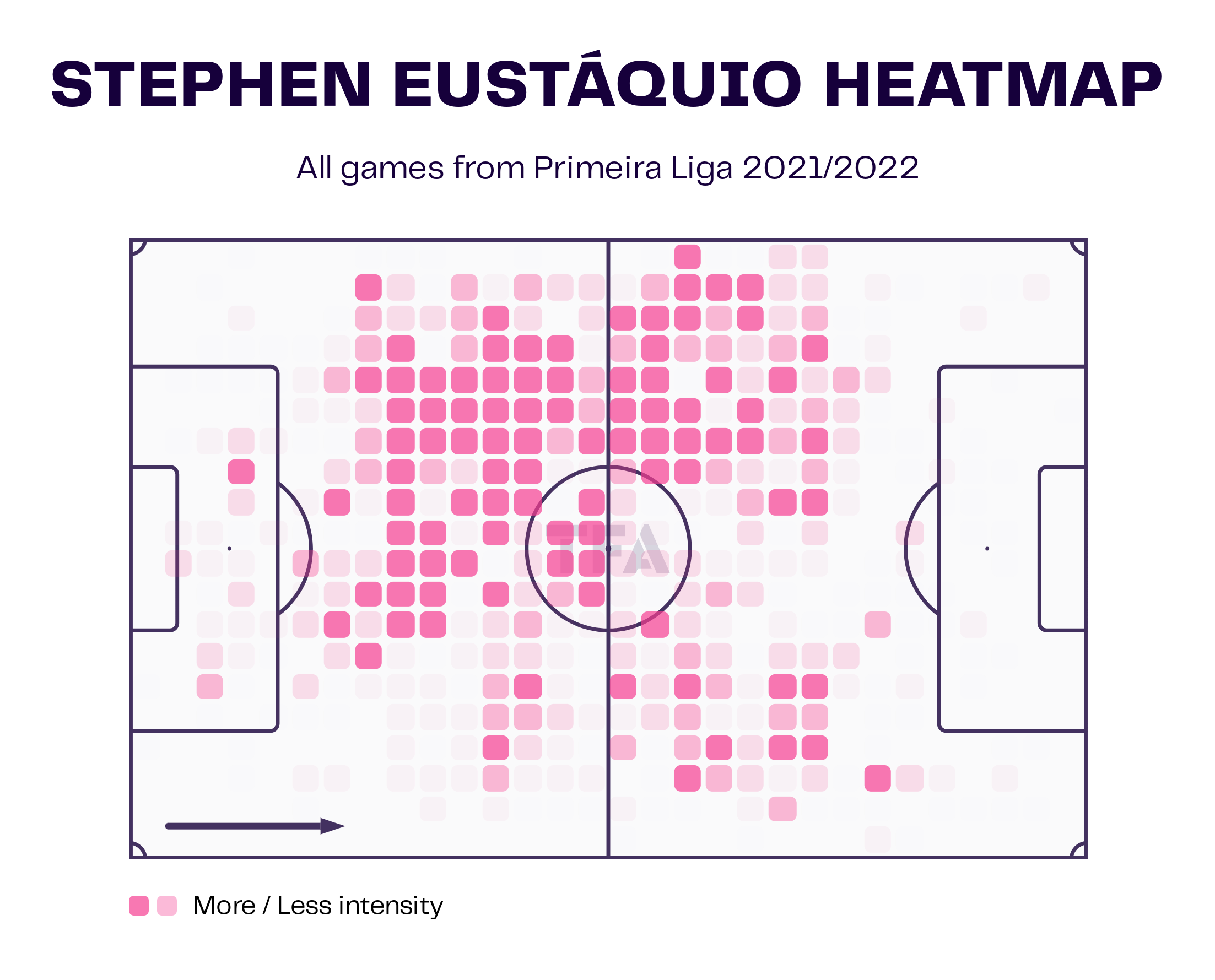 Eustaquio has usually played as one of the two central midfielders in Sergio Conceicao’s 4-4-2 system at Porto. The two visuals above are a comparison of the player’s heat maps from this season and the previous one. It can be observed that the midfielder has taken up a more progressive role at Porto this season. Comparatively, Eustaquio is showing more involvement in the advanced attacking positions in the final third. He is averaging 19 touches per match in the attacking third along with 2.2 touches in the opposition’s penalty area. 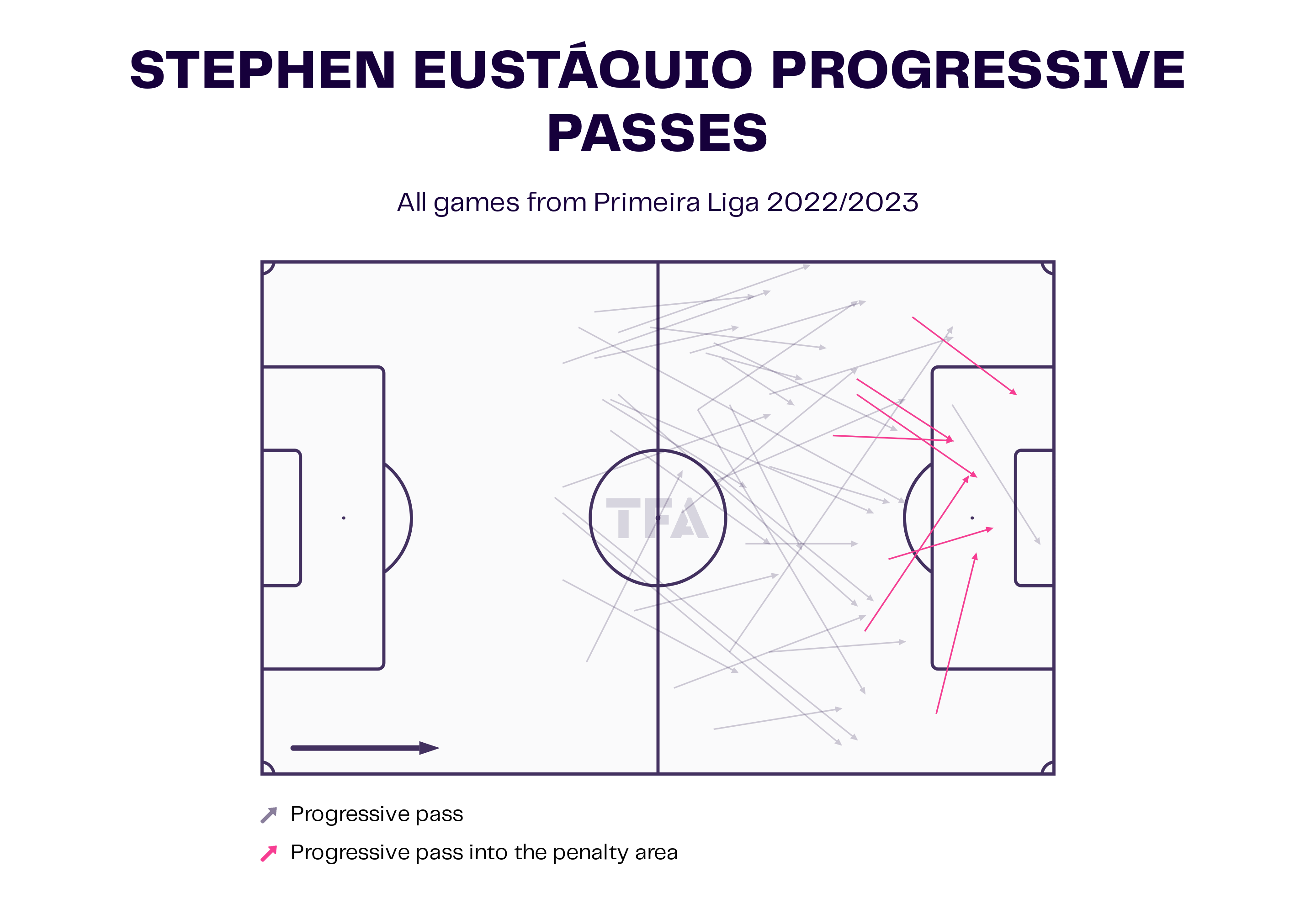 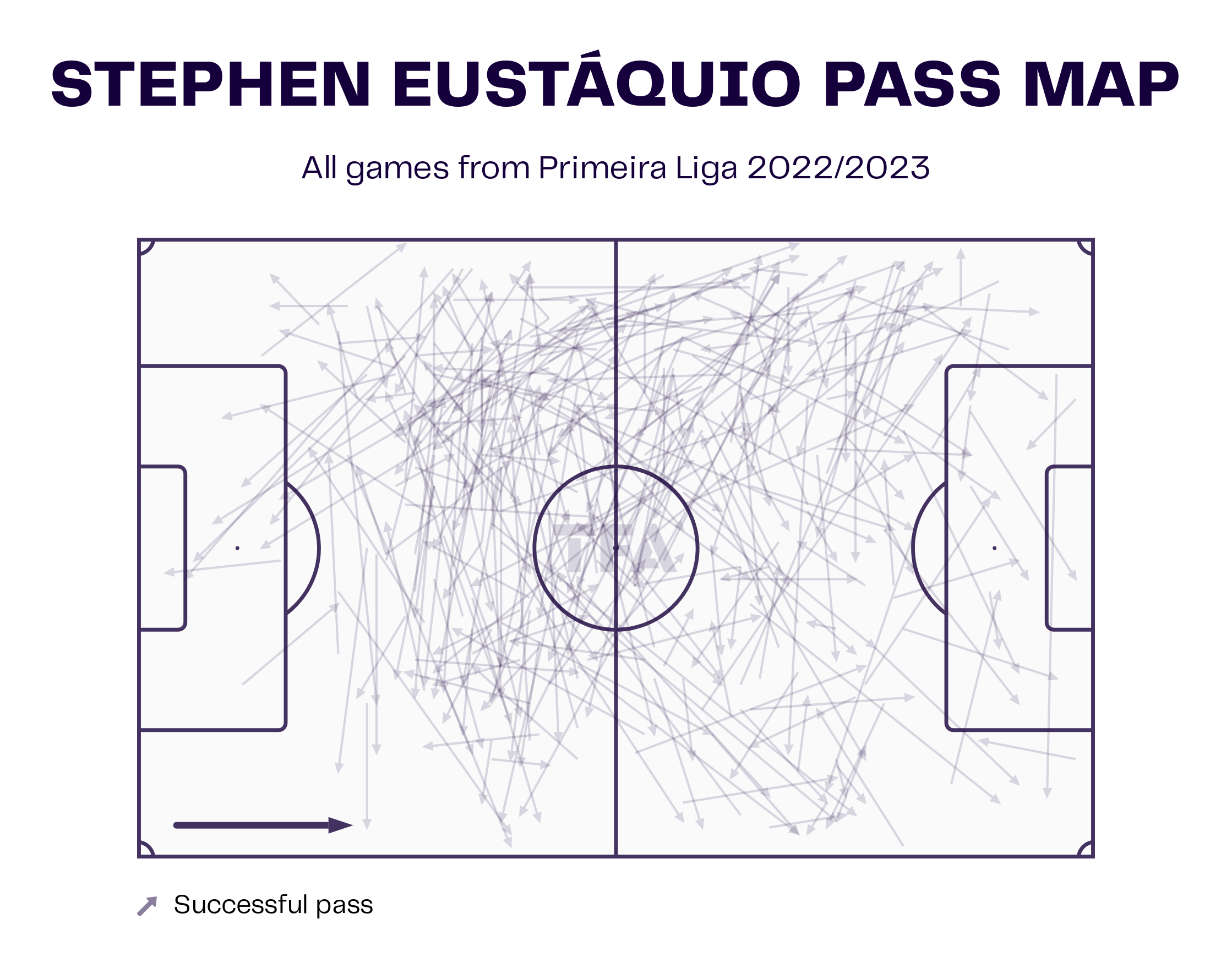 Stephen Eustaquio mainly performs the duty of circulating possession of the ball from midfield. The two visuals above show the type of passing actions performed by the midfielder this season. A network of passes across the middle third indicates Eustaquio’s crucial role in keeping control of possession for Porto. Alternatively, he uses his progressive passing ability to find teammates in the penalty box. Eustaquio averages 45.23 passes per match with an impressive accuracy of 86.7%. Furthermore, he makes 6.49 passes to the final third and 2.32 passes into the opposition’s penalty area per game. 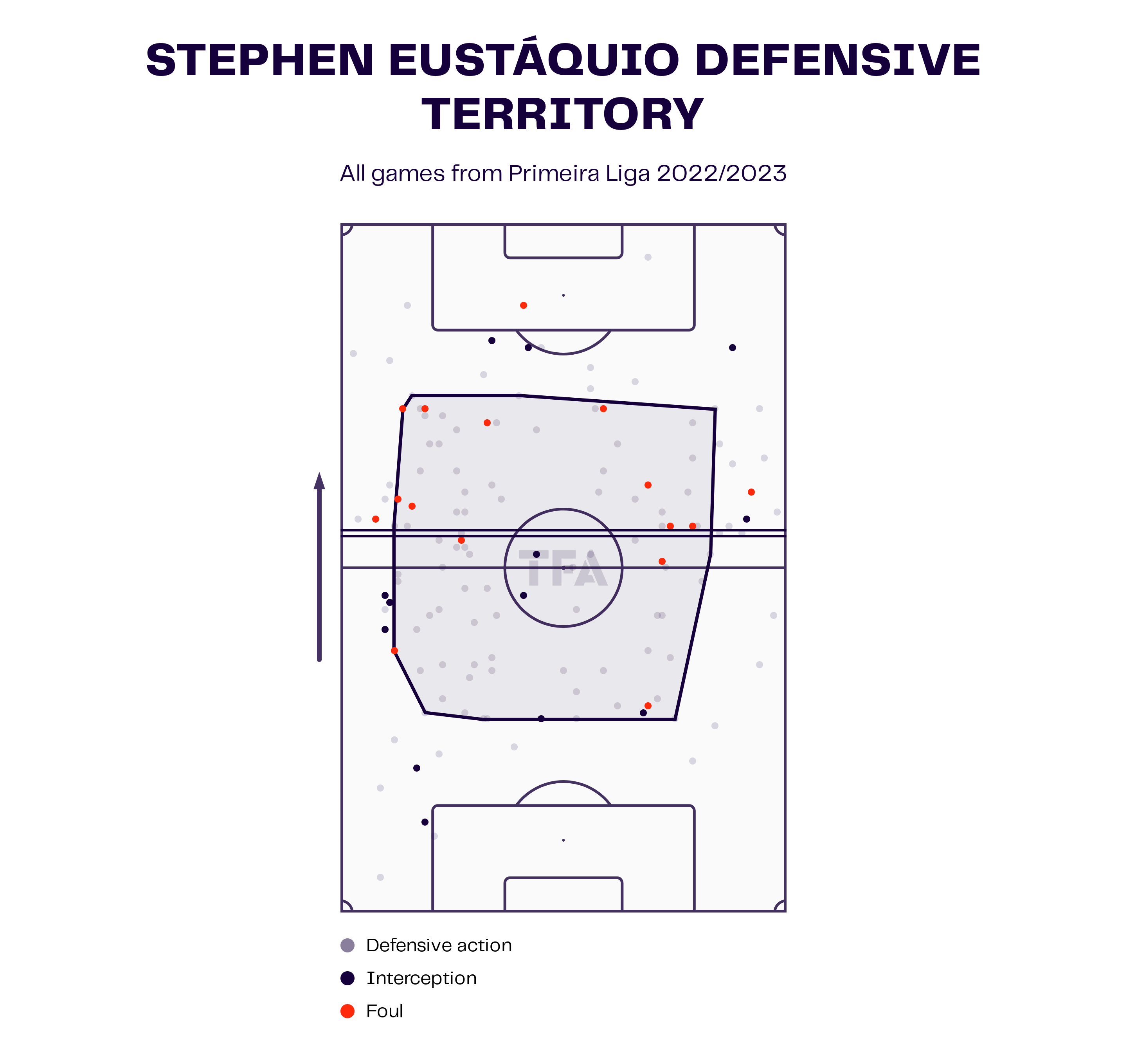 As a central midfielder, Eustaquio commits defensive actions in a lot of areas across the field. The viz above shows his average defensive territory from this season. Eustaquio positions himself near the half-line in the opponent’s half and engages in numerous defensive actions in both halves. The midfielder makes 7.31 recoveries along with 3.25 interceptions per match. Furthermore, he contests 7.07 defensive duels per match with a 47.5% success rate and 3.13 aerial duels with a 37% success rate.

Stephen Eustaquio has demonstrated himself as a vital figure in Porto’s midfield. He has shown attacking and creative potential this season while performing his usual duties in central midfield with sincerity. The 26-year-old has quickly become an important player for his new club. And with Porto third in the league table and chasing their rivals for glory, they will look for the same impressive performances from the Canadian for the rest of the season.