Sporting CP currently sits in fourth place in Liga Portugal 2022/23, having taken 29 points from 16 matches. They find themselves in an unfavourable position this season after delivering excellent performances in the past two campaigns that saw them win the title in 2020–21 and finish second in the 2021/22 seasons, respectively. The club from Lisbon has struggled to replicate the same levels of consistency this season; one reason for it is their below-par away record.

The gap between a top-three finish and Champions League qualification for Sporting currently stands at seven points. They have scored 31 goals, which can be considered on par with the top three teams, but they have conceded 18 goals, which is significantly higher compared to the competition. While Sporting’s home record is nearly perfect with six wins and a loss, they have a troubling away record with three wins, two draws, and four losses. Below are some stats depicting the mismatch between Sporting’s home and away performances in the Liga Portugal season of 2022/23.

Overview of the season for Sporting 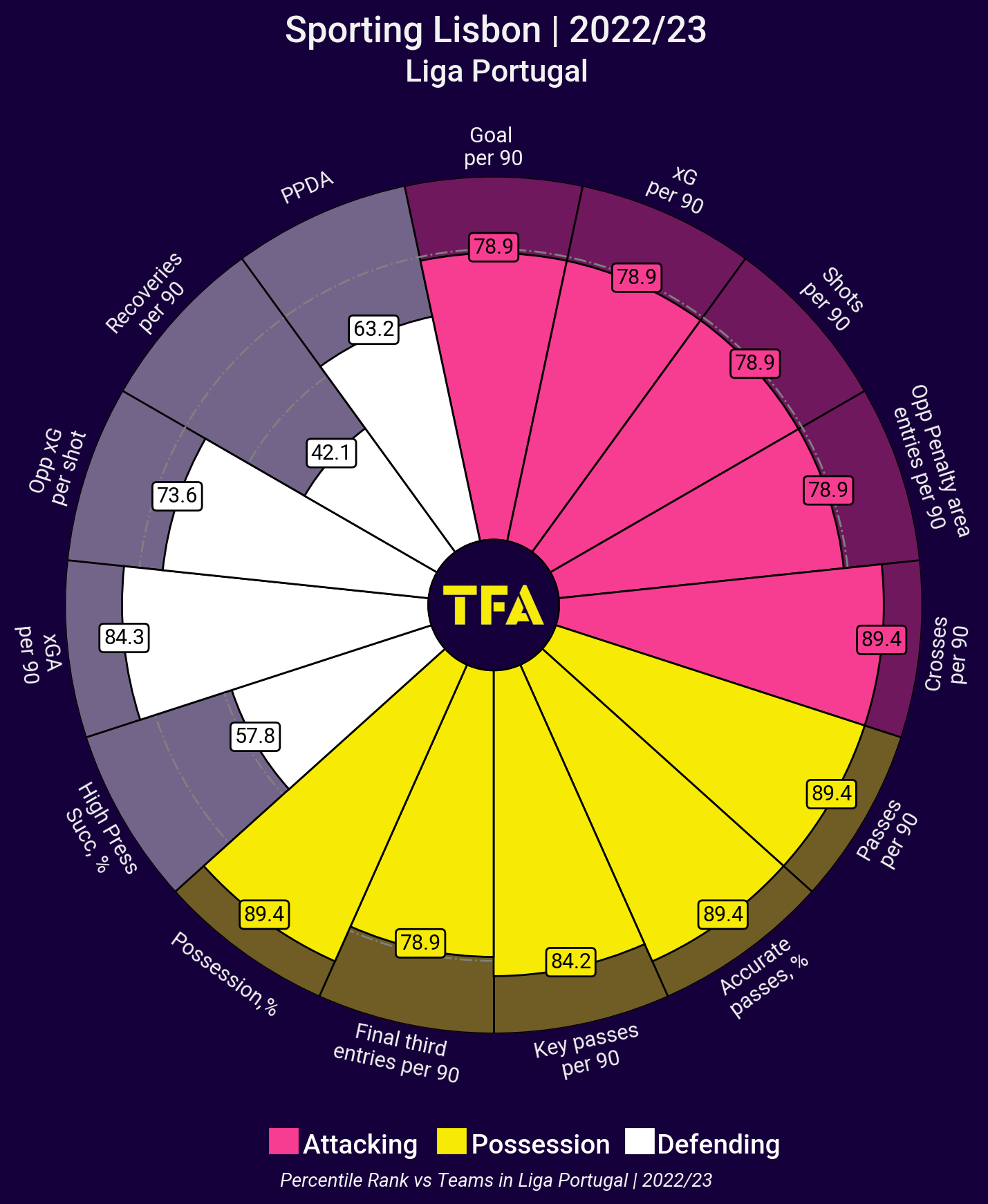 The above viz shows the percentile rank of Sporting CP’s stats compared to other teams in Liga Portugal. Ruben Amorim’s team shows a high percentile rank in the indicators under the attacking and possession departments. However, their defending stats have a different story to tell. Their shortcomings in areas like recoveries and high pressing efficiency are apparent because of their comparatively lower rank.

Sporting’s attack away from home 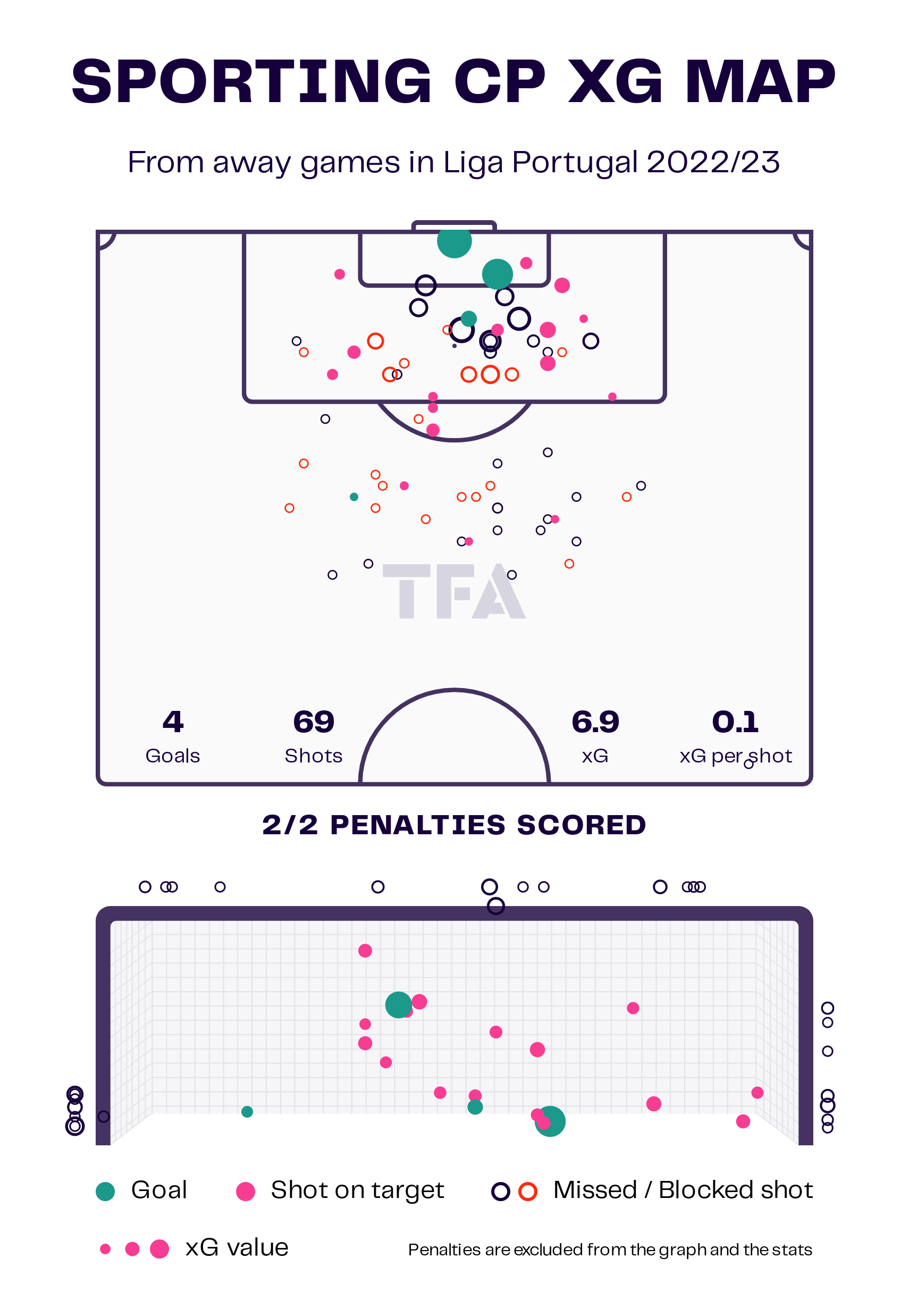 Sporting’s attack has been competent this season, scoring 31 goals so far. However, they have scored a relatively low amount of 12 goals while on the road. They score at the rate of 1.33 goals per match in their away fixtures while averaging the exact same xG rate in these matches. The viz above shows the team’s shot map from away matches this season. Excluding penalties, they have taken 69 shots and scored four goals, which is a low return compared to the number of attempts made. Sporting averaged 11.56 shots with 31.7% accuracy in the away games. 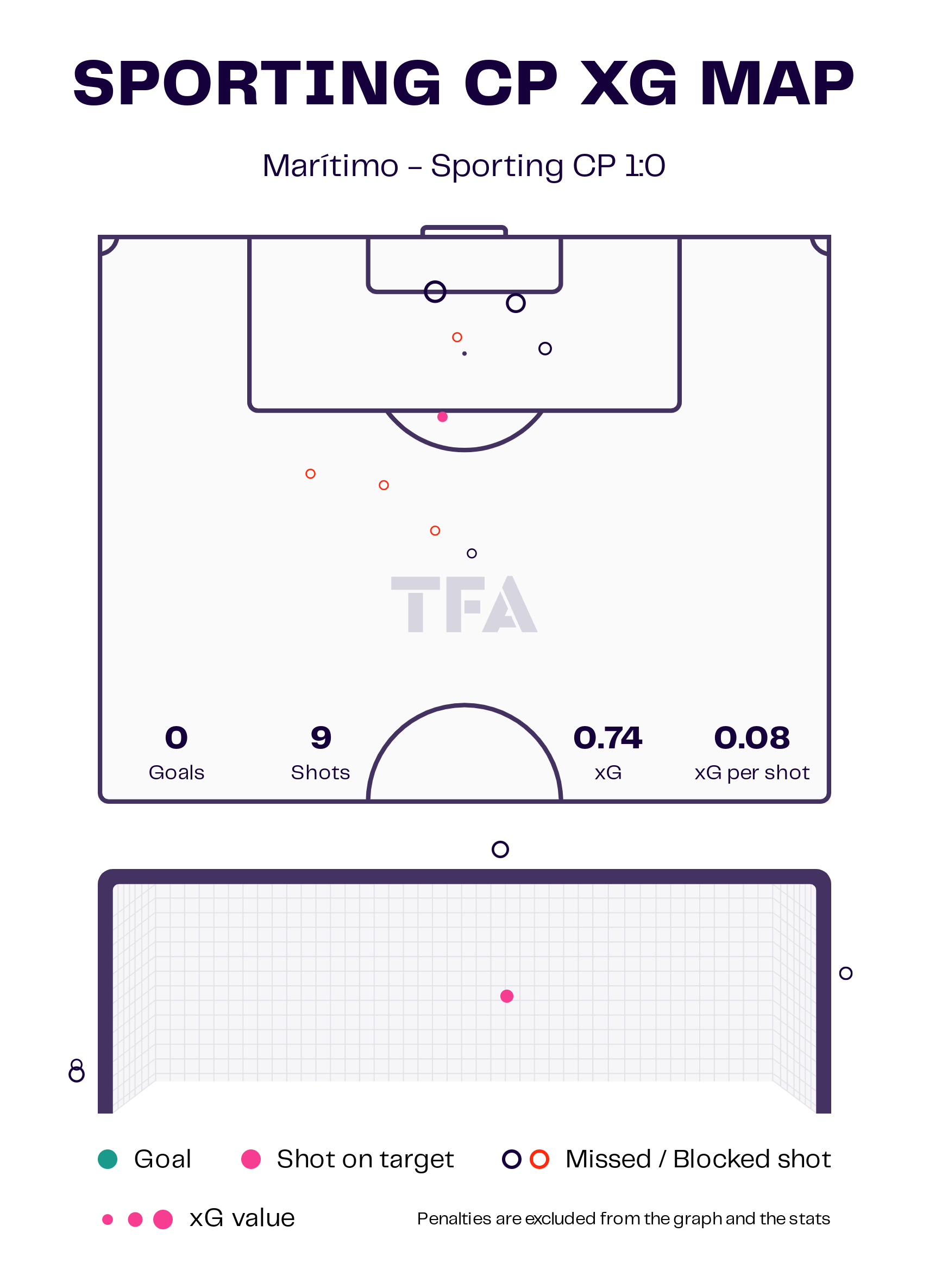 The above viz depicts Sporting’s shot map from their visit to Maritimo in Liga Portugal, which ended in a shock 1-0 defeat for Ruben Amorim’s men. Despite facing opposition from the relegation zone, Sporting struggled to create chances. They could only manage a low number of nine shots in total with only one on target for an xG rate of 0.74. Additionally, they created 29 positional attacks and took four shots from such plays. Maritimo, on the other hand, had two out of nine shots on target and took five shots from the 20 positional attacks they created for an xG value of 1.14. 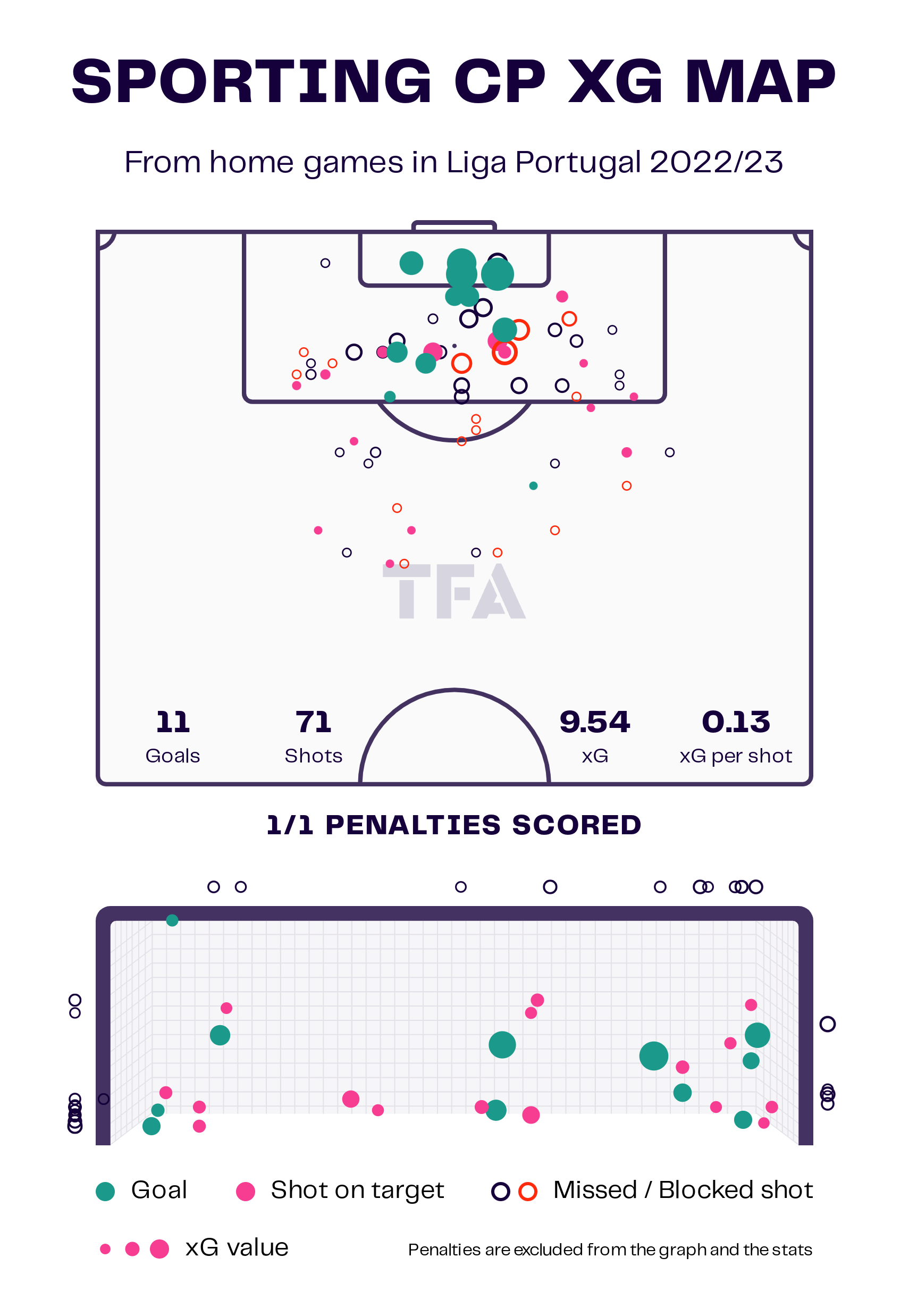 When playing at home, they have scored 19 goals, averaging 2.71 goals per match with an xG rate of 2.3 per 90 minutes. They average 18.43 shots with an accuracy rate of 40.3% in home matches. From the above viz, it can be observed that Sporting take more shots from inside the penalty box while playing at home compared to away matches.

Defensive stats away from home 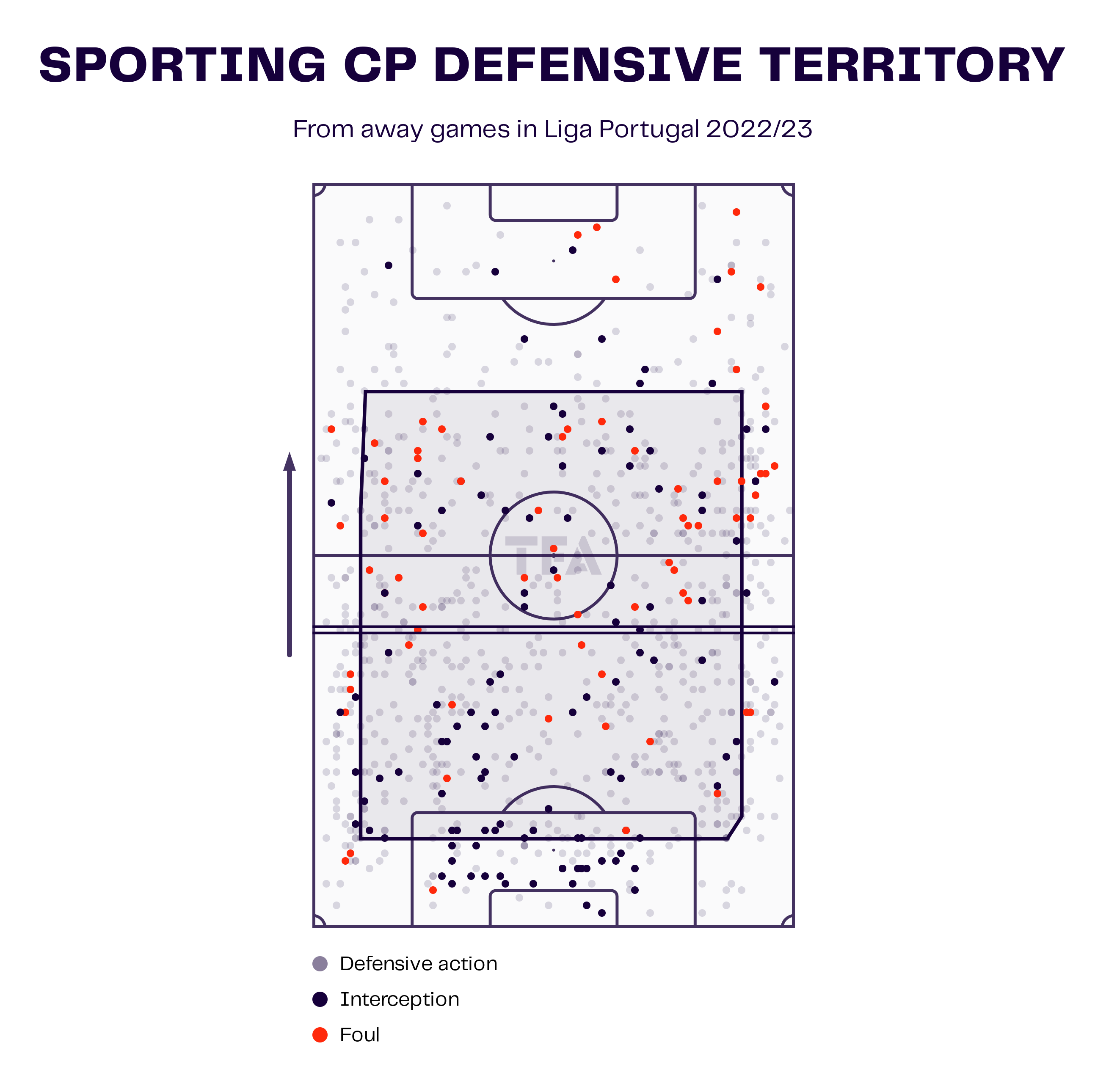 Sporting’s defence has shown signs of weakness this season, especially in away matches. Of the 18 goals they have let in, 14 have been during their visits. They concede 1.56 goals per away match, a higher rate than their xGA of 1.39. The above viz shows the team’s defensive territory for their away games this season in Liga Portugal. It indicates that Sporting play with a deeper backline and are involved in a lot of defensive actions in the defensive third, including the penalty box. They make 36.11 interceptions, compared to 42.67 by their opponents. Sporting wins 59.9% of the defensive duels and 50.6% of the aerial duels contested away from home per 90. 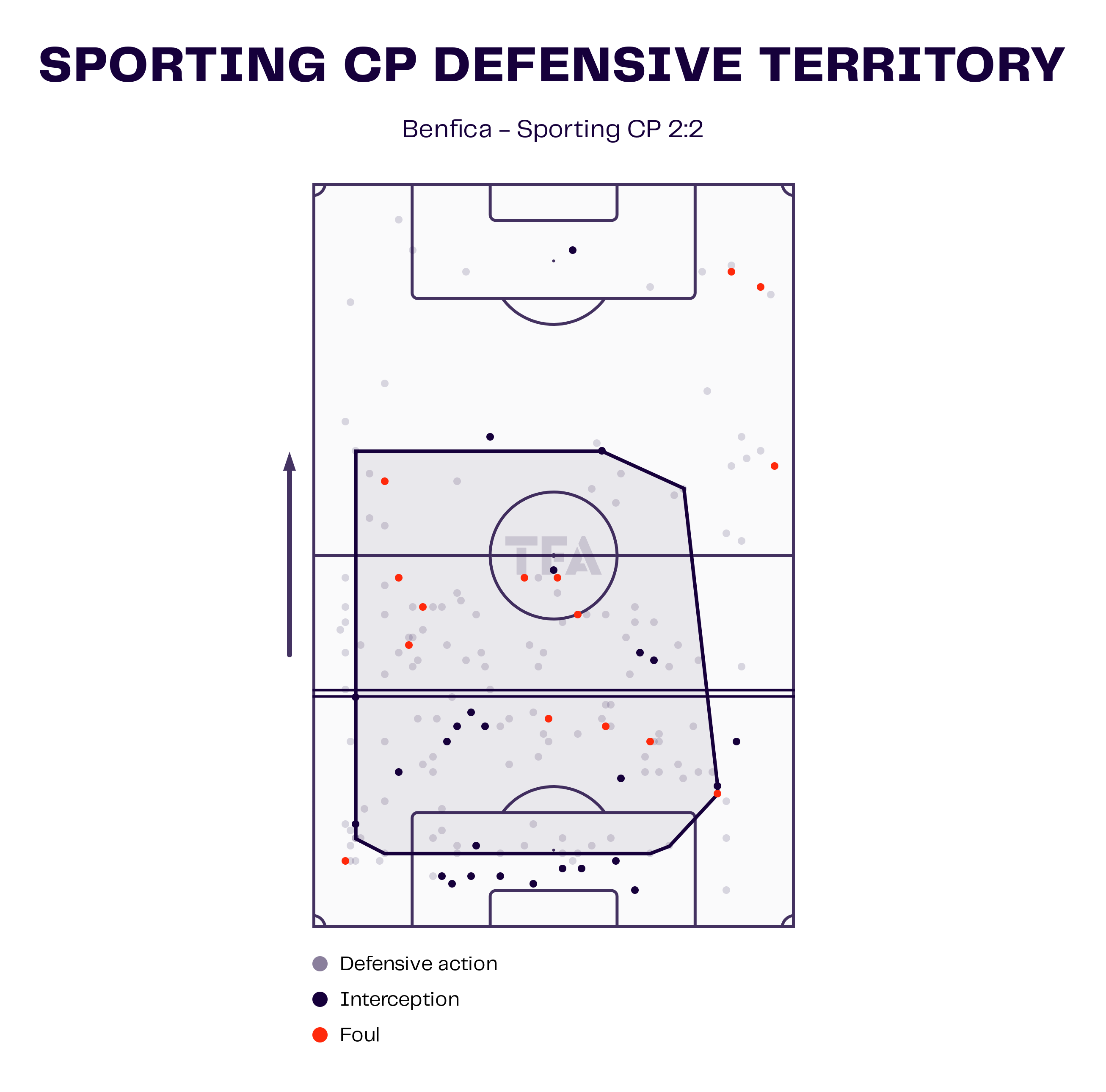 The above viz shows Sporting’s defensive territory from their most recent away clash against Benfica, which ended in a 2-2 scoreline. Even though Sporting were up against extremely tough opposition this time, conceding easy goals in away fixtures has been a common theme for them this season. The visitors were the busier side in defence, making 45 interceptions and 18 clearances compared to the 27 and 10 such actions made by their rivals. 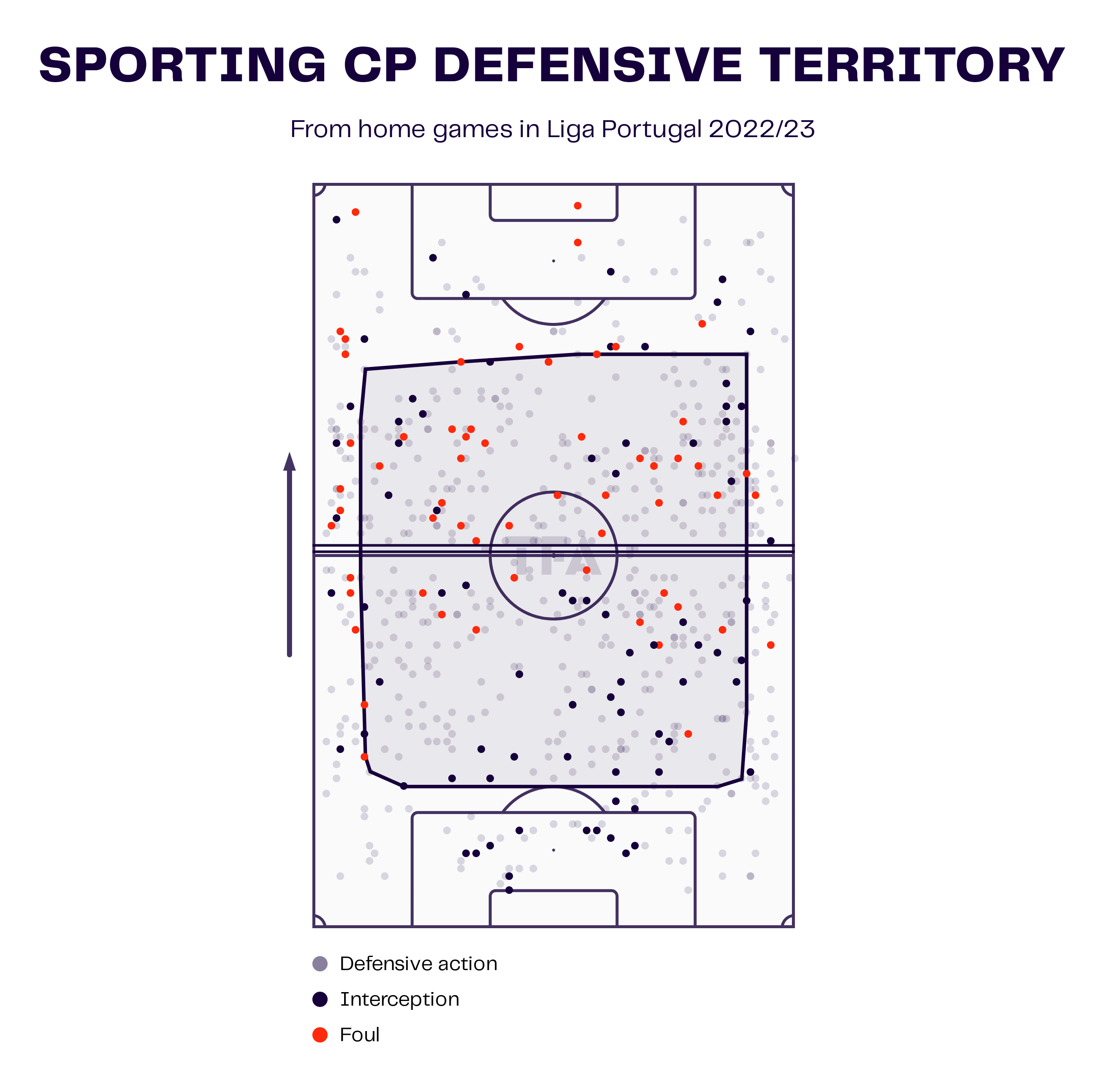 In terms of Sporting’s defensive performances at home, the team tends to play with a much higher backline and more on the front foot. The team has shown impressive defensive discipline in home matches, conceding only four goals thus far. They concede 0.57 goals per match with an xGA rate of 0.63. In these home games, Sporting makes 30.3 interceptions per 90 minutes, with a win rate of 59.3% and 42.2% for defensive and aerial duels contested.

Sporting’s inability to score more goals away from home than they concede has seen them drop important points against inferior opposition like Maritimo, Famalicao, Boavista, and Arouca. The major lapses have been in the team’s defensive gameplay during the visits, which have stunted their Liga Portugal campaign. Sporting will draw inspiration from their spirited performance away at Benfica, despite a 2-2 draw, to fix their away record in the coming fixtures.