As match day 17 of Liga Portugal beckons, Santa Clara will play host to Benfica at the Estadio de Sao Miguel. The hosts are amidst a poor run of form as they sit 16th in the Liga Portugal rankings, having won only one of their last five. On the other hand, Benfica will go into this fixture with a four-point lead at the top of the rankings but have dropped points in recent weeks. They played out a 2-2 draw against Sporting last week and will be keen to avoid further slip-ups as their rivals keep gaining ground every time they do so. Meanwhile, Santa Clara will look to perform well in this tough test and avoid defeat to prevent dropping further into the relegation zone. Below are some stats looking at the likelihood of the outcome of this Liga Portugal match.

Santa Clara is experiencing a harsh Liga Portugal campaign. They have won only three matches out of 14 while drawing five and losing eight. The Azoreans have netted only 11 goals thus far and average 0.79 xG per match. Their defence has let in 18 goals with an xGA rate of 1.62. Santa Clara are winless in their last three games after playing out a goalless draw against Portimonense last week. 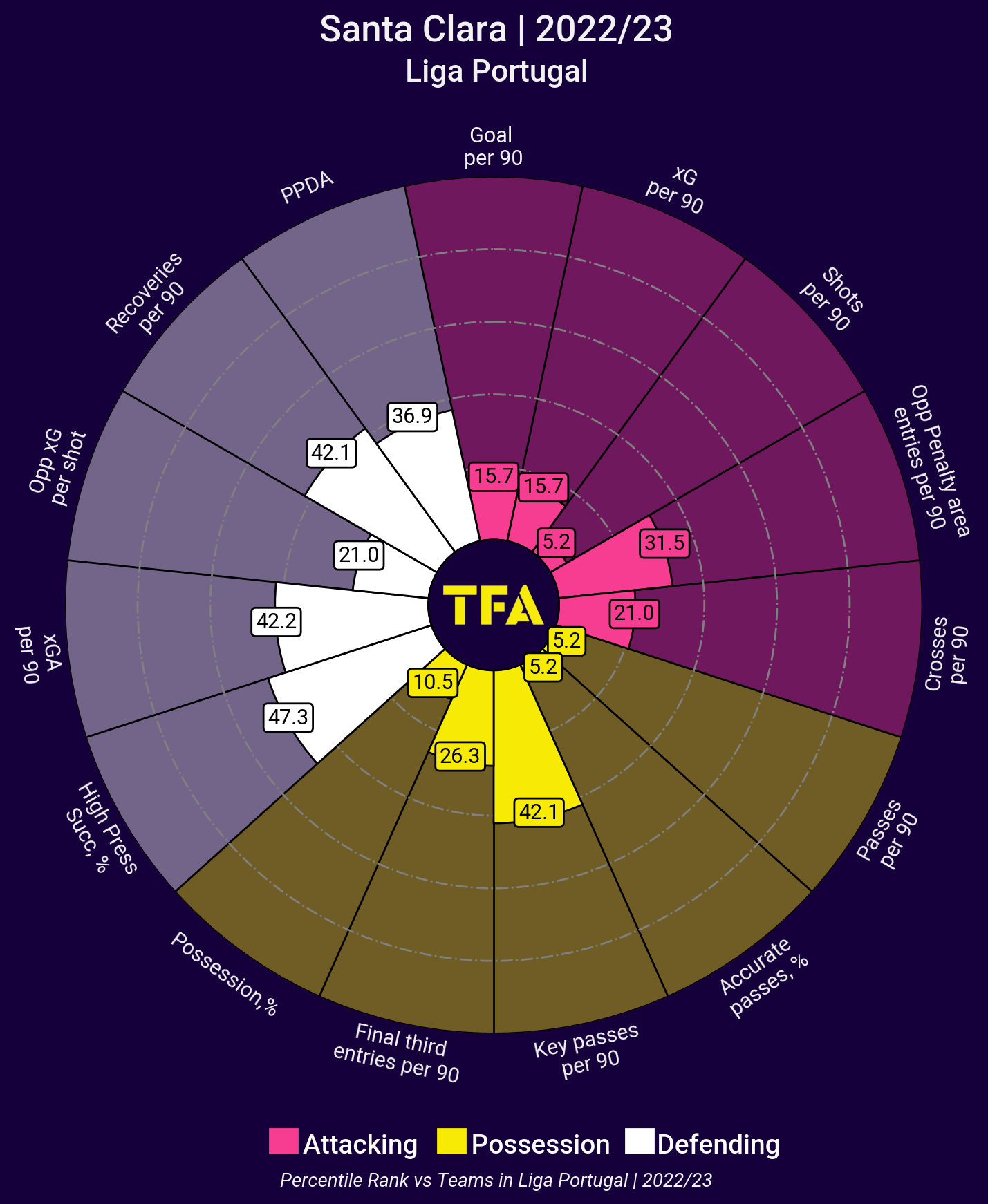 The Azoreans have struggled to achieve results this season. From the above viz, we can observe that Mario Silva’s team has struggled in the attacking and possession departments. They have registered low numbers in terms of goals, shots, accurate passes, and possession rate. On the other hand, their defence has reasonably better stats in areas like recoveries and pressing success rates. Santa Clara will plan to be proactive and compact at the back to have any hopes of mounting an upset against Benfica.

Meanwhile, Benfica are having a tremendous season in Liga Portugal. They have won 13 matches, drawn two, and lost one match thus far. Roger Schmidt’s side has scored 40 goals while averaging 2.49 xG per match. Their defence has let in 12 goals with an xGA rate of 0.56. Benfica’s superb unbeaten form (12W, 1D) has slightly faded in recent weeks, with three wins in their last five matches (1D, 1L). 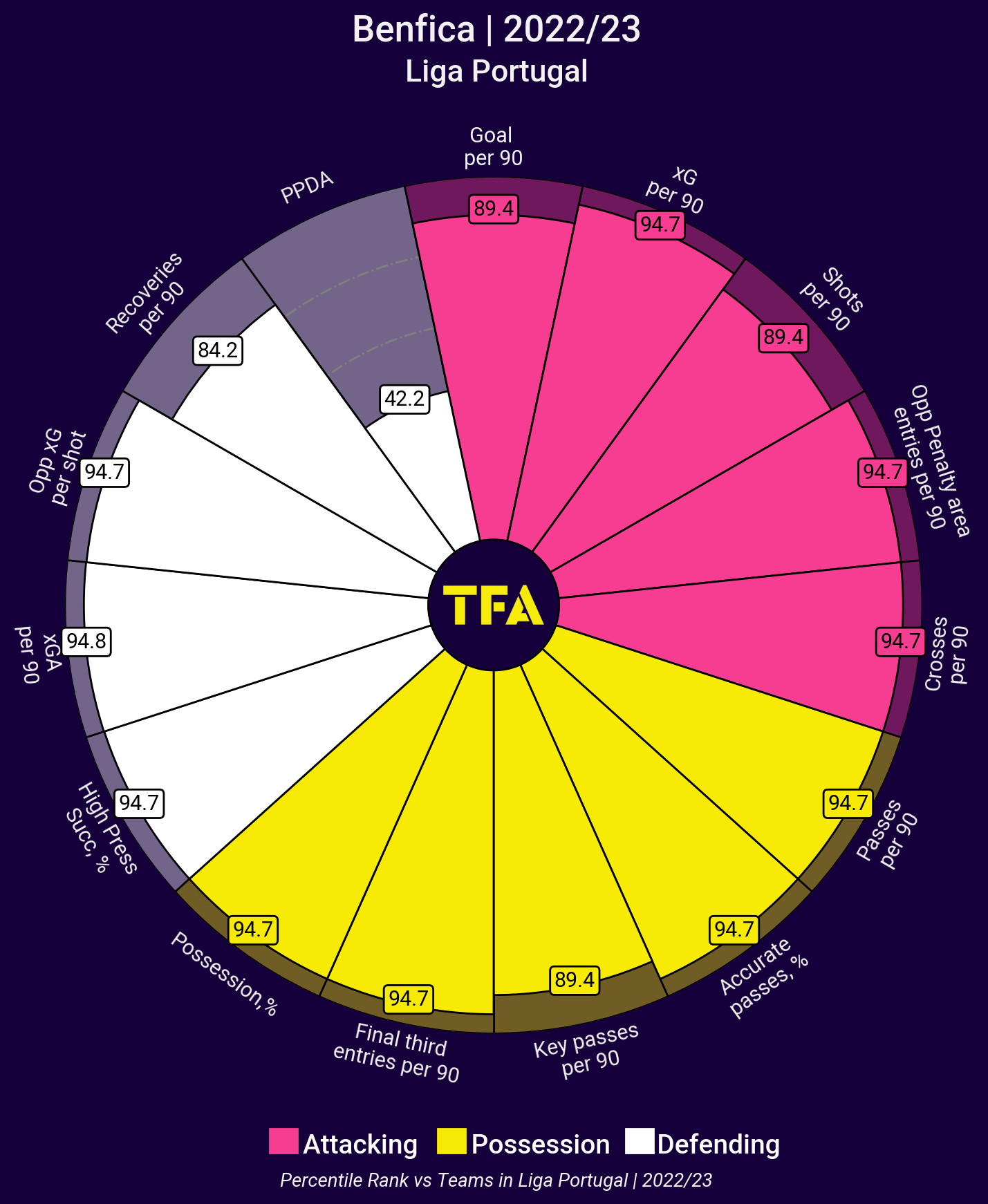 This season, Benfica are the best performer in Liga Portugal. The above viz shows the percentile rank of the team’s stats in comparison to the other teams. We can observe that the Eagles top the percentile rankings in all departments: attack, possession, and defence. Notably, the team has an impeccable rank in terms of xG, key passes, final third entries, xGA, and more. Benfica will aim for all three points against Santa Clara and preserve its advantage at the top of Liga Portugal.

Santa Clara vs Benfica: Positional attacks, counter-attacks, and shots per 90

Santa Clara creates 24.63 positional attacks and 1.75 counter-attacks per match. They have the lowest efficiency rate for positional plays, but their counter-attacking efficiency is slightly better than a couple of teams. At home matches, Santa Clara launches 24.25 positional attacks and 1.50 counterattacks per 90 minutes. We can expect the hosts to focus on containing Benfica’s attacking threats by defending properly. 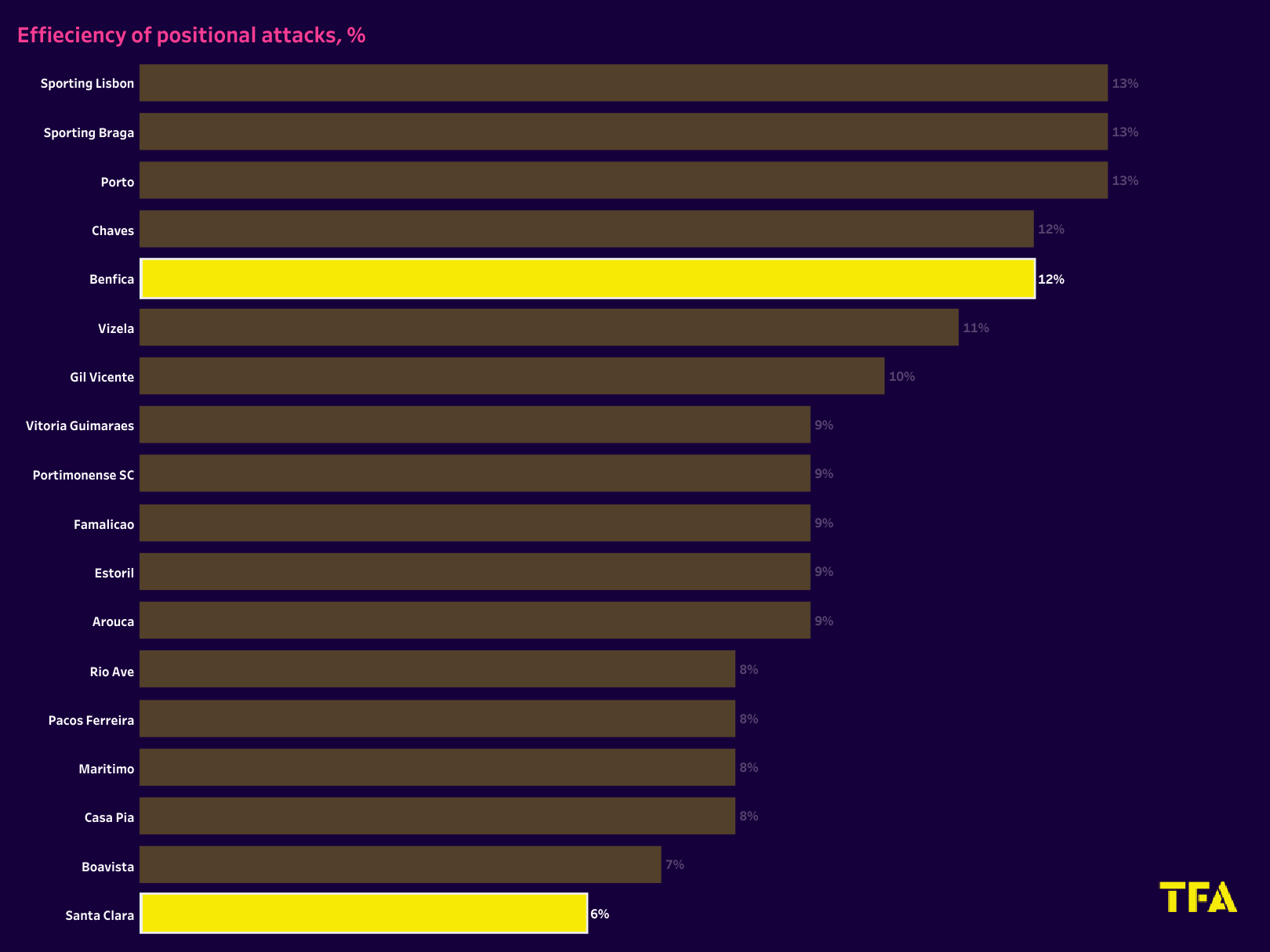 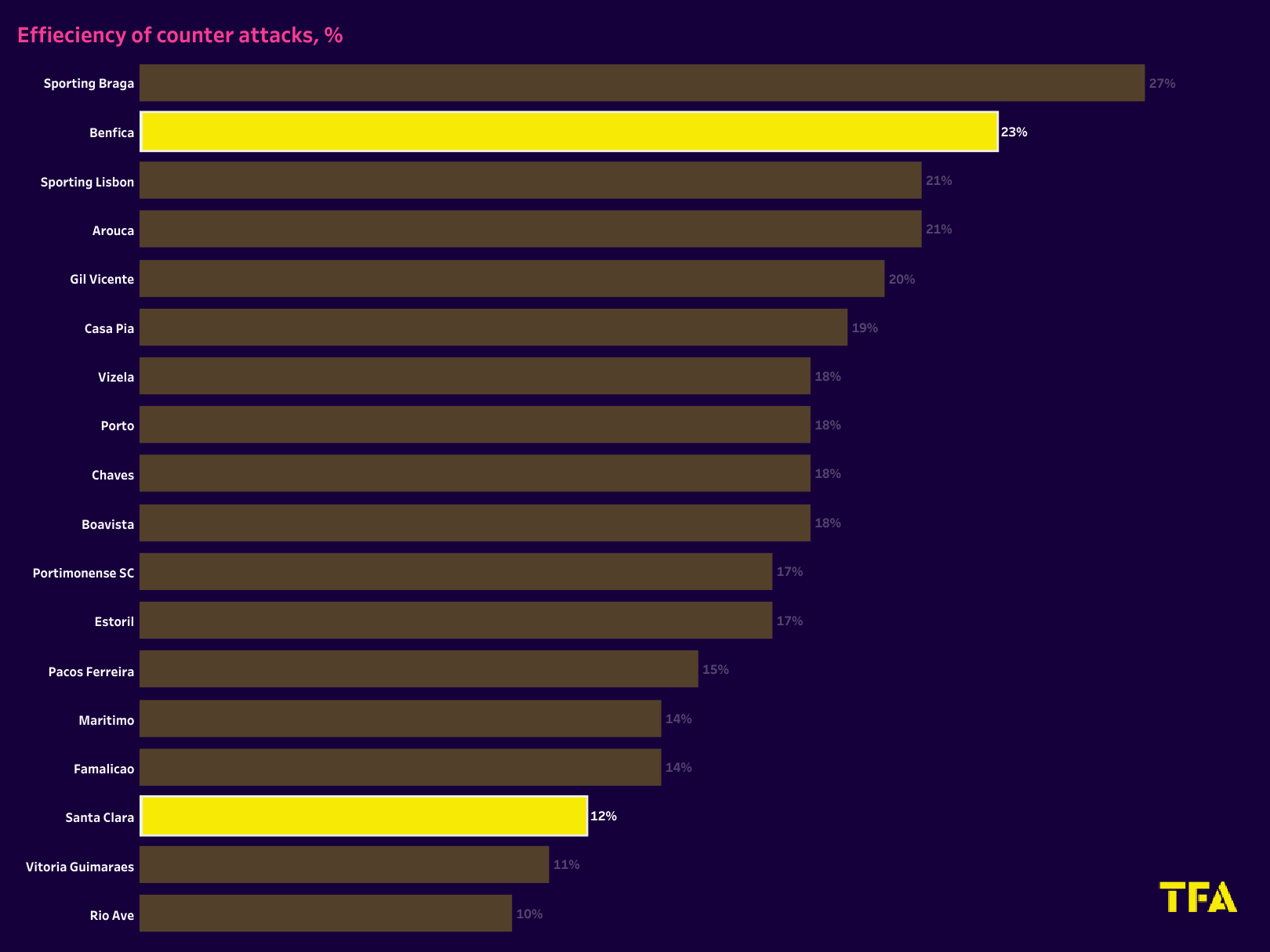 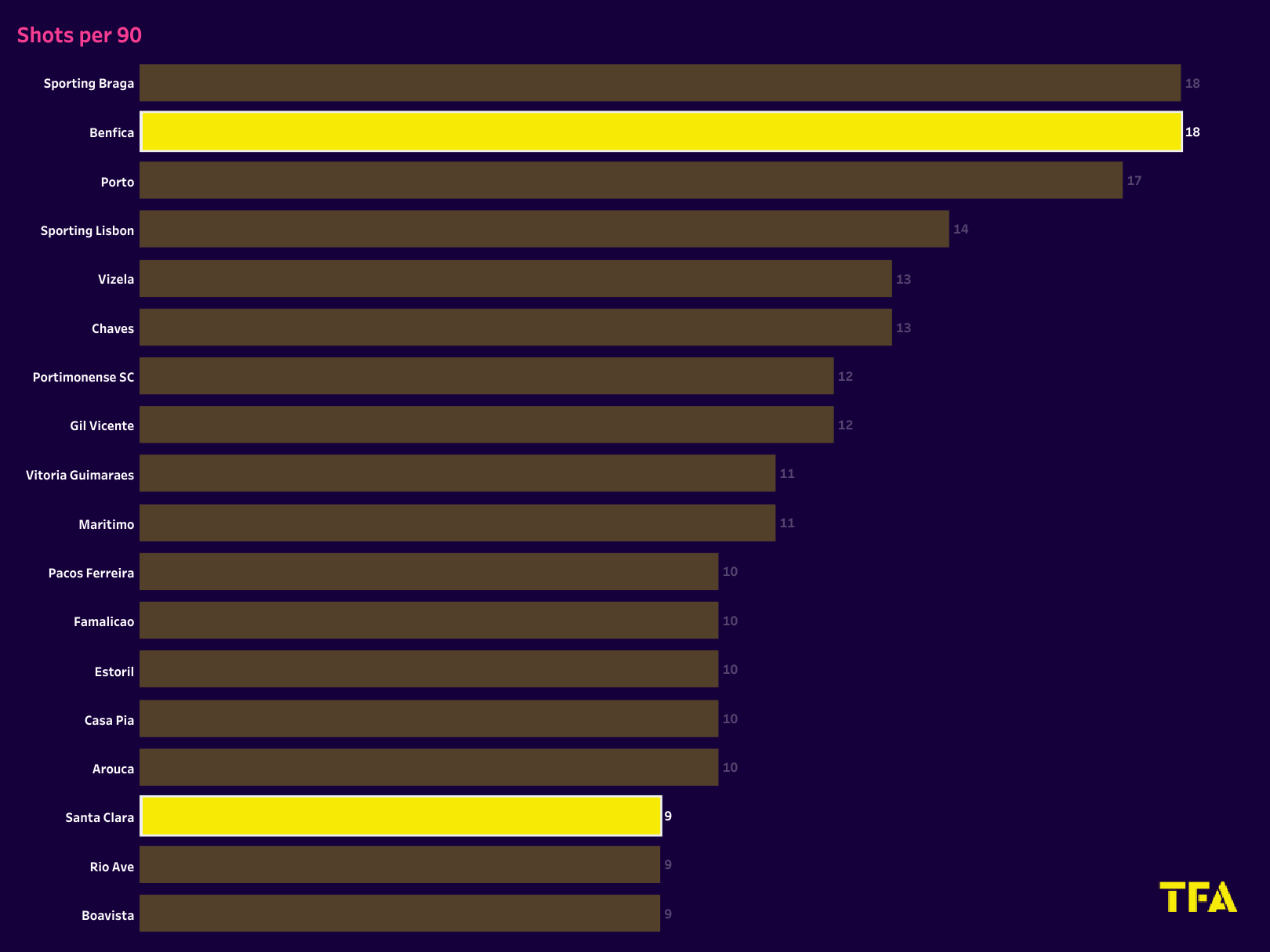 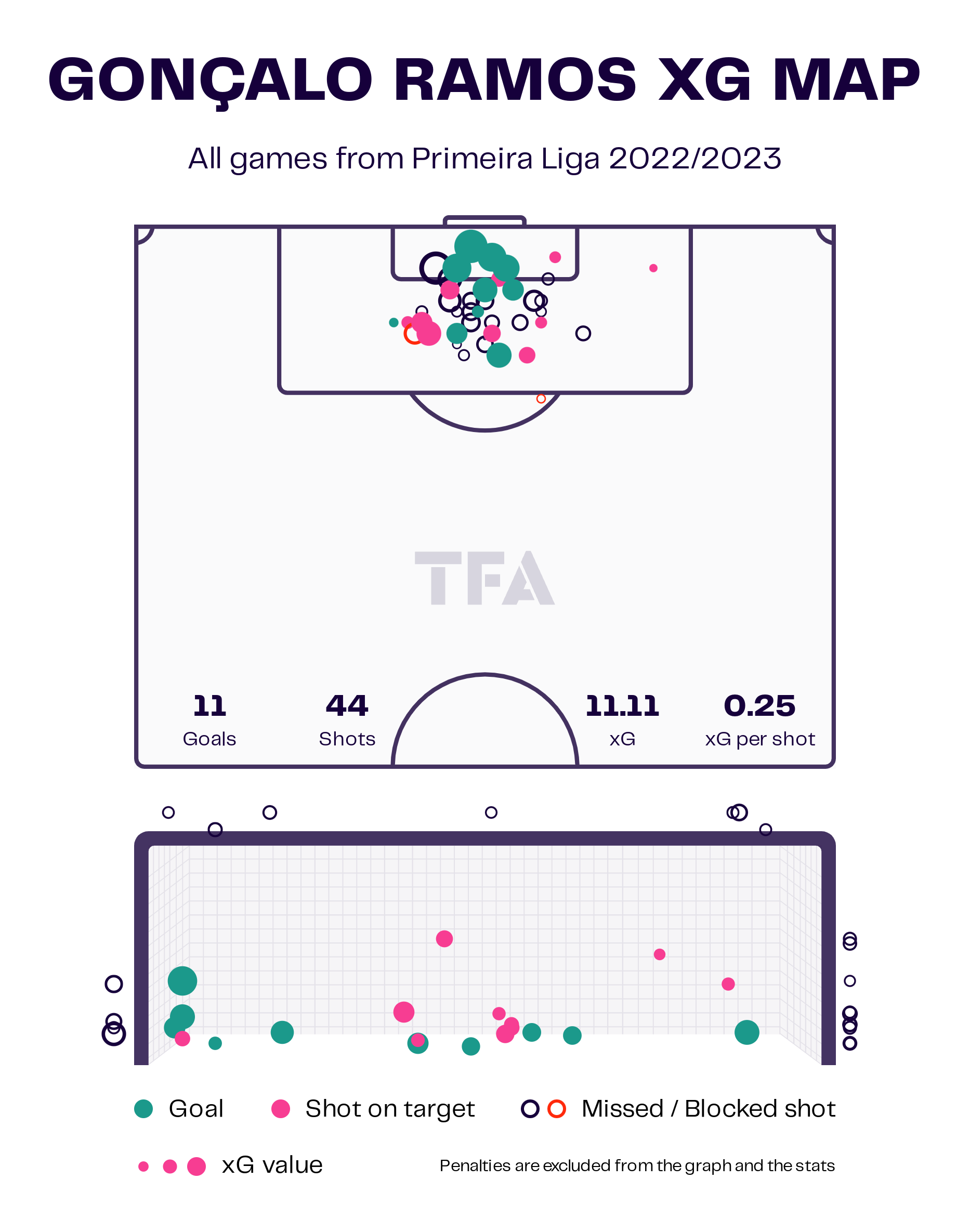 Goncalo Ramos is having an excellent season with Benfica. He is the league’s leading goal scorer this season with 11 goals in 14 appearances and has provided one assist as well. He averages 3.56 shots per match with an accuracy rate of 47.5%. After scoring a crucial brace against Sporting, the 21-year-old will be keen to increase his goal tally further against Santa Clara. 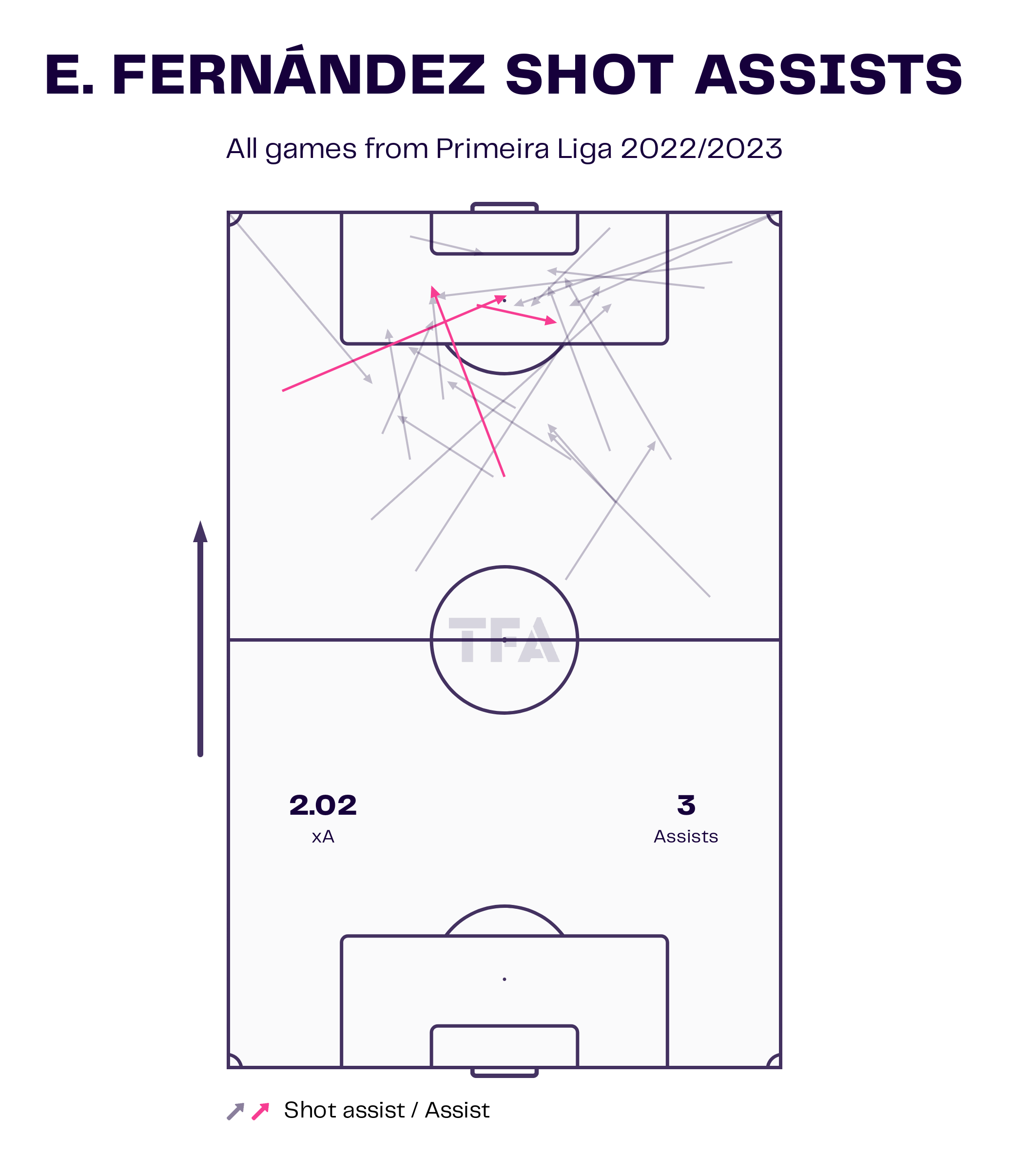 Another player who has been a revelation for Benfica this season is Enzo Fernandez. He has slotted seamlessly into the team and has given strong performances from midfield. The Argentine has created eight big chances, registered three assists, and scored one goal. For Santa Clara to get a positive result, their play will have to keep Enzo Fernandez from imposing his authority in midfield.

Santa Clara is expected to be without Tomas Domingos, Anderson Carvalho, and Marco Pereira due to injuries. Apart from that, the rest of their squad seems ready to play.

Meanwhile, Benfica are expected to name a full-strength starting lineup with no known injuries or suspensions in their squad.

This will be a must-win fixture for Benfica to regain their mojo at the top of the Liga Portugal standings. They cannot afford another slip-up in their charge for the title with rivals lurking in close proximity. Santa Clara, on the other hand, will be motivated to interrupt the league leaders’ progress and build some momentum of their own to ascend from the relegation zone.