Fábio Samuel Amorim Silva, commonly known as Samu, is one of Liga Portugal’s underrated talents. Formerly a Boavista youth, the midfielder has played for Vizela since 2019. He has evolved into a key player for Vizela after helping the club achieve two consecutive promotions in two years. His best performance came in the 2020/21 campaign, in which he scored eight goals and provided eight assists as Vizela finished second in the second division and achieved promotion to Liga Portugal. Samu scored four goals and provided three assists in Liga Portugal last season, as Vizela finished in the lower half. This season, the 26-year-old midfielder has proven essential once again, with Vizela currently in an advantageous position in the top half. He has provided key goal contributions that have helped the team achieve important results against Vitoria, Famalicao, and most recently, Maritimo. Below are some stats that capture Samu’s performances while playing for Vizela in Liga Portugal 2022/23. 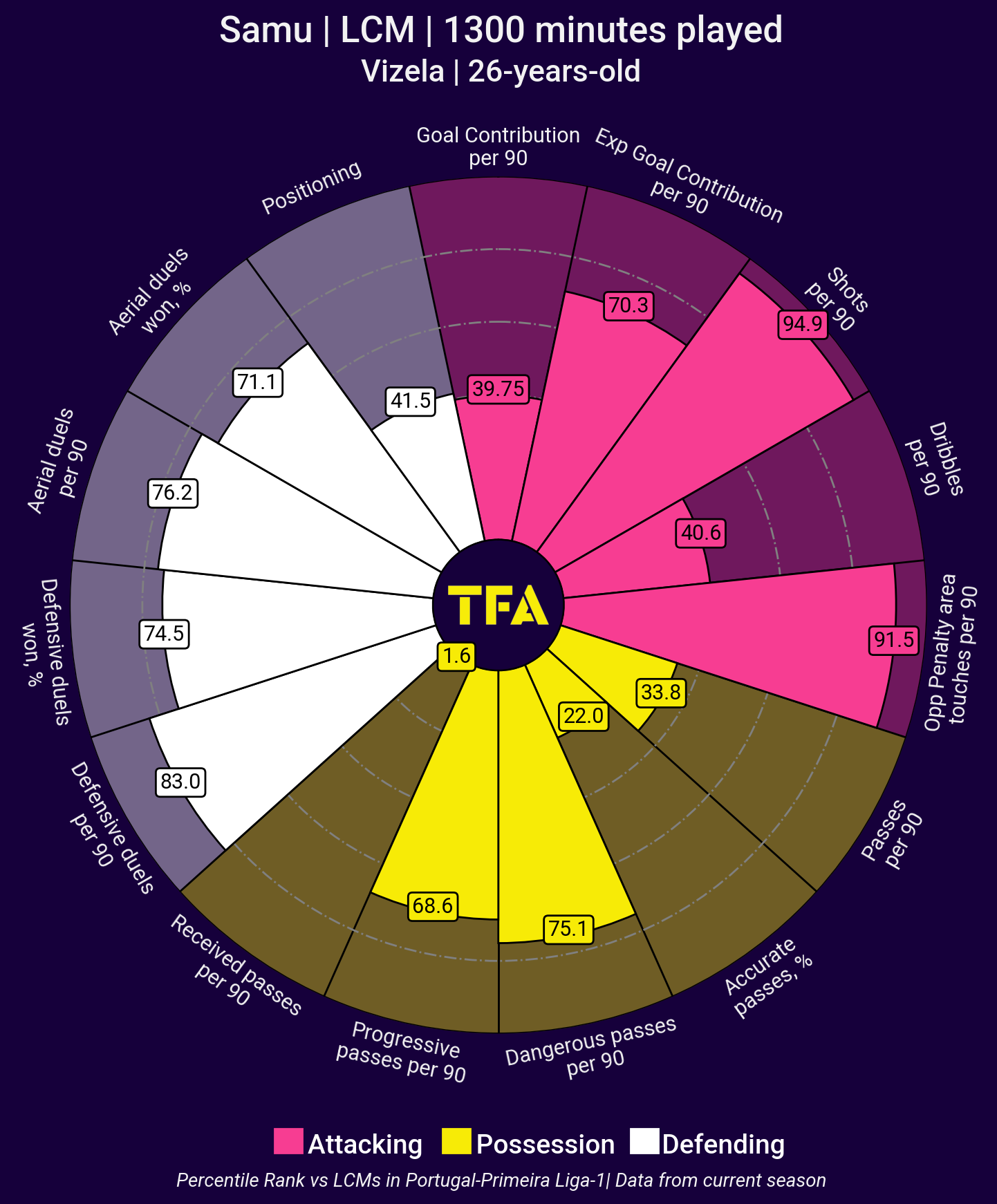 Samu has played in all 16 league matches for Vizela this season, starting in 15 matches and averaging 83 minutes per game. With Vizela currently sitting eighth in the table, Samu has been one of the best performers on the team. The above viz shows the percentile rank of the player’s stats compared to other left-central midfielders in Liga Portugal. It can be observed that Samu ranks highly for attacking indicators like shots and penalty area touches. He also does well in the possession and defence departments, with a good percentile rank for dangerous passes, progressive passes, defensive duels, and aerial duels. 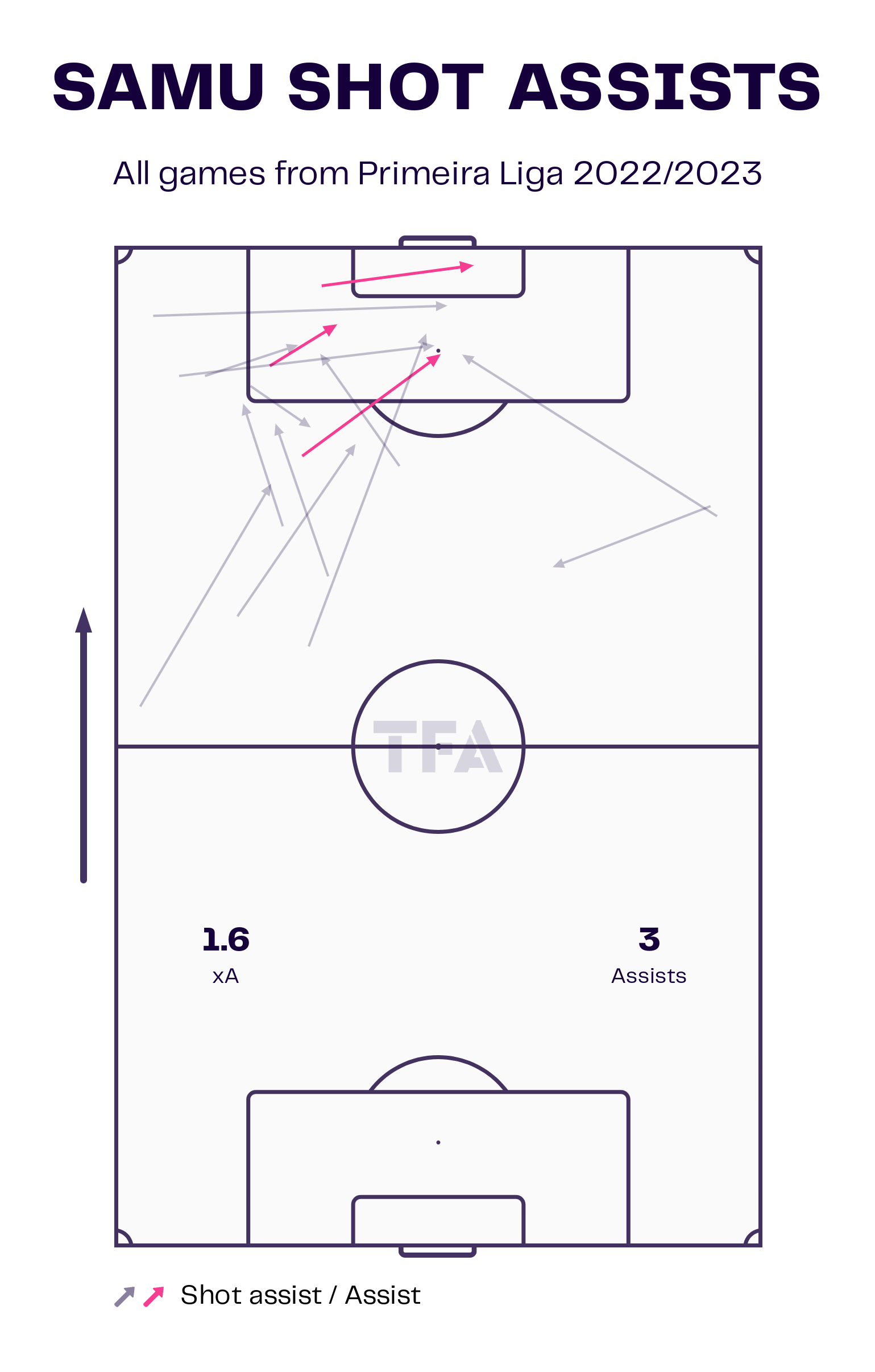 Samu is an attacking midfielder who often contributes to the team by creating goal-scoring opportunities. He has registered three assists for Vizela this season, which have come in the last two Liga Portugal matches. From the viz above, we can see that Samu creates chances from wide areas with crosses as well as through defence-splitting passes from the central areas. In addition to generating 0.92 shot assists per match on average, he has scored two goals this season, both of which were in the fixture against Vitoria SC. 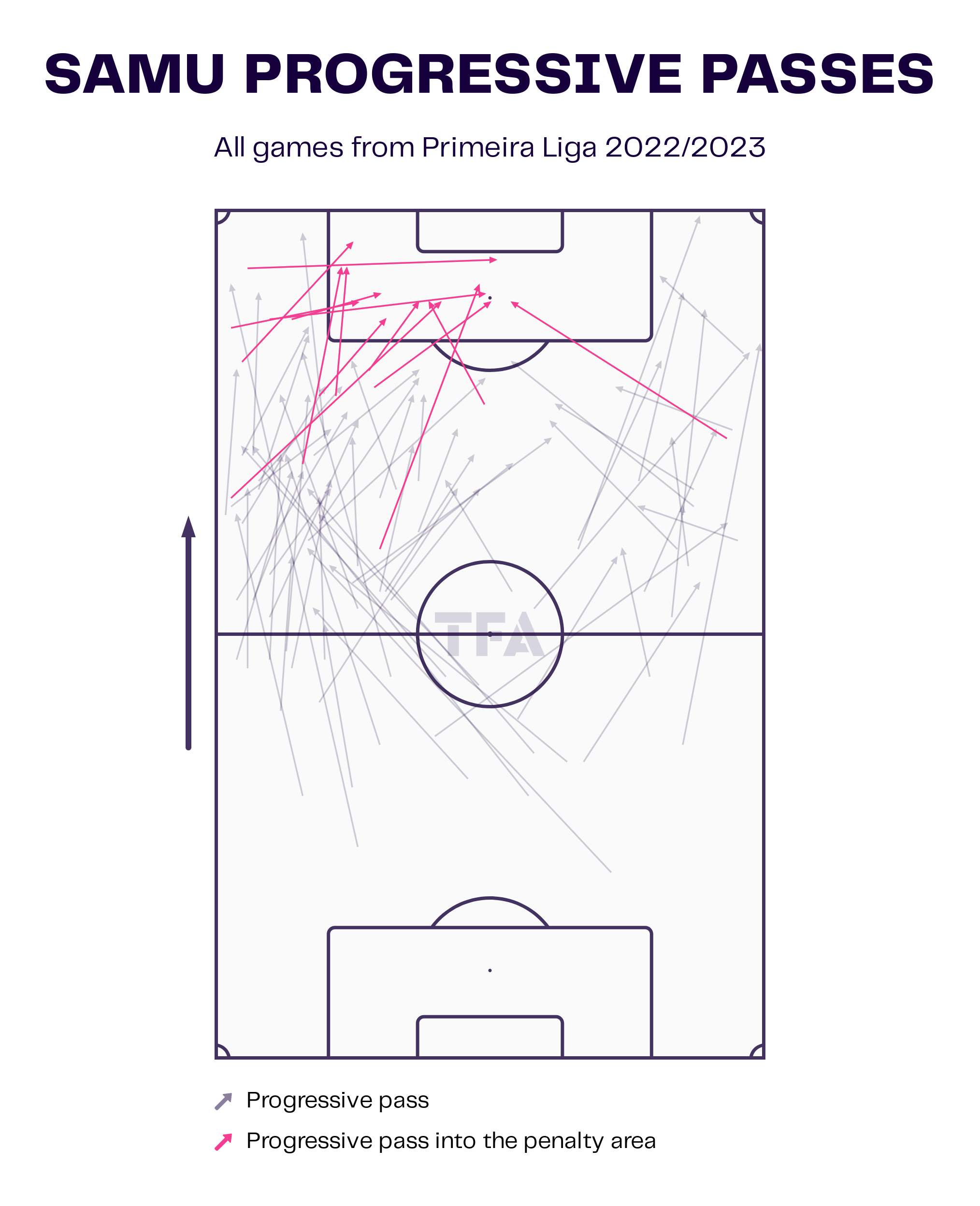 Samu is currently averaging 0.18 assists per match with an xA rate of 0.10. The above viz illustrates the midfielder’s ability to find progressive passes to the advanced attacking positions. He releases most of the progressive passes down the flanks, and quite a few of them have reached the penalty box as well. Samu makes 6.38 passes to the final third and 1.78 passes into the penalty box per match. Additionally, he has created three big chances this season and averages 1.2 key passes per 90 minutes. 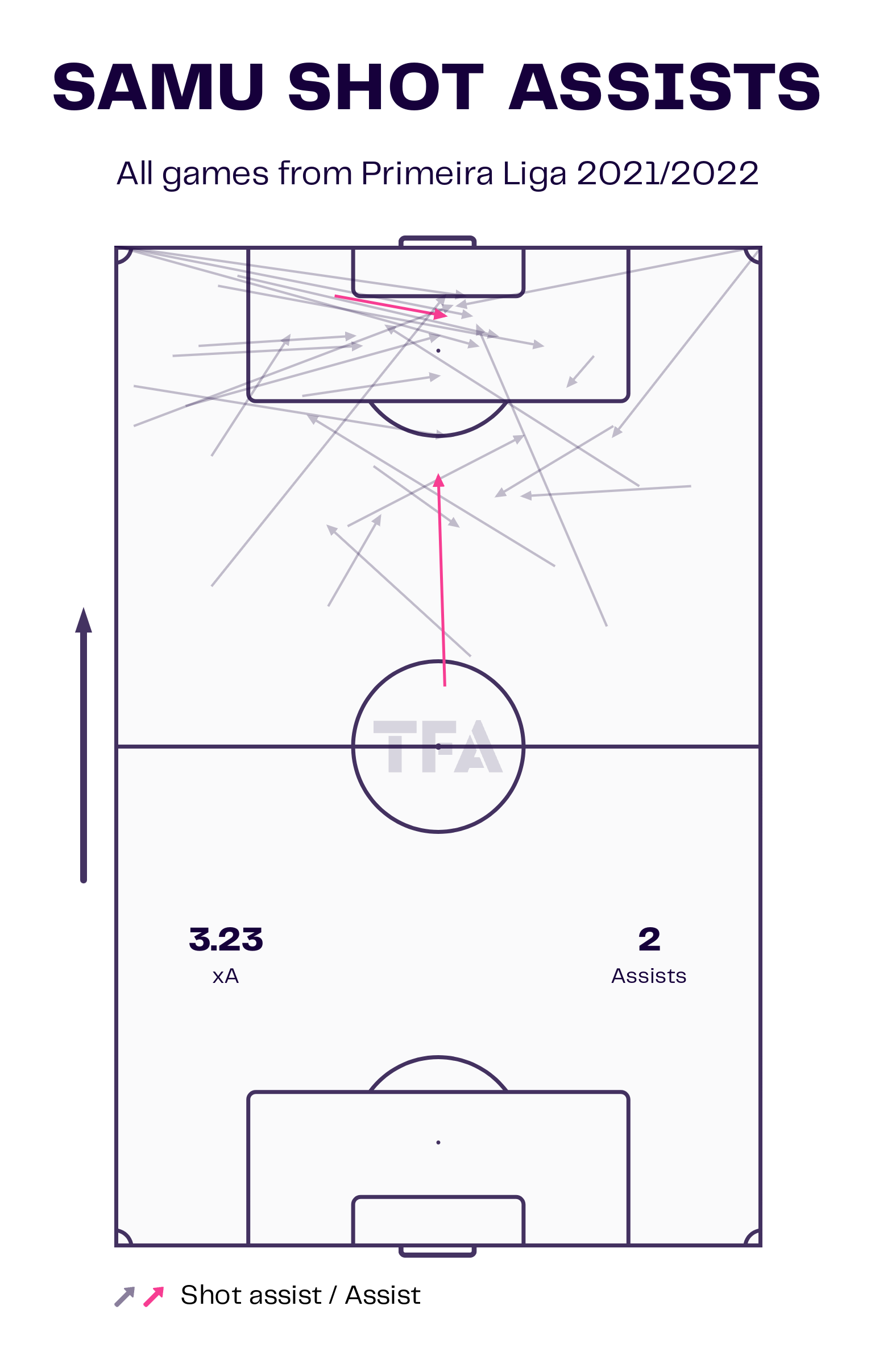 In the 2021/22 season, Samu scored four goals and provided three assists in 30 appearances for Vizela. He was averaging 0.11 xA and making 0.89 shot assists per match. He created five big chances while averaging 1.1 key passes per 90 minutes. The attacking midfielder is already on course to improve on his goal-contribution tally from last season and also possesses better stats this season. His creativity from the centre of the park has helped Vizela gain crucial points from a number of fixtures in a challenging season.

Samu with the ball 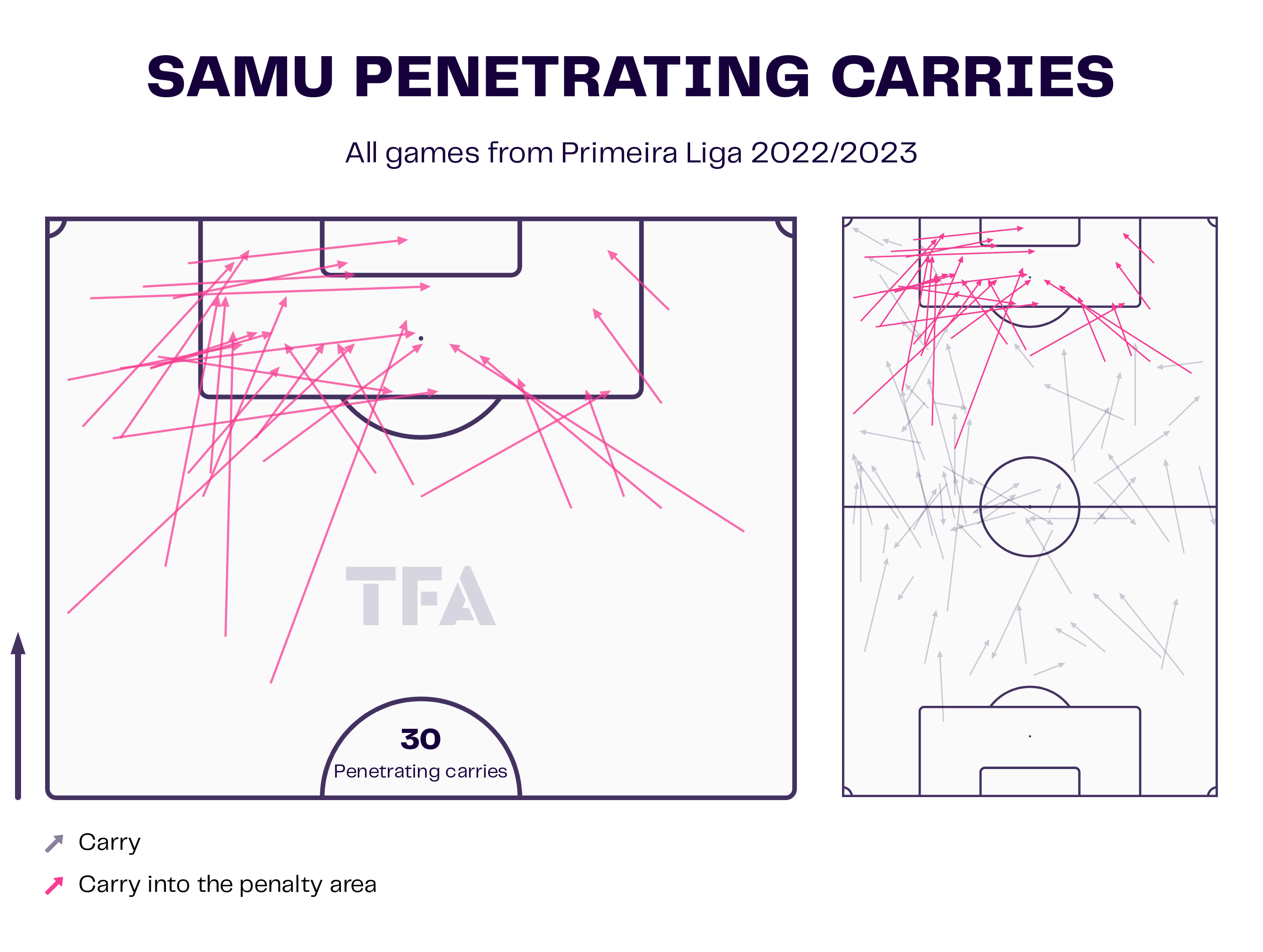 Apart from his strong passing ability, the 26-year-old midfielder can also dribble with the ball. His diagonal and vertical runs can penetrate the opponent’s defensive lines in the final third. The above viz shows the penetrating carries made by Samu in Liga Portugal 2022/23. We can observe that he is well capable of making penetrating carries into the box, with 30 such instances seen so far this season. 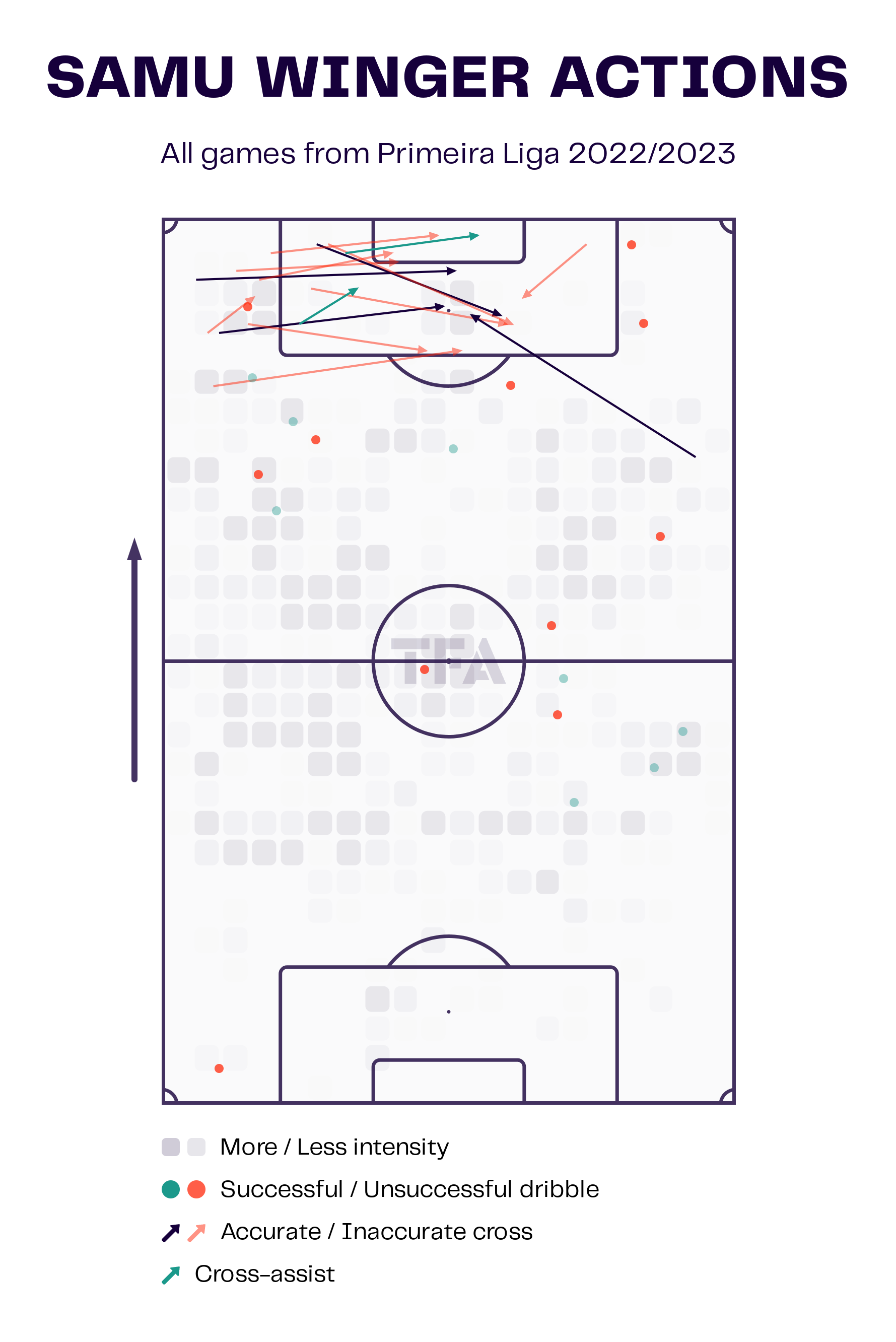 Samu tends to drift wide to provide width for the attacking moves. He delivers crosses into the box and sometimes takes on players 1v1. The viz above highlights the winger actions performed by the Vizela midfielder this season. Samu attempts 1.23 dribbles per match with 40% accuracy and 1.11 crosses with 33.3% accuracy. Furthermore, he makes 1.96 touches in the penalty area per match. 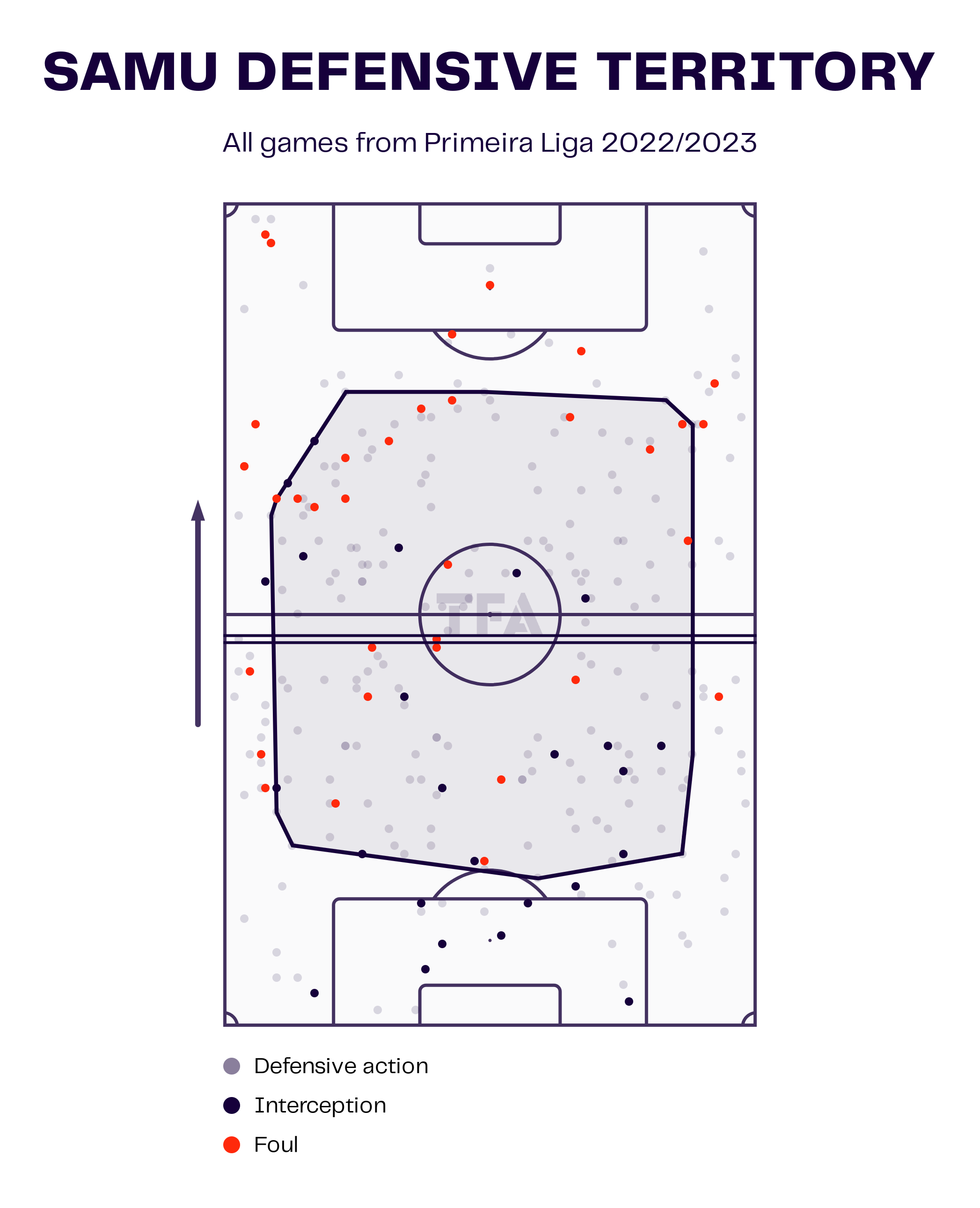 In addition to the creative attributes, defensive contributions are another strong characteristic of Samu. The viz above shows the player’s average defensive territory this season. It can be observed that Samu is involved in a lot of defensive actions all over the pitch, including a few crucial ones in his penalty box. He makes 7.24 recoveries and 4.36 interceptions per match. Furthermore, he attempts as many as 9.15 defensive duels per match with a win rate of 60.4% and 2.76 aerial duels with a 51.1% win rate.

Samu has proven his worth for Vizela this season. Apart from being a creative player from midfield with his abilities on the ball, he also works hard without it. Vizela will expect the same consistency from the 26-year-old winger as they look to push for a top-half finish in Liga Portugal.