Ricardo Horta has been one of the most consistent performers in Liga Portugal over the last few years. Formerly a Benfica youth, the winger has been playing for Braga since 2016 and has developed into a top-class player. With over 300 appearances under his belt, Horta holds the record for the club’s all-time top goal scorer with 100 goals.

In 2021/22, Horta enjoyed the most prolific season of his career with 19 goals in the top division. He finished third among the league’s highest scorers, while his team finished fourth and qualified for the UEFA Europa League. The 27-year-old’s excellent displays at the club level earned him a spot in the Portugal team at the World Cup, where he returned the favour by scoring a goal against South Korea. Let’s now look at some stats that capture Ricardo Horta’s performances for Braga in the current season. 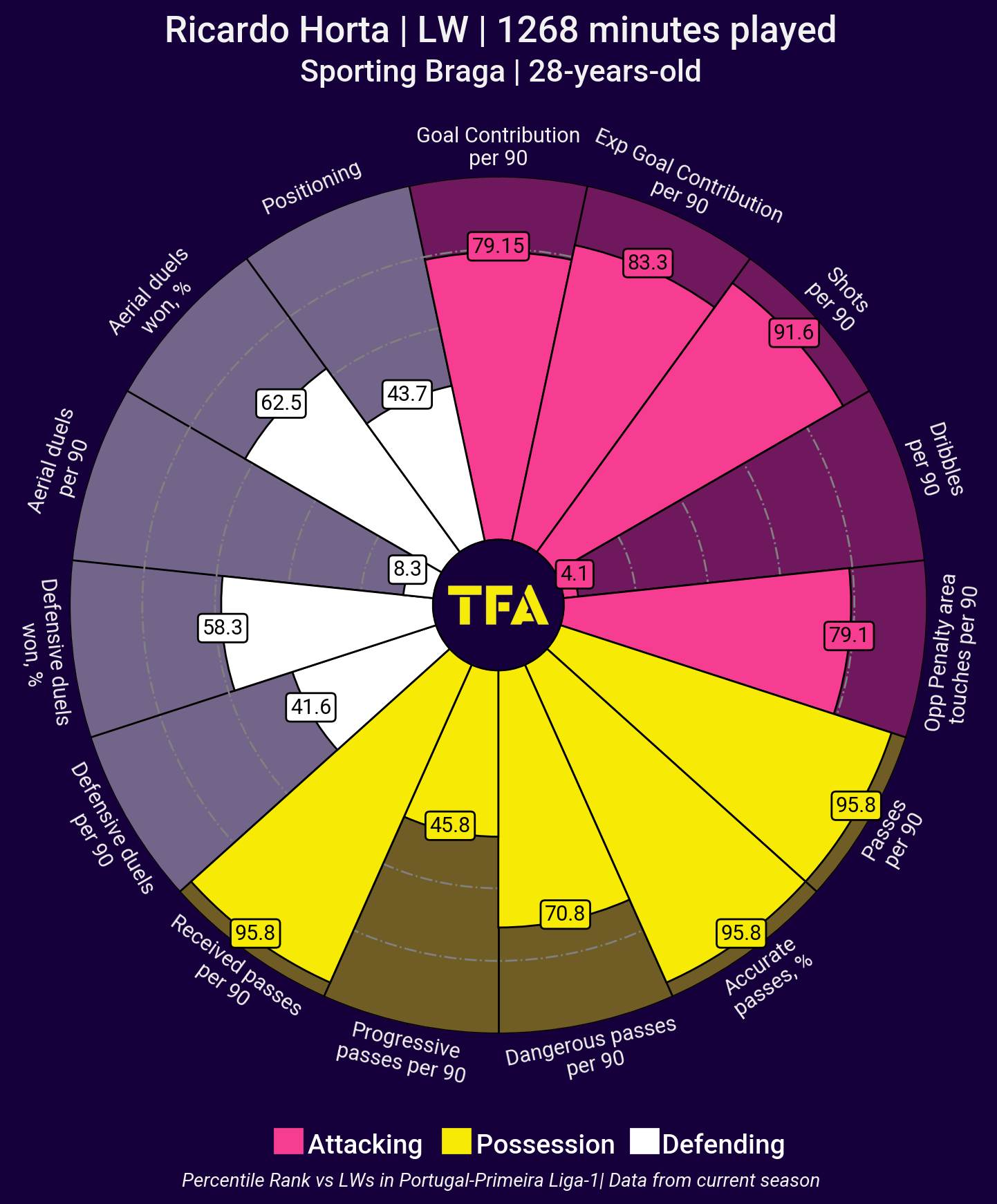 The above viz shows the percentile rank of the player’s stats in comparison to other left-wingers in Liga Portugal 2022/23. We can see Ricardo Horta excelling in the attacking and possession departments. He ranks at the top for indicators like shots, expected goal contributions, and a number of passing parameters. He also possesses a high rank in indicators like goal contributions, penalty area touches, and dangerous passes. While the defence is not his strong suit, he has solid numbers in defensive and aerial duels. 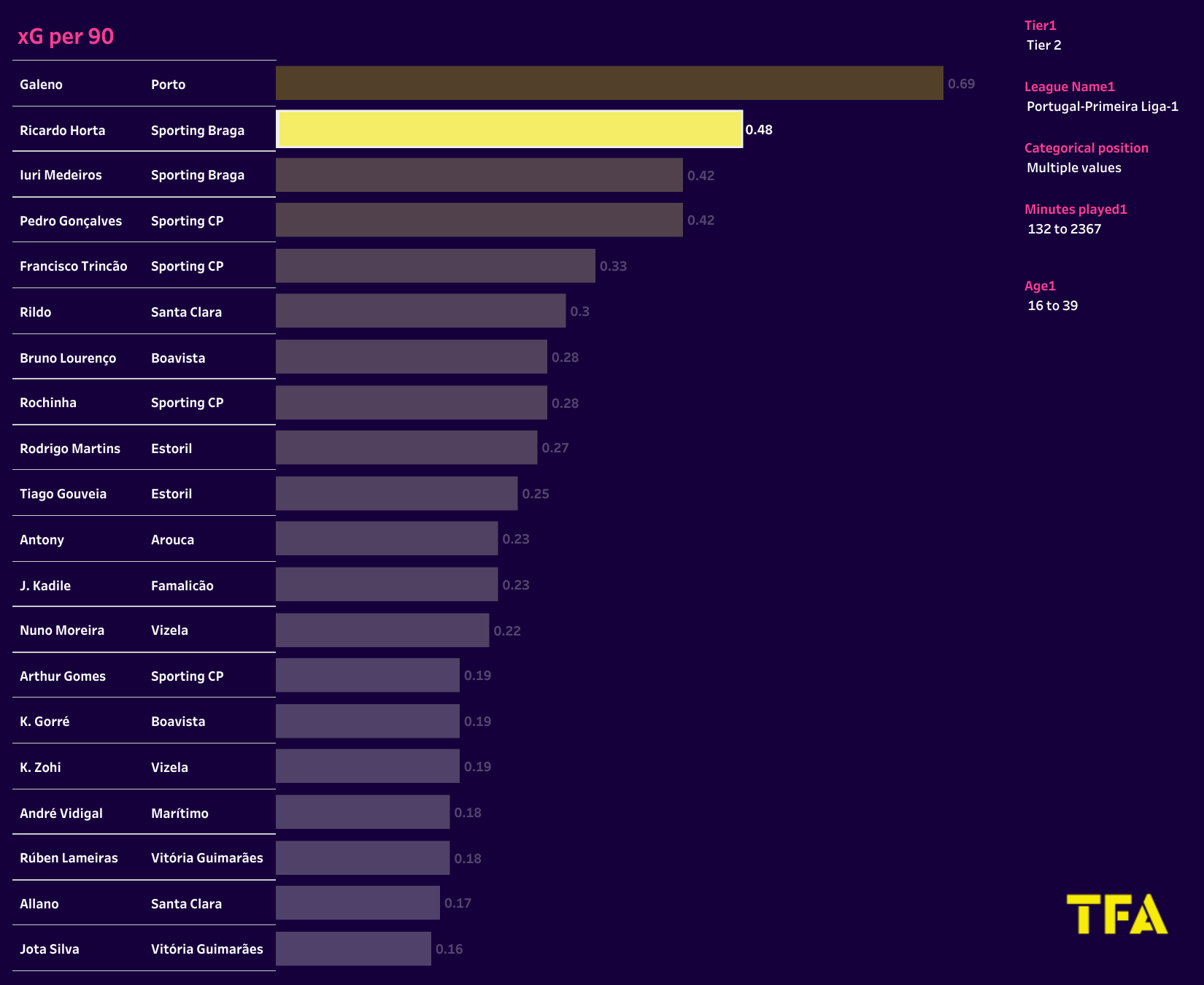 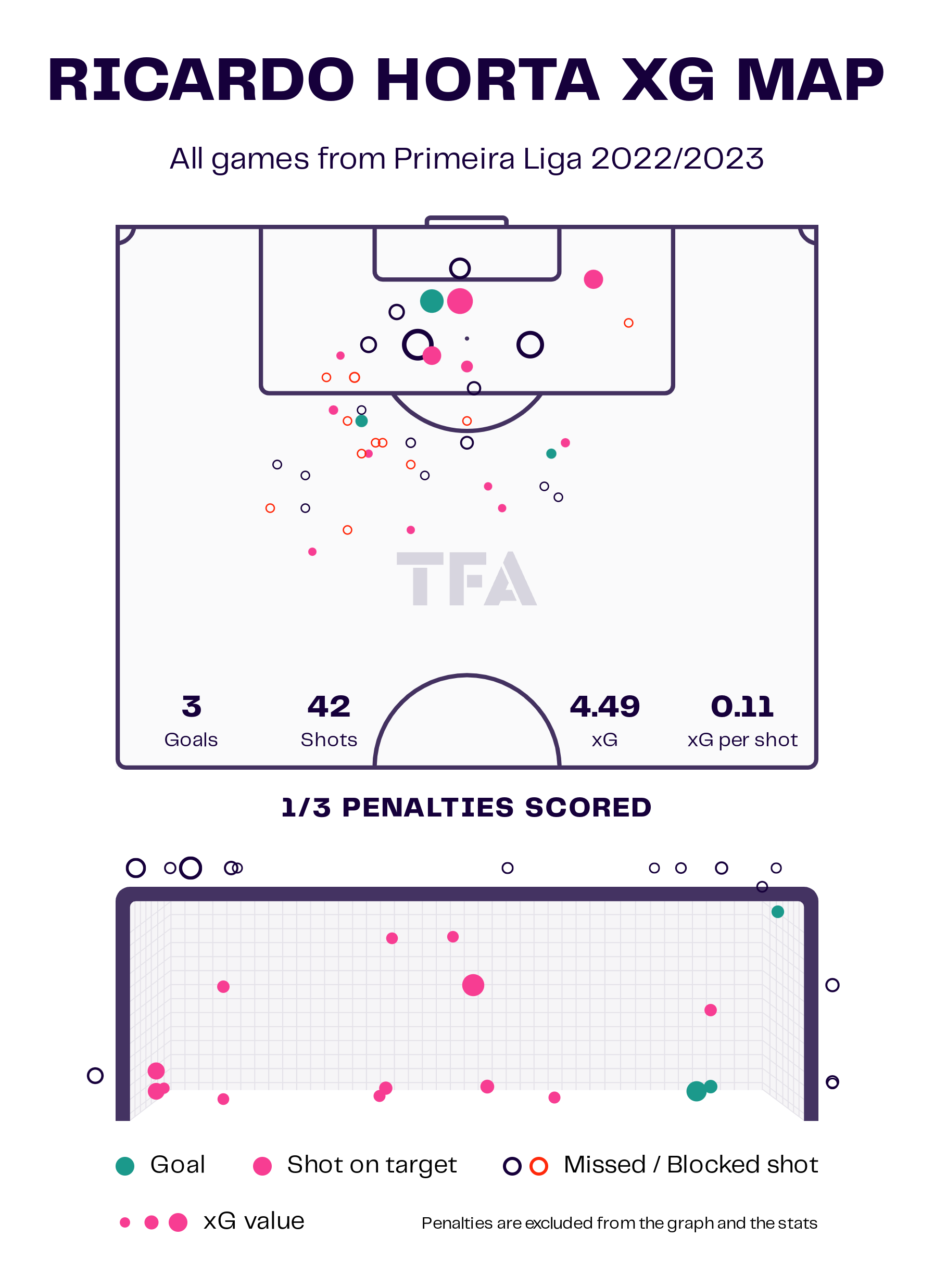 Ricardo Horta has scored four goals and provided four assists in 13 matches this season, with Braga currently in third place. His average xG rate of 0.48 is one of the best in the league among players featuring as wingers. The viz above shows the player’s shot map from Liga Portugal 2022/23. He has attempted 42 shots at an average of 3.2 shots per match with 40% accuracy. Ricardo takes most of his shots from areas around the edge of the box, resulting in two of his goals. He has also attempted three penalty kicks, converting only one of them. 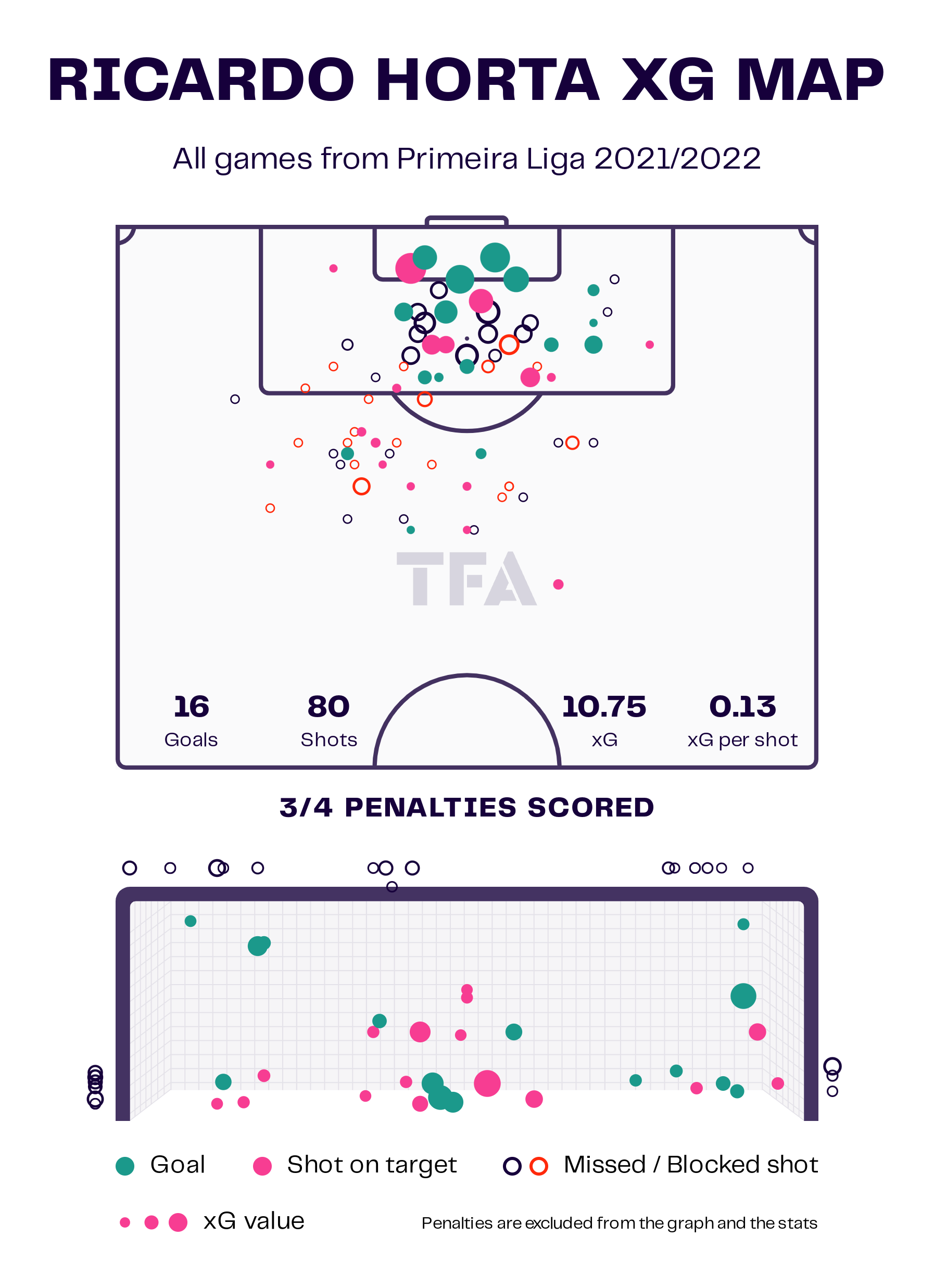 In 32 appearances last season, the Braga captain scored 19 goals and assisted five others. His average xG rate was slightly lower at 0.41, and he registered a lesser number of 2.5 shots per match with 44% accuracy. While he is getting more chances to score goals this season, his rate of conversion has decreased. However, he is on course to better his assist tally from the previous year. 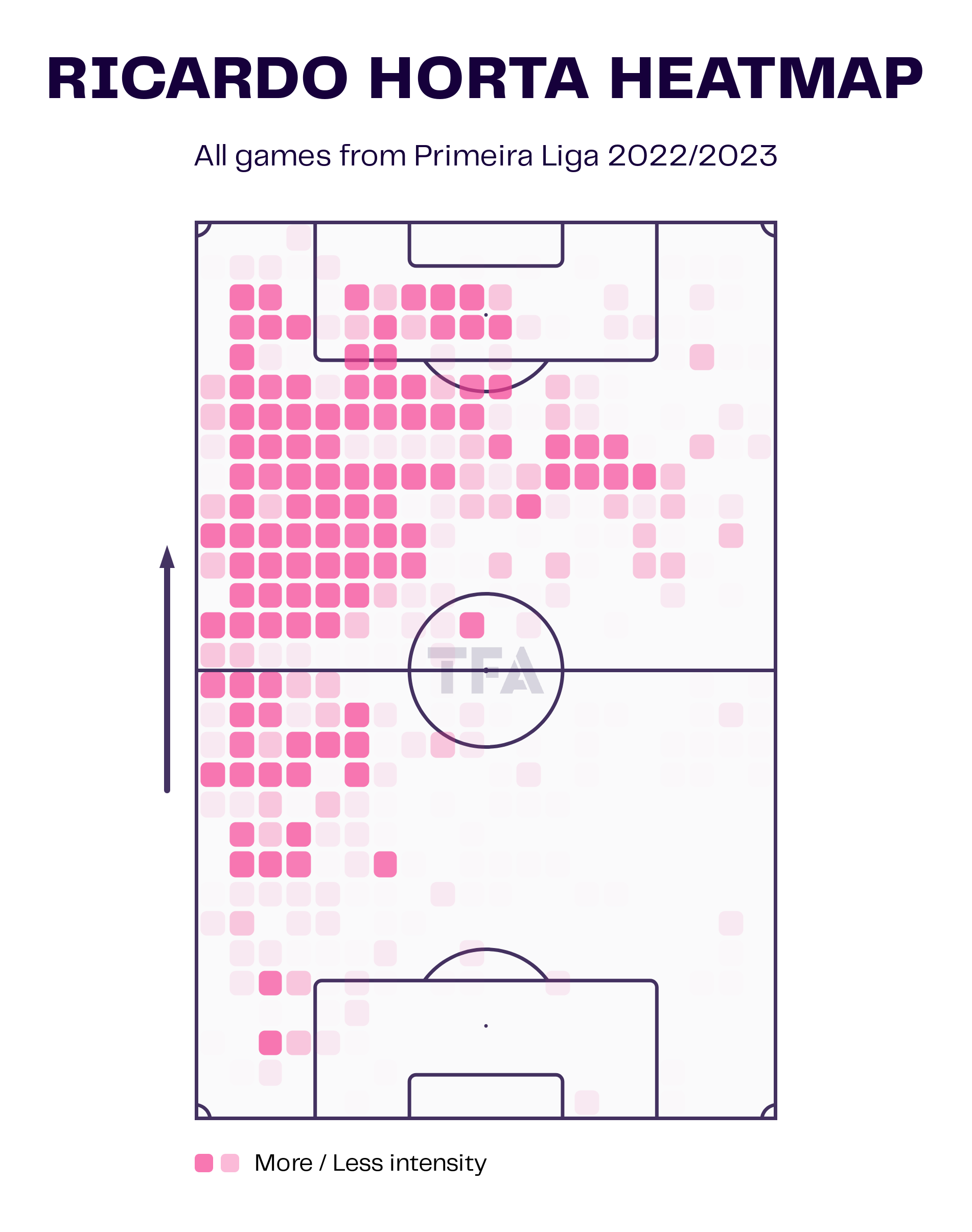 Ricardo Horta is most efficient on the left flank for this Braga side but also possesses the versatility to play in various roles across the attacking line. From wide midfield, he assists in linking up play and creating attacking moves. The viz above depicts the player’s heat map for the current season. We can see that Ricardo’s actions are most intense on the left side of the final and middle third. He also covers a good amount of ground in the central attacking areas. 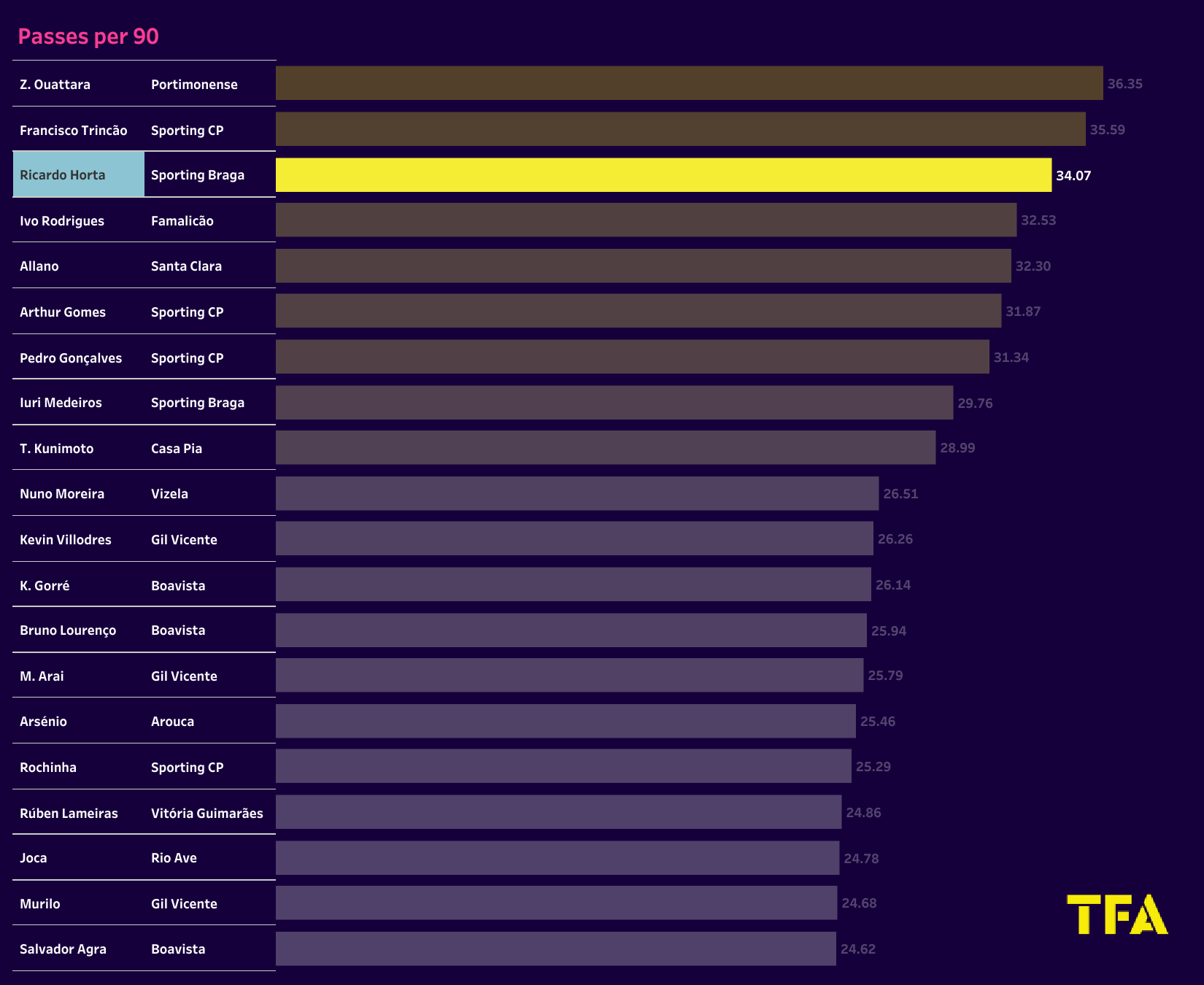 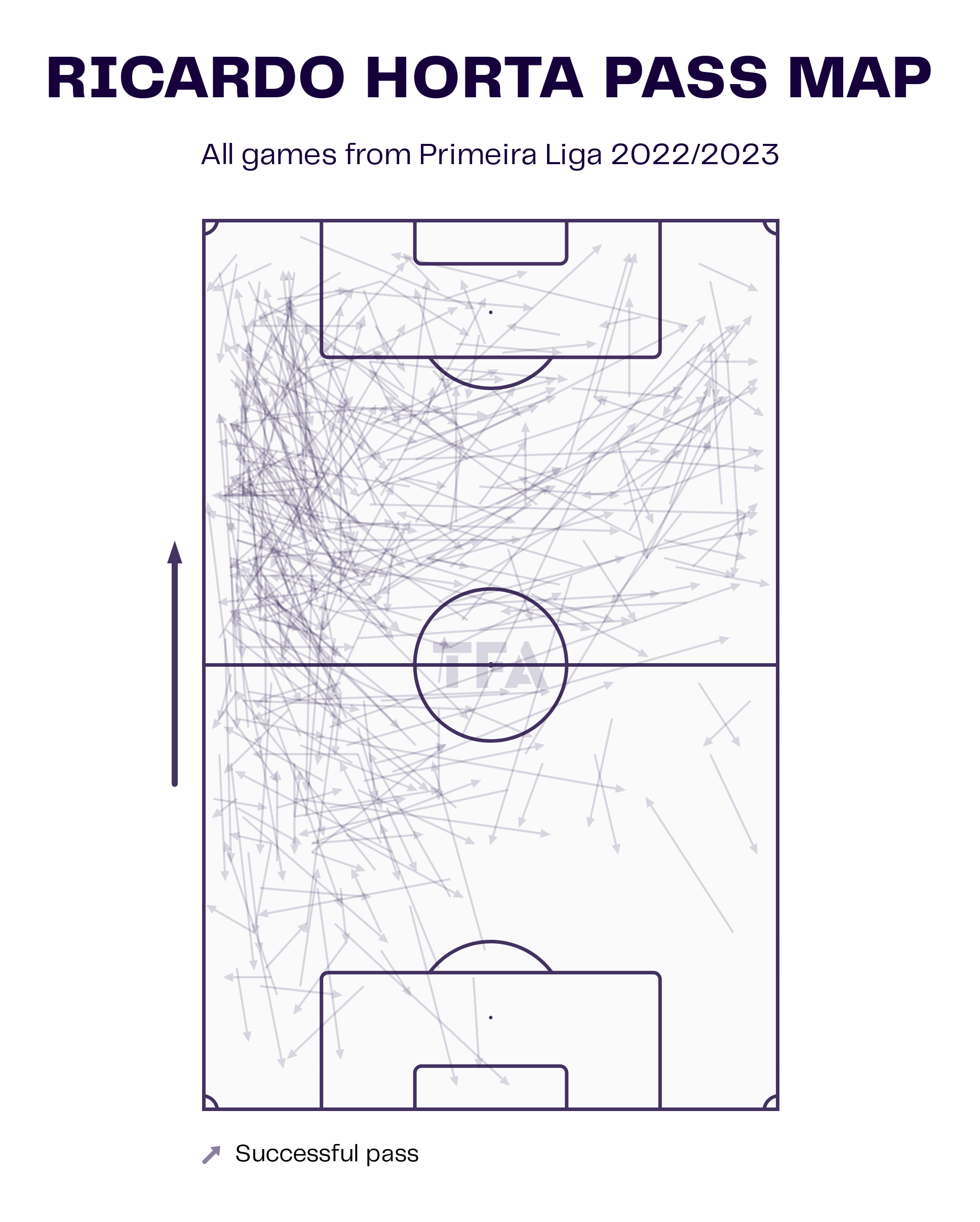 The Braga winger stays involved in the possession and circulation of the ball for his team. His technical ability enables him to stretch the opposition’s lines with a range of passing options. The player’s pass map shows a cluster of passes on the left side along with lots of passes into the central attacking regions as well as towards the other flank. As a wide player, Ricardo averages a high number of 34.07 passes per match with 85% accuracy. 4.7 of these passes are to the final third, and 2.7 are toward the opposition’s penalty area. 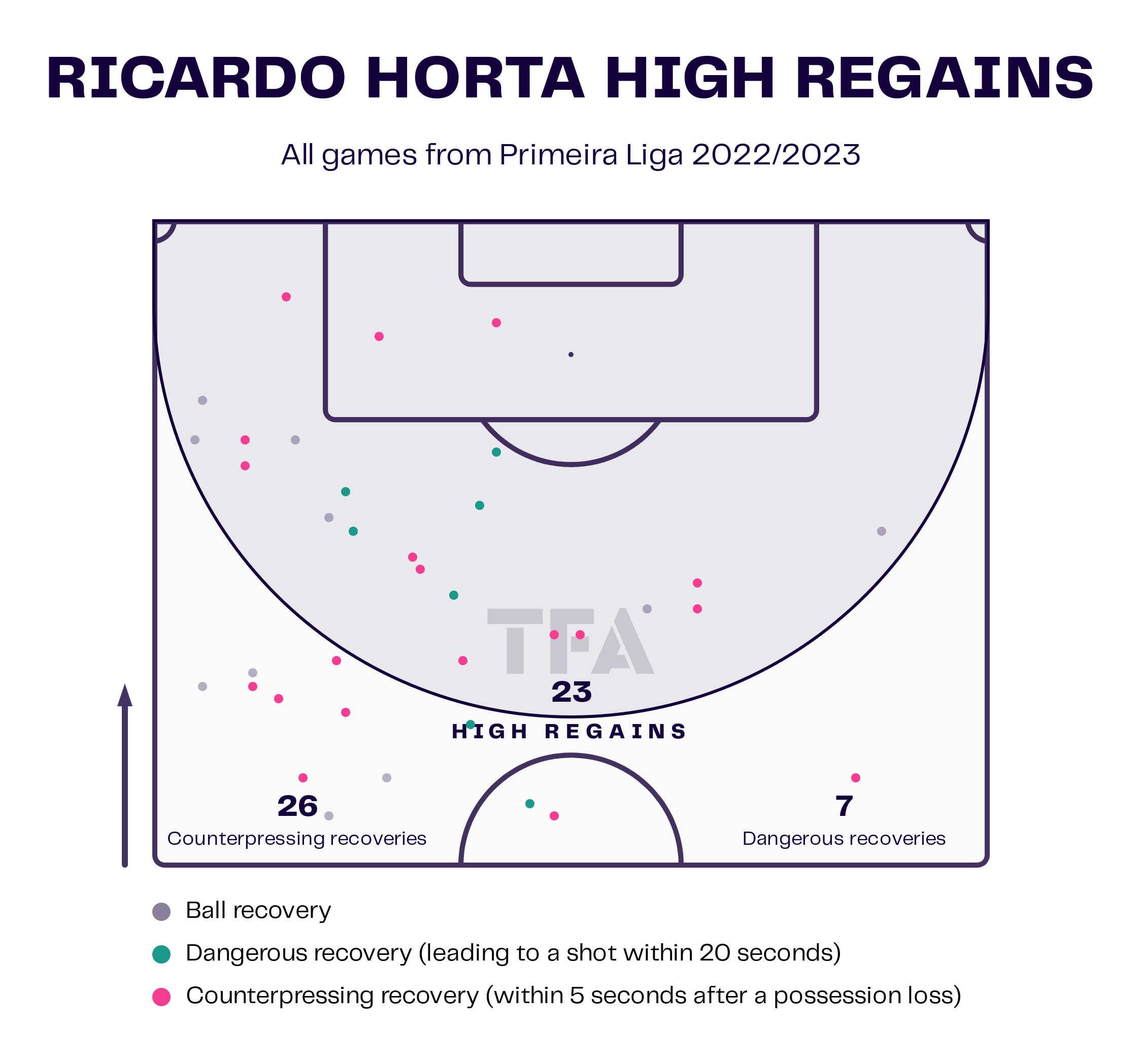 Another aspect of Ricardo Horta worth highlighting is his ability to win the ball in forward positions. He has made 23 high regains this season, along with seven dangerous recoveries that have led to a shot. Furthermore, he averages 3.12 interceptions per match and wins 48.1% of his ground duels and 33.3% of his aerial duels.

Ricardo Horta has emerged as Braga’s star player in the last couple of seasons. He is a technically gifted player, and the combination of his goal-scoring threat and his ability to provide assists make him a complete winger. Braga will be hoping for the same levels of consistency from the 27-year-old as they look to secure a top-three finish.