Benfica player Rafa Silva is one of the stars of Liga Portugal. He is vastly experienced and successful at both club and country levels. The 29-year-old initially signed for Feirense and then moved to Braga before Benfica came calling in 2016. Since then, he has been one of the most consistent goal contributors in the Portuguese top flight. The 2018-19 season was his best thus far, where he scored 17 goals with three assists. Currently, he is amidst another impressive season with the Eagles, with six goals and two assists to his name already. Additionally, his four goals and an assist in the UEFA Champions League 2022/23 helped his team qualify for the knockout stages as group winners ahead of PSG and Juventus. Below are some stats that capture Rafa Silva’s impressive performances with Benfica in Liga Portugal. 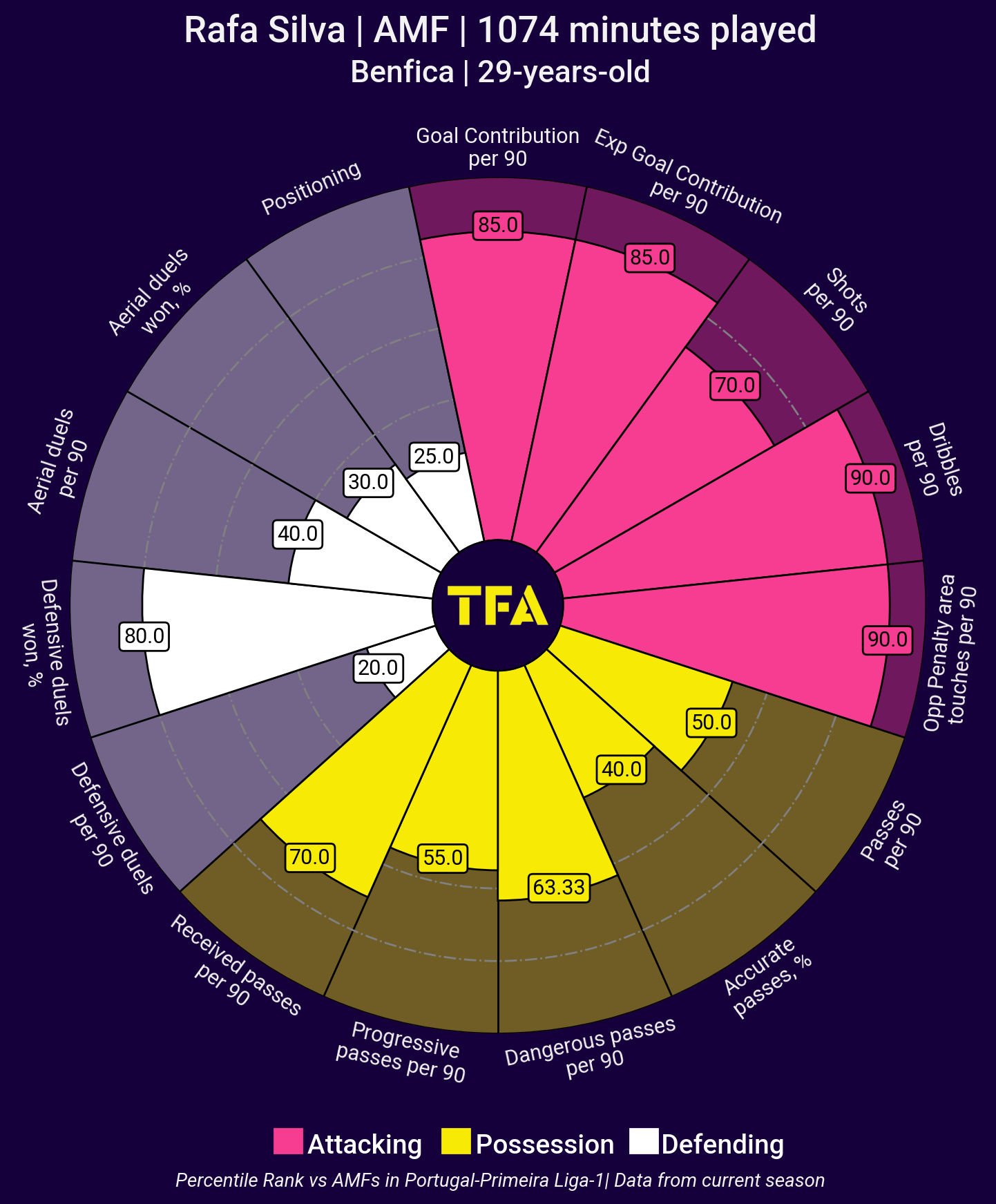 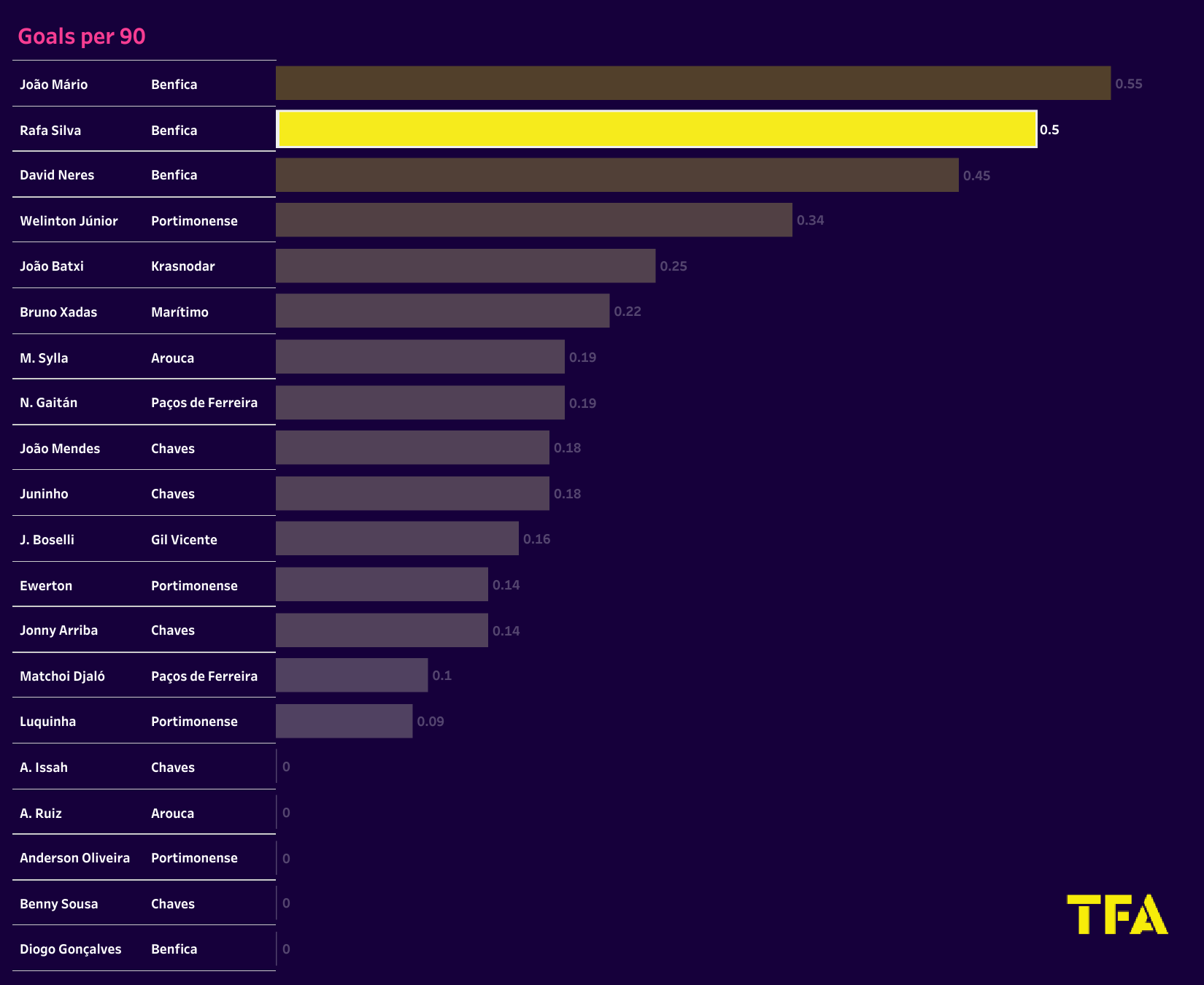 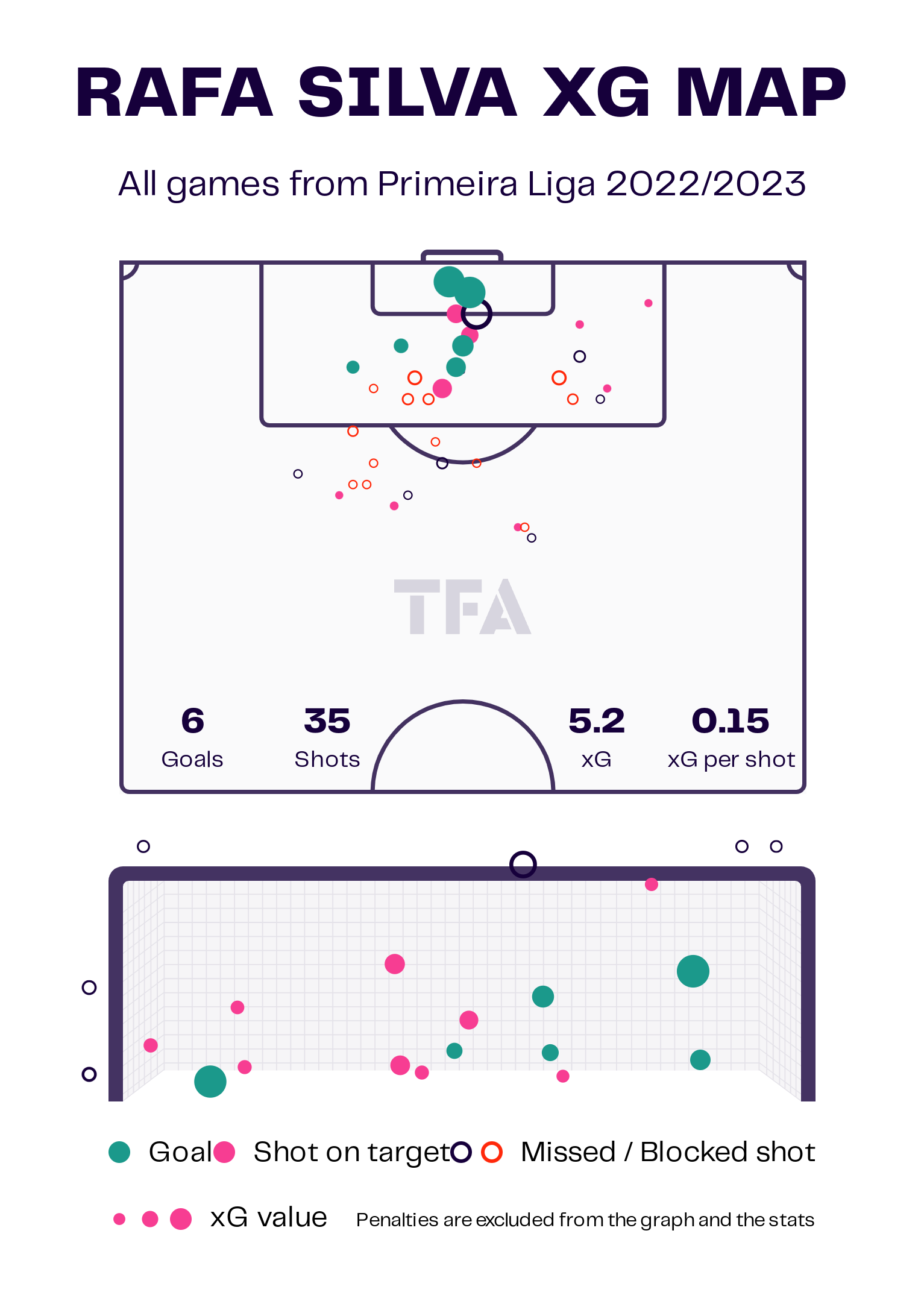 With six goals to his name, Rafa Silva is currently the joint second-highest goal scorer for Benfica in Liga Portugal 2022–23. His current average of 0.46 goals per match is one of the highest among other players in a similar position. The viz above depicts the player’s shot map from this season. He has attempted 35 shots, with the majority of them coming from inside the penalty box. While all his goals have come from inside the penalty box, two of them have come from inside the 6-yard box. He takes an average of 2.7 shots per game with an accuracy rate of almost 43%. Currently, he possesses an average xG rate of 0.4. 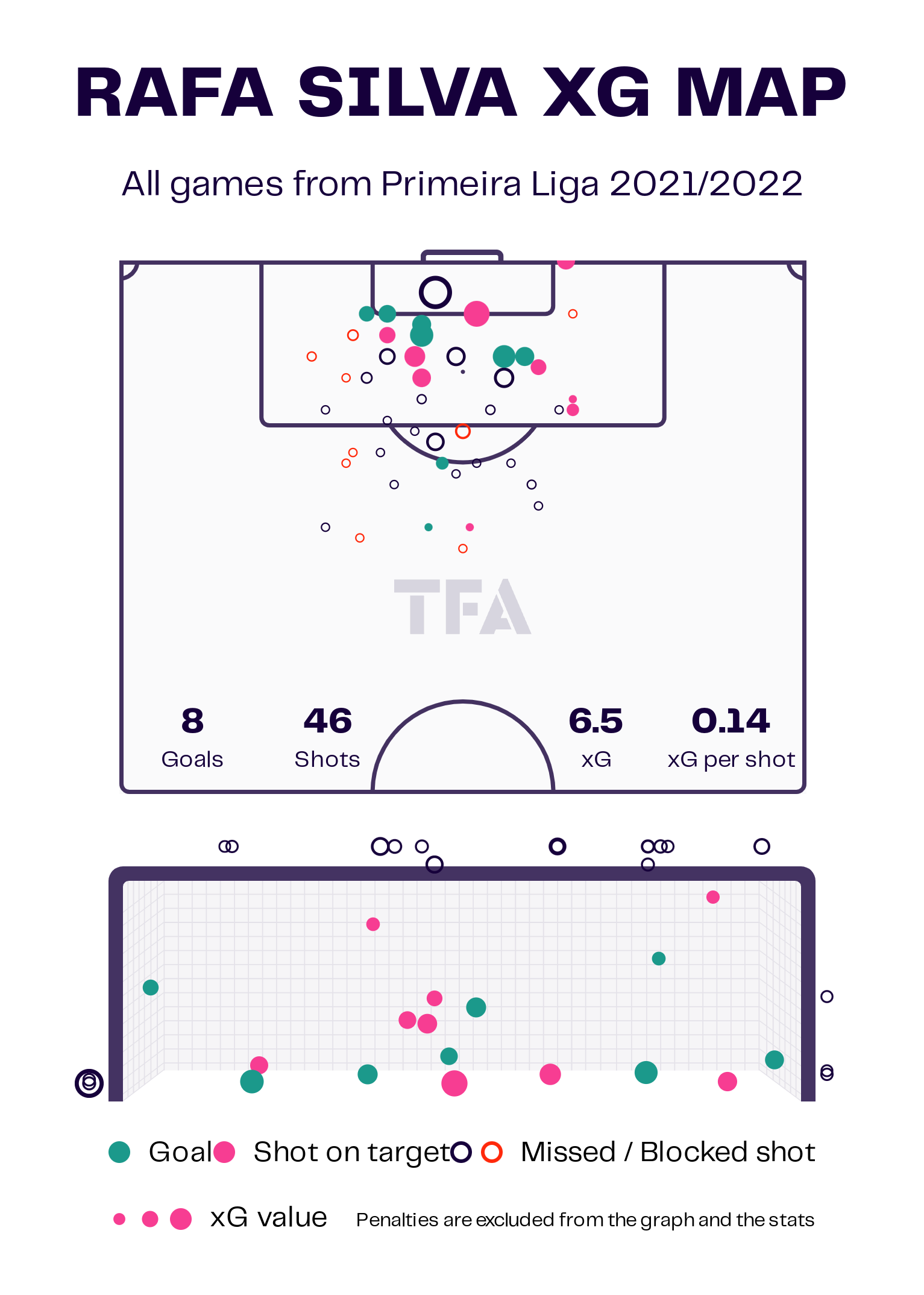 When compared to last season, Rafa Silva scored a total of eight goals. He attempted 46 shots, averaging 1.92 shots per match with an inferior accuracy rate of 37%. He was scoring 0.33 goals per game with an average xG rate of 0.27. His attacking stats have improved this season, as he is already just two goals away from equaling his goal total from the previous season. 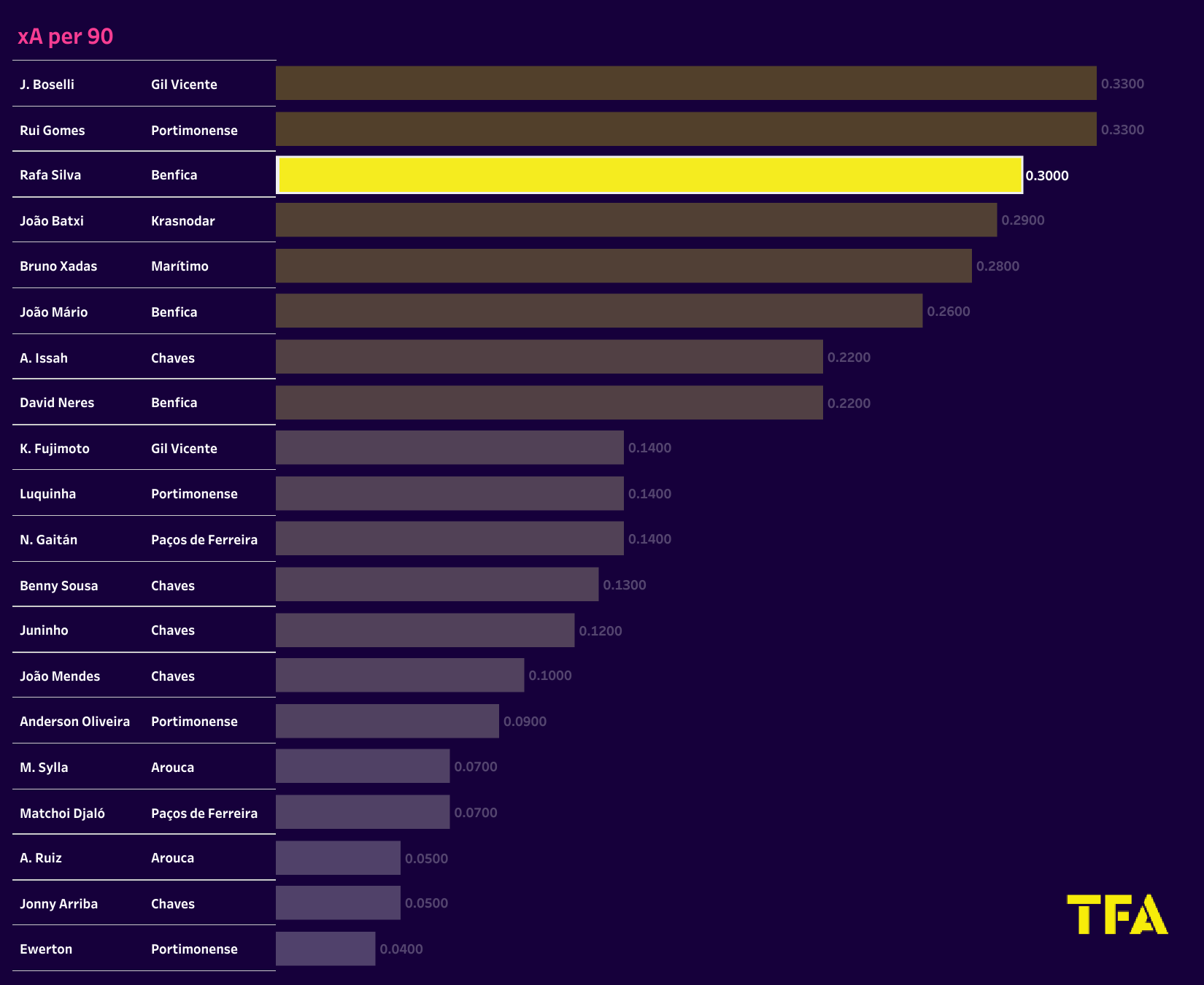 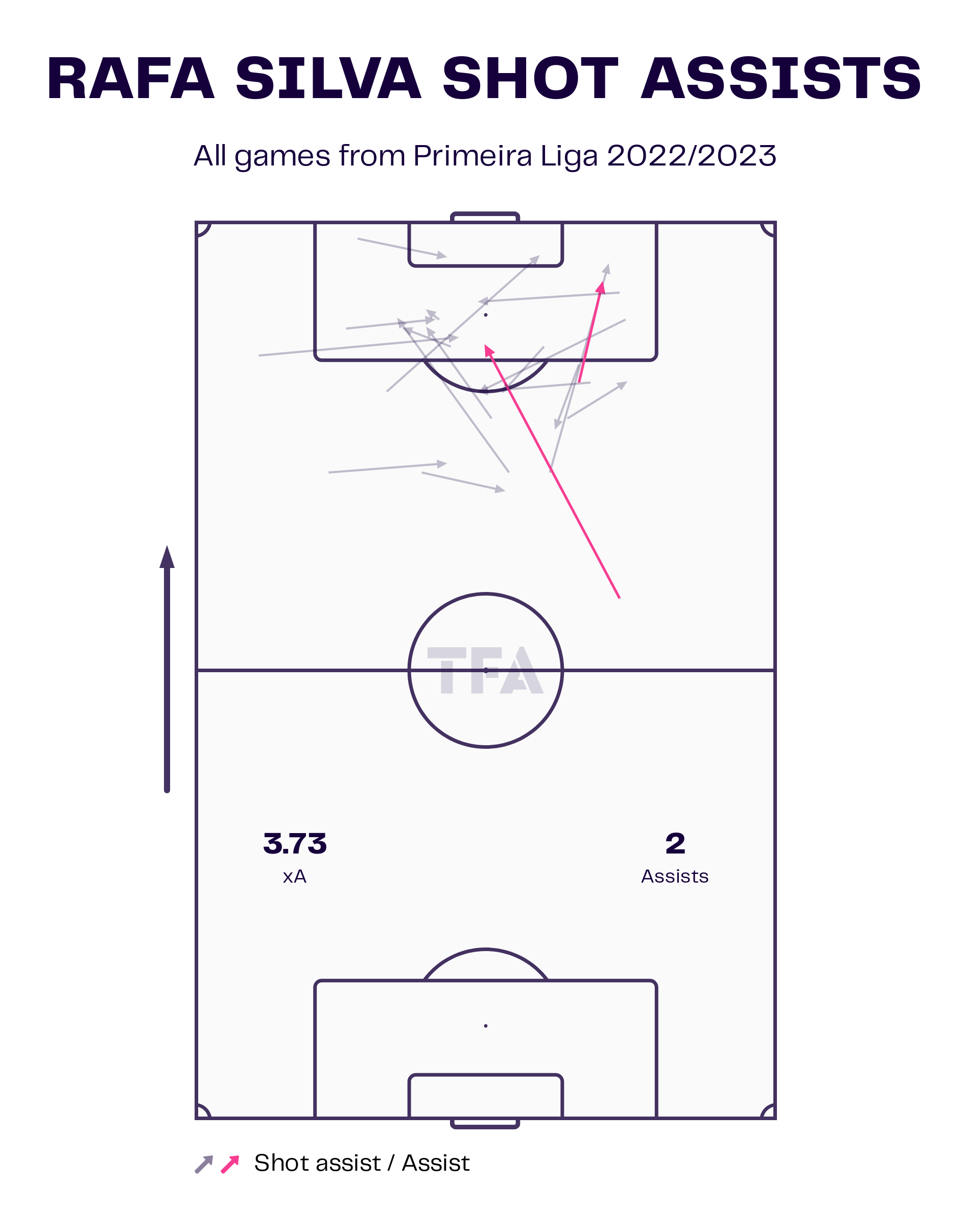 Another crucial aspect of Rafa Silva’s game is his ability to find and set up his teammates. His average xA rate of 0.3 is again one of the highest among similar players. While he has provided two assists so far this season, he was the league’s top assist provider last season with 15 assists. Rafa Silva’s vision and range of passing options enable him to unlock opposition defences. The attacker makes 2.84 passes to the final third and 3.46 passes into the penalty box per match. Thus far this season, he has created five big chances along with 1.6 key passes per 90 minutes. He also receives an average of 26.2 passes from his teammates.

Rafa Silva with the ball 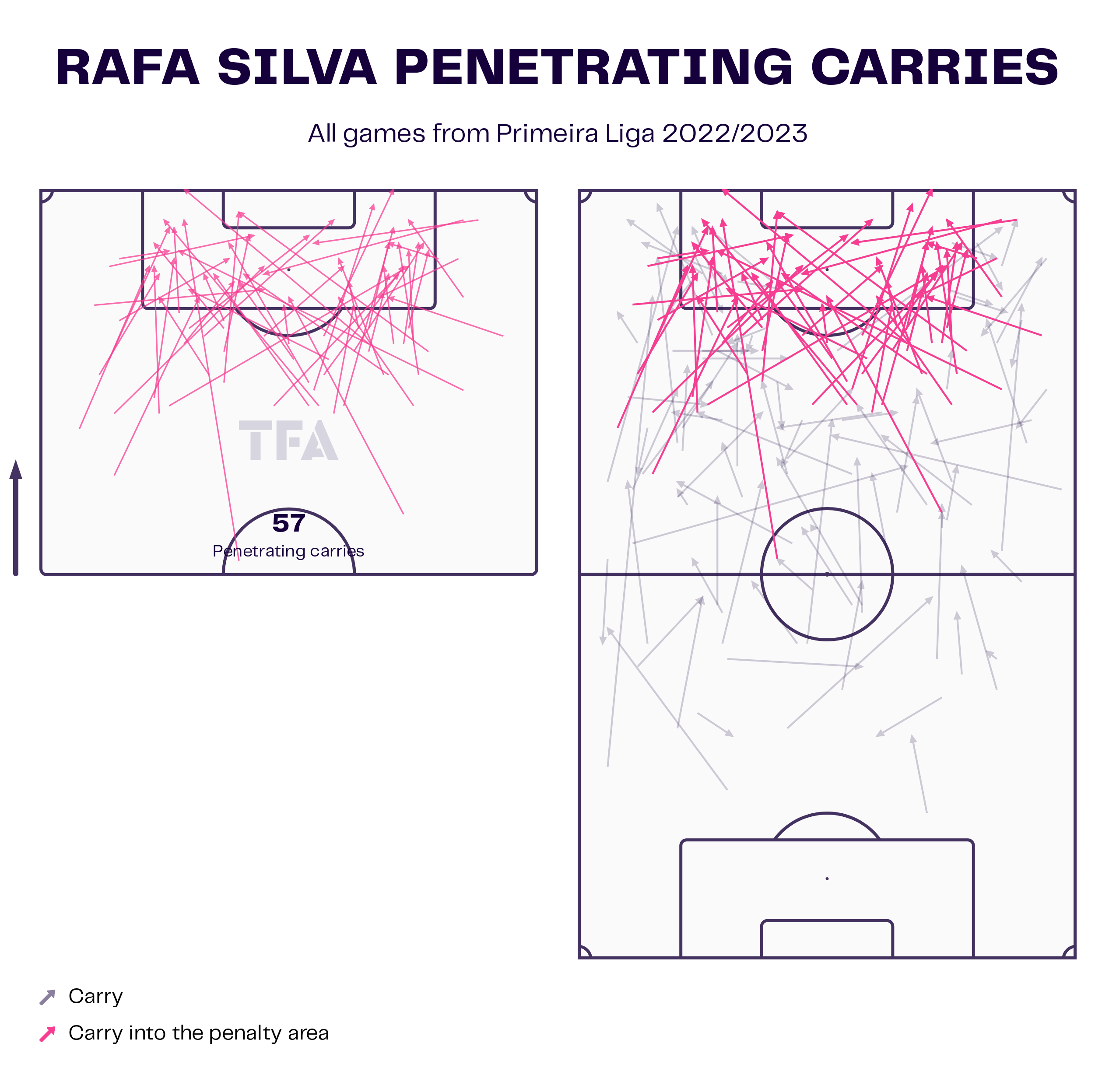 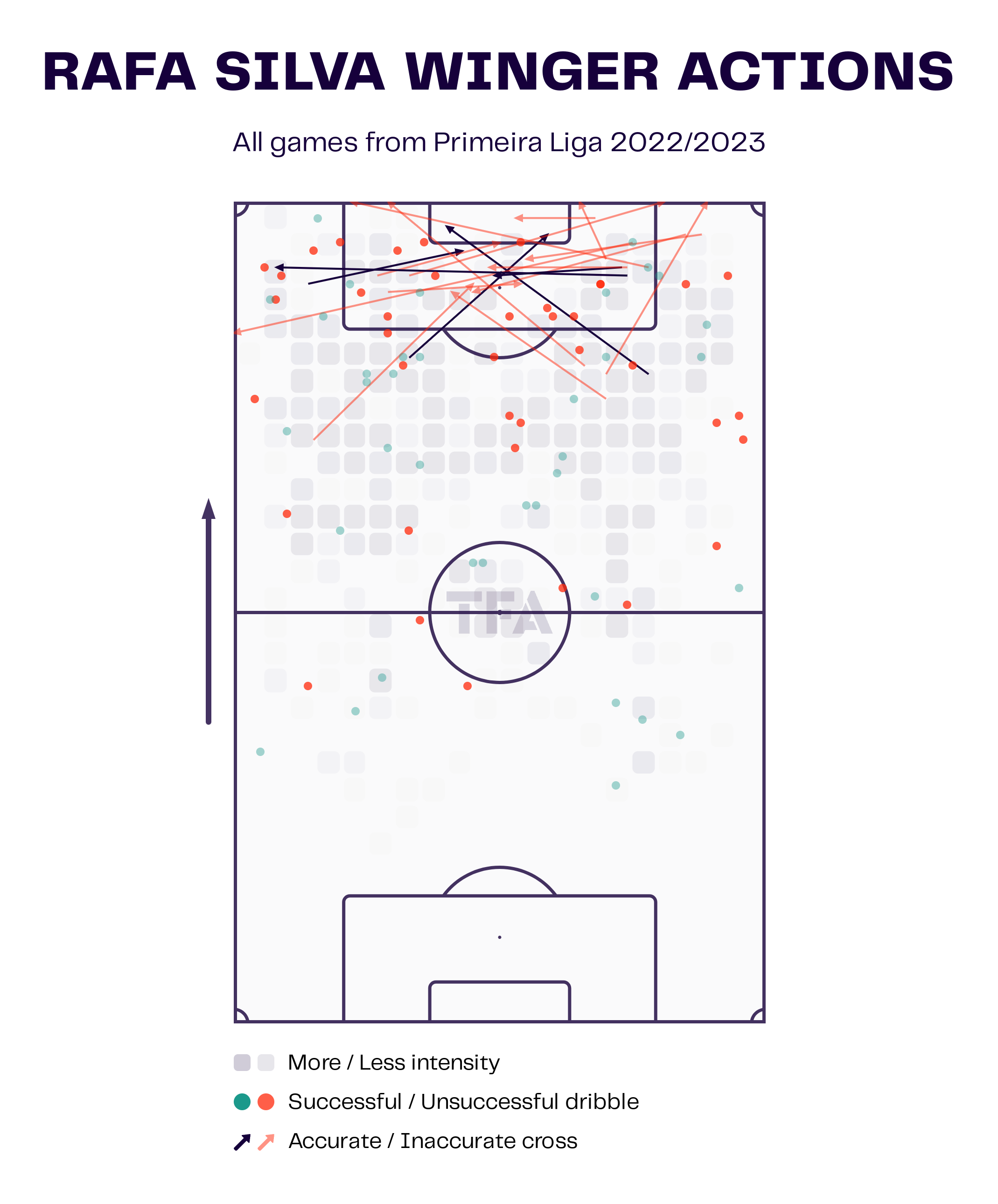 Rafa Silva is a versatile player who knows how to find spaces between the opposition’s lines. He moves around in the final third and often drifts wide to create chances. The two visuals above highlight his creative capabilities with the ball. Silva is proficient at making penetrating carries into the penalty box, with 57 such instances seen this season. The 29-year-old also likes to take on players and put crosses in dangerous areas. Currently, he attempts 5.84 dribbles with 49% accuracy and 1.92 crosses with 20% accuracy on average. Furthermore, Rafa Silva makes three progressive runs along with 5.84 touches in the opposition’s penalty area per game.

Rafa Silva has been one of the key players for the Benfica team over the last few seasons. He is a constant threat to opposing defences with his ability to score goals as well as create chances for others. While he has achieved his goals this season, he will certainly be keen to display his creative side more. Benfica will hope Silva maintains the same levels of consistency throughout the campaign as they chase their first league title in four years.