Sporting CP made the signing of Pedro Porro from Manchester City permanent in the summer transfer window, and it is turning out to be one of the best deals they made this season. The Spanish right-back adjusted well to Liga Portugal during his two-year loan spell starting in 2020. As a result, the 23-year-old has now become an important part of the Lisbon side. His contributions to attack and defence have benefited Sporting in their league campaign. Porro’s ability to overlap, provide the crosses, and track back when required has relieved Ruben Amorim of some tension on the right flank. We look at some stats to understand how impressive he has been for the Lions this season. 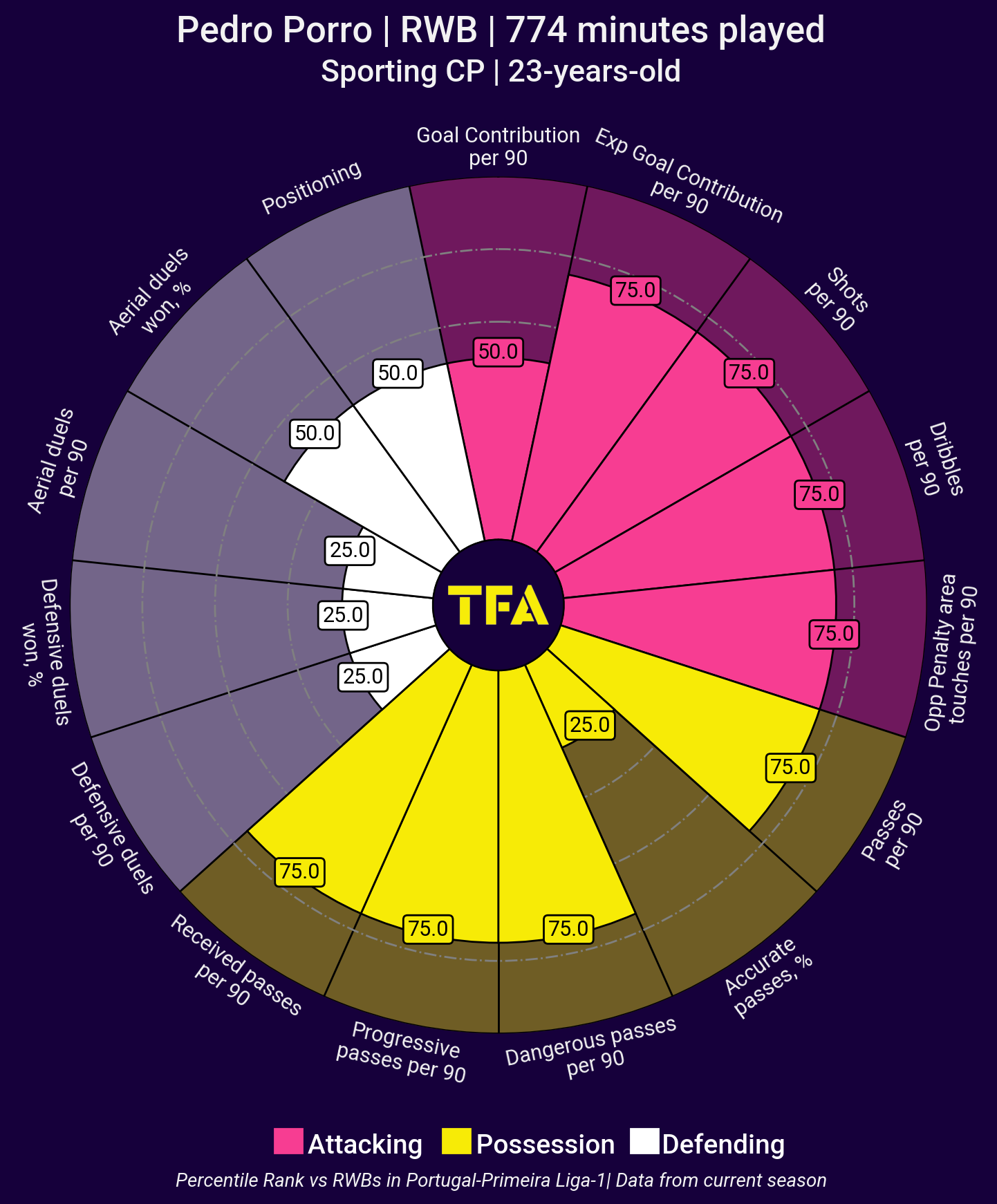 The above visual shows Pedro Porro’s percentile rank compared to other right-wingbacks in Liga Portugal. We can observe that the player has good stats in the attacking and possession departments. He has a high percentile rank for shots, different types of passes, goal contributions, and opposition penalty area touches. He also has an average rank in areas like positioning and winning aerial duels.

Pedro Porro has played ten matches this season with Sporting CP and has four assists to his name. He started eight matches while coming on as a sub in the other two. He overlaps well into the final third, also providing his team with width and an attacking threat. Last season, he contributed with four goals and four assists. The player is already on track to better his assists tally but will be hoping to open his scoring account for this season soon. 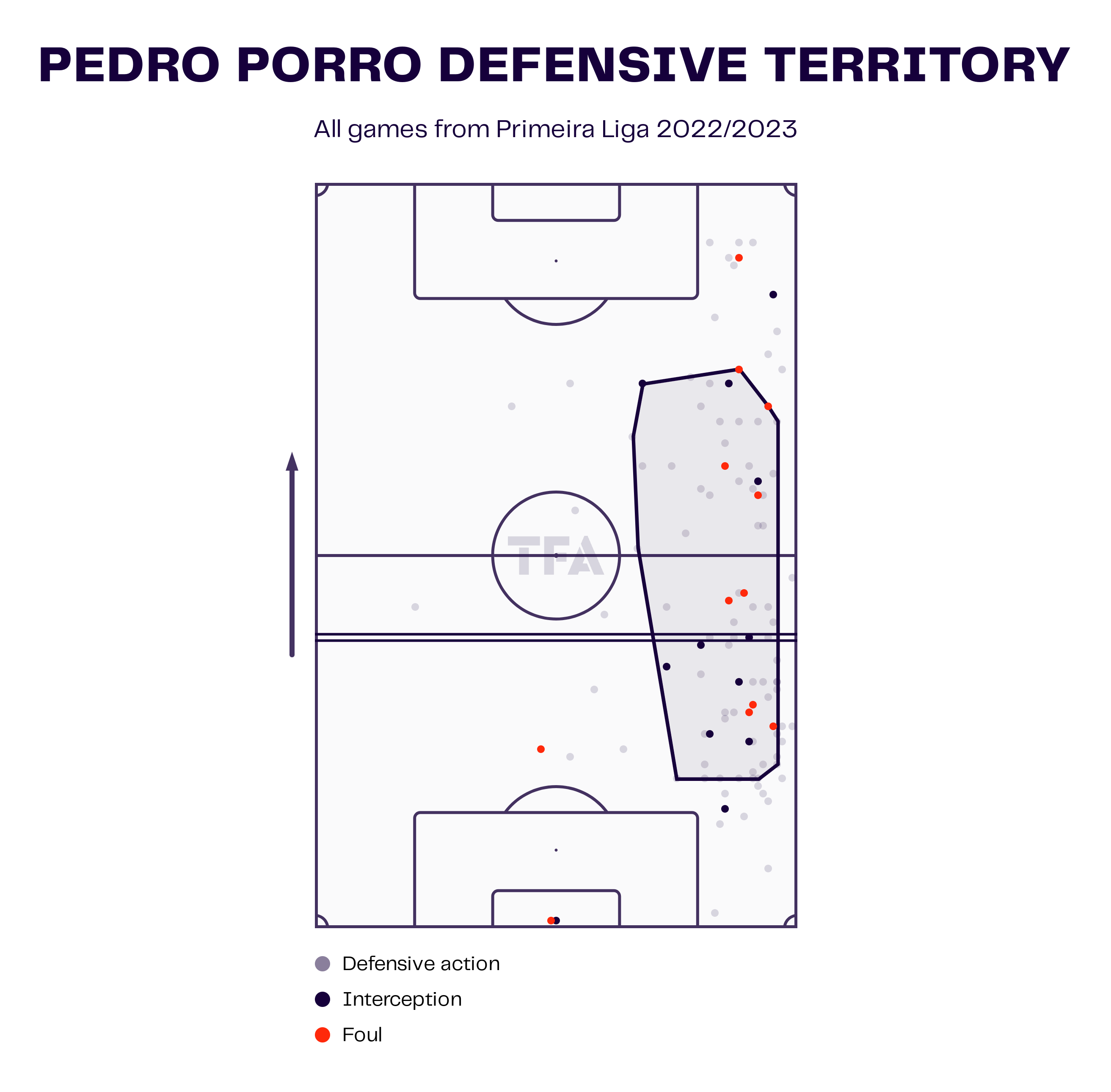 While Pedro Porro’s responsibility is to provide cover for the back three from the right side, he also has the affinity to drift forward in attack. As the above visual suggests, he guards the right flank well and has made an average of eight defensive duels per match this season, winning 50% of them. The wingback has also made an average of 0.9 interceptions and 1.77 tackles per game, contributing to the four clean sheets kept by his team. 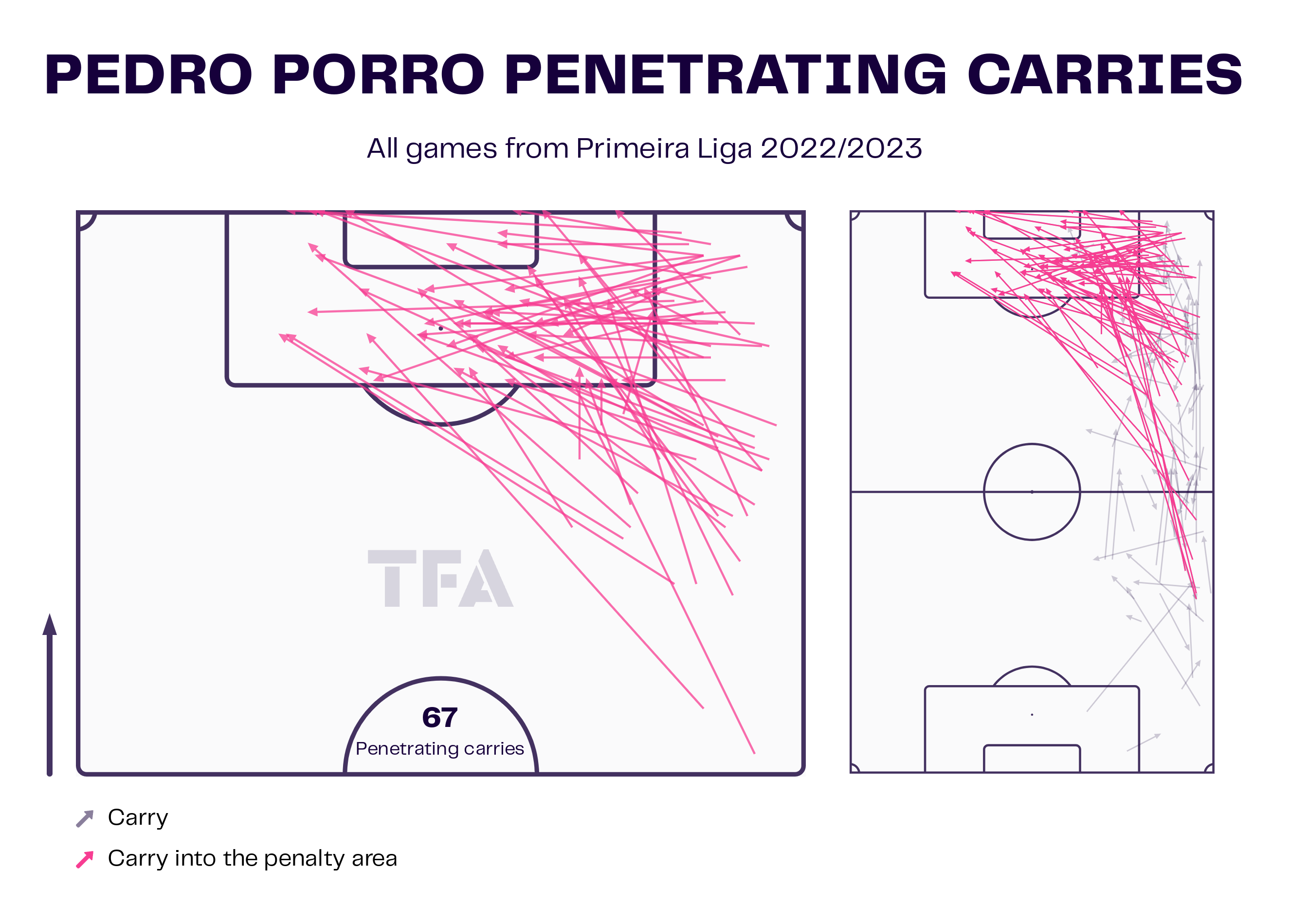 Porro has been crucial on the right flank for Sporting. He receives the ball in the midfield or the defensive half and tends to carry it forward. As shown in the viz above, he has made 67 penetrating carries into the penalty area. Utilizing the spaces on the right flank, he helps his team launch quick attacks with these runs. He has attempted a total of 30 dribbles, completing 11 with a 36.7% success rate. Apart from these dribbles, he also makes an average of 4.05 touches in the opposition’s penalty area per game. 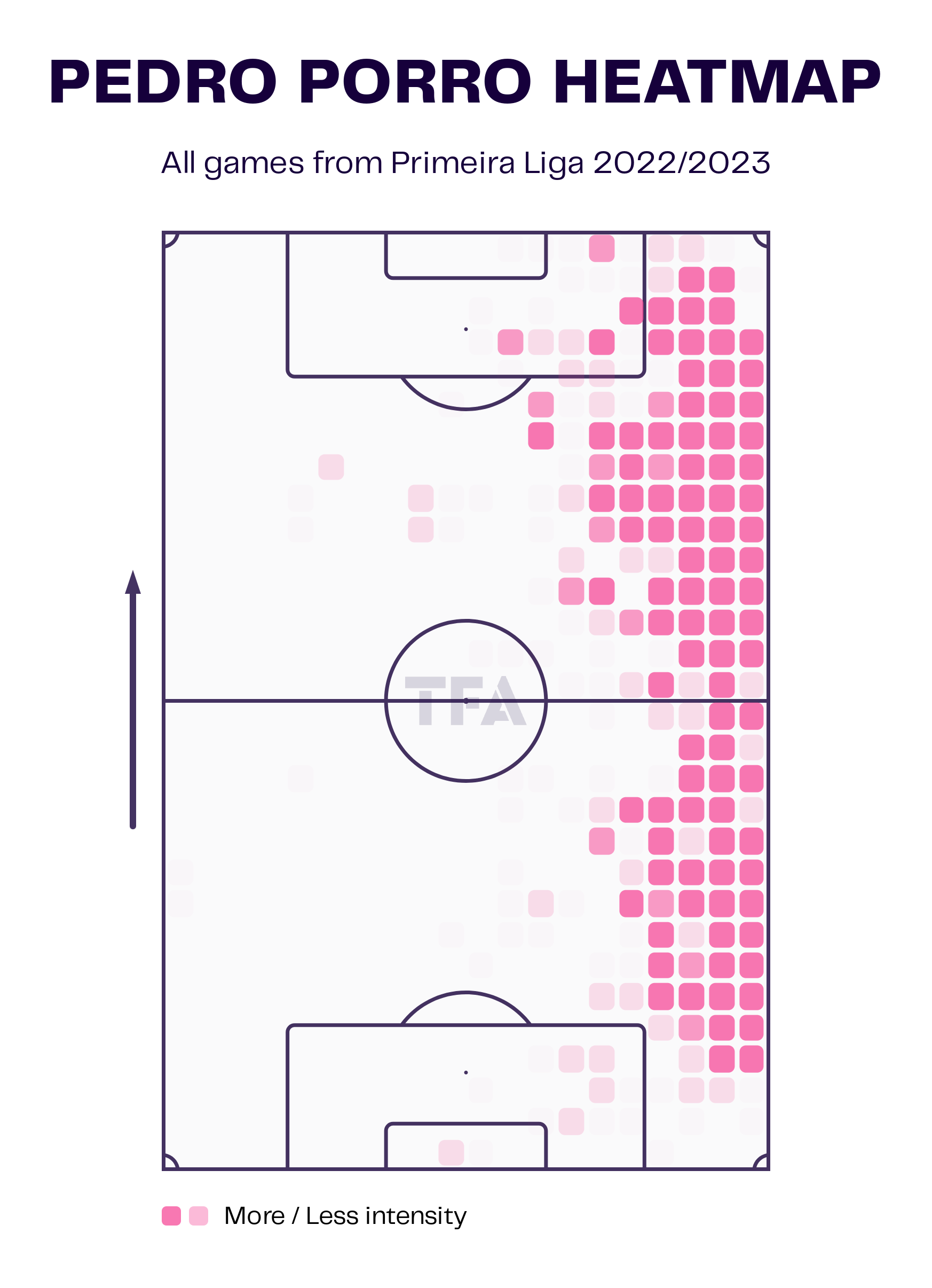 As the heat map indicates, Pedro Porro spends so much time in the attacking half that he effectively plays as a right winger. This forces the opposition’s defenders to mark him, leaving spaces for his teammates to occupy. He has made the most crosses for Sporting (71), with an average of nearly nine crosses per game. Apart from these crosses, Porro also tries to get into the box himself and can pose a problem for the opposition defenders. He has taken 28 shots thus far at an average of 3.54 per match, with 21.4% of them landing on target. These numbers are much higher than last season, when he was taking around two shots per match with similar accuracy. 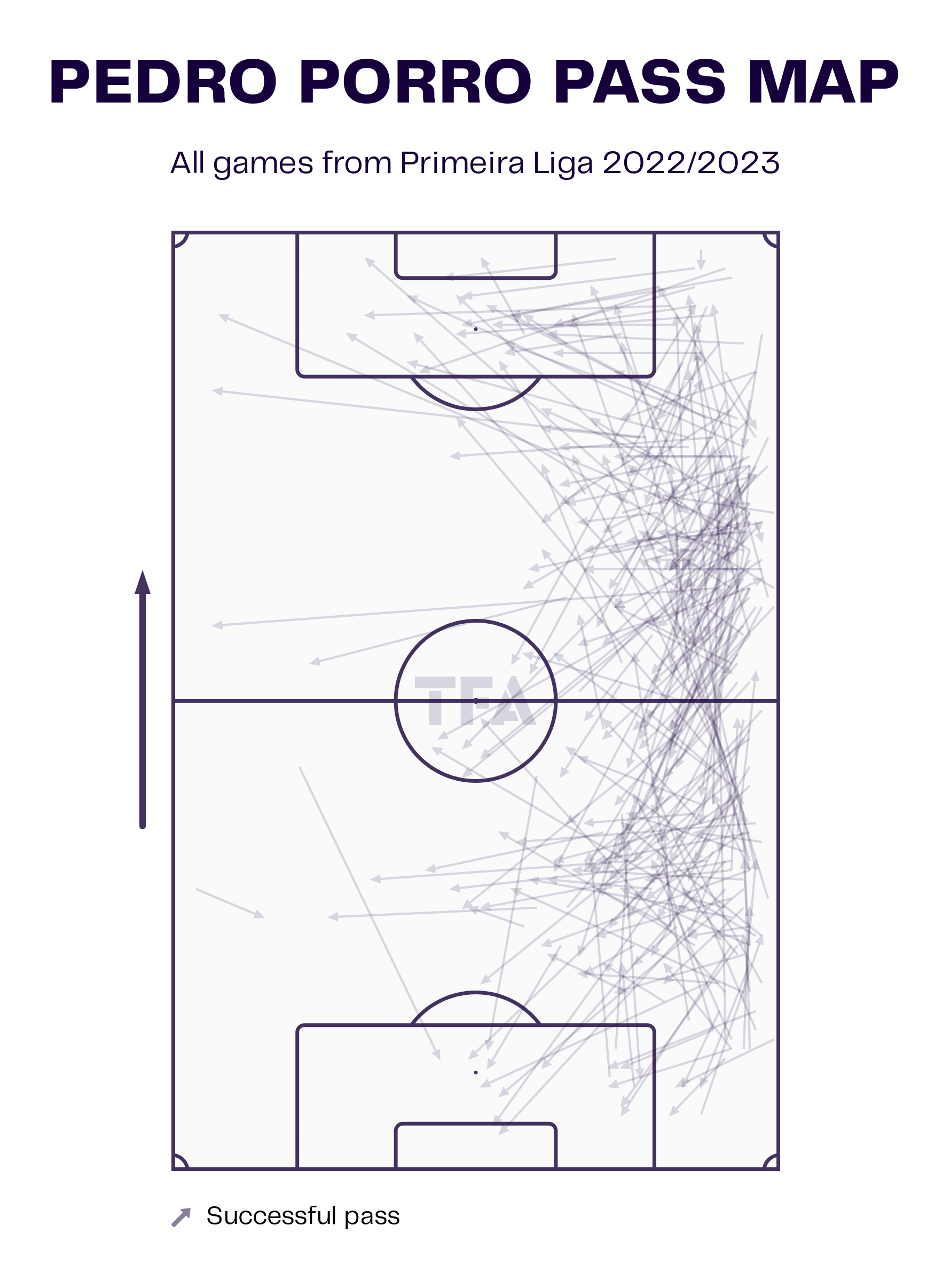 The 23-year-old also has decent passing skills. He averages around 64 passes per match with a completion rate of 71.4%. We can observe from the pass map how he stays wide to receive the ball and progress it inwards. Moreover, he links up well with the midfielders and wide forwards. Pedro provides 2.8 key passes, 4.56 accurate long balls, and 2.53 passes into the penalty area per match on average.

Pedro Porro is enjoying a good campaign with Sporting CP. The club has managed to bounce back from its unimpressive start to the season and will be counting on promising players like him to make this season a successful one.