Just two seasons ago, Pacos de Ferreira played in the UEFA Conference League after finishing fifth in Liga Portugal 2020/21 and thus securing continental participation. However, things have taken a drastic turn since then, as the club finds itself on the brink of relegation this season. They are currently languishing at the bottom of the Liga Portugal 2022–23 standings, having taken only six points from 16 matches played.

Pacos Ferreira are nine points from safety. They have scored only nine goals and conceded 30. Both these figures are two of the worst in Liga Portugal. This season, Pacos de Ferreira’s form is very poor overall, with one win, three draws, and 12 losses. The team’s home form is very poor, with the following results: zero wins, two draws, and six losses. And their away form is similar, as a result of a win and a draw each, and six losses. Let’s now look at some stats that capture Pacos de Ferreira’s Liga Portugal 2022/23 season in terms of their performance in defence. 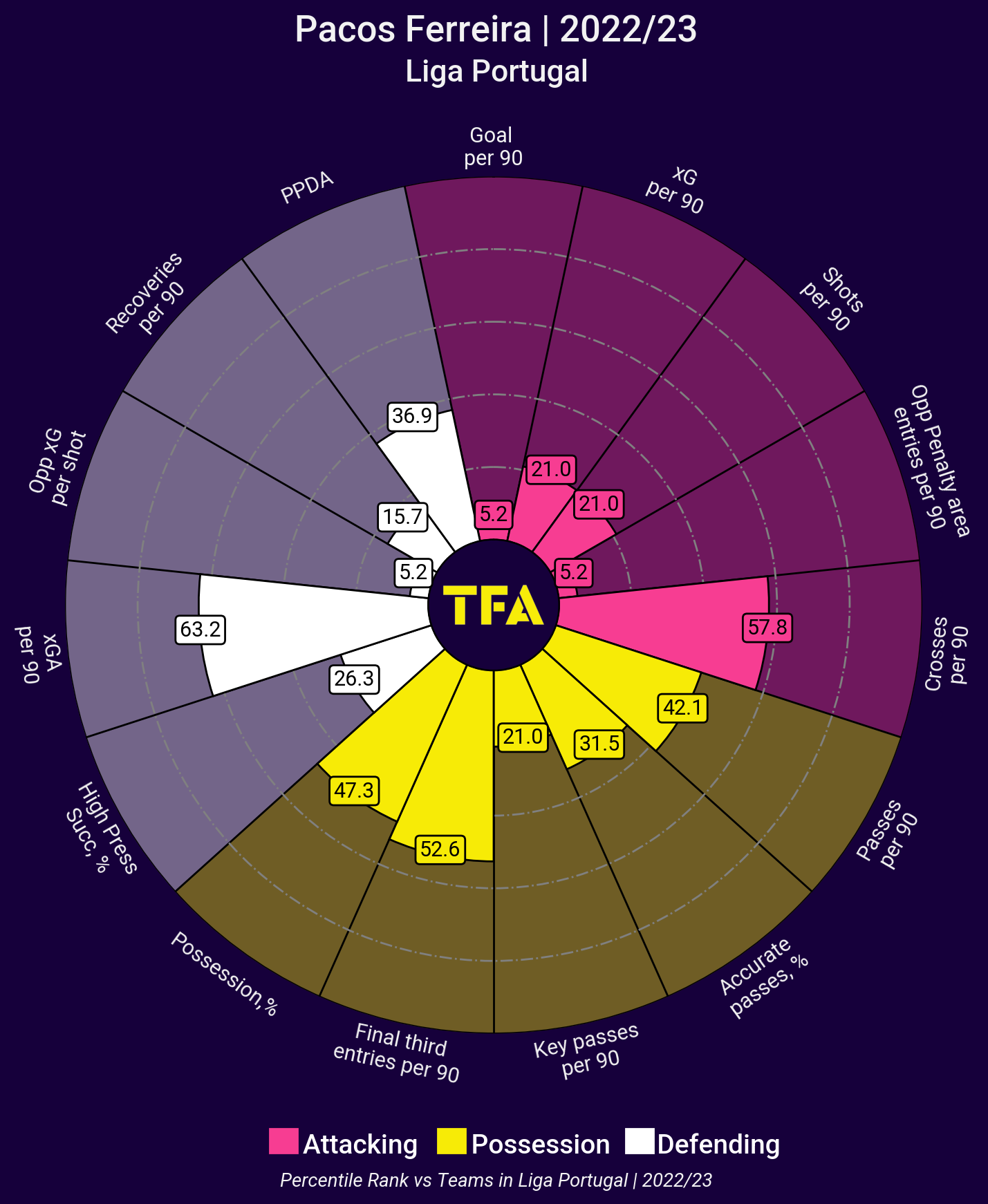 Pacos de Ferreira opened their campaign in horrible form with six consecutive defeats. Their form in the last five matches has shown slight improvement, with one win, one draw, and three losses. The viz above shows the percentile rank of the team’s stats in comparison to other teams in Liga Portugal. It can be observed that the team is struggling in defence. They possess a poor rank with respect to opposition xG per shot, recoveries, and pressing success. Pacos de Ferreira are somewhat decent in terms of possession, performing reasonably in terms of final third entries and possession rate. Meanwhile, the team is also struggling in attack, with a low rank for goals and shots per 90. 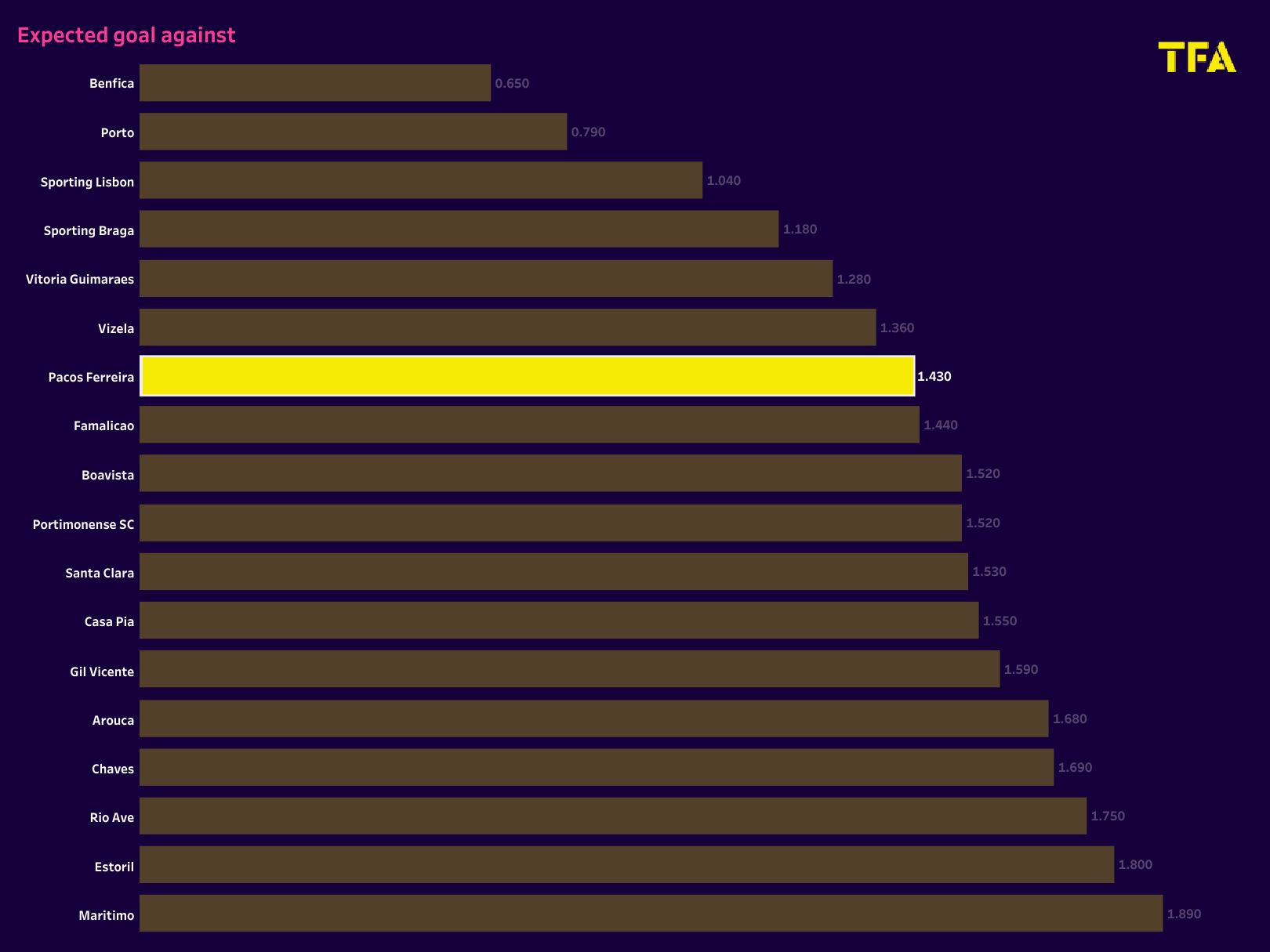 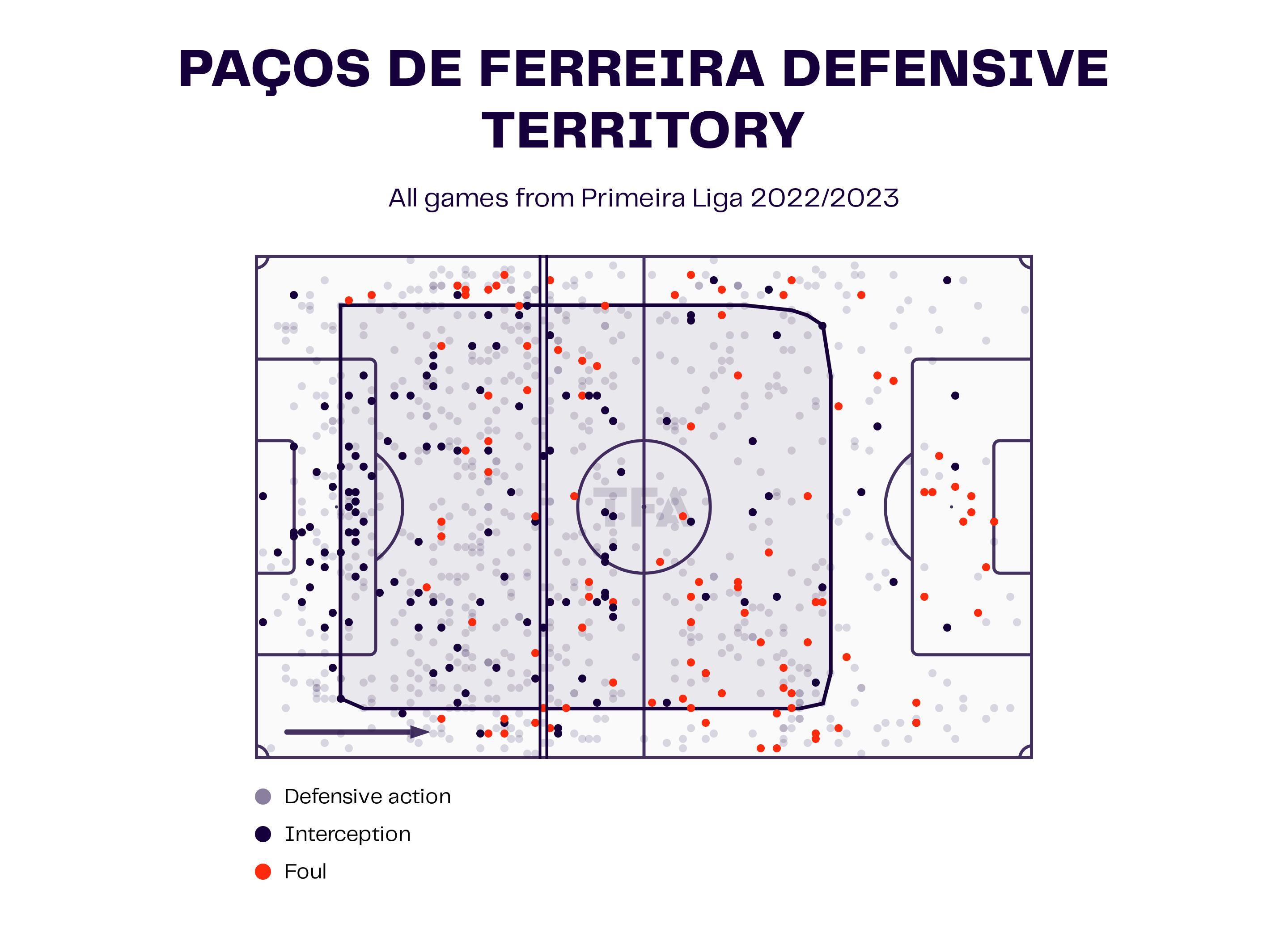 The above viz shows the defensive territory of the team. It indicates that Pacos de Ferreira are involved in a lot of defensive actions in the defensive third, making 44.32 interceptions per match. They have committed numerous fouls in both halves of the pitch, for an average of 10.47 fouls. The team makes 75 recoveries and attempts 198 duels on average, with a win rate of 47.6%. Defensively, they possess numbers that are similar to those of their opponents in the current season, but they still have work to do in the department of goals conceded on average, as they let in 1.88 goals as compared to their opponent’s 0.56 goals conceded per 90 minutes.

Although Pacos de Ferreira’s xGA tally is better than some other teams in the league, they have conceded the second-highest number of goals (30) with a goal difference of -21. Their poor defensive record is one of the reasons why they sit at the bottom of the table. They will need to tighten their defence and not concede goals so easy to have any hope of surviving in the top flight. 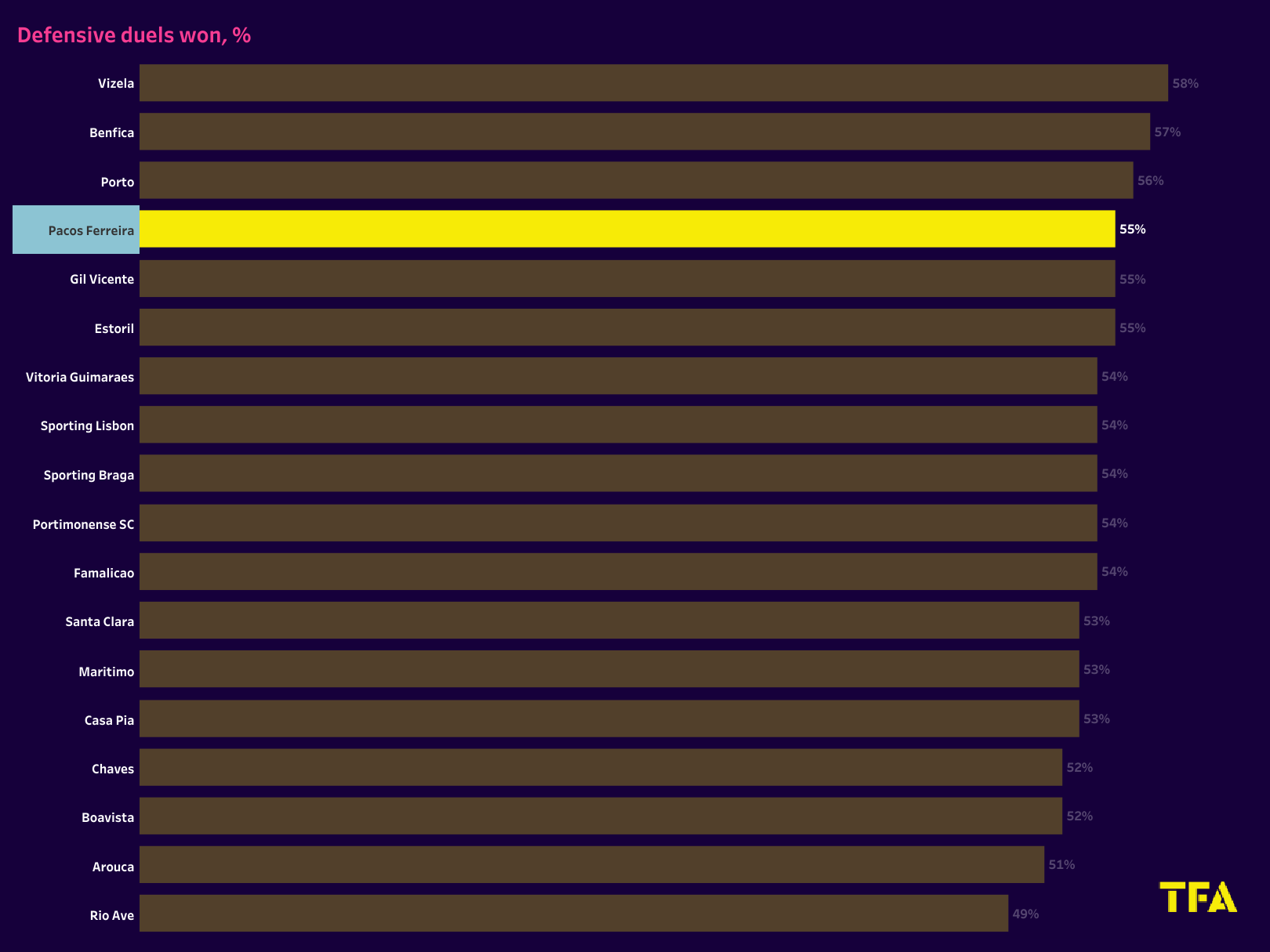 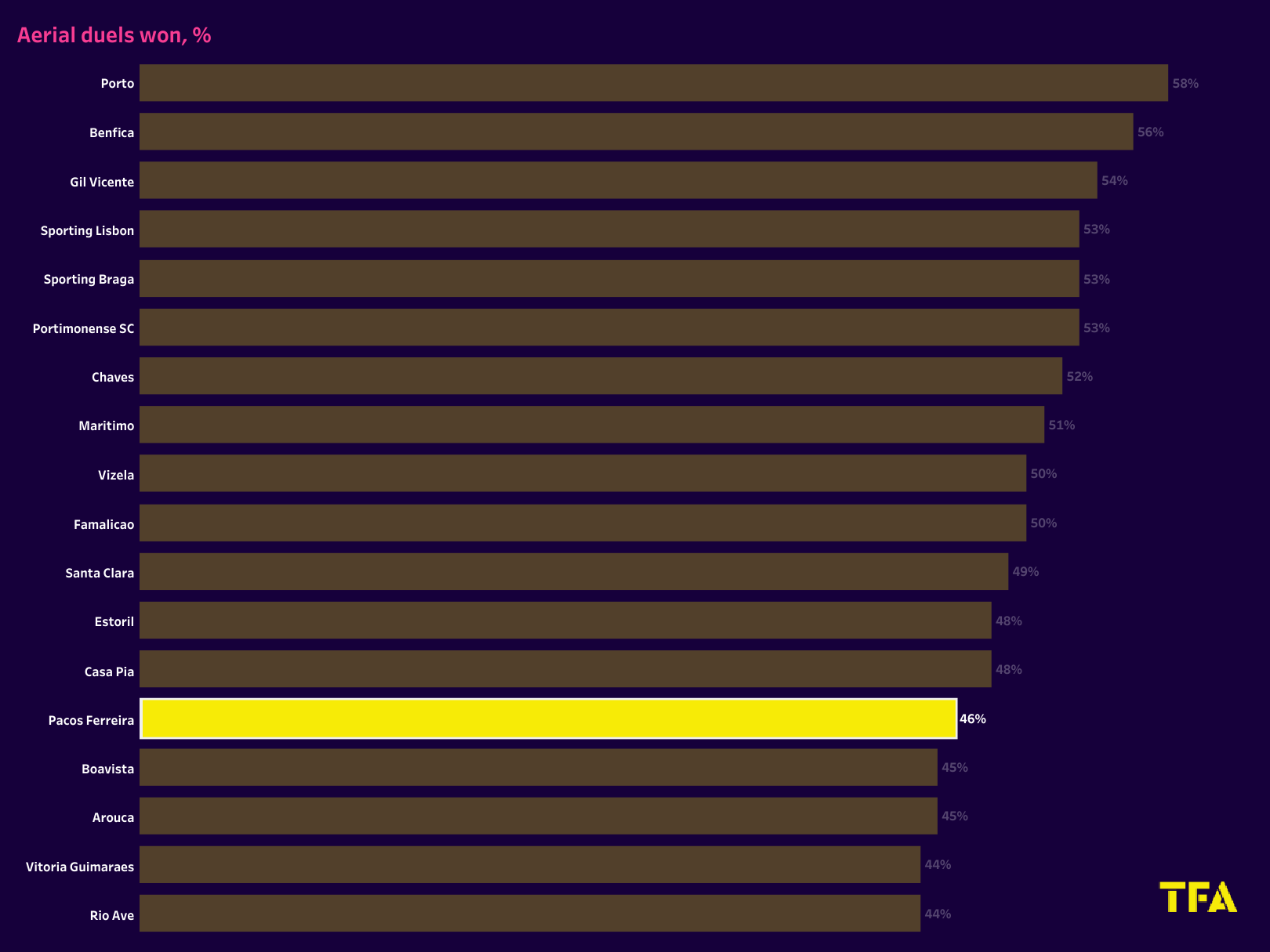 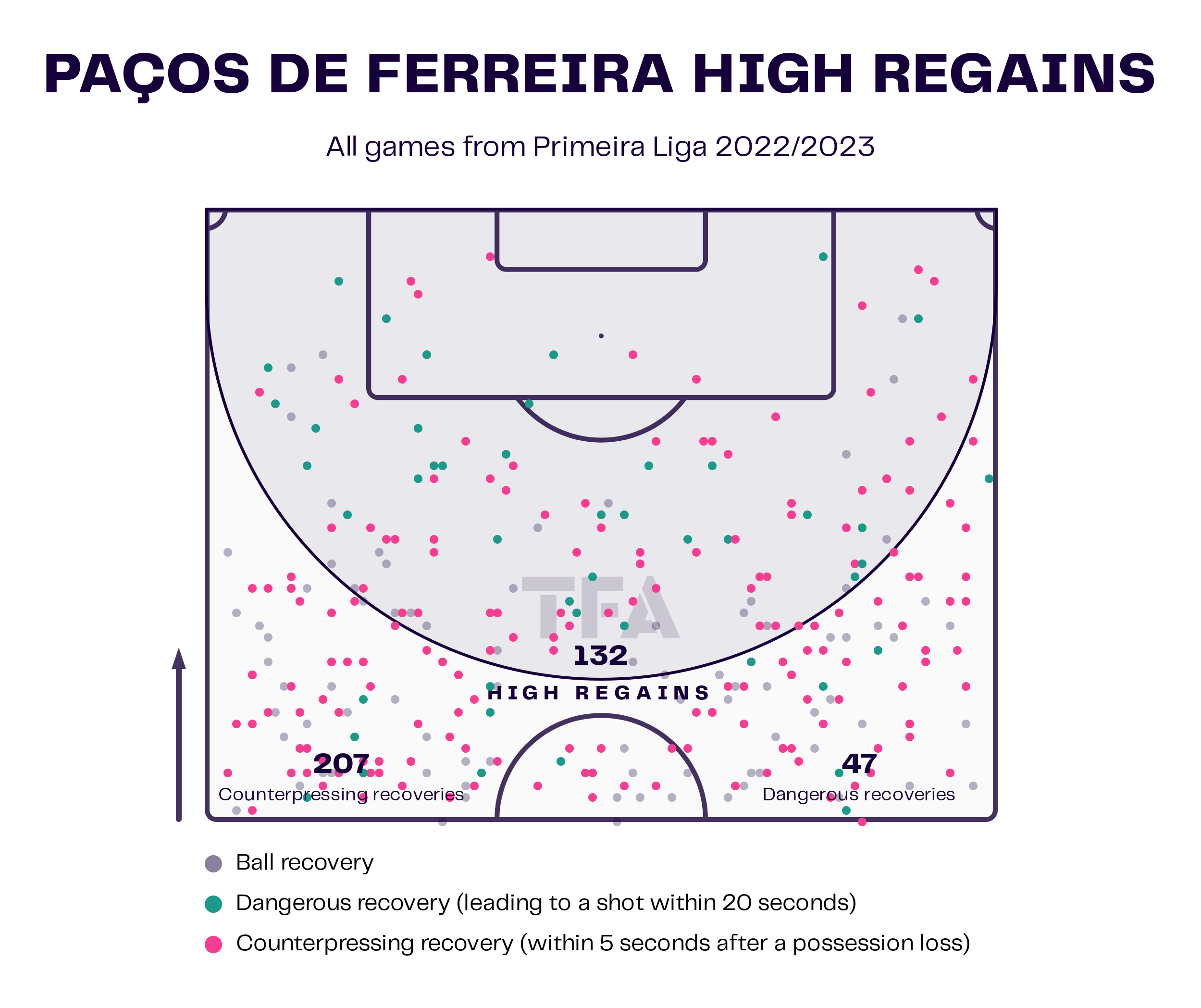 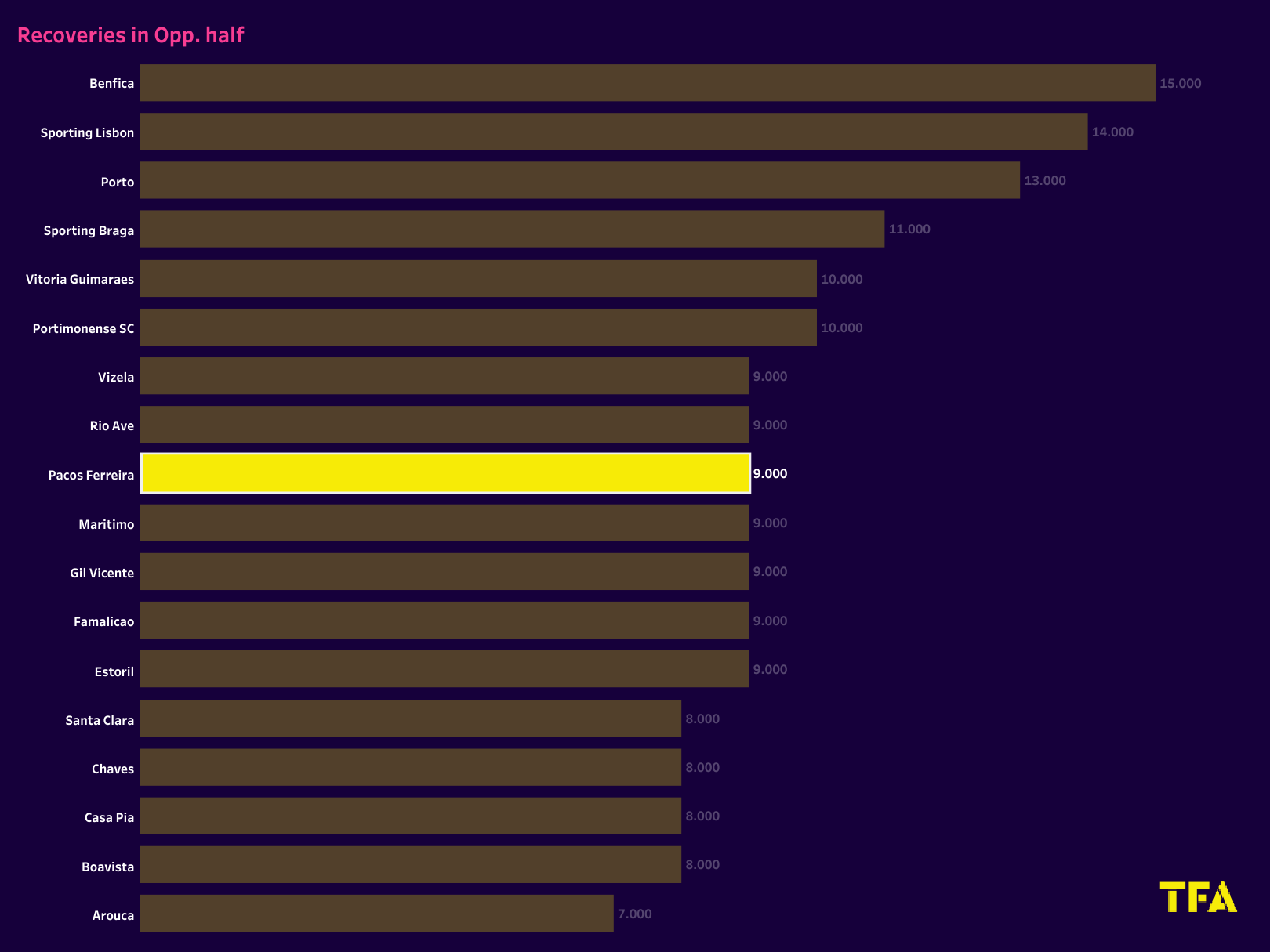 The above viz is a representation of the high regains made by the team in the current season. Pacos de Ferreira have made a total of 207 counter-pressing recoveries within five seconds of losing the ball. They have also made a total of 132 high regains in the final third of the pitch. In addition to that, they have made 47 dangerous recoveries leading to a shot within 20 seconds of getting the ball. Pacos de Ferreira ranks within the 26.3 percentile for high press success rates in the league, which is way below par. They average 74.88 recoveries this season, out of which only 9.0 are made in the opponents’ half per 90, which is among the low figures.

The most recent defensive performance 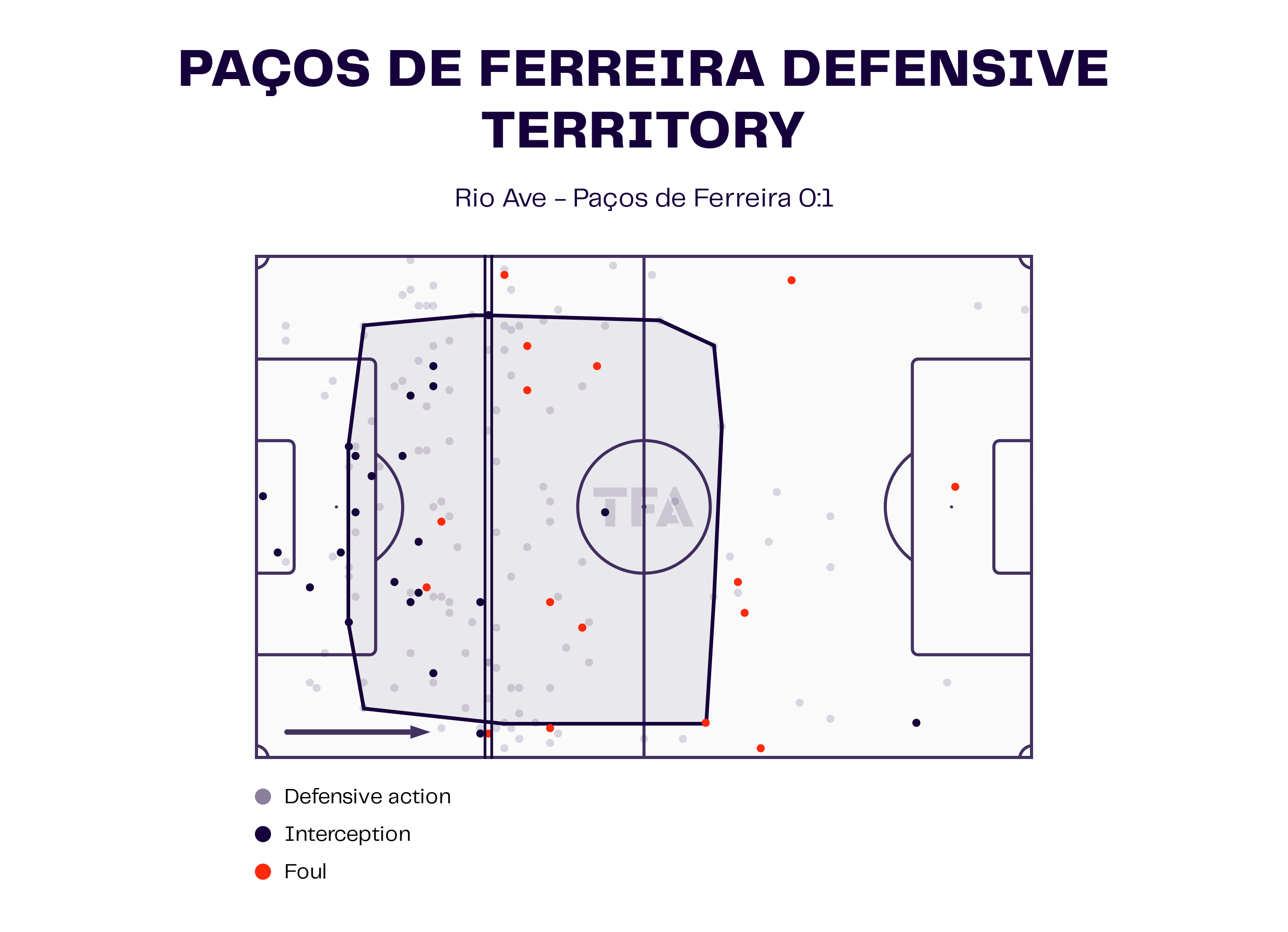 The above viz shows Pacos de Ferreira’s defensive territory from their most recent visit to Rio Ave, in which they won 1-0 and registered their first win of the season. They showed determination in defence by making it tough for their opponents to score. They reduced Rio Ave to only three shots on target and blocked five shots in total. Pacos de Ferreira also made 41 interceptions and 32 clearances, with both figures being much superior to their opponent’s.

Overall, Pacos de Ferreira are having one of their worst Liga Portugal seasons in recent times. They will draw motivation from their last two results (1W, 1D) to shift the momentum and register more positive results on the board. The team will have to work their defensive lapses for a turnaround in fortunes and survival in the top flight.