FC Pacos de Ferreira is a Liga Portugal club that is usually in or near the top half of the table. In recent years, the club has also been known for qualifying for European club competitions such as the UEFA Champions League and UEFA Europa League. In the 2020/21 season, Pacos de Ferreira finished fifth and qualified for the UEFA Conference League. However, things have taken a horrendous turn for them in Liga Portugal 2022/23, as they find themselves on the brink of relegation.

The Pacenses are currently at the bottom of the Liga Portugal table. They have only taken two points from their 13 matches, with 11 losses and two draws, and are yet to win a single game. They lost a key player in Stephen Eustaquio, who moved to FC Porto this summer and have also experienced managerial turmoil amidst this turbulent season. Pacos de Ferreira are already nine points from safety and needs an instantaneous turnaround in fortunes. Let’s look at some stats that capture Pacos de Ferreira’s performance in Liga Portugal 2022/23. 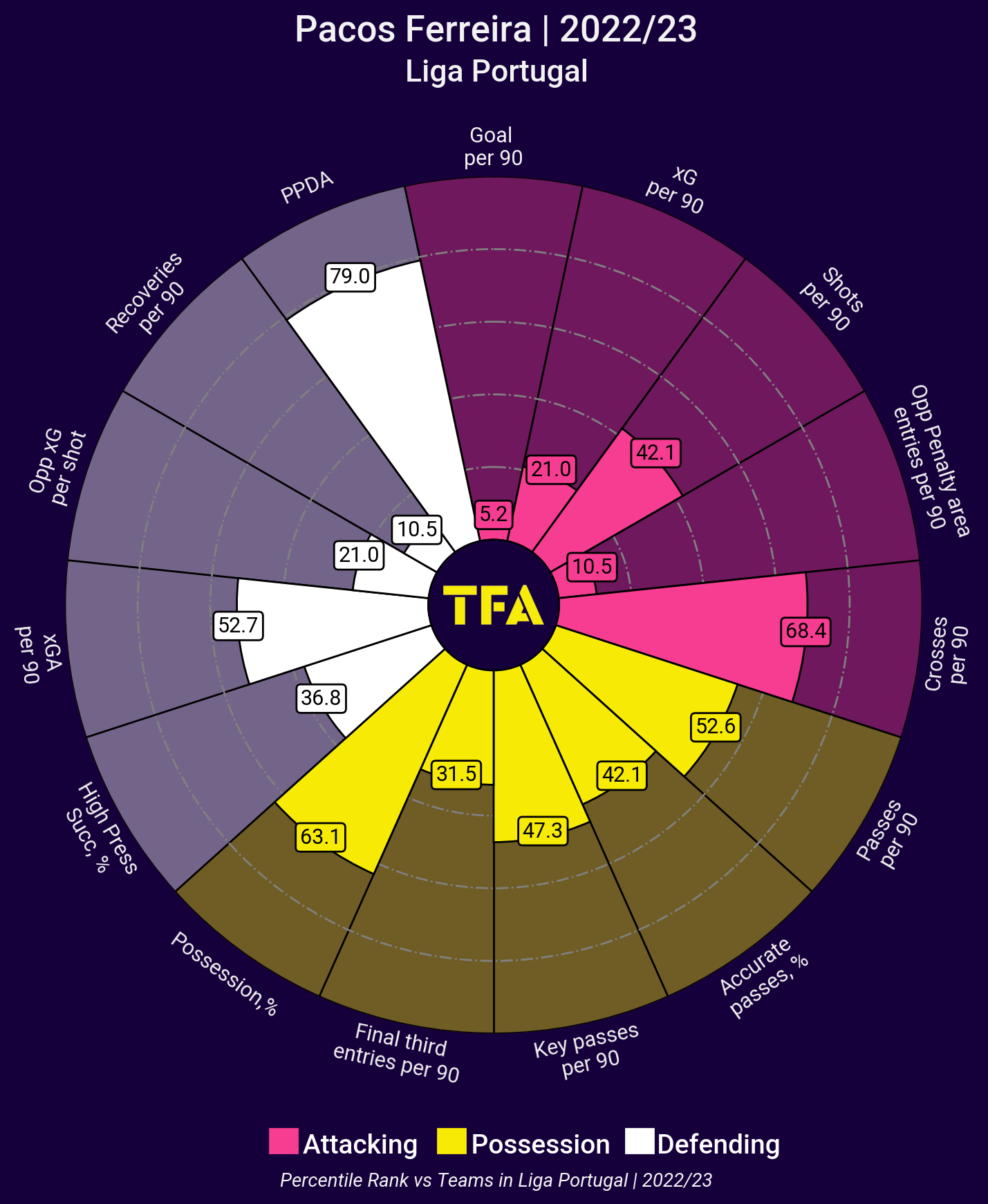 Pacos Ferreira opened the season with six consecutive defeats and have lost their last five matches as well. The viz above shows the percentile rank of the team’s stats in comparison to other teams in the league. It can be observed that the team is struggling massively in attack and defence. They possess a very low rank with respect to scoring goals, opposition penalty area entries, recoveries, and high pressing success rates. While they seem decent in terms of possession, their passing stats are underwhelming. 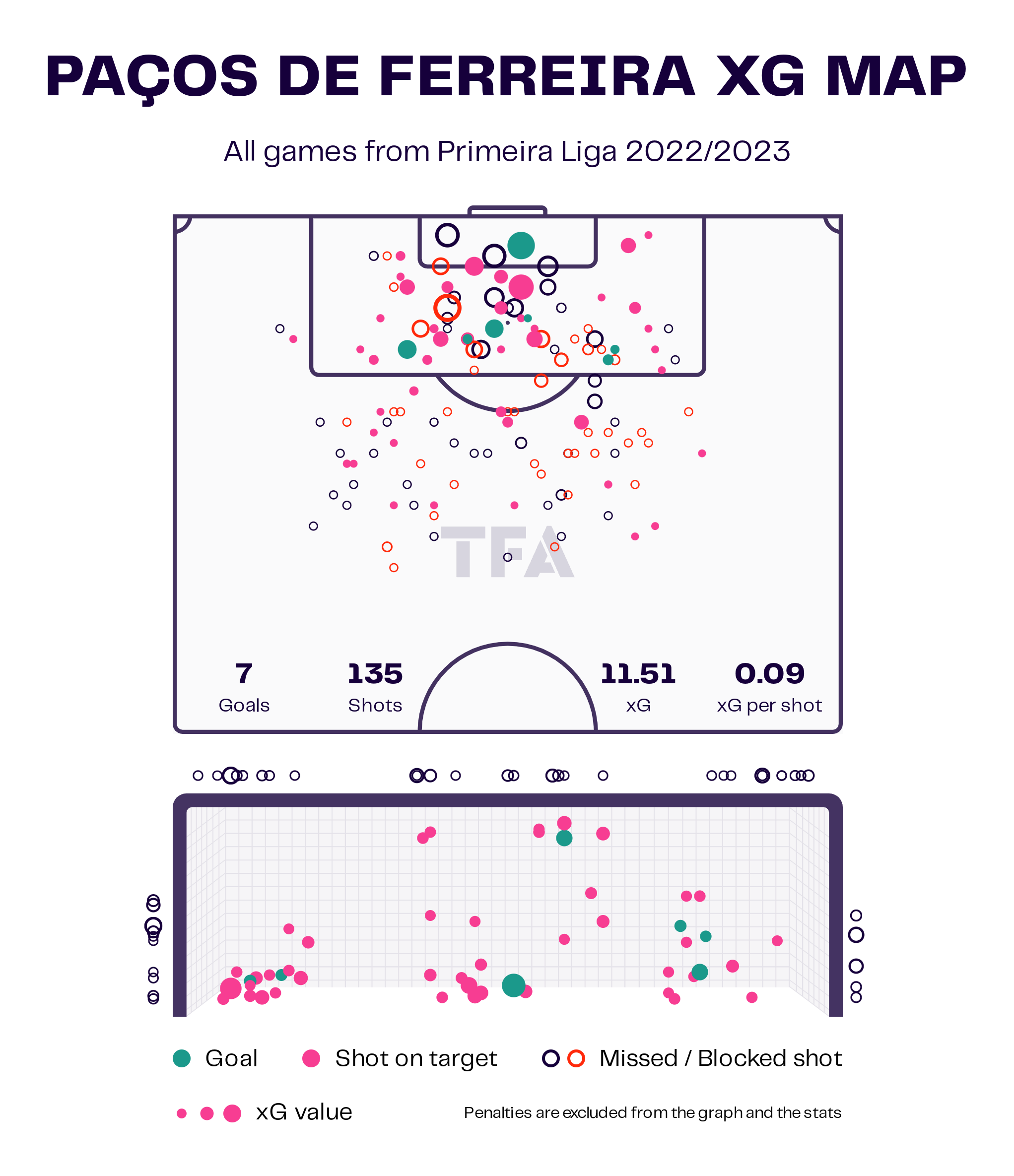 Pacos de Ferreira has the fewest goals (seven) in Liga Portugal 2022/23. The team is massively underperforming in terms of xG too. They have an average of 0.67 goals per match, which is much lower than their xG of 1.2 per match. They take 11 shots per match, with 36% of them landing on target. The viz above shows the team’s shot map from this season. We can see that a lot of their shots from the penalty area have missed the target or have been blocked. The numbers reflect their lack of quality in front of the goal and their inability to finish their chances. 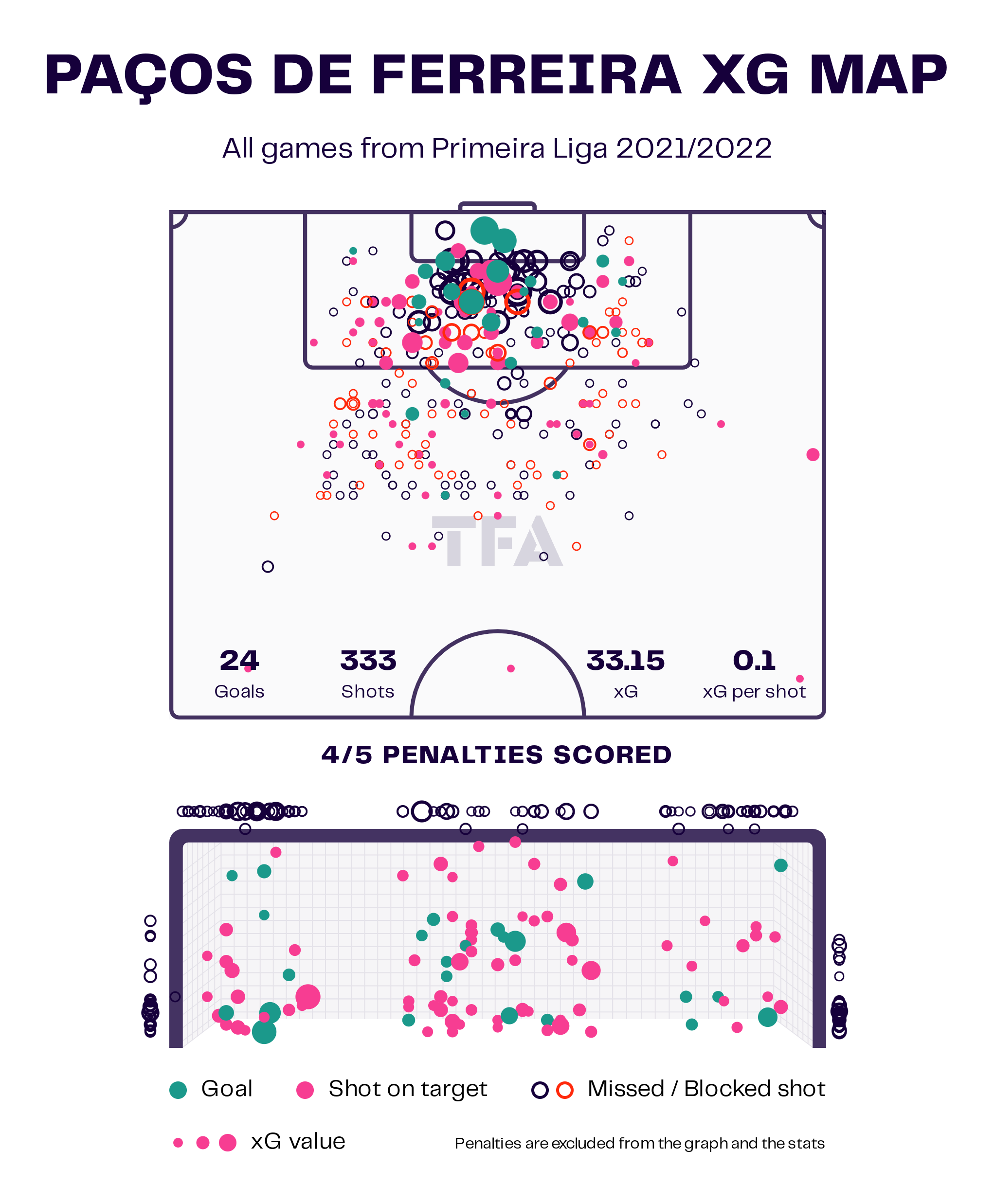 When compared to the 2021/22 season, Pacos de Ferreira scored 29 goals with an xG tally of 33.15. They were scoring at a rate of 0.9 goals per match and taking 10.8 shots per match, with a lesser accuracy rate of 30%. While these weren’t good numbers either, the team’s offensive output has further declined this season. 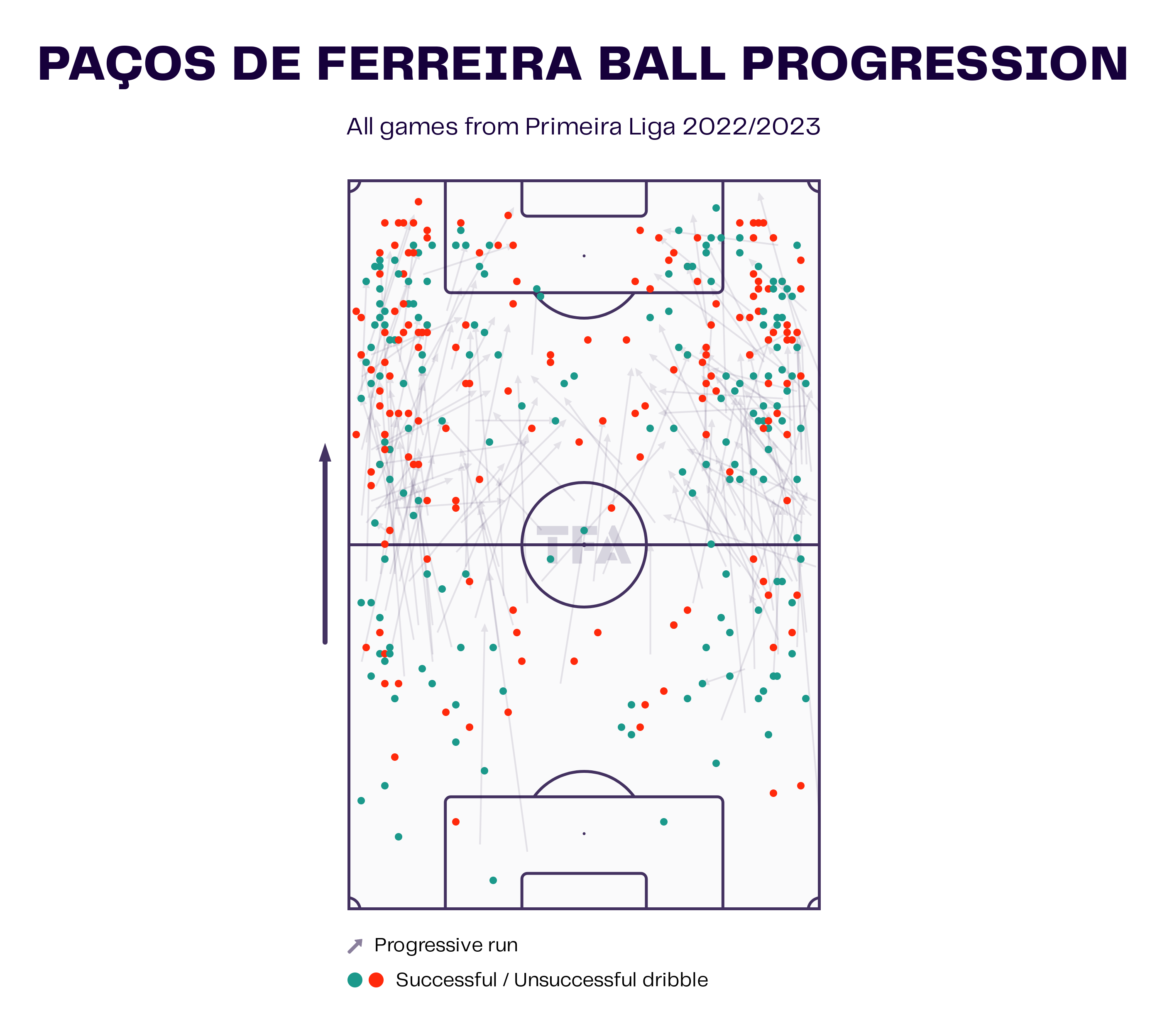 The above viz represents the overall ball progression made by Pacos de Ferreira in Liga Portugal 2022/23 season. There has been a cluster of play on both flanks, and a lot of attempts at dribbles and progressive runs are being made from the wings. This also shows the lack of attacking intent through the centre. Pacos de Ferreira have only made 15 attacks through central zones per match, the lowest in the league. Additionally, they make 36 entries into the final third and 11 entries into the opposition box per match. Again, these numbers are among the lowest in comparison to other teams. 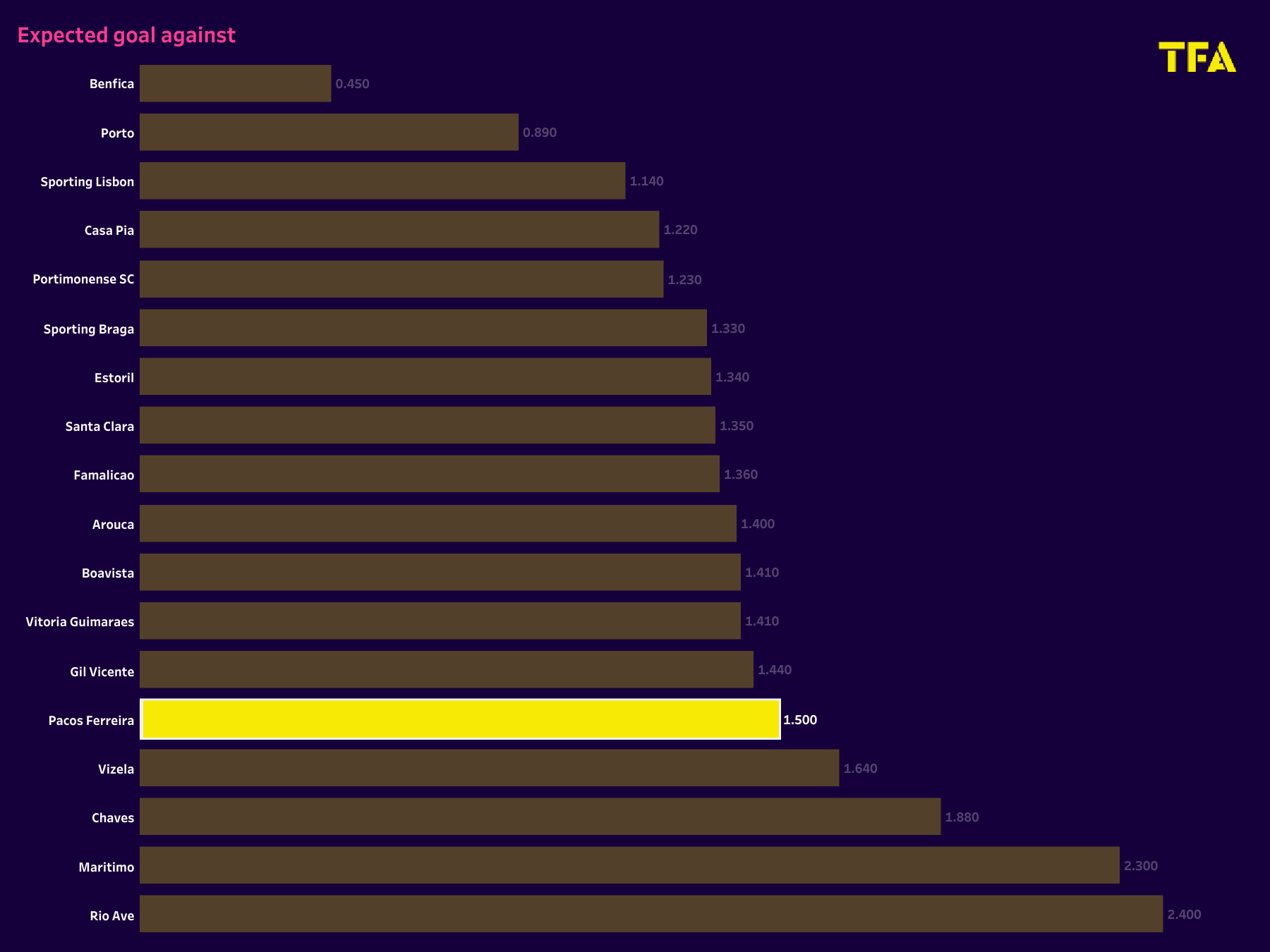 Pacos de Ferreira have a very poor expected goal-against (xGA) tally in the league and have conceded the second-highest number of goals (26) with a goal difference of -19. They tend to concede two goals per match on average. They definitely need to sort their defence out and let in fewer goals to have any hope of staying in the top flight. 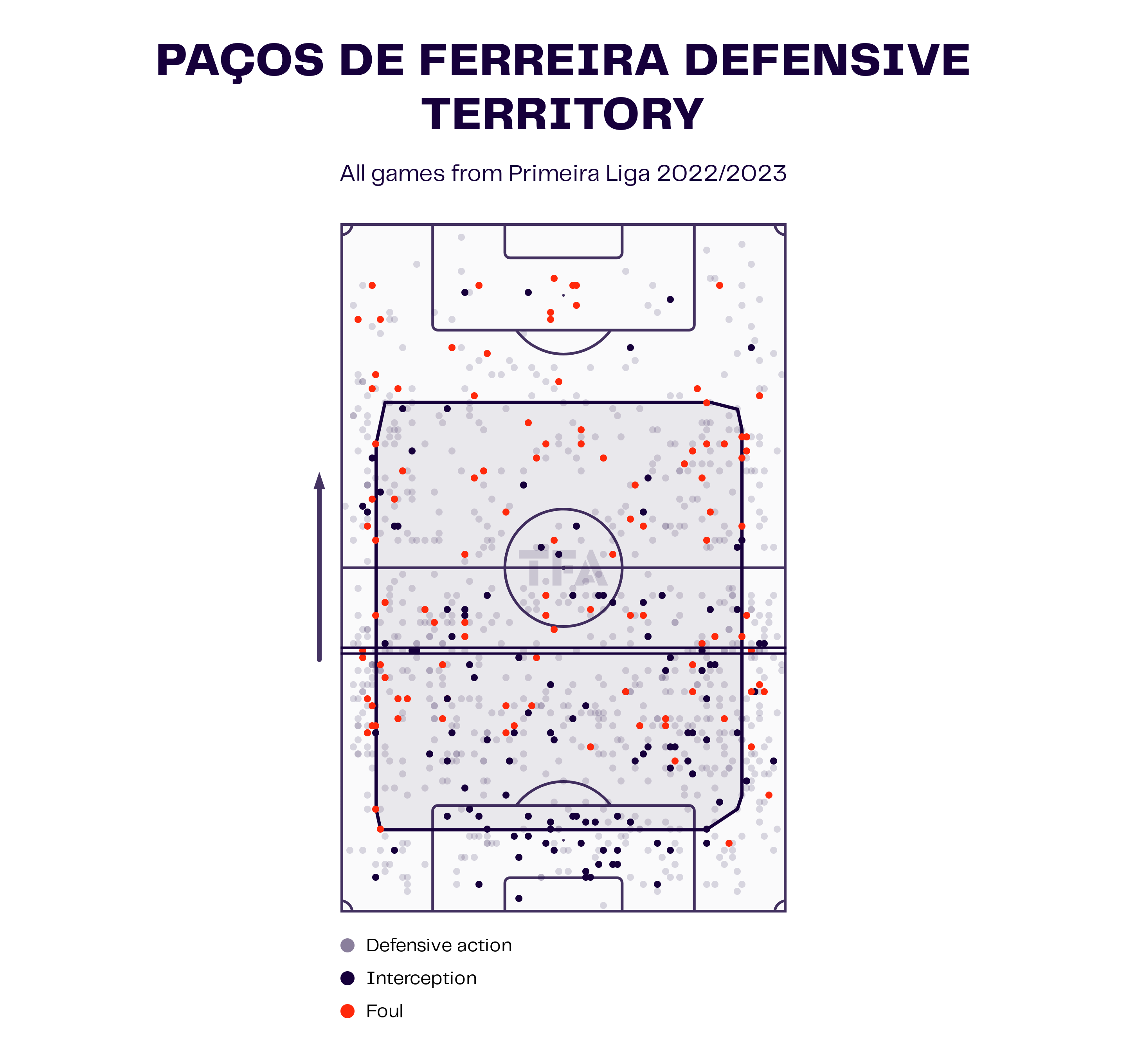 The second viz above illustrates the team’s defensive territory this season. We can see the team making lots of interceptions in their defensive third and even in the penalty box. They make 46 interceptions and eight recoveries in the opposition half per match, which are among the worst in the league. The team wins 58% of their defensive duels, which is almost on par with most of the other teams in the league. Furthermore, they win 52% of their total aerial duels competitions. 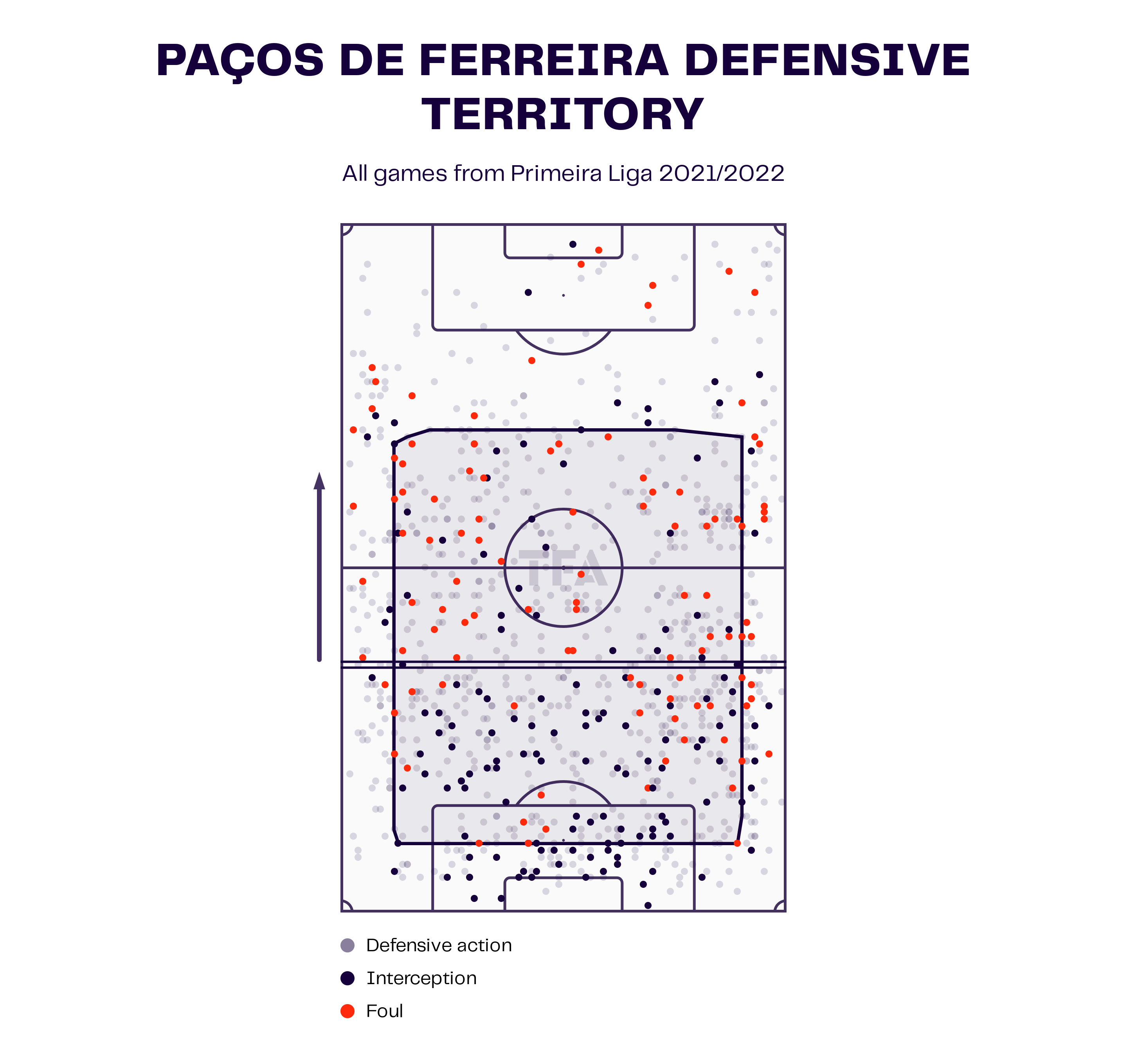 In comparison to the 2021/22 season, Pacos de Ferreira conceded 44 goals throughout their campaign with a goal difference of -15. The team let in 1.3 goals per match on average, which is significantly lower than their figure from this season. While there isn’t much difference in the team’s defensive territory this season, their defensive displays have become far more inconsistent.

The Pacenses have struggled to show any kind of form or momentum in the 2022–23 Liga Portugal season. Their performances have been apathetic both on offence and defence. They will need to find motivation and consistency in their performances if they are to stay in the Portuguese top flight next season.