24-year-old Oday Dabbagh is one of the most recent footballers to hail from the Middle East. The Palestinian international currently plays as a forward in Liga Portugal after signing for FC Arouca in 2021. He made his professional debut at the age of 16 and represented a variety of teams from the Middle East in the following years. He has tasted domestic success with clubs like Hilal Al-Quds and Al-Arabi and has also won individual accolades with these clubs by finishing as the top scorer in the respective leagues.

Oday Dabbagh is Palestine’s all-time leading scorer at the AFC Cup and has featured regularly for the Palestine national football team since 2018. His impressive performances while playing football in the Middle East earned him a move to Liga Portugal, where he became the first Palestinian goalscorer in the history of a European football club with Arouca. Below are some stats that capture Oday Dabbagh’s performances as an Arouca player in Liga Portugal.

How is Oday Dabbagh doing in Portugal?

In the 2021/22 Liga Portugal season, which was his first with Arouca, he made 23 league appearances for Arouca, averaging 30 minutes per game and starting four. He scored four goals in total and provided one assist, with the first two goals coming against the likes of Vitoria SC and Sporting CP. 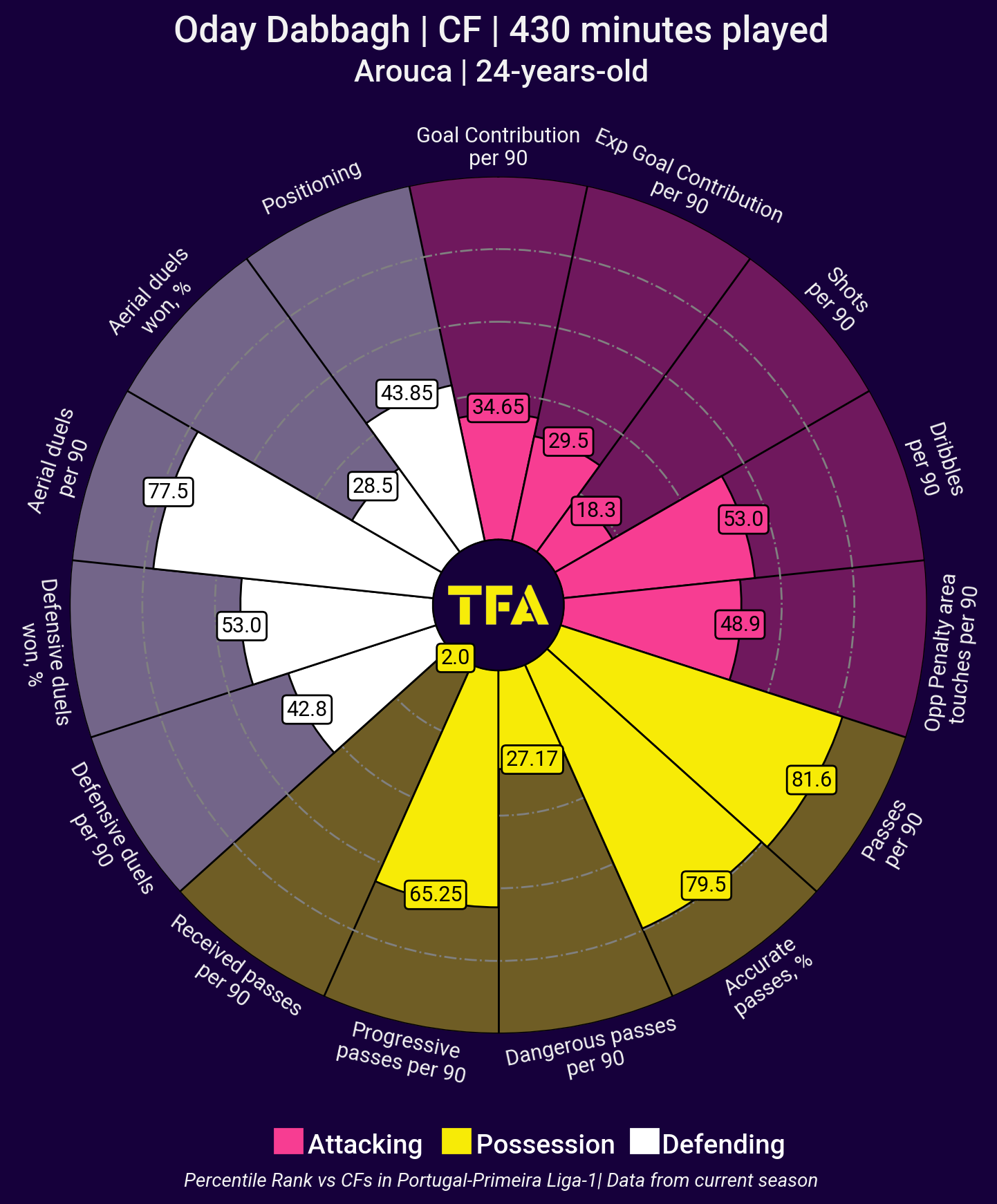 Going into his second season with Arouca, he missed the first seven league matches through injury. Nevertheless, he has played in all eight of the remaining fixtures so far, starting five matches and averaging 61 minutes. He has shown good form this season, having scored four goals already, and has become an important attacking asset for his European team.

The above viz shows the percentile rank of Oday Dabbagh’s stats compared to other centre-forwards in Liga Portugal. While he has shown his goal-scoring proficiency, he contributes further to the team with his ability to find passes, as evidenced by his high percentile rank for passes per 90. Additionally, the Palestinian forward possesses good stats in the following areas: aerial duels, accurate passes, progressive passes, and dribbles. 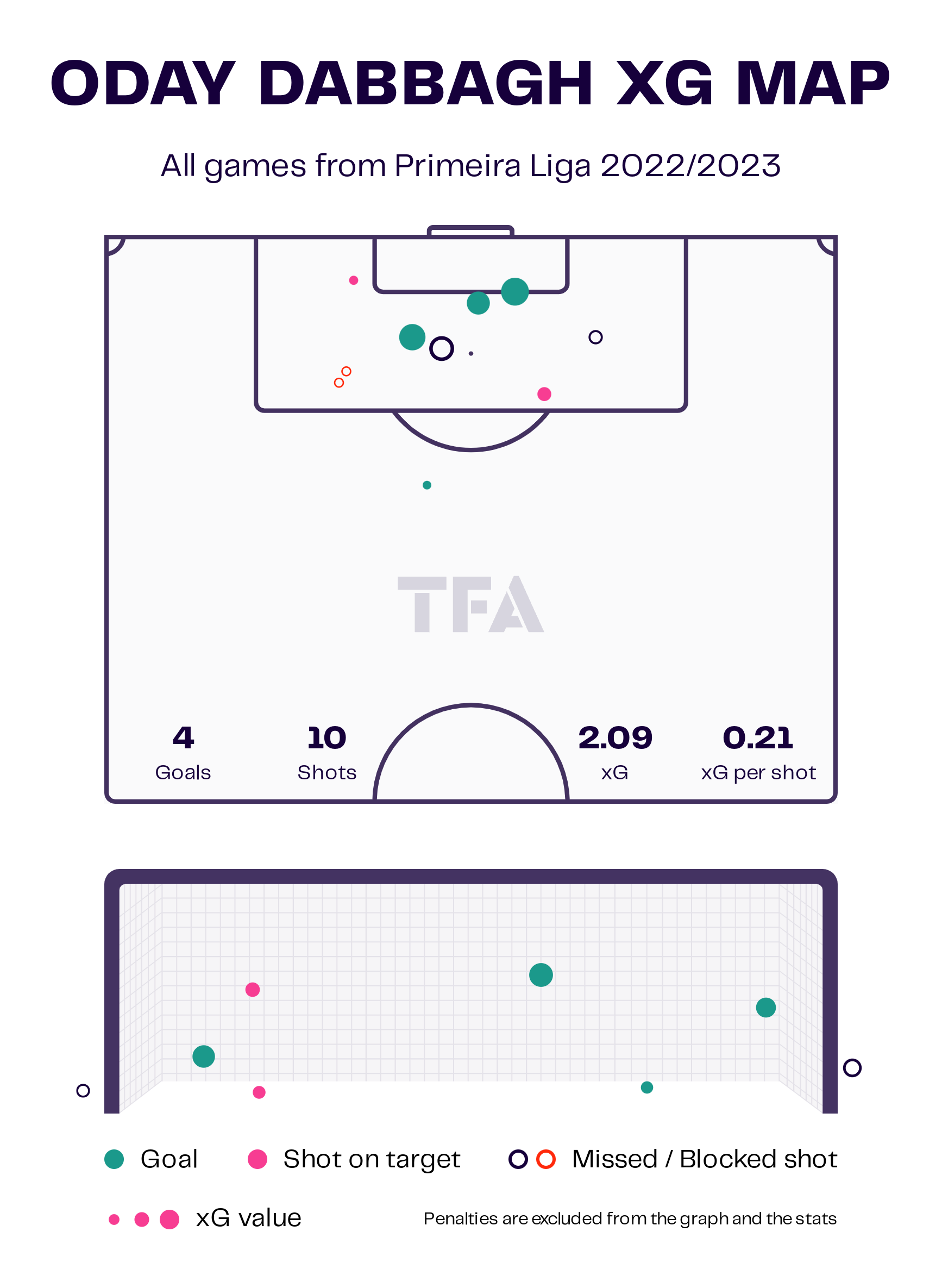 Thus far this season, Oday Dabbagh has found the back of the net four times, with an xG value of 2.09. He is scoring at the rate of 0.5 goals per match while averaging an xG rate of 0.37. The viz above depicts the player’s shot map from Liga Portugal 2022/23. He has attempted 10 shots, with six on target. Like a true centre forward, he scored most of his goals in the vicinity of the six-yard box, with one goal coming from quite a distance outside the penalty area. Dabbagh takes an average of 1.77 shots per match for Arouca with an impressive accuracy of 66.7%. 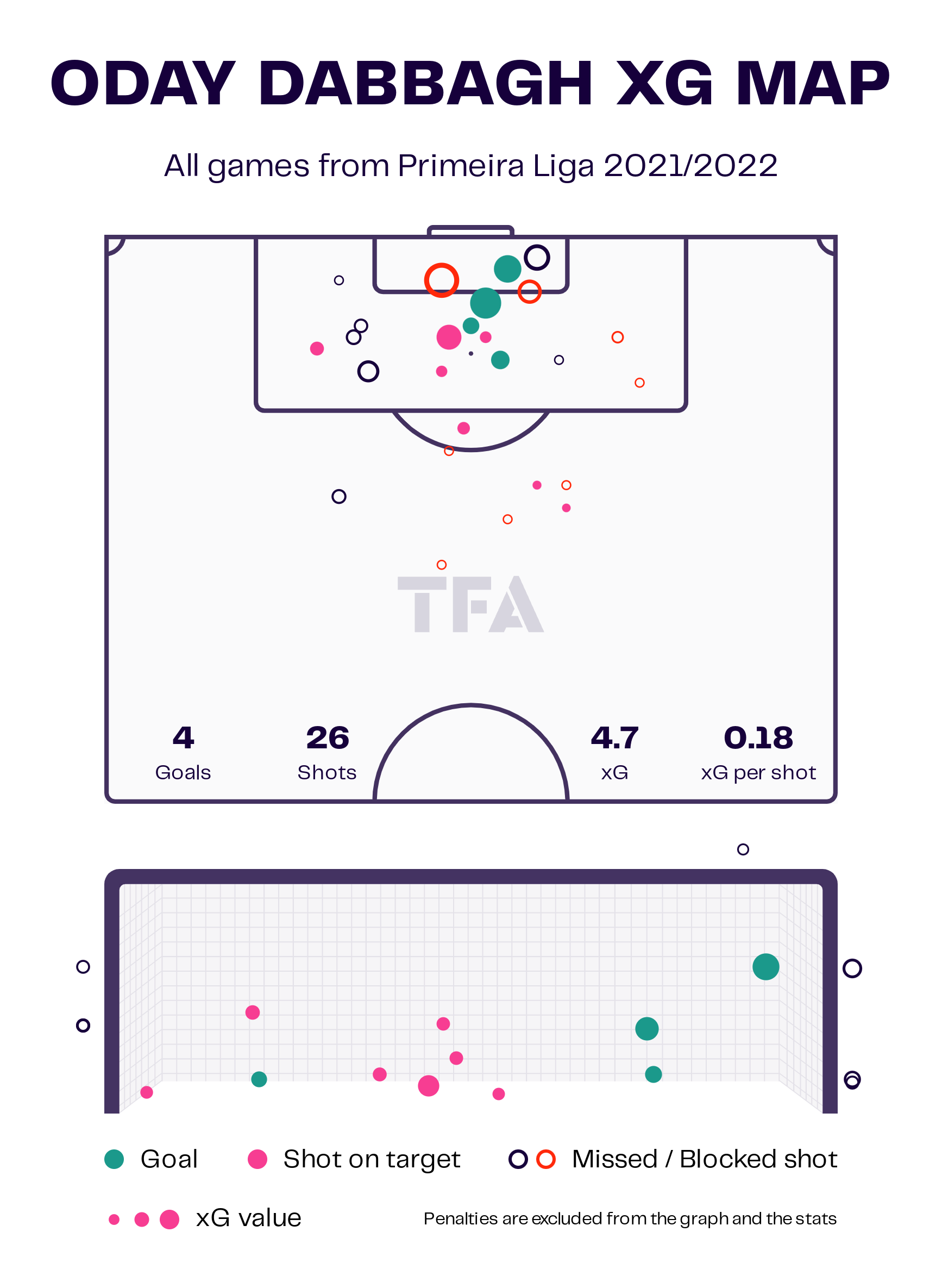 Compared to the Liga Portugal 2021/22 season, Oday Dabbagh took 26 shots and scored four goals for a total xG of 4.7. He scored all his goals from very close range while averaging 2.86 shots per game with 42.3% accuracy. He is attempting fewer shots this season, but with increased accuracy, and has already equalled his goal tally from the previous season in a much shorter period of time. This highlights his finishing ability and composure in front of the goal.

Oday Dabbagh with the ball 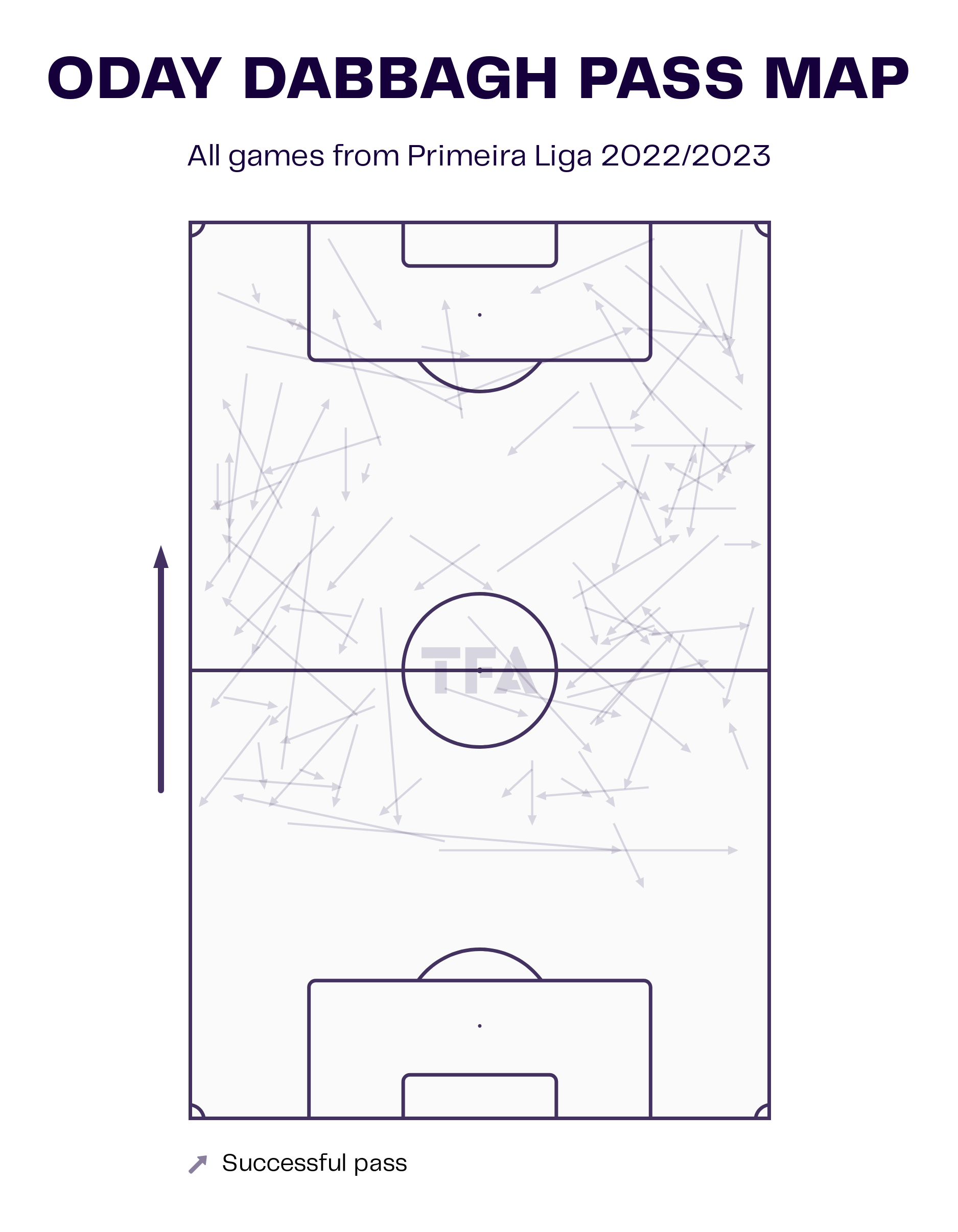 In addition to his goal-scoring talent, the 24-year-old is a sound passer of the ball. He drops into midfield and can hold onto the ball, which can prove vital in setting up counterattacking plays. Dabbagh attempts 21.44 passes per match with an impressive accuracy rate of 83.5%. Additionally, he makes 2.7 progressive passes and 1.42 passes into the penalty box per match. He has created two big chances this season with 0.6 key passes per 90 minutes. 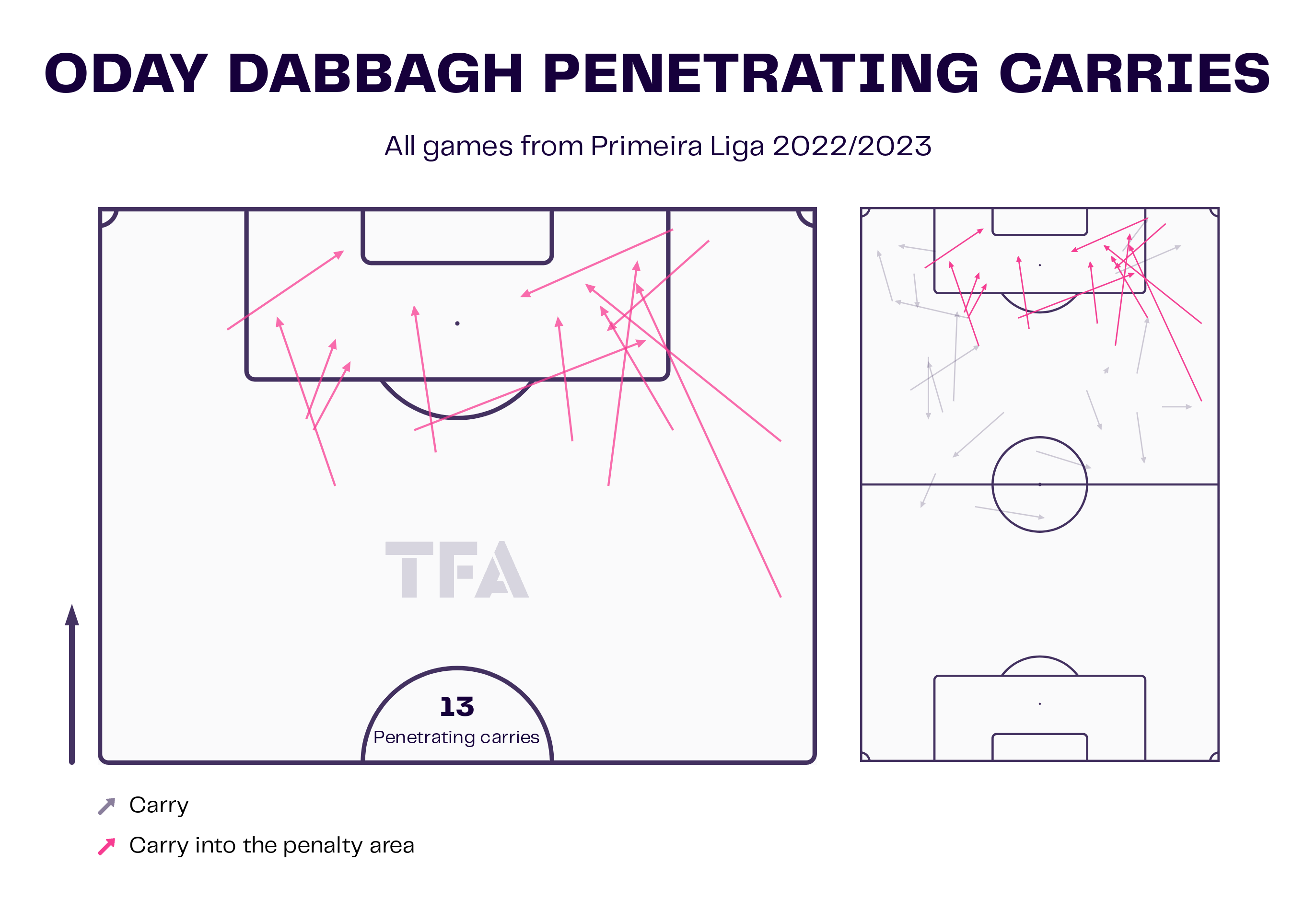 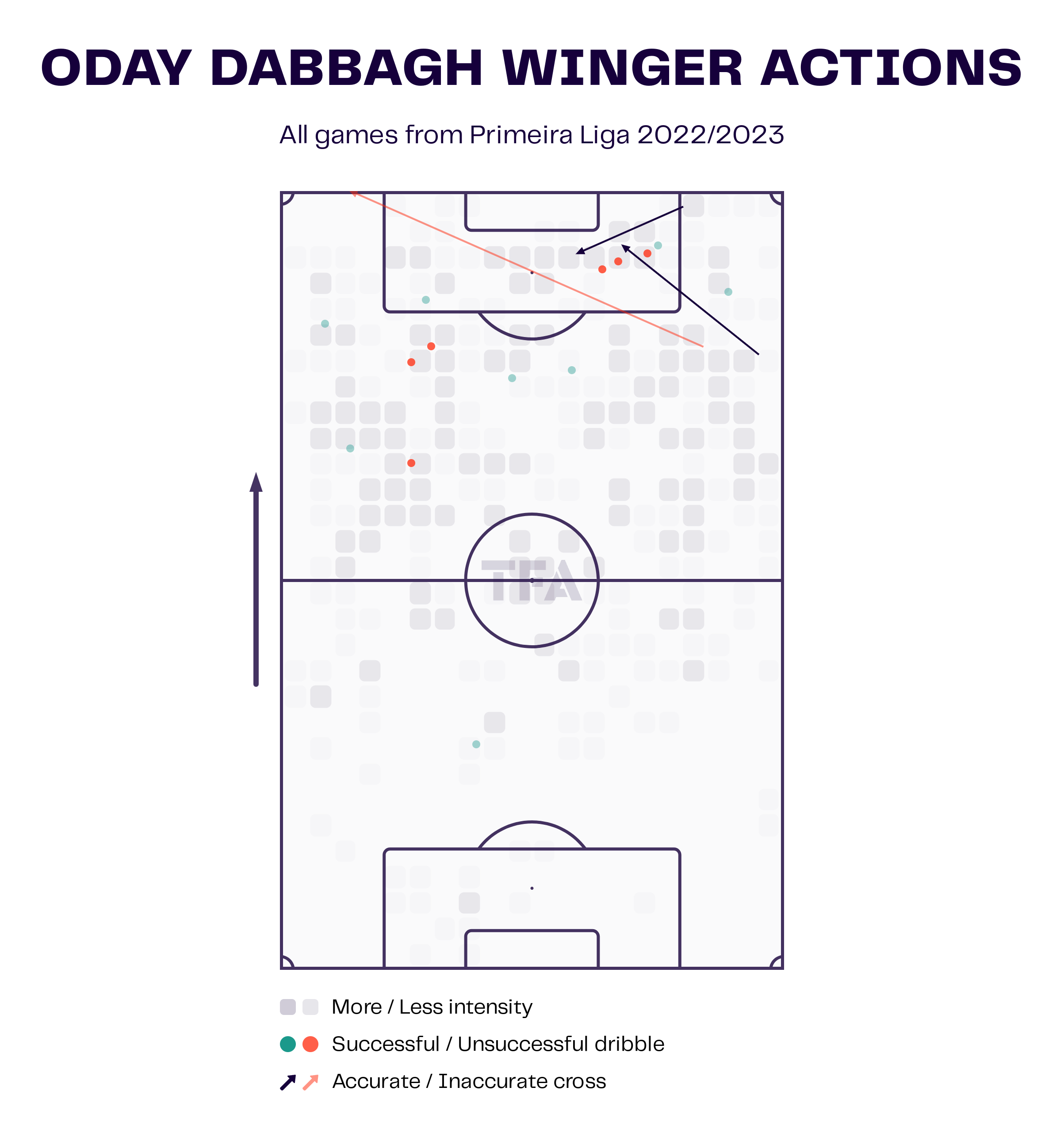 The two visuals above highlight Oday Dabbagh’s creative capabilities with the ball. The Palestinian forward has made 13 penetrating carries into the penalty box during his eight appearances. He has also performed quite a few winger actions, mainly dribbling in and around the penalty area. Currently, the forward attempts 2.48 dribbles per match (57.1%) and averages 1.6 progressive runs.

Oday Dabbagh has been gradually developing his trade and gaining prominence in Liga Portugal. He has performed well with Arouca and has become an important player for them in the process. Arouca will want their Palestinian forward to keep leading from the front as they chase a top-half finish in Liga Portugal.