Nuno Santos signed for Sporting CP in 2020 and has since become an integral part of the team. He has won multiple trophies with Sporting, most notably the Liga Portugal title in the 2020/21 season. But this season, as his team has struggled to strike the levels of consistency shown in recent seasons, Nuno Santos has once again proven his worth for the Lisbon side.

Even though Nuno Santos is classified as a winger, he features as the left wingback in Ruben Amorim’s 3-4-2-1 system. His contributions in both attack and defence have come to his team’s benefit in the current Liga Portugal campaign, as Sporting sits fourth in the table. Santos’ ability to overlap, provide the crosses, and track back when required has relieved the manager of some tension on the left flank. Below are some stats that delve into the impressive performances of Nuno Santos with Sporting in Liga Portugal 2022/23. 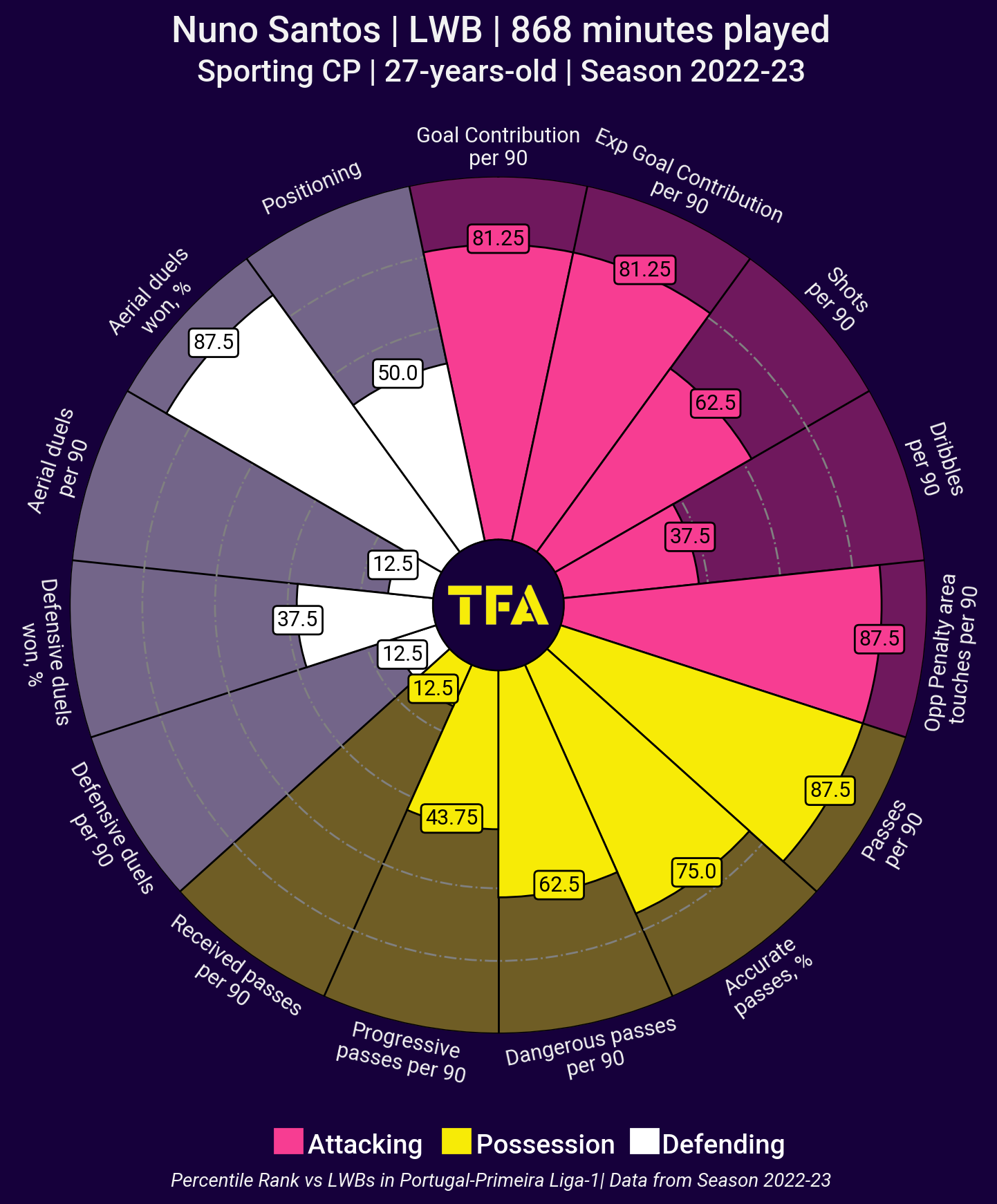 Nuno Santos has made 14 league appearances for the Lions this season, of which he has started 11 while averaging 72 minutes per game. The above visual shows the player’s percentile rank compared to other left-wingbacks in Liga Portugal. We can observe that Santos has a high rank in metrics like goal contribution, penalty area touches, pass attempts, accurate passes, and aerial duels won. Apart from that, he does decently in terms of shots and dangerous passes per 90.

Traits of a modern wingback 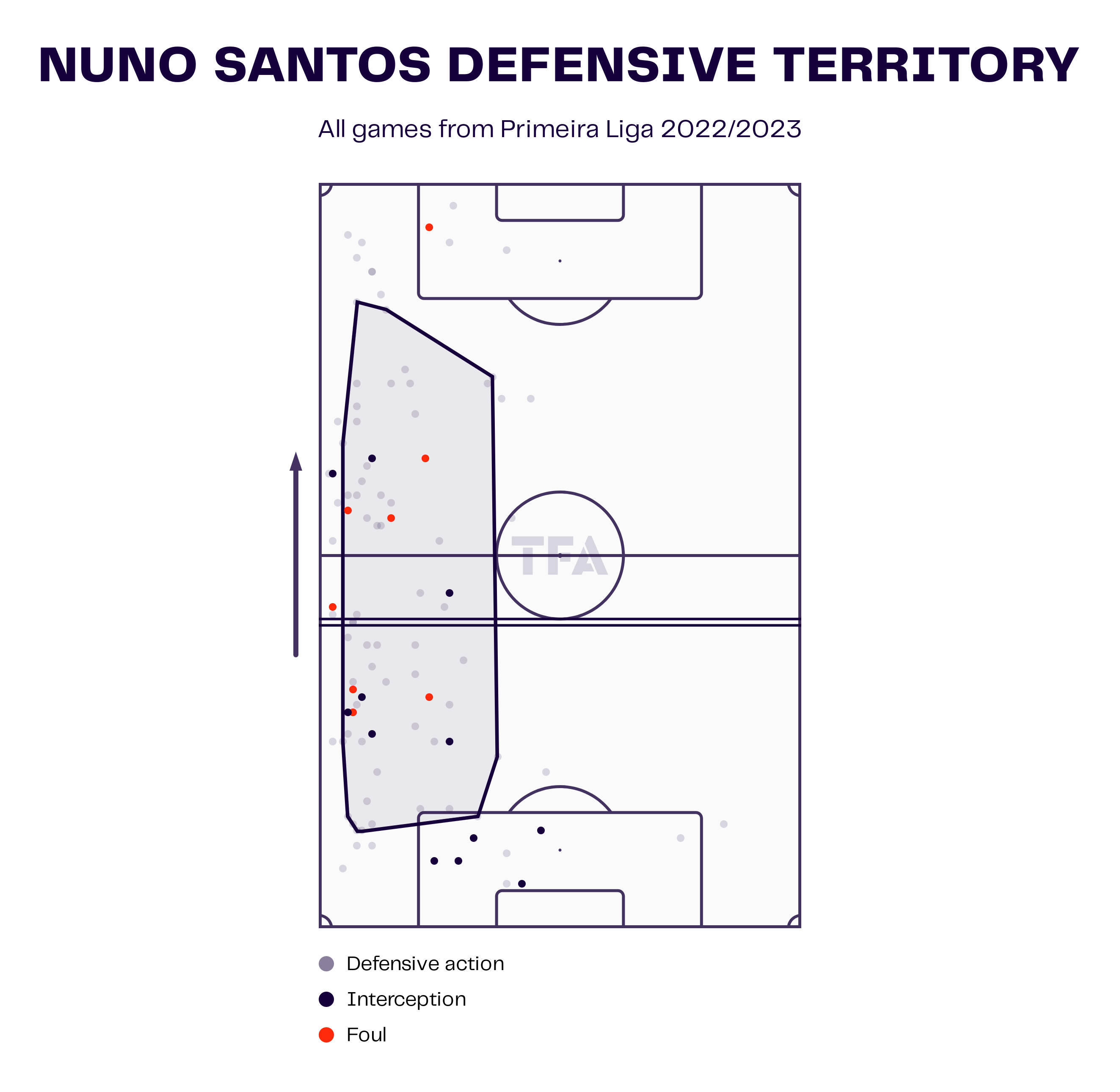 While Nuno Santos’s responsibility is to provide cover for the back three from the left side, he also has the affinity to drift forward in attack. As the above visual suggests, he guards the left flank well and contests 3.03 defensive duels per match this season, winning almost 60% of them. The wingback also makes 2.37 interceptions and 5.24 tackles per game, contributing to the five clean sheets kept by his team. In terms of aerial duels, he has an 80% win rate for such contests. 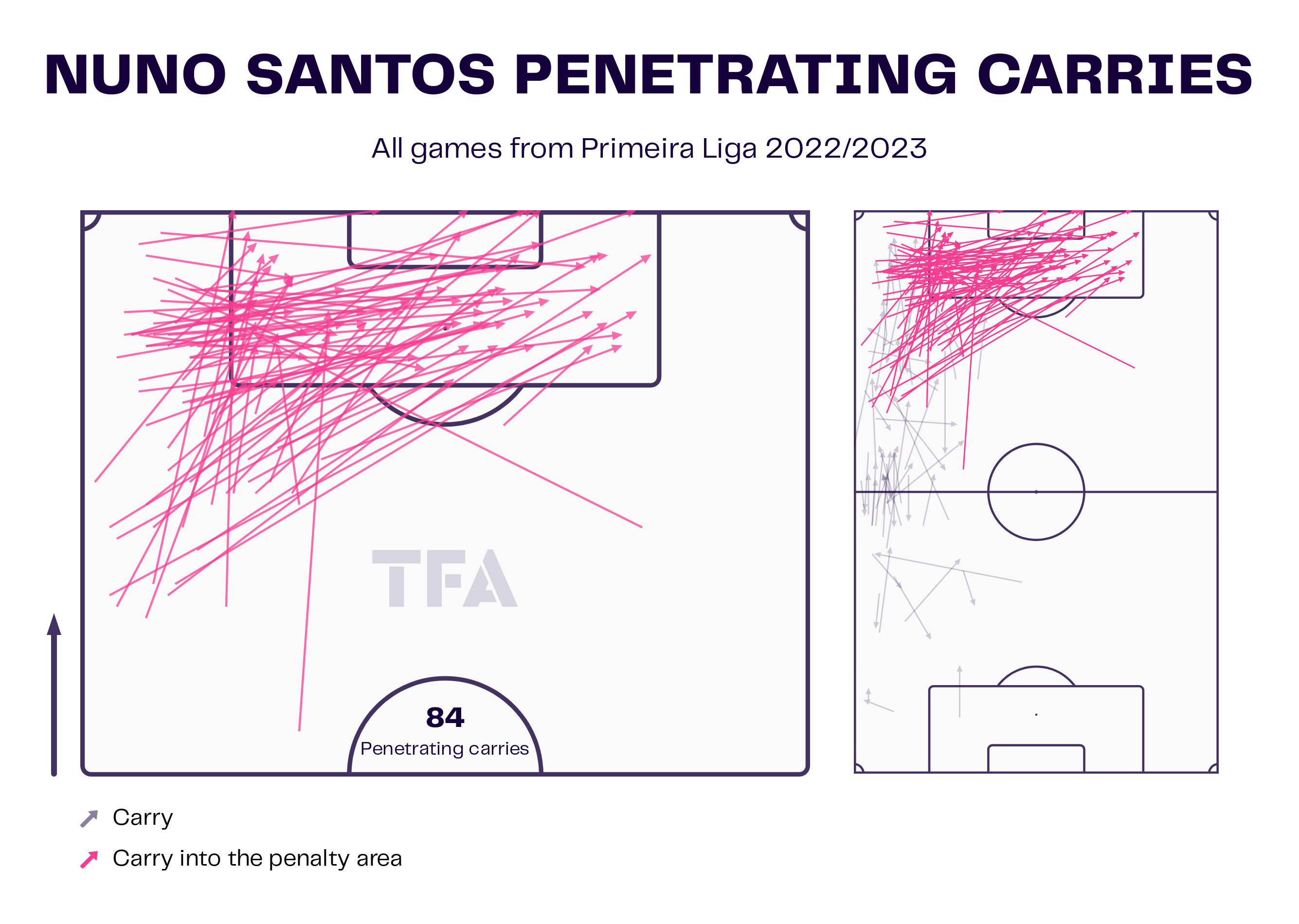 Nuno Santos has been crucial on the left flank for Sporting. He receives the ball in the midfield or the defensive half and tends to carry it forward. As shown in the viz above, he has made 84 penetrating carries into the penalty area. Utilizing the spaces on the left flank, he helps his team launch quick attacks with these carries. Furthermore, he makes 1.15 progressive runs per match and averages 3.28 touches in the penalty area. 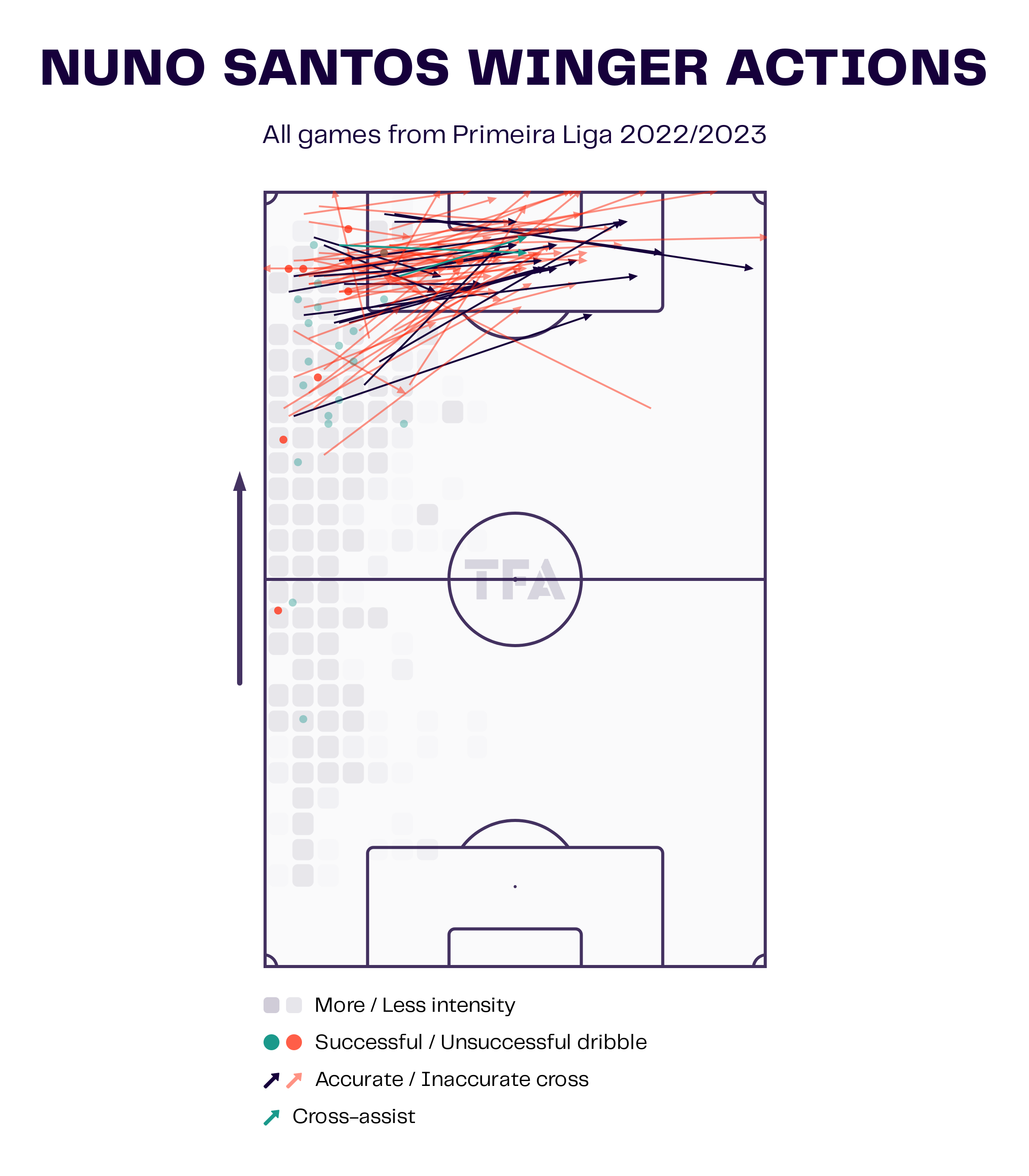 Santos spends more time in the attacking half and forces the opposition to mark him, leaving spaces for his teammates to occupy. In the above illustration, we can see the winger actions performed by the player. He has the ability to take on players 1v1 and deliver plenty of crosses into the box. The left wingback attempts 2.37 dribbles per match and delivers a high average of 6.9 crosses. 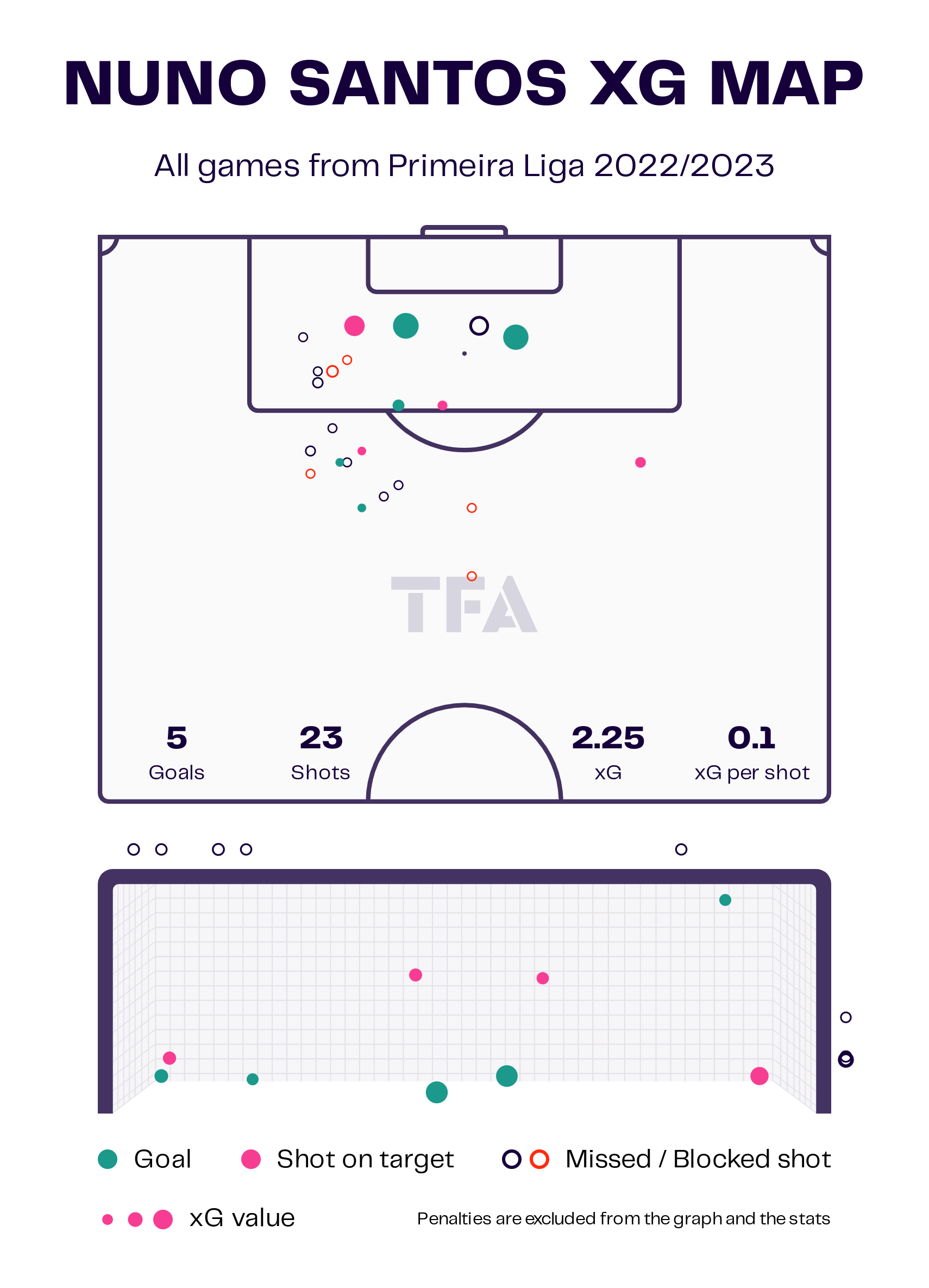 Nuno Santos has been one of Sporting’s top performers this season, scoring five goals and providing three assists thus far in the league. He overlaps well into the final third and provides his team with width and an attacking threat. He has done well to score three goals from close range, with the other two coming from efforts outside the box. The wingback has taken a total of 23 shots, averaging 1.9 shots per match with an accuracy of 43.5%.

Last season, he contributed with six goals and nine assists. Nuno Santos is already on track to better his goal-contribution tally from the previous year. 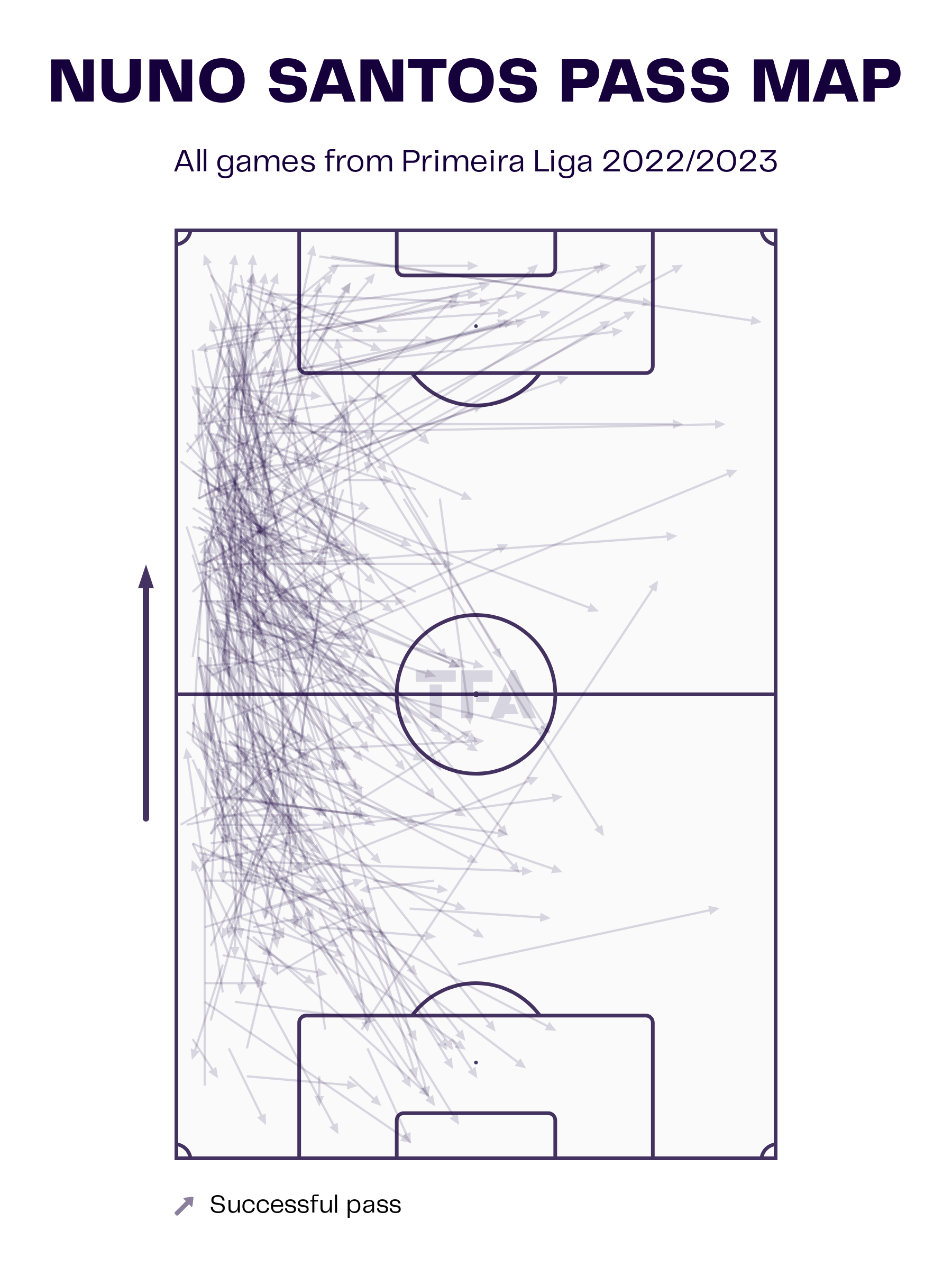 The 27-year-old Portuguese also has great passing skills. He averages around 47 passes per match with a completion rate of 80%. We can observe from the pass map above how he stays wide to receive the ball and provides cutbacks. Moreover, he links up well with the midfielders and wide forwards. Santos provides 1.2 shot assists per match and has created five big chances till now. Additionally, he makes 3.7 passes to the final third and 6.06 passes to the penalty area per match.

Nuno Santos is enjoying a good campaign with Sporting CP. He has been one of the key contributors to the team and stands out for his versatility. The Lions will be counting on consistent performers like him to end this season on a high note as they look to push into the top three.