After the likes of Julian Alvarez and Facundo Buonanotte, yet another Argentine talent is heading to European football. Mateo Tanlongo is one of the latest names linked with a move to Liga Portugal. Credible sources state the defensive midfielder born in 2003 has already agreed to a long-term contract until 2027 with Sporting CP, considered one of the Big Three clubs in Portugal.

Joining Rosario Central in 2010, Mateo Tanlongo progressed through the club’s youth academy. In June 2020, the club promoted him to the first team. Ultimately, 2021/22 turned out to be the breakthrough season for the young midfielder. Currently, he also represents the Argentina U20, football team. While Tanlongo seems like an interesting addition to Sporting CP, his departure from his boyhood club has involved some drama.

Amidst reports of a transfer to Lisbon, the player failed to report for Rosario’s pre-season routine despite being summoned twice. His current contract with the Argentine club expires on December 31, 2022, after which he will officially join the Portuguese powerhouse. The stakeholders involved in this transfer will have to tend to the legal aspects of this deal. Meanwhile, we will look at some of the stats that indicate why Sporting CP are aggressively pursuing the highly-rated Argentine.

In the 2021/22 season, Mateo Tanlongo began to feature regularly on the Rosario Central teamsheet. He made 20 appearances in the Argentine top division, starting 12 matches and averaging 55 minutes per game. Besides, he has nine appearances across cup competitions. 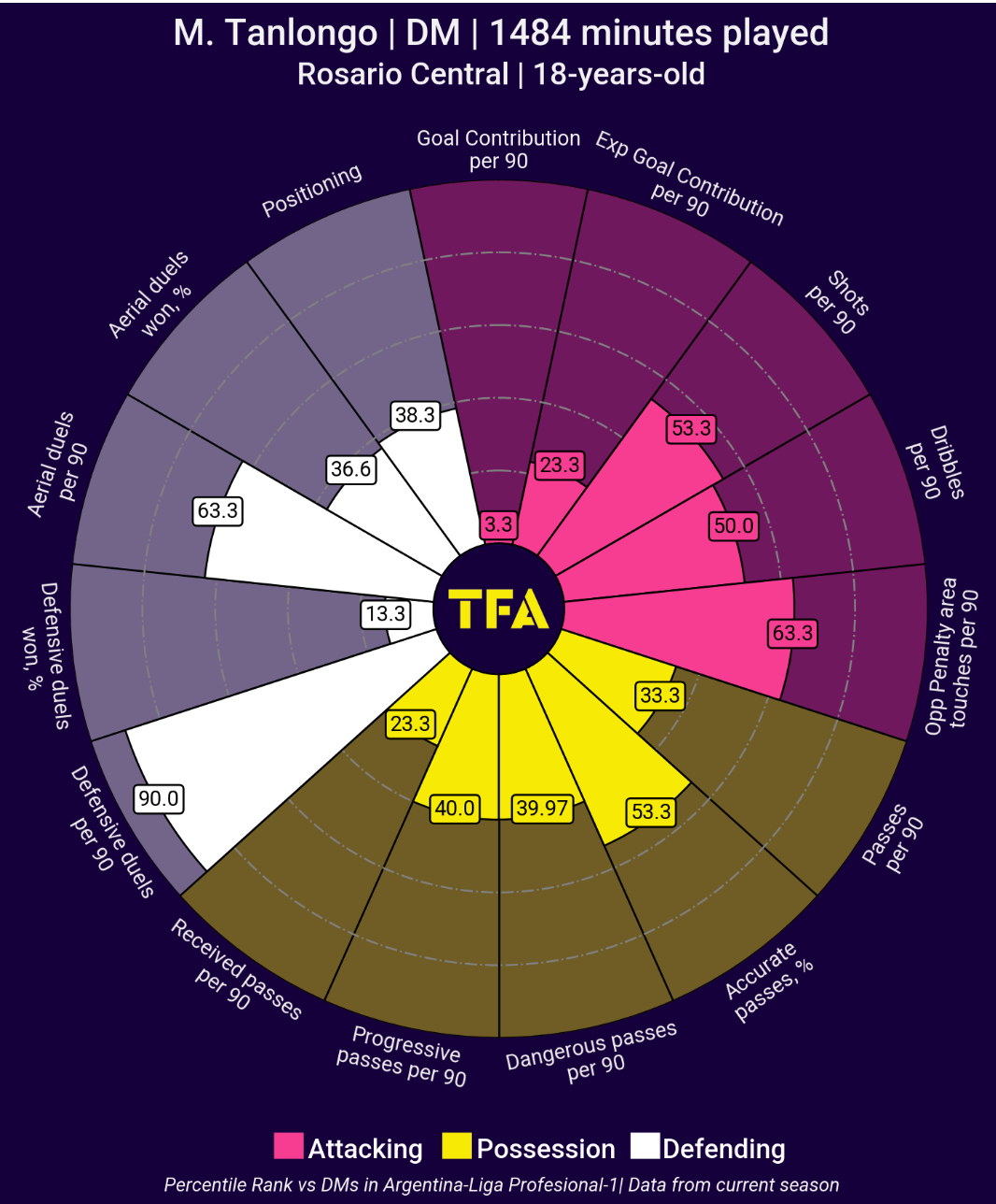 Often deployed as a holding midfielder, the 19-year-old featured in the heart of Rosario’s midfield. The above viz shows the stats of the player in comparison to the other players featured as defensive midfielders in Liga Profesional. Mateo has a high percentile score in the departments of defensive duels, aerial duels, and opposition penalty area touches (all per 90 minutes). His percentile rank in areas like shots, dribbles, and accurate passes per 90 is also decent. 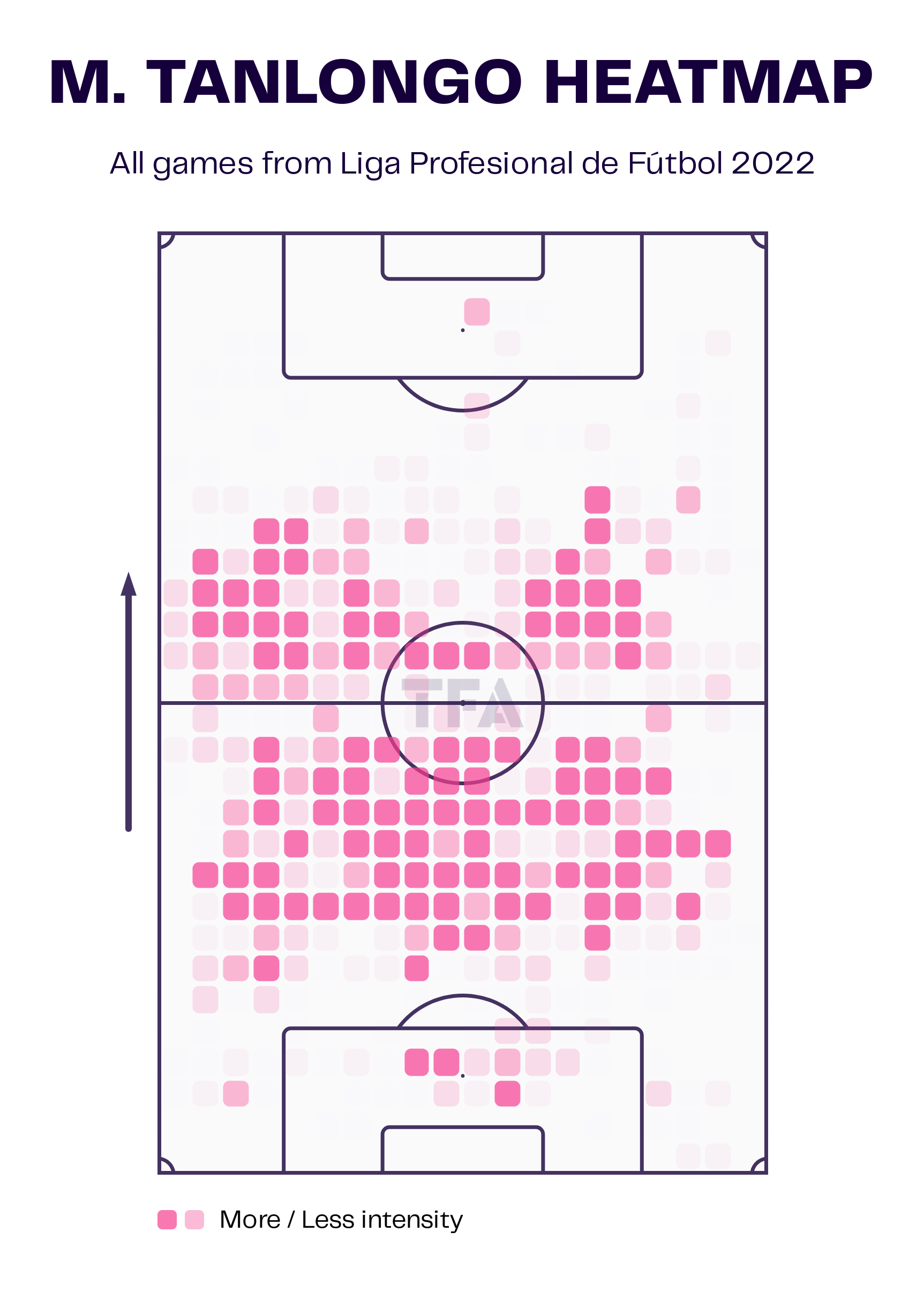 The heatmap above highlights the areas of the pitch where the player is performing the most actions. Tanlongo’s actions are evenly spread across the middle third, especially in his own half. Meanwhile, the viz below depicts the defensive actions performed by the player. It also shows the average area of engagement and the height of his average defensive line. 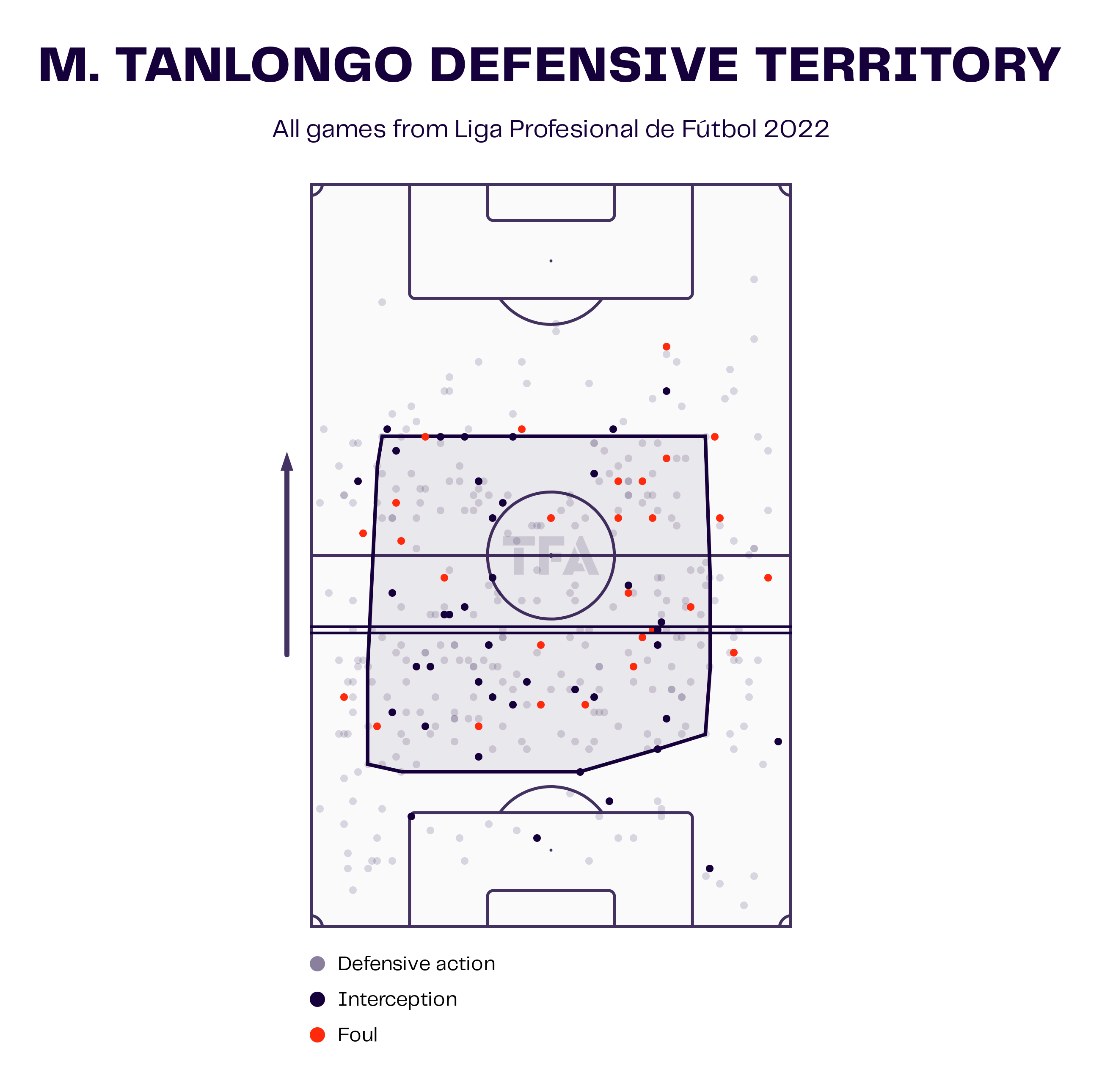 Another interesting attribute of the Argentine’s talent is his ability to regain possession in the opposition’s half, as seen below. He seems well capable of making counter-pressing recoveries after possession losses as well as dangerous recoveries that eventually lead to a shot. In his breakthrough season, the young midfielder averaged 1.1 tackles and 1.9 interceptions per game. 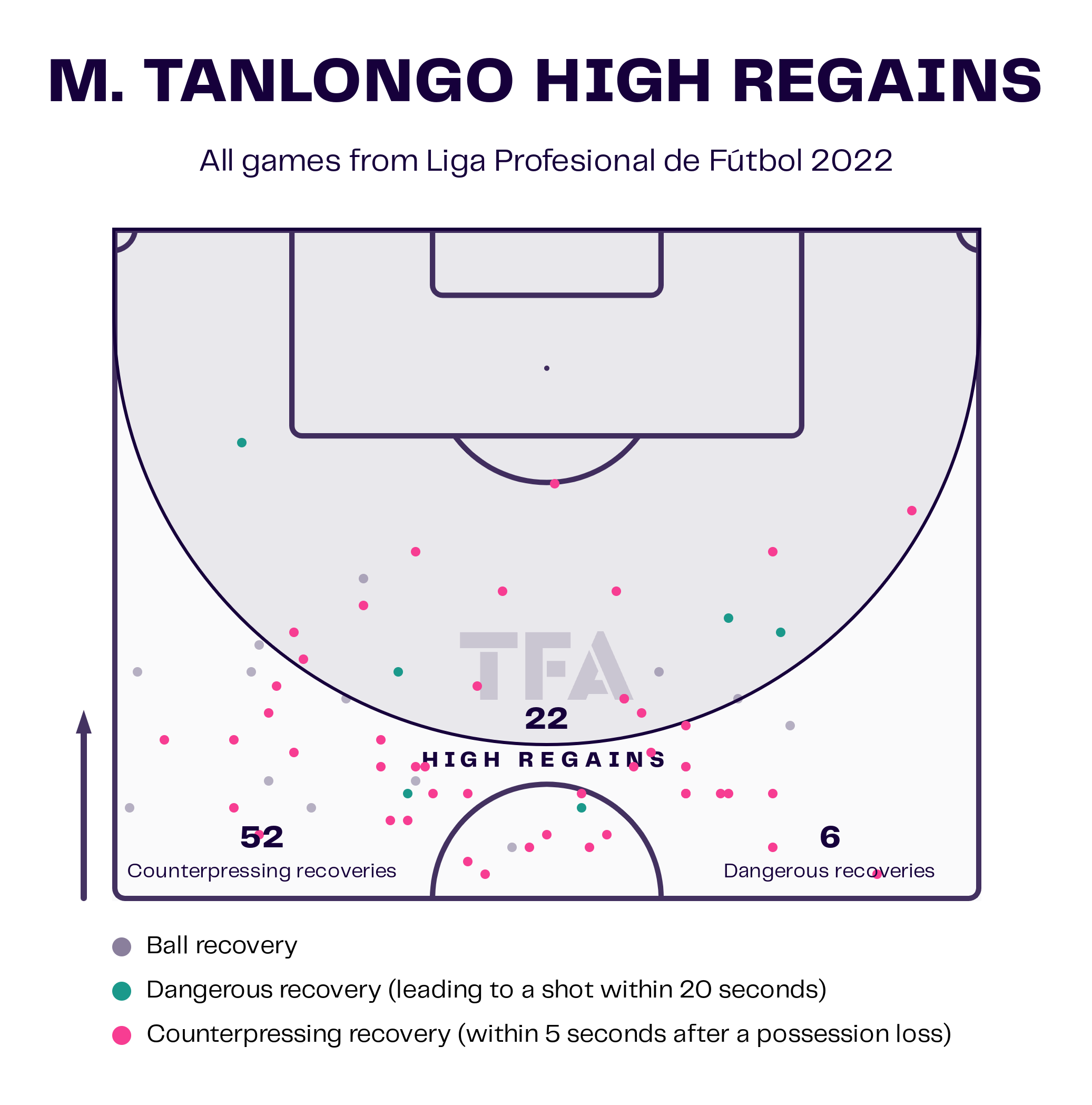 Based on these stats, we can say that Mateo Tanlongo is defensively strong and adept at reading the game. He is capable of playing as the sole defensive midfielder in a team that likes to press high. Although he possesses the sharp technical ability, there is a lot of potential in developing his attacking attributes. While the defence is Mateo’s strength, there is still scope for him to improve on parts of his game like ball progression, penetrating carries, and shot assists. He made 22 high regains, 52 counter-pressing recoveries, and six dangerous recoveries.

How can Tanlongo improve Sporting CP and whom can he replace?

Sporting currently sits in fourth place in Liga Portugal. It has been an underwhelming season thus far for the Green and Whites based on the standards displayed by them in recent years. While they have scored 26 goals in 13 games, they have also let in 15, the most among the top seven so far. They will certainly look to sort out the defensive side of their game. 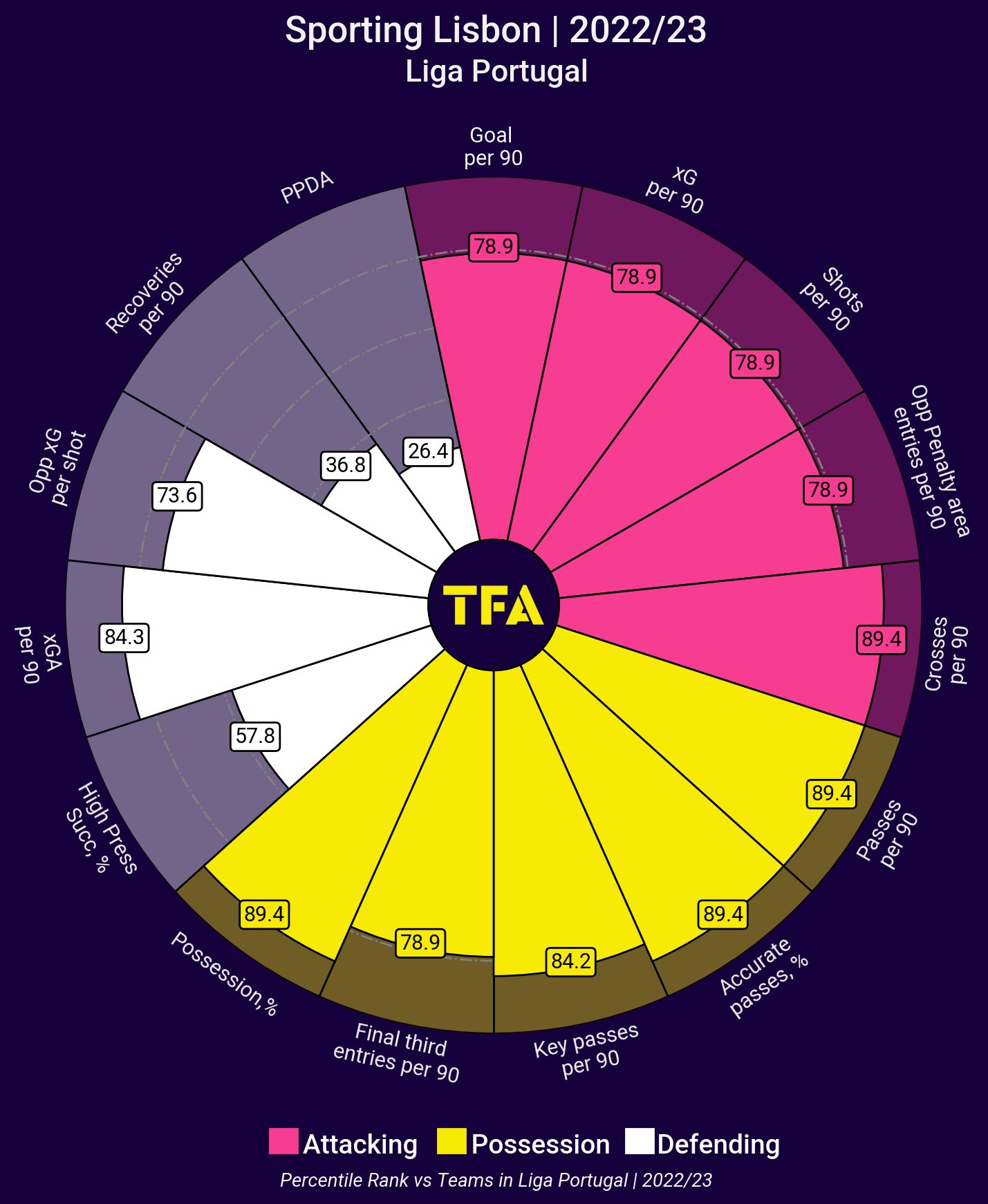 The timely addition of Tanlongo in January 2023 will reinforce the club for the league’s second phase. Amidst injury concerns for midfielders Daniel Braganca and Manuel Ugarte, with Hidemasa Morita featuring regularly, the young Argentine will bring some much-needed squad depth to Sporting’s push for Champions League qualification.

Meanwhile, Brazilian midfielder Eduardo Henrique is a player Tanlongo could gradually replace at Lisbon. The 27-year-old spent the 2021/22 season on loan at Saudi Pro League club Al-Raed, and Sporting could be looking for a suitable replacement in the near future. The viz below shows the comparison between the two players in their respective leagues. It can be observed that Eduardo has better stats than Tanlongo, barring a couple of parameters. However, with age on his side, the Argentine will have plenty of time to improve his overall game. 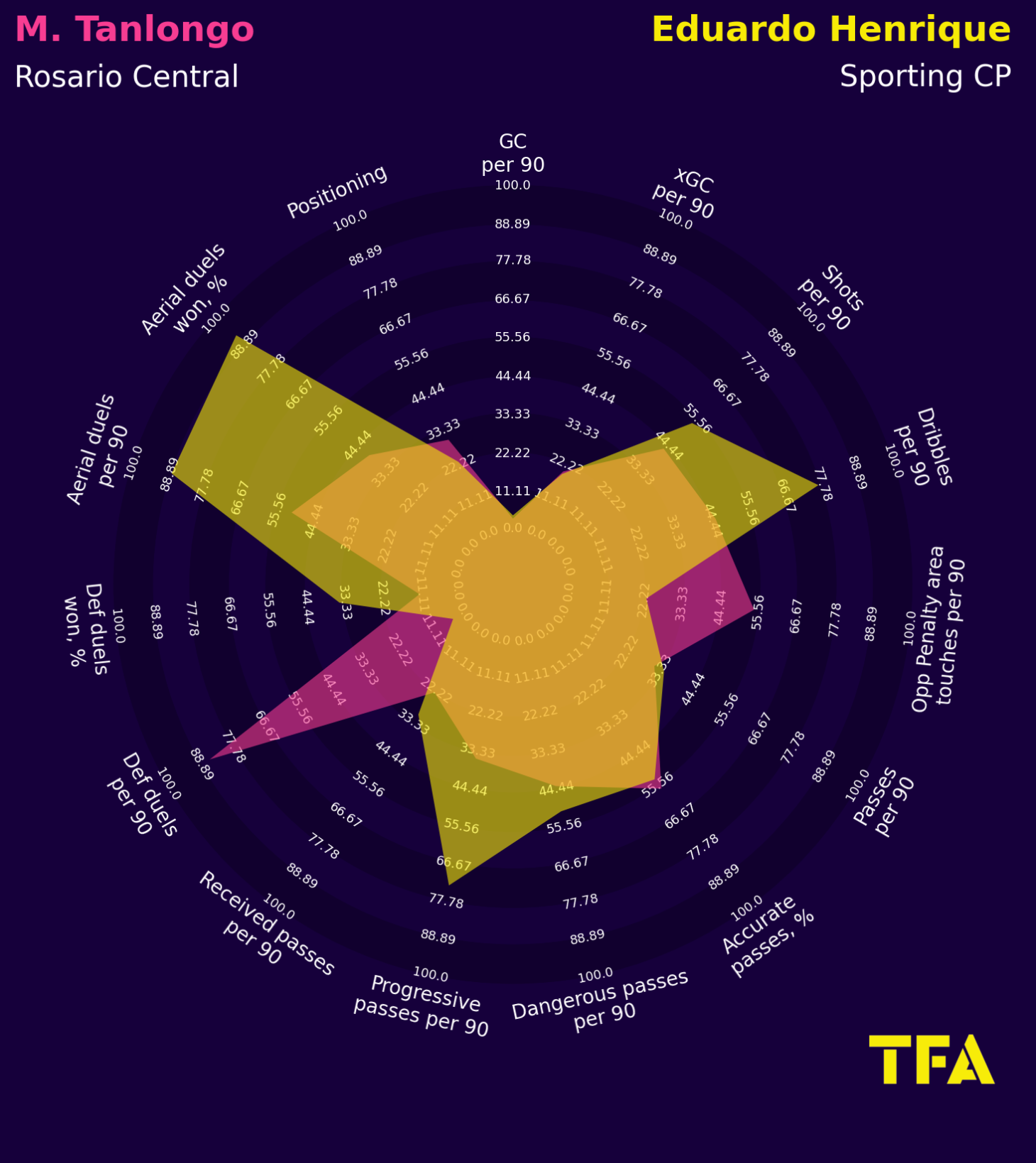 Mateo Tanlongo will join Lisbon as a free agent, meaning the deal will have much less risk involved. He will be among the bargain additions in a volatile January transfer market. At just 19 years of age, Sporting will have ample opportunities to pass him on with some profit in the future if the deal doesn’t work out. Otherwise, if Lisbon lives up to its reputation of developing young talent into world-beaters sought after by the top clubs, he could become a hot prospect.

Transfer Analysis: Can the veteran lead his former team to UCL qualification?

Transfer Analysis: Why did Portuguese clubs show their interest in the 20-year-old Brazilian defender?