Maritimo are currently second from bottom in Liga Portugal 2022/23, having taken only ten points from 16 matches. Currently five points from safety, Maritimo find themselves in a precarious spot. They achieved a tenth-place finish last season, but seem destined to get relegated after starting the season with a string of poor results. This season in Liga Portugal, Maritimo’s form is very poor overall, with two wins, four draws, and ten losses. As a result of this performance, they are currently ranked 17 out of 18 teams in Liga Portugal after winning 13% of their matches.

Maritimo opened the season in horrible fashion with eight consecutive defeats. However, their form has shown slight improvement in the last six matches, where they have taken eight points from two wins and two draws. These performances have generated a little bit of momentum for struggling Maritimo and have put them in a better position to pull themselves away from the relegation zone, but it will require a monumental effort. The following stats depict Maritimo’s most recent Liga Portugal 2022/23 performances. 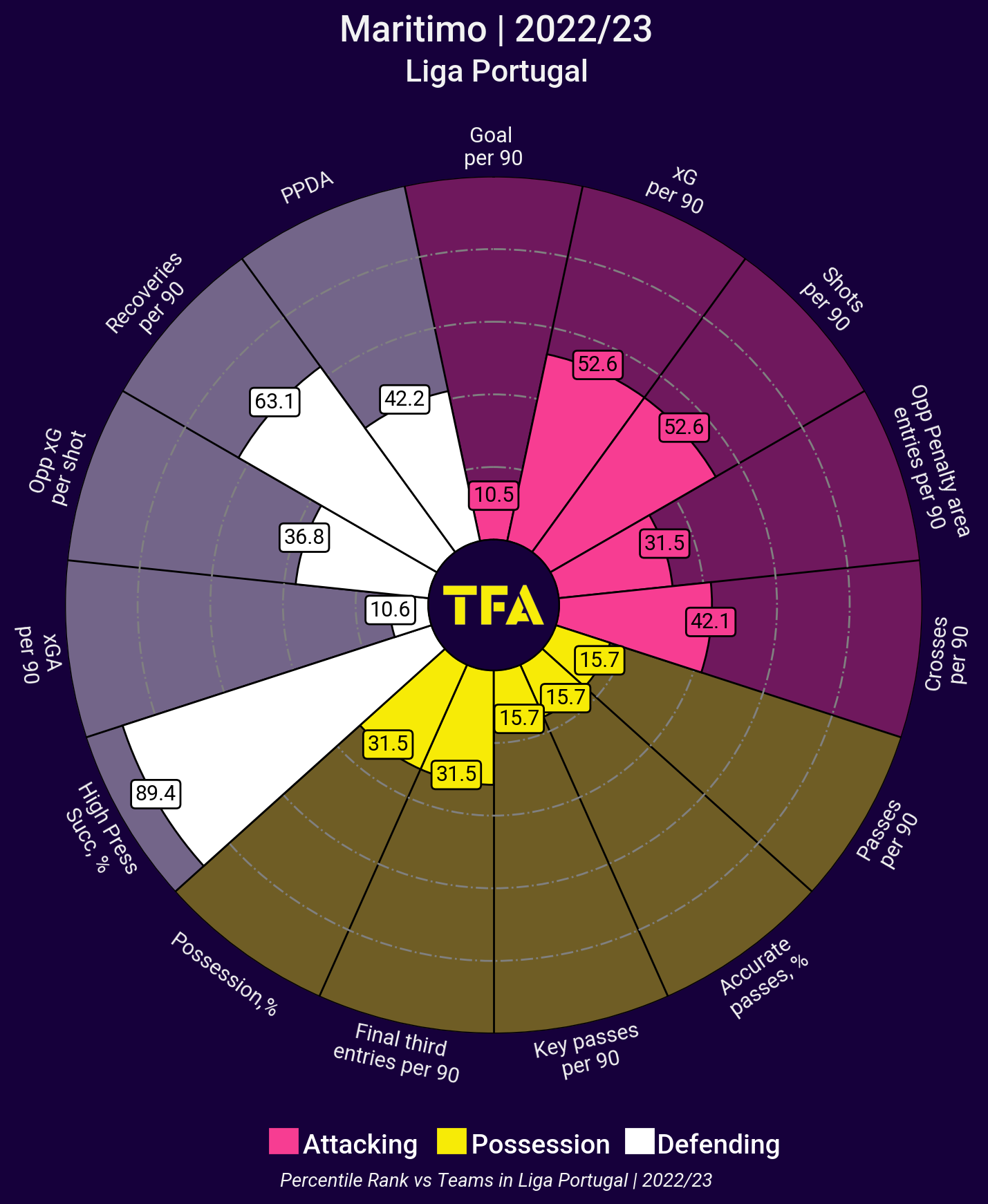 Maritimo have scored only ten goals and conceded 31 in the league this season. There is a clear disparity between the number of goals they score and concede. The viz above shows the percentile rank of the team’s stats in comparison to other teams in Liga Portugal. They possess a very low rank with respect to scoring goals, opposition penalty area entries, various types of passes, and xGA. While they seem to be doing well in terms of recoveries and a high pressing success rate, their stats are underwhelming in most areas. 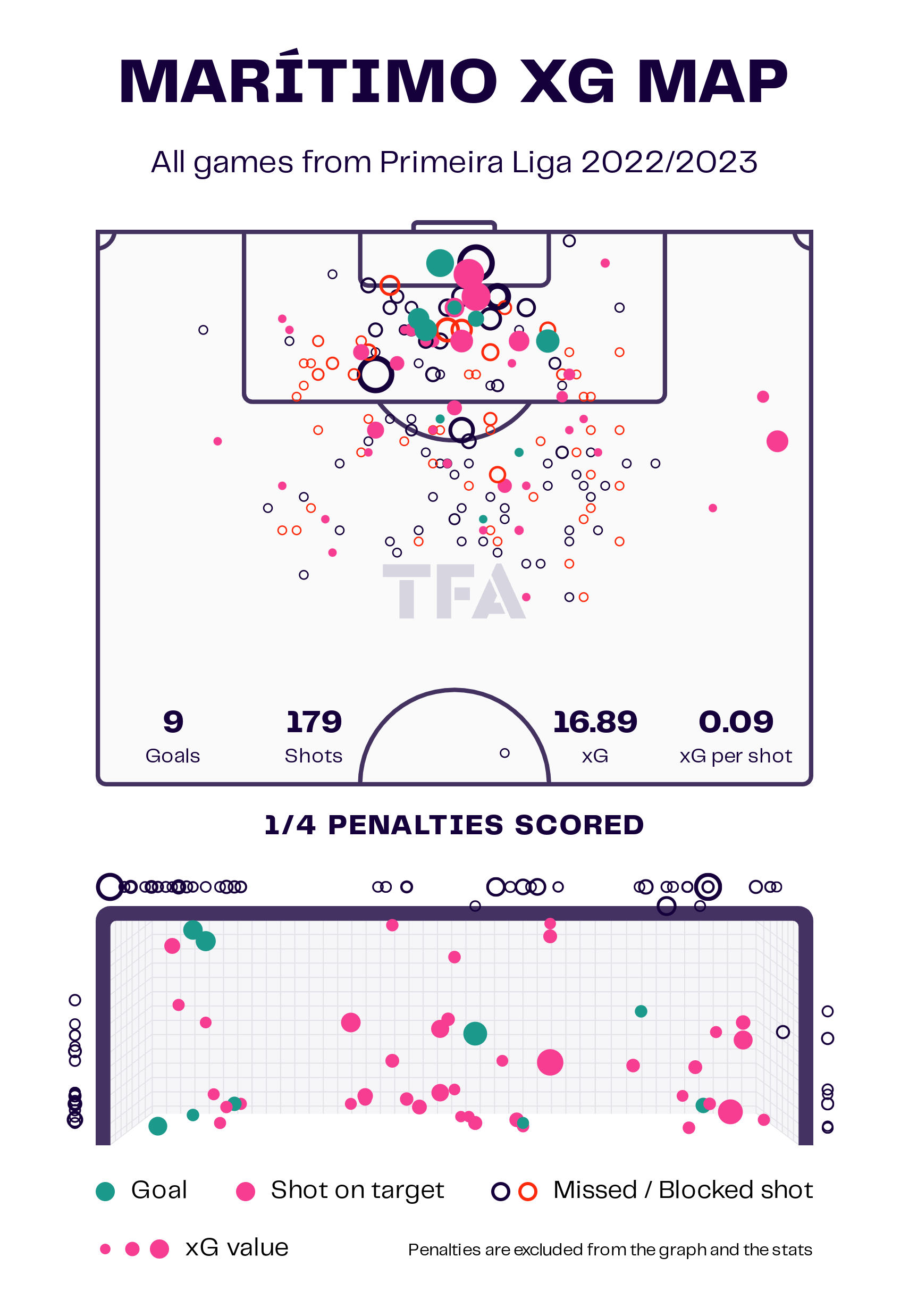 Maritimo have scored the second-lowest number of goals (ten) in Liga Portugal 2022–23. Their goal output is really inferior in comparison to the number of shots taken (179). The team is massively underperforming in terms of xG too. Their average of 0.63 goals per match is noticeably lower than their xG rate of 1.25 per match. They take 11.44 shots per match, with 27.4% of them landing on target.

The viz above shows the team’s shot map from this season. We can see that many of their shots from the penalty area have missed the target or been blocked. They have also tried their luck from a distance but without much consequence. Additionally, the team has only converted one out of the four penalties awarded. The numbers reflect Maritimo’s lack of quality in front of the goal and their inability to finish chances. 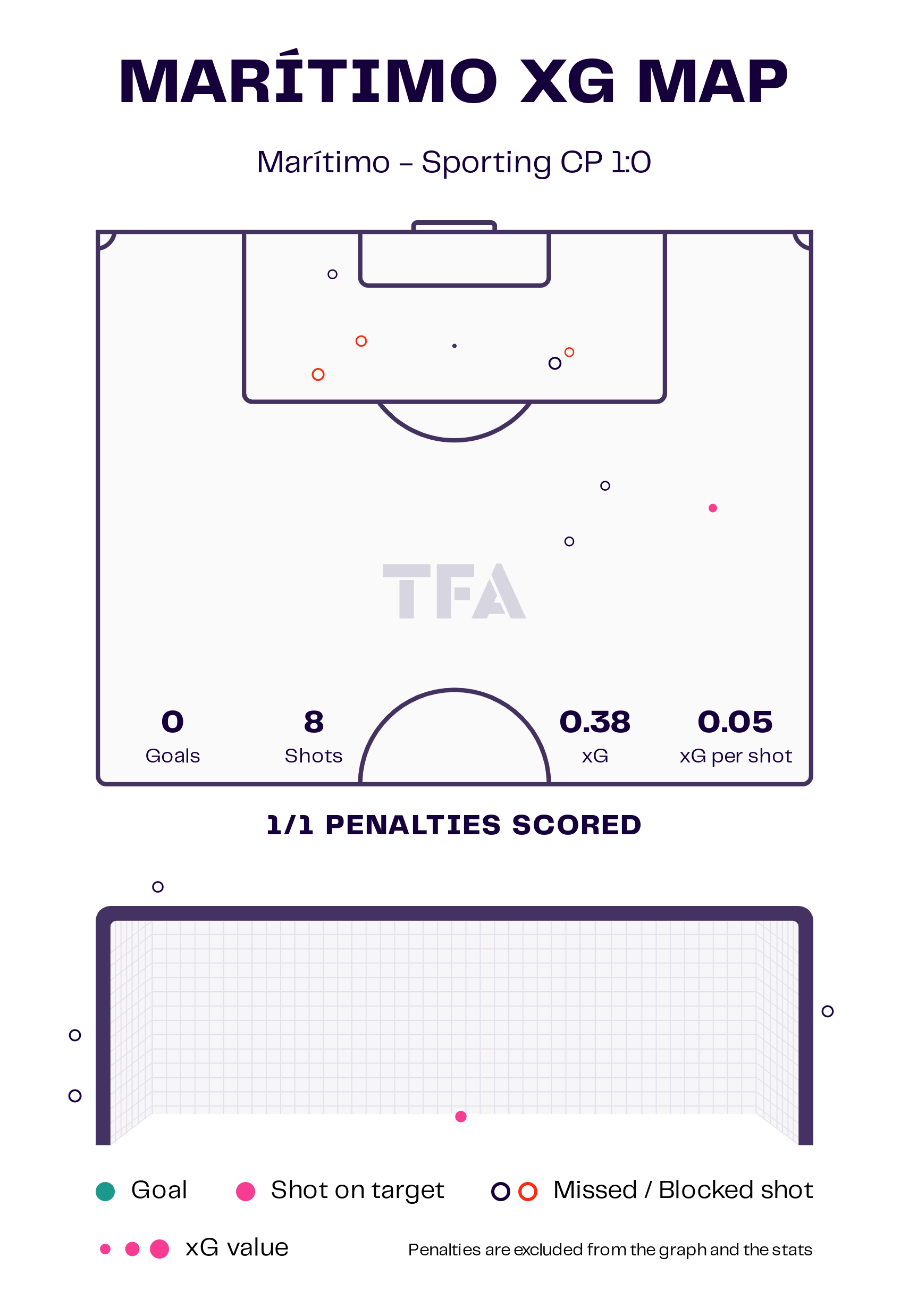 The viz above shows Maritimo’s shot map from their recent home fixture against Sporting CP in Liga Portugal. While the team has struggled in front of goal all season, Claudio Winck took charge of the situation and converted a penalty to ensure three precious points for the strugglers. Maritimo took nine shots with two on target and ended the game with an xG rate of 1.14, a value higher than that of their noteworthy opponents. The home team created 20 positional attacks and took five shots from these plays. Meanwhile, they also launched seven counterattacks, with one of them ending with a goal attempt.

Maritimo’s defence has been extremely vulnerable this season, having conceded the most goals thus far (31). They concede 1.94 goals per match and average an xGA rate of 1.88.  The above viz shows the defensive territory of the team from the current Liga Portugal season. It indicates that Maritimo are involved in a lot of defensive actions in the defensive and middle thirds. The team makes 80.44 recoveries and 42.81 interceptions per match. Maritimo wins 58.5% of the defensive duels and 45.5% of the aerial duels contested per 90 minutes. They commit 13.56 fouls on average and haven’t given up any fouls in the penalty box. 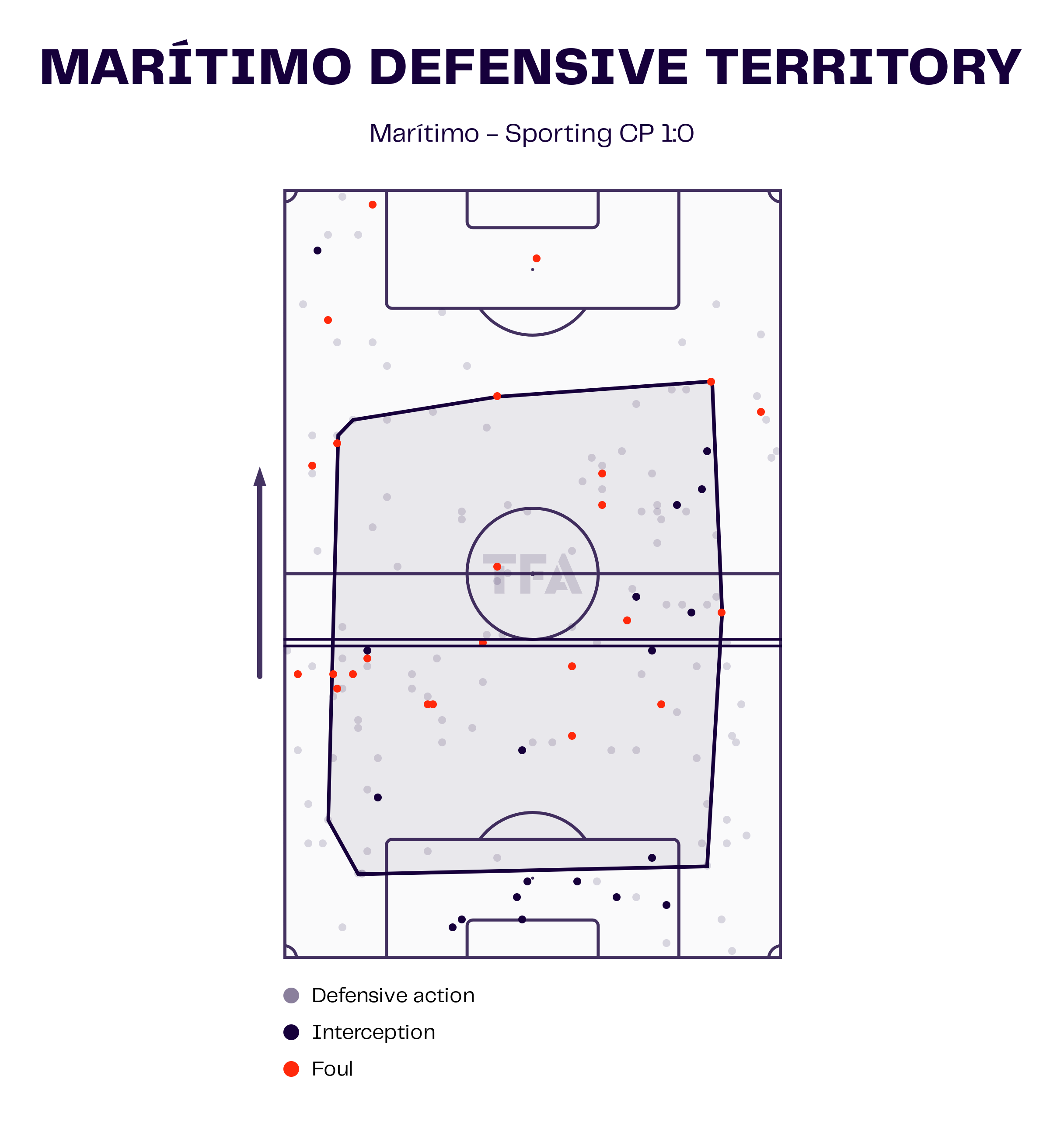 The above visualisation depicts Maritimo’s defensive territory from their match against Sporting CP in Liga Portugal. Maritimo gave one of their best performances of the season and won the match 1-0 against such eminent opposition. The visitors made as many as 53 interceptions in the 90 minutes played and had a success rate of 51.85% for defensive duels. They also made several crucial interceptions inside the box to deny the opposition from scoring, keeping a rare clean sheet in the process. Maritimo players also made 35 clearances in the match and won 40% of the aerial duels. 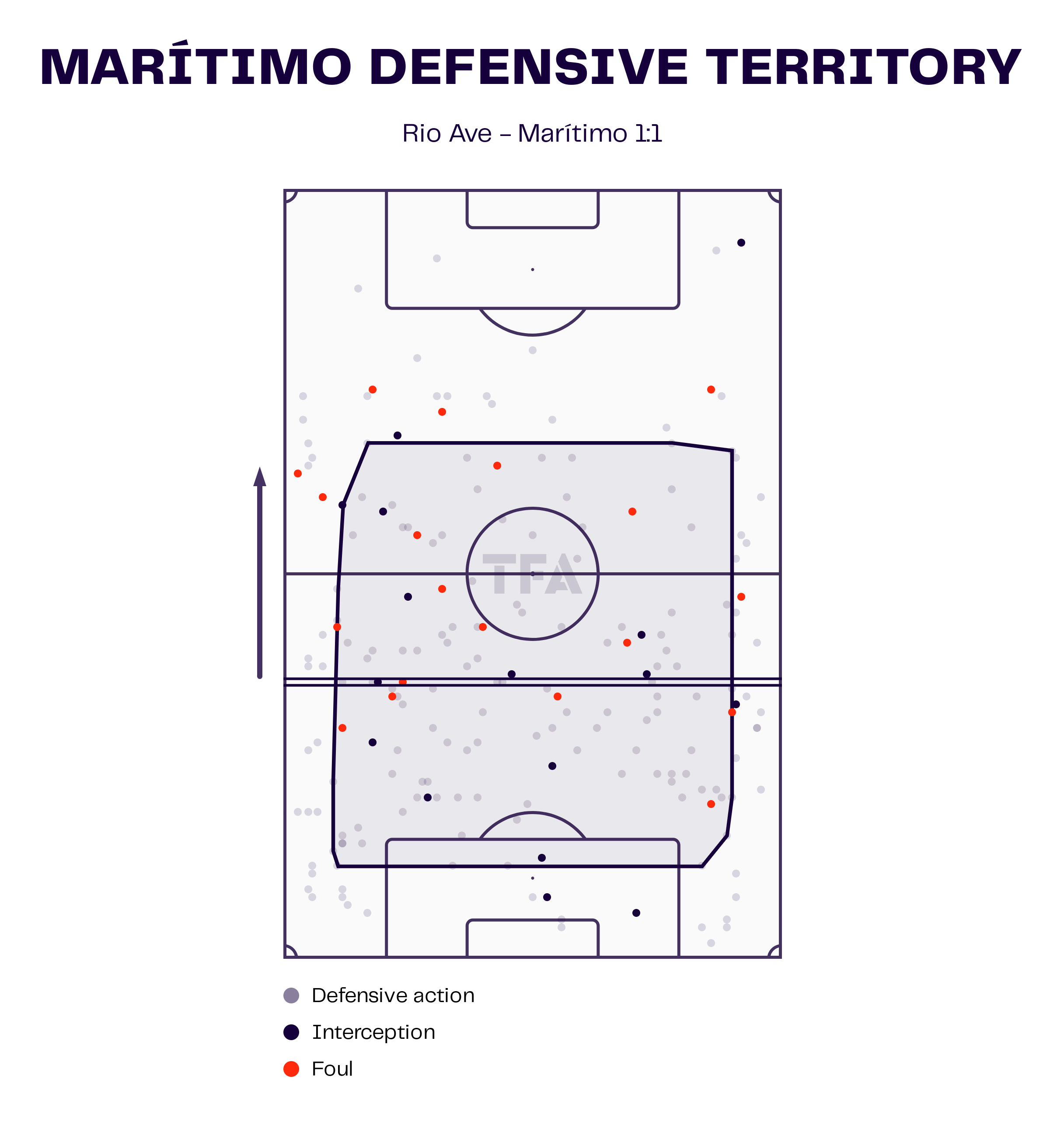 In another recent fixture, Maritimo visited Rio Ave and came away with a well-deserved 1-1 draw. The team made 40 interceptions in the 90 minutes played and had a success rate of 64.6% for defensive duels. They made three interceptions in the box, which proved crucial in limiting the home team to a single goal. In terms of aerial duels, they won 42.42% of those attempted and made 16 clearances. In their last six fixtures, Maritimo have registered good defensive numbers overall, scoring four goals and conceding four as well. Their most recent 3-0 defeat to Vizela is a setback, but they will seek inspiration from the other positive results to pull away from the drop zone.

Maritimo had one of the worst starts to the 2022–23 Liga Portugal season but have shown reasonable form in the last few games. They have plenty of room for improvement in attack and defence. The team will look to extend their recent positive run and shift the momentum in their favour to boost their chances of staying in Liga Portugal for another season.