C.S. Maritimo is a Liga Portugal club that is usually in and around the middle half of the table. In its recent history, the club has also competed in European club competitions such as the UEFA Europa League. Last season, Maritimo finished 10th in the league with 38 points from 34 matches (9 wins, 11 draws, and 14 losses). However, things have taken a far worse turn for them in Liga Portugal, as they find themselves in the relegation zone.

Os Verde-Rubros are currently second from bottom in the 17th spot in the Liga Portugal 2022–23 table. They have only managed six points from 13 matches, with a solo win, three draws, and nine losses. The team has faced some injury concerns within their squad and has also experienced managerial turmoil, having swapped two managers already this season. Maritimo are five points from safety, with the gap constantly growing between them and the teams above. Let’s take a look at some stats that reflect Maritimo’s poor performances in Liga Portugal 2022/23. 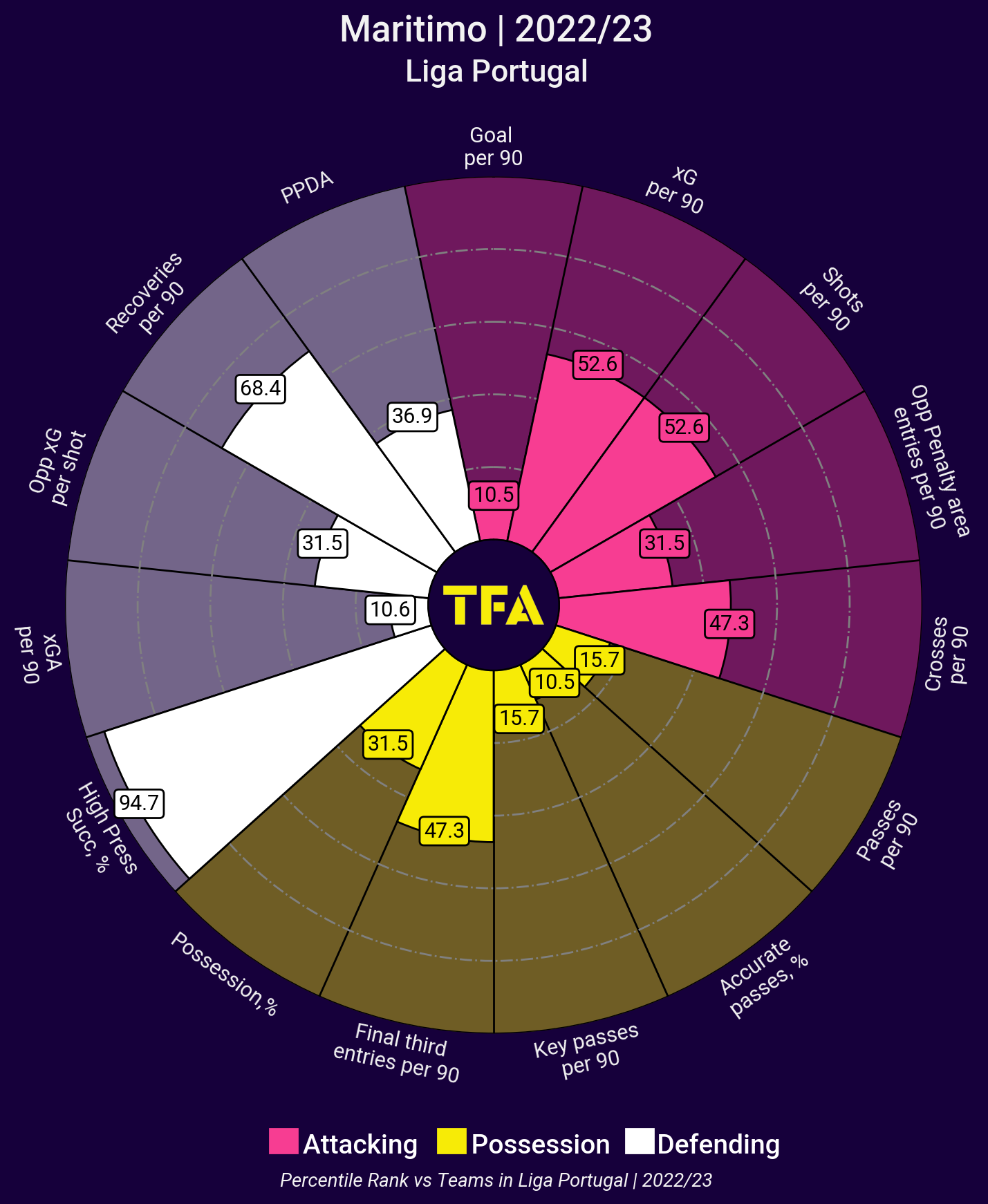 Maritimo opened the season in horrible fashion with eight consecutive defeats. However, their form has shown some improvement with three draws, a win, and a loss in their last five matches. The viz above shows the percentile rank of the team’s stats in comparison to other teams in the league. It can be observed that the team is struggling massively in attack, defence, and the possession department as well. They possess a very low rank with respect to goals, opposition penalty area entries, various types of passes, and the expected goal-against tally. While they seem to be doing well in terms of recoveries and a high pressing success rate, their overall stats have been very underwhelming. 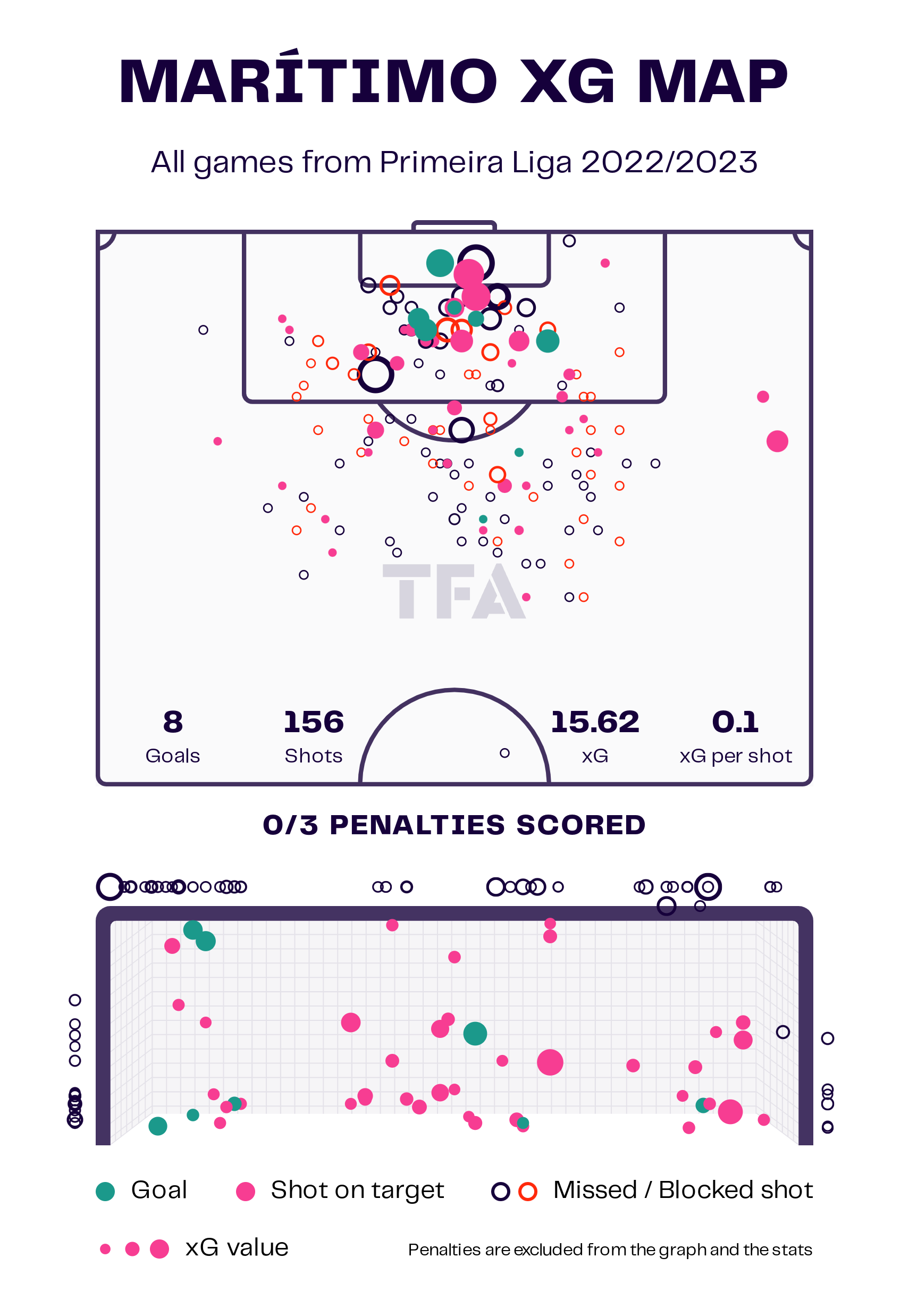 Maritimo have scored the second-lowest number of goals (eight) in Liga Portugal 2022/23. The team is massively underperforming in terms of xG too. Their average of 0.67 goals per match is much lower than their xG of 1.57 per match. They take 12 shots per match, with 32.5% of them landing on target. The viz above shows the team’s shot map from this season.

We can see that many of their shots from the penalty area have missed the target or been blocked. They have also tried their luck from a distance but without much consequence. The numbers reflect their lack of quality in front of the goal and their inability to finish their chances. 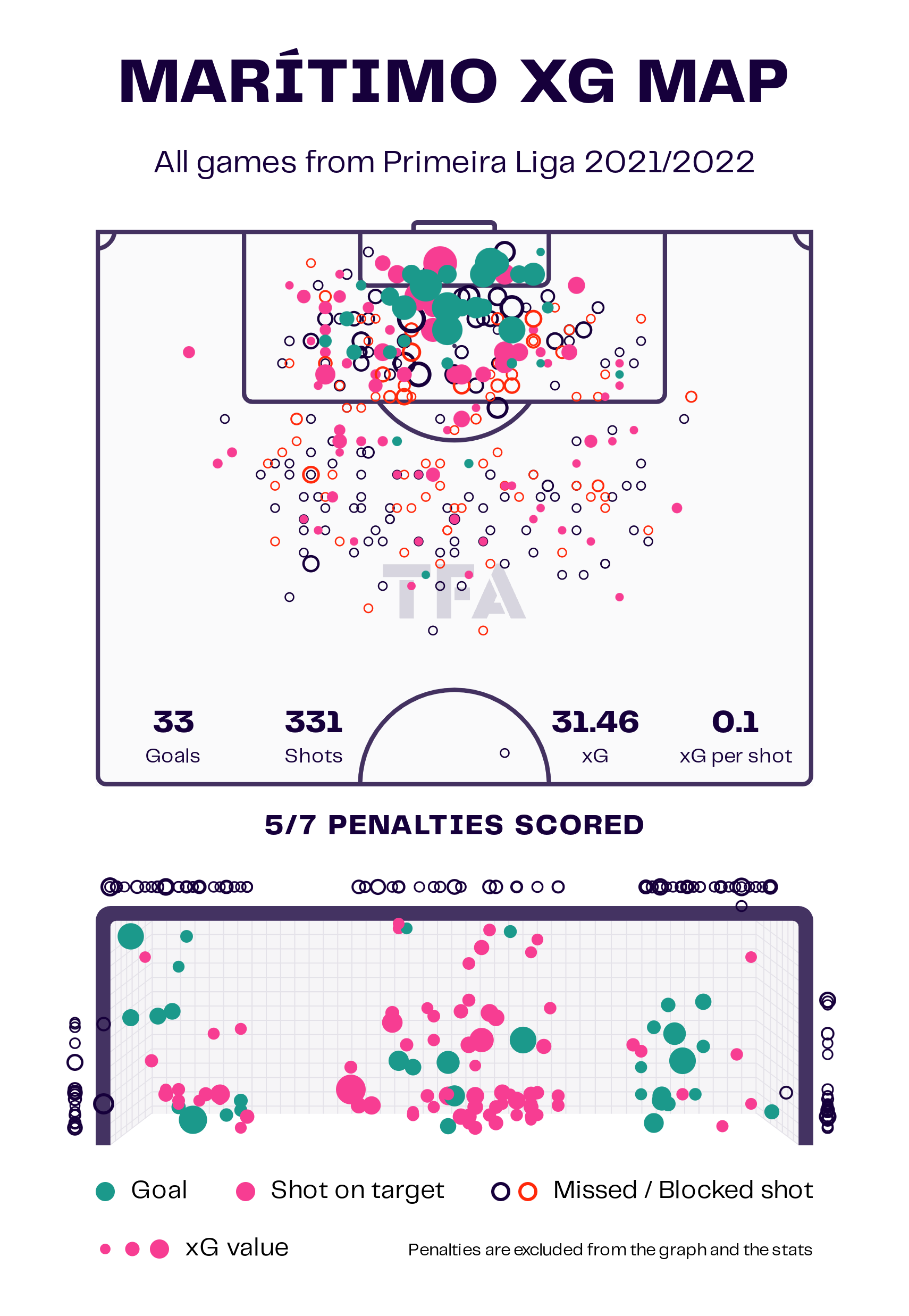 When compared to the 2021/22 season, Maritimo scored 39 goals with an xG tally of 35.1. They were scoring at a rate of 1.15 goals per match and taking 10.5 shots per match, with a slightly higher accuracy rate of around 34%. While these weren’t the best numbers either, the team’s offensive output has significantly worsened this season. 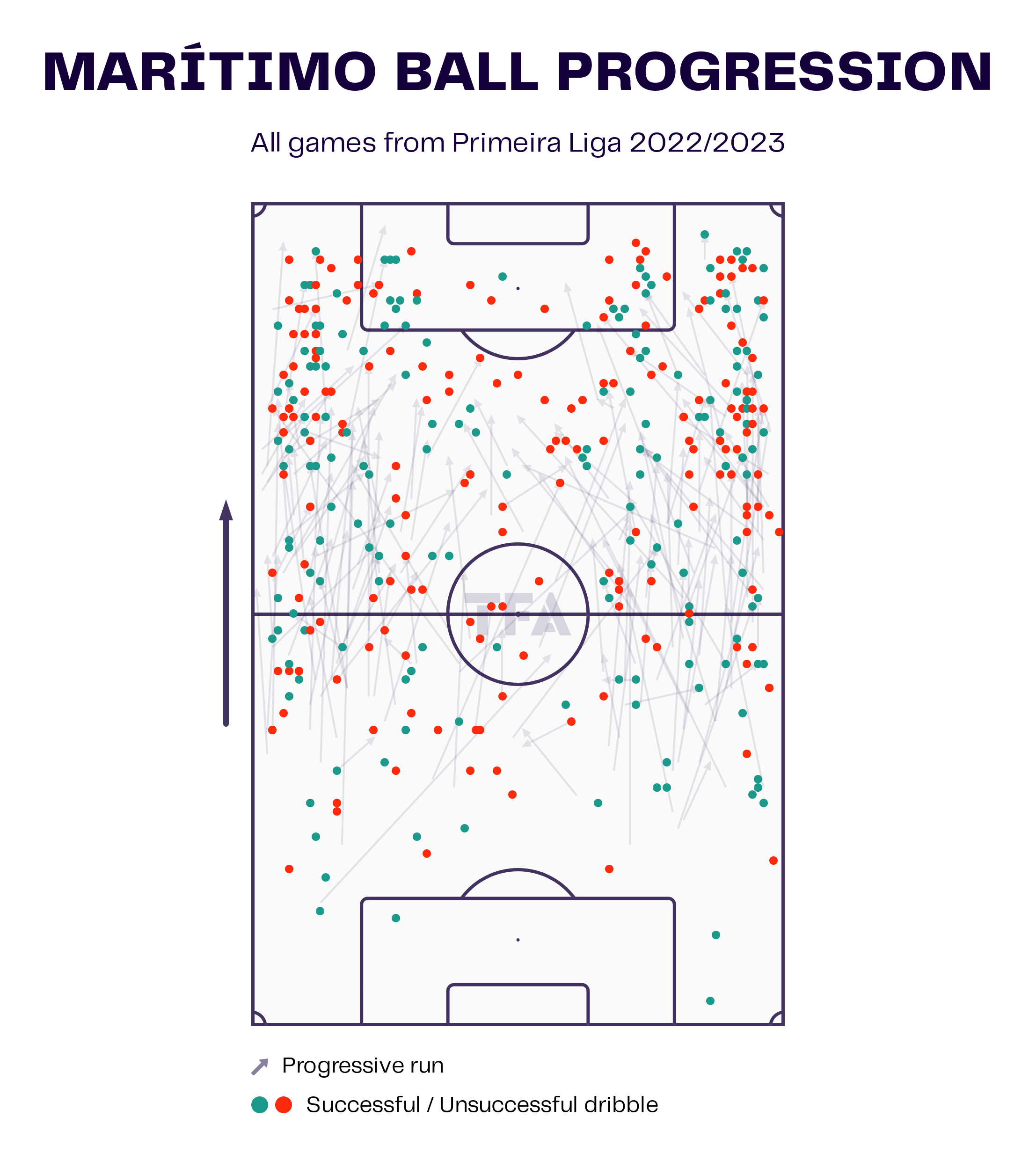 The above viz represents Maritimo’s overall ball progression in Liga Portugal 2022/23. There has been a cluster of play on both flanks and a lot of attempts at dribbles and progressive runs from the wide positions. However, there is also a scarcity of attacking intent in the central areas. Maritimo only makes 16 attacks through central zones per match, the second-lowest in the league. Additionally, they make 34 entries into the final third and 11 entries into the opposition box per match. Again, these figures are quite low in comparison to other teams. 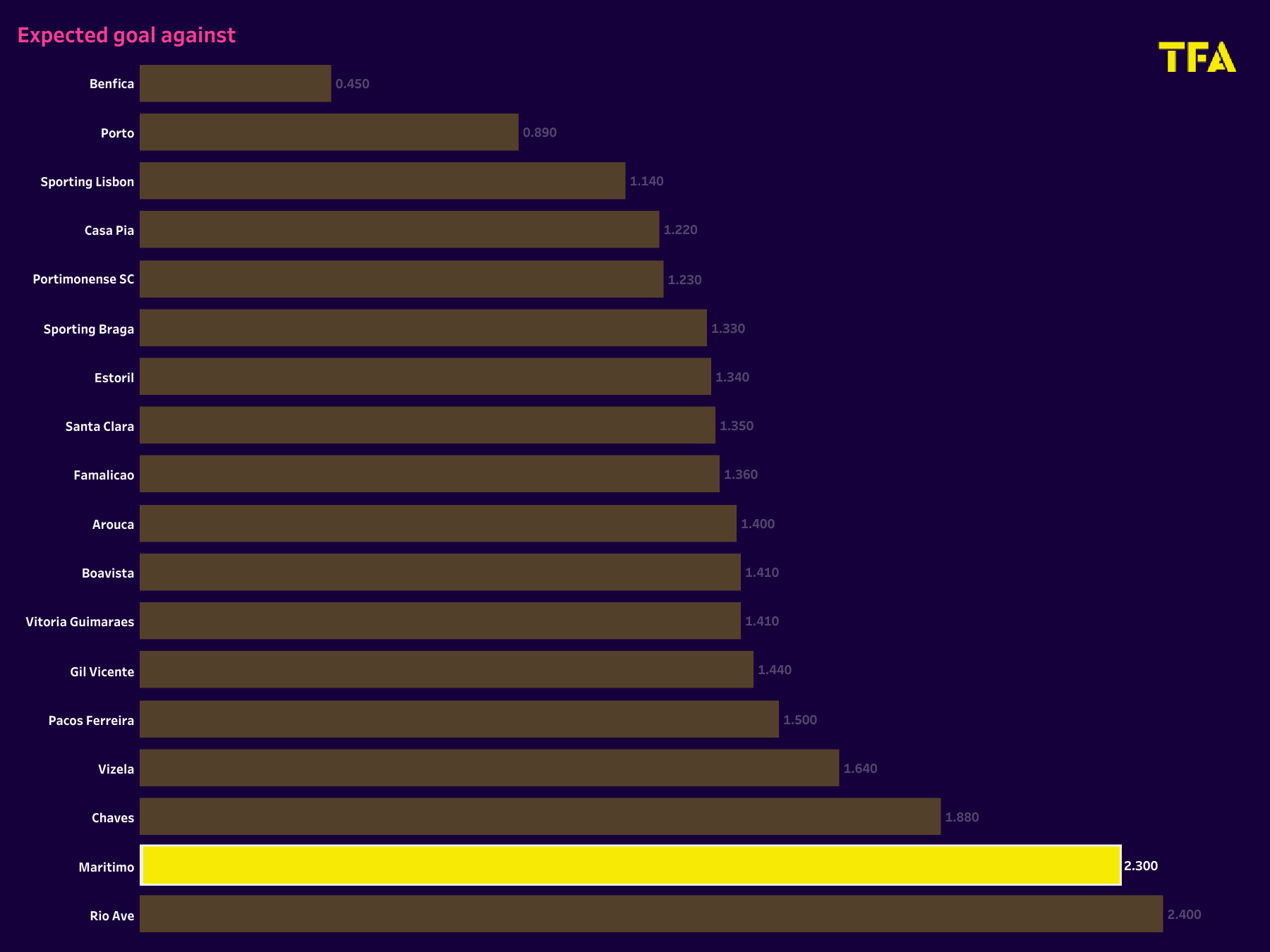 Maritimo have one of the worst expected goal-against (xGA) tally in the league and have conceded the most goals (27) with a goal difference of -19. They tend to concede slightly more than two goals per match on average. They definitely need to fortify defensively and let in fewer goals to have any chance of survival in the top flight. 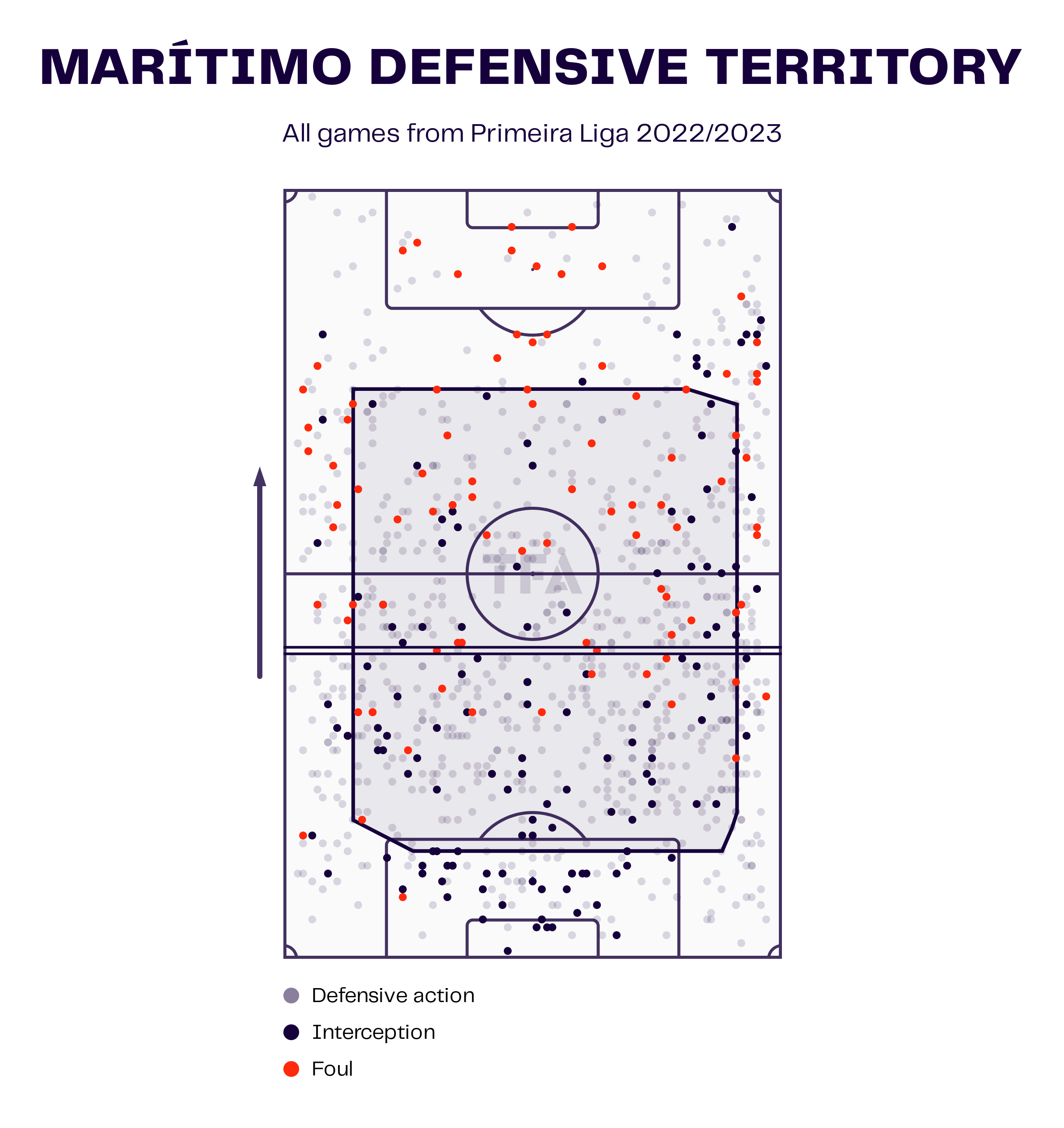 The viz above illustrates Maritimo’s defensive territory in Liga Portugal 2022/23. We can see the team making lots of defensive actions in the defensive third and even inside their penalty box. They make only eight recoveries in the opposition half per match, along with 49 interceptions. The team wins 55% of their defensive duels—almost on par with the other teams in the league. Furthermore, they win 46% of their total aerial duels contested, which is among the lowest percentages. 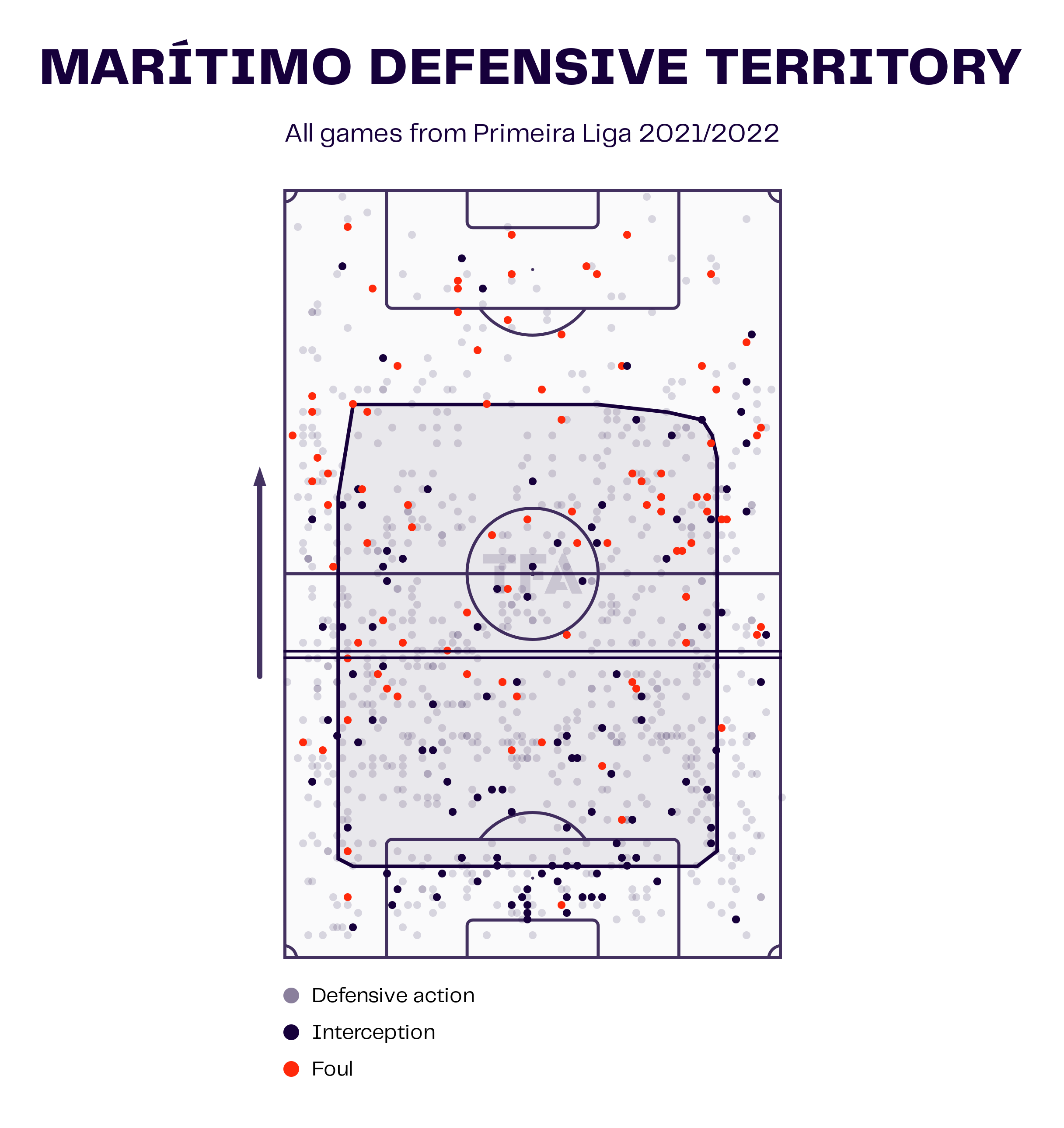 In comparison to the 2021/22 season, Maritimo conceded 44 goals throughout their campaign with a goal difference of minus five. The team let in 1.3 goals per match on average, a figure significantly lower than their current one. While there isn’t much difference in the team’s defensive territory this season, their defensive displays have become far more inconsistent.

Os Verde-Rubros had one of the worst starts to the 2022–23 Liga Portugal season but have shown a little bit of form in the last few games. They have much room for improvement in all three departments—attack, defence, and possession. They will need to build momentum and consistency to survive the relegation battle in the Portuguese top flight.