Marcus Edwards is one of the most promising players in Liga Portugal. Coming through the youth ranks of Tottenham Hotspur, he moved to Vitoria de Guimaraes in 2019 and took his time to develop and gain prominence. The Englishman moved from Guimaraes to Lisbon in early 2022, signing for Sporting CP and scoring a dramatic goal against his former club.

This season, he has done the same thing again, scoring against Vitoria as well as against Tottenham Hotspur in the UEFA Champions League. Edwards has settled in seamlessly in Sporting’s attack and is enjoying his first full season under Ruben Amorim. Let’s now look at some stats to understand how Marcus Edwards has developed into a crucial player for Sporting Lisbon. 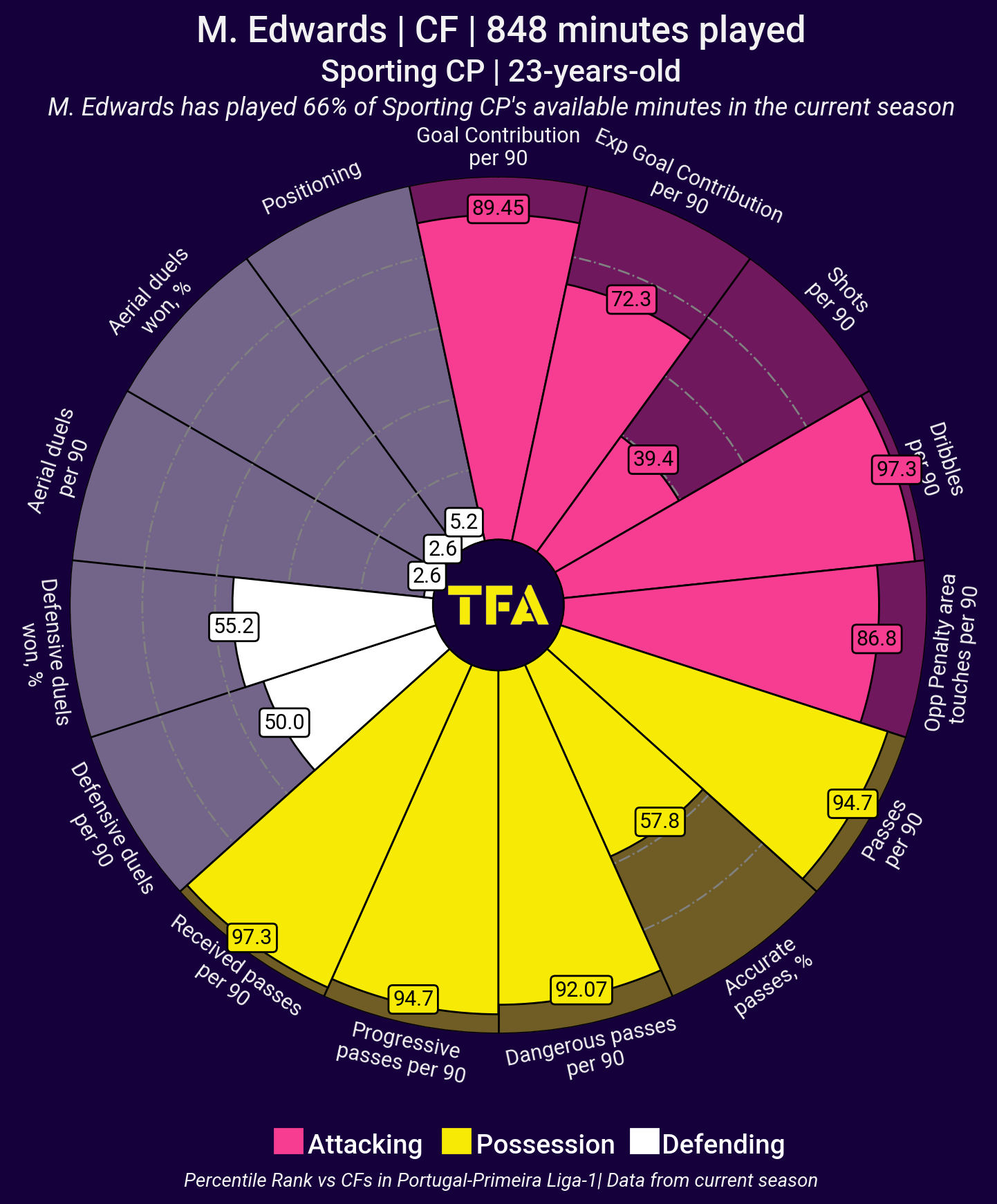 Marcus Edwards has played 13 matches for Sporting this season, starting eight and coming on as a substitute in five matches. While the Englishman averages 60 minutes per game, he has five goals and three assists in the league. The above visual shows the player’s percentile rank compared to other centre-forwards in Liga Portugal.

We can observe that he possesses excellent stats in the attacking and possession departments. He ranks in the top 97.3 percentile for dribbles, the 89.45 percentile for goal contributions, and the 86.8 percentile for penalty area touches. Meanwhile, his passing records are also fantastic, being included in the high 90 percentiles for progressive, dangerous, and received passes. An additional area where the 24-year-old does decently is in defensive duels. 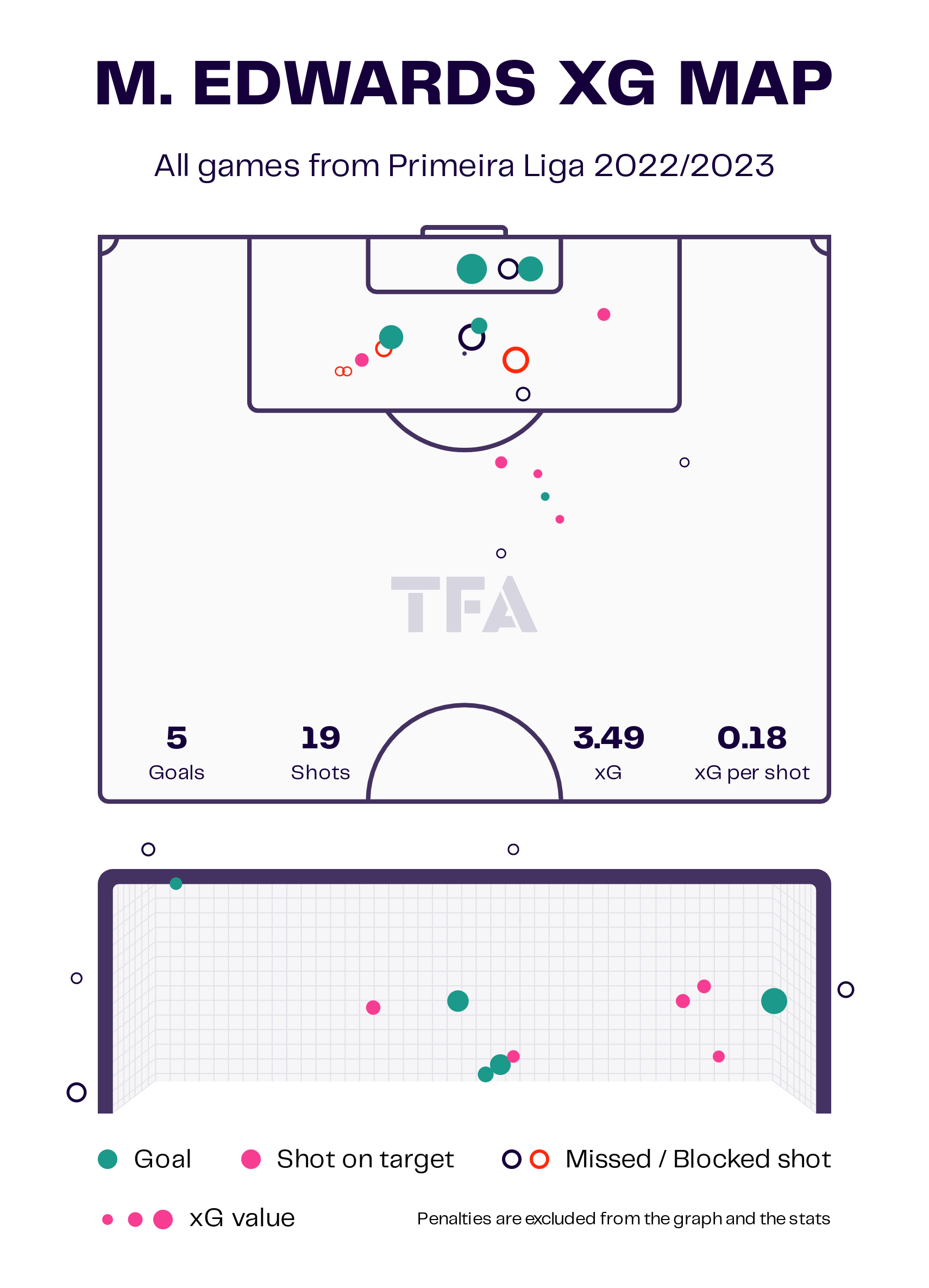 With five goals and three assists, Edwards has the second-highest goal contribution for Sporting in Liga Portugal 2022–23. The viz above depicts the player’s shot map from this season. He has attempted 19 shots, with the majority of them coming from inside the penalty box. While two of his goals have come from inside the 6-yard box, the other has come from outside the penalty box. He takes an average of 2.02 shots per game with an accuracy rate of 52.6%. Interestingly, he is averaging 0.53 goals per game, which exceeds his average xG rate of 0.37. 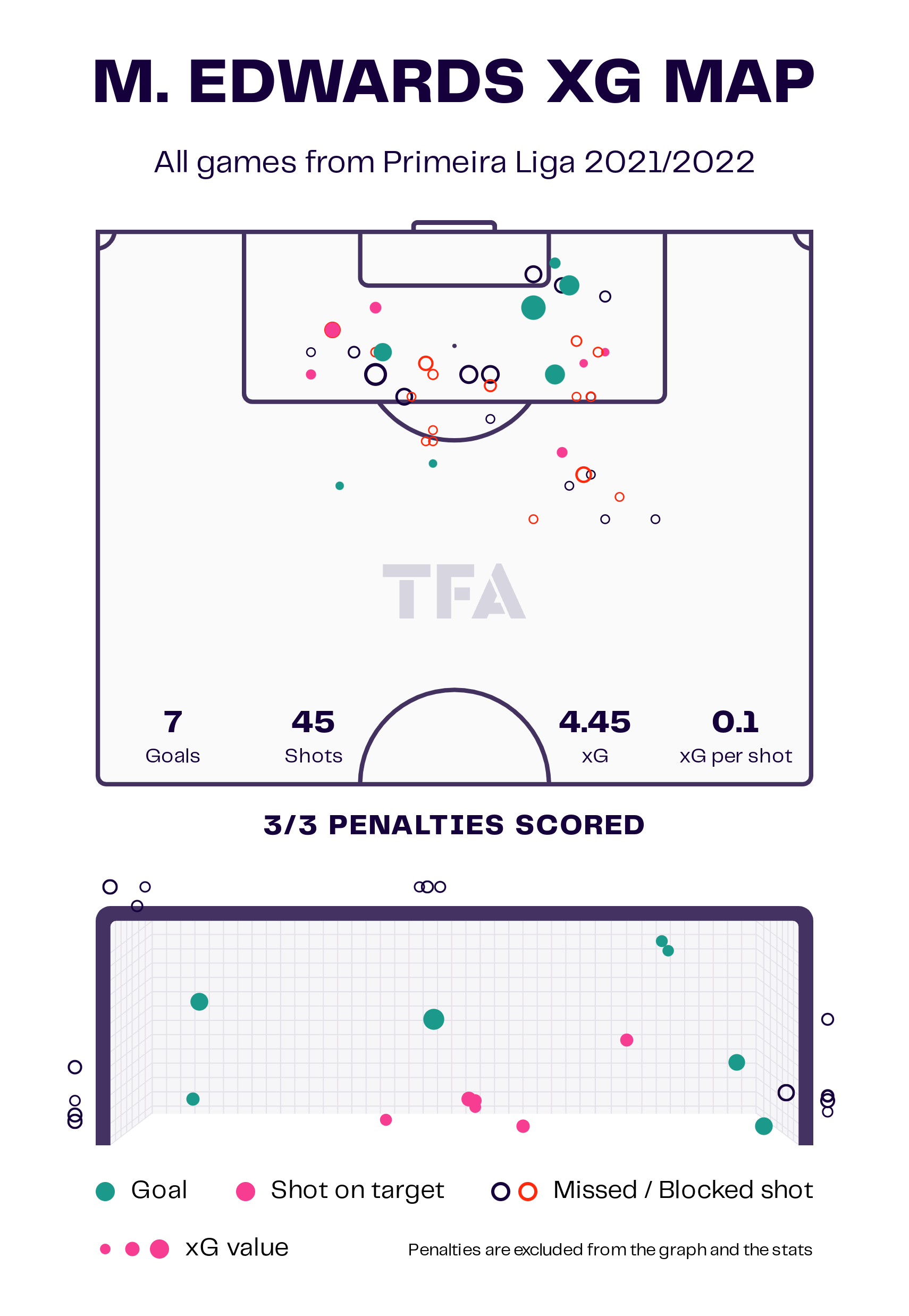 When compared to last season, Edwards accumulated a total of ten goals and four assists. He attempted 48 shots, averaging 2.18 shots per match with an inferior accuracy rate of 33.3%. He was scoring 0.45 goals per game with an average xG rate of 0.3. His attacking stats have improved this season, and he has already registered more than half of his goal contributions from last year.

Edwards’ stats with the ball 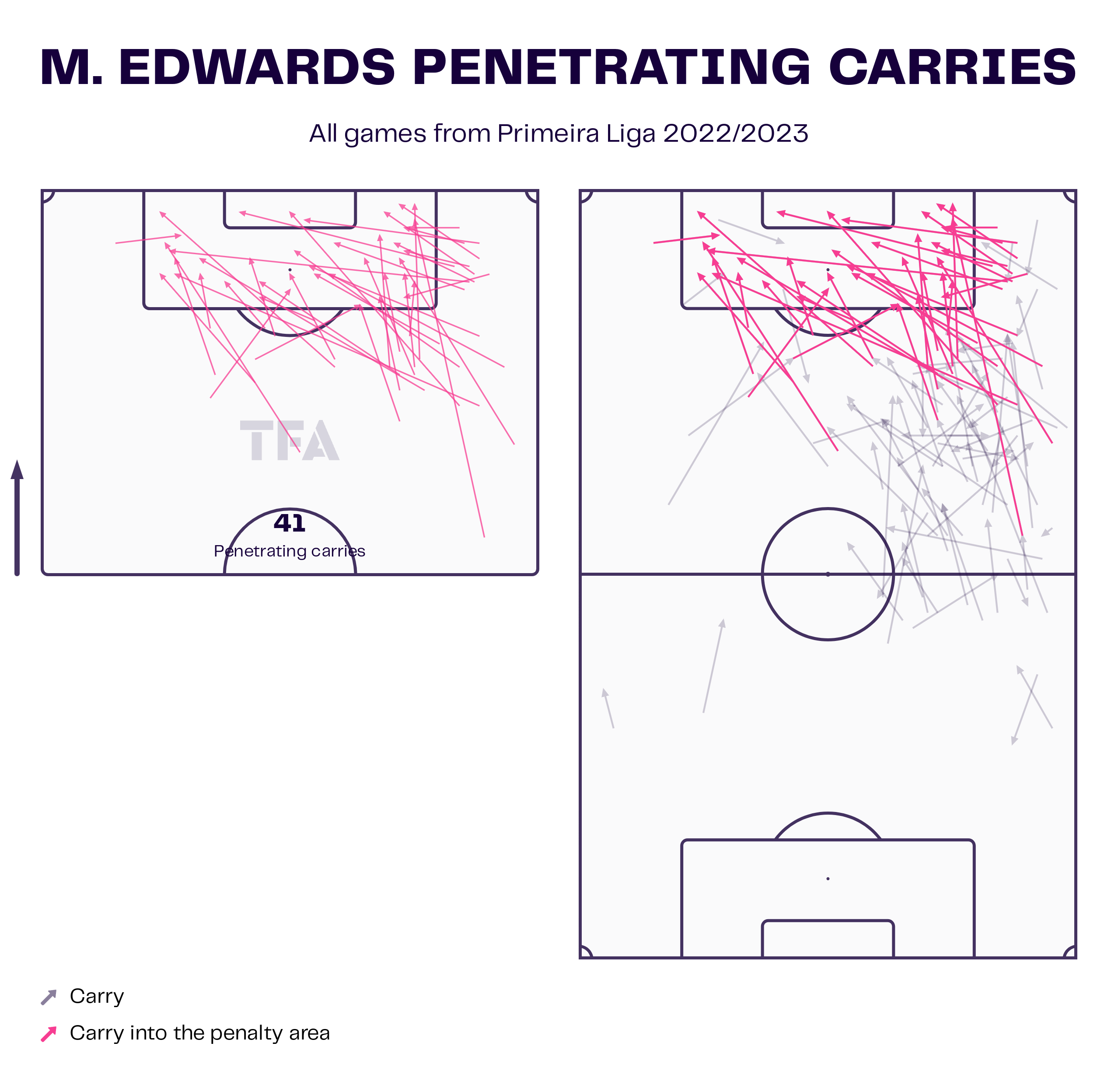 Dribbling is one of the main characteristics of the Englishman. He penetrates the opponent’s defensive lines using his pace and skips past players and challenges with ease. The above viz shows the penetrating carries made by Marcus Edwards this season. He likes to cut inside on his dominant left foot and play short passes or go for a goal attempt. 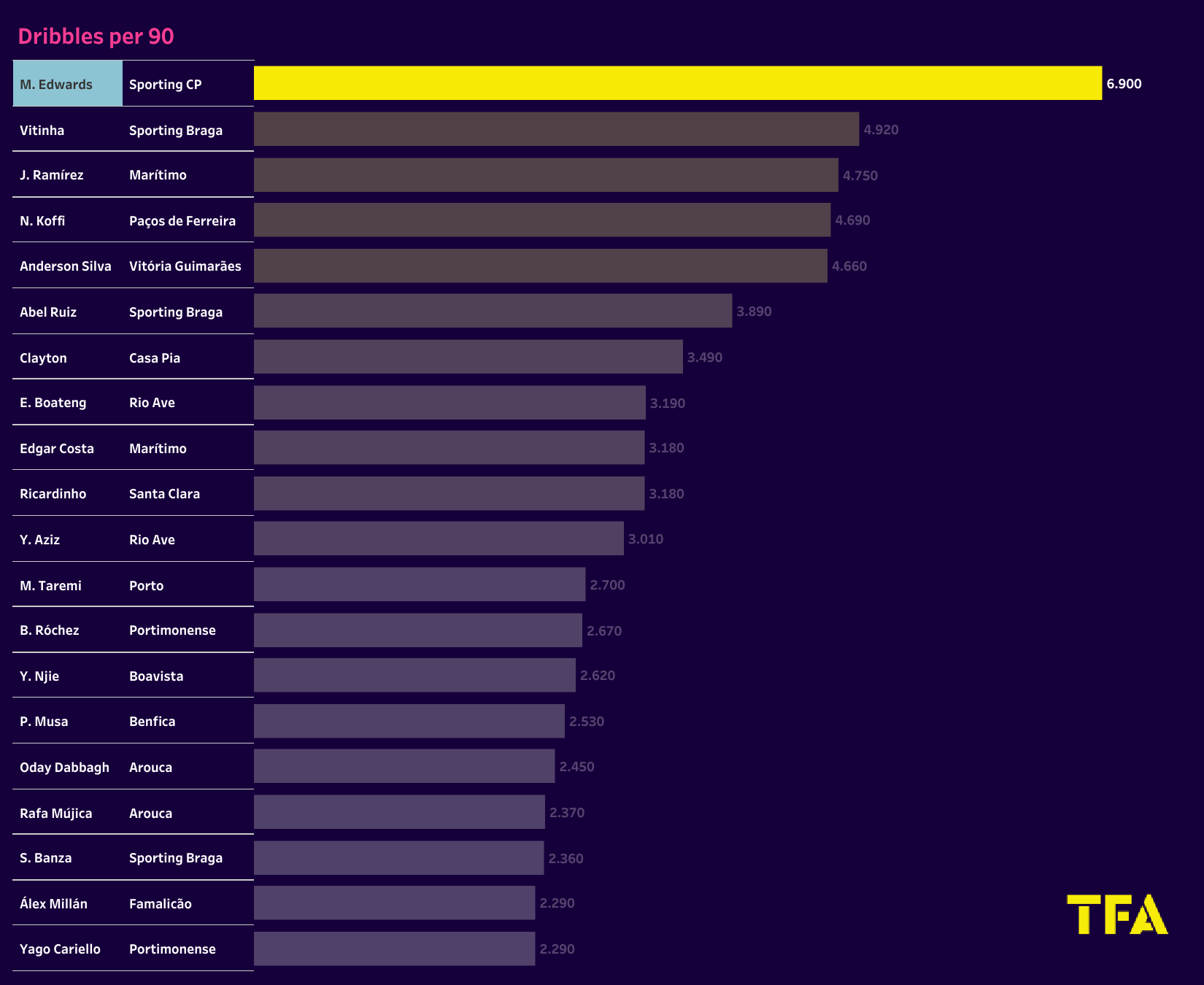 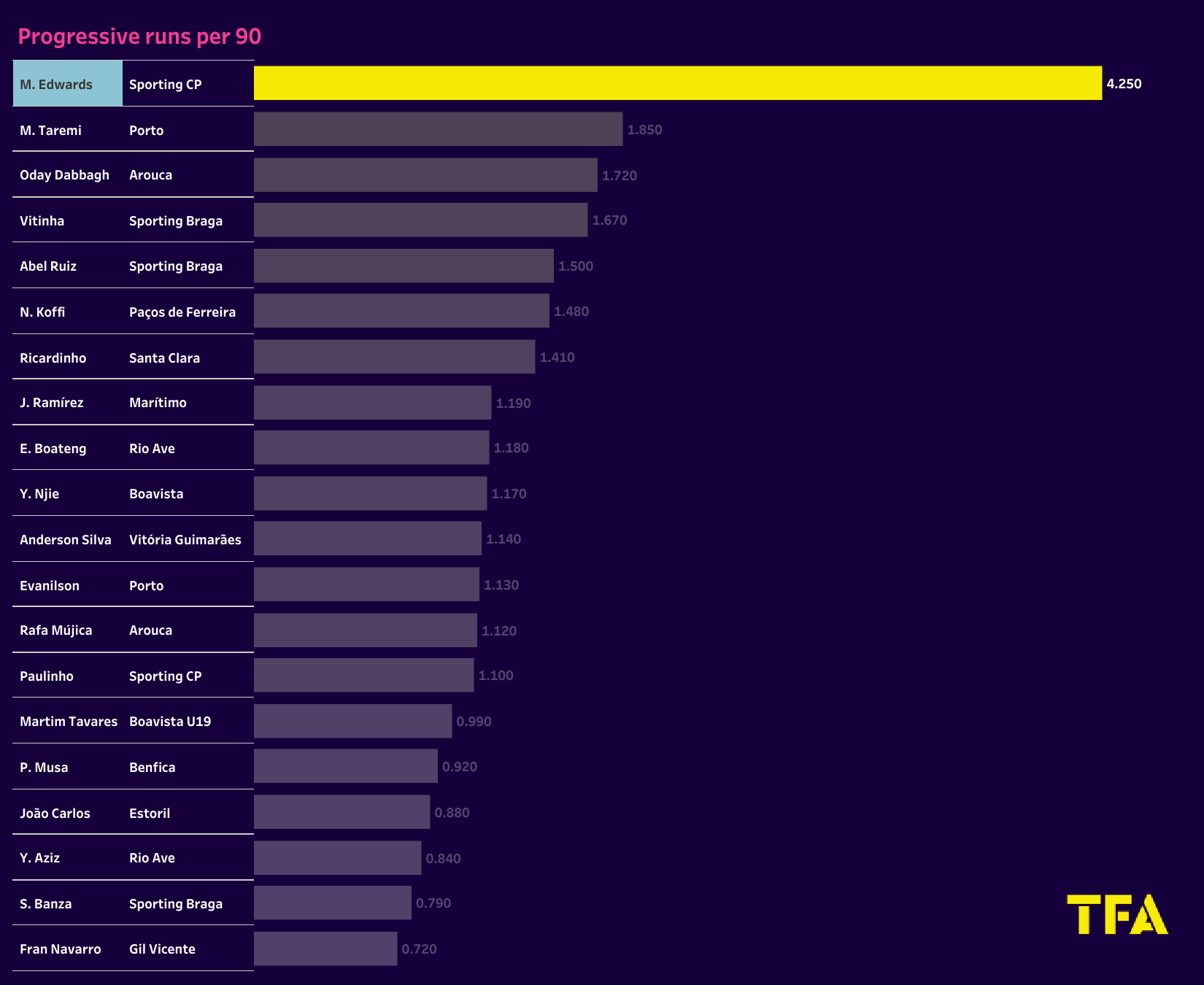 The 24-year-old attempts an astonishing 6.9 dribbles per match with a success rate of 53.8%. Moreover, he averages 2.55 passes to the final third per match and 2.87 passes to the opposition’s penalty area. Apart from dribbles and passes, he makes around 4.25 progressive runs per game, and this figure is miles ahead of the numbers registered by similar players.

Marcus Edwards usually plays as the right-wing forward, but he can also feature on the left flank or as a centre forward. He likes to drive at compact defences and uses his vision, positional awareness, and close control to break them down. Sometimes he gets into the box himself, and he also whips in a few crosses occasionally. 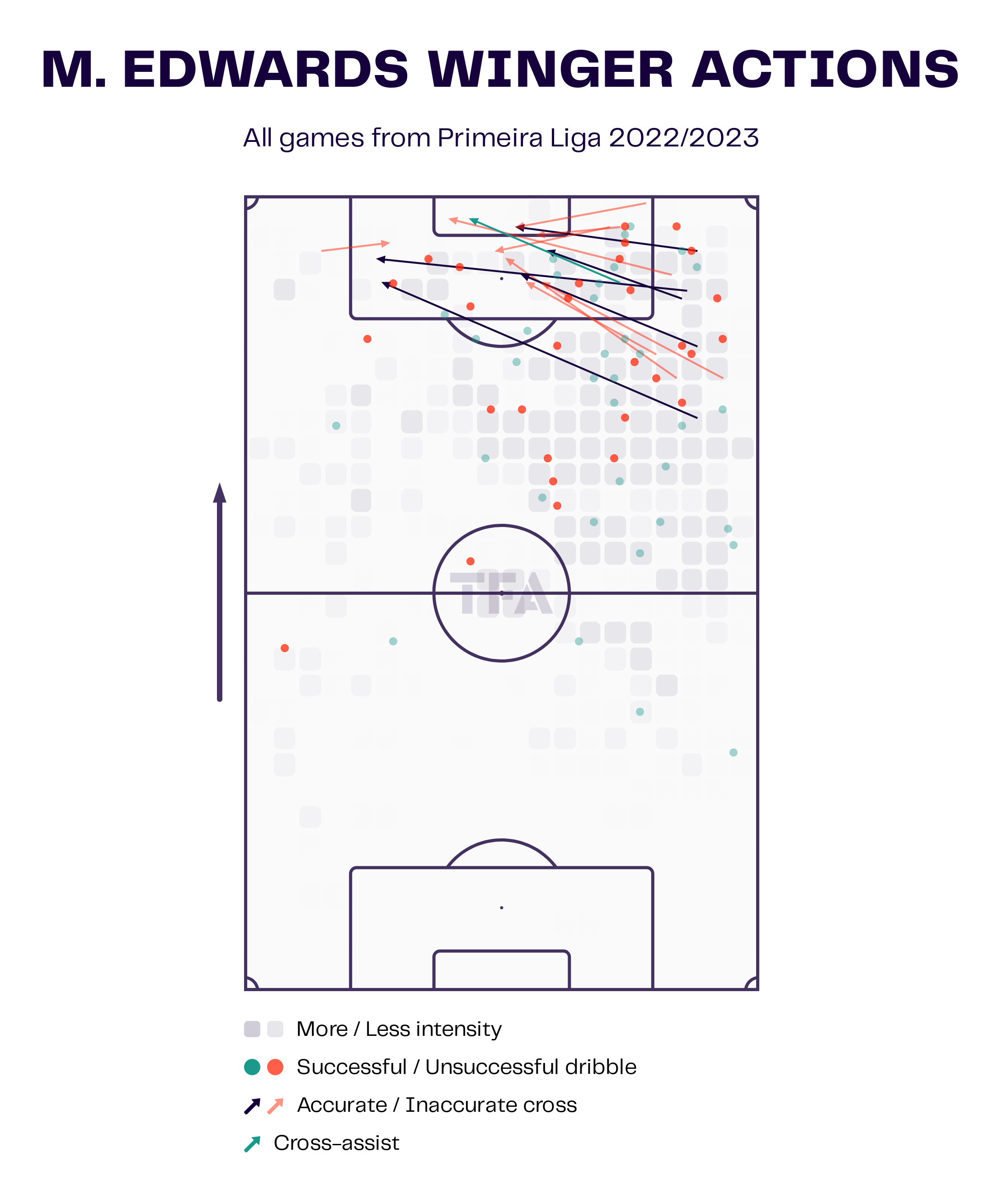 The attacker averages 4.78 touches in the penalty area and whips in around 1.8 crosses per match. The above visual shows the actions of Marcus Edwards as a winger. We can see how he dribbles in dangerous areas and plays crosses into the box, resulting in three assists and five goals this season.

Marcus Edwards is on course to better his goals-and-assists figures from previous seasons. He can prove a constant threat to opposing defences with his variety of attacking skill sets. With Sporting currently fourth in the league, they will be hoping for some special displays from their Englishman to propel them into the territory of title contenders.