Manuel Ugarte is among the latest names to emerge as a promising young talent in Liga Portugal in recent times. A product of the Uruguayan club Fenix’s youth system, he was quick to settle in the Portuguese top division after Famalicao signed him in 2020. After an impressive half-season, Sporting CP pounced on the opportunity to bring the young midfielder to Lisbon in the summer of 2021.

Initially signed as a backup, the 21-year-old quickly adapted to his new team and has slotted seamlessly into the crucial role at the heart of Ruben Amorim’s midfield. Tottenham Hotspur have expressed an interest in Ugarte following his impressive performances in Liga Portugal and the UEFA Champions League. Let’s now delve into some stats possessed by Manuel Ugarte for Sporting CP that has earned him prominence as one of Liga Portugal’s brightest talents. 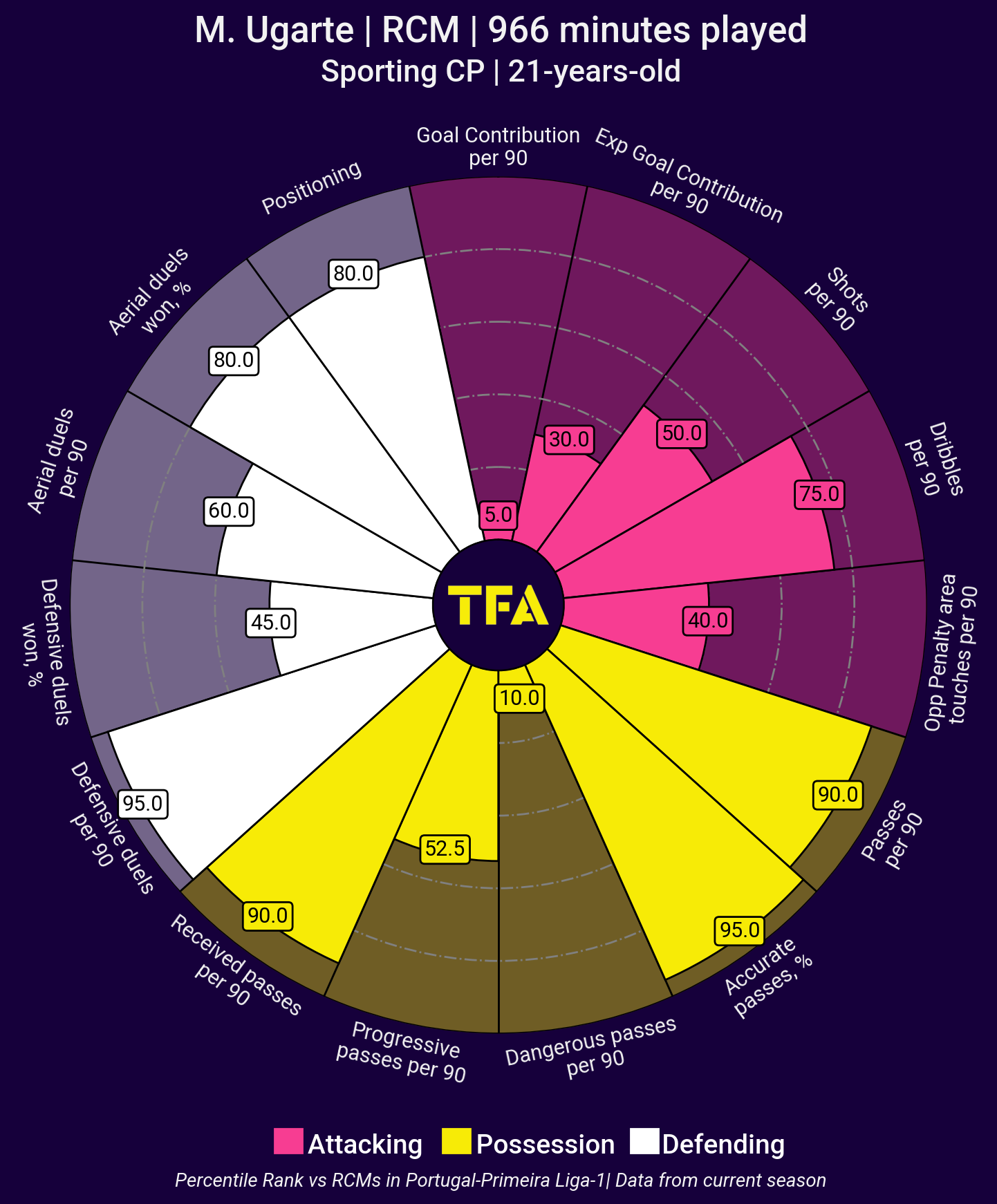 Manuel Ugarte has made 13 league appearances for Sporting in Liga Portugal 2022/23, of which he has started in ten. Despite his young age, he is considered a versatile midfielder with greater defensive proficiency and can play various roles in the midfield. The viz above shows the percentile rank of the player’s stats in comparison to other players in a similar position. We can observe that Ugarte ranks very highly under indicators like accurate passes, received passes, and defensive duels. He also enjoys a good ranking in indicators like aerial duels, positioning, and dribbles. 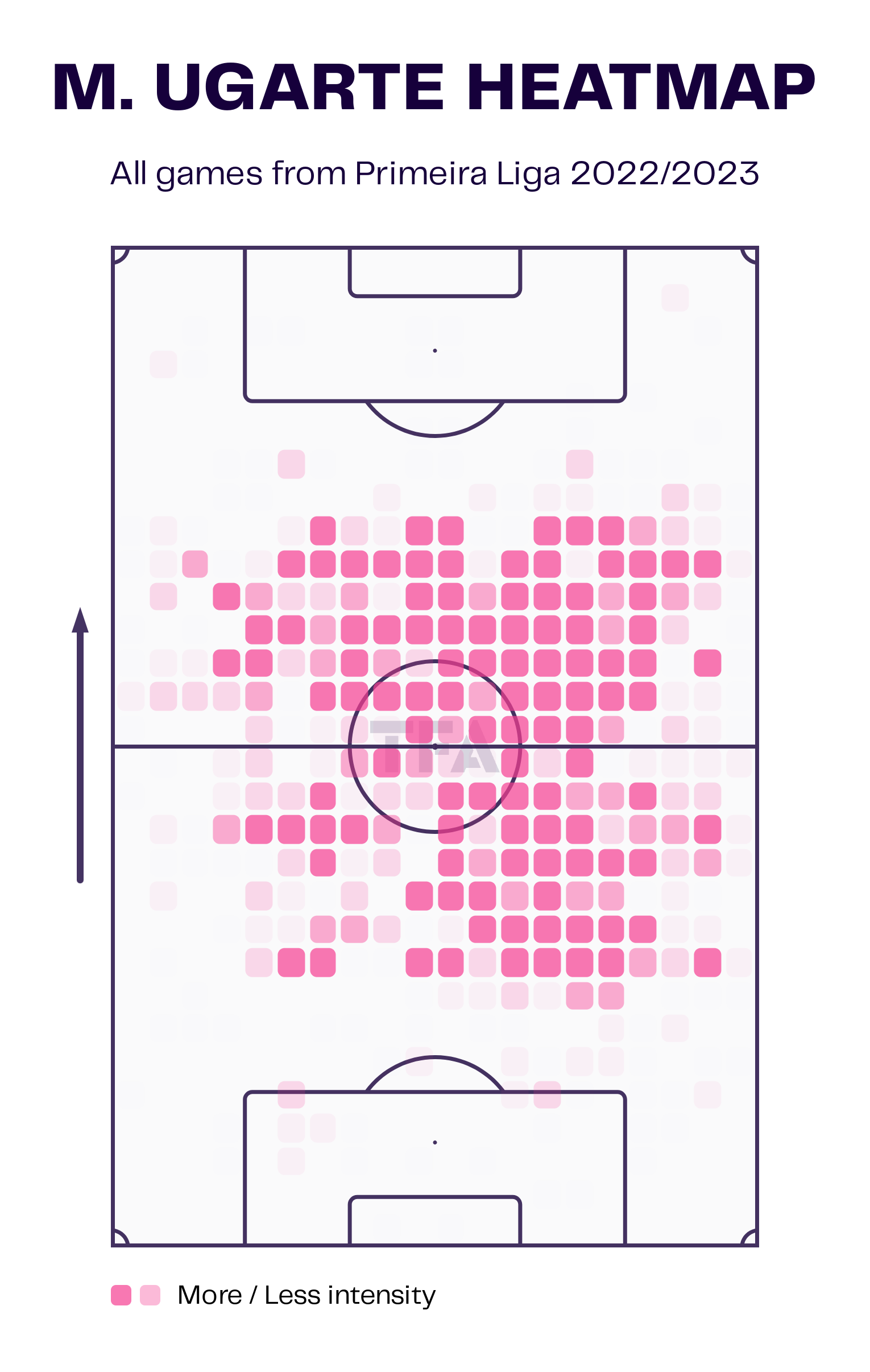 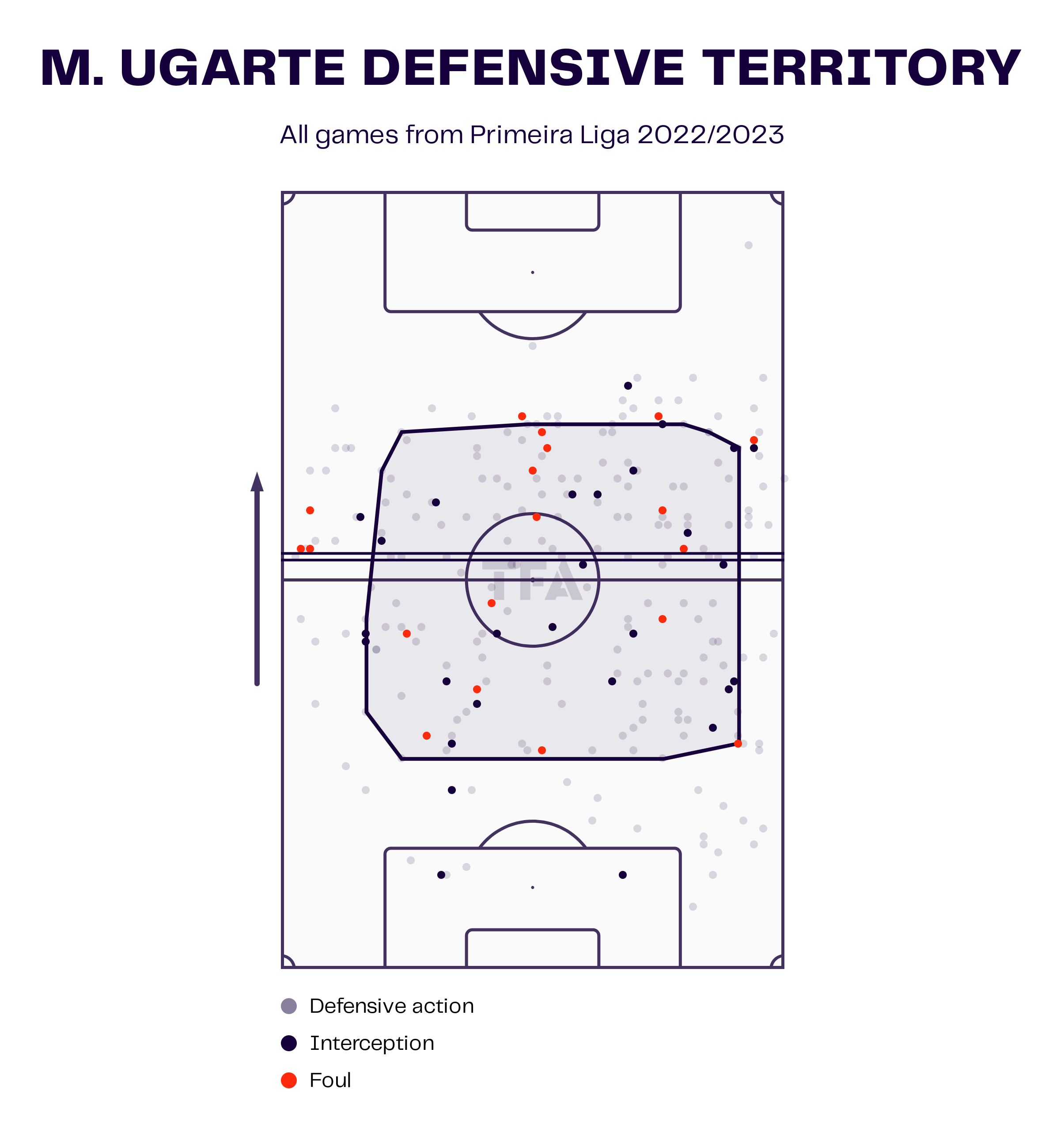 A right-footed player, Ugarte usually plays at the base of the central midfield as a holding midfielder. The viz above shows the player’s average defensive territory and the type of defensive actions performed by him. Ugarte positions himself near the half-line and commits a good amount of his defensive actions in his own half. However, he has also shown the desire to assert his authority in the opposition half, as evident from the fouls and interceptions committed there. 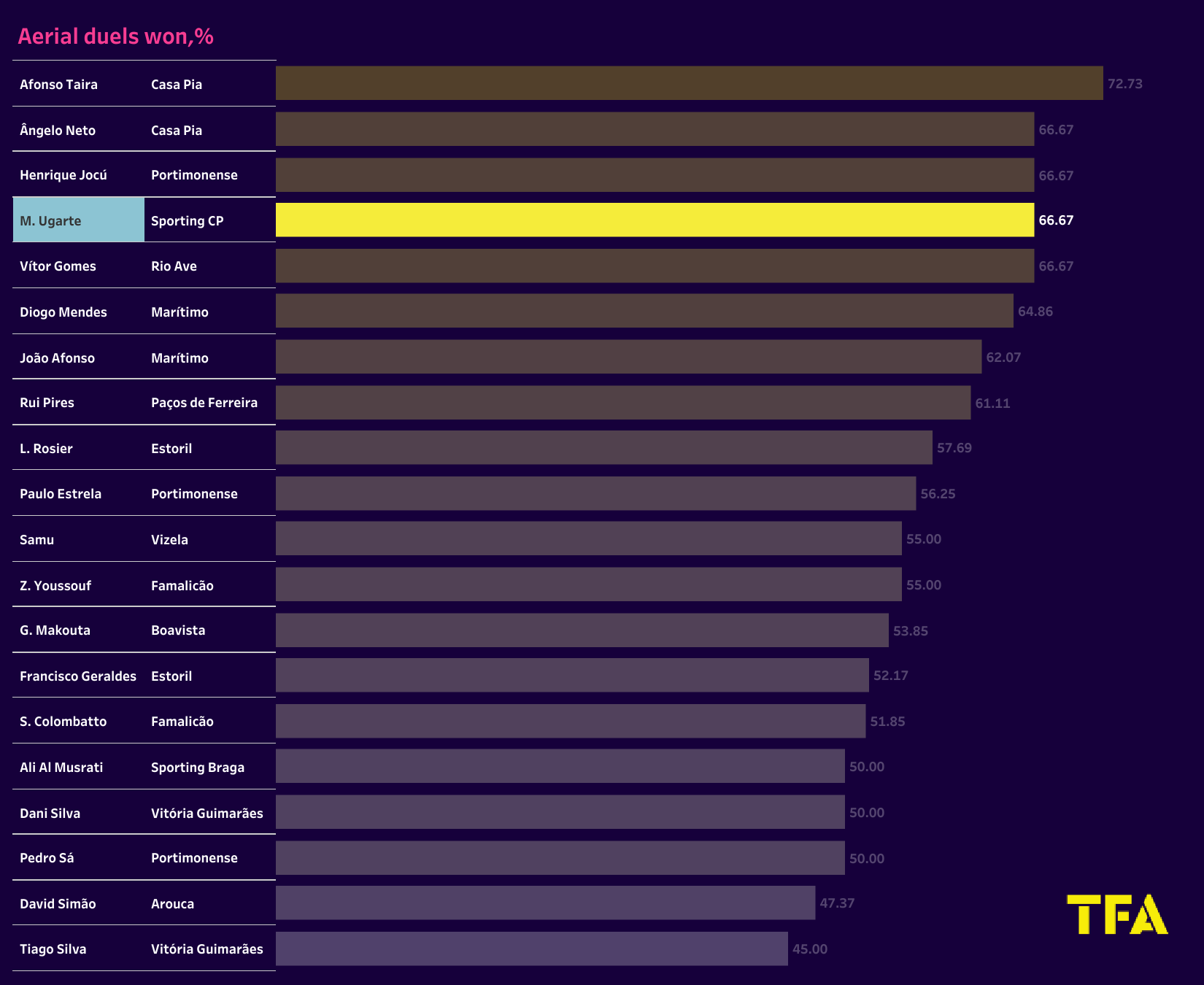 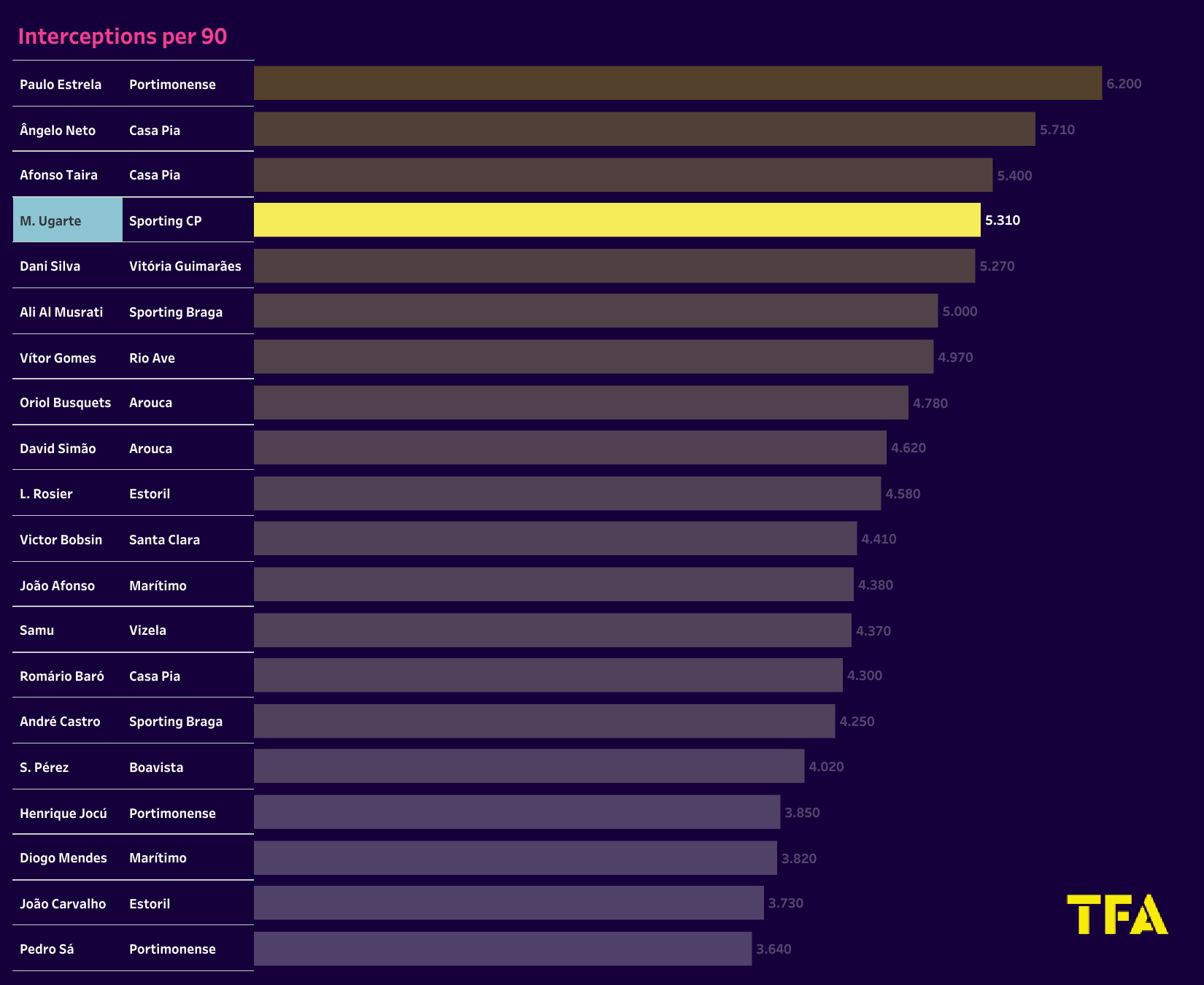 Ugarte performs his ball-winning duties in midfield sincerely and is known for relishing a duel. He contests 11.65 defensive duels per match and wins 57.6% of them. As for aerial duels, he contests 1.7 of these per match and wins an impressive 66.7% of them. The 21-year-old also makes 11.75 possession recoveries in the opponent’s half and 5.31 interceptions per match. All of these stats outperform the majority of other players in a similar position in Liga Portugal. This goes to show that Ugarte’s prime strengths lie in his defensive characteristics. 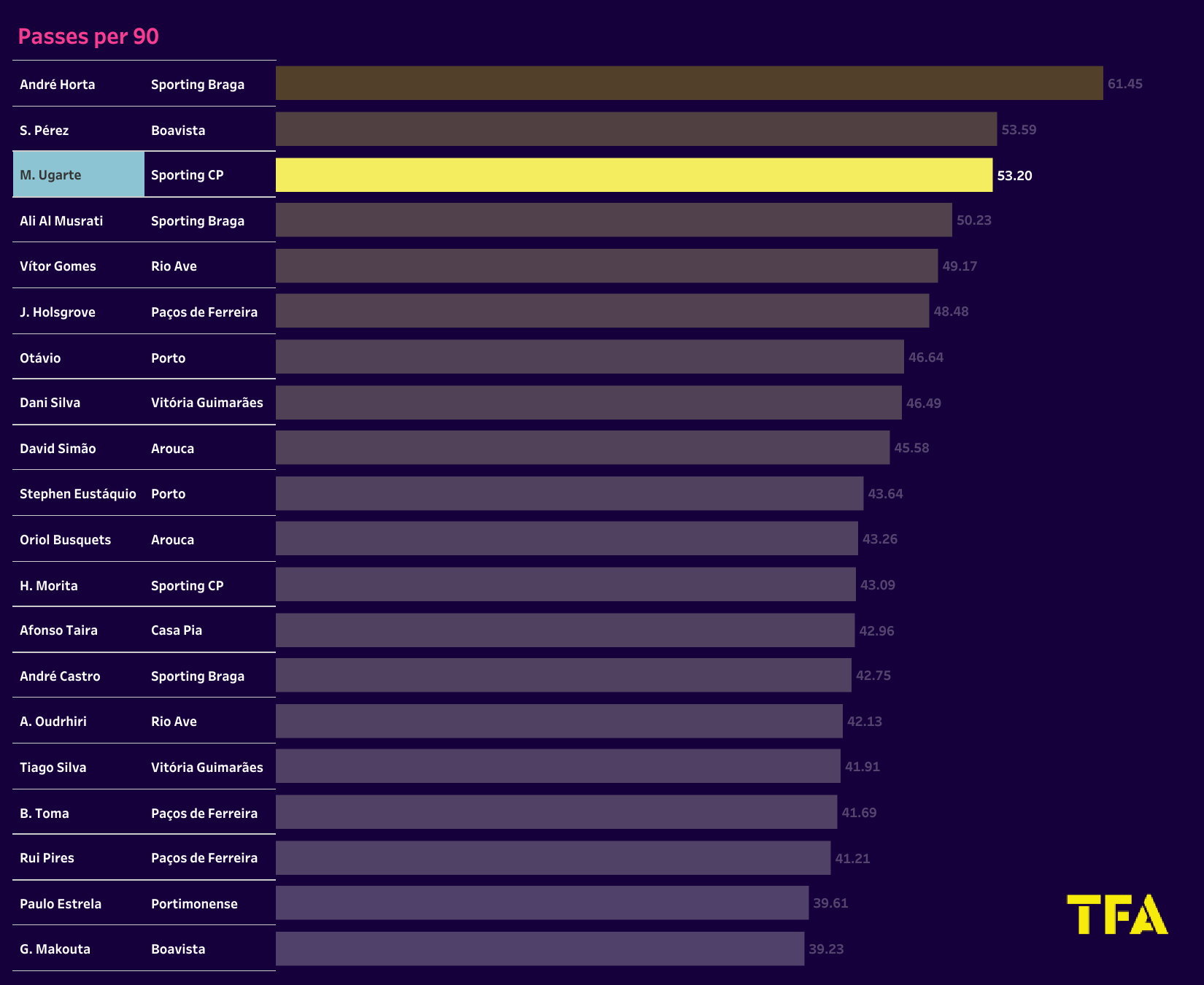 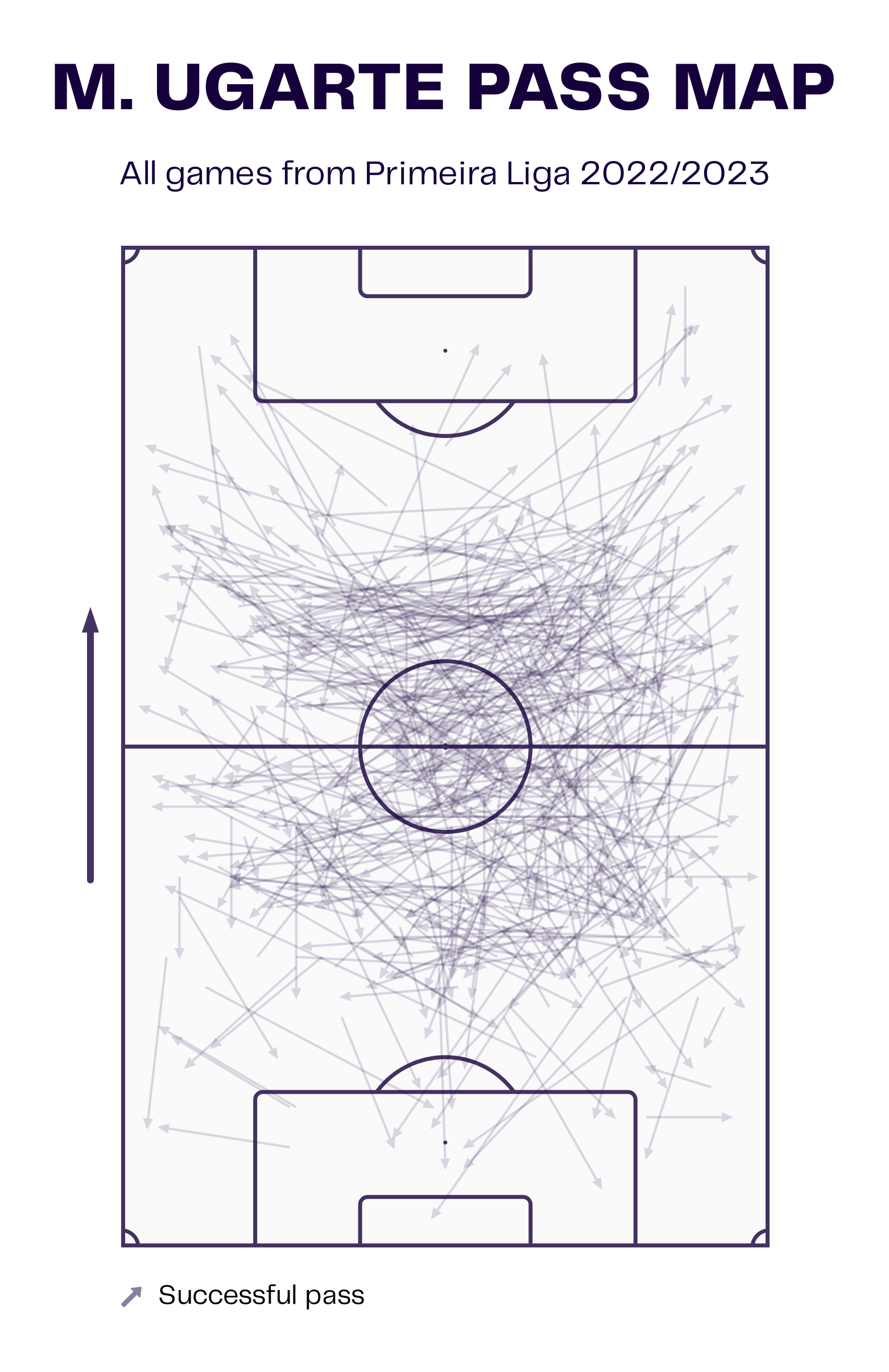 In addition to his defensive prowess, Manuel Ugarte also possesses the ability to circulate the ball around while in possession. He has a range of passing options that help him retain control of the ball and set the tempo of the game from midfield. The big cluster of passes in central areas in the viz above illustrates Ugarte’s crucial role in keeping possession flowing for his team. The player averages 53.2 passes per match with an incredible accuracy of 92.3%, among the highest in the league. He also receives 38.6 passes on average from his teammates and makes 6.24 passes into the final third per match. 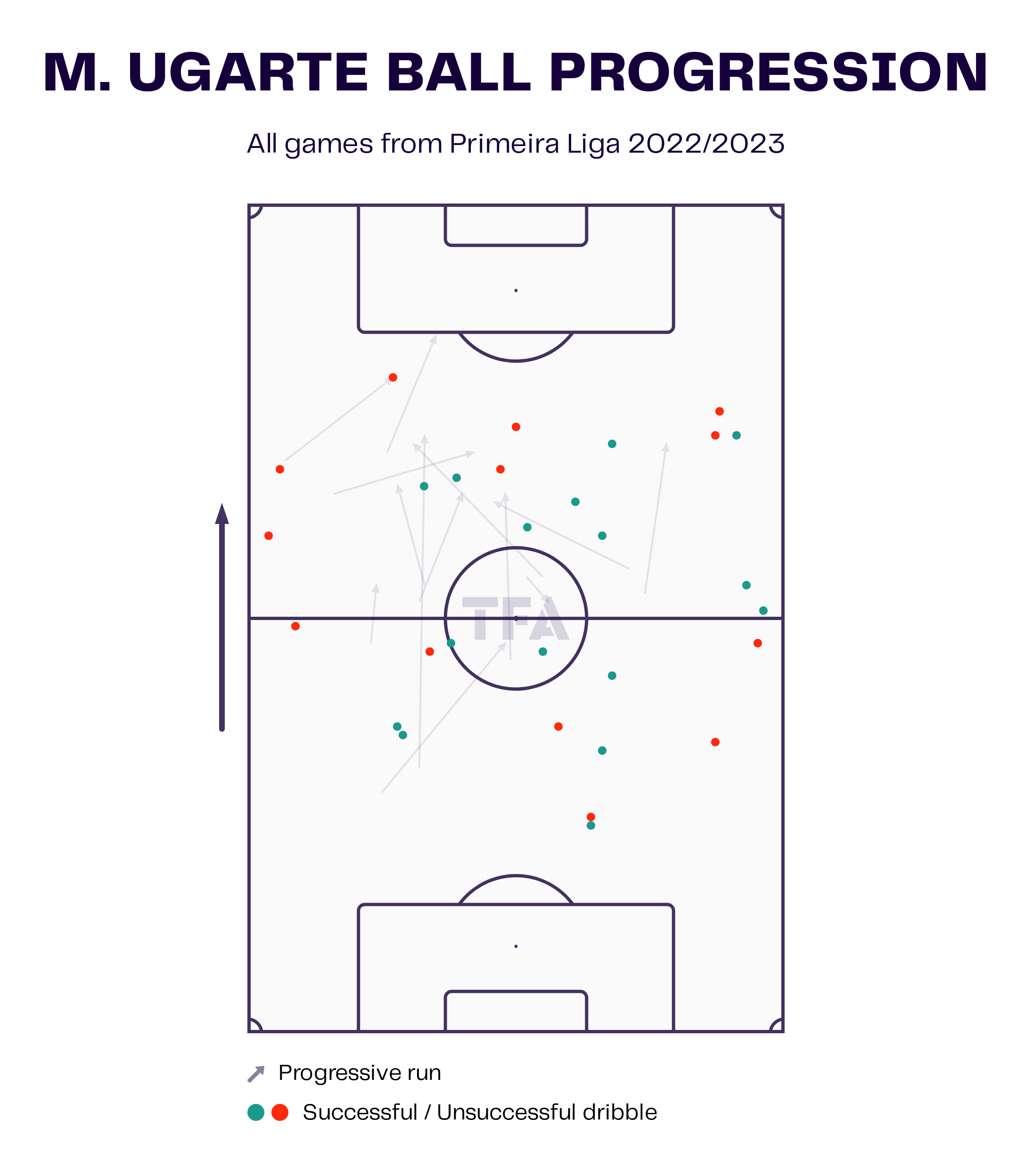 Another area where the young Uruguayan has displayed his potential is in progressing the ball forward. The above viz depicts the player’s ball progression actions from the current season. We can observe that most of his progressive runs are in the opposition’s half. Additionally, he has made several successful dribbles in the advanced areas as well as the middle third. Ugarte is averaging a decent amount of 2.7 dribbles and 1.21 progressive runs per match. This goes to show his growing confidence and composure in possession of the ball as well as his ability to progress it forward.

Sporting CP seems to have uncovered a gem of a budding defensive midfielder in Manuel Ugarte. A physically strong player, he excels at winning back possession for his team. Additionally, his sound passing and technical abilities allow him to move the ball around and carry it forward. Ugarte is already showing the potential to develop into a top-class player. It will be interesting to see how much longer Sporting can hold onto their promising talent before a bigger club moves for him.