As Liga Portugal enters game week 15, Vitoria SC hosts Rio Ave at the D. Afonso Henriques Stadium. Both teams are placed neck-to-neck in mid-table, with Vitoria at the sixth spot with 23 points, followed by Rio Ave in seventh with 19 points.

The hosts go into this fixture after a disappointing 3-0 loss on the road at Vizela and will want to bounce back to winning ways in front of their fans. Vitoria’s home record is impressive, and they are unbeaten in their last five home matches. They are the favourites to get all three points against Rio Ave. and will look to extend their winning streak at home to four games.

Rio Ave, on the other hand, have a slightly better overall shape. They have three wins and a draw in their last five league matches, with the draw coming in their last outing against Maritimo, which ended 1-1. Rio Ave’s form on the road has been poor, but they will be seeking their second away win of the season.

Below are some stats looking at the likelihood of the outcome of this match.

How have the teams performed? 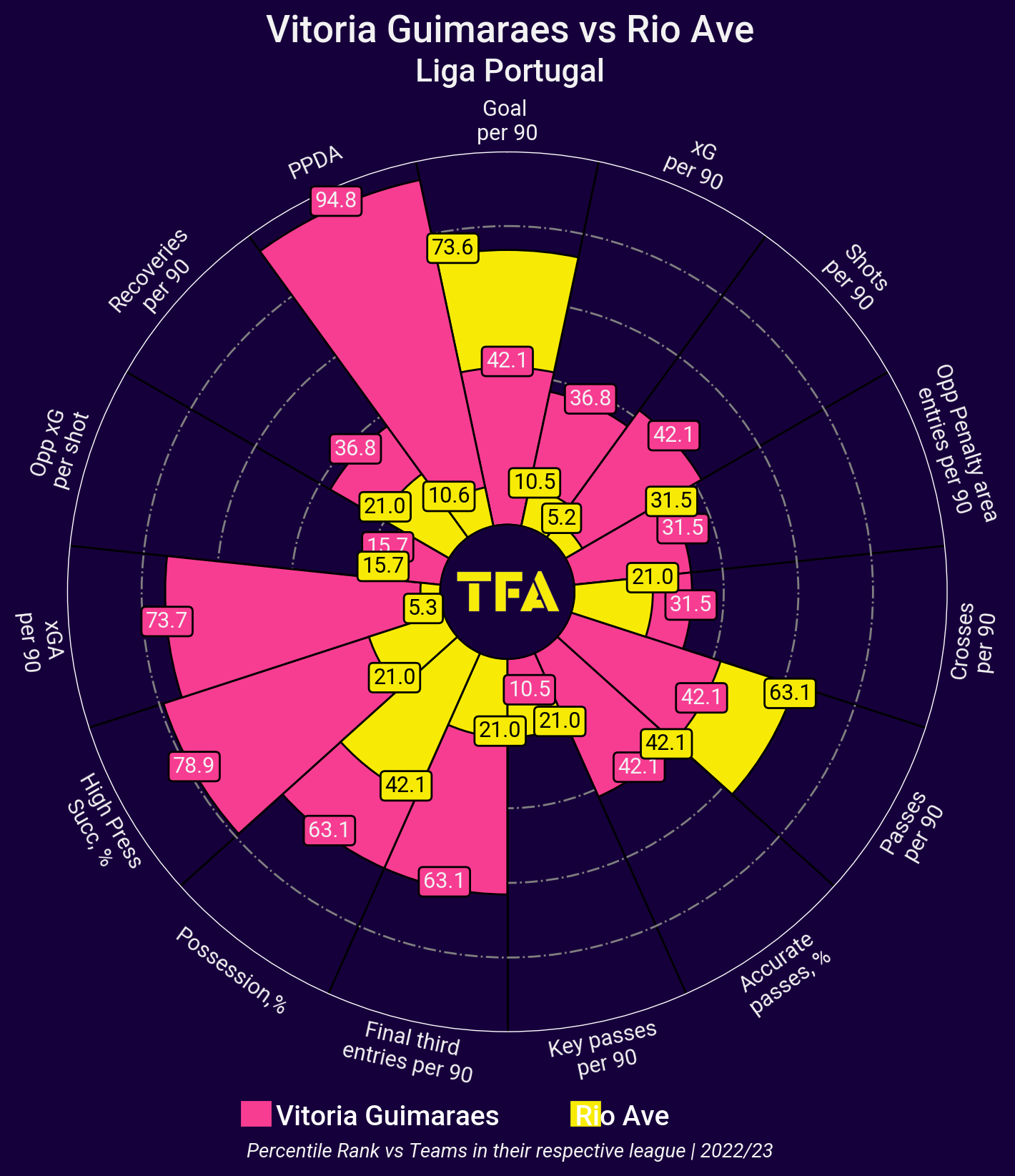 The viz above shows the percentile rank of both teams’ stats compared to each other as well as to other teams in Liga Portugal. It can be seen that Vitoria has better overall stats than Rio Ave in most departments. Notably, the club from Guimaraes have the upper hand in terms of shots per 90, possession rate, and high pressing success rate. Alternatively, there are a couple of departments where Rio Ave have superior stats such as goals and passes per 90.

Vitoria de Guimaraes have won seven, drawn two, and lost five of their 14 matches thus far. They have scored 14 goals, averaging 0.95 xG per match. Their defence has let in 16 goals with an xGA rate of 1.11. Manager Moreno’s team averages 11.07 shots per game with a 34.2% accuracy rate. Additionally, the team averages 49.82% possession per match.

Rio Ave, on the other hand, have won five, drawn four, and lost five matches. They have netted 17 goals, averaging 0.82 xG per match. Their defence has let in 19 goals with an xGA rate of 1.68. Rio Ave’s players take 9.43 shots per match with 34% accuracy. In terms of possession rate, they keep 49.19% ball possession on average per match. 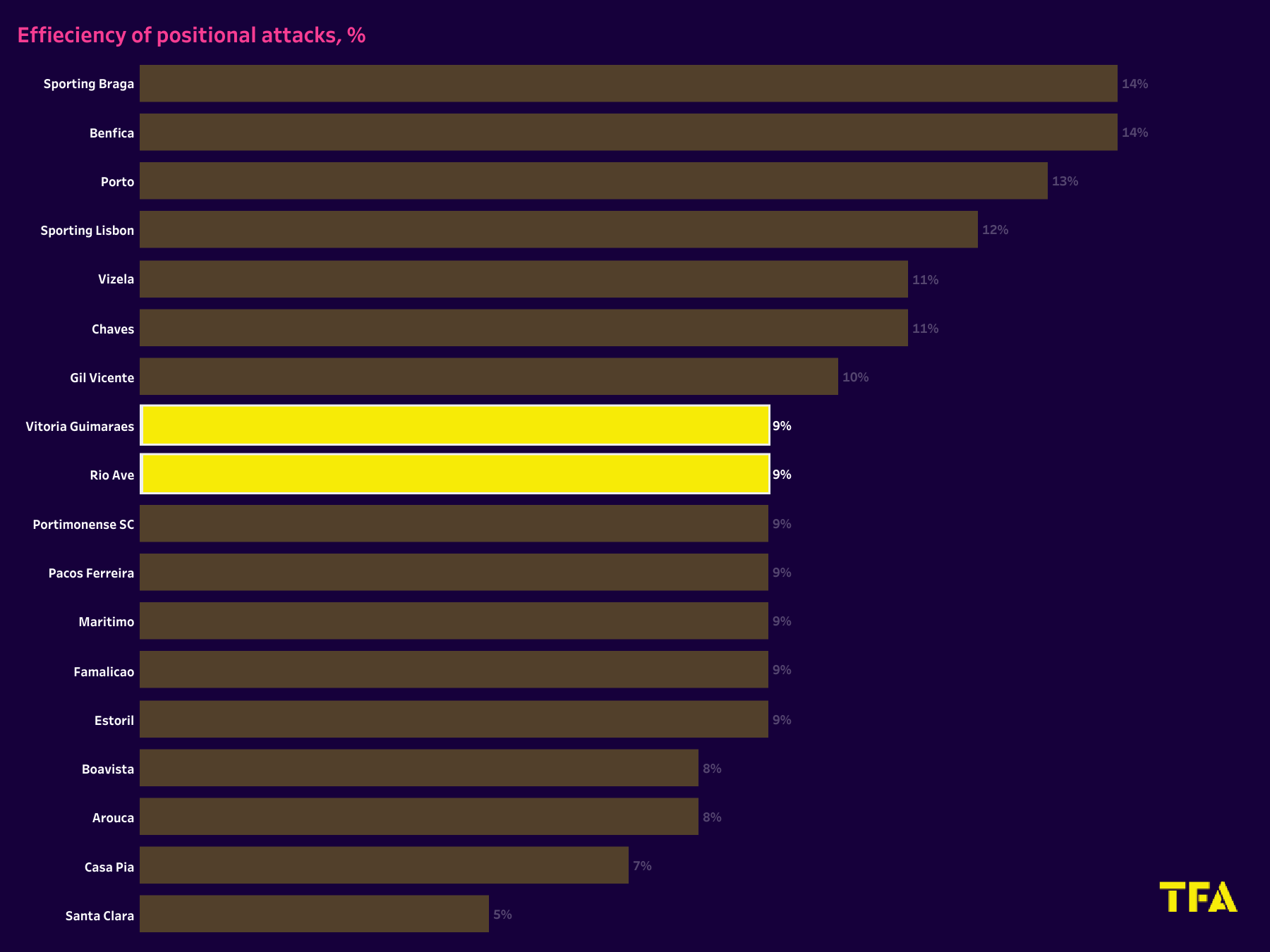 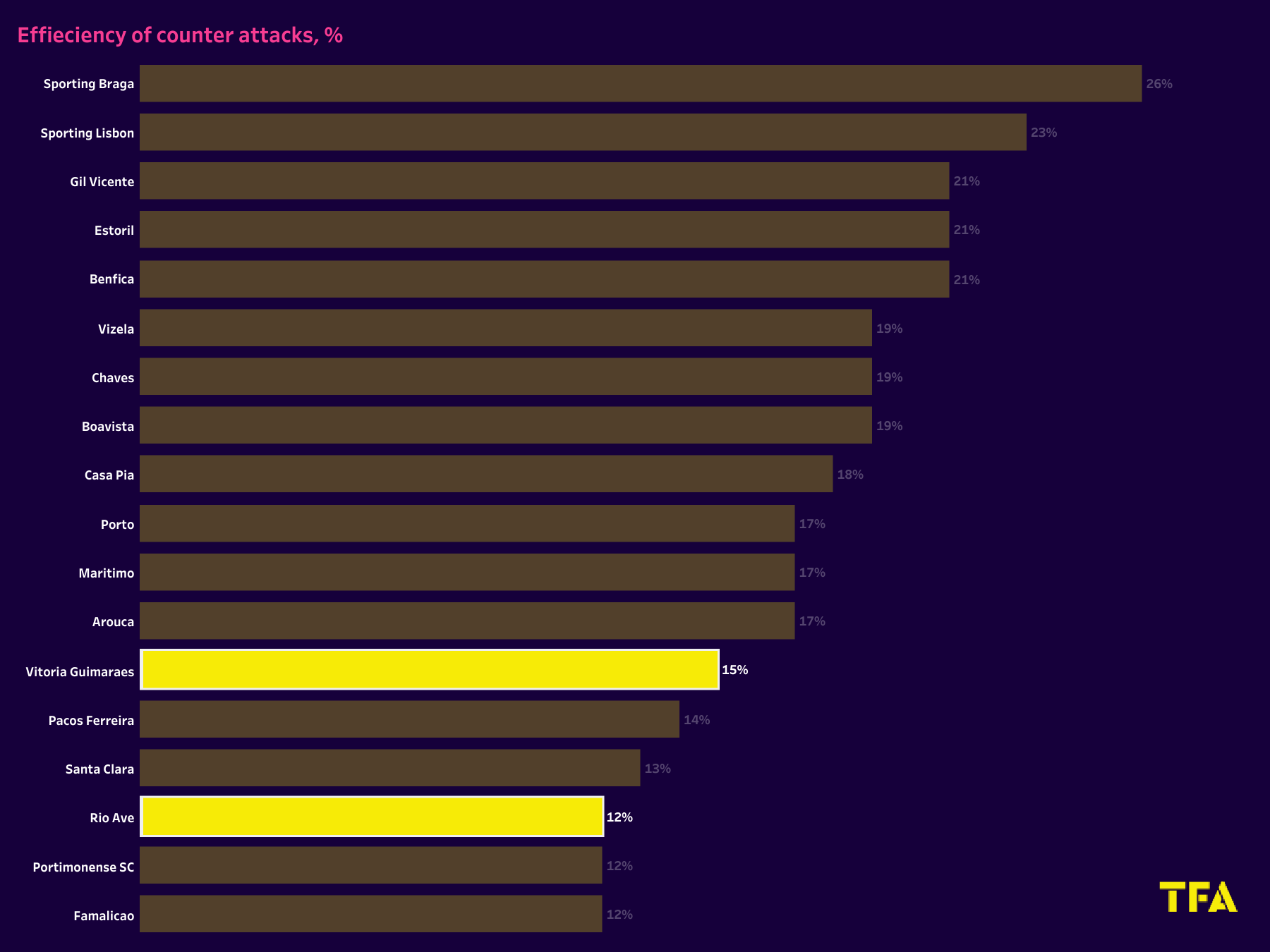 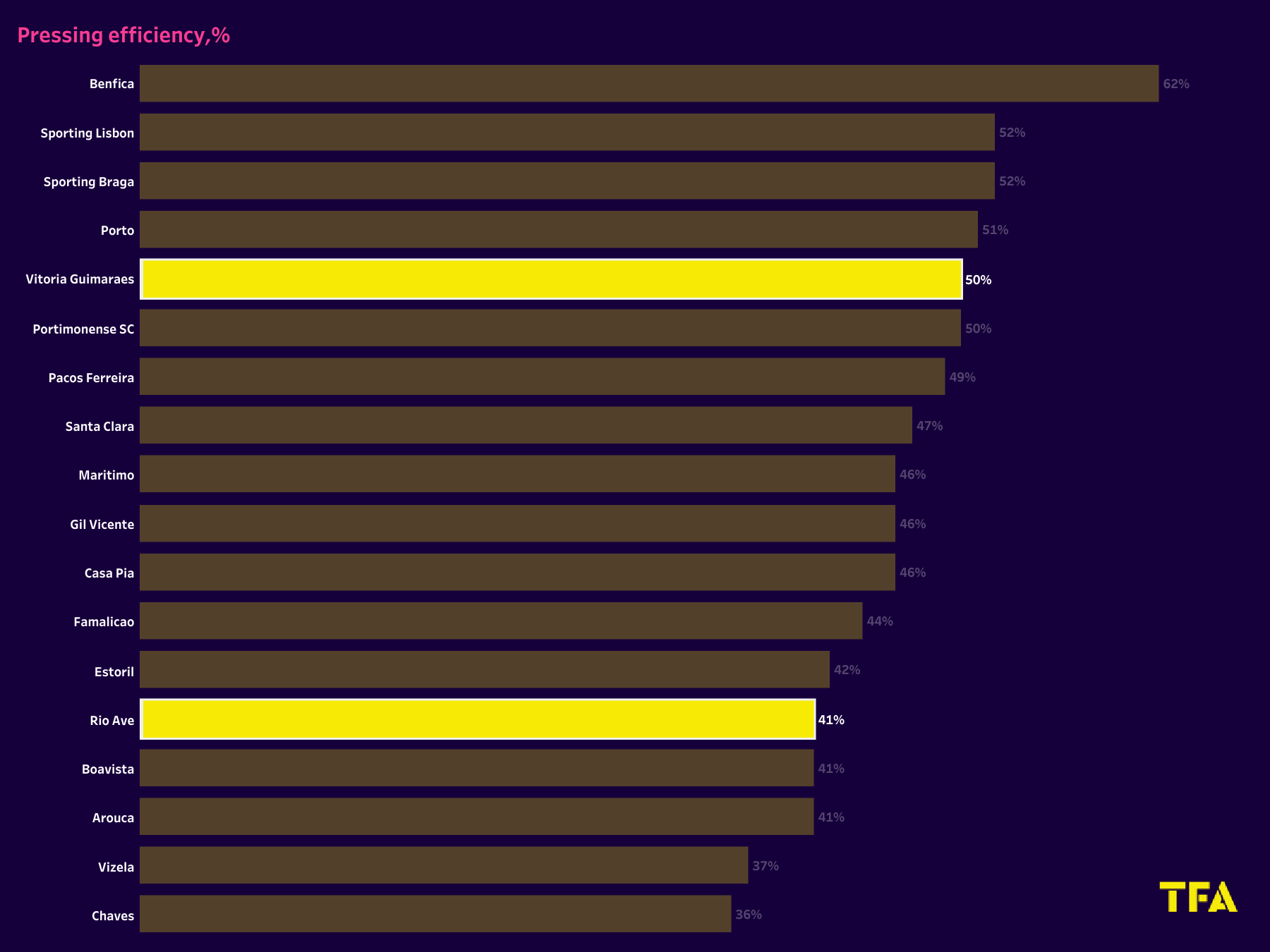 While Rio Ave’s attacking output is better than Vitoria’s, the hosts’ have better defensive stats than the visitors. The two visuals above compare both teams on the basis of pressing efficiency and recoveries. As we can see from the first visual, Vitoria are ranked fifth on the list with 50% pressing efficiency and is ranked in the top 78.9 percentile for a high press success rate. Rio Ave are much lower on the list, with 41% efficiency in pressing.

Vitoria’s high-pressing style allows them to recover the ball in the attacking half. The second visual shows that Vitoria is able to recover the ball more frequently in the attacking half compared to their opponents. The team makes an average of 78.14 recoveries per match, compared to Rio Ave’s average of 72.71 recoveries. Despite not following as much of a pressing style as the hosts, Rio Ave is still able to make a considerable amount of recovery. 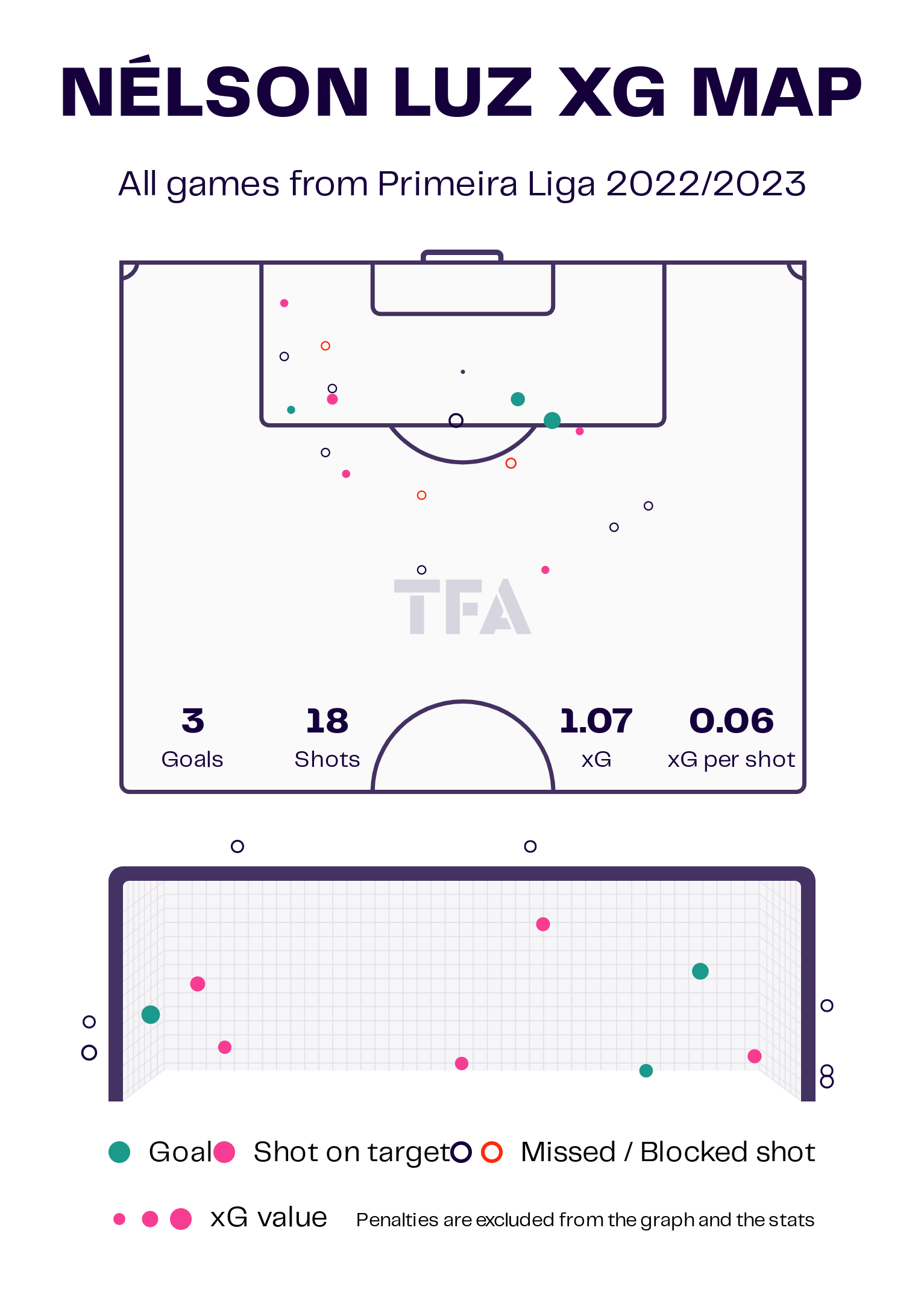 Nelson Luz is one of Vitoria SC’s top performers in Liga Portugal 2022/23. The 24-year-old midfielder has taken charge of getting goals for his team in recent weeks. He has taken a total of 18 shots this season, with eight on target, and scored three goals, all of which have come in the last five matches. Vitoria will be expecting more of the same from their in-form attacker against Rio Ave. 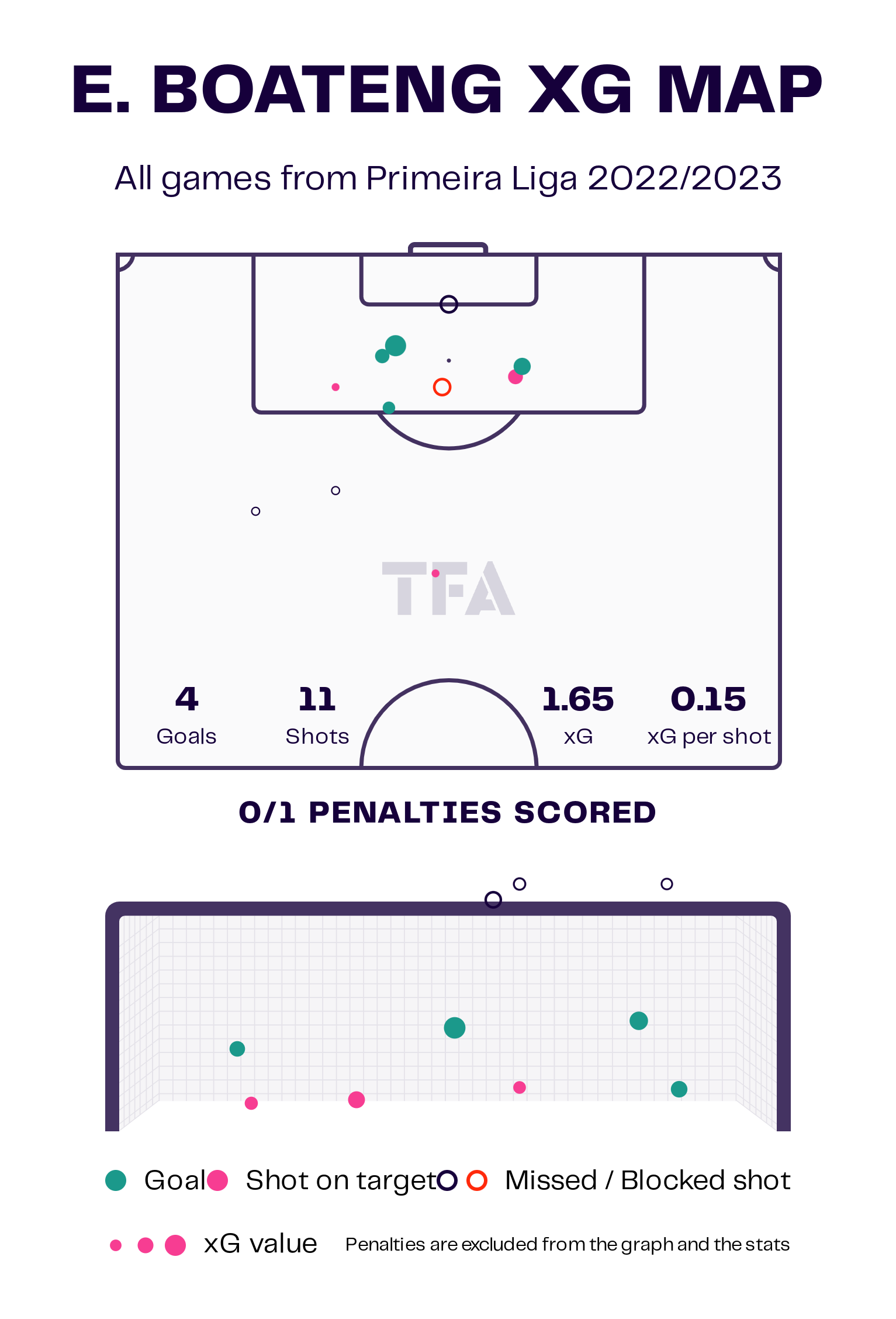 With Yakubu Abdul-Aziz departing for Al Ahly, it will be Emmanuel Boateng’s responsibility to lead Rio Ave in the attack. With four goals under his belt this season, Boateng is the team’s second-highest scorer after Aziz. He has been remarkably accurate with his shots, with seven out of the 11 attempts landing on target. Boateng will be keen to lead the visitors from the front and put his goal-scoring abilities on display against Vitoria.

Vitoria SC will be without midfielder Tomas Handel due to injury. Apart from that, the rest of the squad should be fit and ready to play for the hosts.

Rio Ave are likely to miss the services of attackers Andre Pereira and Joca. Other than the two, the visitors should put out a full-strength lineup.

Both teams will be eager to start the new year on a positive note by getting all three points. Vitoria’s motivation will be to bounce back into form and widen the gap in the table between them and the visitors, who sit seventh. On the other hand, Rio Ave’s mission will be to narrow the gap between them and the top six and to continue progressing up the Liga Portugal table.