Vitoria SC will welcome FC Porto at the D. Afonso Henriques Stadium for the matchday 17 clash in Liga Portugal. With both teams in the top half of the table, this will be a closely contested encounter. Vitoria de Guimaraes sits sixth with 24 points, but are amidst a poor run of form with three losses in the last five matches (1W, 1D). On the other hand, Porto will go into this fixture ranked third with 36 points. The visitors are on a rich run of form, remaining unbeaten in their last six games (4W, 2D). Porto will be the favourites to take three points, but Vitoria SC will be determined to pose a formidable challenge for the visitors in their territory. Below are some stats looking at the likelihood of the outcome of this match.

How have the teams performed so far? 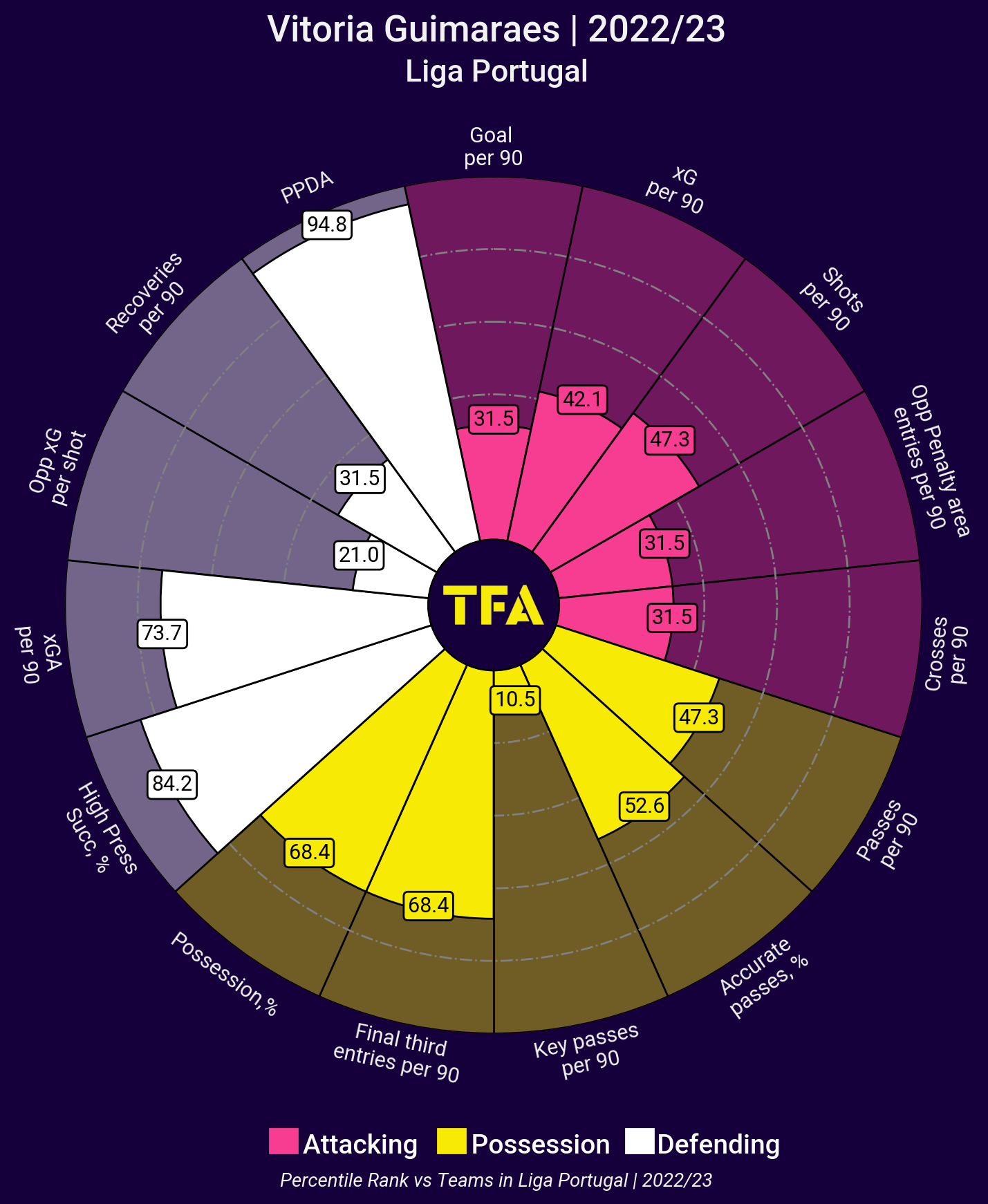 Vitoria de Guimaraes have won seven, drawn three, and lost six out of 16 matches in Liga Portugal 2022/23. They have managed to register only 15 goals so far while averaging 1.09 xG per match. Their defence has let in 18 goals with an xGA rate of 1.13. Vitoria SC are winless in three matches and lost 2-1 away at Gil Vicente last time out.

The viz above shows the percentile rank of Vitoria’s stats compared to other Liga Portugal teams. While they don’t have a good percentile rank to show in attack, they have fared well in defence for indicators like passes per defensive action, pressing success rate, and xGA. A couple of other areas where they have been decent are the rate of possession and final third entries. 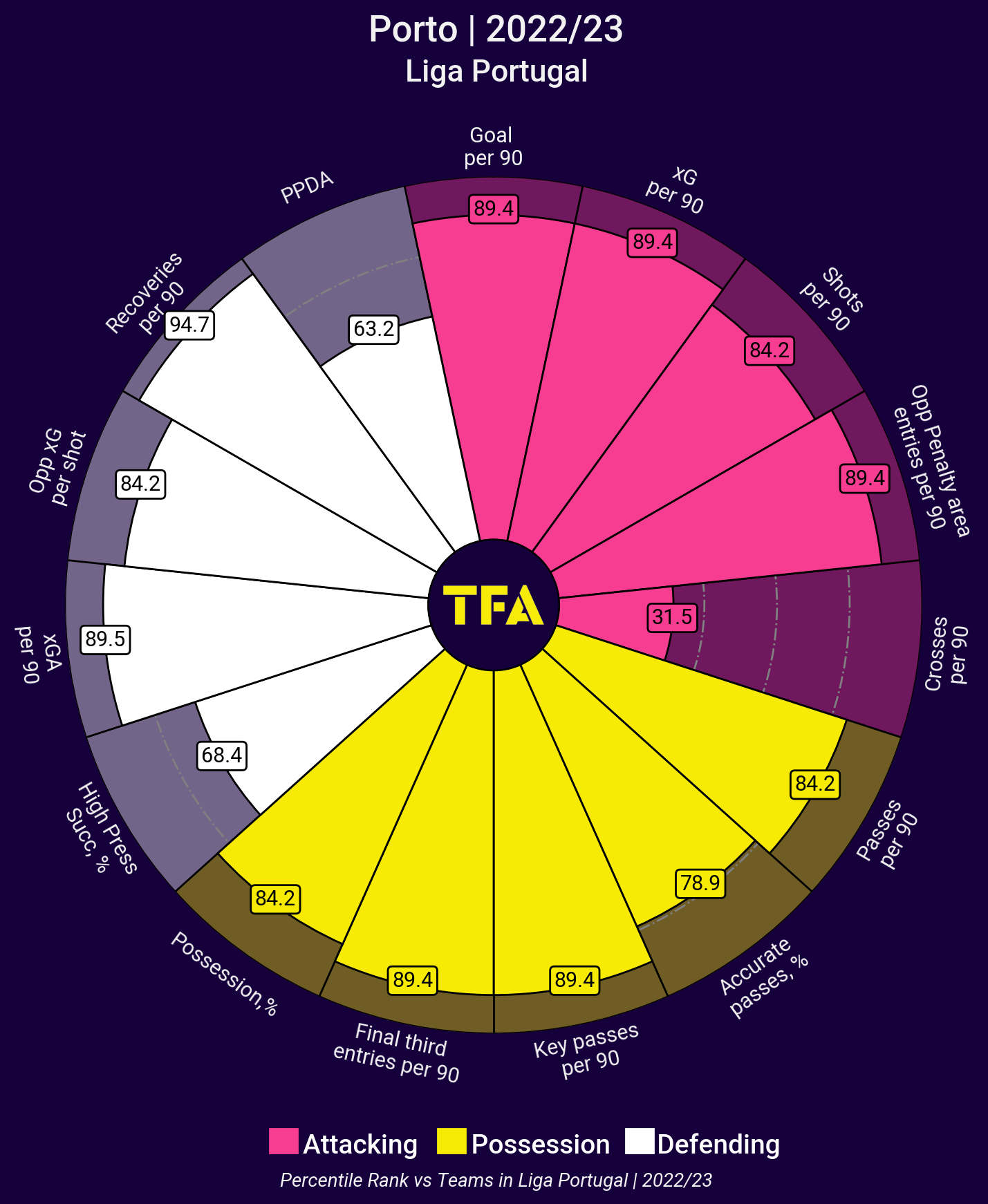 Porto, on the other hand, have won 11, drawn three, and lost two matches. The Dragons have netted 40 goals, which is the joint-highest total, averaging 2.38 xG per match. Their defence has let in 11 goals with an xGA rate of 0.76. Following their 4-1 defeat of Famalicao most recently, Sergio Conceicao’s side will be looking to extend their impressive unbeaten run to seven games with another win. The viz above portrays the high percentile rank of Porto across almost all areas except crosses, PPDA, and pressing success rate. This indicates Porto have been one of the best teams in Liga Portugal, as is often the case. 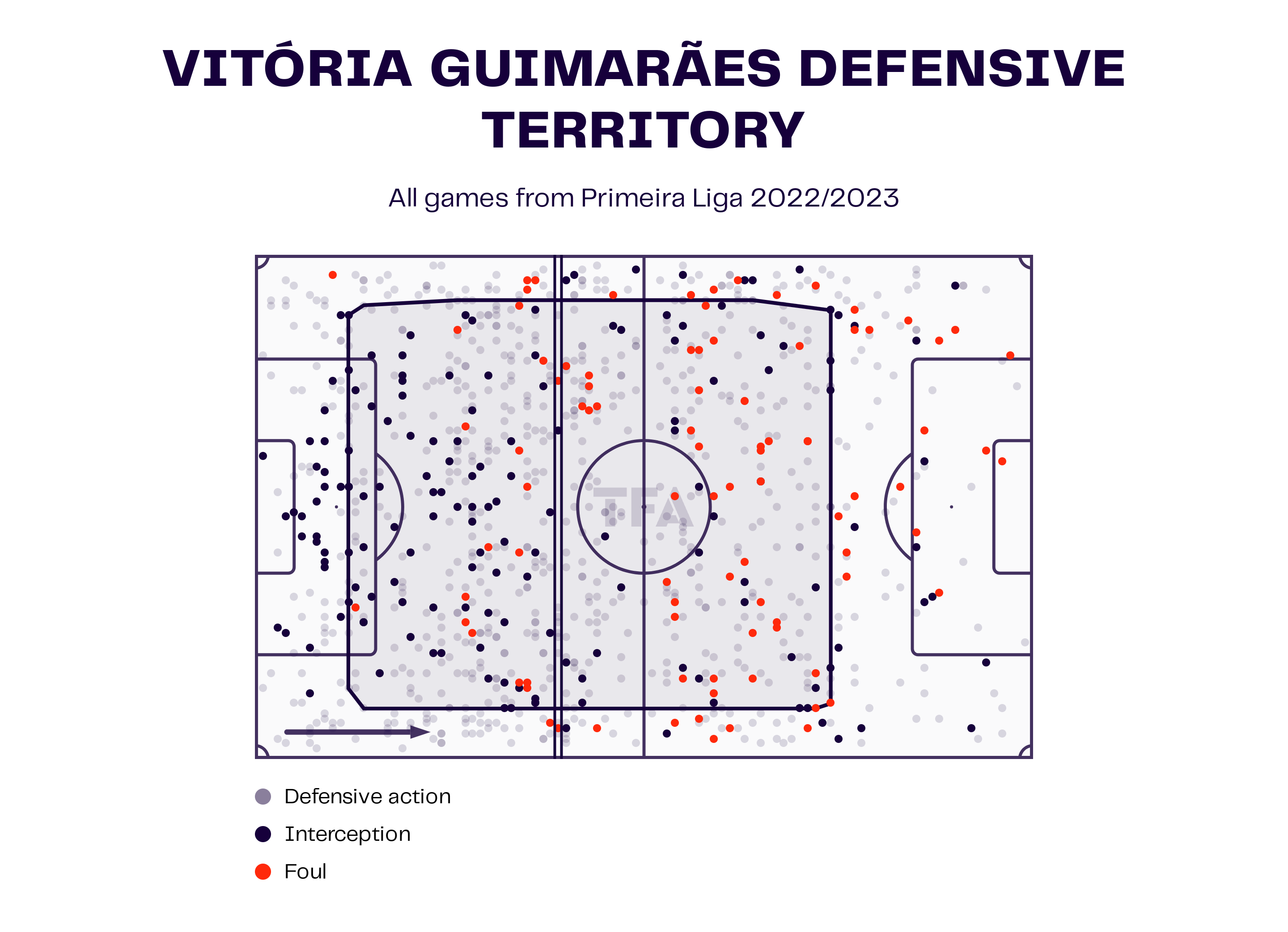 Vitoria de Guimaraes’ defence will be the key to obtaining a positive result against an offensive Porto side. They have conceded 18 goals thus far, which is a better record than most other Liga Portugal teams. Manager Moreno’s team intercepts the ball 44.19 times per game, recovers it 79.31 times, and clears it 18.06 times. Additionally, they win 62.2% of their defensive duels and 42.8% of their aerial duels. Vitoria’s defence will be up against a tough test against the visitors.

Porto, on the other hand, wins 56% of their defensive duels and 52% of their aerial duels. They make 37.69 interceptions and 87.69 recoveries per match and will look to not give away many chances to Vitoria’s attackers. 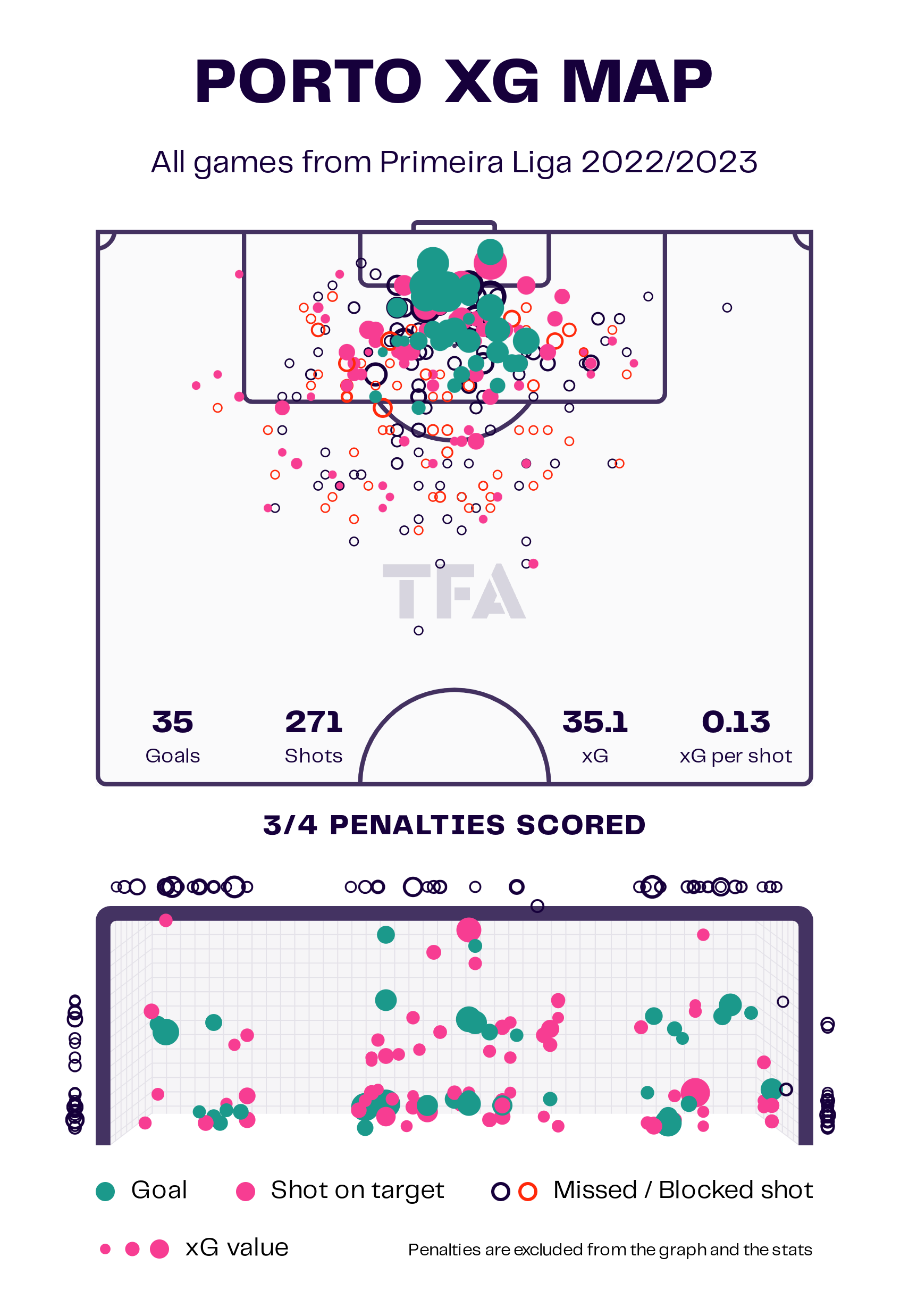 Porto’s style of play will be offensive from the start. Sergio Conceicao’s side has averaged 35.75 positional attacks and 1.81 counterattacks per match this season. On average, they take 17.2 shots per match and have a 40% accuracy rate. The above viz shows that Porto have scored all of its goals from close range inside the penalty area but also possesses the ability to attempt long-range efforts.

In comparison, Vitoria creates a lower number of 27.06 positional attacks per match. However, they launch counterattacks at a similar frequency as their opponent, with 1.81 such attacks seen per match. Additionally, they take an average of 11 shots per match and have a 33% accuracy rate. 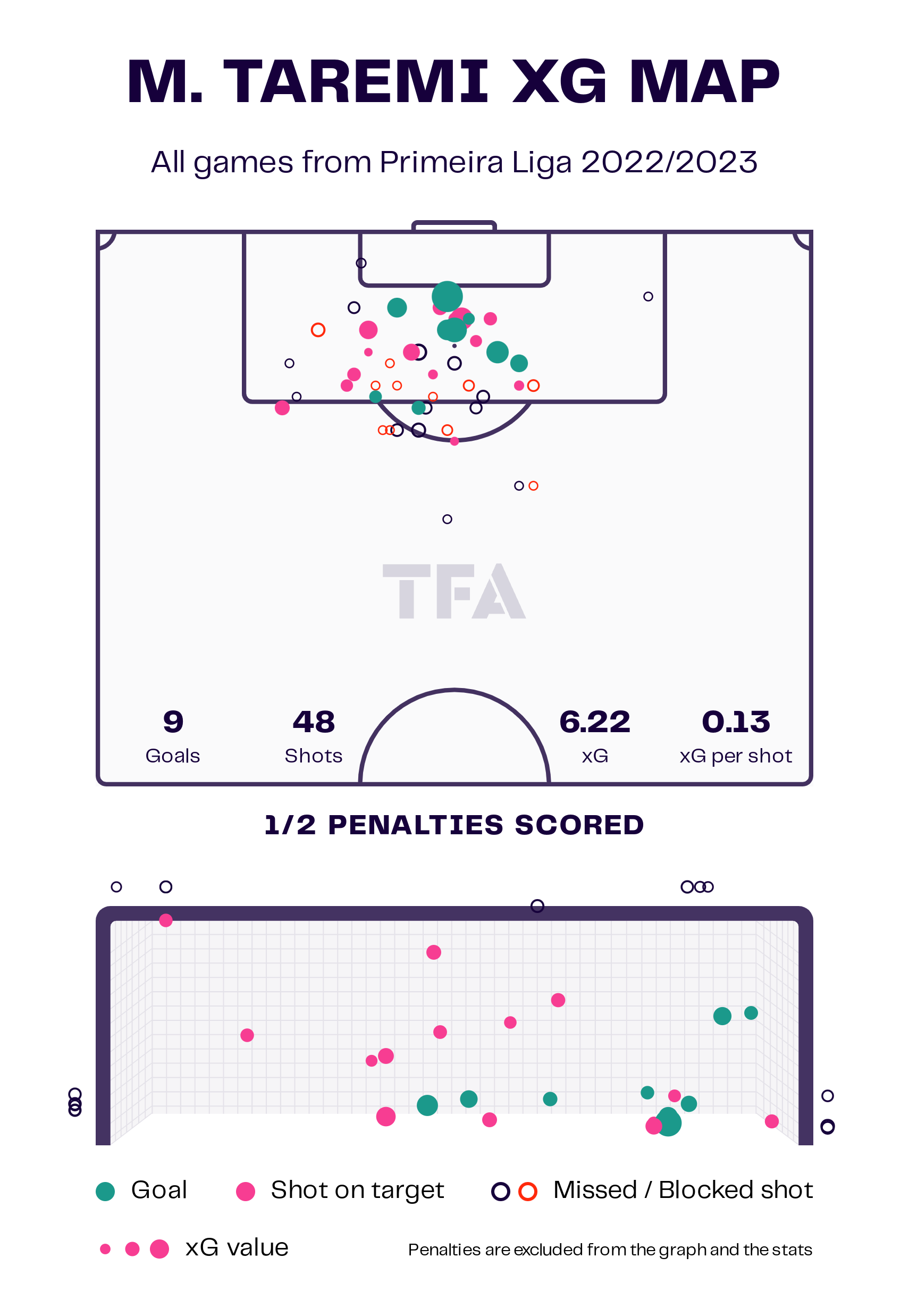 Mehdi Taremi will pose one of the main threats from Porto’s attack. He has been in prolific form and has the highest goal contribution in the league with ten goals and five assists. He attempts 3.1 shots per match with 47.8% accuracy and has an xG per shot of 0.13. Vitoria’s defenders will have to keep the Iranian forward at bay if they want to achieve a positive result. 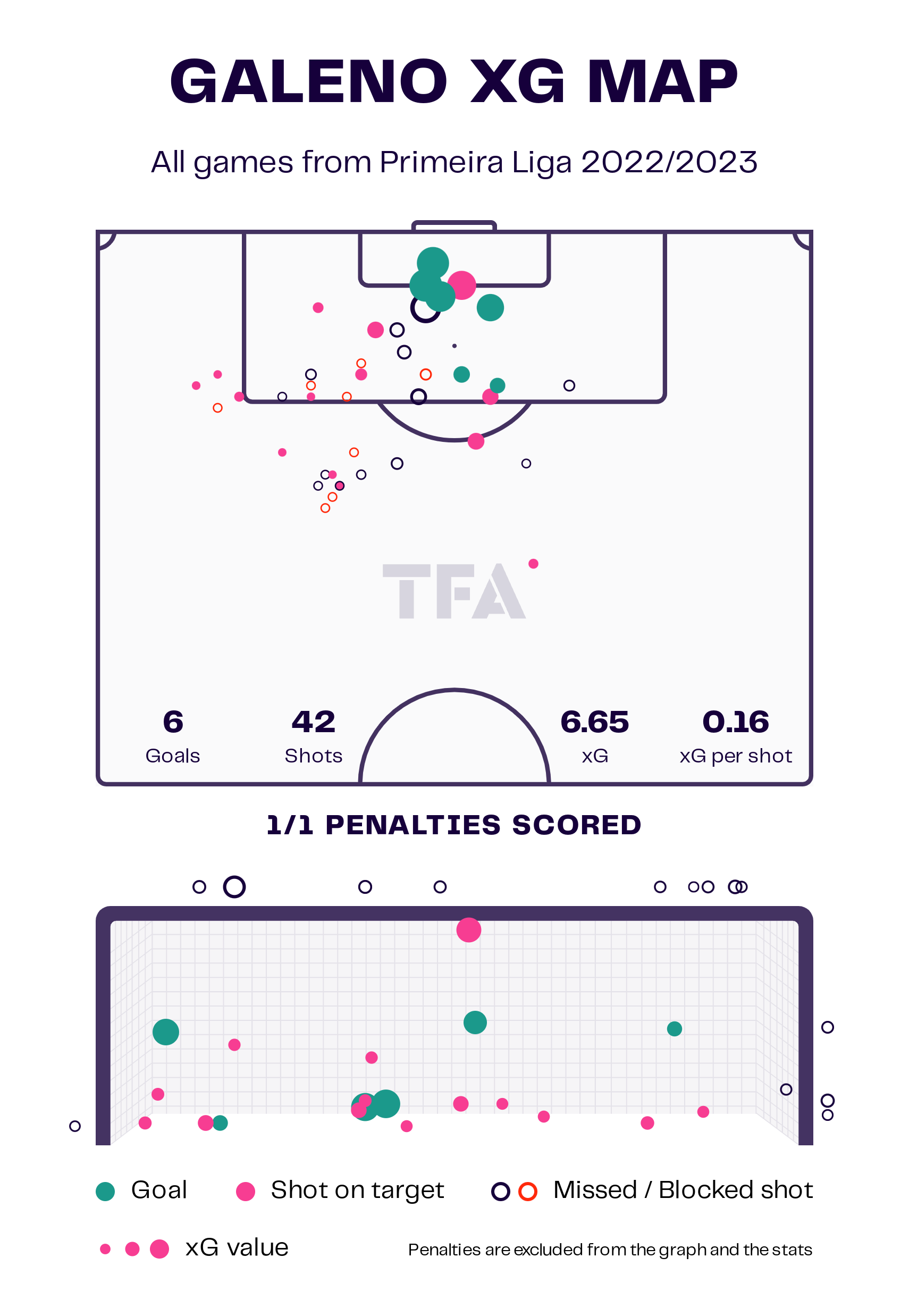 Wenderson Galeno is another Porto player who has impressed this season. He netted a brace in his last match, taking his goal tally to seven for the season along with two assists. The Brazilian attacker is one of the prime threats inside the box and has an xG of 0.16 per shot. Vitoria’s defenders will have the challenging task of limiting Galeno’s attacking prowess in this fixture.

Vitoria SC will be without injured midfielder Tomas Handel. Apart from that, the rest of the squad should be fit and ready to play for the hosts.

Meanwhile, Porto are expected to miss the services of important players like Evanlison and Zaidu Sanusi through injury. Other than these two players, Porto should name a strong starting lineup.

This will be an exciting matchup between Vitoria SC and Porto. While the visitors will be the favourites, both teams will be poised to obtain a positive result. Vitoria’s motivation will be to bounce back into form and improve their position in the top half of Liga Portugal. On the other hand, Porto’s mission will be to take all three points and keep the pressure on their rivals in the title race.