The Liga Portugal 2022/23 action resumes after the World Cup break when FC Porto hosts FC Arouca for the match week 14 fixture on Wednesday, December 28. While Porto sits at the top end of the table in second place, Arouca finds themselves in the mid-table in the tenth spot.

Porto have won nine, drawn two, and lost two matches this season. The home team has scored 31 goals with an average xG rate of 2.24 per match. They have conceded only nine goals with an average xGA rate of 0.78. Porto will be adamant to return to action in full steam and take all three points to keep the pressure on league leaders Benfica.

Arouca have won five, drawn four, and lost four matches thus far. They have scored 14 goals and conceded 19 in total. The average xG rate of the team is 0.82, while their xGA rate is 1.53. They are in good form, with ten points from their last five matches. However, getting a result against Porto on their home turf will prove a monumental task for the away team. 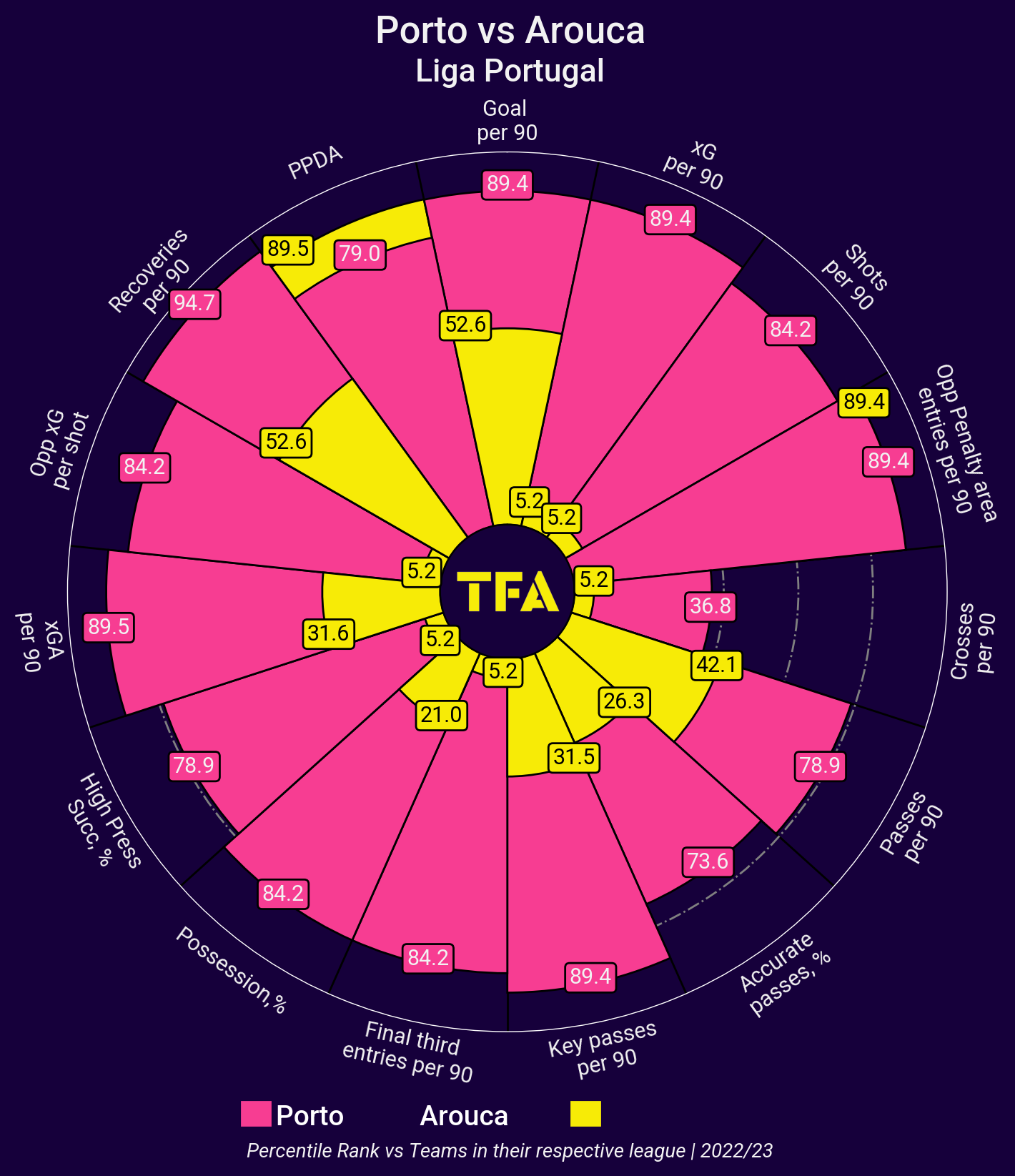 The above viz shows the percentile rank of both teams compared with each other as well as with other teams in the league. Under all indicators, the Porto have a significantly higher percentile rank than their opponents. They are challenging for back-to-back titles as they look to reduce the eight-point gap at the top of the table. Arouca have displayed consistency in the last few fixtures as they look to secure a top-half finish. But it will require a special performance from them to earn a result against the Portuguese giants. 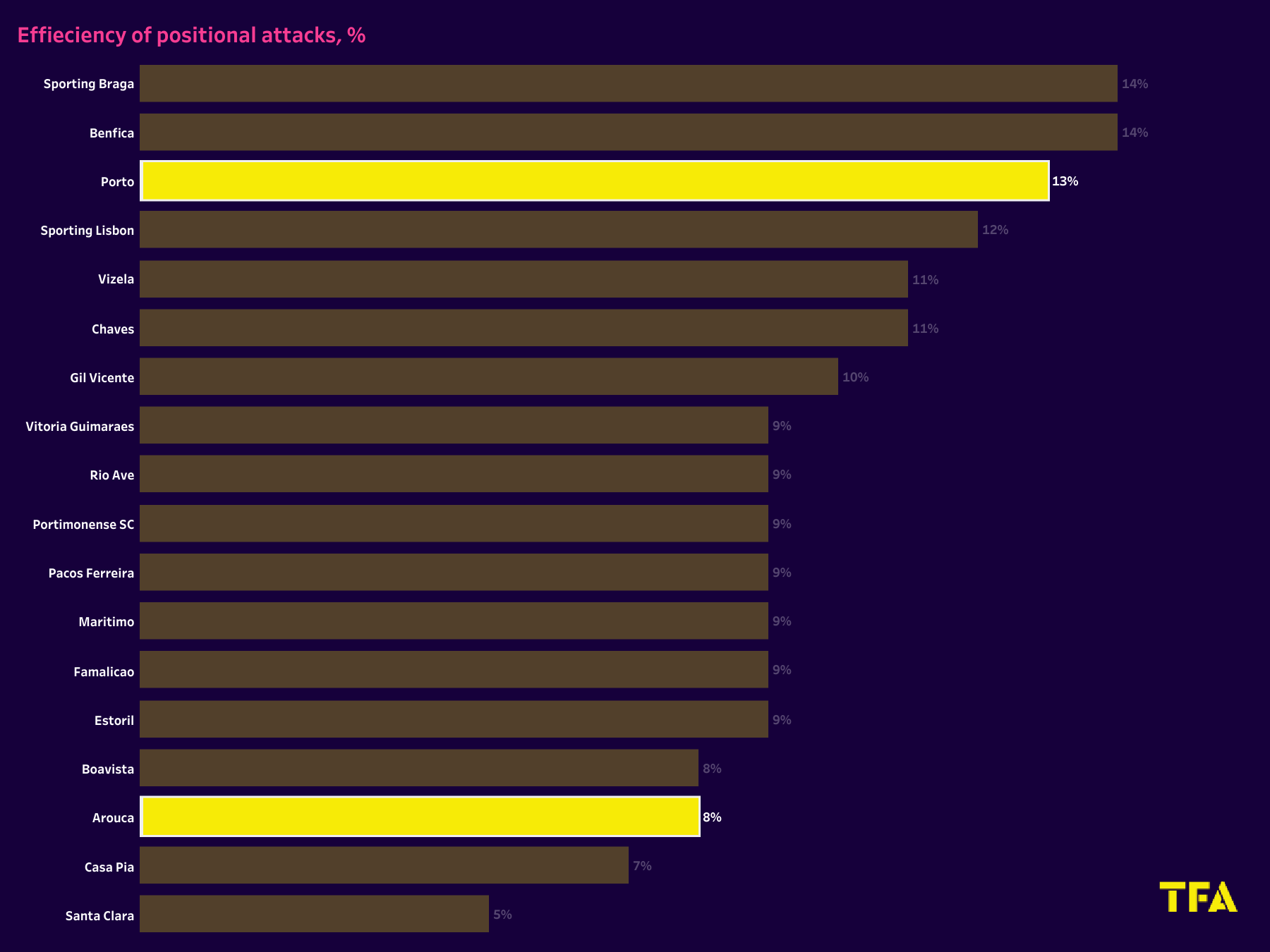 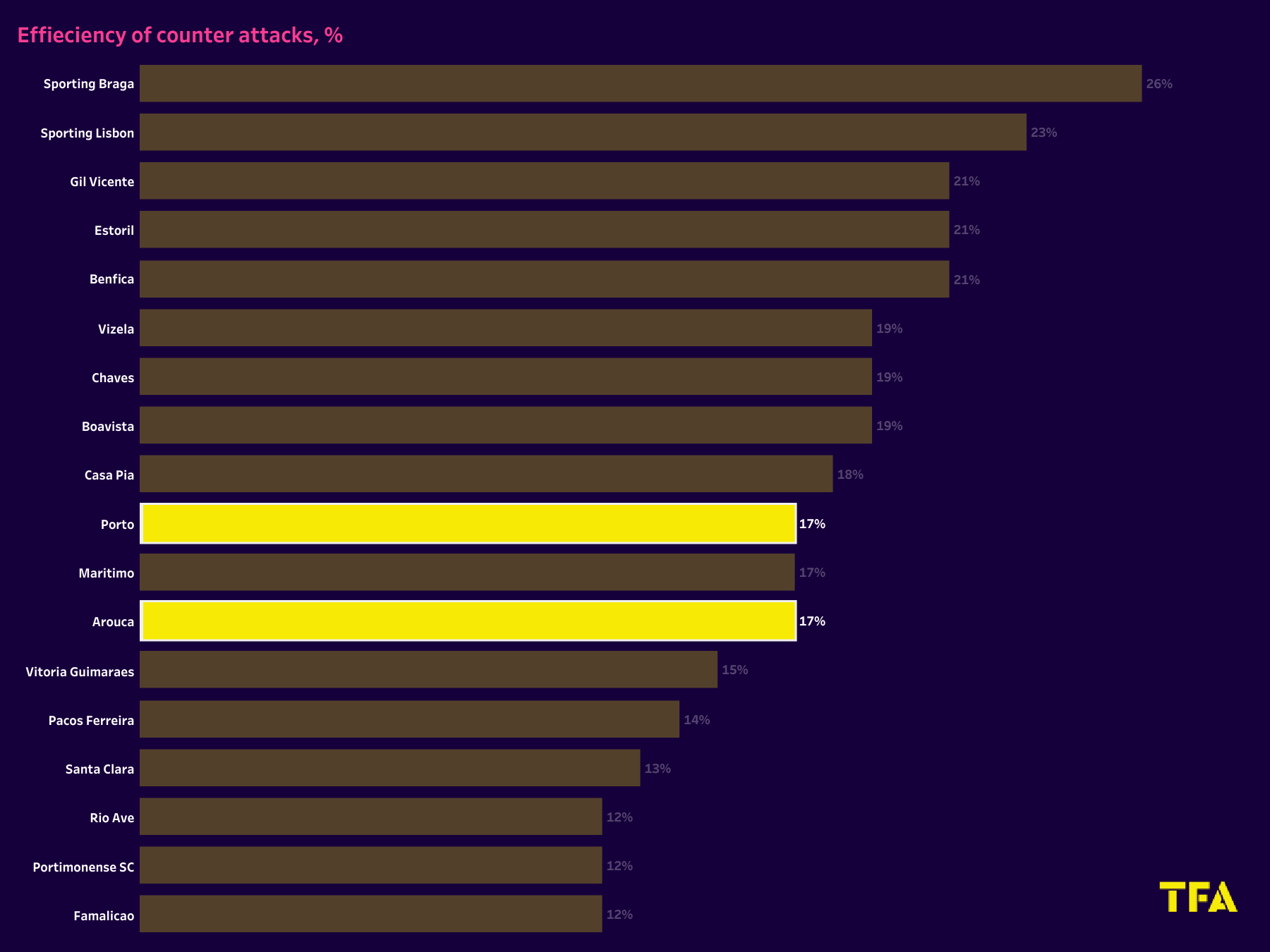 FC Porto have been one of the most efficient sides when it comes to the attacking department. The Dragons launch 33.4 positional attacks and 1.70 counterattacks per match on average. Their efficiency for positional attacks is among the highest. However, in terms of counterattacks, the efficiency is average, as Porto is often the more expansive side against their opponents.

Meanwhile, Arouca creates an average of 21.62 positional attacks and 1.54 counterattacks per match. They have been decent in both attack and defence in their last few matches and will hope to display the same intent in both departments against their decorated opponents. In terms of efficiency, they enjoy more success with their counterattacks compared to positional attacks. We can expect Porto to be the aggressor in this fixture, with Arouca sitting back and trying to hit them on the break. 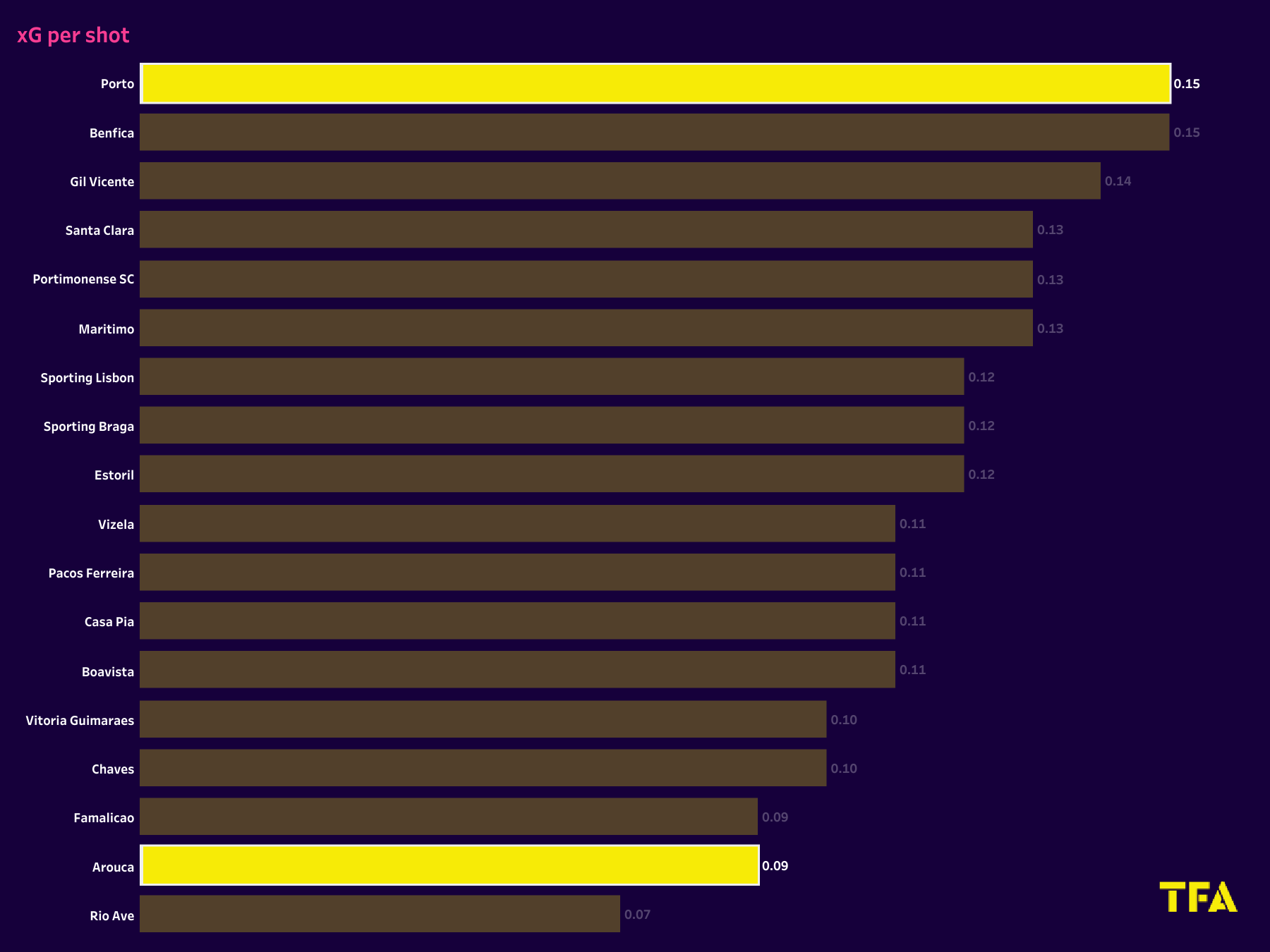 FC Porto takes 16.85 shots per match with an accuracy rate of 37%. Alternatively, Arouca takes 9.62 shots per match and has an accuracy rate of 34.4%. The above viz shows Porto possessing the highest xG per shot in the top division, while their opponents have the second-lowest ranking in terms of the metric. While the Dragons will look to enhance their goal tally further, the Arouquenses will be motivated to be defensively solid. 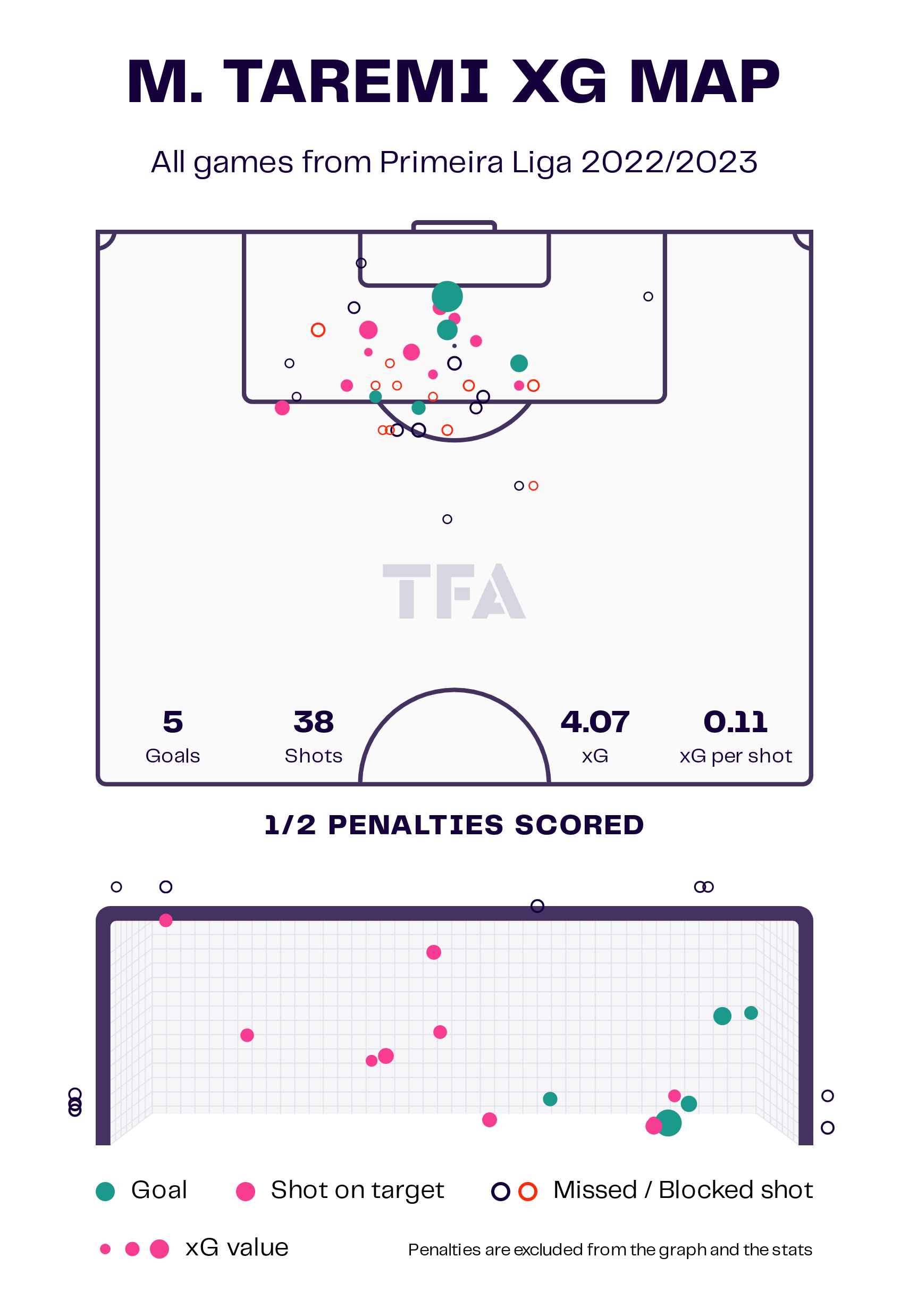 This will be another occasion for Mehdi Taremi to show why he’s one of the stars of Liga Portugal. The experienced Iranian striker is having an excellent season, with six goals and five assists for his club. Currently, he is both the leading goal scorer and provider for his team this season and will be hungry to increase his goal contribution tally further. 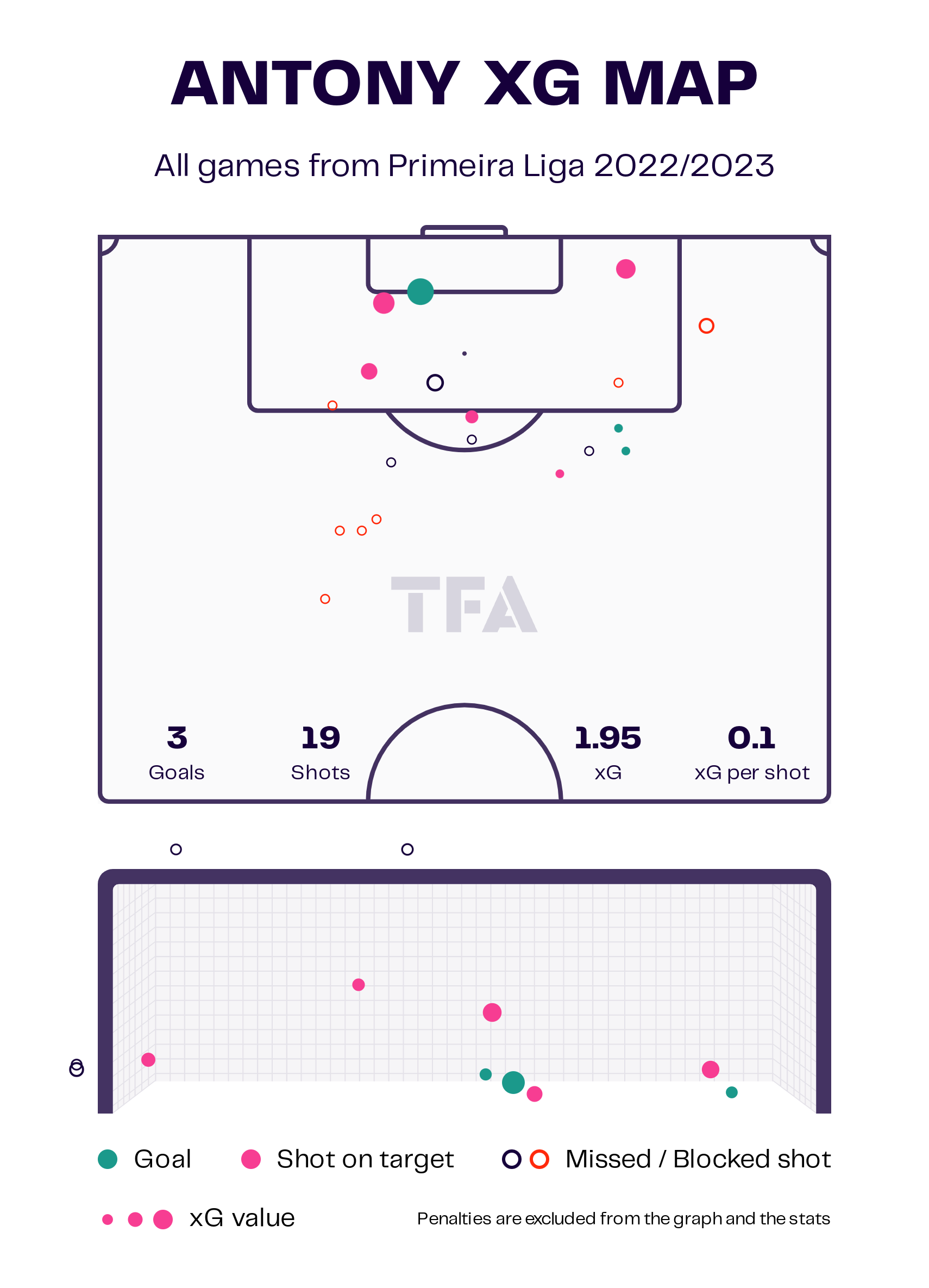 Winger Antony Alves has been one of Arouca’s key players in Liga Portugal 2022/23. The 21-year-old winger’s tally of three goals has come in his last five outings. He tends to occupy the wide positions on the left flank before moving inside to register an attempt. He will prove crucial in attack for his team to mount any sort of threat on the Porto backline.

FC Porto are expected to be without Stephen Eustaquio, Evanlison, Zaidu Sanusi, and centre-back Pepe.

Meanwhile, Arouca are likely to put out a full-strength starting eleven with no known injuries or suspensions in their squad.

This will be a must-win fixture for FC Porto to remain in the title race and retain the pressure on the league leaders. They will look to collect all three points at home and register three consecutive wins to keep the momentum going. Arouca, on the other hand, will be motivated to stir up an unlikely upset.