As we head into game week 16 of Liga Portugal, Sporting Braga will welcome Boavista to the Braga Municipal Stadium on Saturday night. The hosts head into this matchup placed second in the rankings with 34 points, six points behind table-toppers Benfica and one point above third-placed Porto. Boavista, on the other hand, are currently ranked tenth with 20 points. Braga will be keen to continue with their fine form and extend their winning streak to four matches, while the visitor will look to bring a tough game and halt the hosts’ momentum by trying to secure at least a point. Below are some stats looking at the likelihood of the outcome of this match.

How have both teams performed so far?

Braga is having a fantastic season in Liga Portugal. They have won 11 matches, drawn one, and lost three matches thus far. The team has scored 36 goals while averaging 2.23 xG per match. Their defence has let in 12 goals with an xGA rate of 1.14. Braga are in superb form, winning four out of their last five matches, including 3-0 and 4-0 victories against Benfica and Santa Clara, respectively, in their last two matches. 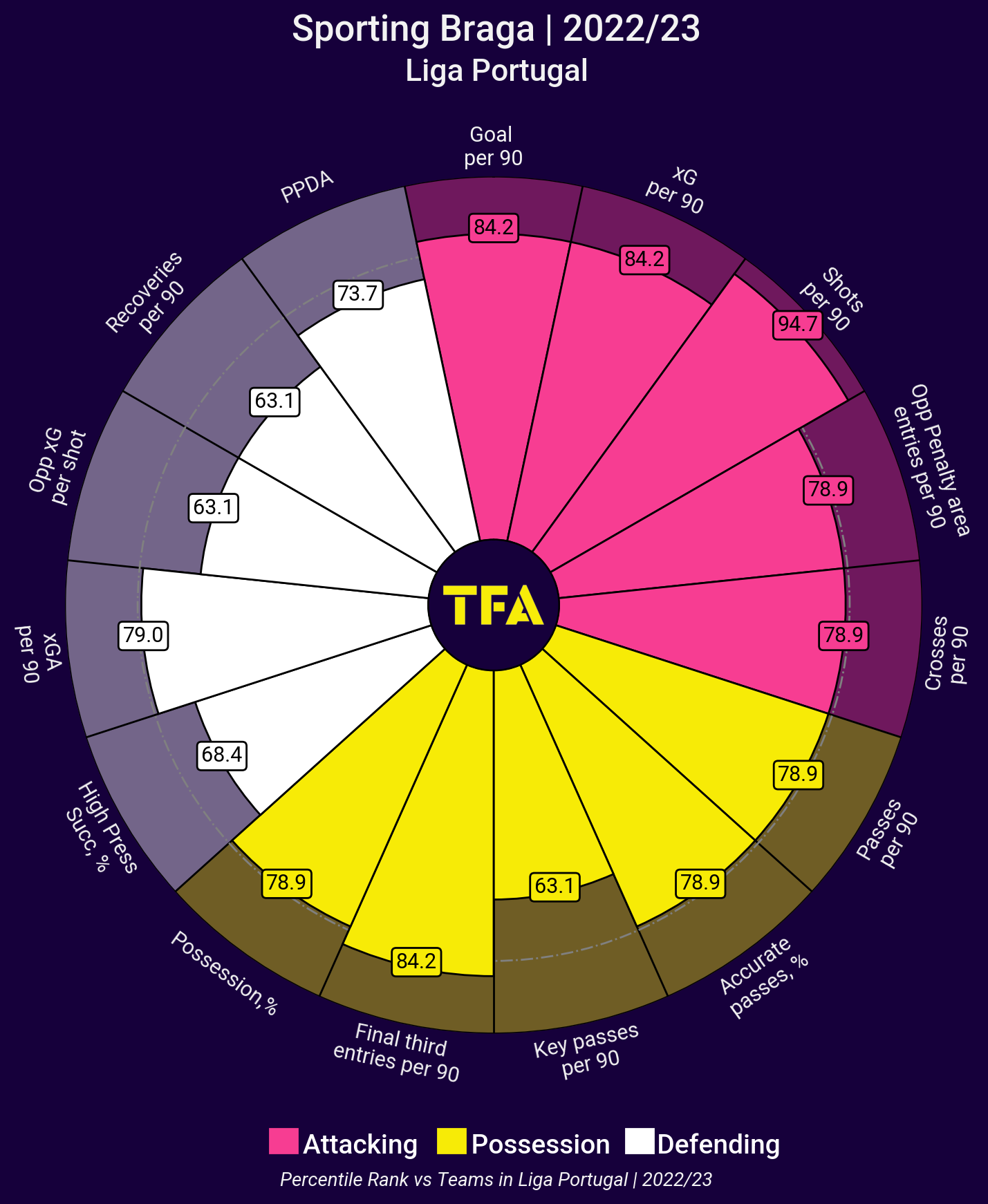 Braga have been one of the best performers in Liga Portugal 2022/23. The above viz shows the percentile rank of the team’s stats in comparison to the other teams. We can observe that Artur Jorge’s team possesses a high percentile rank in most of the attacking, possession, and defence parameters. Notably, the team has a superior rank in terms of shots, final third entries, and xGA. Braga will look to continue their winning streak and sustain the pressure on their rivals.

Boavista, on the other hand, showed decent form earlier in the season but have struggled in recent weeks. They have won six matches out of 14, drawn two, and lost six. The team has netted 15 goals with an xG rate per match of 1.12. They have conceded 23 goals, averaging 1.35 xGA per match. Boavista have won one, drawn one, and lost three of their last five league outings. They won 1-0 against Gil Vicente in their last match. 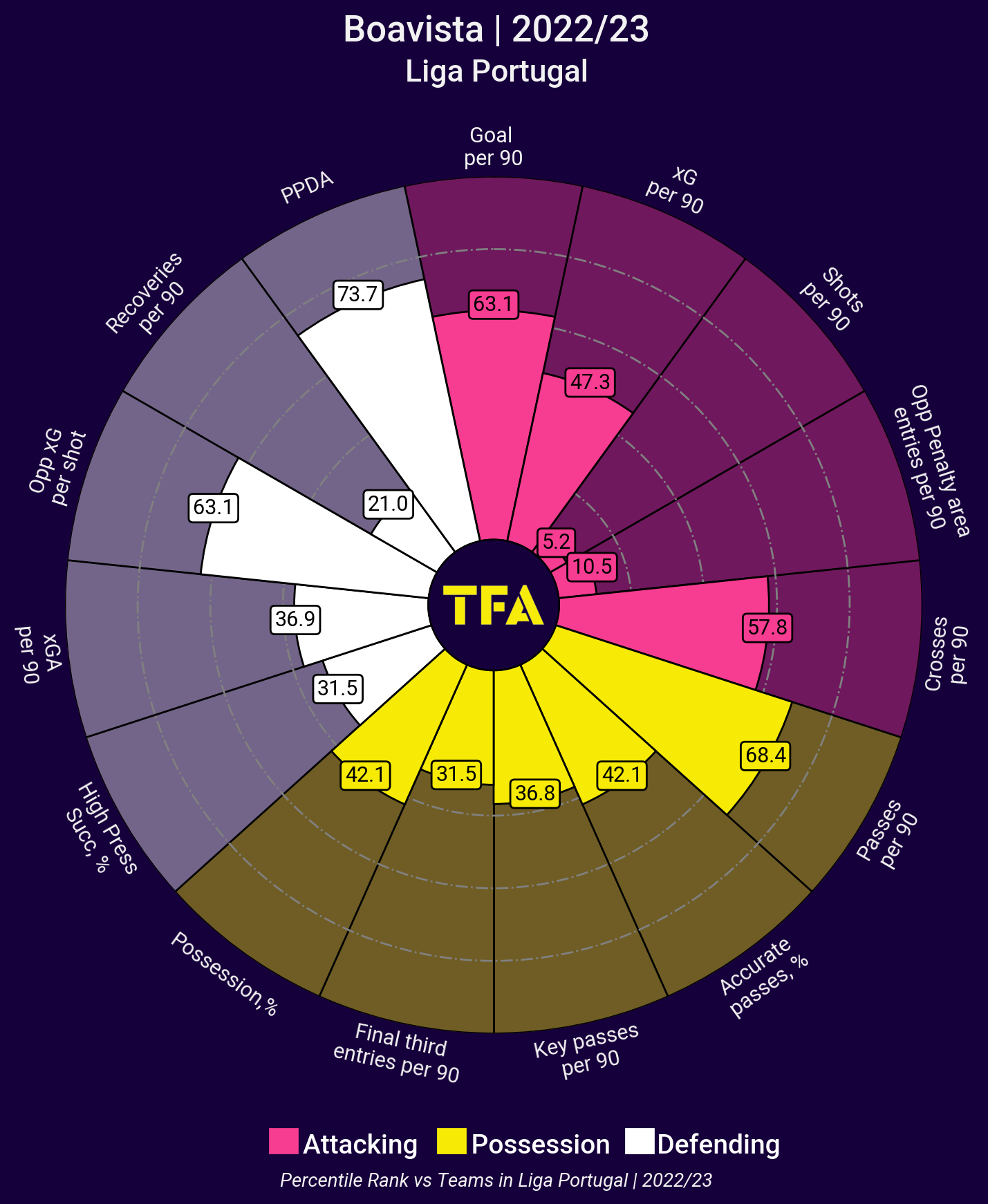 Boavista’s form has kept deteriorating as the season has progressed. Looking at the viz above, we can observe that manager Petit’s team possesses average stats overall in the attacking, possession, and defending departments. They are doing decently in terms of goals, crosses, attempted passes, opponent xG per shot, and passes per defensive action. Alternatively, they possess low figures for shots, opponent penalty area entries, recoveries, and a high press success rate. Boavista 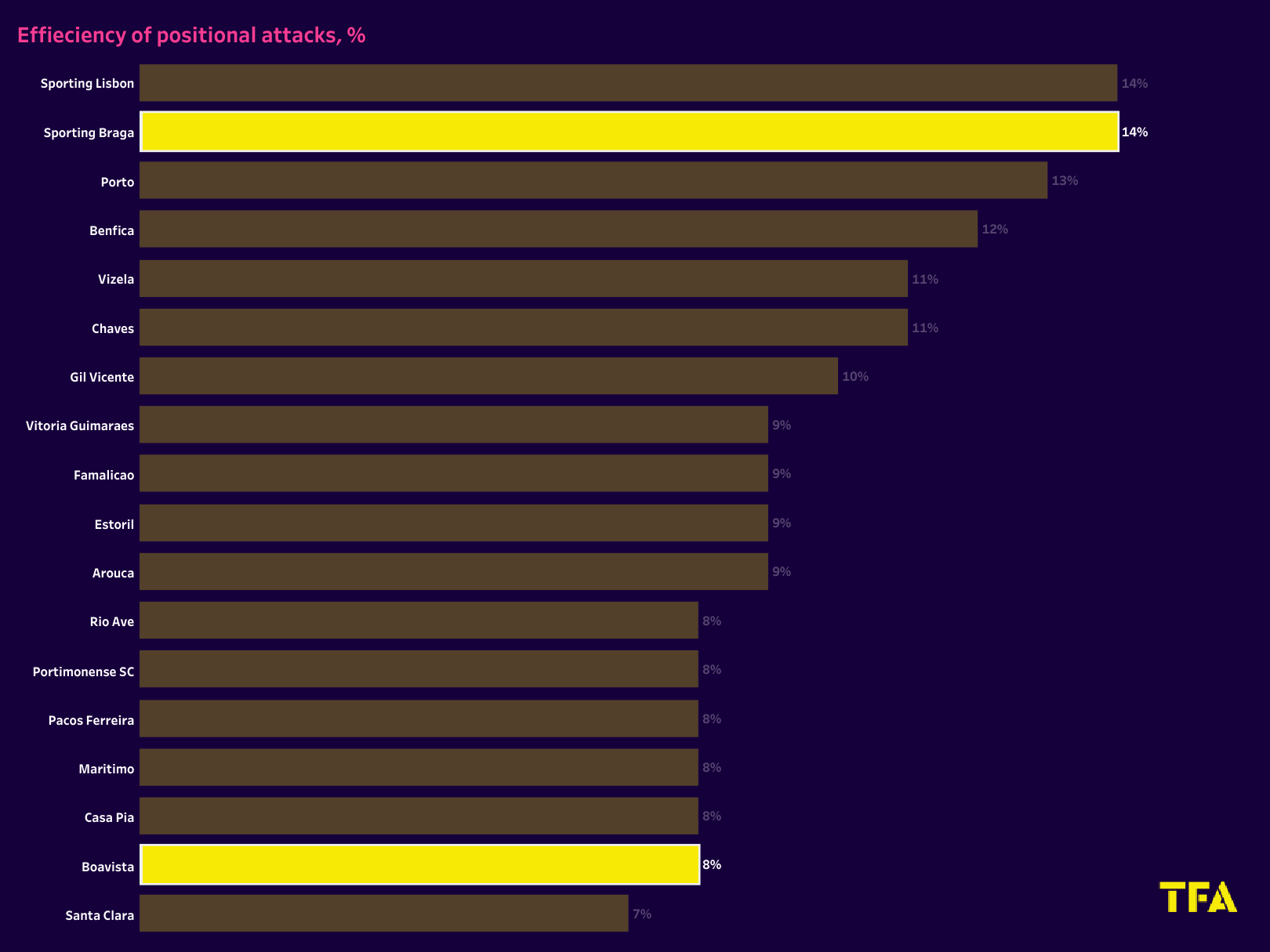 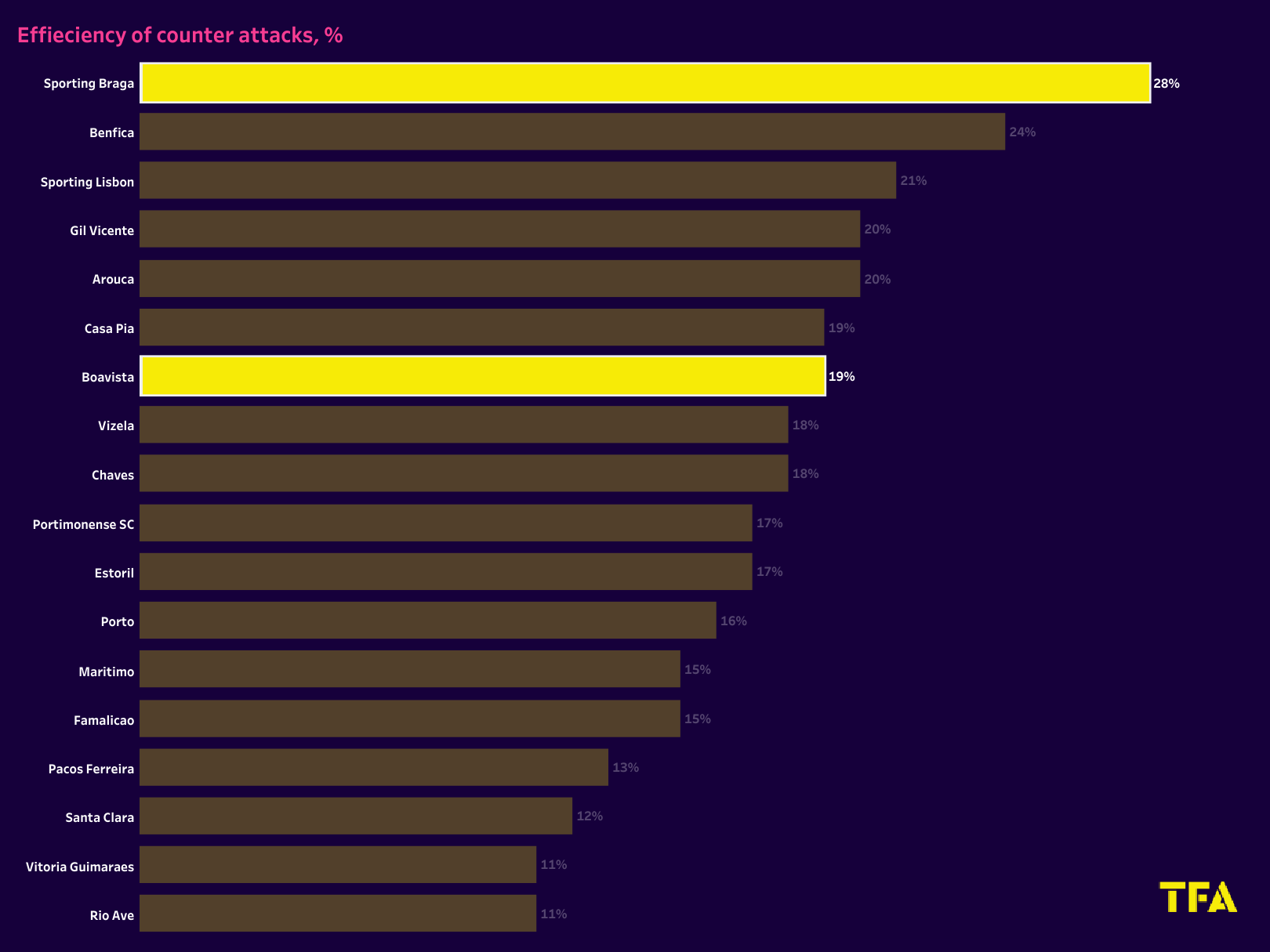 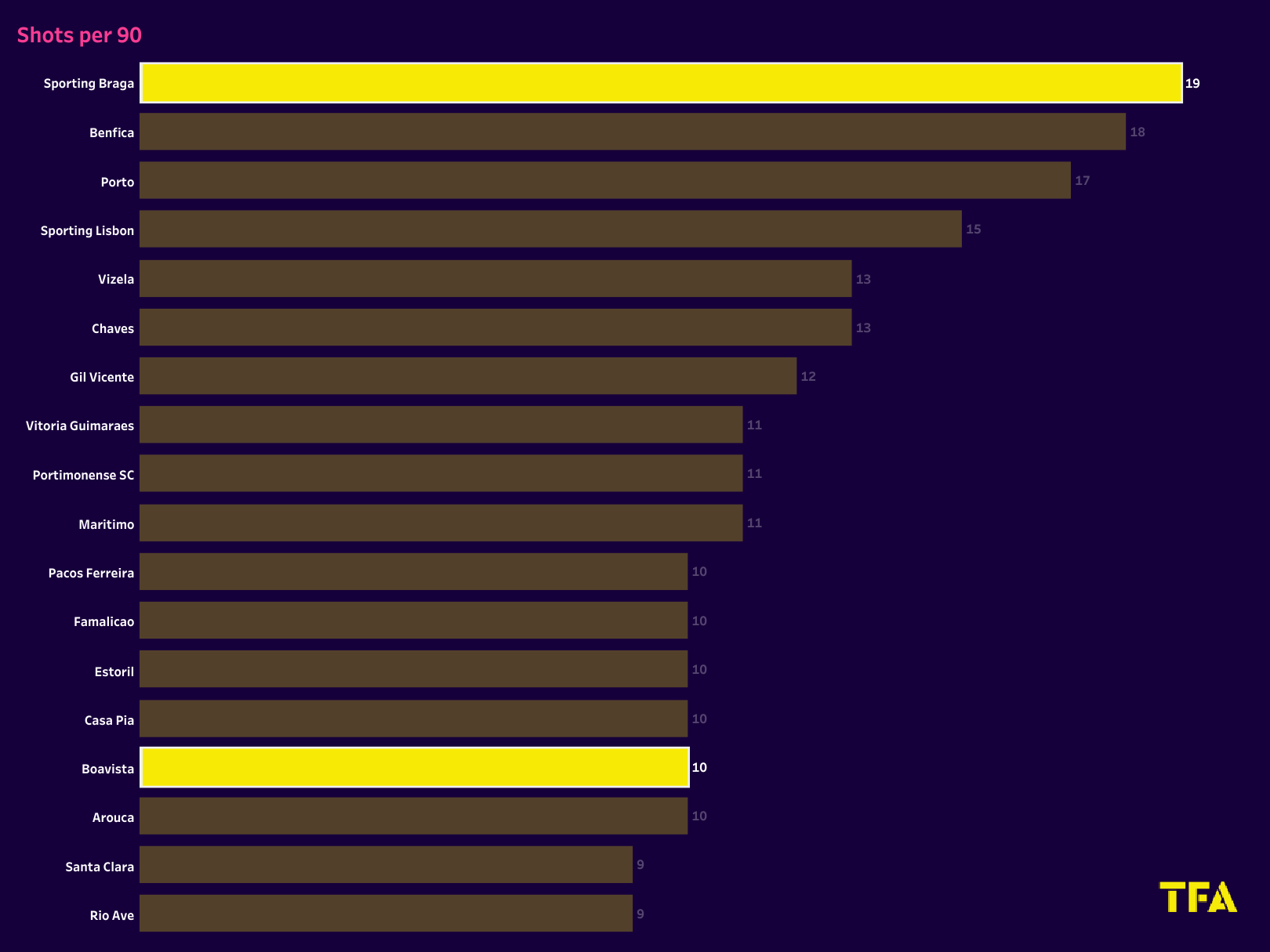 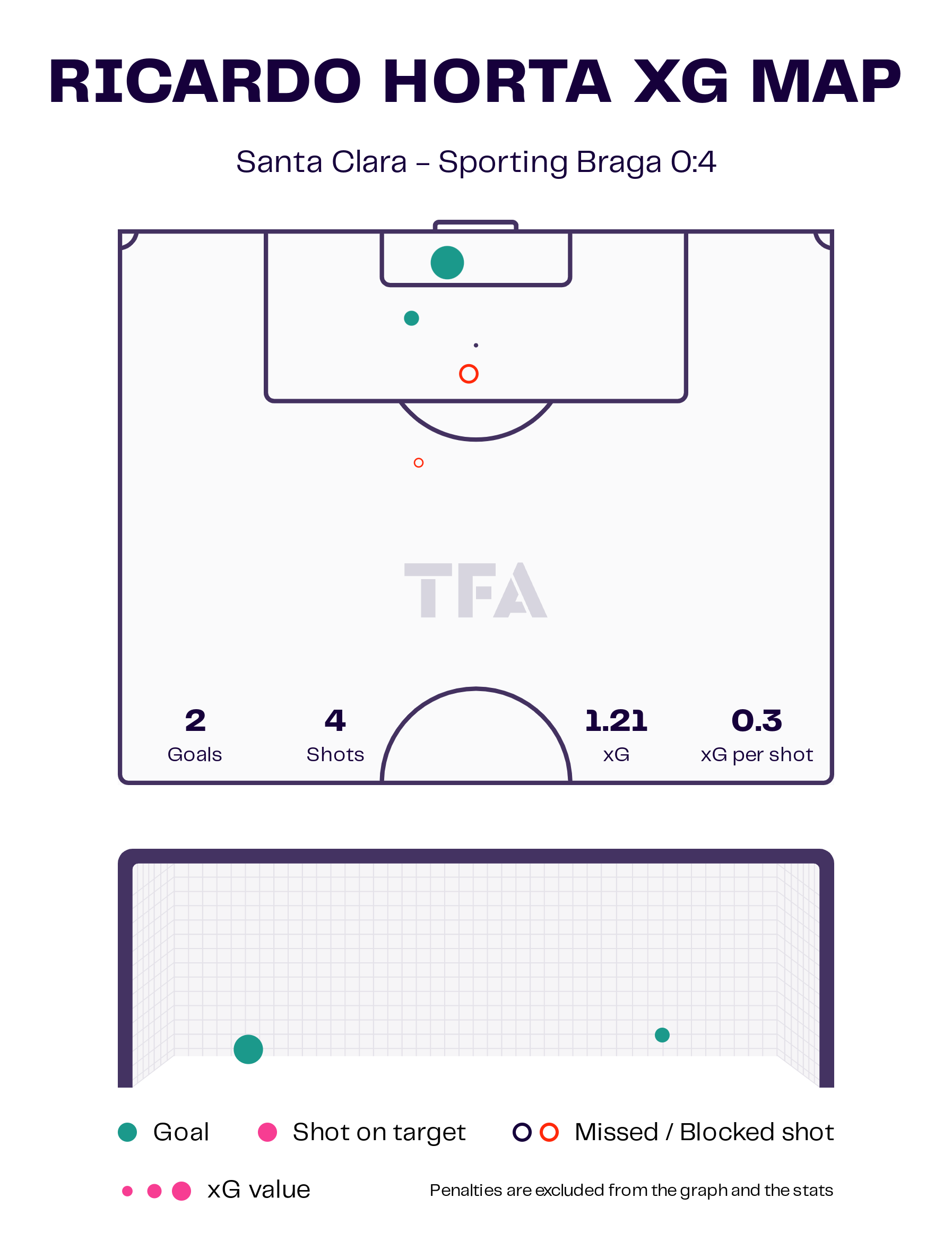 Captain Ricardo Horta has been Braga’s best player this season. He has the highest goal contribution for his team, with eight goals and five assists thus far. The 28-year-old has netted a brace in each of his last two Liga Portugal matches. He averages 3.23 shots with 42.3% accuracy and has an xG rate of 0.52 per 90 minutes. If Boavista wants to achieve a positive result in this fixture, their defenders will have to keep Ricardo Horta at bay. 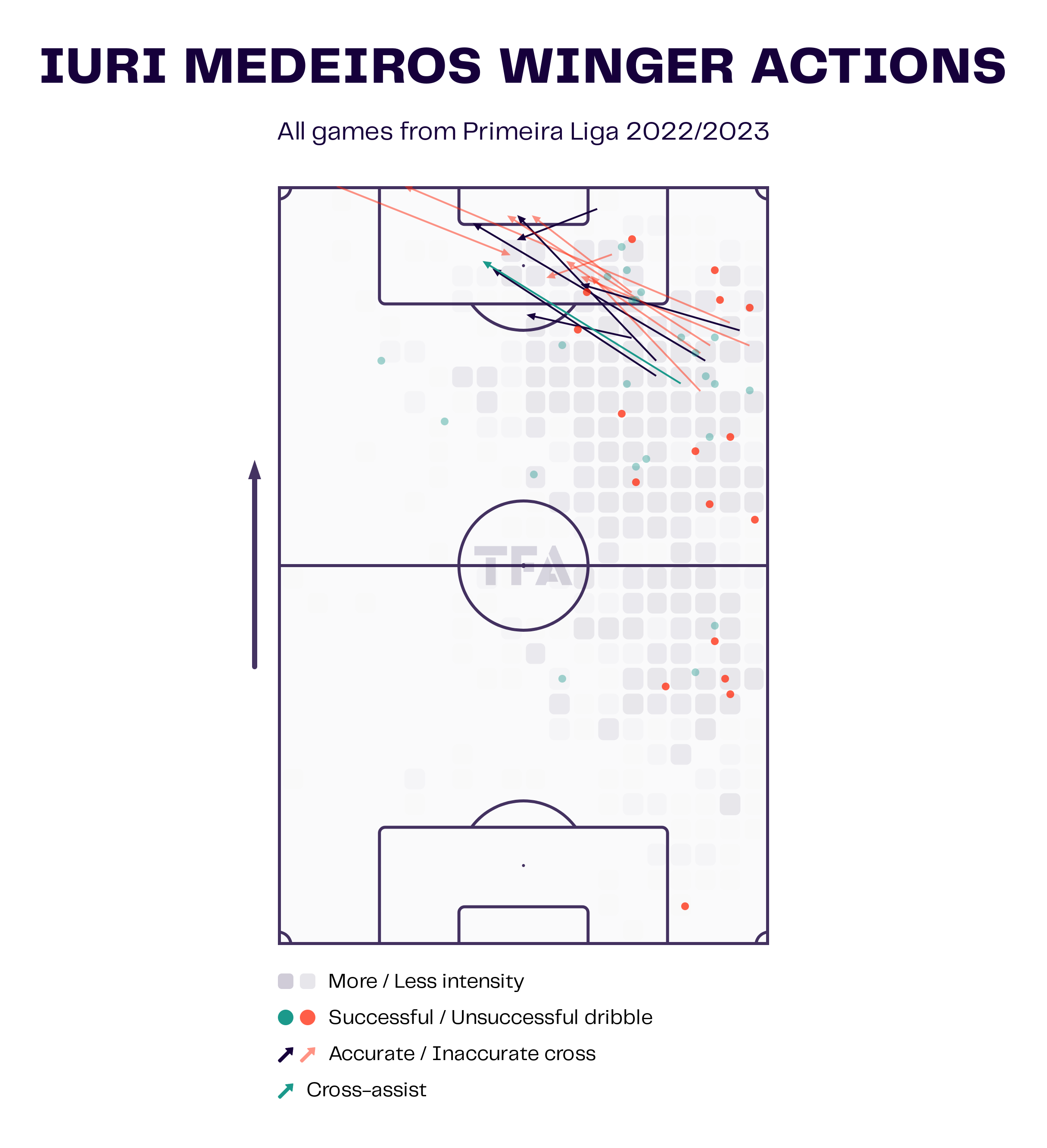 Another player who has proven paramount in Braga’s frontline is Iuri Medeiros. The 28-year-old winger has created 11 big chances this season, which is the most and averages 2.1 key passes per game. With five goals and three assists to his name, he has been a top contributor for Braga. While Boavista are aware of Medeiros’s threats, the experienced winger will be eager to increase his goal contributions further in this matchup.

Both Braga and Boavista are expected to put out a full-strength starting eleven with no known injuries or suspensions in their squad. However, Braga’s Iuri Medeiros and Vitor Tormena are at risk of facing suspension after accumulating four yellow cards. Meanwhile, Vincent Sasso, Seba Perez, Gaius Makouta, and Pedro Palheiro are the four Boavista players in a similar situation.

A win against Boavista will further consolidate Braga’s spot in the top three and mount more pressure on their rivals. They cannot afford any slip-ups due to their strong momentum and will want to collect all three points at home. Boavista, on the other hand, will be motivated to interrupt the home team’s progress and build some momentum of their own to enter the table’s upper end.