With the winter transfer window in full flow, many European clubs are looking to bolster their squads in key areas. Among them are FC Porto, who seems keen on bringing Mexican full-back Kevin Alvarez to Liga Portugal. Alvarez mainly plays as a right-back in Liga MX for Pachuca, one of the most successful clubs in the country. At 24 years of age, Kevin Alvarez has established himself as a regular and pivotal part of Pachuca’s first team. The young right-back also played at the World Cup in Qatar and made two appearances for Mexico. Let’s now look at some stats to comprehend why Kevin Alvarez is luring interest from a top Liga Portugal side, Porto. 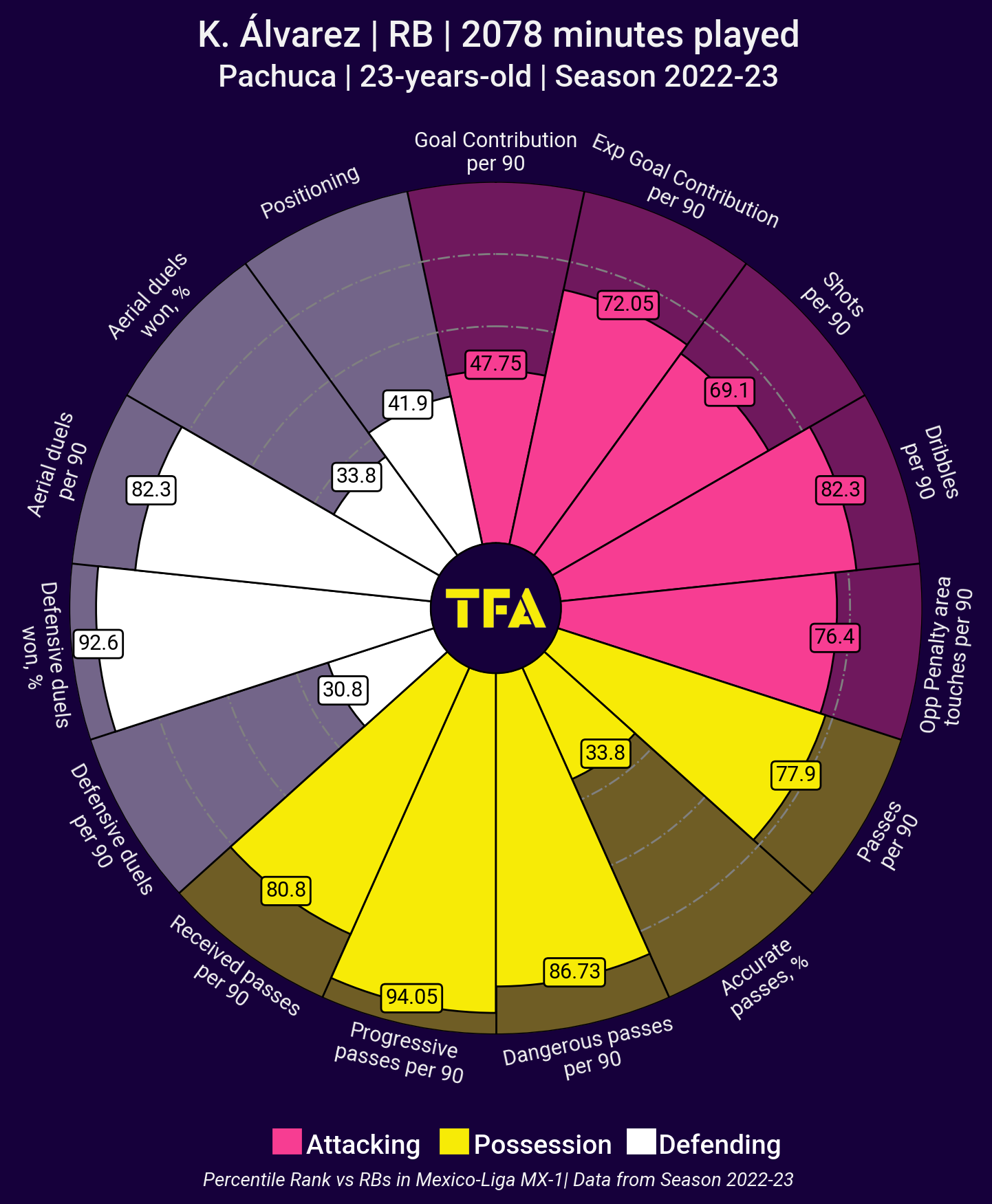 Kevin Alvarez has played 24 matches for Pachuca in Liga MX 2022/23. He is a regular member of the starting eleven and has provided five assists and scored one goal. The above viz shows the percentile rank of the player’s stats in comparison to the other players featured as right-backs in Liga MX. We can observe that Ramon possesses an excellent rank for metrics like progressive passes, dangerous passes, defensive duels, aerial duels, and dribbles. Meanwhile, the player possesses good stats under metrics such as expected goal contribution, penalty area touches, received passes, and shots. 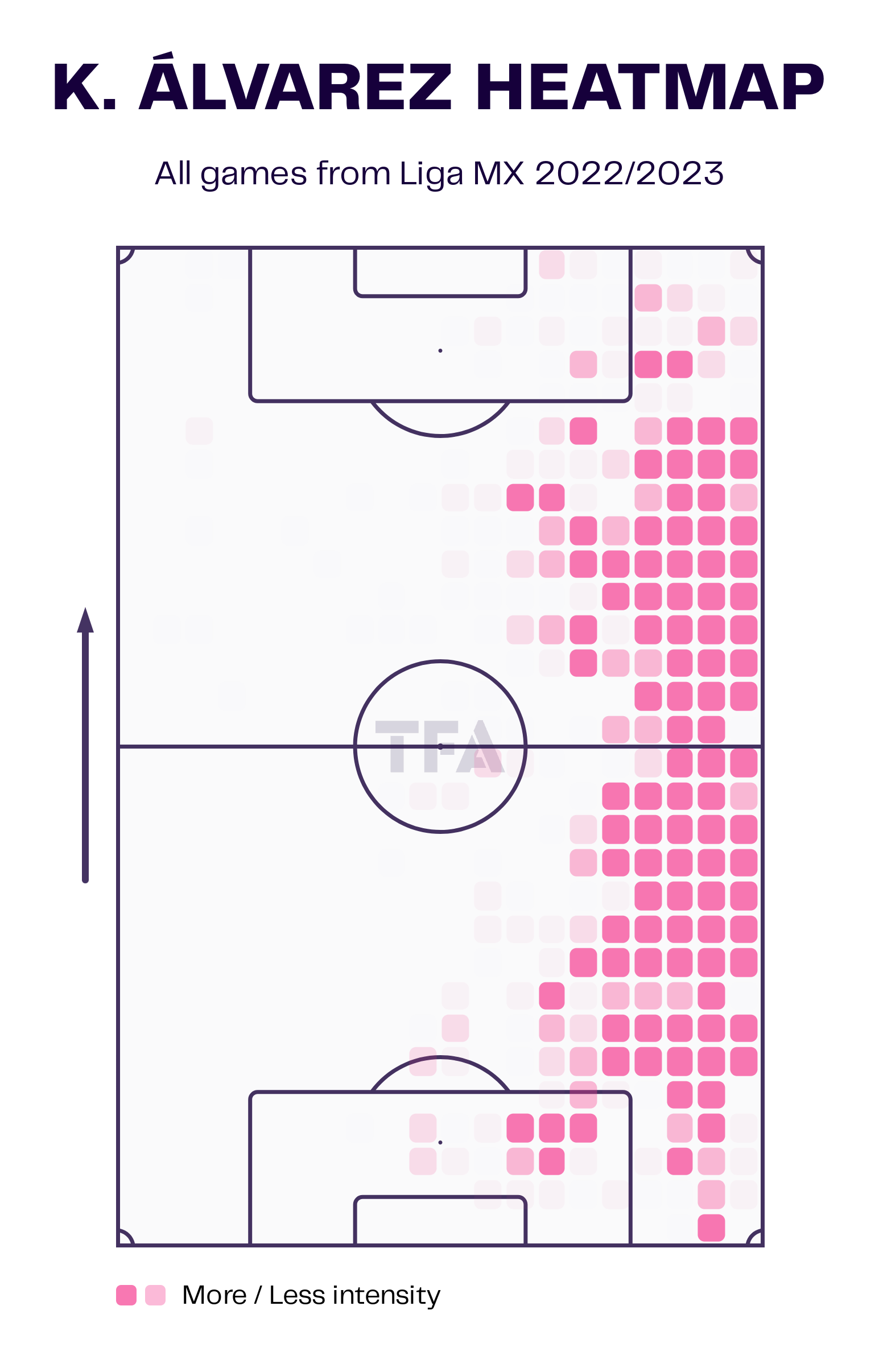 While Alvarez is primarily a right-back, based on the needs of the team, he can also slot in as a left-back. The viz above shows the player’s heat map from the current season. We can observe that Kevin Alvarez displays high intensity throughout his right flank. He moves up and down the pitch and covers a lot of ground on the right side. He averages 0.72 shots per match with 15.8% accuracy and 36.31 passes with a decent accuracy of 77.7%. Additionally, he makes 5.59 passes to the final third and 2.9 passes to the penalty area per match. 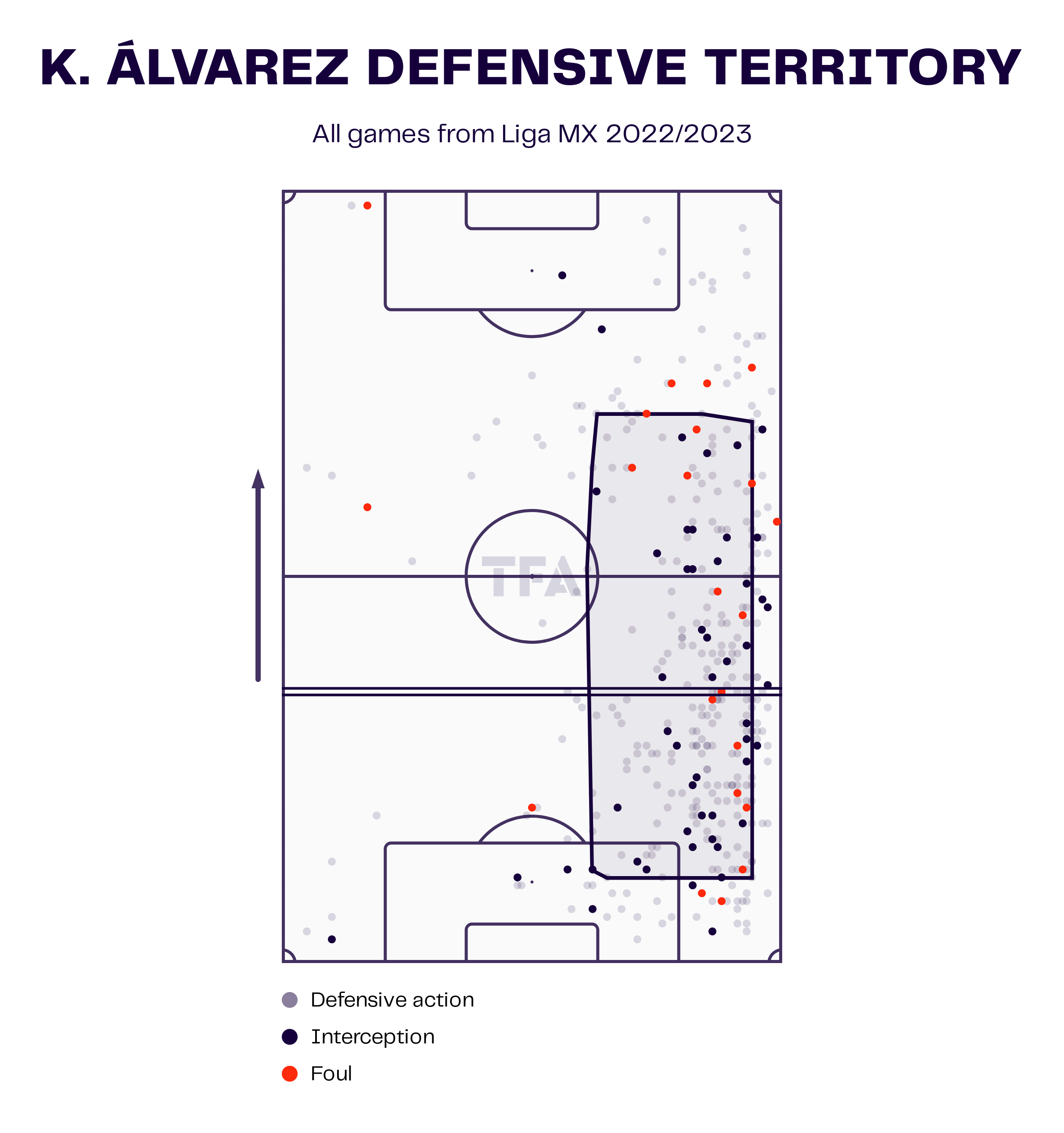 As a right-back, Kevin Alvarez’s defensive gameplay is his strong suit. From the viz above we can see that his average position along the defensive line is well within his own half. The 24-year-old fullback makes 8.14 recoveries and 4.03 interceptions per match. In addition to that, he commits 1.03 clearances per 90 minutes. Furthermore, he contests 6.5 defensive duels with a high success rate of 70.2%. As for aerial duels, the right-back attempts 3.04 such contests per match with a 42.5% win rate. 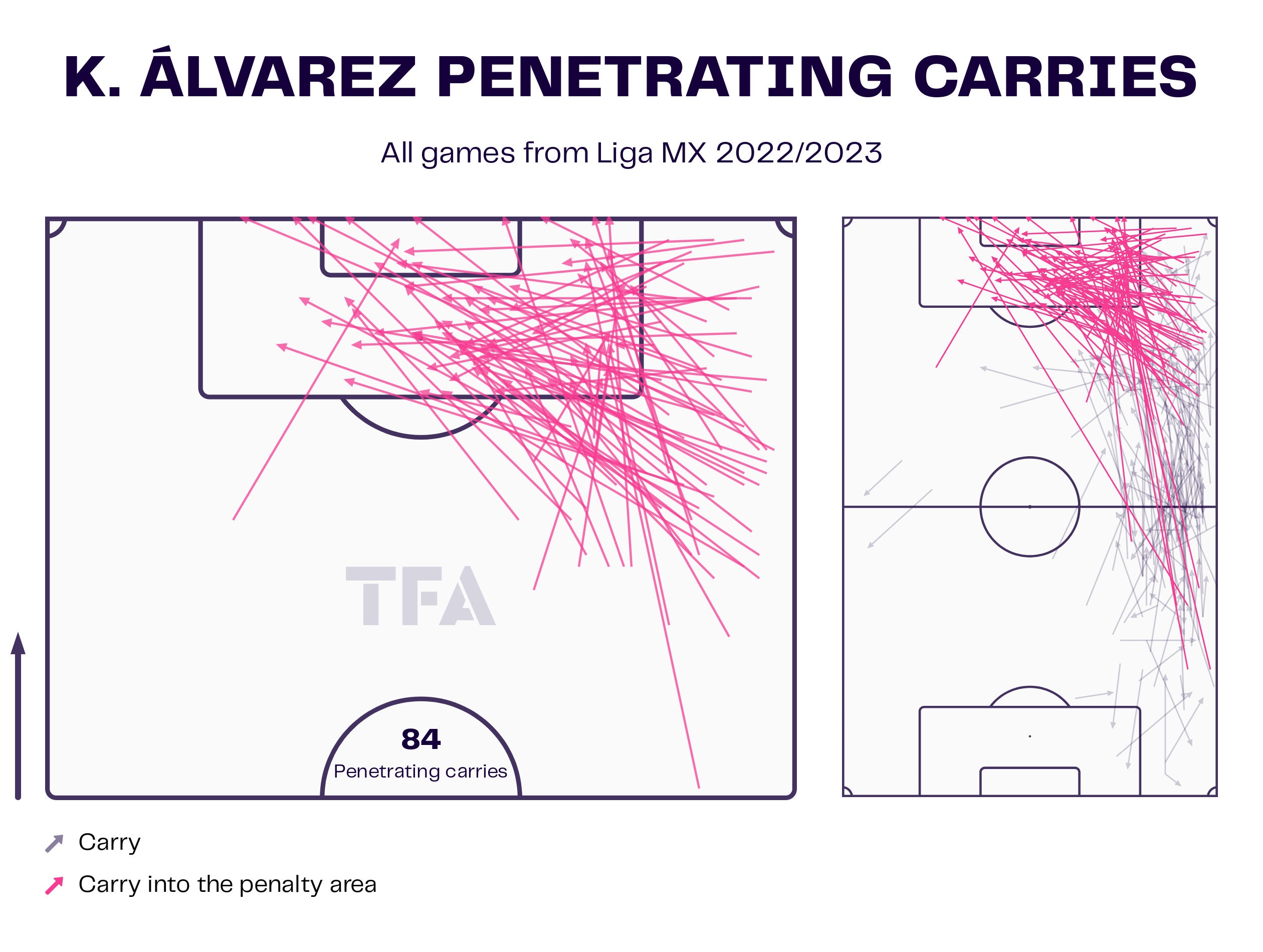 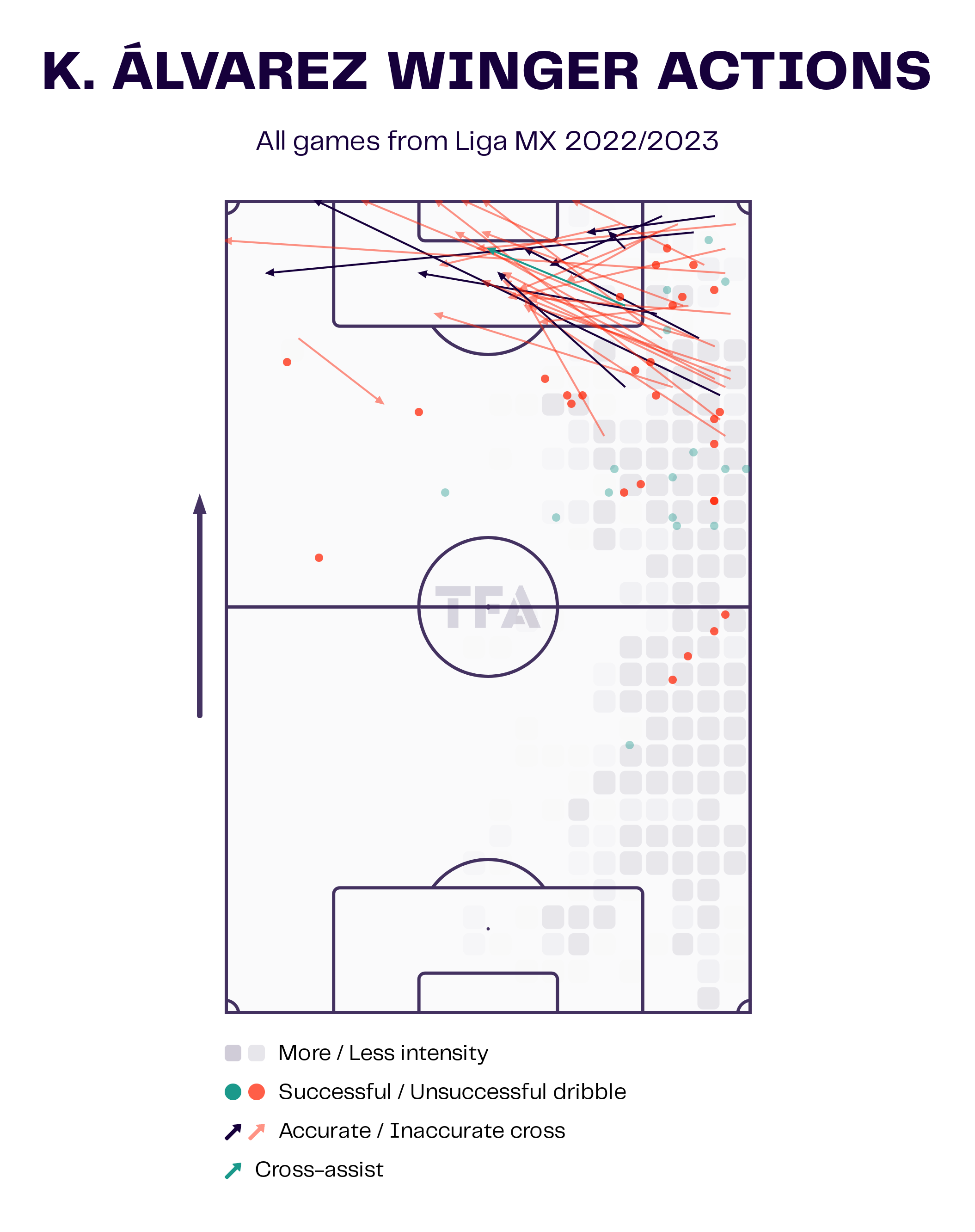 The two visuals above highlight Alvarez’s offensive and creative characteristics. He constantly moves up and down the flank with his speed. He is also capable of making penetrating carries into the penalty box, with 84 such instances seen in the current season. The 24-year-old also has the ability to take on players and whip crosses into the box. Currently, he attempts 3.08 dribbles and 2.74 crosses per match on average. Furthermore, he makes around 2.43 progressive runs per match while averaging 1.18 touches in the penalty box.

What could be Kevin Alvarez’s role at Porto?

If Porto decides to move for Kevin Alvarez, the Portuguese team could bring in the Mexican as a backup option for the 23-year-old Joao Mario, who plays at right back. Otherwise, he could replace full-backs like Wilson Manafa and Nanu, who assume the role of squad players currently. Alvarez could also be a starting option on Porto’s defensive line, adding depth and quality to the team. 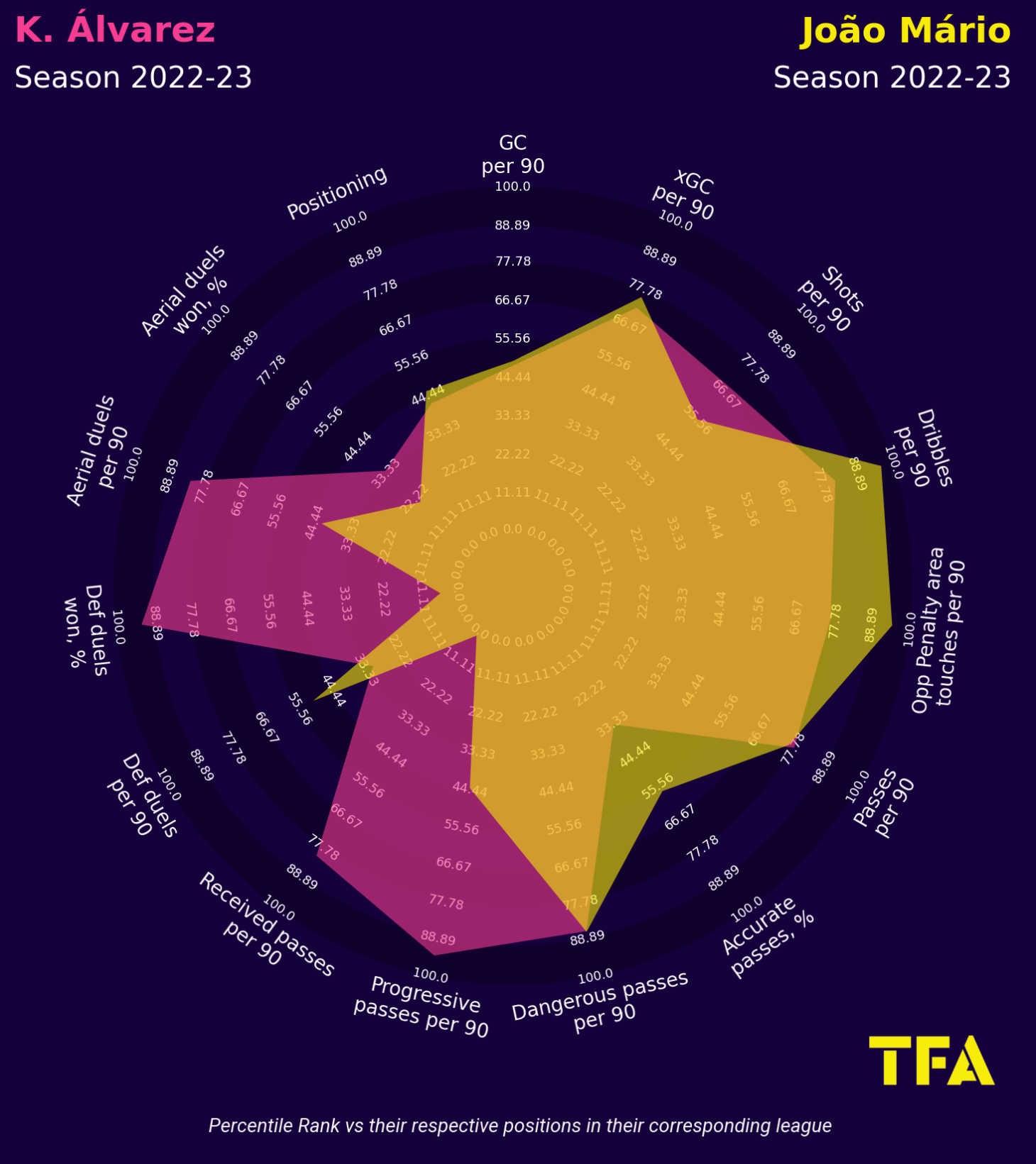 The viz above compares the performances of Kevin Alvarez and Joao Mario in their respective leagues. It can be observed that both players outperform each other in a few areas. Alvarez has better stats for, shots, progressive passes, received passes, aerial duels attempted, and defensive duels win rate. Compared to his counterpart, Joao Mario has made 11 Liga Portugal appearances, providing three assists and scoring one goal. With defensive prowess and experience on his side, Kevin Alvarez could ensure himself a starting role at Porto if the club decides to sign him in the January transfer window.

Kevin Alvarez can certainly move to Liga Portugal for the next step in his career. FC Porto is one of the potential destinations for the budding right-back, who has demonstrated the abilities of a reliable defender as well as creativity. He could evolve into a regular member of the Porto team and develop into his full potential, should the club decide to sign him.