The 2022/23 winter transfer window will commence soon as clubs around the globe will look to bolster their squads. J1 League side Kashima Antlers recently announced the transfer of midfielder Kento Misao to Santa Clara in Liga Portugal. The 26-year-old will follow in the footsteps of fellow Japanese defensive midfielder, Hidemasa Morita, who played for Santa Clara before moving to Sporting CP this summer. A product of second-division Tokyo Verdy’s youth setup, Misao joined Antlers in 2016. He made 181 appearances in the Japanese top division, scoring four goals and winning three major trophies with the club. We now look at some of the stats to understand why Portuguese top-flight side Santa Clara were so eager to sign the Japanese national. 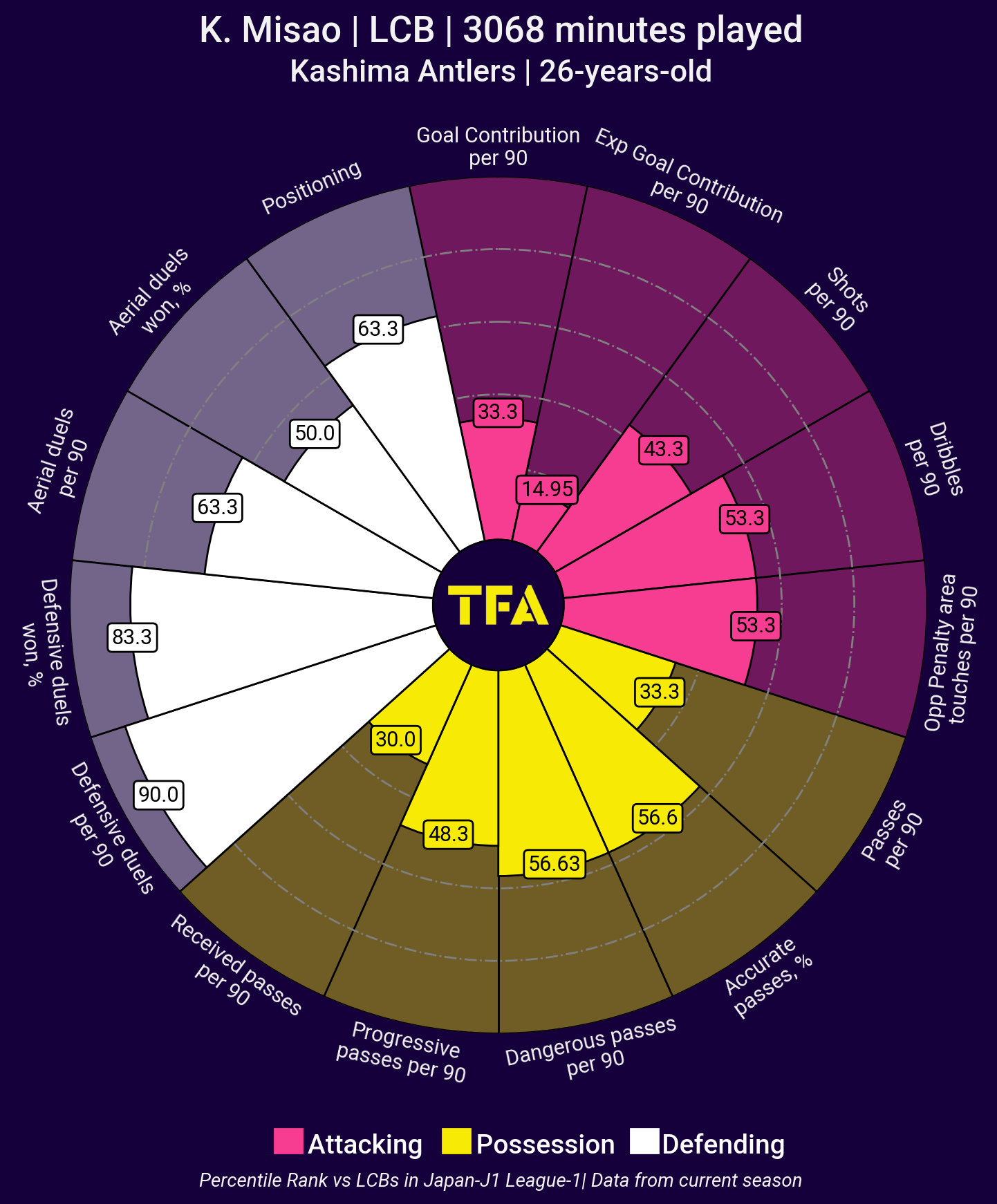 Kento Misao made 33 appearances for the Kashima Antlers in J1 League 2022, scoring two goals. He is considered a versatile midfielder with greater defensive proficiency, but he can also play more advanced roles in the midfield. The viz above shows the attacking, possession, and defensive stats of the player from this season in comparison to other defensive midfielders. His high percentile rank in metrics like defensive and aerial duels is a clear indication of his defensive prowess. His stats are also decent in areas like passing and progressing the ball forward. 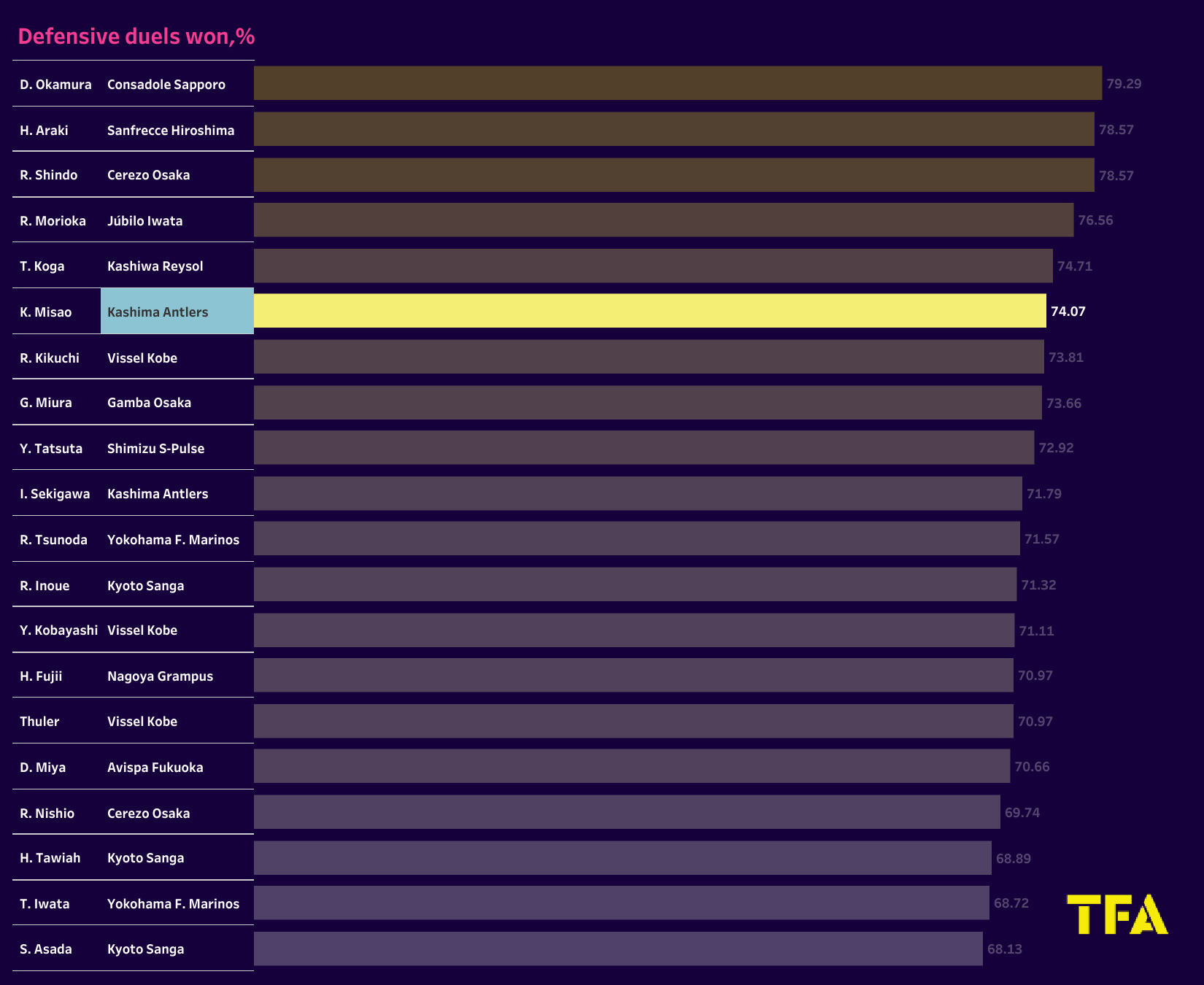 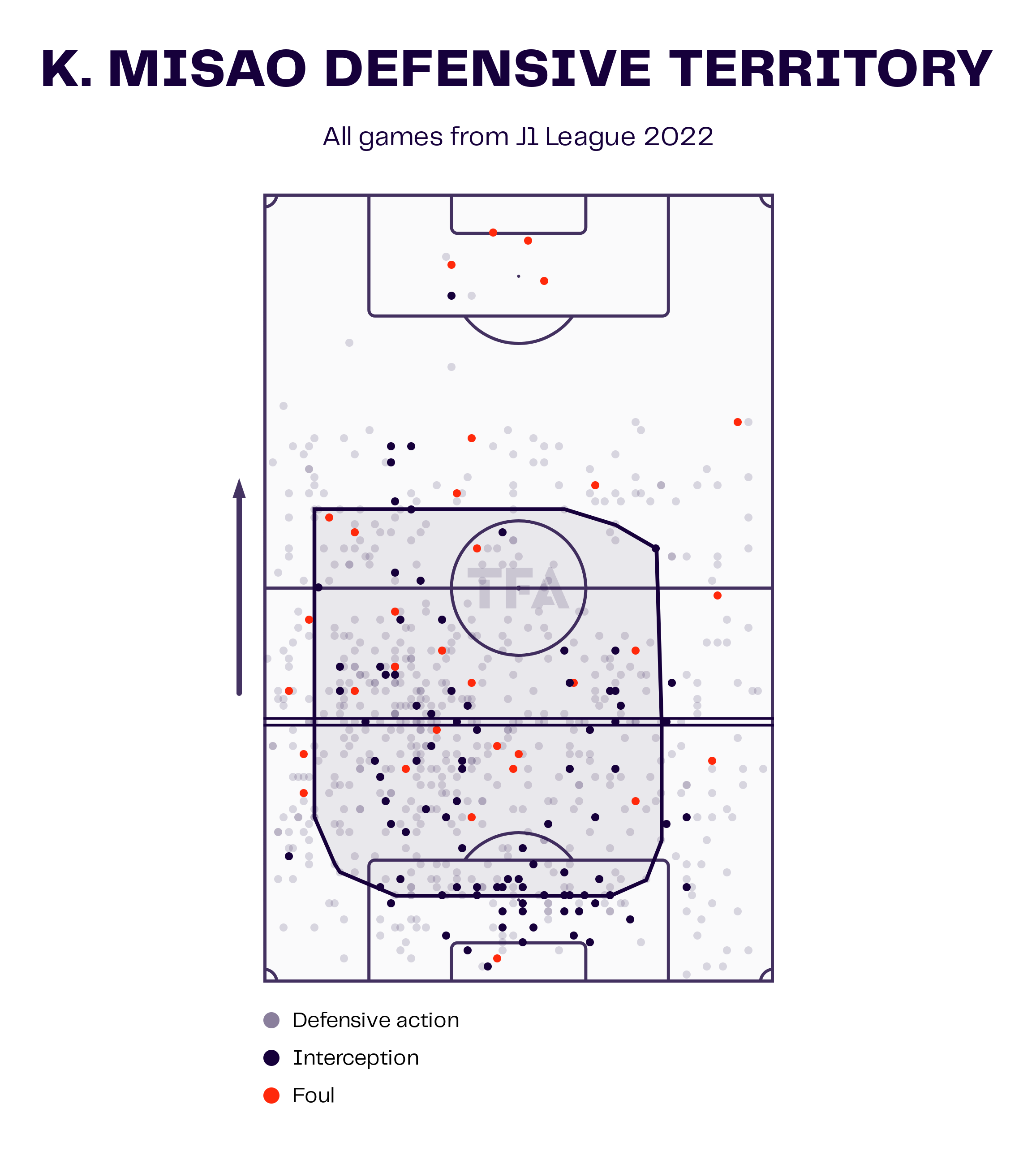 A right-footed player, Misao usually plays at the heart of the central midfield as the holding midfielder. The visuals above depict the relevant rankings of similar players by defensive duels won and also the average area of the defensive engagements performed by the player in focus. With above 74% of defensive duels won, Misao ranks highly in terms of the metric among other defensive midfielders.

In the 33 games he played this season, he made 92 blocks, the most among the Antlers and the second-most in the league. His average of 1.9 interceptions and 2.42 tackles per game were also the highest for his team. He wins an impressive 6.0 ground duels and 2.5 aerial duels per 90 minutes, contributing to the team keeping clean sheets. Averaging 0.9 fouls per match and four yellow cards throughout the season, he is also someone who maintains discipline on the pitch. 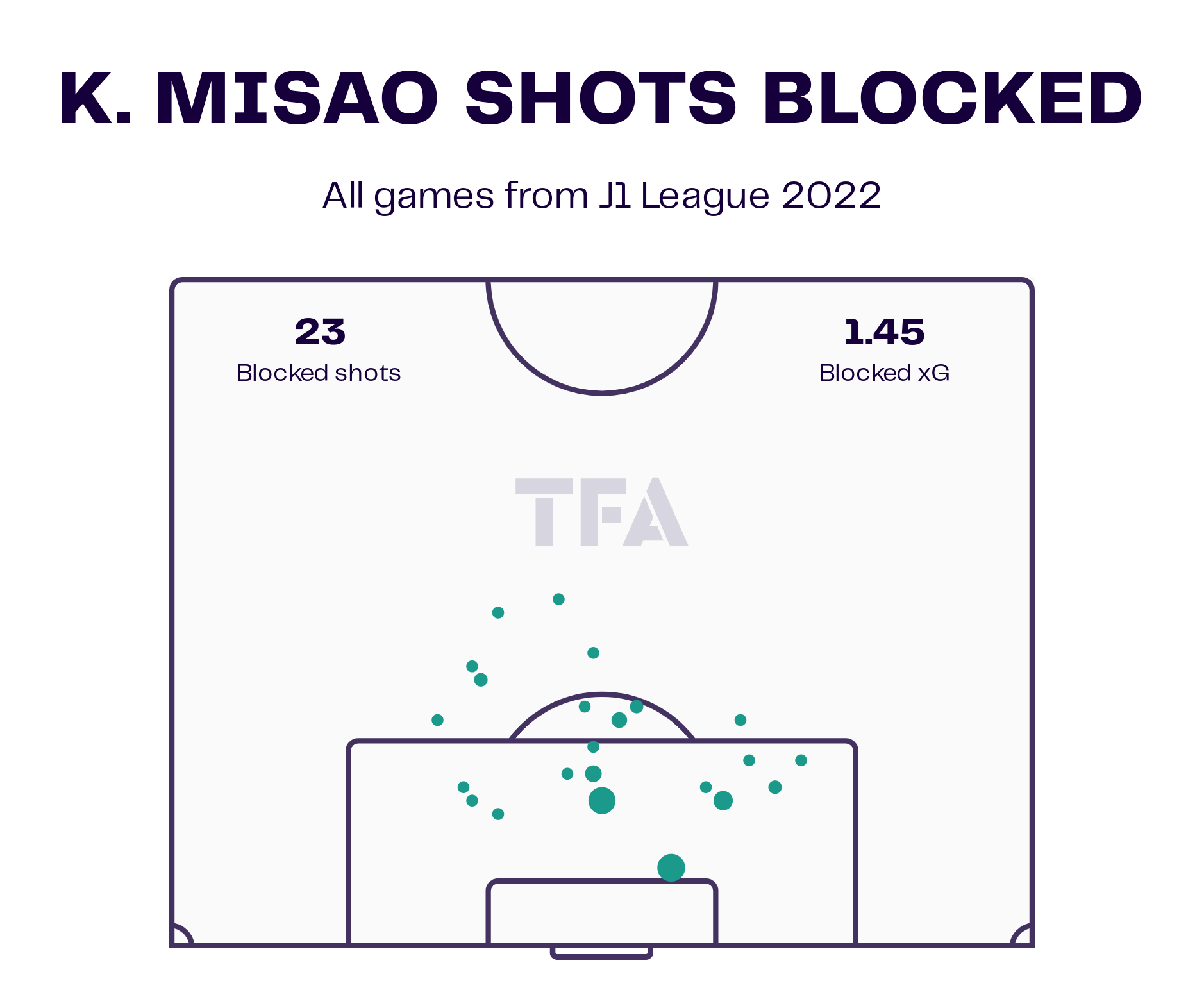 Kento Misao has also been crucial in denying the opposition goal-scoring chances. He has put his body on the line to block 23 shots. With a 1.45 xG of these shots, a good chunk of the blocks were inside his own penalty area, including a crucial one at the edge of the 6-yard box. This shows the player’s dedication to working hard and helping his team get results.

Who could Kento Misao replace at Santa Clara? 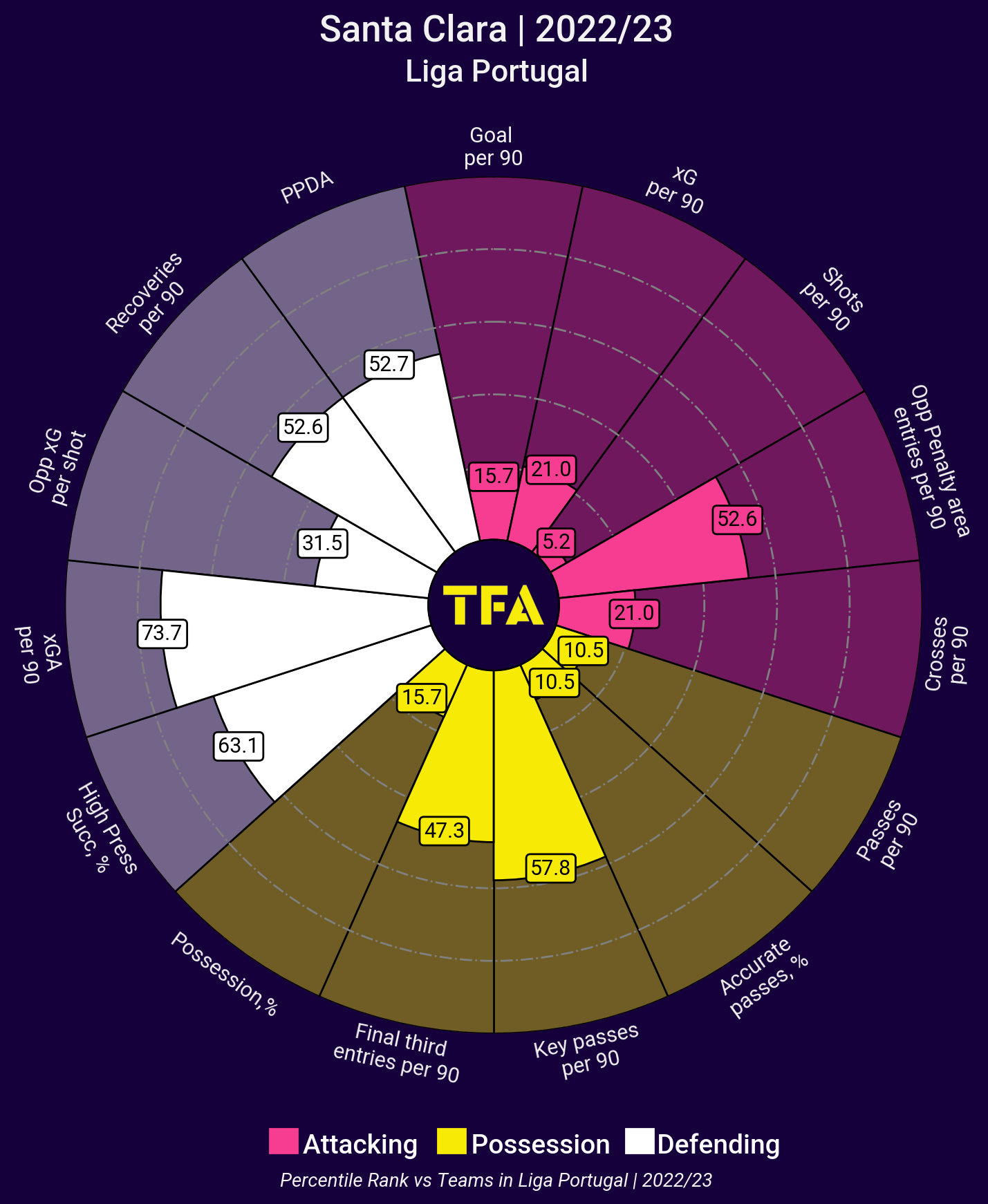 Santa Clara are currently experiencing a difficult and disappointing season as they sit 14th in Liga Portugal after 13 matches. They have only managed to win three matches, drawing four and losing six. They have also let in more goals (13) than they have scored (11). After the departure of Hidemasa Morita, they are in dire need of an experienced centre-defensive midfielder in their mid-season push to finish in the top half. 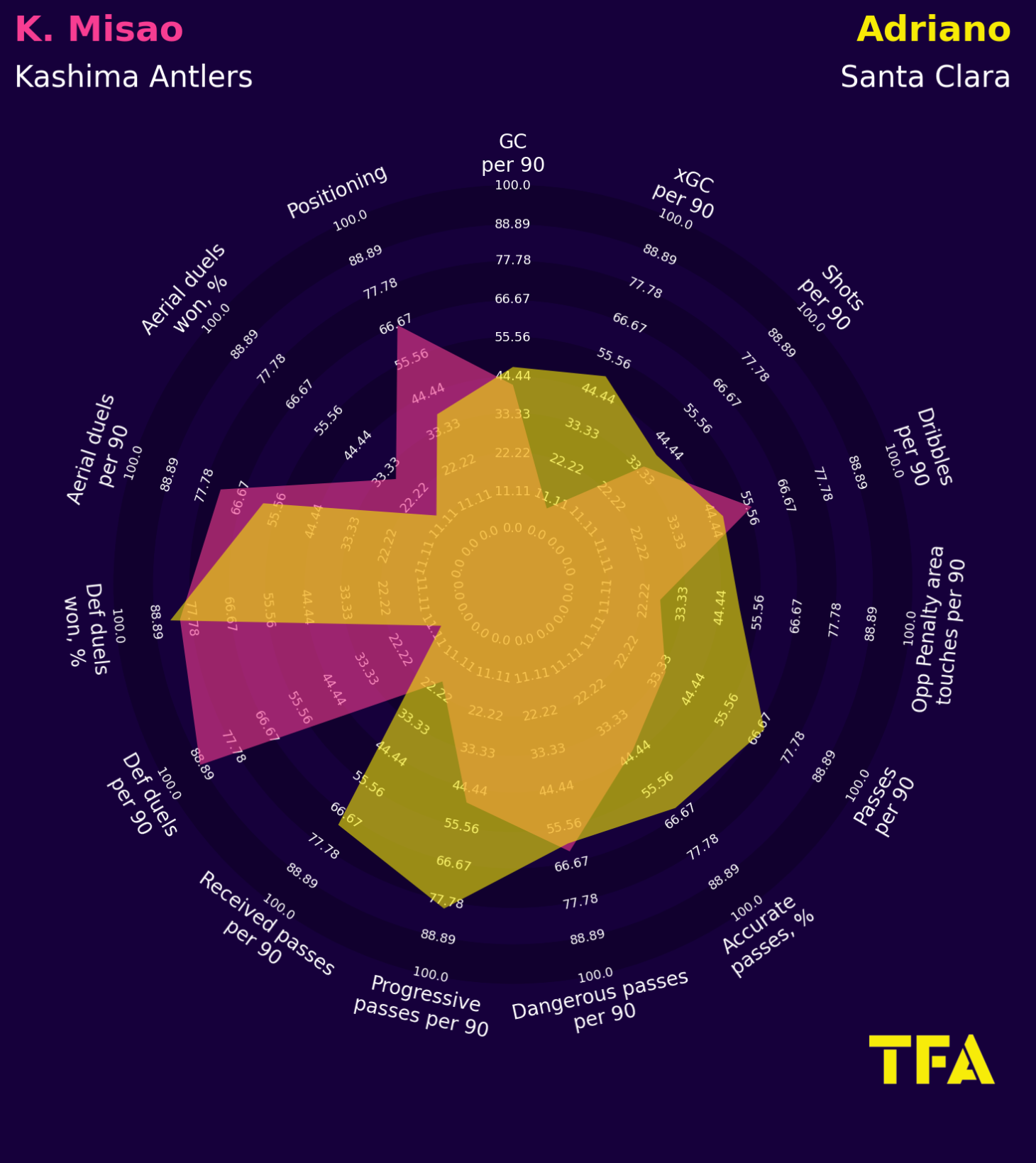 One player Kento Misao could replace at Santa Clara is defensive midfielder Adriano. The viz above compares the performance of the two players in their respective leagues. The contrast, particularly in terms of the defensive stats between the players, is apparent. The 22-year-old Brazilian currently makes 1.76 tackles, 1.47 blocks, and 1.03 interceptions per match in Liga Portugal. These are diminishing numbers compared to what his 26-year-old Japanese counterpart currently averages, even though the Brazilian has other attributes to his game. The addition of Misao brings more talent, depth, and experience to the heart of Santa Clara’s midfield.

In conclusion, Kento Misao is a physically strong and versatile centre midfielder. At 26 years of age, he has a lot of experience playing in the competitive environment of a top-division league. Capable of playing as the sole defensive midfielder, he is defensively solid and adept at reading the game. He also possesses decent passing and ball-progression attributes. Santa Clara will be hoping for the same levels of consistency from him as they look to bring their Liga Portugal 2022–23 campaign back on track.