Joao Mario is enjoying one of his best seasons with Benfica in Liga Portugal. The veteran midfielder has years of experience playing for various clubs across Europe, like Sporting CP, West Ham United, and Inter Milan. But it is with Portuguese giants Benfica that he has developed into one of Liga Portugal’s stars.

The 29-year-old has already scored six goals and provided three assists in 12 league appearances for the Eagles this season. He also put on some stellar displays in the UEFA Champions League 2022–23. His four goals and one assist helped Benfica qualify for the knockout stages as group winners ahead of PSG and Juventus. Let’s now delve into some stats that capture the wonderful season Joao Mario is having. 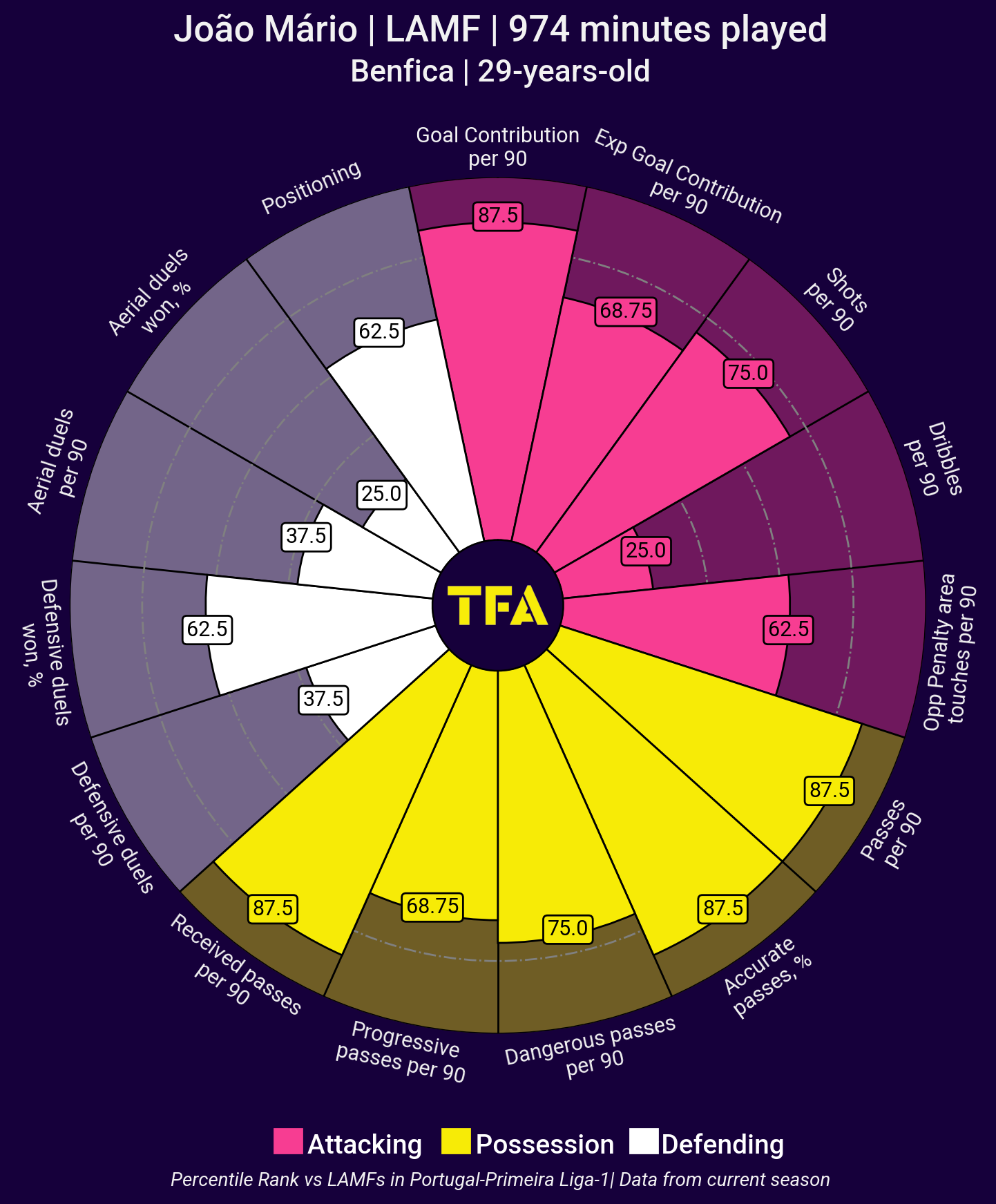 The above viz shows the percentile rank of the player’s stats against other players featured as left-attacking midfielders in Liga Portugal 2022/23. Joao Mario possesses excellent attacking and possession stats across most parameters. He ranks in the top 87.5 percentile for goal contributions per 90 and the top 75.0 percentile for shots per 90. For passes, accurate passes, and received passes per 90 minutes, he again ranks in the top 87.5 percentile. Joao Mario also possesses decent defensive stats in areas like positioning and winning defensive duels, with a percentile rank of 62.5. 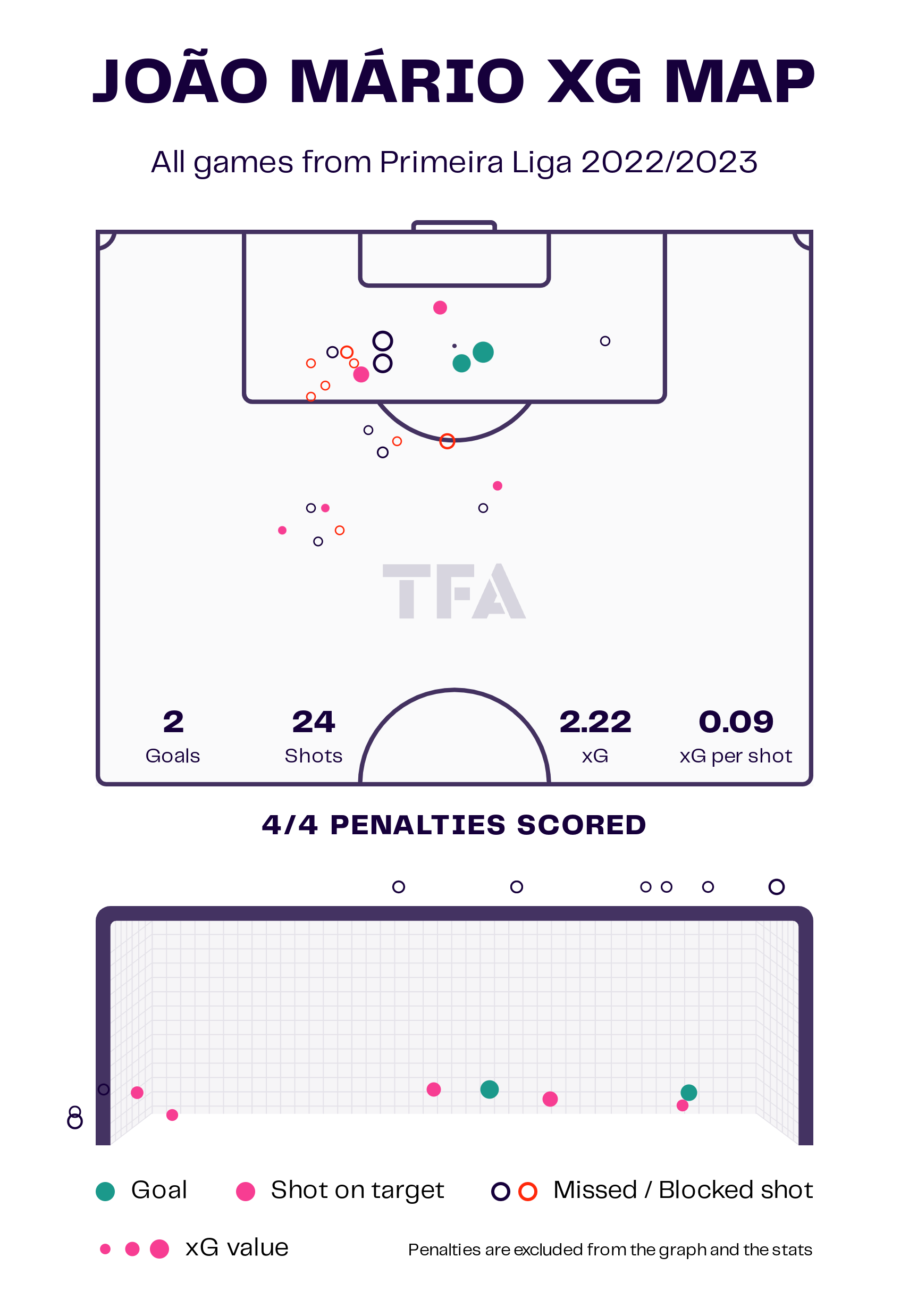 Joao Mario is not usually known for getting goals. However, the attacking midfielder is relishing his newly-discovered scoring touch this season. The above viz depicts Joao Mario’s shot map in Liga Portugal 2022/23. We can observe that he takes his shots from the left side of the pitch, and the majority of them are from inside the penalty box. All six of his goals, including four penalties, have come from inside the box. His 100% penalty conversion rate further demonstrates his composure in front of the goal. 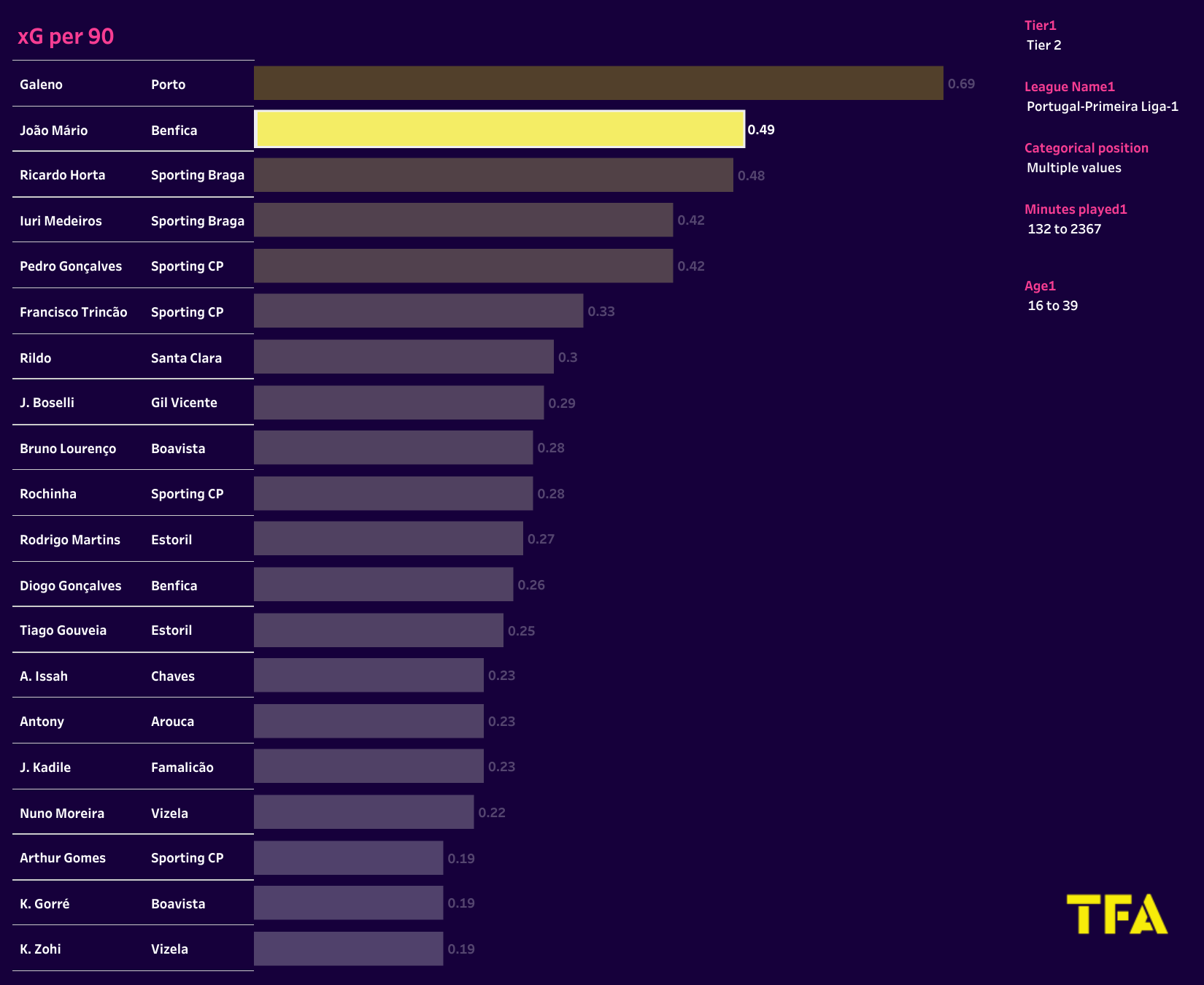 Joao Mario has taken a total of 25 shots for an average of 2.5 per match with 24% accuracy. His expected goals per match equate to 0.49, which is among the highest in comparison to players featuring in a similar position as him. 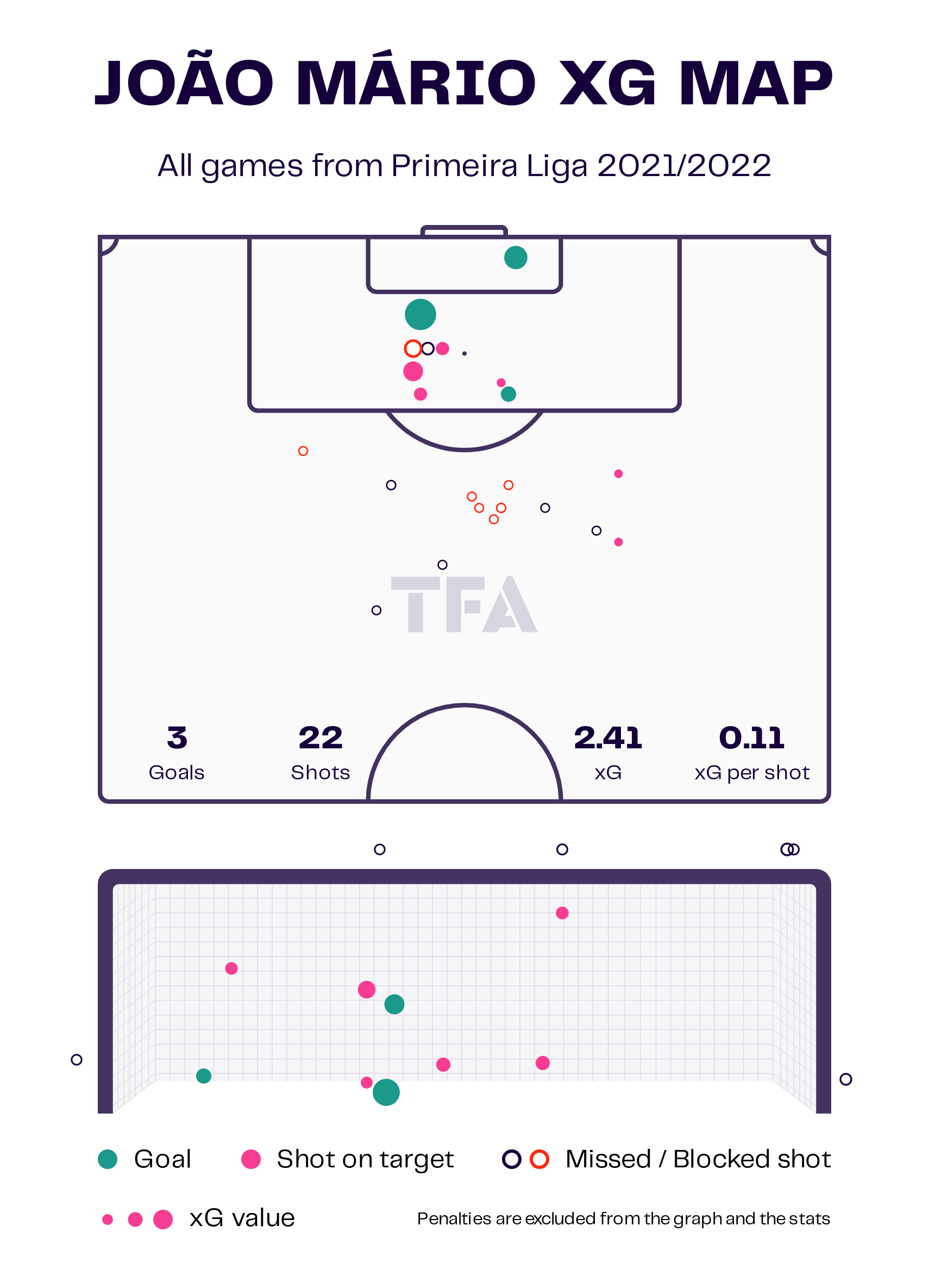 When compared to last season, Joao Mario made 28 appearances in the league, scoring three goals along with three assists. He was clocking a lot fewer shots per game (0.9) with a higher accuracy of around 41%. Most of his shots were from outside the box and from central areas far away from the goal. The attacking midfielder is on course to extend his goal contribution tally in spectacular fashion and set a new personal best. 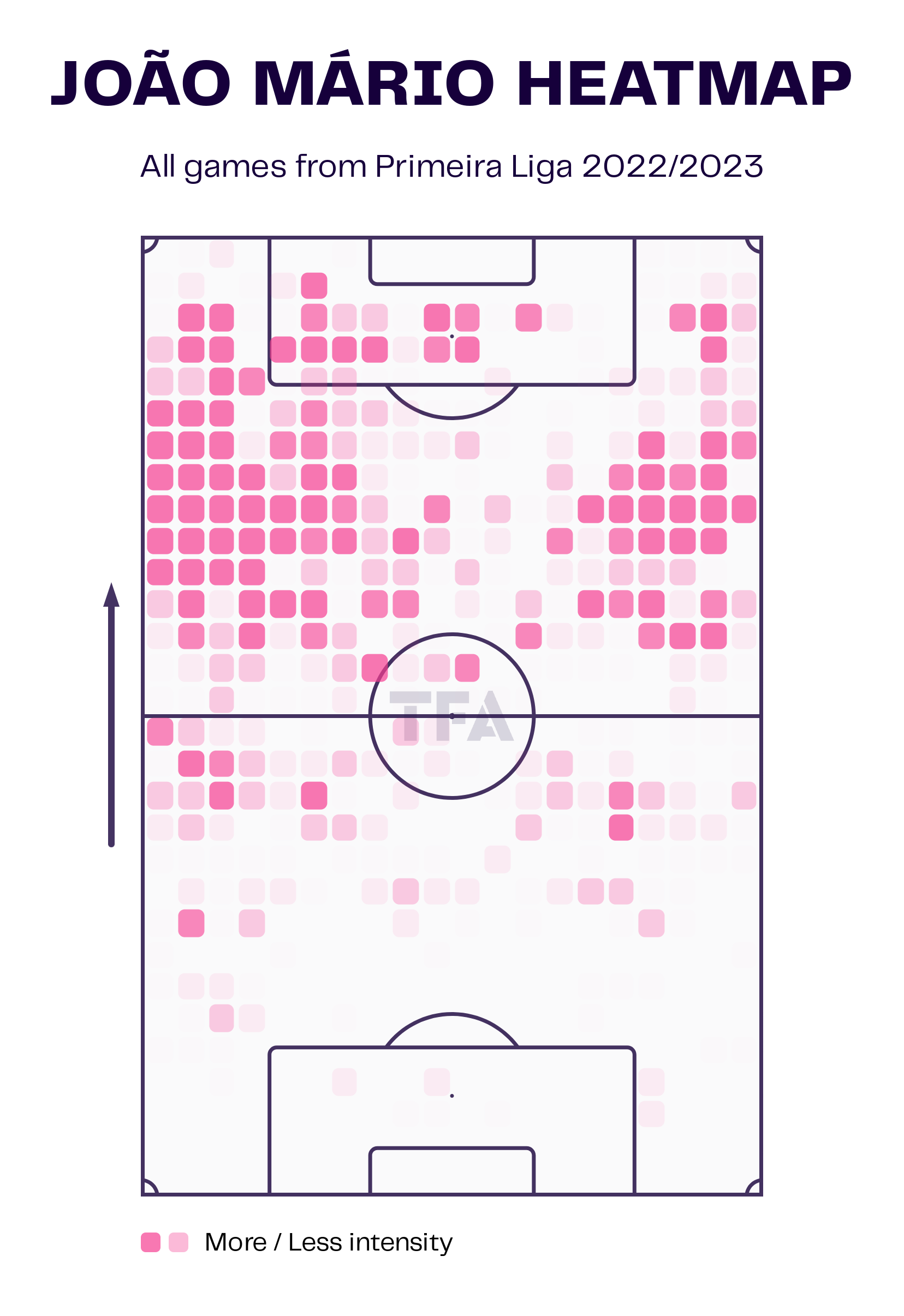 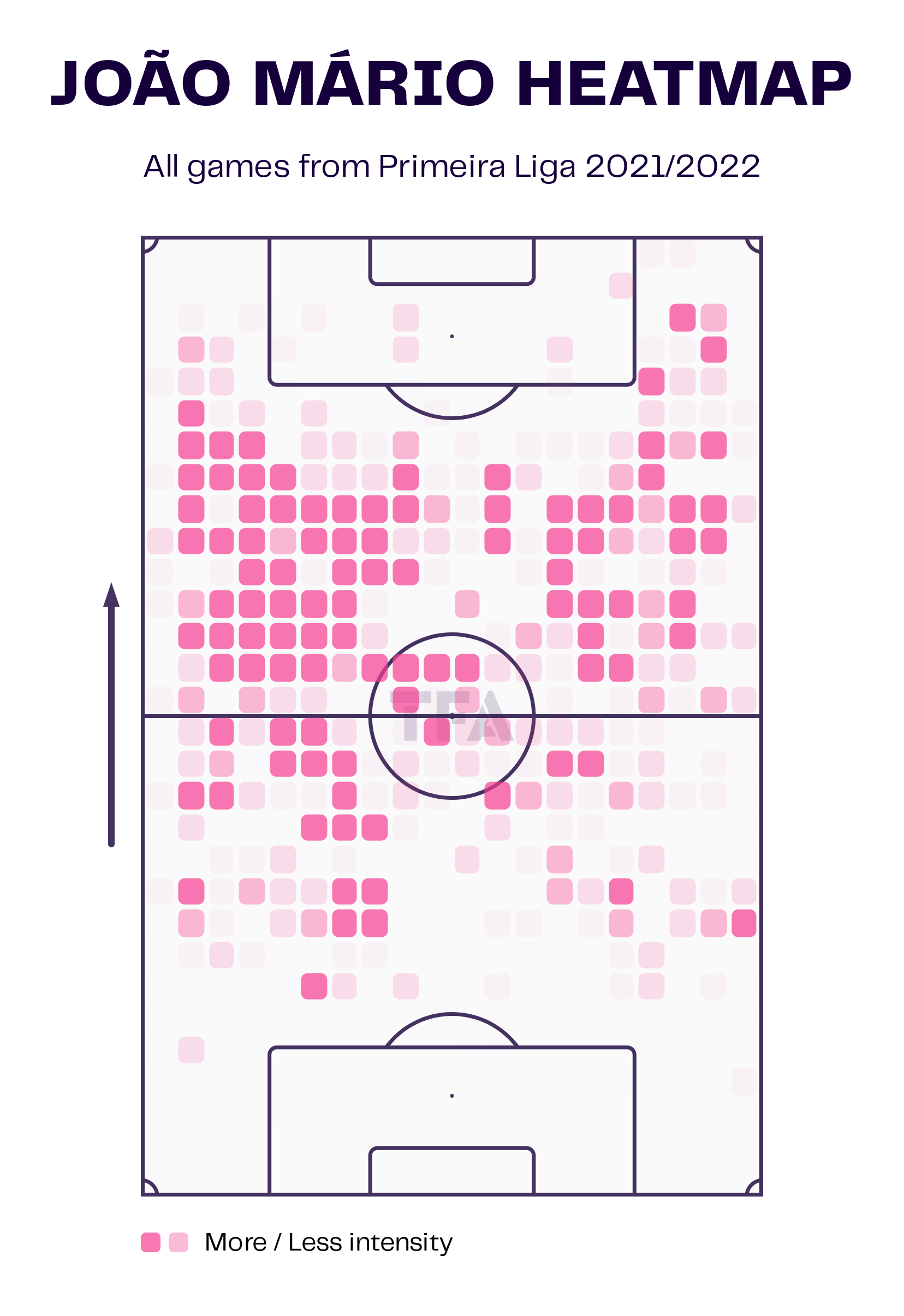 The two visuals above illustrate the heat maps for Joao Mario for this season and the previous one. We can observe that the midfielder has assumed a more progressive role. Compared to last season, the player has displayed a lot more intensity in wide positions in the final third, particularly on the left side and inside the penalty box. He enjoys around 40 touches per match in the attacking third. Additionally, he enjoys 4.3 touches of the ball inside the opposition’s penalty area per match. 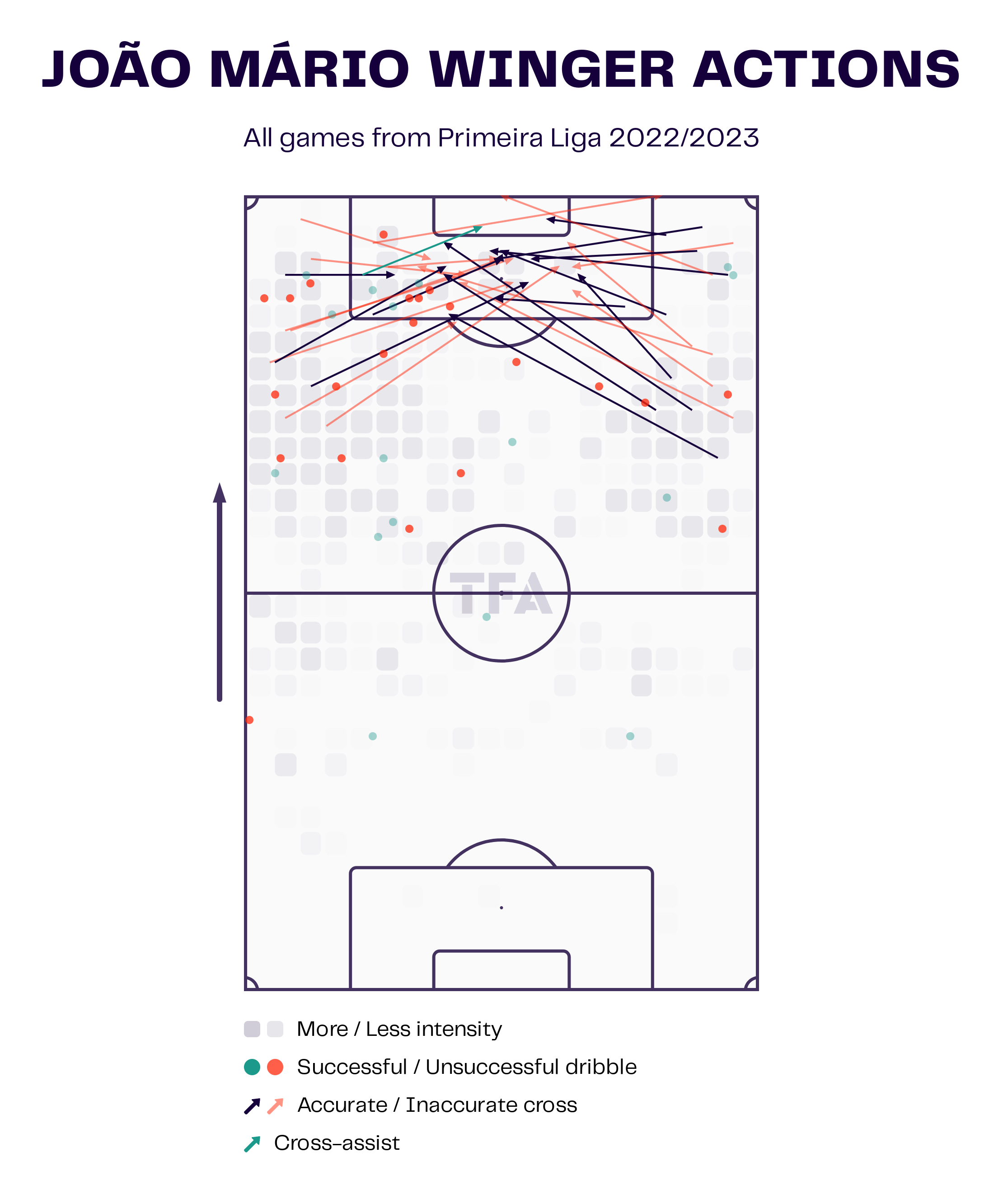 As the above viz indicates, Joao Mario is making a lot of winger actions this season. He has made the second-most crosses for Sporting (52), with an average of nearly 5.2 crosses per game. All these figures are much higher than last season when he was averaging 4.4 crosses, 30.5 touches in the final third, and 1.45 touches in the penalty box per match. Furthermore, Joao Mario also makes around 2.5 progressive runs per 90 minutes. 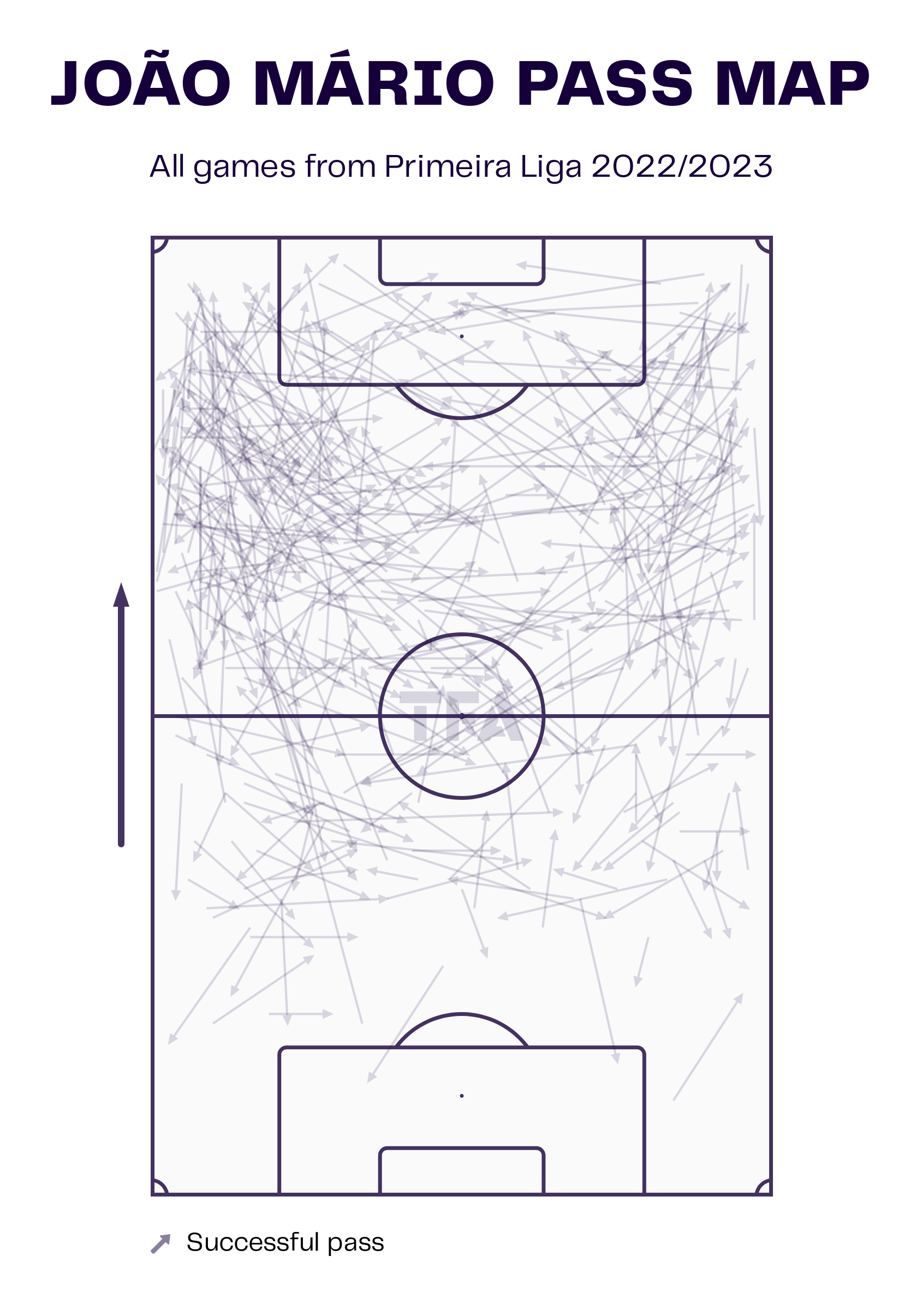 Apart from creating chances for teammates, Joao Mario is also excellent at circulating the ball. The viz above shows the player’s pass map for this season. Among players playing in a similar position as him, he averages the most passes (45.7) and progressive passes (7.5) per match. He also makes 4.6 passes to the final third, 4.7 passes to the opposition’s penalty area, and 1.9 long passes per match.

Joao Mario is enjoying an impressive season with Sporting CP and is on course to set some personal best figures in terms of goal contributions. He has assumed a more attacking and creative role this season. Benfica will hope he maintains the same levels of consistency throughout the campaign as they chase their first league title in three years.