Hector Hernandez is a Spanish footballer who currently plays for GD Chaves in Liga Portugal. Coming through the youth ranks of Las Palmas, he went on to represent Atletico Madrid’s reserve team, taking his time to develop and break into the scene. Thereafter, he went on to represent a few teams across the different tiers of Spanish football. Hernandez had an impressive season in the Spanish third division last year, scoring 16 goals in 30 appearances for Rayo Majadahonda. Going into the 2022–23 season, newly-promoted Chaves brought the Spanish centre-forward to Liga Portugal to lead them in the attack. Since then, Hector Hernandez has nailed down a starting role in Chaves’s attack and is currently enjoying his first Liga Portugal season with five goals under his belt. Let’s now look at some stats that capture the Spanish forward’s impressive performances in Liga Portugal 2022/23. 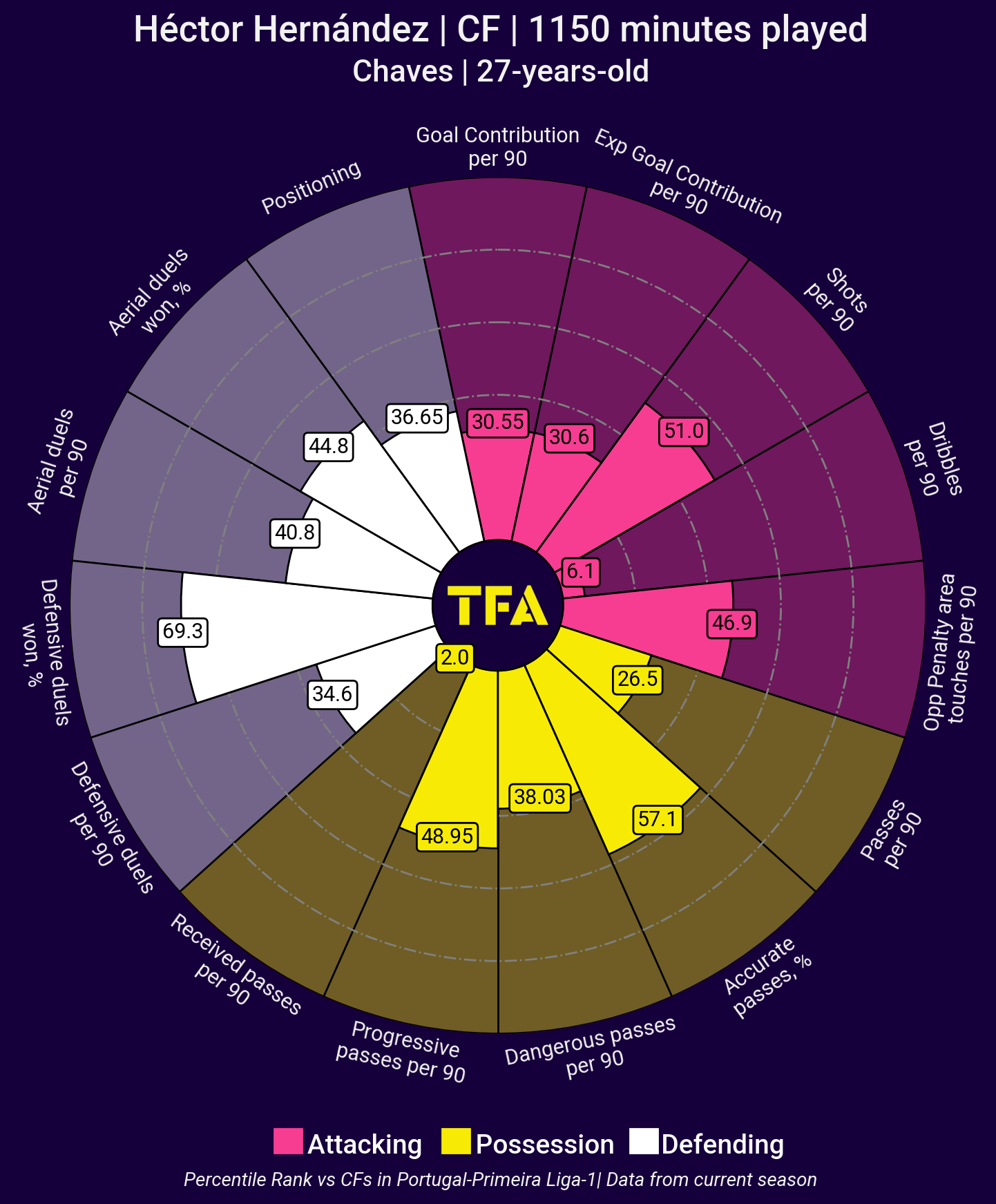 Hector Hernandez has made 13 appearances in Liga Portugal for Chaves this season, starting all and averaging 82 minutes per game. The above viz shows the percentile rank of the player’s stats compared to other centre-forwards in Liga Portugal. It can be observed that Hernandez’s best percentile rank in the attacking department comes under shots per 90, followed by penalty area touches. Meanwhile, his best rank under possession and defence parameters is under accurate passes (%) and defensive duels won (%). 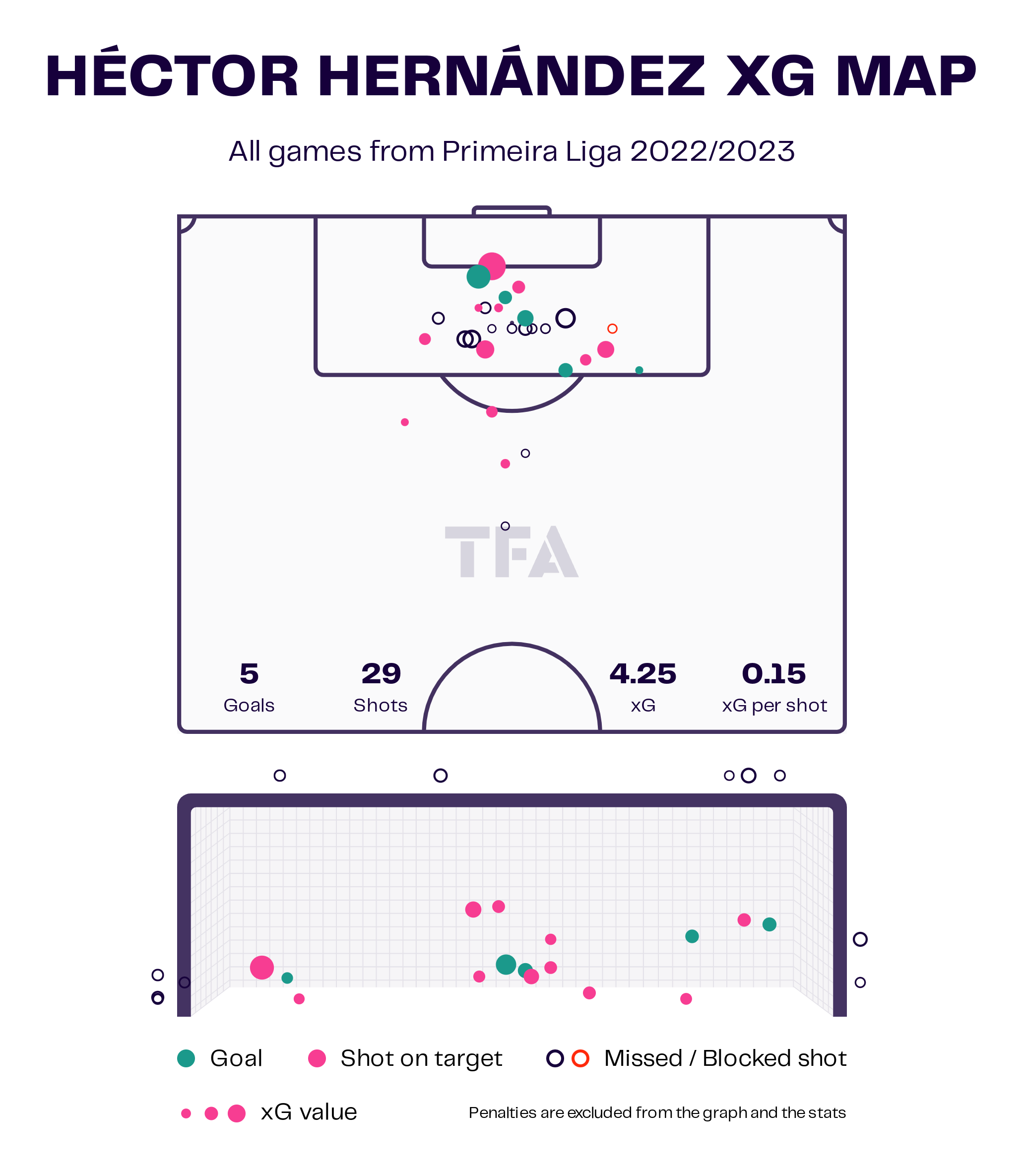 Hector Hernandez is currently Chaves’s top scorer this season. The 27-year-old has found the back of the net five times with an xG value of 4.25. He is scoring at the rate of 0.33 goals per match while averaging an xG rate of 0.39. The viz above depicts the player’s shot map from Liga Portugal 2022/23. Like a proper centre forward, Hernandez has taken most of his shots inside the penalty area and scored all of his goals from inside the box as well. He has attempted 29 shots, with 16 on target. Hernandez takes an average of 2.27 shots per match for Chaves, with an accuracy of 55.7%. 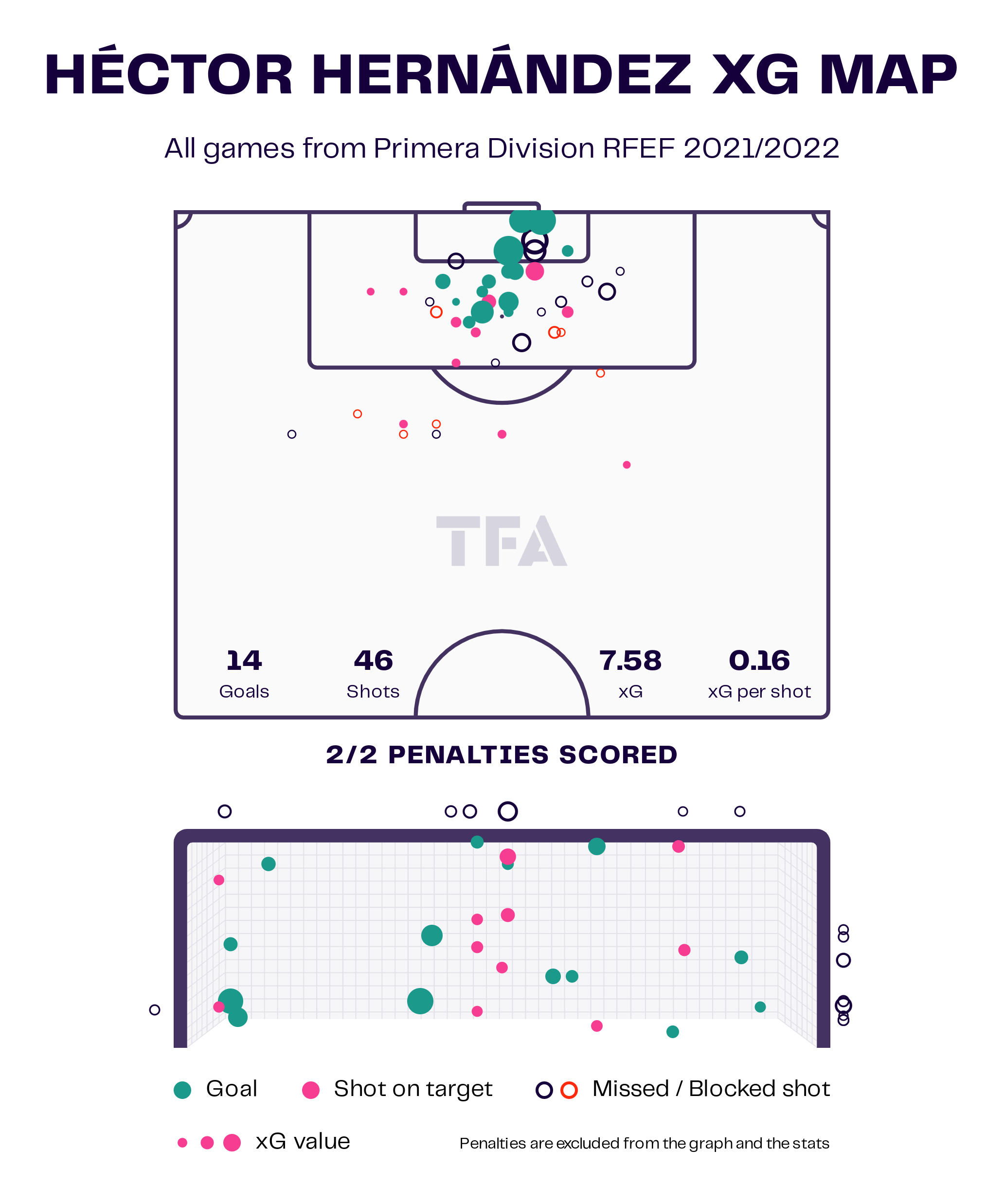 In comparison to the 2021/22 season, Hector Hernandez scored 16 goals with Rayo Majadahonda in the Spanish third tier. He attempted 46 shots, averaging 2.38 shots per game with an accuracy rate of 56.3%. He was scoring 0.79 goals per game with an average xG rate of 0.45. The standard of competition is much higher in Liga Portugal, and yet the Spanish centre-forward has managed to keep his goal contributions intact.

Hernandez with the ball 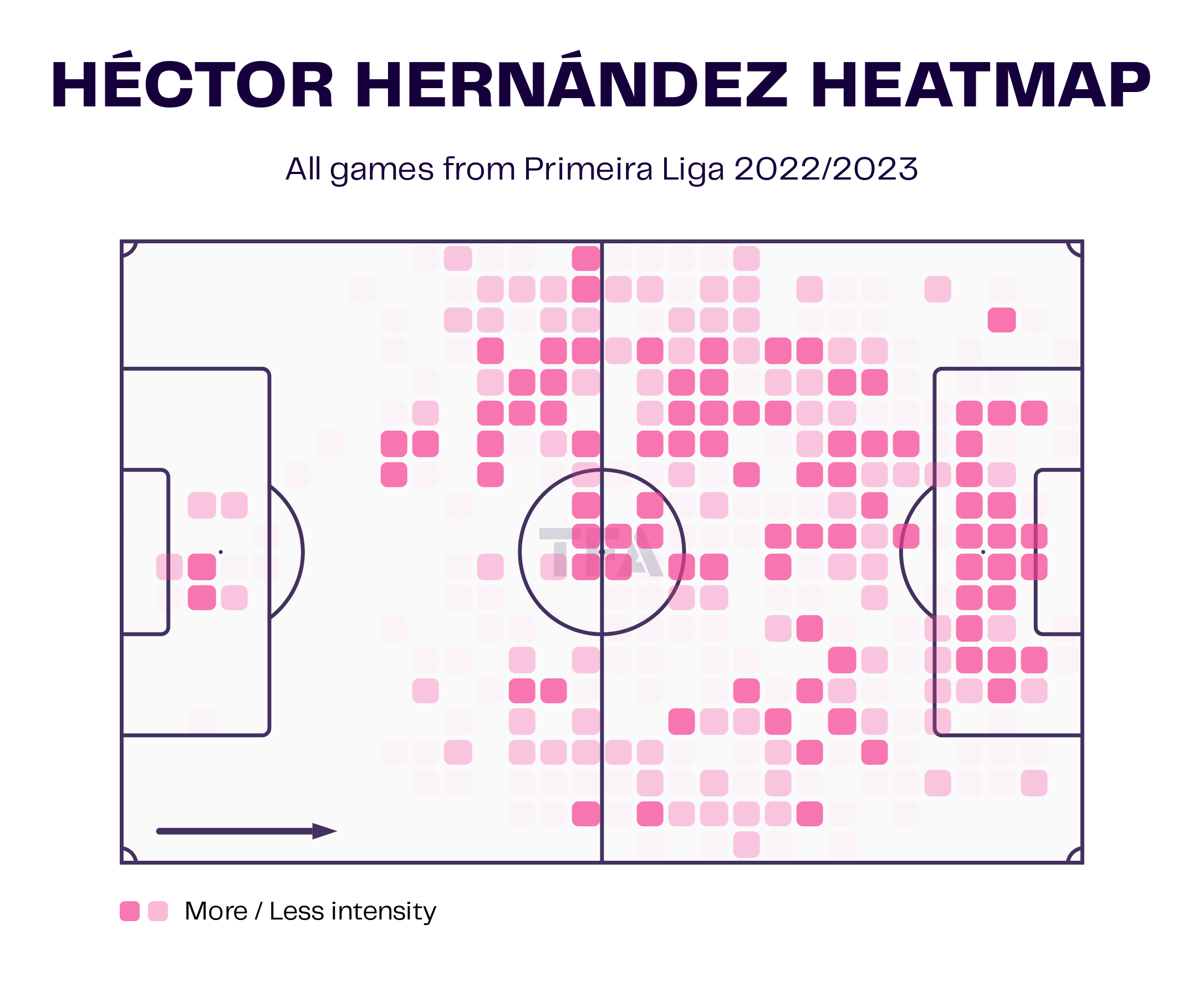 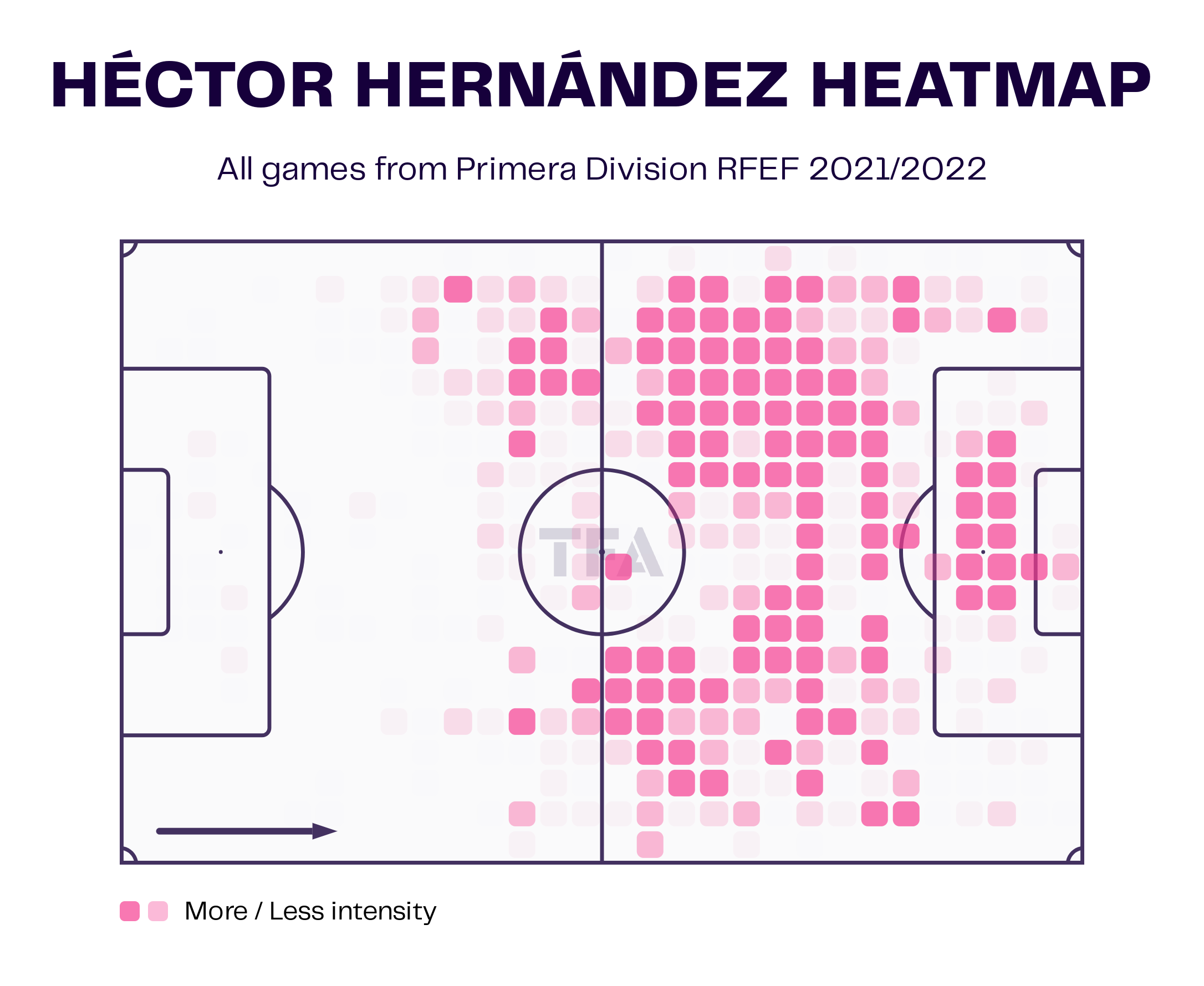 Hector Hernandez usually operates as the lone striker for Chaves. While his prime role is to prowl in the box for goal-scoring opportunities, he also drops into the middle third to link up play. The two visuals above are a comparison of the player’s heat maps from this season and the previous one. It can be observed that Hernandez has displayed more intensity inside the penalty box for Chaves during the current season. He is averaging 2.93 touches per match in the opposition’s penalty area, up from 2.8 in the previous season. 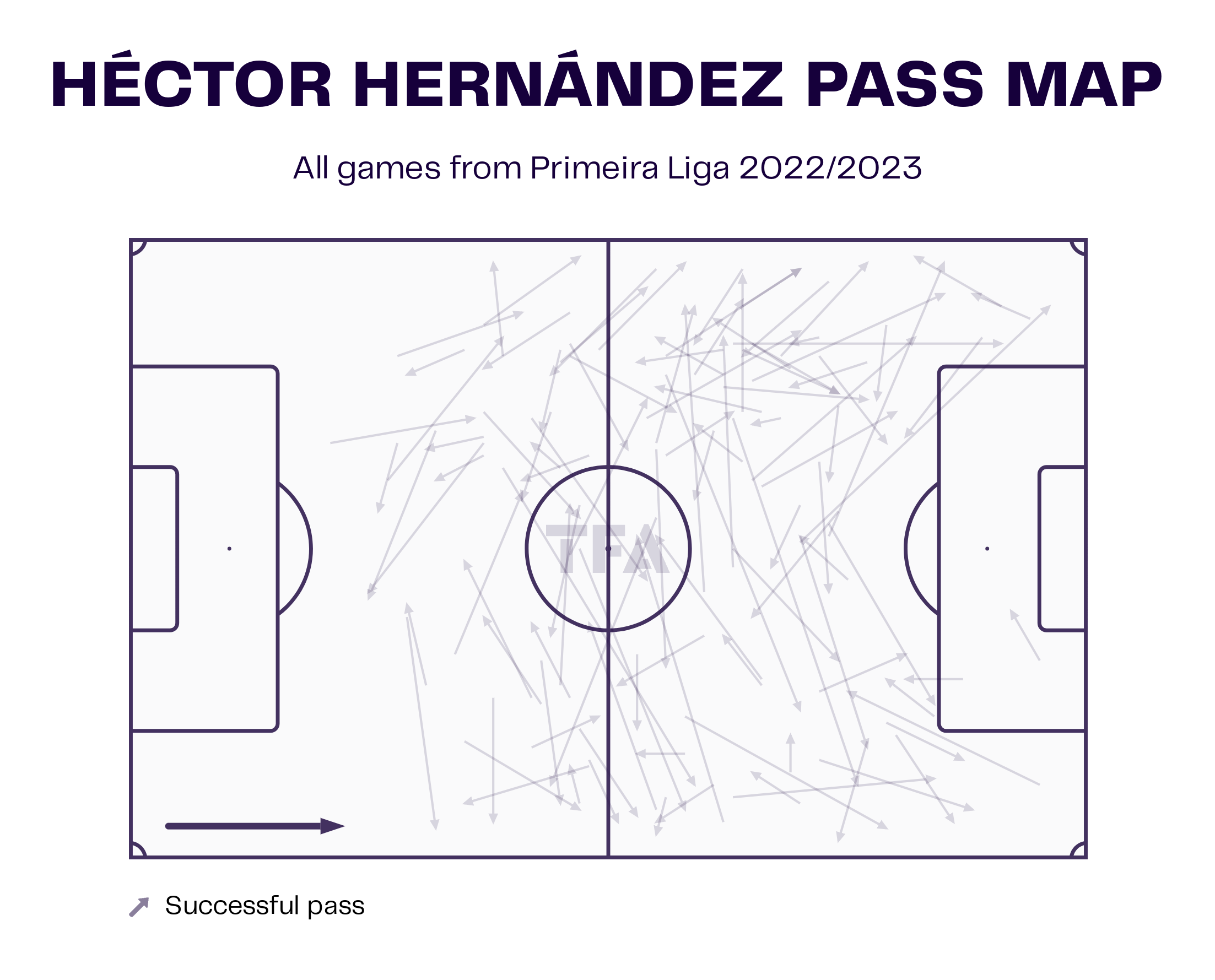 In addition to his attacking prowess, the 27-year-old is a sound passer of the ball. He drops into midfield and can hold onto the ball, which can prove vital in setting up counterattacking plays. Hernandez attempts 17.24 passes per match with an accuracy rate of 80.3%. Additionally, he makes 2.08 progressive passes and 0.9 passes into the penalty box per match. He also attempts 0.5 key passes per 90 minutes. 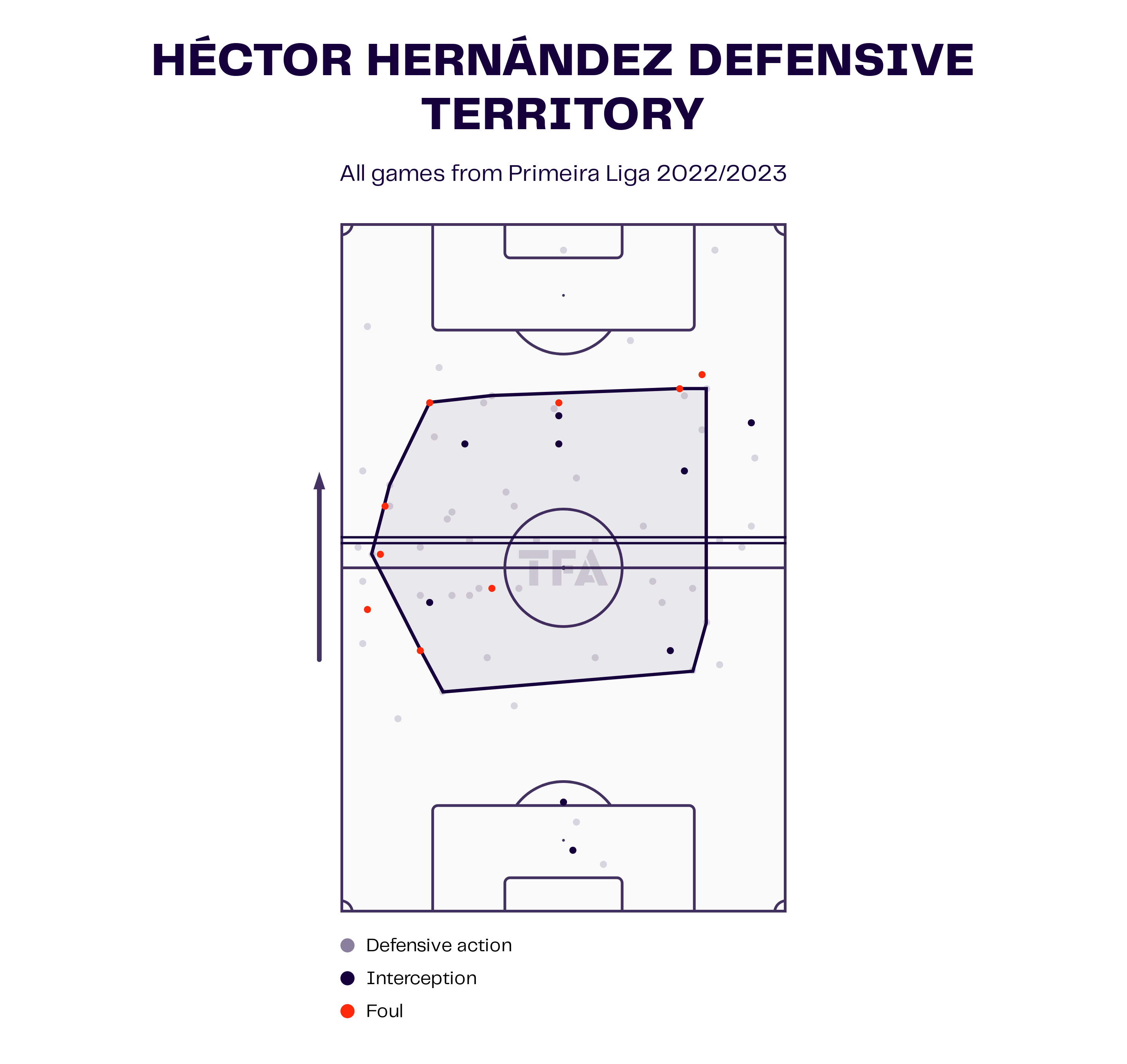 In addition to his attacking attributes, the Spaniard contributes to the team during the defensive transitions. The viz above shows the player’s average defensive territory this season. It can be observed that Hernandez is involved in some defensive actions, including a couple in his penalty box. He makes 2.08 recoveries and 2.04 interceptions per match. Furthermore, he attempts 3.05 defensive duels per match with a win rate of 53.8% and 5.79 aerial duels with a 31.1% win rate.