Gonçalo Ramos is one of the biggest talents in Liga Portugal. The Benfica forward struggled for regular first-team minutes last season, with Darwin Nunez assuming the lead role. However, since the Uruguayan’s departure to English giants Liverpool, Ramos has emerged as the Eagles’ main attacking threat.

The centre-forward has made 21 club appearances this season across all competitions. His 14 goals and six assists for Benfica earned him a spot in Fernando Santos’ squad for the FIFA World Cup. At Qatar 2022, he kept the manager’s faith by netting a clinical hat-trick and an assist in the 6-1 rout of Switzerland, helping his country reach the quarterfinals.

Goncalo Ramos’ splendid performances for club and country have seen him linked with a move to the Premier League. We now look at some important stats to recognise the impressive season this Portuguese talent is enjoying. 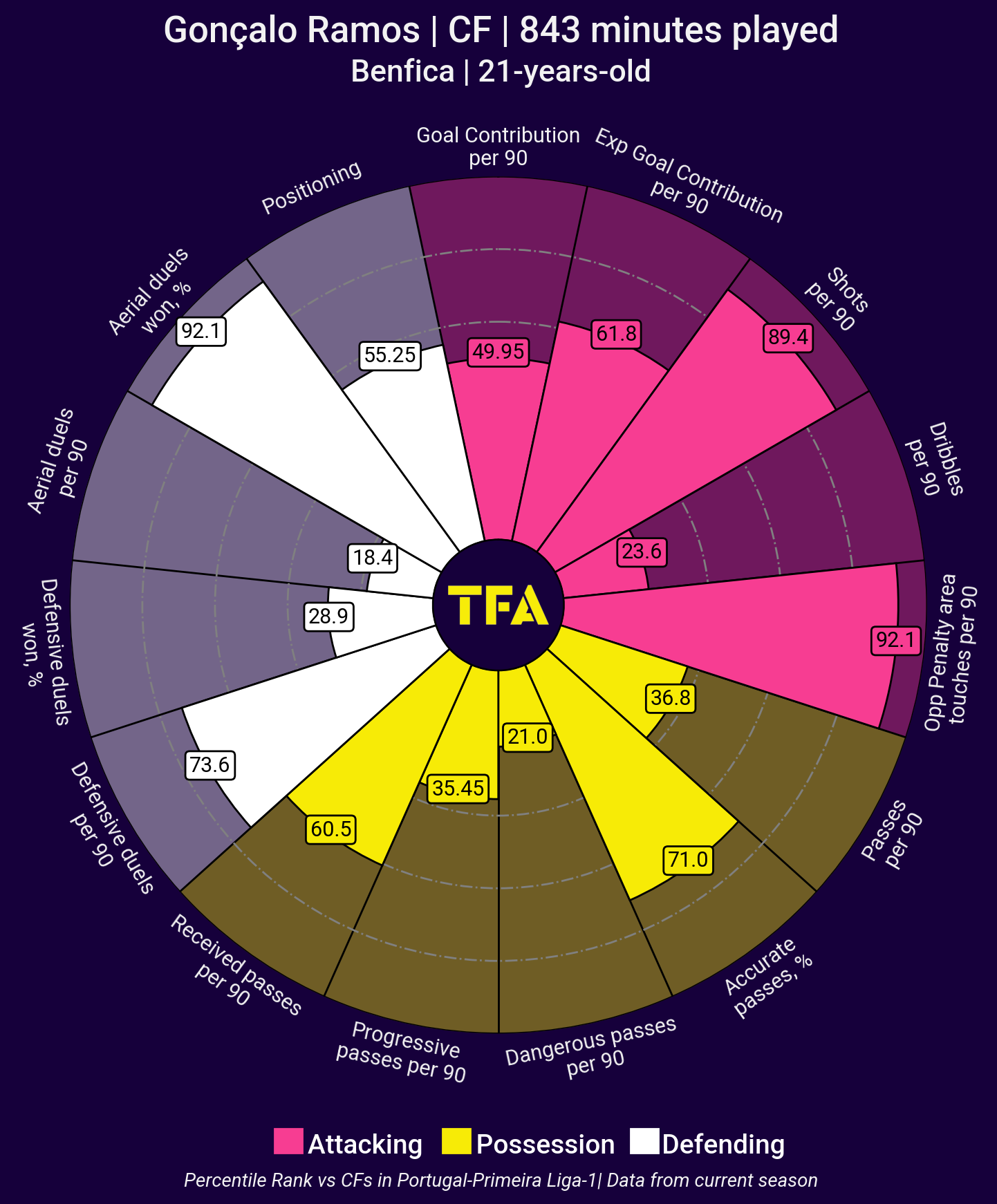 The above viz shows the percentile rank of Goncalo Ramos against other centre-forwards in the Portuguese top division. He ranks in the top 92.1 percentile for touches in the opposition penalty area per 90 minutes and the top 84.9 percentile for shots per 90. The 21-year-old has decent passing stats too, as he is in the top 71.0 percentile for accurate passes. Aerial duels won and defensive duels are two other areas where the young Portuguese has shone, ranking in the 92.1 and 73.6 percentiles, respectively. 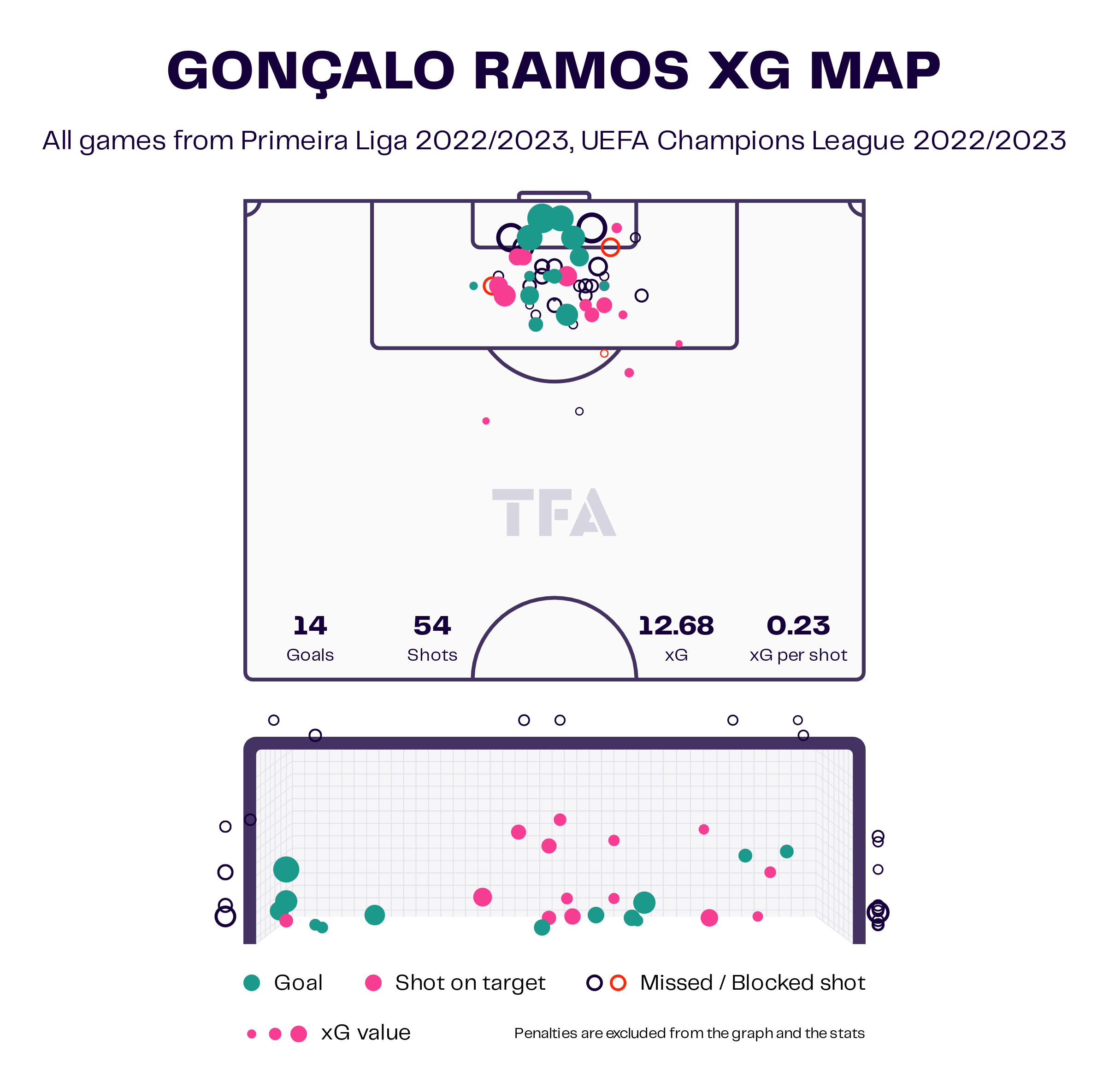 In eleven league appearances this season, Goncalo Ramos has found the back of the net nine times along with three assists. He has also scored one goal in the UEFA Champions League and four in the competition’s qualifier stages. He’s taken 54 shots, the majority of which have come from inside the penalty box. In the domestic league, Ramos takes an average of 4.06 shots per match, with almost 42% of them on target. His xG per 90 minutes currently stands at 1.01. 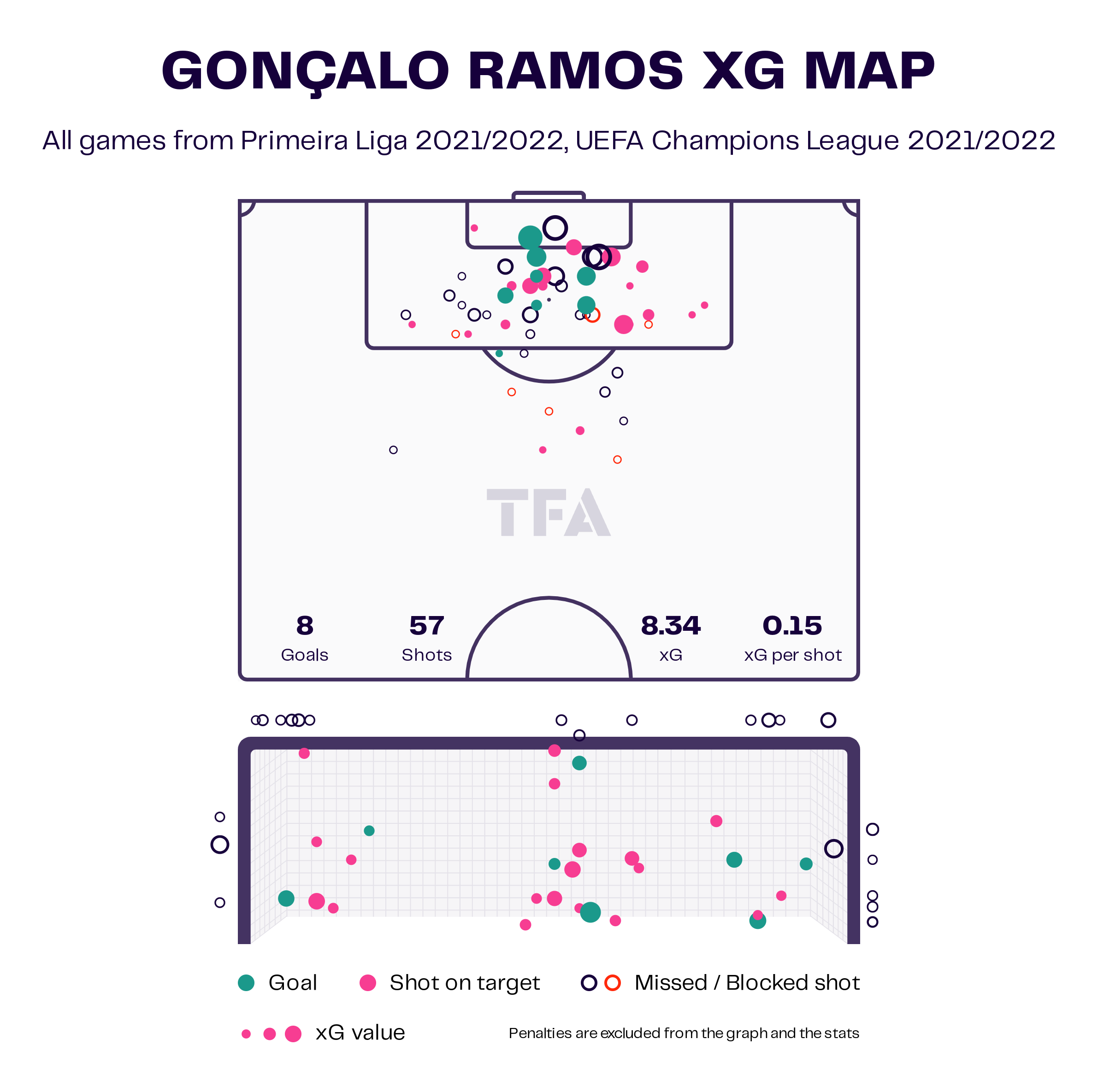 Comparing the aforementioned stats with his numbers from the previous season, we can see major improvements in key areas. The centre forward was mostly a support player last season, coming on from the bench on several occasions. In those 46 appearances across all competitions, the centre-forward managed only eight goals and four assists. The current season is still far from its conclusion, yet the Benfica man is registering much better stats in most performance parameters. 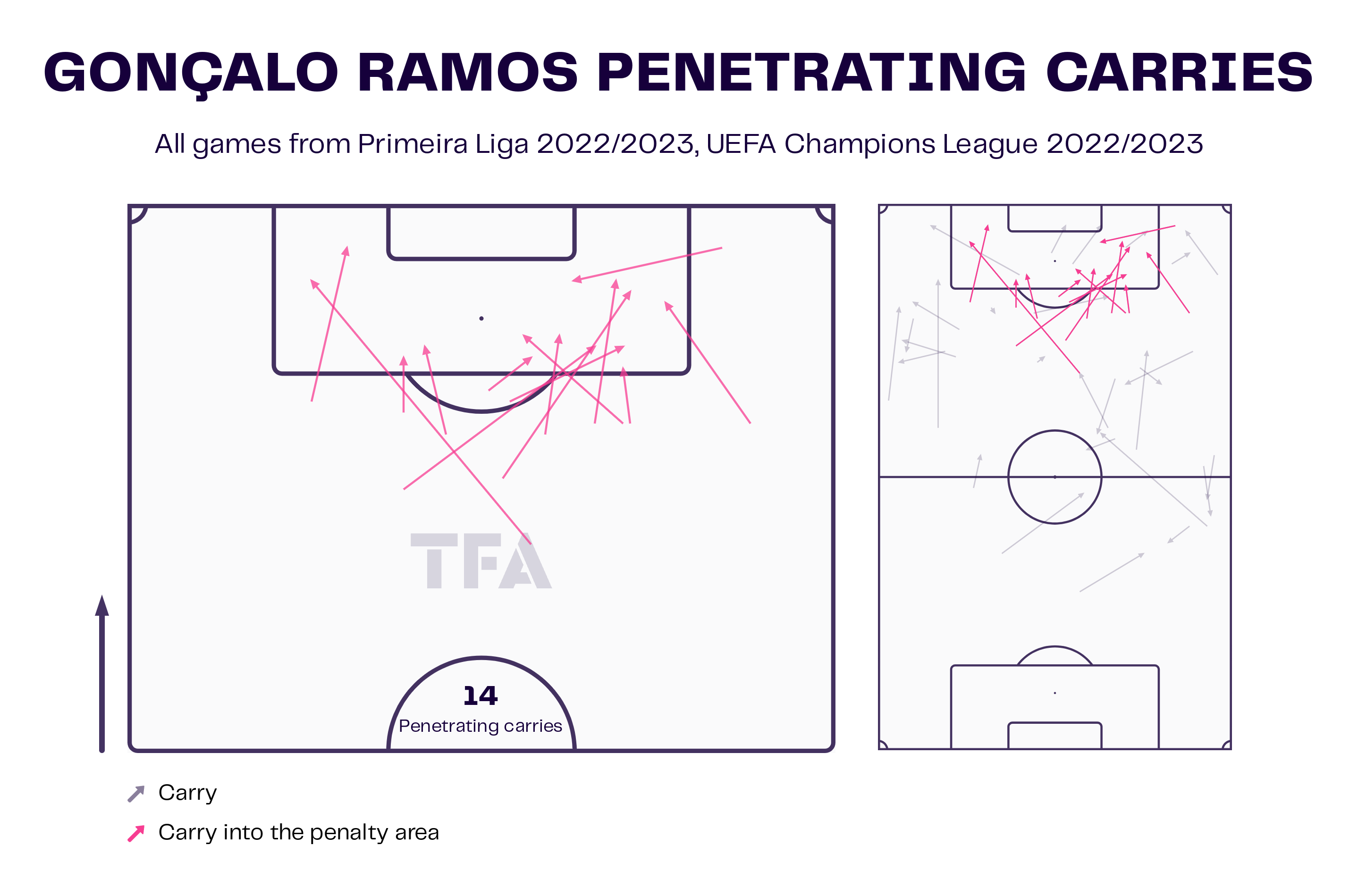 While the current season is still young, this is one aspect of his gameplay that his striking talent will be keen to improve. By looking at the visual above, we can understand the type of penetrative movements the player makes. Ramos has the affinity to attack the spaces inside and outside the penalty area as well as create additional spaces with his positional play.

Becoming a traditional no. 9

Considered a versatile centre forward, Goncalo can play multiple positions across the attacking line. Benfica manager Roger Schmidt has given him a more central and prominent role in Liga Portugal 2022/23. The manager has deployed him as the main striker in a 4-2-3-1 formation, where he is averaging 73 minutes per game. 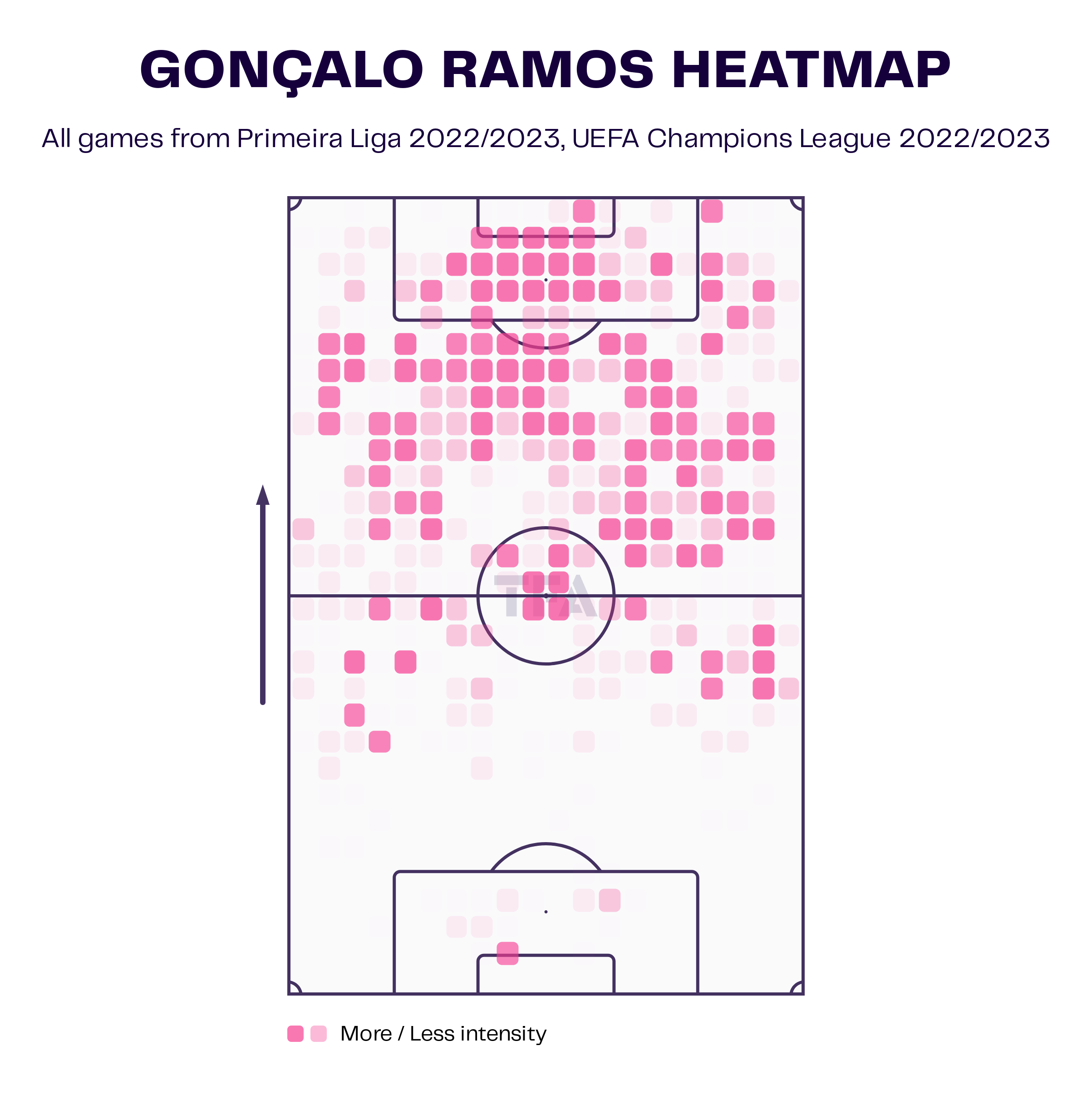 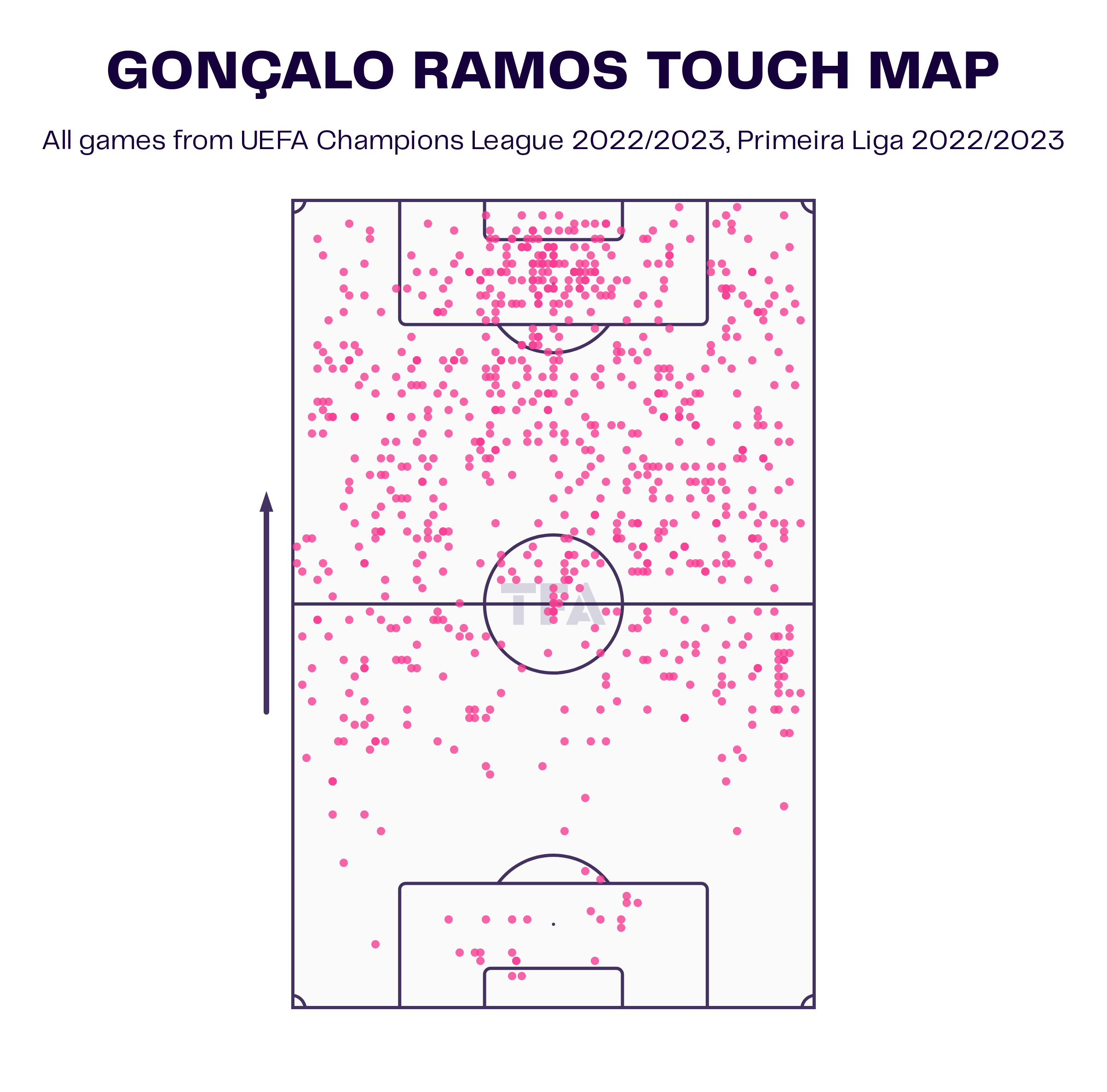 These maps highlight his frequent involvement and smart positioning in and around the penalty area. However, Ramos has a lot more stored in his locker. Acting as Benfica’s focal point of attack, he has displayed the ability to hold up the ball. He also tends to move wide and drop deep, linking up with his teammates and building attacking plays. He is also adept at winning aerial duels and possesses a good defensive work rate.

The transition from a wide forward 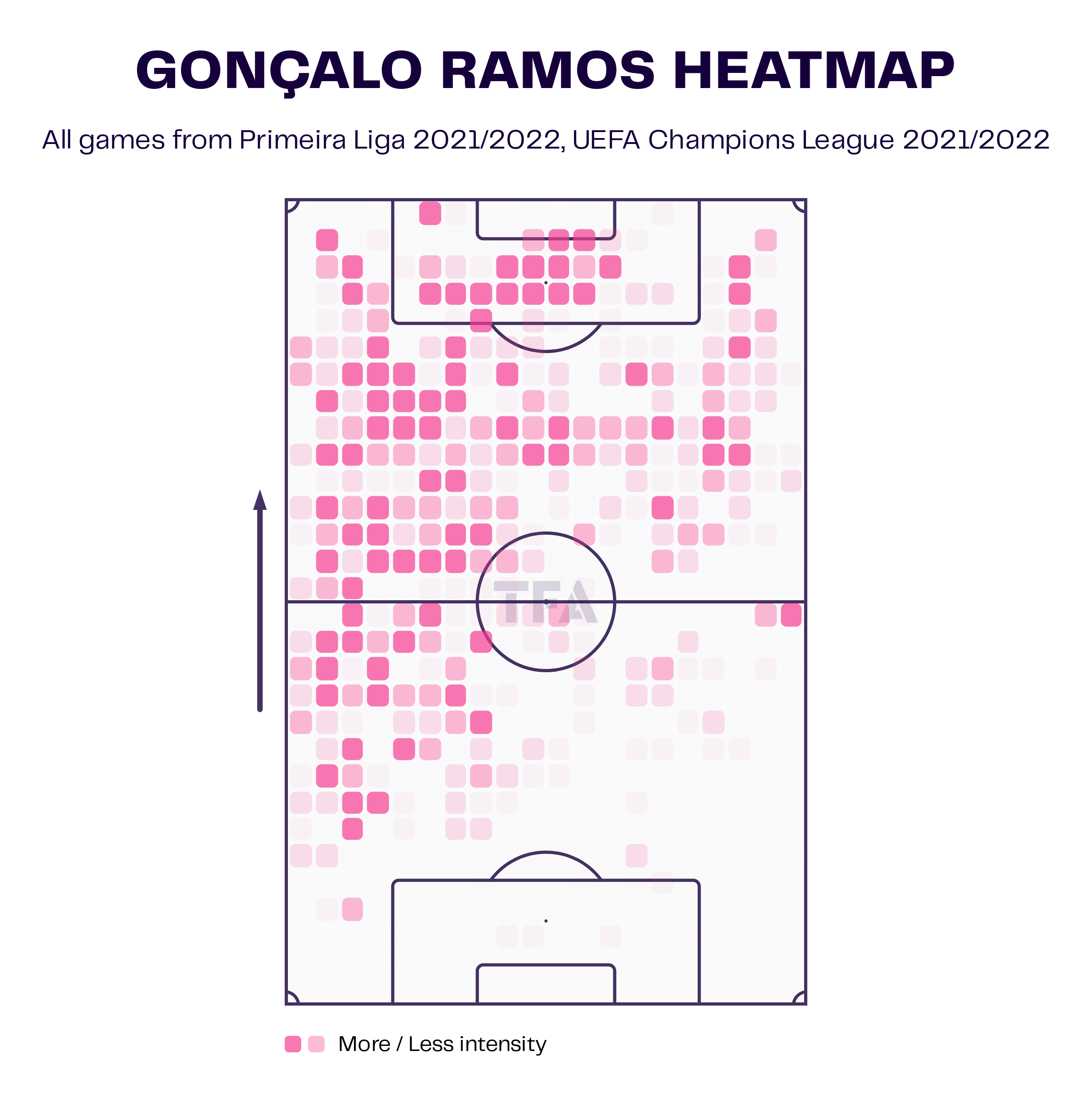 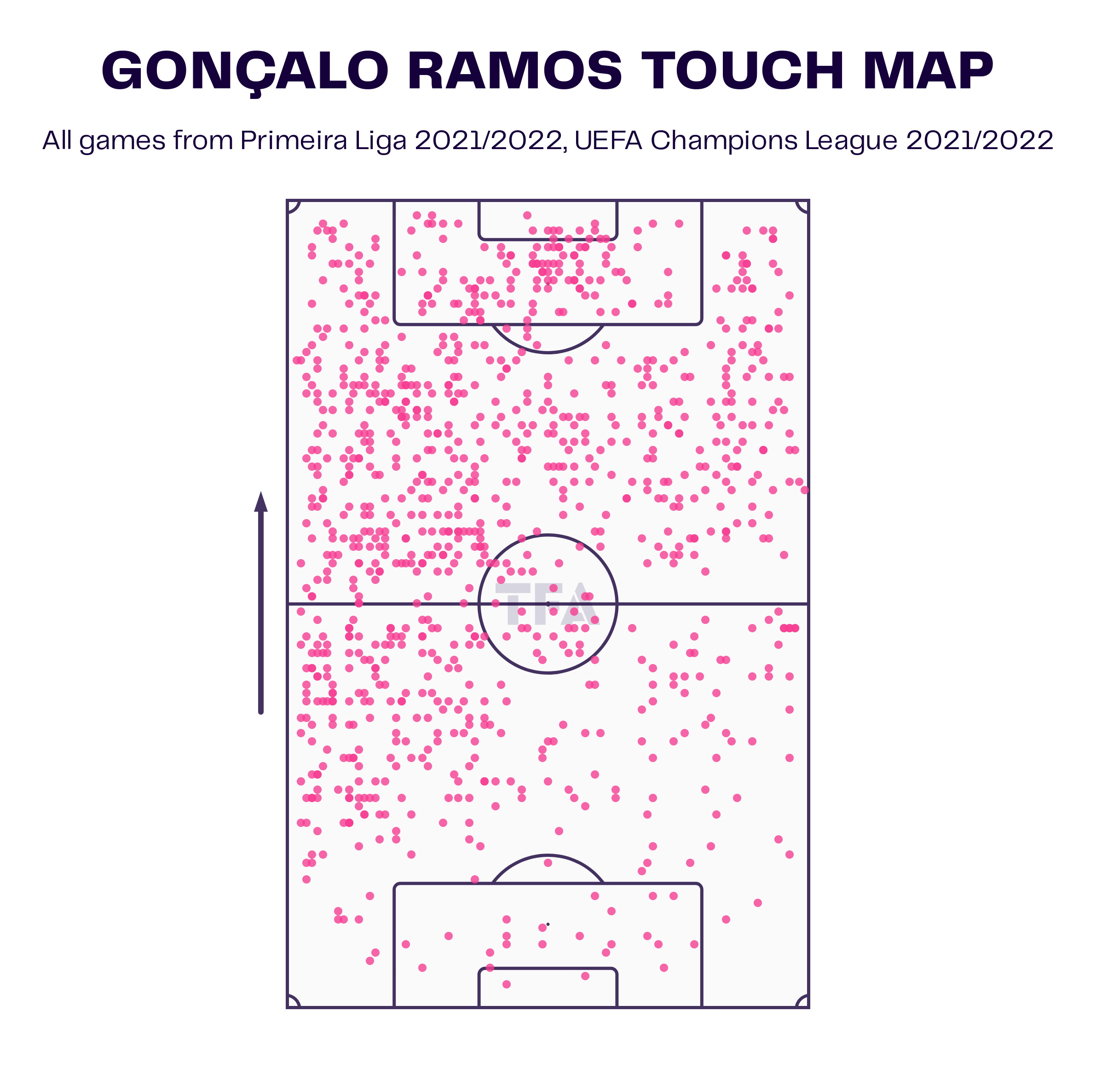 Prior to this season, Goncalo Ramos had a less influential role within the Benfica squad. He was averaging 55 minutes per game and would often come on as an impactful substitute. The visuals above show the player’s touch map and heatmap from last season. He was deployed on wide positions of Benfica’s offensive line at times, particularly on the left side.He displayed spatial awareness, the willingness to work hard, and the ability to take up positions between opposition defenders to exploit the spaces beyond their defensive line.

Following the high-profile departure of Darwin Nunez, Goncalo Ramos has assumed the significant role of scoring goals for Benfica. He carried on his impressive run of form into the World Cup, and his clinical finishing has often been the difference for his team. As a result, Benfica is enjoying a dominant, unbeaten run in their domestic league. The club has also progressed into the knockout stages of the Champions League. At just 21 years of age, it might not be the right time for Ramos to move to the big leagues. However, it will be interesting to see his development as a player and whether the big teams come calling for him with big money.