After achieving their joint-highest finish in Liga Portugal in 2021/22, Gil Vicente are showing substantial signs of underperformance in the league this season. However, a player who has managed to outshine his team’s struggles is Fran Navarro.

The Spanish centre-forward has impressed since moving to the Gilistas in 2021. With 16 goals, he finished fourth among the league’s top scorers last season while his team finished fifth and qualified for the UEFA Conference League for the very first time. But as things have taken a bad turn for Gil Vicente with the team sitting in the relegation zone in 16th position, Fran Navarro is still carrying on with the same intensity.

While the team has only managed to score eleven goals in total this season, Navarro has scored eight of those single-handedly. With six consecutive losses in as many games, they are showing relegation form. However, the striker’s consistent performances and rich run of form have kept his team’s hopes of surviving the drop. Let’s now look into some stats that capture Fran Navarro’s performances for Gil Vicente in Liga Portugal 2022/23. 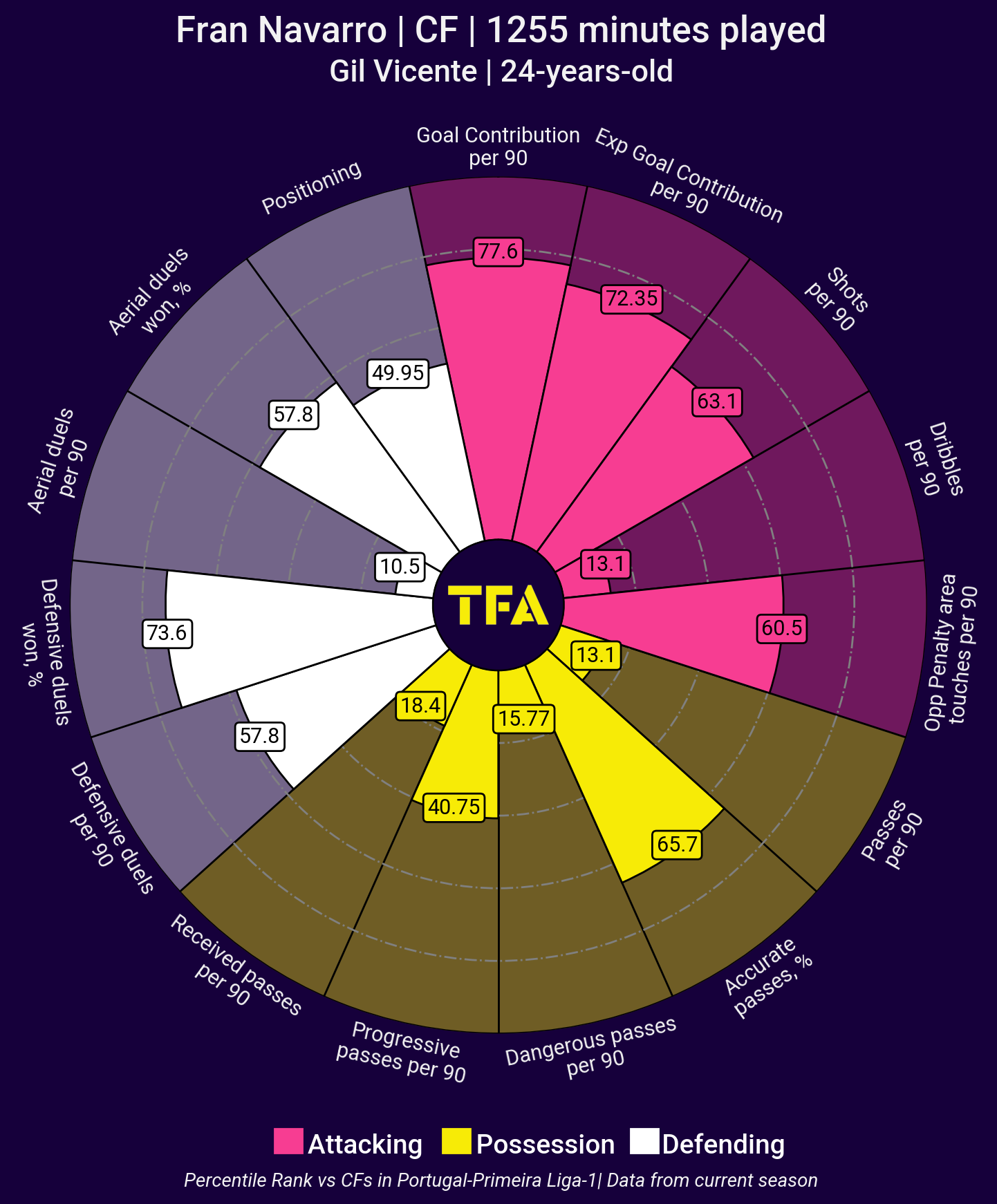 The above viz shows the percentile rank of the player’s stats in Liga Portugal 2022/23 in comparison to other centre-forwards. We can observe that Fran Navarro possesses a good ranking in attacking metrics like goal contributions and shots, possession metrics like accurate passes, and defence stats like defensive duels won. He also has an above-average rank in terms of indicators like opposition penalty area touches and aerial duels won. 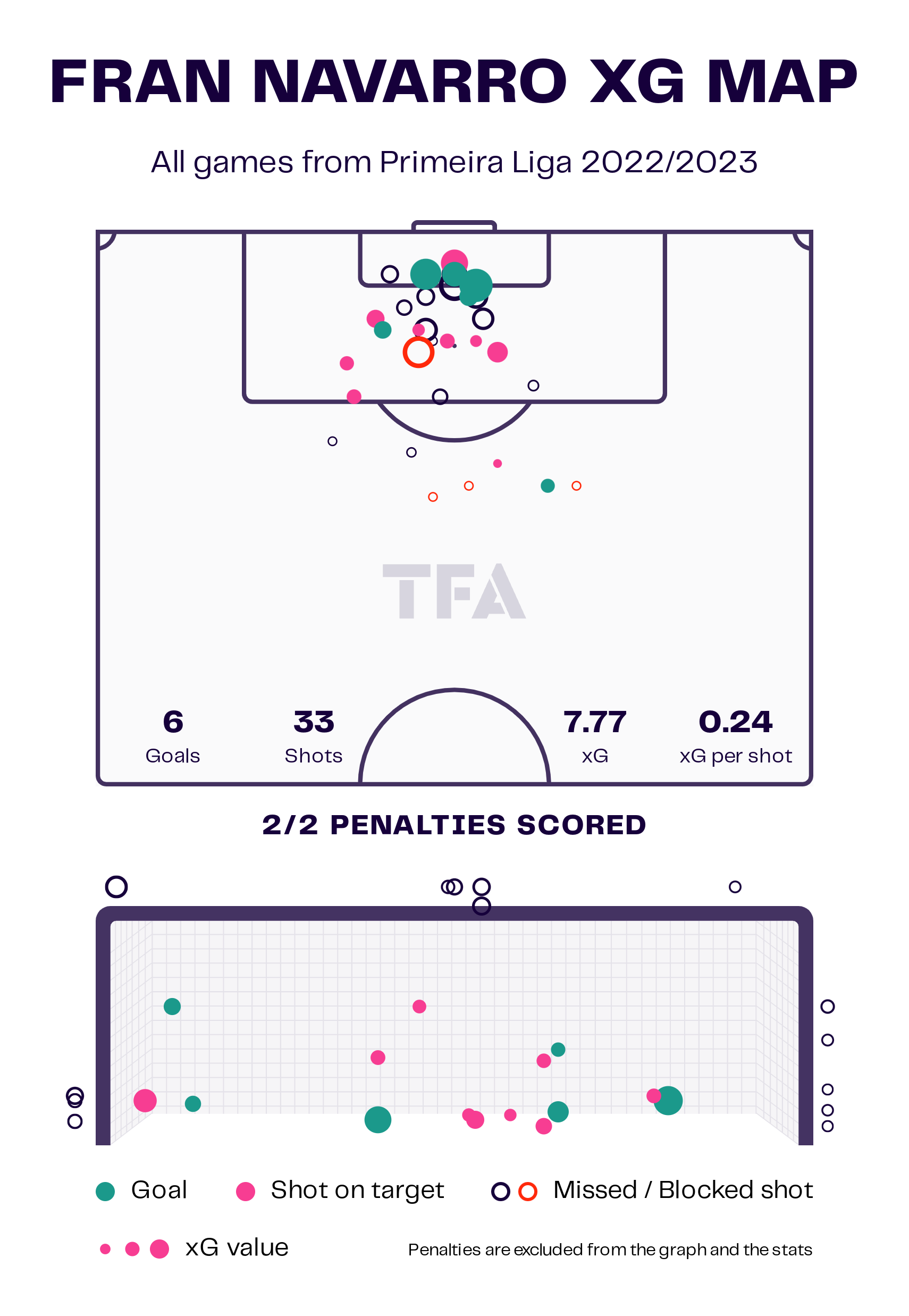 Spaniard Fran Navarro has been the best player overall in a faltering Gil Vicente side. In 13 appearances, he alone has scored eight goals, which is the second-highest total in the league, and provided one assist. The viz above depicts the player shot map in the league this season. We can observe that he takes the majority of his shots from dangerous positions in and around the 6-yard box. Additionally, all but one of his goals, including two penalties, have come from inside the box. This compliments Navarro’s finishing ability and composure in front of the goal. 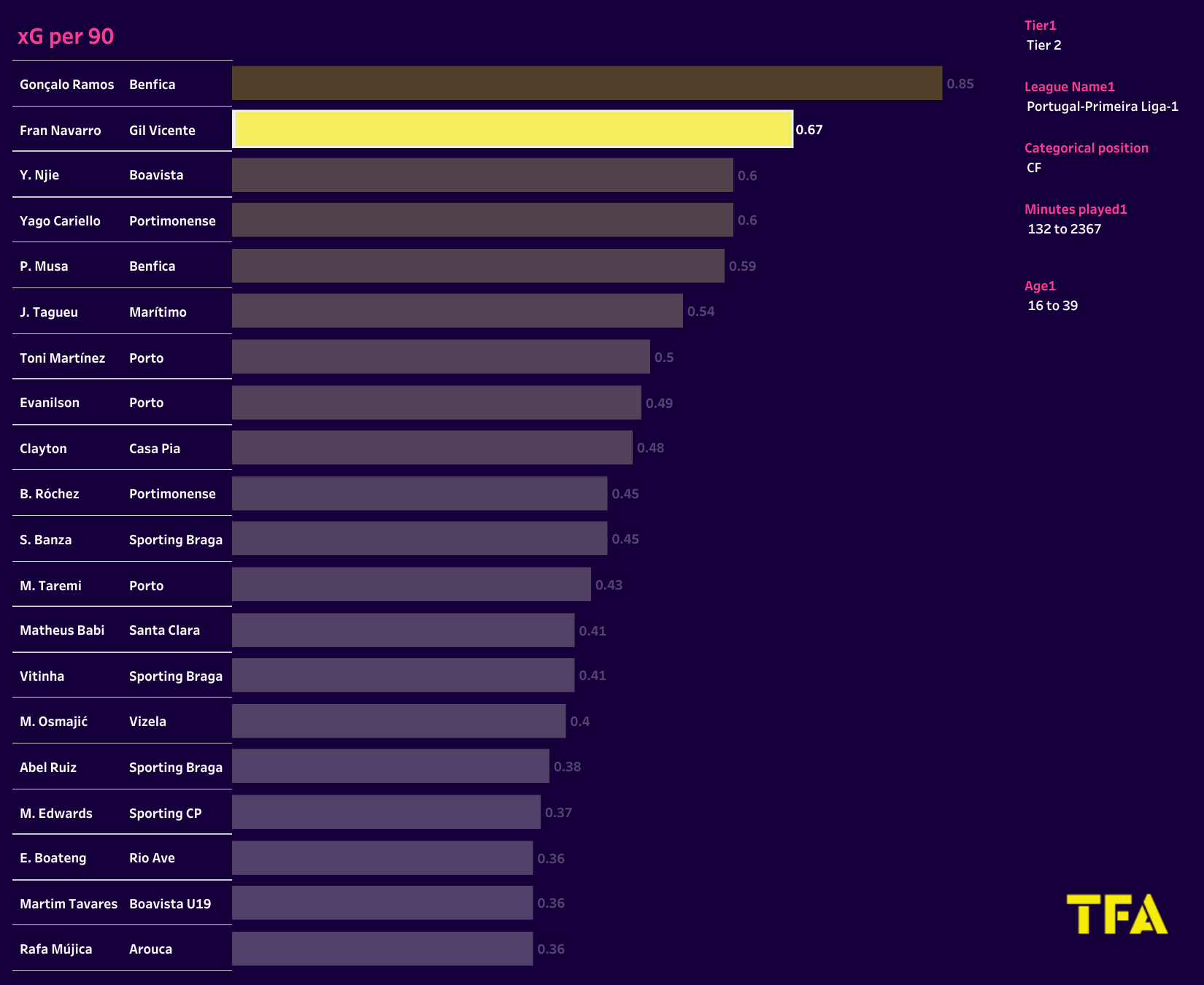 The 24-year-old has taken a total of 33 shots for an average of 2.51 per match with 48.6% accuracy. His expected goals per match equate to 0.67, which is also the second-highest in comparison to players featuring in a similar position as him. 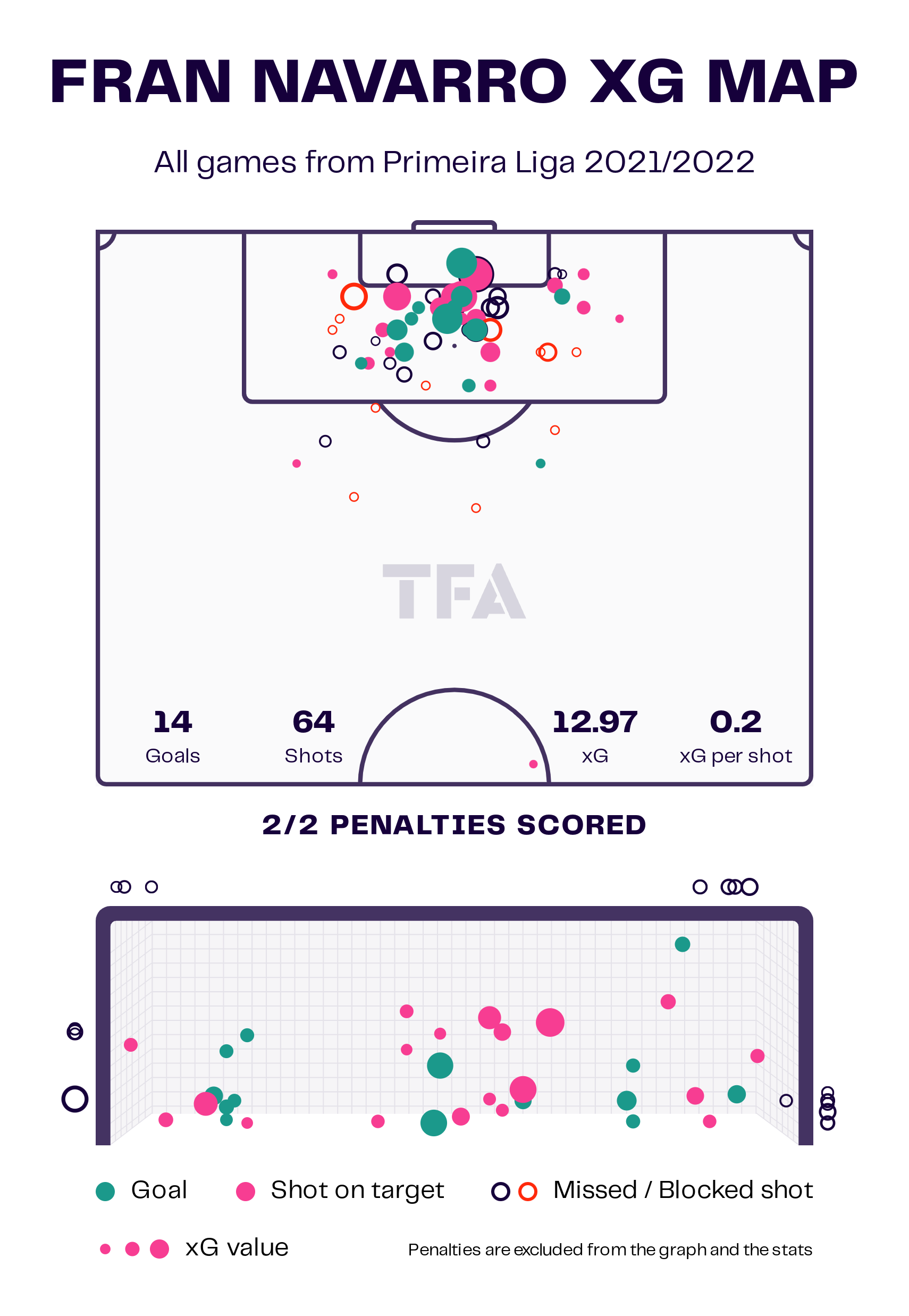 When compared to last season, Fran Navarro scored 16 goals in 32 league appearances. His xG tally stood at 0.47 per match, and he averaged 2.14 shots per match with 53% accuracy. Despite the team performing poorly, the centre forward has managed to enhance his attacking output. Interestingly, he will be on course to better his goal contribution tally from last season if he carries on with the same consistency.

Other aspects of Navarro’s game 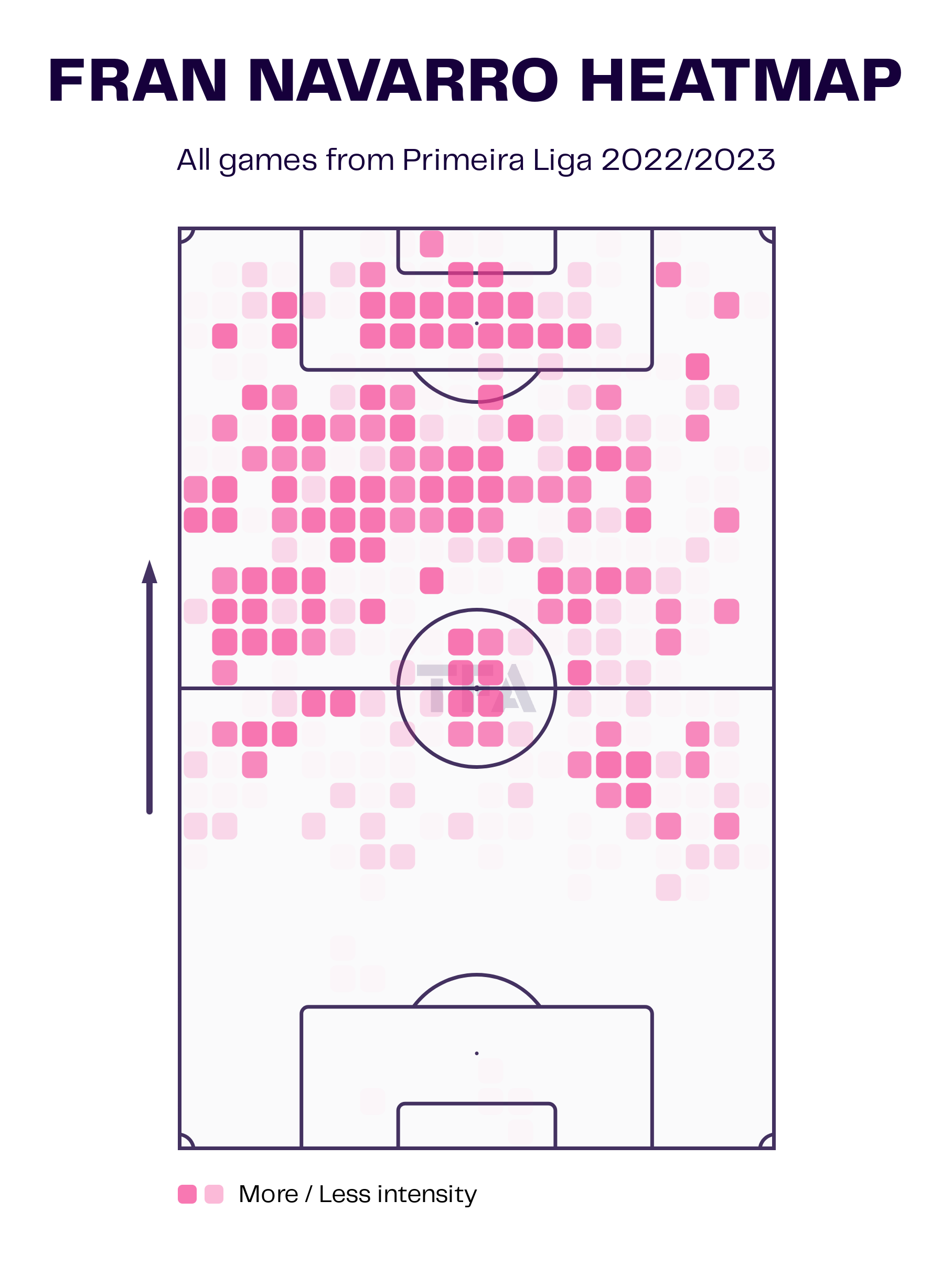 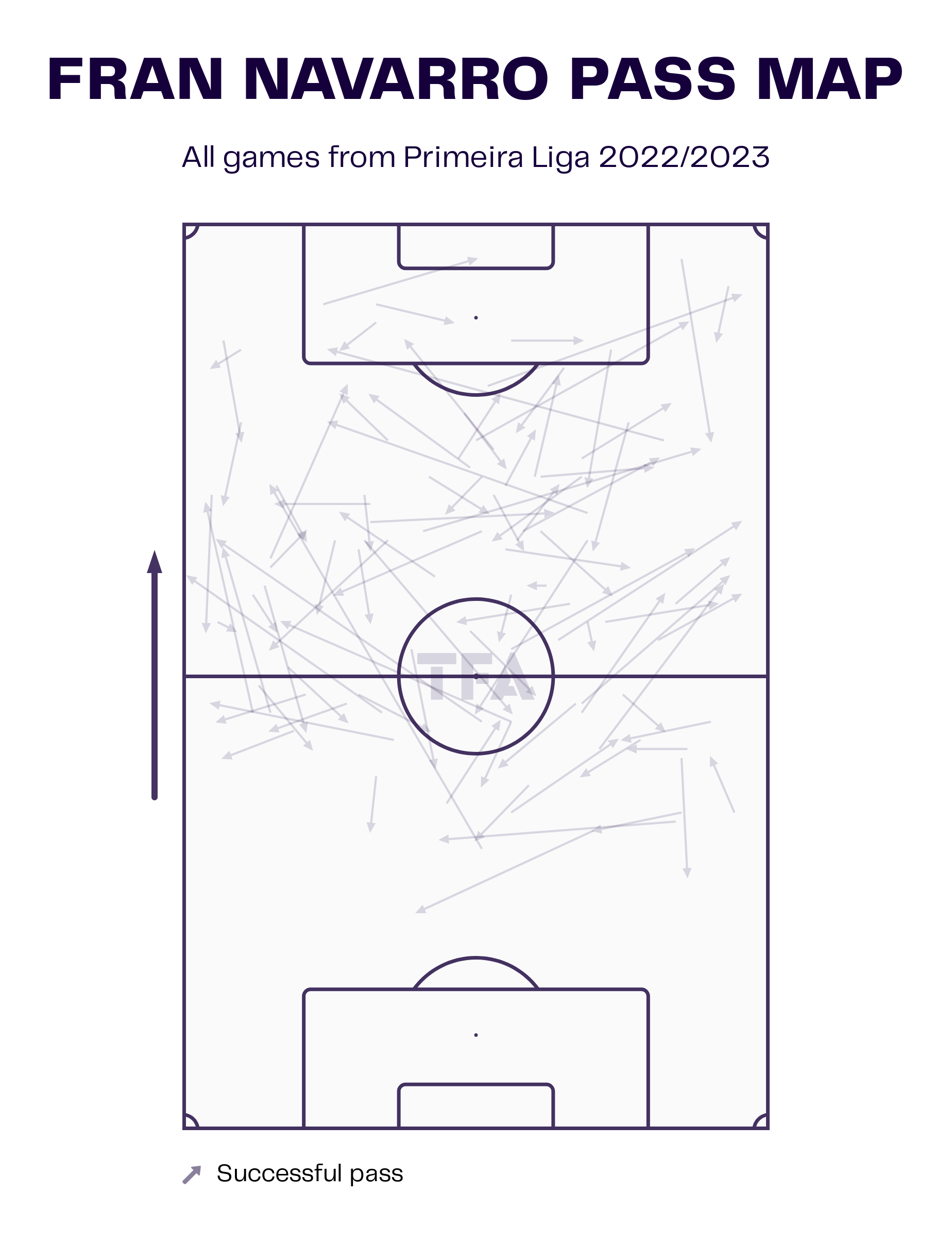 Fran Navarro operates as the target man for this Gil Vicente side. While his prime duty is to get goals, he often drops deep to link up play and sustain attacking moves. The two visuals above depict the player’s heat map and pass map from the current season. We can observe that Navarro covers a lot of ground all over the opposition’s half. He displays the most intensity in the central areas of the final third and inside the penalty box. While in the middle third, he drifts towards the wider positions on either flank.

The Gil Vicente striker averages 10.25 passes per match with 79% accuracy, of which 1.8 are in the forward direction. He also averages 3.4 touches in the opposition’s penalty area and takes on 1.15 dribbles per match with 56.3% accuracy. 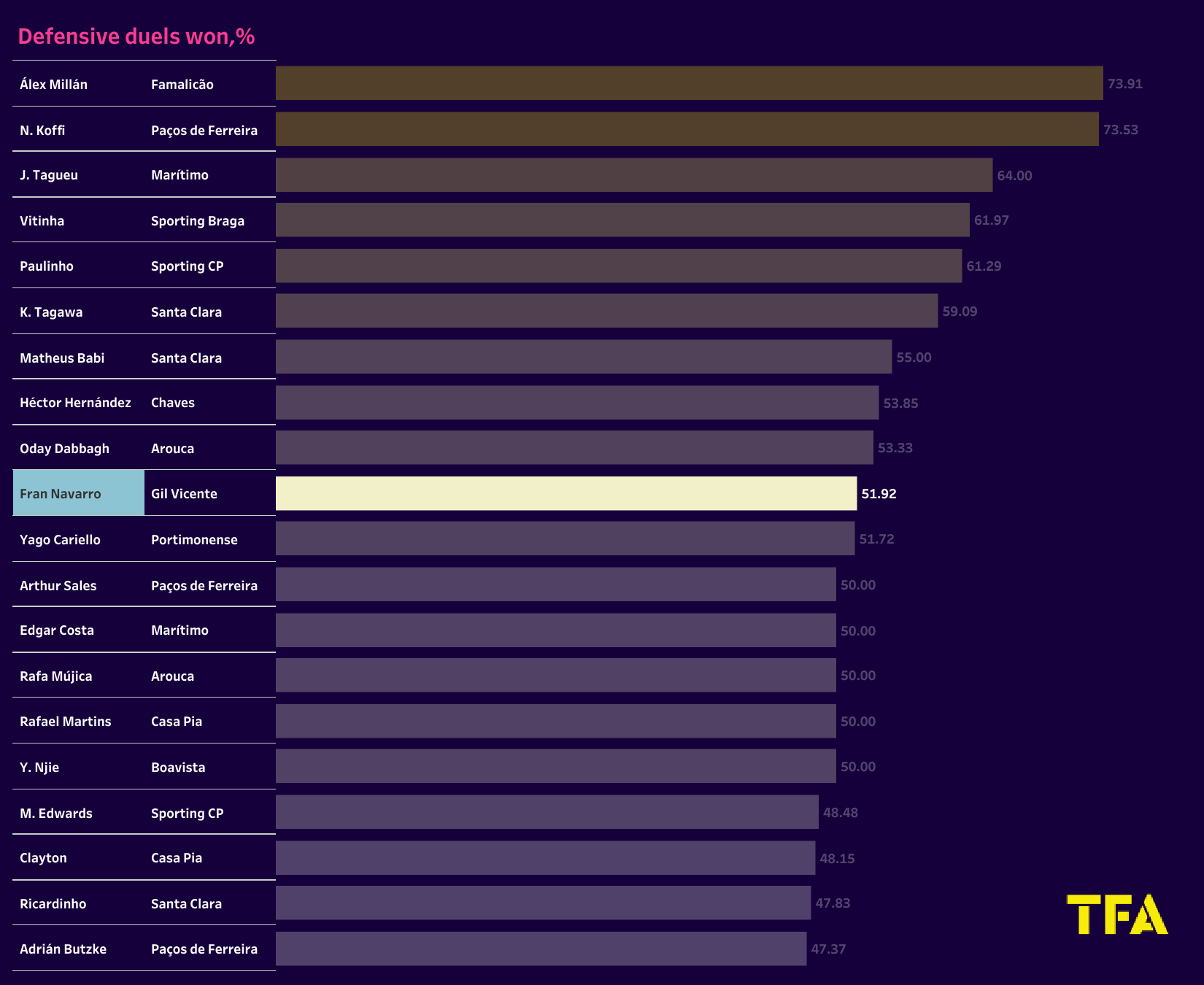 Another aspect of Fran Navarro’s game worth mentioning is his defence. The forward puts in a proper shift by dropping into his own half to support the team. He contests around 3.8 defensive duels with a 52% rate of success and 3.9 loose ball duels per match with a 30% success rate. He also makes 1.4 interceptions and 2.15 possession recoveries in the opposition half per match.

Despite scoring the majority of the goals, Fran Navarro plays a much more extensive role for Gil Vicente than a traditional no. 9. The 24-year-old is arguably the team’s best player and the only bright spot in an overall disappointing season so far. The Gilistas need to draw some inspiration from their star striker to turn around their fortunes and survive the relegation scare.