FC Famalicao is one of the teams in Liga Portugal that is usually in or around the top half of the table. The club’s best season in recent history came in 2019/20 when it finished sixth in the top flight after gaining promotion the season prior. In the last two seasons, the club finished eighth and ninth with a diminished point total. However, this year has proven worse as the Famalicenses languish two points above the relegation zone with 13 games played.

Famalicao is currently one spot above the danger zone in the 15th position with 11 points. They have lost eight, drawn two, and won three matches. The team experienced a managerial change going into the season and also lost a crucial midfield figure in Charles Pickel during the summer transfer window. With the Liga Portugal 2022/23 season returning to action, Famalicao’s task in hand will be to stay out of the drop zone. Let’s now look at some stats that show how Famalicao have performed so far this season.

Overview of Famalicao’s performances this season 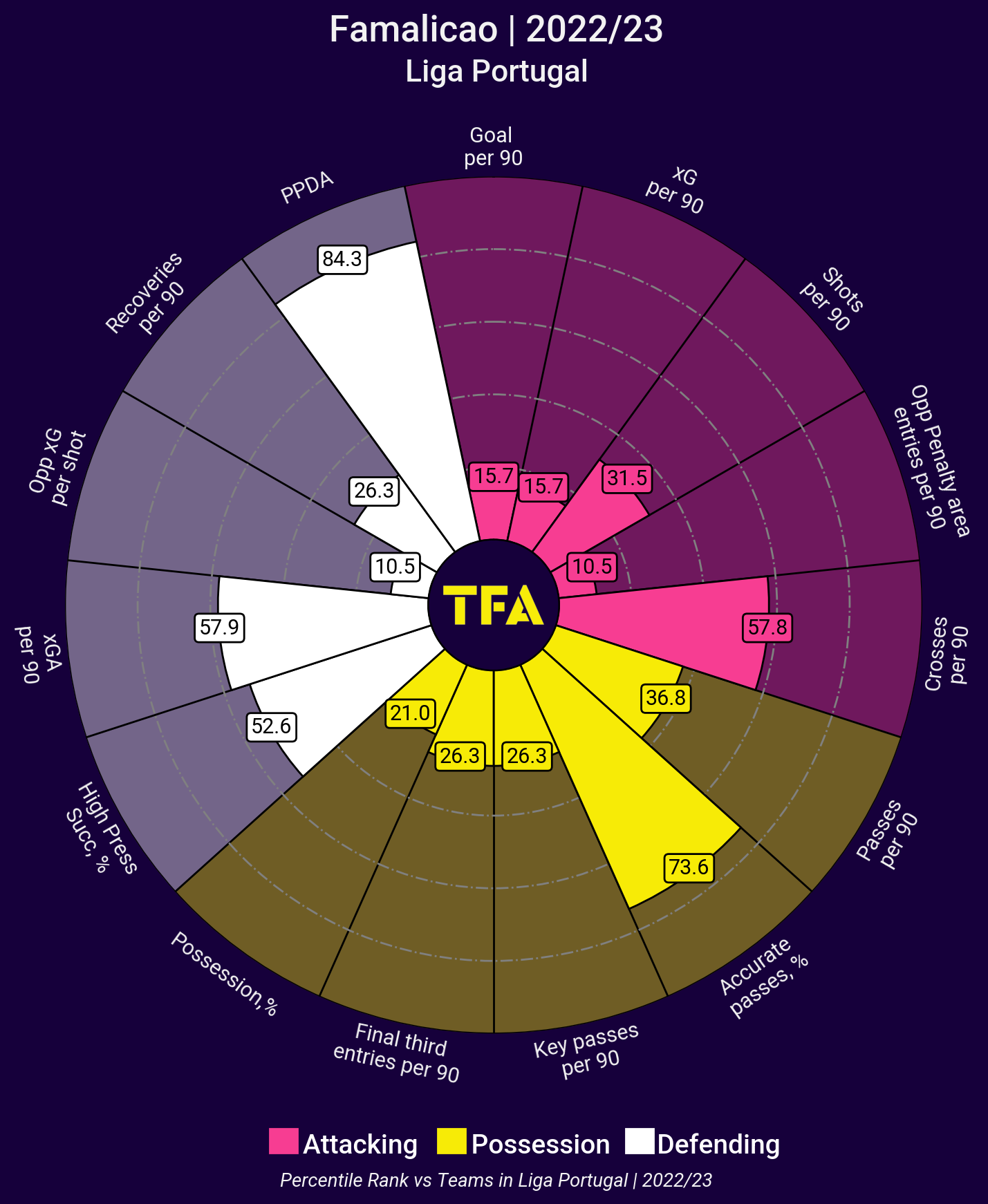 Famalicao started the season in poor fashion and has struggled to conjure up a sustained run of form. In their last five league matches, the team has one win, one draw, and three defeats. The Famalicenses have a horrible record on the road with only two points from seven matches. Meanwhile, the three wins so far have come from six home matches.

The viz above shows the percentile rank of the team’s stats in comparison to other teams in the league. We can observe the team underperforming substantially in all three departments: attack, defence, and possession. Famalicao possesses a very low rank with respect to goals, penalty area and final third entries, key passes, and the expected goal-against tally. While they seem to be doing decently in terms of accurate passes, a high pressing success rate, and crosses, their overall stats are underwhelming. 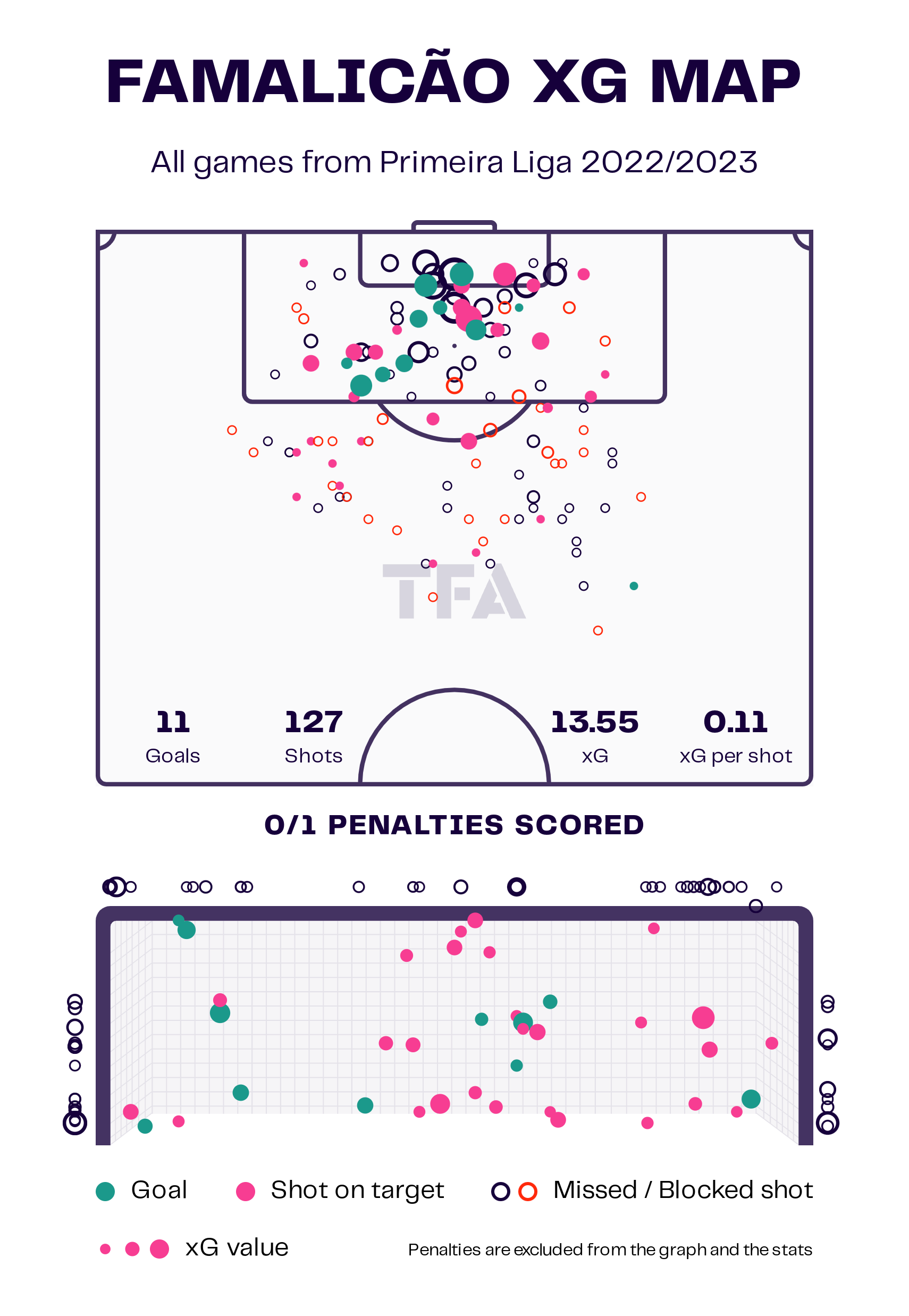 The 11 goals scored by Famalicao are the joint-third-lowest in Liga Portugal 2022–23. They are underperforming their xG per 90 value of 1.1 with only 0.84 goals scored per match on average. Alex Millan has been the team’s top scorer with two goals and an xG of 2.8.

Famalicao averages 9.85 shots per match with a 31.3% success rate. The viz above shows the team’s shot map from this season. We can observe many of their shots from the penalty area, many of which miss the target or are blocked. They have also tried their luck from a distance but without much consequence. The numbers reflect their lack of threat in front of the goal and their inability to convert chances. 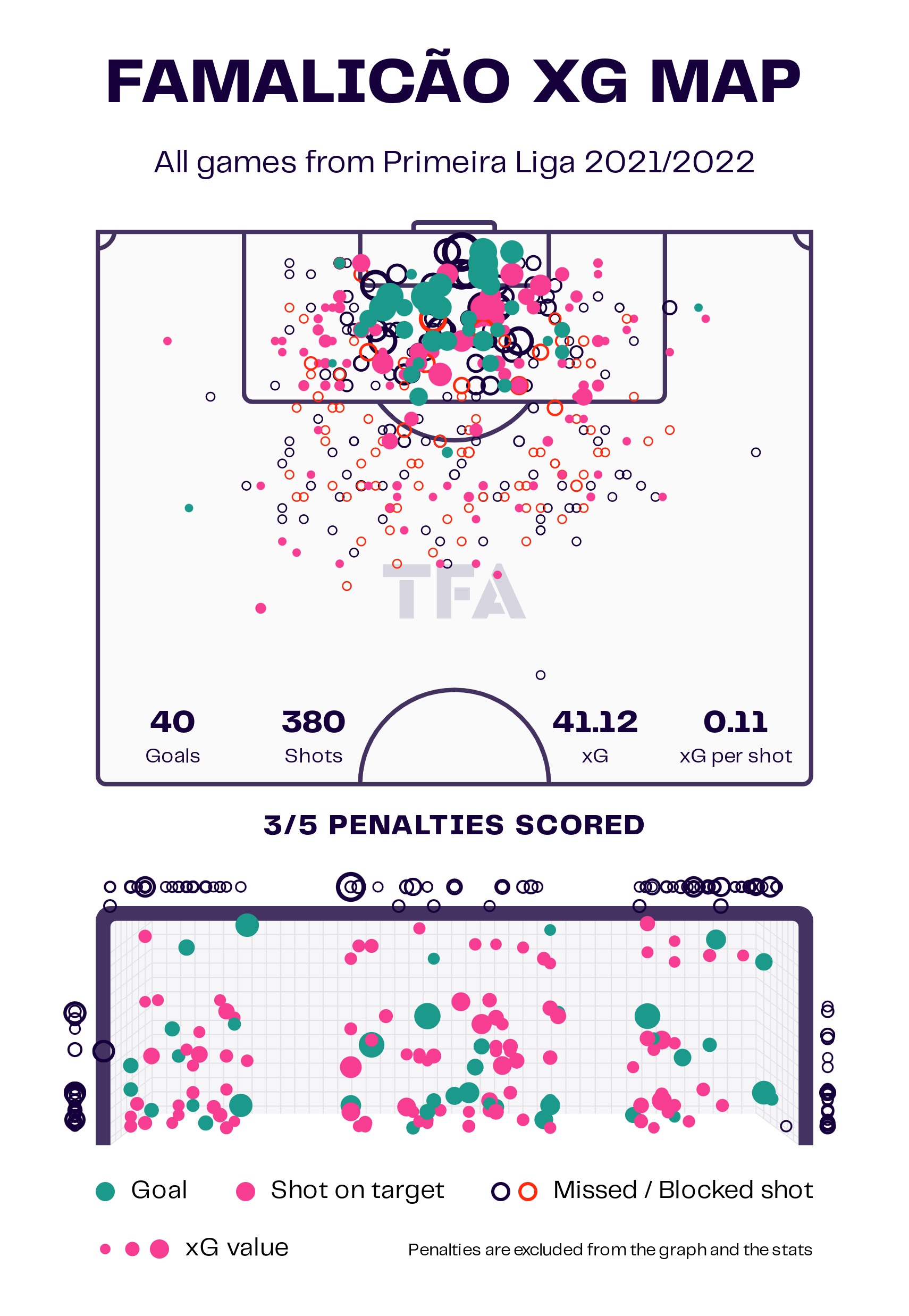 When compared to the Liga Portugal 2021/22 season, Famalicao scored 45 goals with an xG per match value of 1.4. They scored at a rate of 1.32 goals per match and took an average of 10.5 shots per match, with a similar accuracy rate of around 31%. There is a clear contrast in terms of the decline in the team’s attacking output this season. 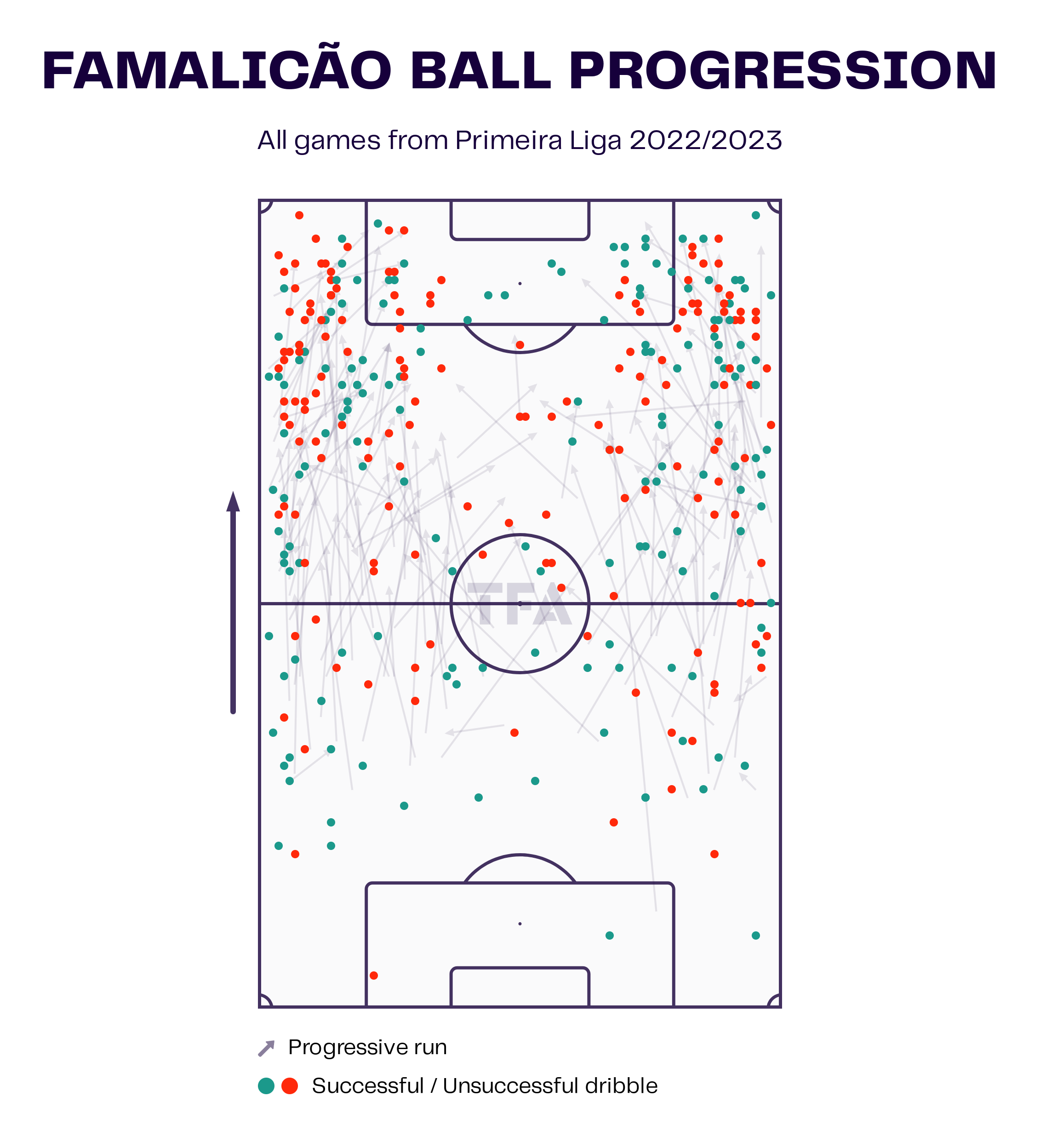 The above viz represents Famalicao’s overall ball progression in Liga Portugal 2022/23. We can observe the team not making much use of the central attacking zones and instead progressing up the pitch using wider areas. Famalicao averages 27 positional attacks and 1.15 counterattacks per match, with an efficiency rate inferior to most other teams in the league. While they enjoy a decent accuracy rate of 63% on dribbles, the number of times they attack through the central zone per match again stands low at a count of 16.

Attempts to defend the goal 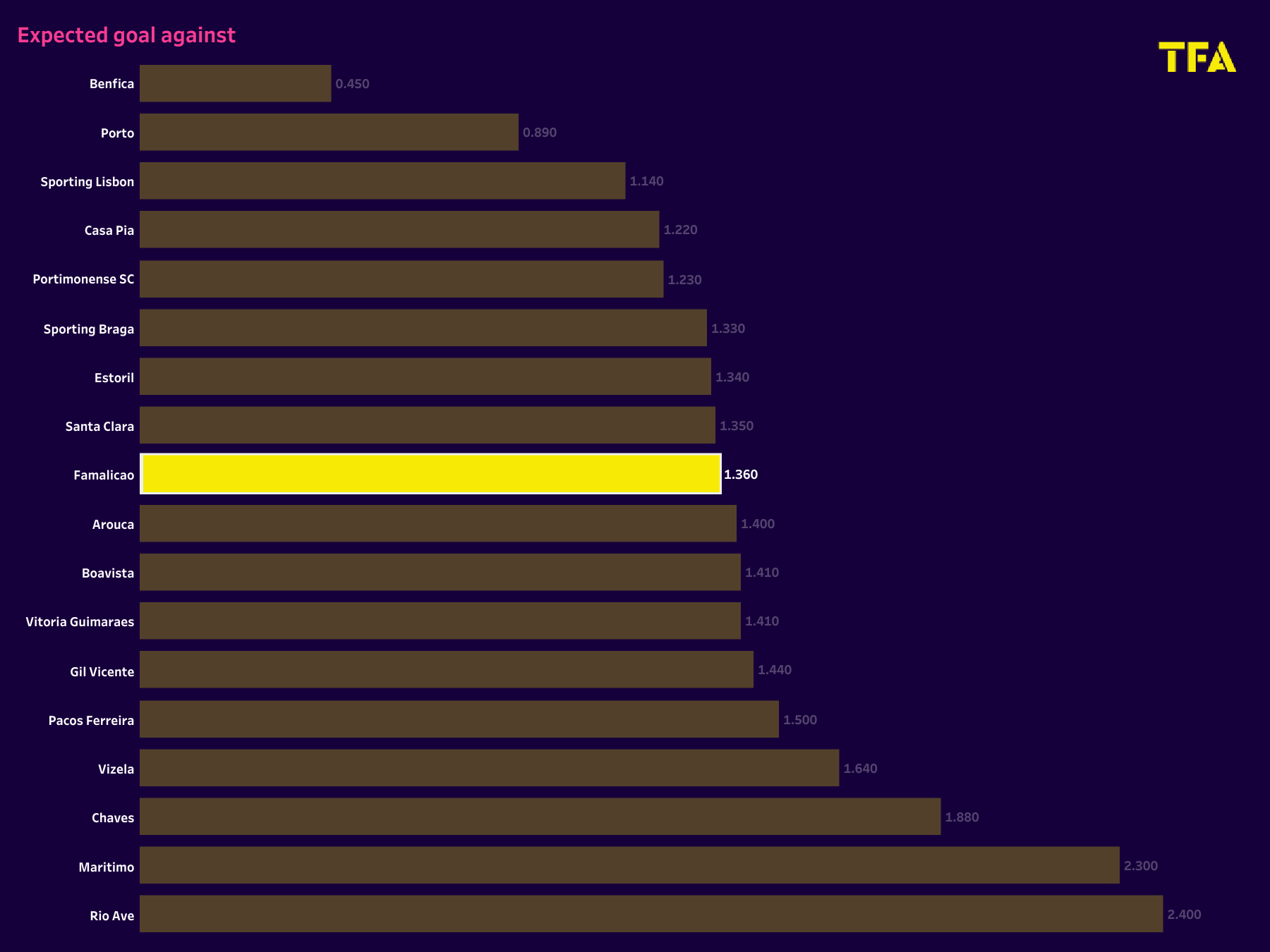 Famalicao’s defensive department has not been the worst in the league, but it has not been impressive either. They have conceded 18 goals in 13 matches and have a goal difference of minus seven. With an average of almost 1.4 goals conceded per match, they are letting in goals at a slightly higher rate than their current xGA per match value of 1.26.

The viz above illustrates Famalicao’s defensive territory in Liga Portugal 2022/23. We can see the team making lots of defensive actions in the defensive third and even inside their penalty box. They make ten recoveries in the opposition half per match, along with 50 interceptions. The team wins 55% of their defensive duels—almost on par with the other teams in the league. Furthermore, they win 46% of their total aerial duels contested and possess a pressing efficiency of 44%.

In comparison to the 2021/22 season, Famalicao conceded 51 goals throughout their campaign with a goal difference of minus six. The team let in 1.5 goals per match on average, a figure slightly higher than their current one. While there isn’t much difference in these defensive stats, they do need to tighten their backline to increase their points differential over the relegation zone.

The Famalicenses need to create some momentum and form to separate themselves from the drop zone. Once Liga Portugal resumes, they will have to show much-needed improvements in their overall performance to extend their stay in the Portuguese top division.