FC Porto player Evanilson has emerged as one of the young stars of Liga Portugal in recent times. He signed for Porto from Brazilian club Fluminense in 2020 and took his time in becoming accustomed to the Liga Portugal action. In the 2021/22 edition, Evanilson enjoyed a breakout season, helping his club secure the league title with 14 goals and four assists.

Some fantastic displays by the 23-year-old forward have earned him plaudits from fans and pundits. His impressive performances in the Portuguese top flight haven’t gone unnoticed, with transfer rumours linking the player with clubs like Arsenal and Manchester United. Let’s look at some stats possessed by Evanilson this season that make him one of FC Porto’s best talents. 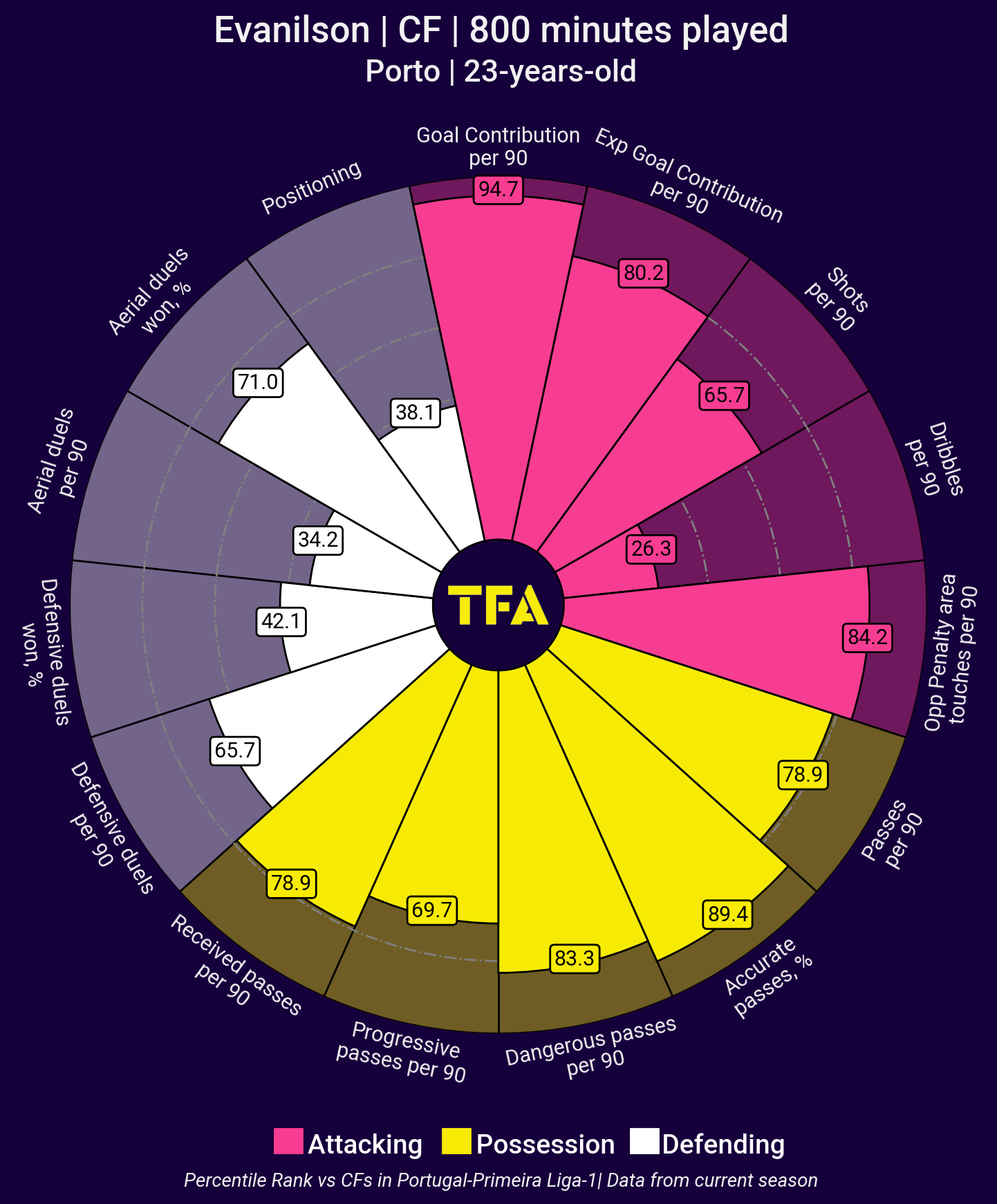 The above viz shows the percentile rank of the player’s stats in comparison to the other centre forwards in Liga Portugal 2022/23. Evanlison’s attacking stats have been instrumental for Porto. He’s at the top for goal contributions and opposition penalty area touches. He also has a significantly high rank in possession stats like accurate and dangerous passes. Two other areas where the player has decent stats are defensive duels and aerial duels. 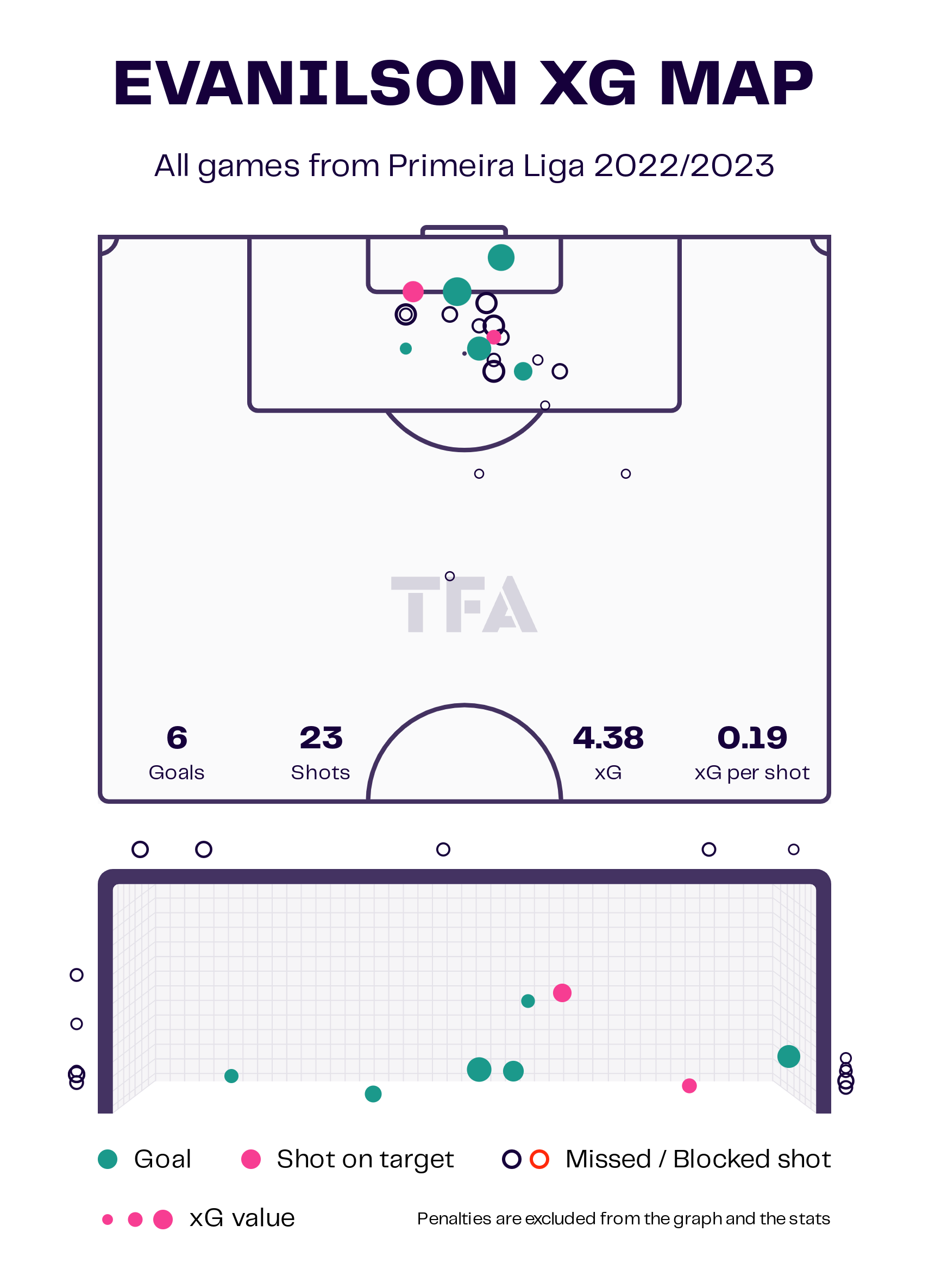 Evanilson has made 13 appearances for Porto in Liga Portugal 2022/23 and provided six goals and three assists. The visual above illustrates the player’s shot map from this season. We can observe that he mostly shoots from dangerous positions inside the penalty box. Two of his goals have come from inside the six-yard box, and the remaining four from within the box. Evanilson has taken a total of 23 shots, for an average of 2.6 shots per match. His xG per match equates to 0.49, which is better than most other centre forwards in the league. 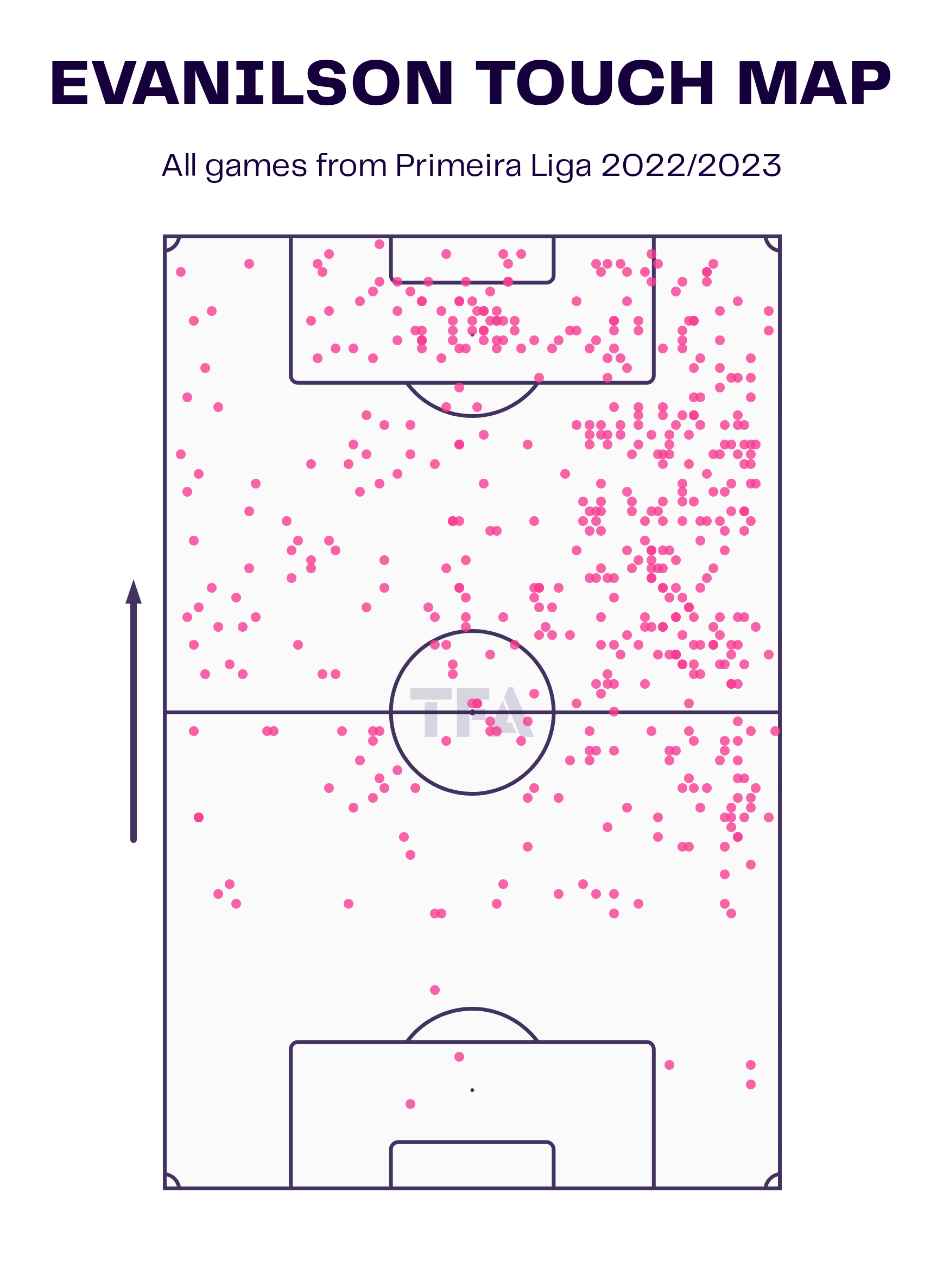 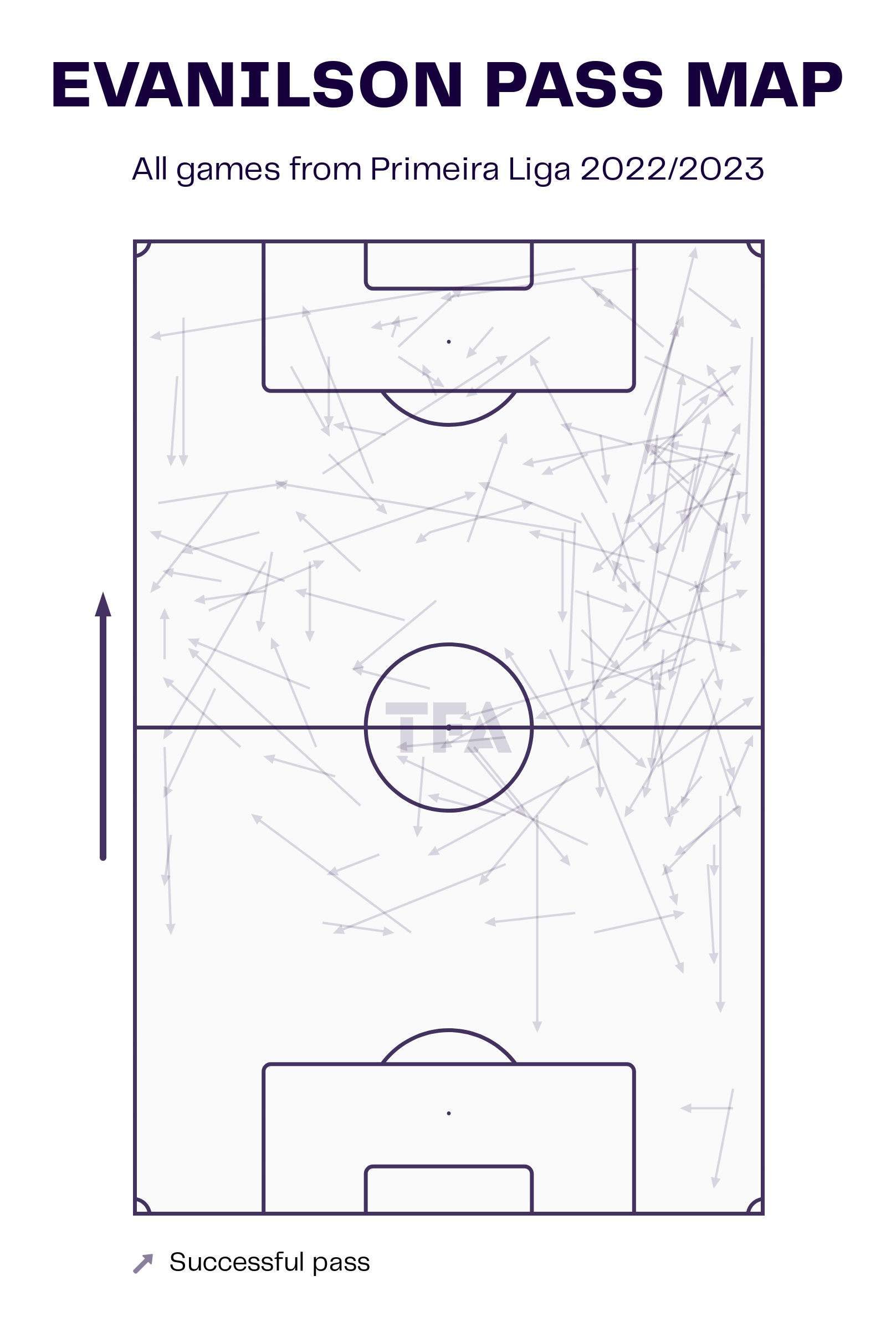 While Evanilson has been handed the role of getting the goals at Porto, he also has the ability to drop deep and build up attacking plays. The visual above maps the player’s touches and passing actions for this season. We can observe that most of Evanilson’s touches on the ball are either in central attacking areas or on the right side of the pitch.

The forward tends to drift wide on occasions to create space for runners from the midfield. When he receives the ball out wide, he looks for a pass rather than carrying the ball into the box. He averages around 19.5 passes and 1.6 progressive passes per match. Furthermore, he enjoys around 17 touches in the final third and 5.7 touches inside the penalty box per match. 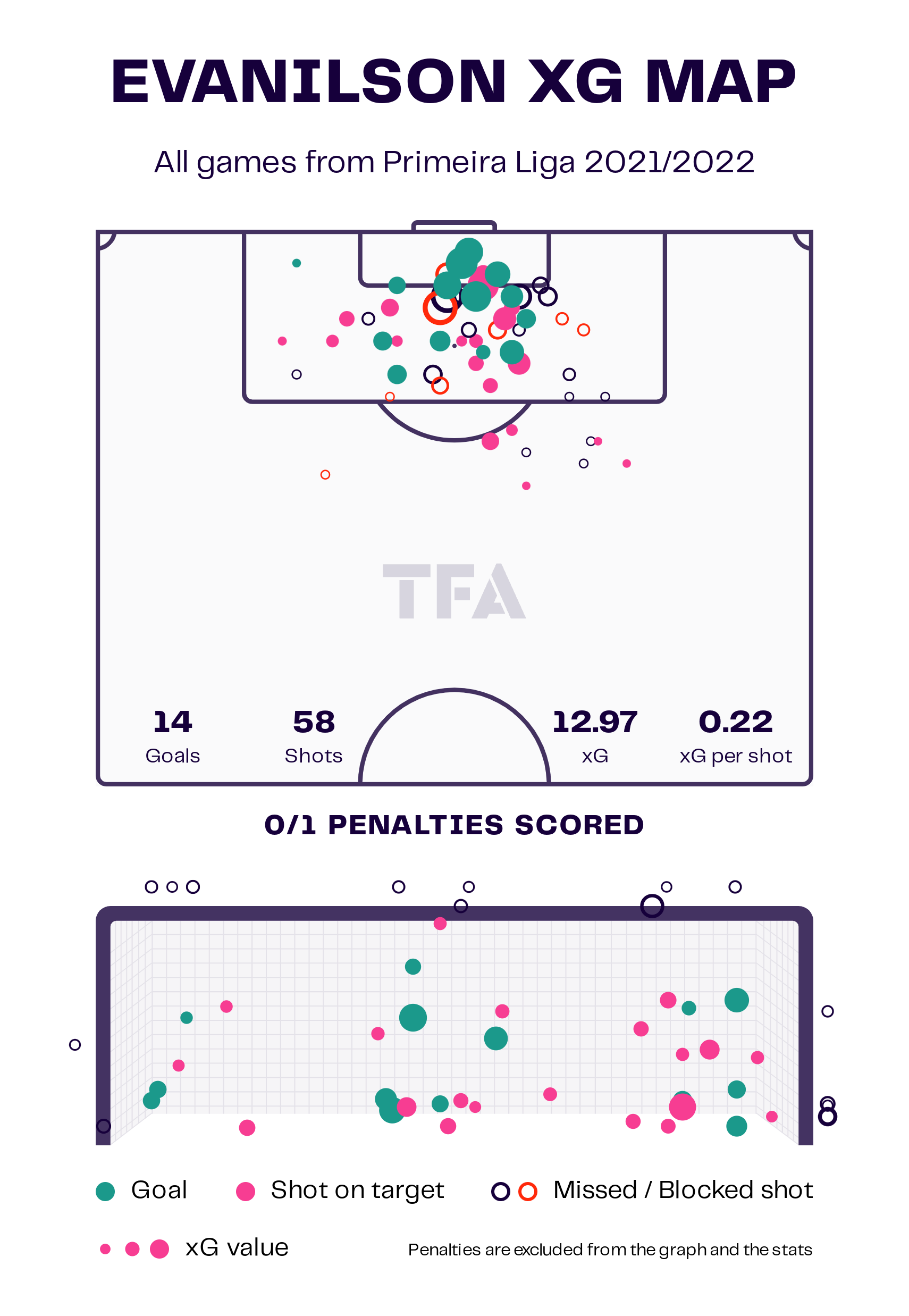 When compared to last season, Evanilson made 30 appearances in the league, scoring 14 goals along with 4 assists. The shot zones across both seasons bear similarities, but his conversion rate and scoring frequency have improved slightly. The passing and possession stats have also progressed slightly since last season in areas like touches and key passes. The forward appears to be on track to increase his goal and assist totals from the 2021-22 season. 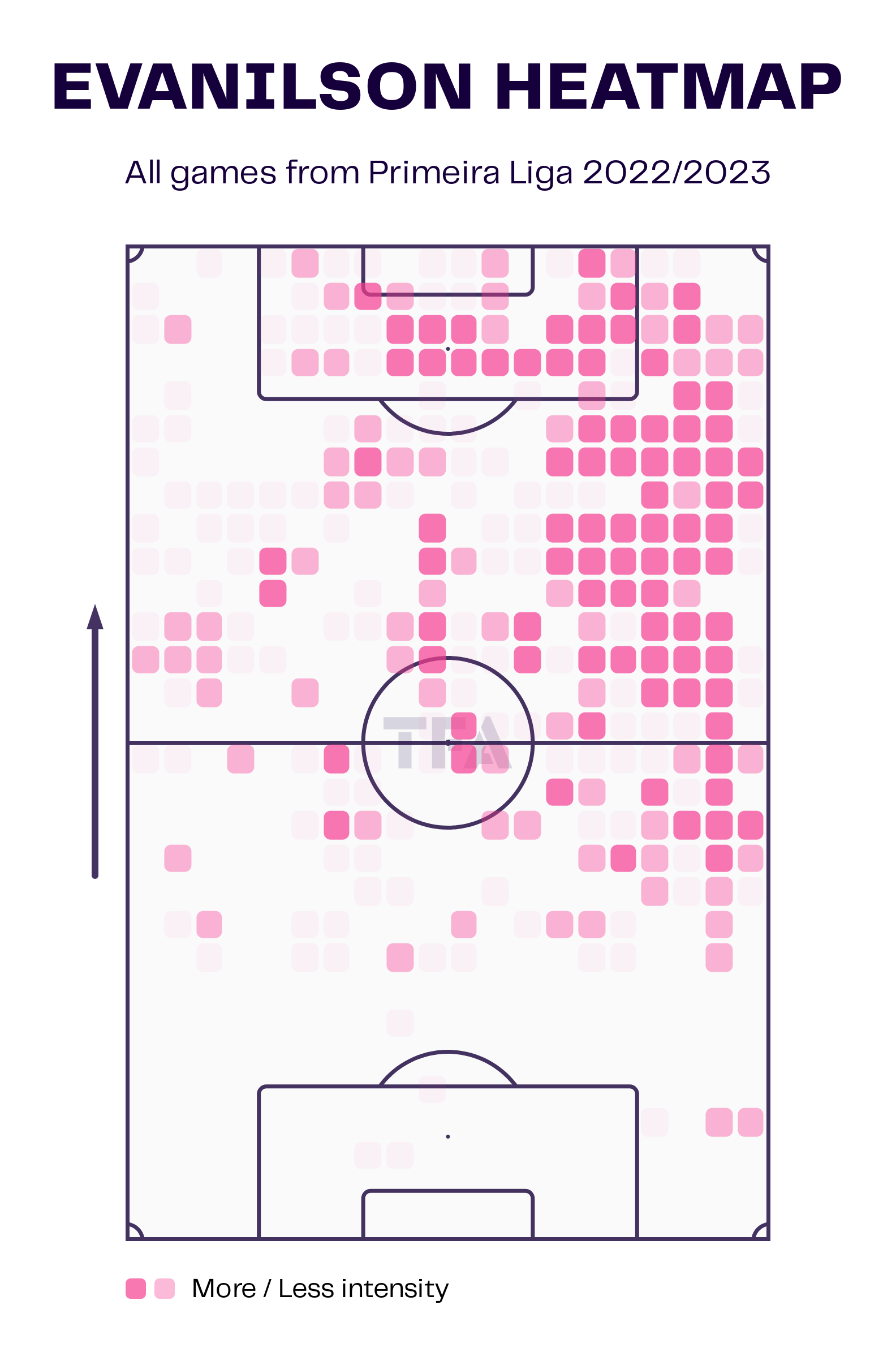 The heatmap depicted above is for Evanlison’s 2022-23 Liga Portugal season with FC Porto. It is evident that the player covers a lot of ground in the middle and final third, particularly on the right side. He also displays the most intensity on the right side of the pitch as well as in the penalty box. Despite being a forward, Evanilson often helps out with defensive duties at midfield. He possesses a knack for contesting in defensive duels and has a 40.5% rate of winning aerial duels. 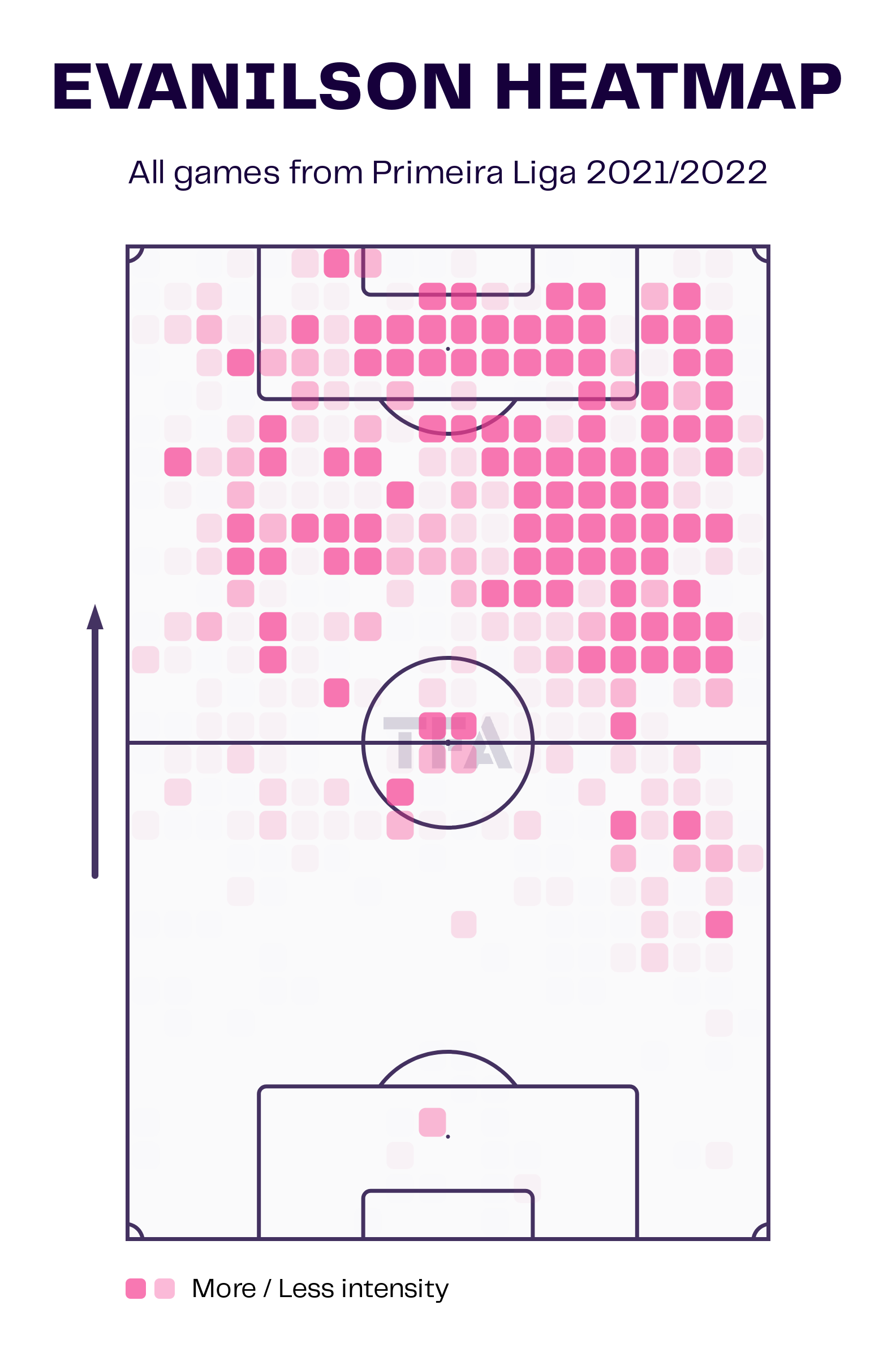 The player’s heatmap for Liga Portugal 2021/22 demonstrates that Evanilson was more engaged in proceedings in the final third. He possessed more intensity in the box as well as in central attacking areas of the pitch. This highlights a more versatile role undertaken by the Brazilian talent this season as he will be looking to provide additional elements to the team than just goals.

Evanilson is enjoying an impressive season with FC Porto and is on course to better his numbers from the previous season. His physicality combined with his agility with the ball makes him an excellent option for offence. Through his intelligent positioning and movement, he can create spaces for teammates as well as himself. Even when he fails to get on the scoresheet, he contributes to keeping the attacking system operating smoothly.