Estoril Praia is currently experiencing a tough season in Liga Portugal. The club finished in the top half of the standings the last term after winning the second division the season prior and earning promotion. However, Estoril currently sits 13th in Liga Portugal 2022/23, four points above the drop zone with a game in hand. Thus far, the Canarinhos have won four, drawn four, and lost five matches. While they had a decent start to their campaign, their form has faded, with only four points from the last five games.

Estoril have struggled at home, winning one, drawing two, and losing three matches. Alternatively, their away record is somewhat better, with three wins, two draws, and two losses. The Canarinhos underwent a managerial change going into the season and could be in for a difficult second half of Liga Portugal based on their recent signs of struggle. Below are some stats looking at Estoril Praia’s current season in Liga Portugal. 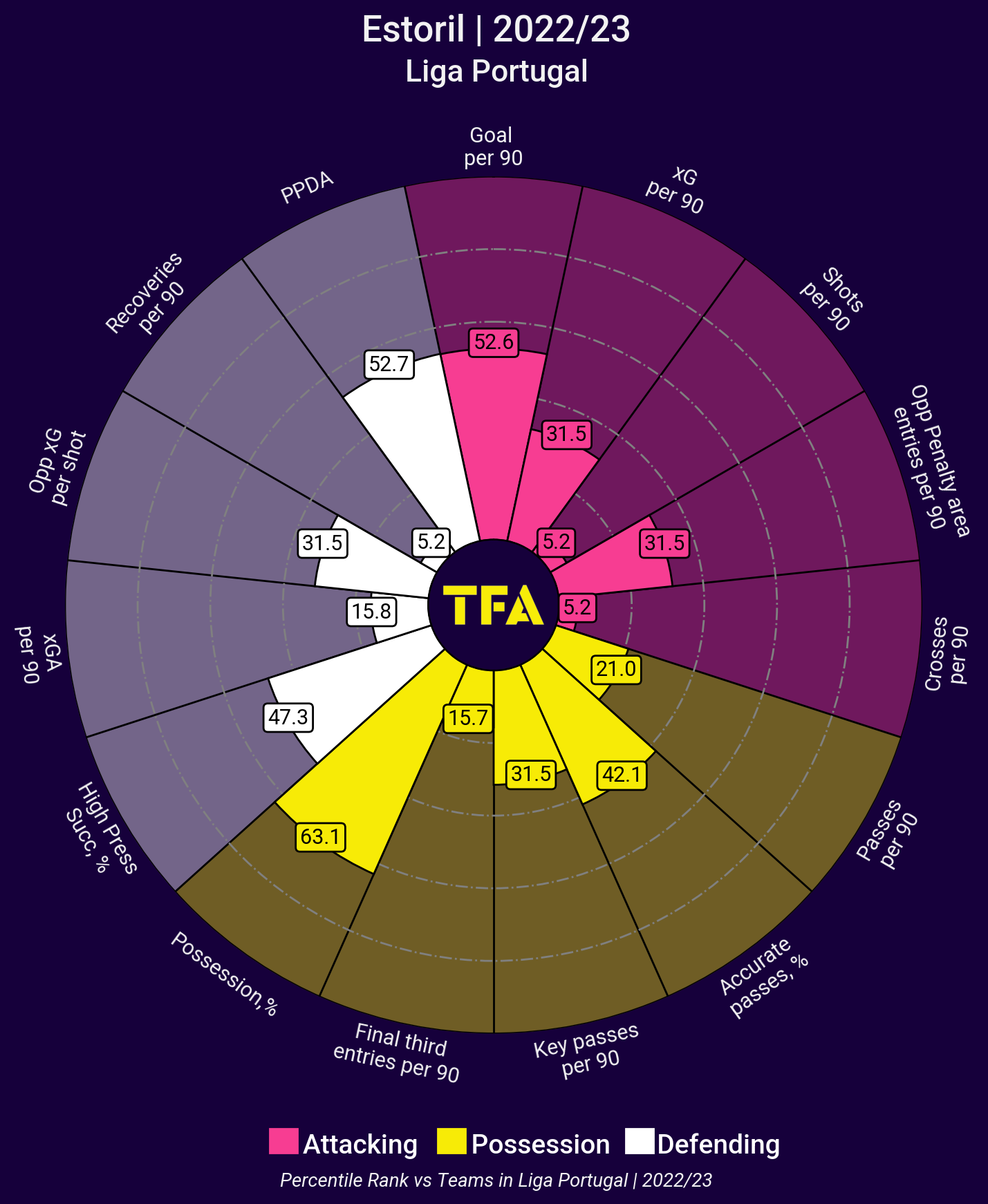 The viz above shows the percentile rank of the team’s stats in comparison to other teams in the league. In the attacking department, Estoril has above-average stats for goals per 90 but is below par in terms of shots and crosses per 90. The team’s passing records possess a similar pattern, with a below-average percentile rank in all indicators except possession rate. Meanwhile, Estoril doesn’t have much to show either in defence, with a poor rank in recoveries and expected goals against (xGA) per game. 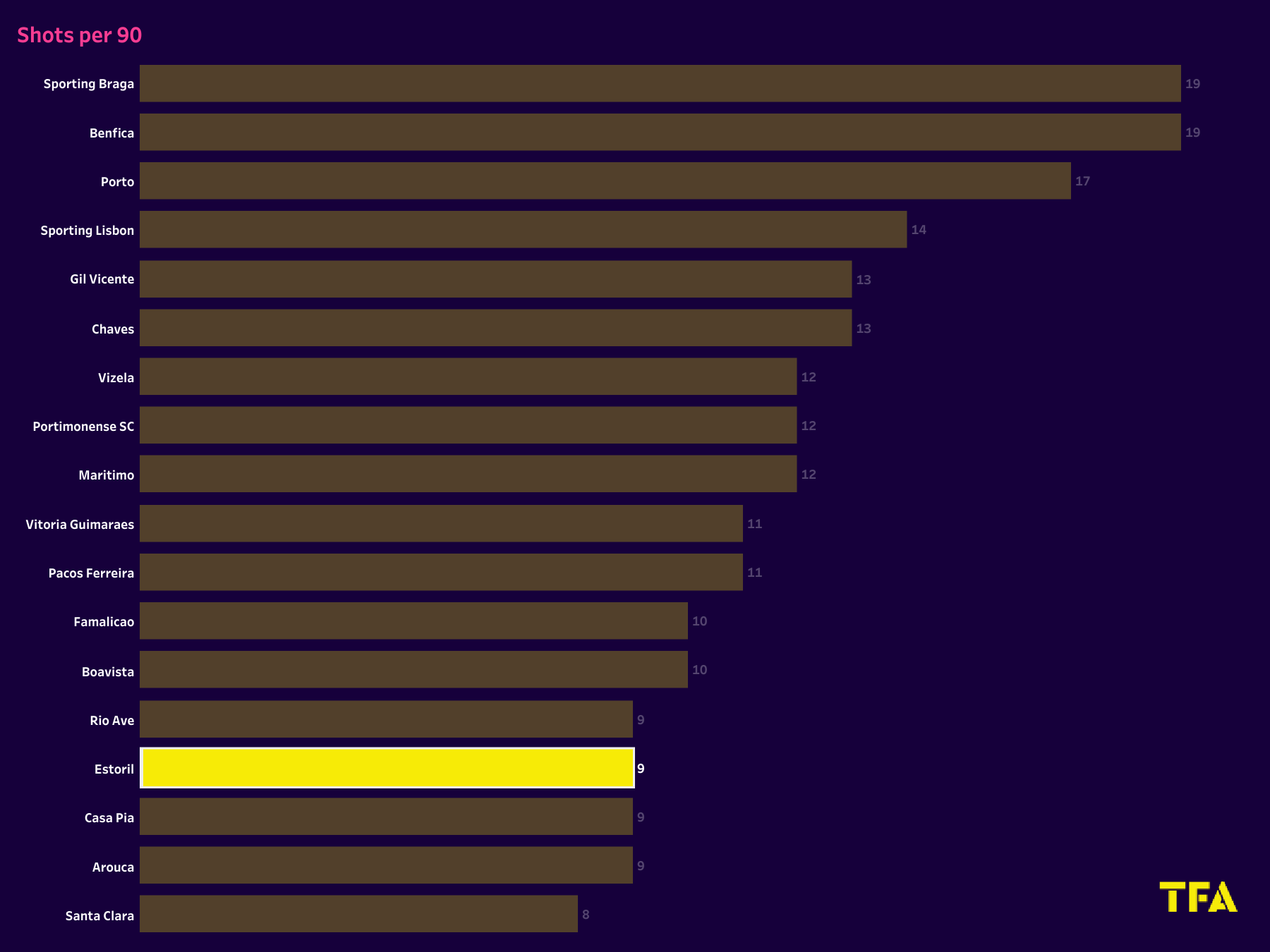 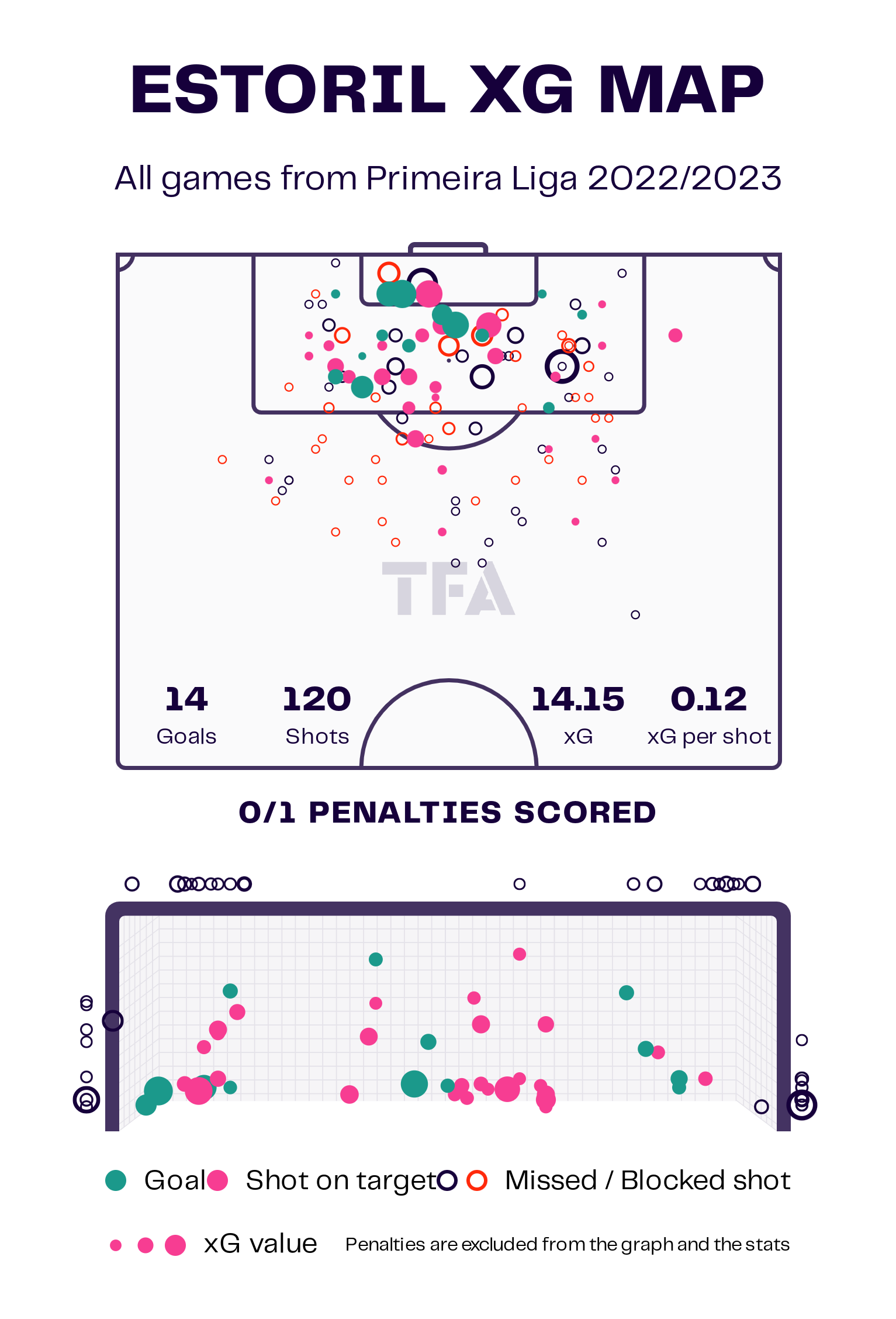 Estoril have scored 14 goals this season with a total xG count of 14.15. It’s a fairly consistent outcome in comparison to teams outside the top four. They are scoring 1.08 goals per match with an average xG rate of 1.15. The team averages 9.31 shots per match with an accuracy rate of 34.7%. Although Estoril have a comparatively inferior number of attempts on goal, they possess a reasonable rate of chance conversion. As seen in the shot map above, the team has done well in terms of scoring all the goals from within the penalty area. Yet a good proportion of their shots, both inside the box and from a distance, can be observed as missing the target or being blocked. 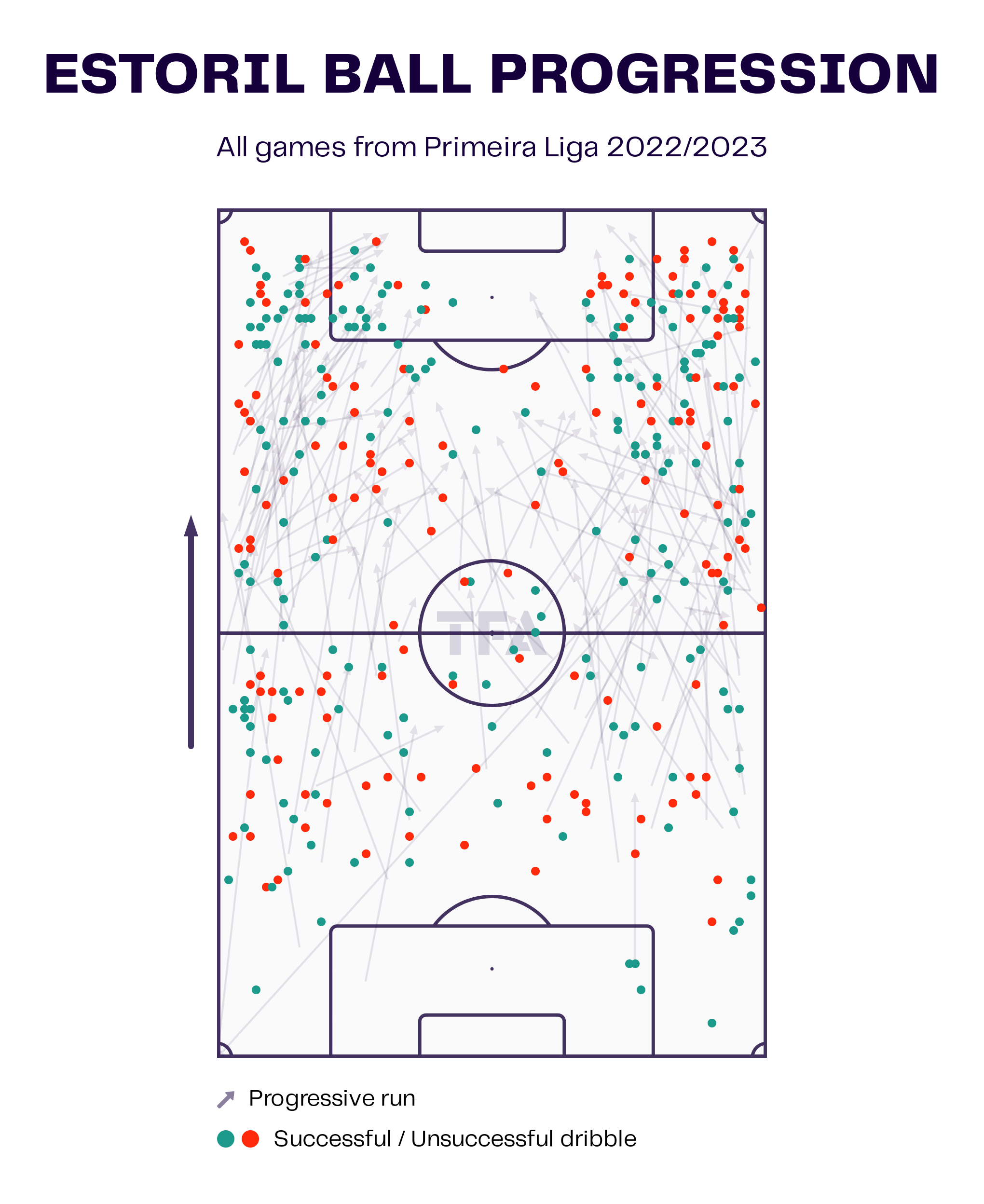 The above viz represents Estoril’s overall ball progression in Liga Portugal 2022/23. We can observe the team’s significant utilisation of the two flanks to progress up the pitch with more effect than the central zones. They create 23.33 positional attacks per match, with 23.2% of such attacks resulting in shots. On the other hand, they launch three counterattacks per match, with 41% of them ending with a shot. While their positional attacks lack efficiency, they pose a much greater counterattacking threat than most teams. 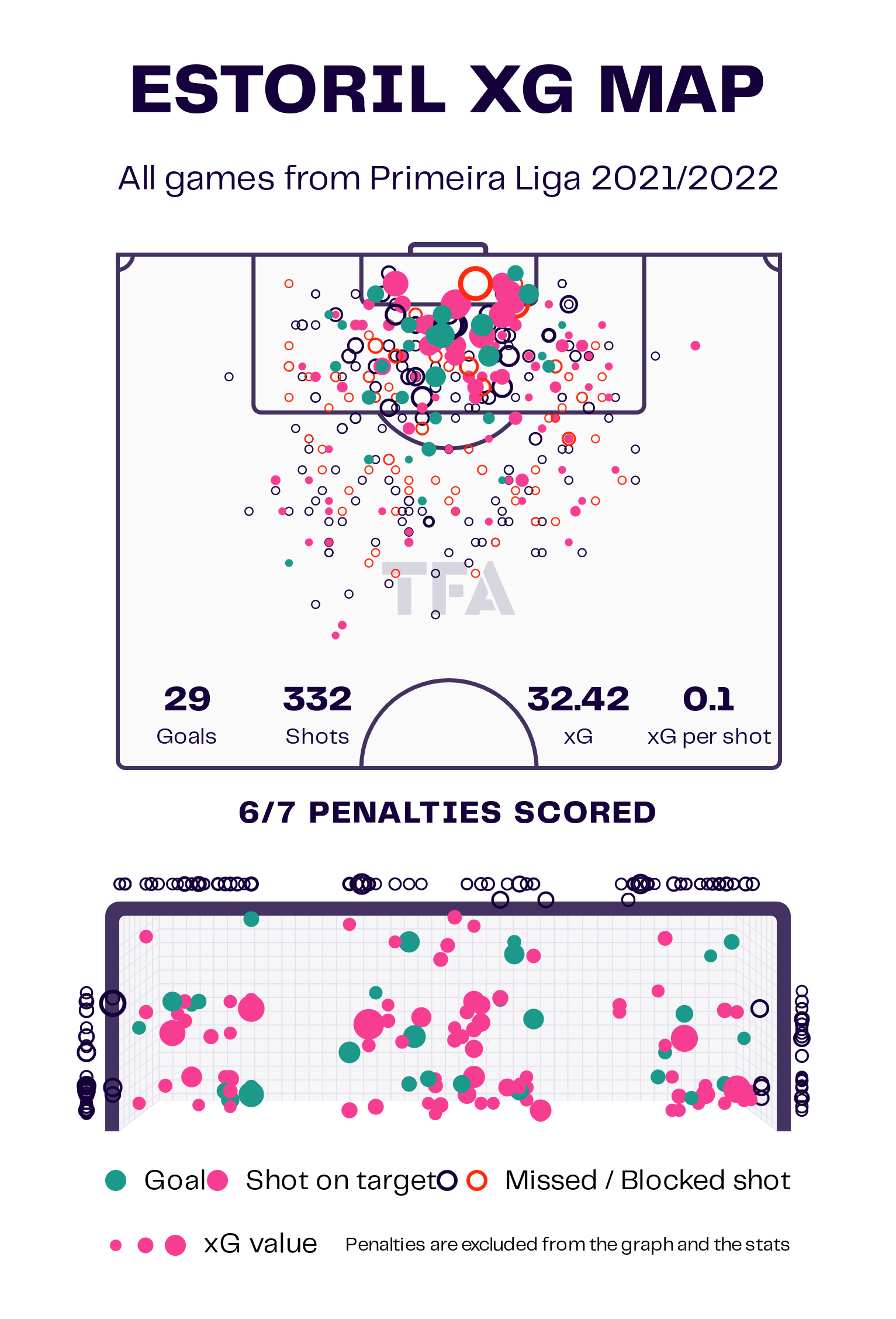 In comparison to the 2021/22 season, Estoril Praia scored 36 goals with an xG per match value of 1.11. They scored at a rate of 1.06 goals per match and took 9.97 shots per match, with an accuracy rate of around 36%. While the team has similar stats in terms of their goal-scoring rate, they were producing slightly better numbers in terms of shots. This highlights the room for improvement in their attacking department going into upcoming fixtures.

Defence can tighten up 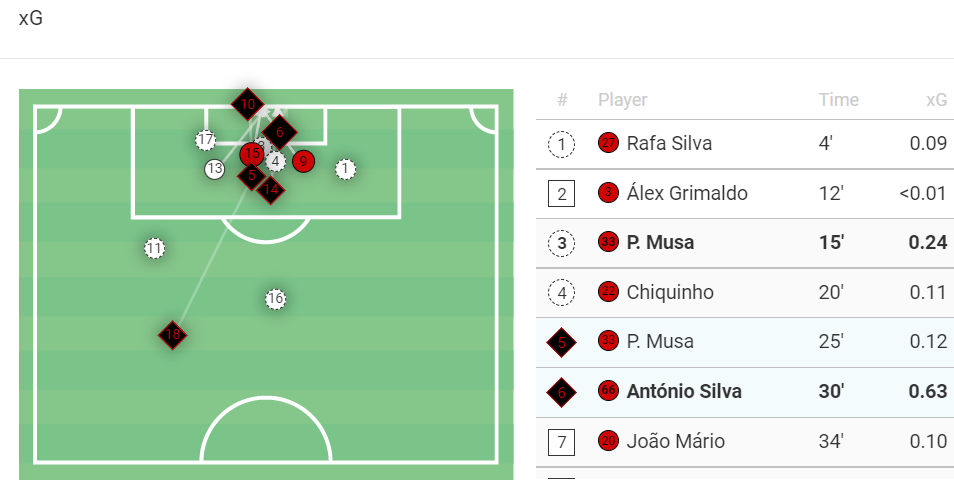 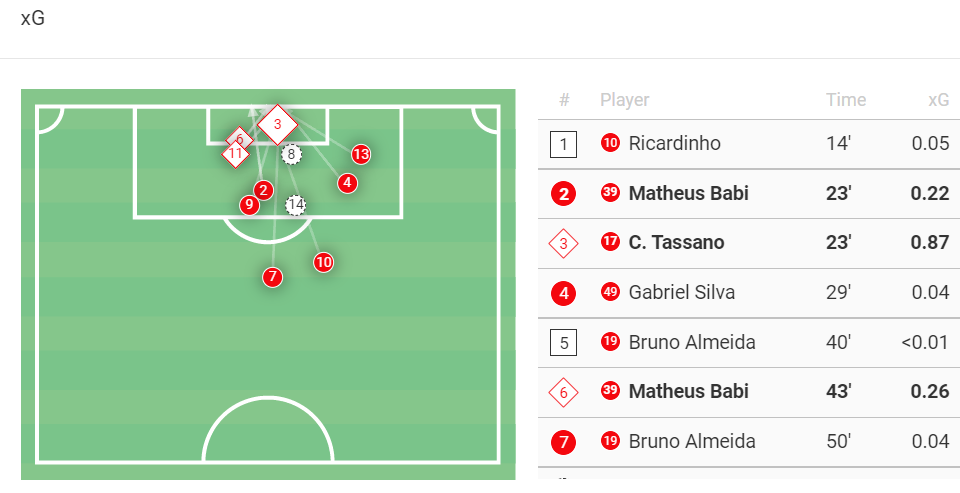 Defence is another department where Estoril will be keen to do better. Thus far, they have conceded 18 goals and have a goal difference of minus four. They concede 1.38 goals per match and have a much higher average xGA of 2.08. The two visuals above show the shot maps of Estoril’s last two opponents in the league. Estoril allowed eight goals in their last two matches against Benfica and Santa Clara, scoring only two in return. They have conceded a lot of shots from dangerous positions inside the box, which explains their inflated xGA rate. 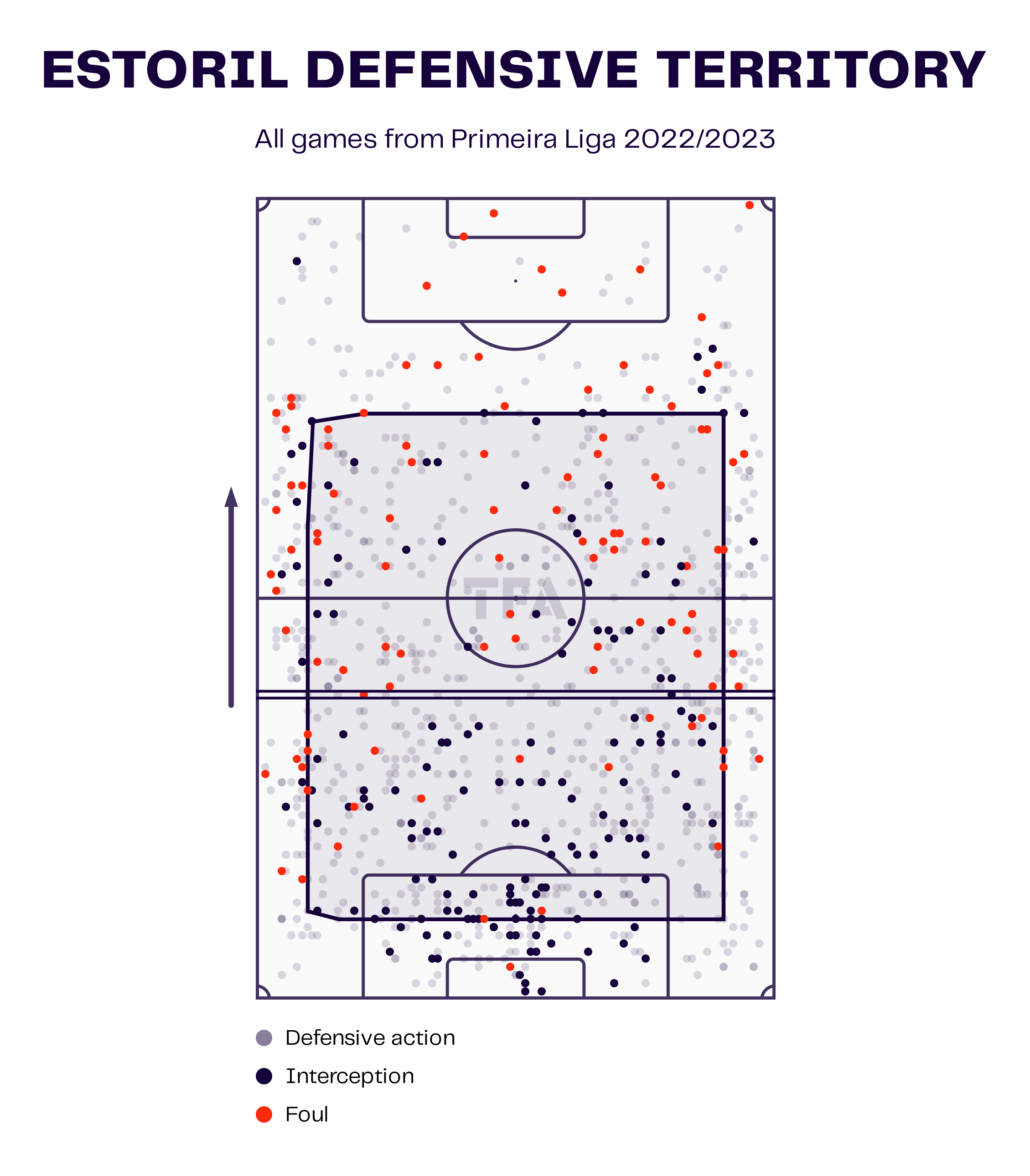 Meanwhile, the viz above illustrates Estoril’s defensive territory in the current Liga Portugal season. The team possesses a comparatively low defensive line and makes lots of defensive actions in the defensive third and even inside their penalty box. They make 42.15 interceptions and 14.85 fouls per match on average. The team wins 55% of their defensive duels and 45% of their aerial duels. Furthermore, Estoril possesses a pressing efficiency rate of 42%. It is important to note that these defensive numbers are inferior to most other teams.

Compared with last season, Estoril conceded 43 goals throughout the campaign with a goal difference of minus seven. The team let in 1.26 goals per match on average, a figure lower than their current rate this season.

The current season is far from over, and Estoril will be keen to sharpen their attack and tighten their defence in the upcoming matches. They will need to conjure some momentum and form going into the second half of Liga Portugal to boost their chances of yet another top-half finish.