David Neres‘ move to Liga Portugal was one of the prominent transfers of the summer of 2022. He is a player who has tasted success both at the club and national levels. Neres initially established himself as one of the most promising young wingers at Ajax. The 2017-18 Eredivisie season was his best thus far, where he scored 14 goals along with 13 assists. However, Neres encountered injury issues in the following seasons, which limited his game time and brought about a decline in his performance. This resulted in the player moving to Shakhtar Donetsk before Benfica decided to bring in the former Ajax winger for a reported fee of €15.3 million.

Currently, Neres is amidst an impressive season with four goals and two assists to his name as Benfica sits atop the Liga Portugal table. He has also contributed with a goal and an assist in the UEFA Champions League 2022/23, as the Eagles qualified for the knockout stages as group winners. Below are some stats that capture the fine season David Neres is having with Benfica in Liga Portugal. 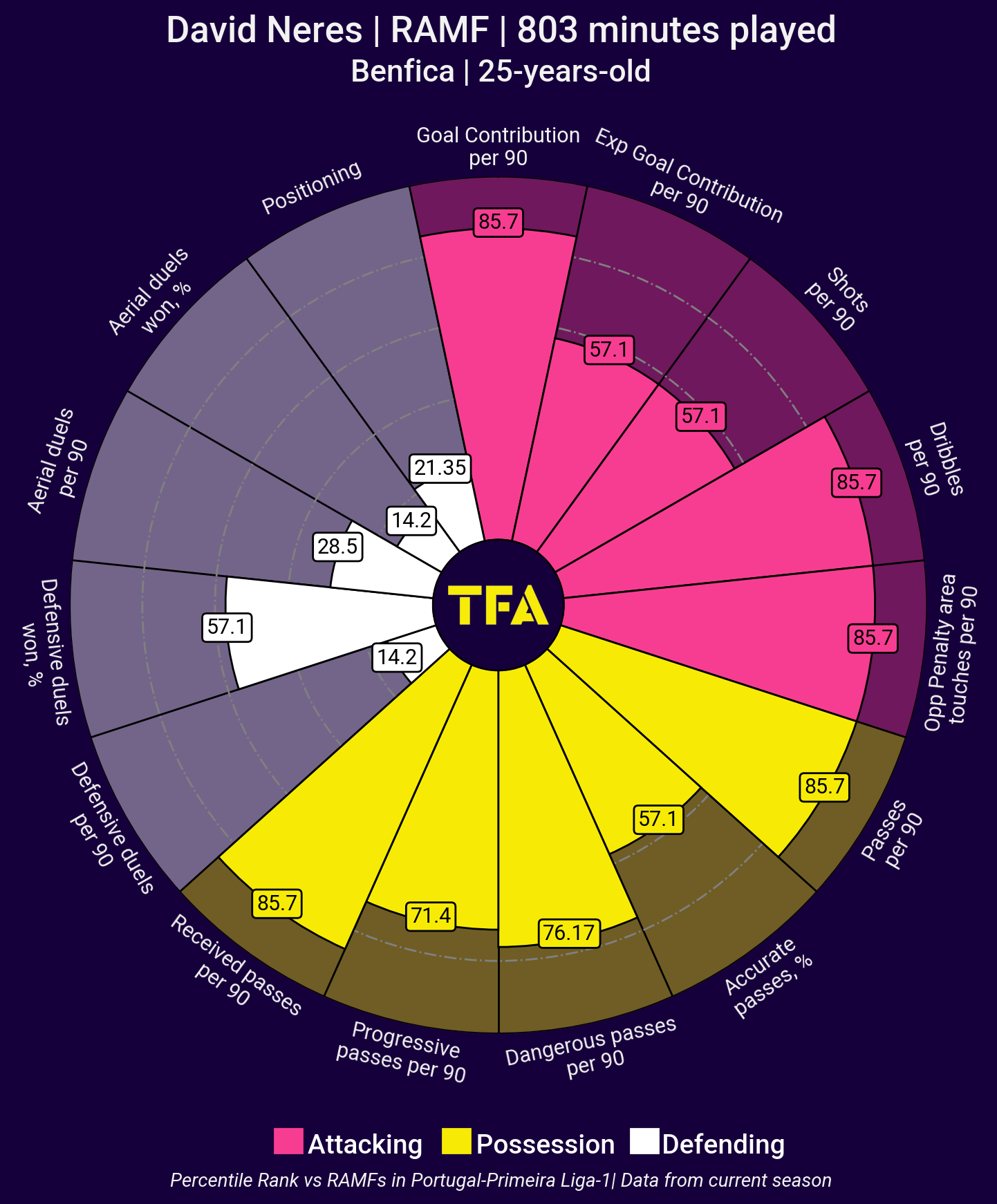 David Neres has played 11 matches for Benfica this season, starting nine and coming on as a substitute in two matches. The Brazilian averages 69 minutes per game; he has four goals and two assists in the league. The above visual shows the percentile rank of the player’s stats compared to other right-wingers in Liga Portugal.

We can observe that Neres possesses excellent stats in the attacking and possession departments. He ranks in the top 85.7 percentile for dribbles, goal contributions, and penalty area touches. Meanwhile, his passing records are also fantastic, with a similar rank under various types of passes and received passes. While defending isn’t Neres’ strong suit, winning defensive duels is an additional area where the 25-year-old does decently. 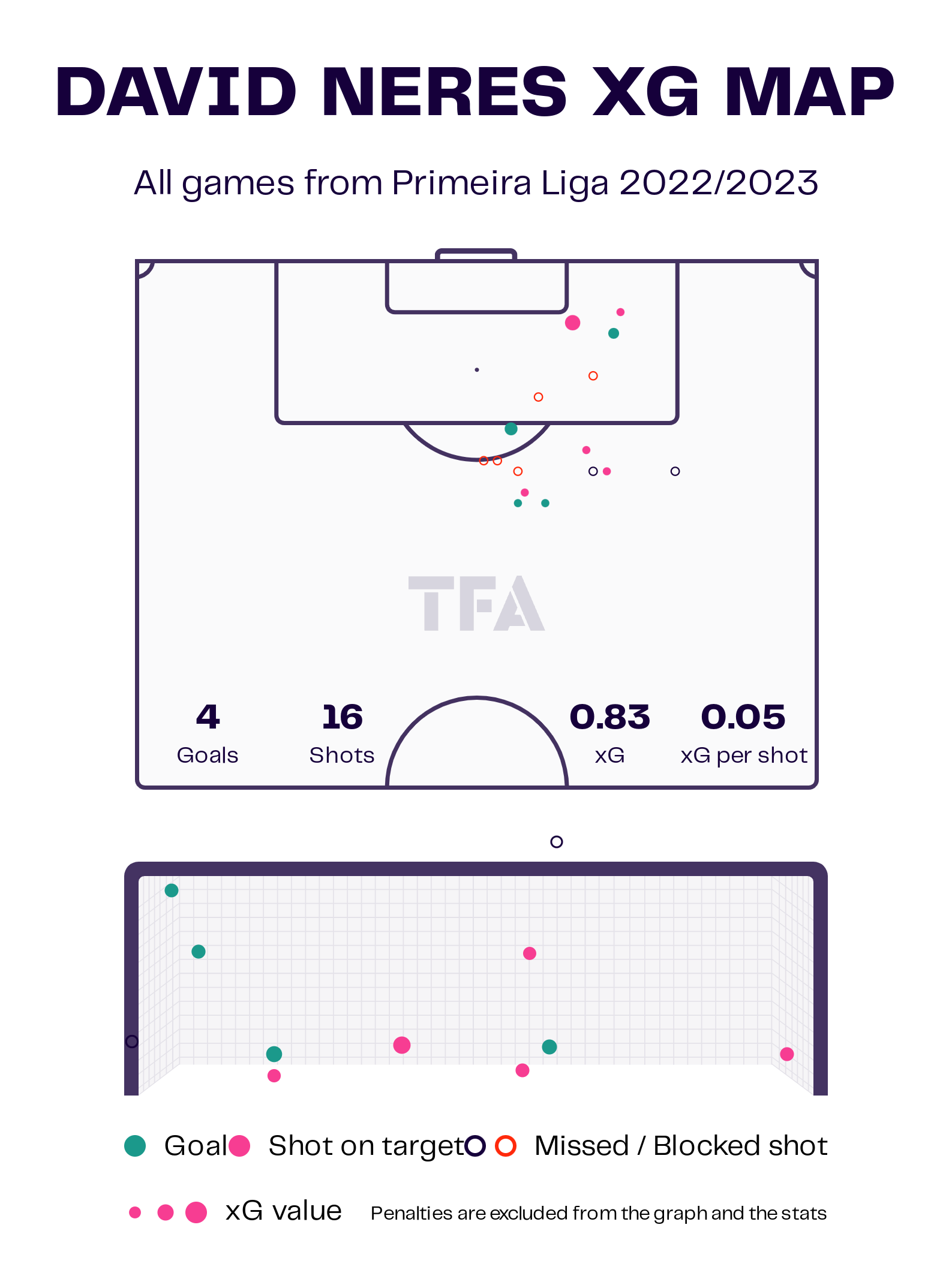 With four goals to his name, David Neres has adjusted well to his new life at Benfica in Liga Portugal 2022–23. His current average of 0.45 goals per match is one of the highest among other players in a similar position. The viz above depicts the player’s shot map from this season. He has attempted 16 shots, with the majority of them coming from the edge of the penalty area on the right side. While two of his goals have come from inside the penalty box, the other two have come from outside the box. He takes an average of 1.8 shots per game with an accuracy rate of 56.3%. Currently, he possesses an average xG rate of 0.10. 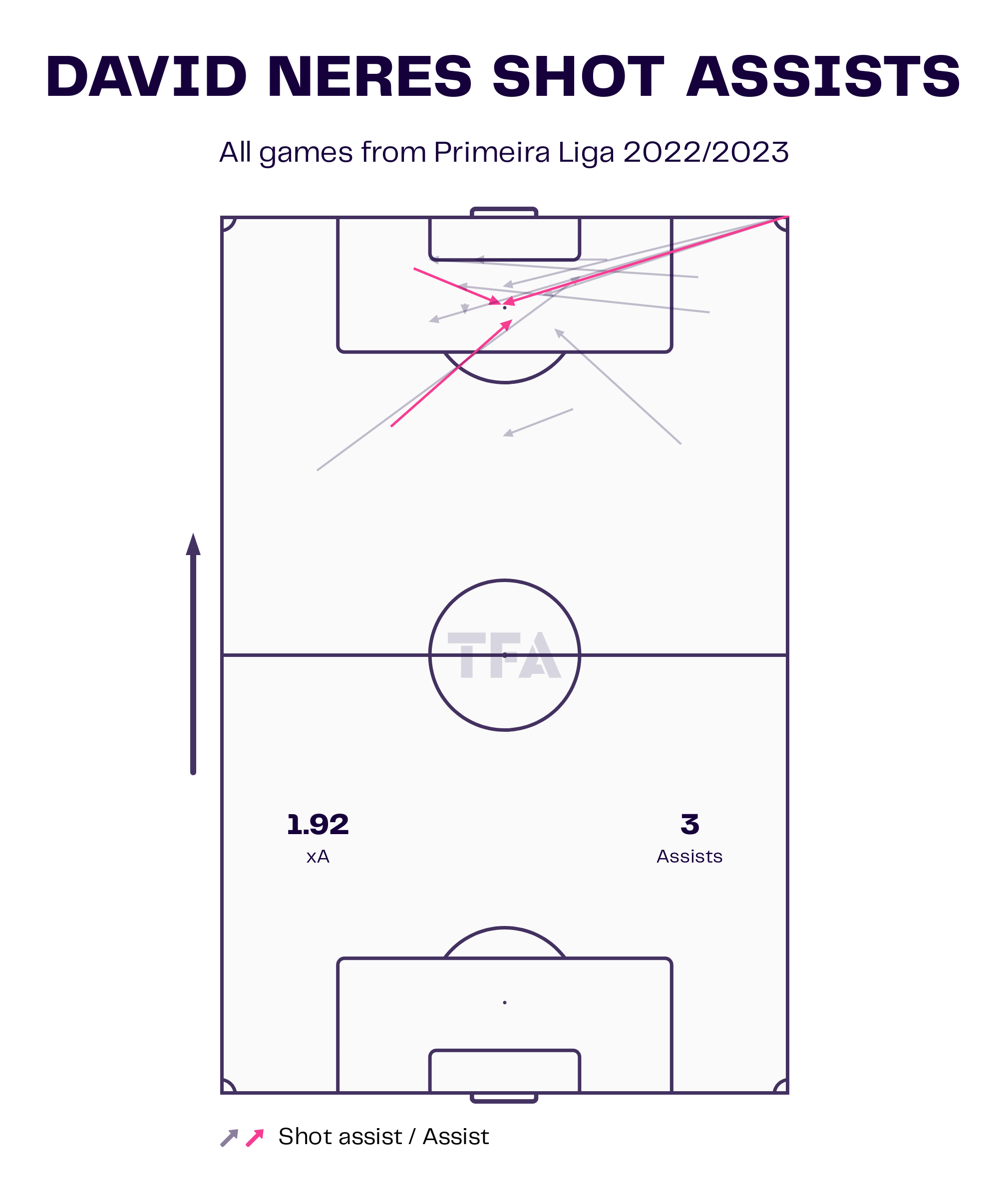 Another important aspect of Neres’ game is his ability to set up his teammates. Thus far, he has two assists under his belt this season. His average xA rate of 0.22 is again one of the highest among similar players. The winger’s technical ability along with a range of passing options enable him to unlock opposition defences. He makes 3.25 passes to the final third and 4.93 passes into the penalty box per match. He has created two big chances this season and averages 1.5 key passes per 90 minutes. Additionally, Neres receives an average of 36.43 passes from his teammates. 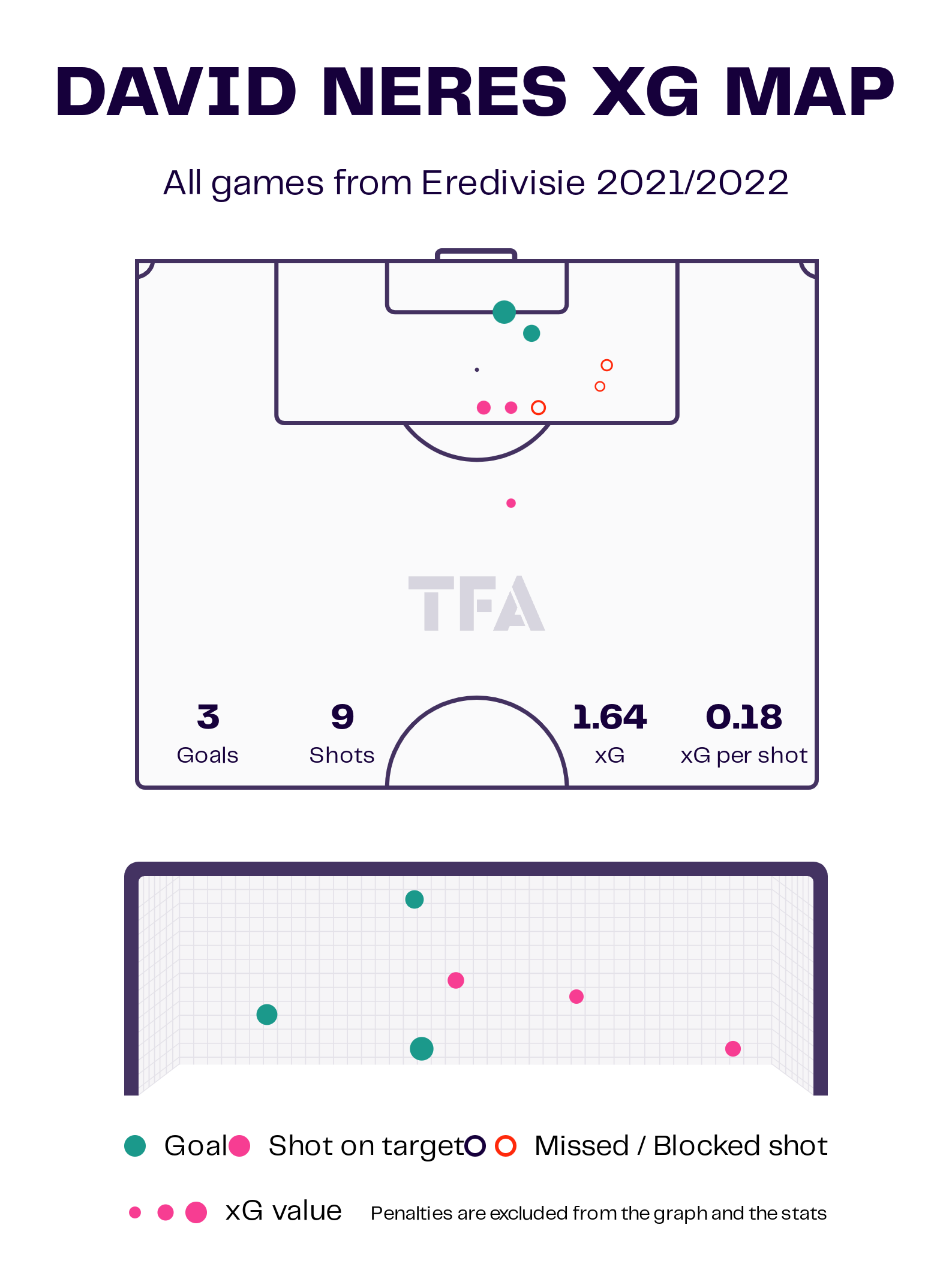 When compared to last season, David Neres only made 15 appearances in the Eredivisie, averaging 31 minutes per match. He had a total of three goals and two assists. Neres attempted only 9 shots, averaging 1.51 shots per game with a higher accuracy rate of 66.7%. He was scoring 0.5 goals per game with an average xG rate of 0.28. His attacking output has increased this season along with his playing time, and he has already registered more goal contributions than last year.

Neres with the ball 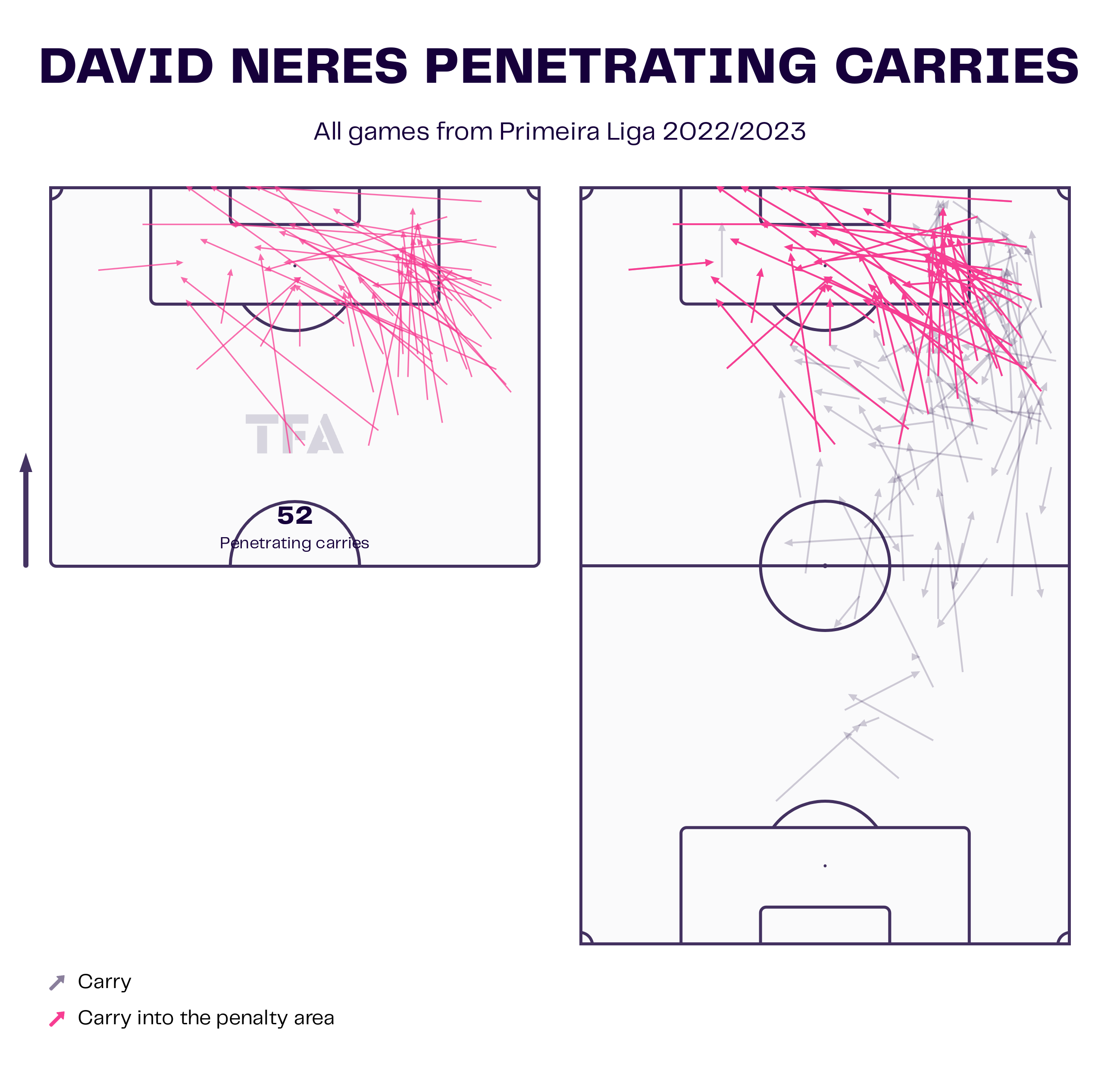 Dribbling is one of the main characteristics of the Brazilian winger. He penetrates the opponent’s defensive lines using his pace and skips past players and challenges with ease. The above viz shows the penetrating carries made by David Neres this season. He is proficient at driving the ball into the penalty box, with 52 such instances seen this season. 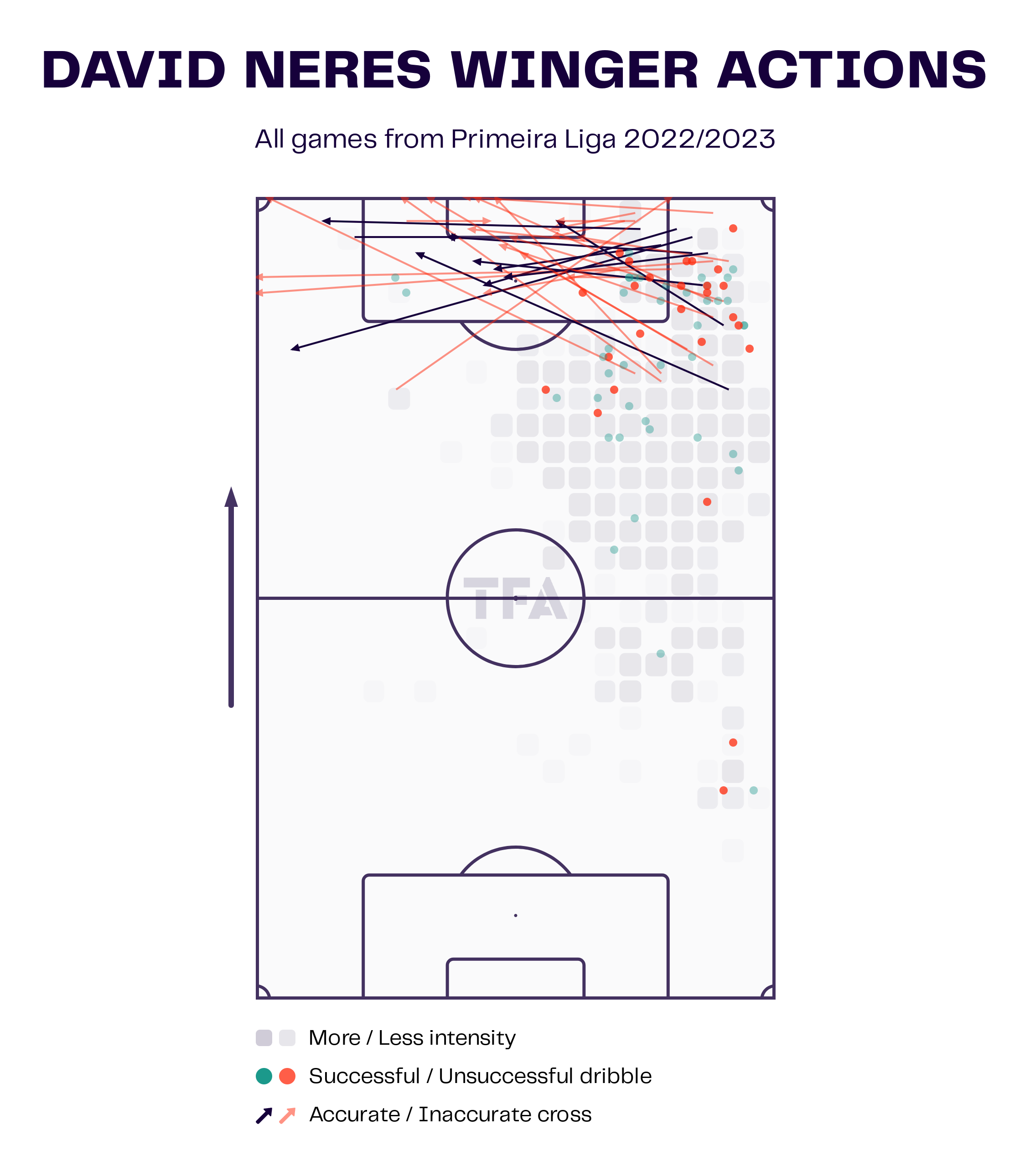 Neres moves around in the final third and often drifts wide to create chances. The above viz highlights his creative capabilities with the ball through winger actions. The 25-year-old likes to take on players and put crosses into dangerous areas. Currently, he attempts 7.51 dribbles with 61.2% accuracy and 4.15 crosses with 27% accuracy on average. Furthermore, Neres makes 3.59 progressive runs along with 3.47 touches in the opposition’s penalty area per game.

David Neres is back to playing football with Benfica more frequently and consistently. He is a constant threat to opposing defences with his ability to score goals as well as create chances for others. While he already has more goal contributions than last season, he will be keen to make these numbers as good as those during his early days at Ajax.