GD Chaves, who gained promotion to Liga Portugal after finishing third in the second division, are currently placed ninth this season. So far in Liga Portugal 2022/23, Chaves have won five, drawn four, and lost five matches. They have picked up 19 points at a reasonable rate of 1.36 points per game. Despite being a newly promoted team, Chaves have defeated the likes of Sporting CP and Sporting Braga this season. The team has shown relatively decent form in their league campaign so far and has two wins, two defeats, and a draw in its last five matches. They are having a good season in the top flight and don’t seem to be bothered by their status as underdogs. Below are some stats looking at Chaves’ overall performances in Liga Portugal 2022/23. 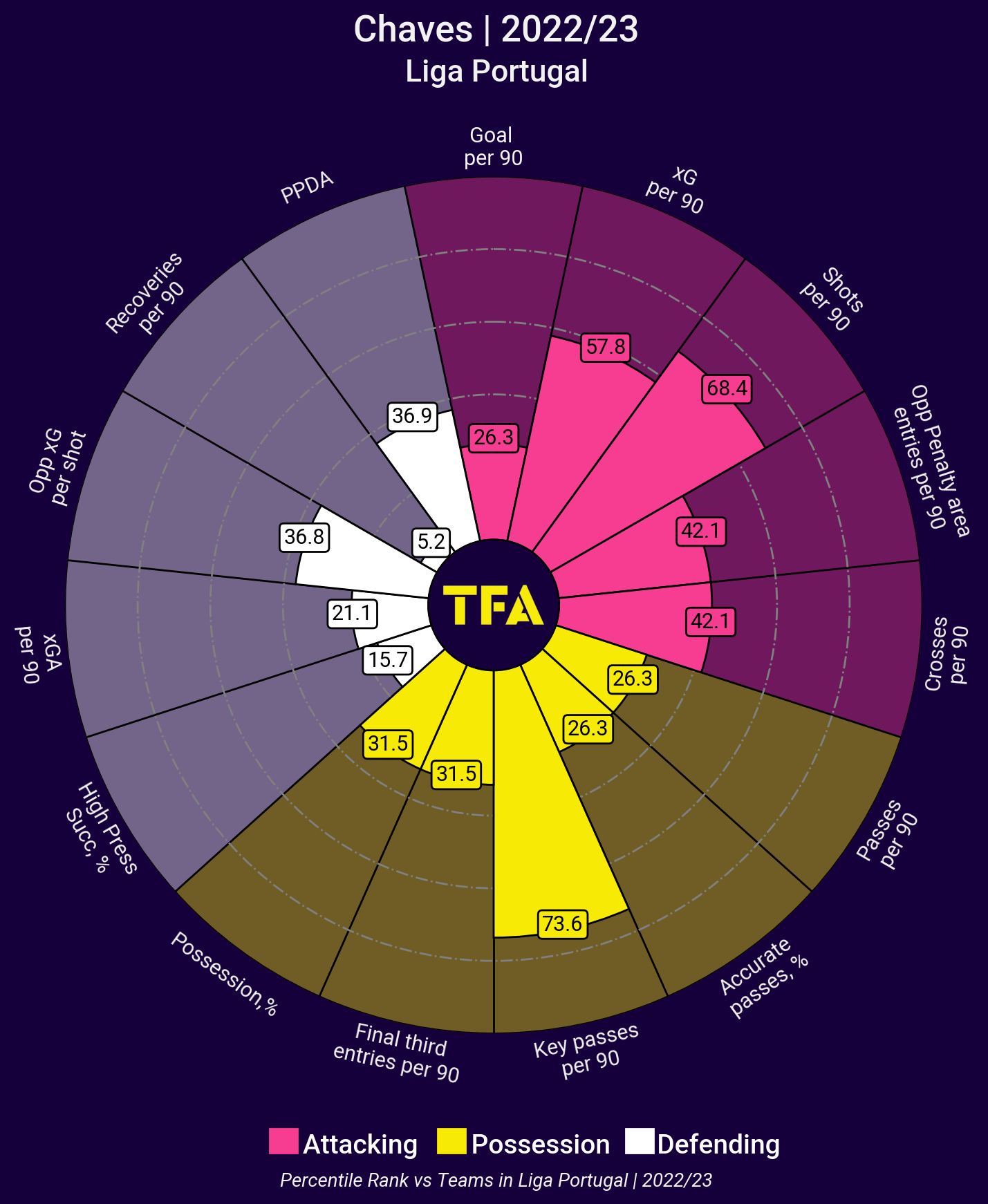 The viz above shows the percentile rank of Chaves’ stats compared to other teams in Liga Portugal. It can be observed that Chaves are faring adequately in the attacking and possession departments. They have a decent percentile rank in metrics such as shots, key passes, and xG. However, there is some room for improvement in areas like goals and accurate passes. Similarly, in the defence department, the team can do better in terms of recoveries and high-pressing success rate, where they possess a really low percentile rank. 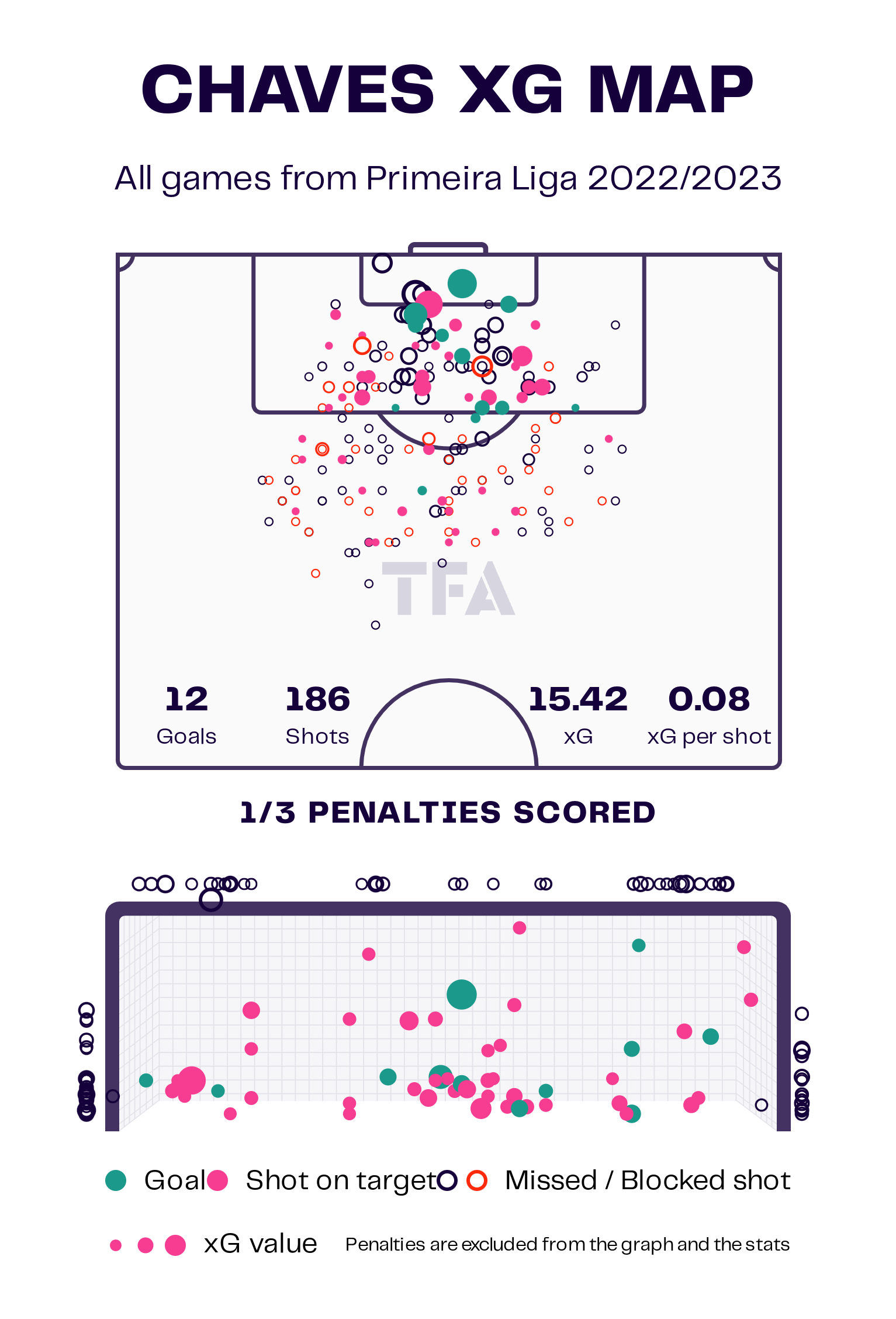 Chaves have scored 13 goals this season with an xG count of 15.42 (excluding one penalty). This is not the best outcome in proportion to the 186 shots taken. They are scoring 0.93 goals per match while averaging an xG rate per match of 1.27. The team averages 13.5 shots per match with an accuracy rate of 29.1%. The viz above shows the shot map of Chaves from Liga Portugal 2022/23. They shoot close range but also try their luck from a distance. All but one of their goals have come from inside the penalty box. Additionally, they have taken three penalties, converting only one of them. Goal conversion is an area where they will want to improve. 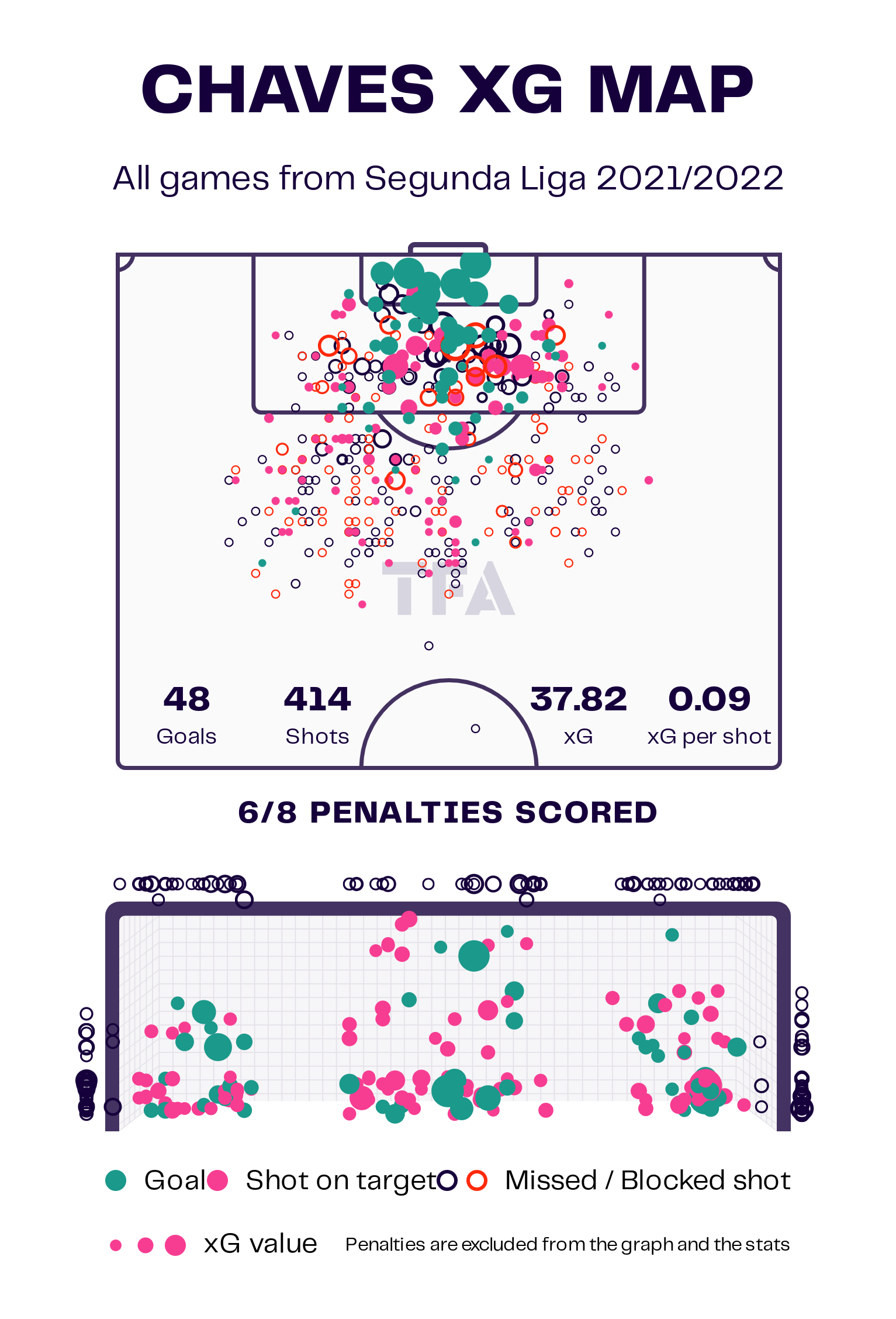 In comparison to the 2021/22 season, Chaves scored 54 goals with an xG per match value of 1.29. They scored at a rate of 1.59 goals per match and took 12.41 shots per match, with an accuracy rate of 36.7%. There is no doubt regarding the difference in standards between the top division and the second division, and the team has done satisfactorily in terms of scoring goals this season. Despite facing tougher competition, Chaves generates similar quality goalscoring chances, as evidenced by the similarity in their xG values, but fails to convert them as frequently. 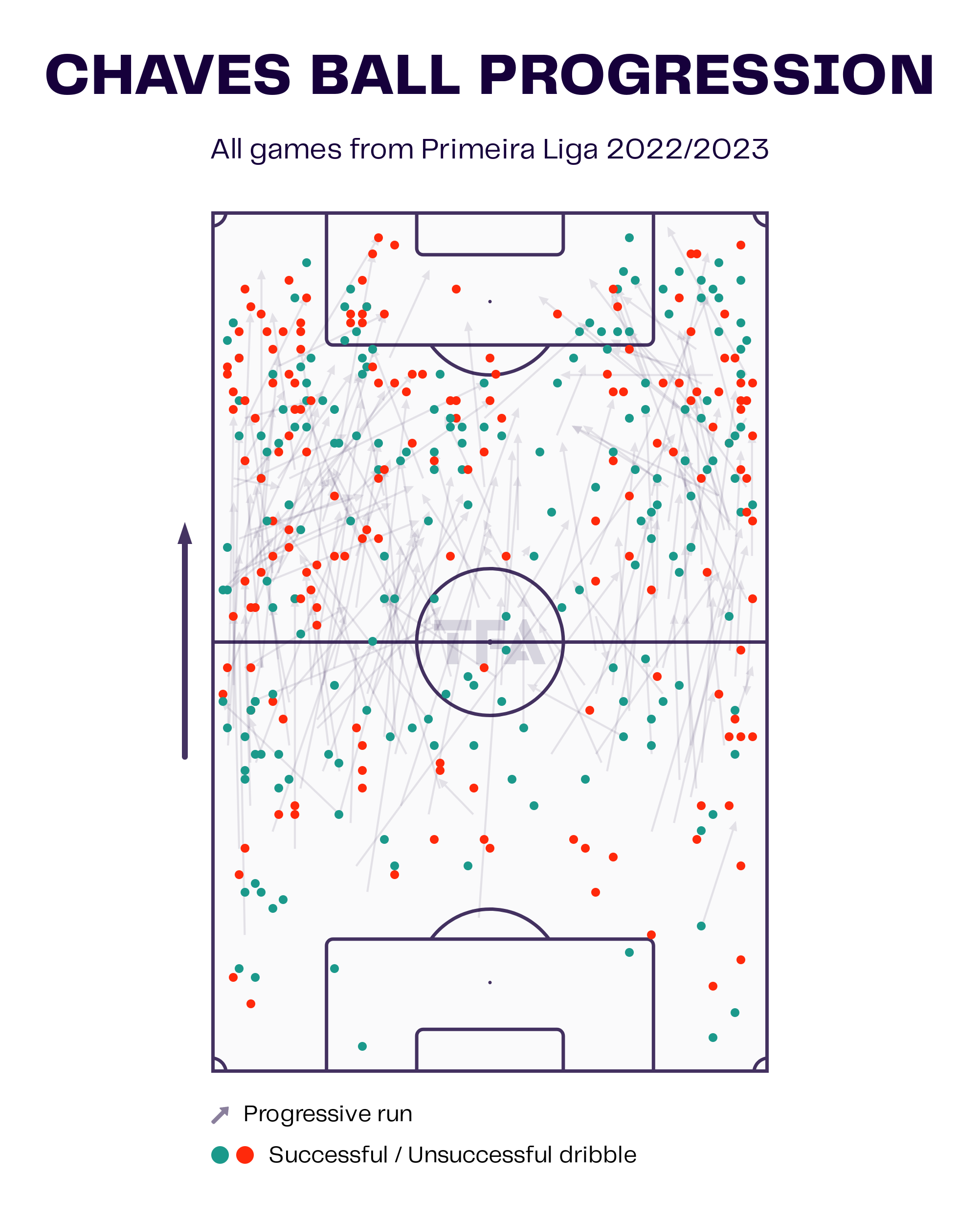 The above viz represents the overall ball progression by Chaves in Liga Portugal 2022/23. We can observe the team’s significant utilisation of the two flanks to progress up the pitch. They can also be seen using the central zones to move forward, but not as frequently. Chaves creates 24.79 positional attacks per match, with 31.1% of such attacks resulting in shots. On the other hand, they launch 2.21 counterattacks per match, with 56.3% of them ending with a shot. They are more efficient with their counterattacks compared to their positional play. 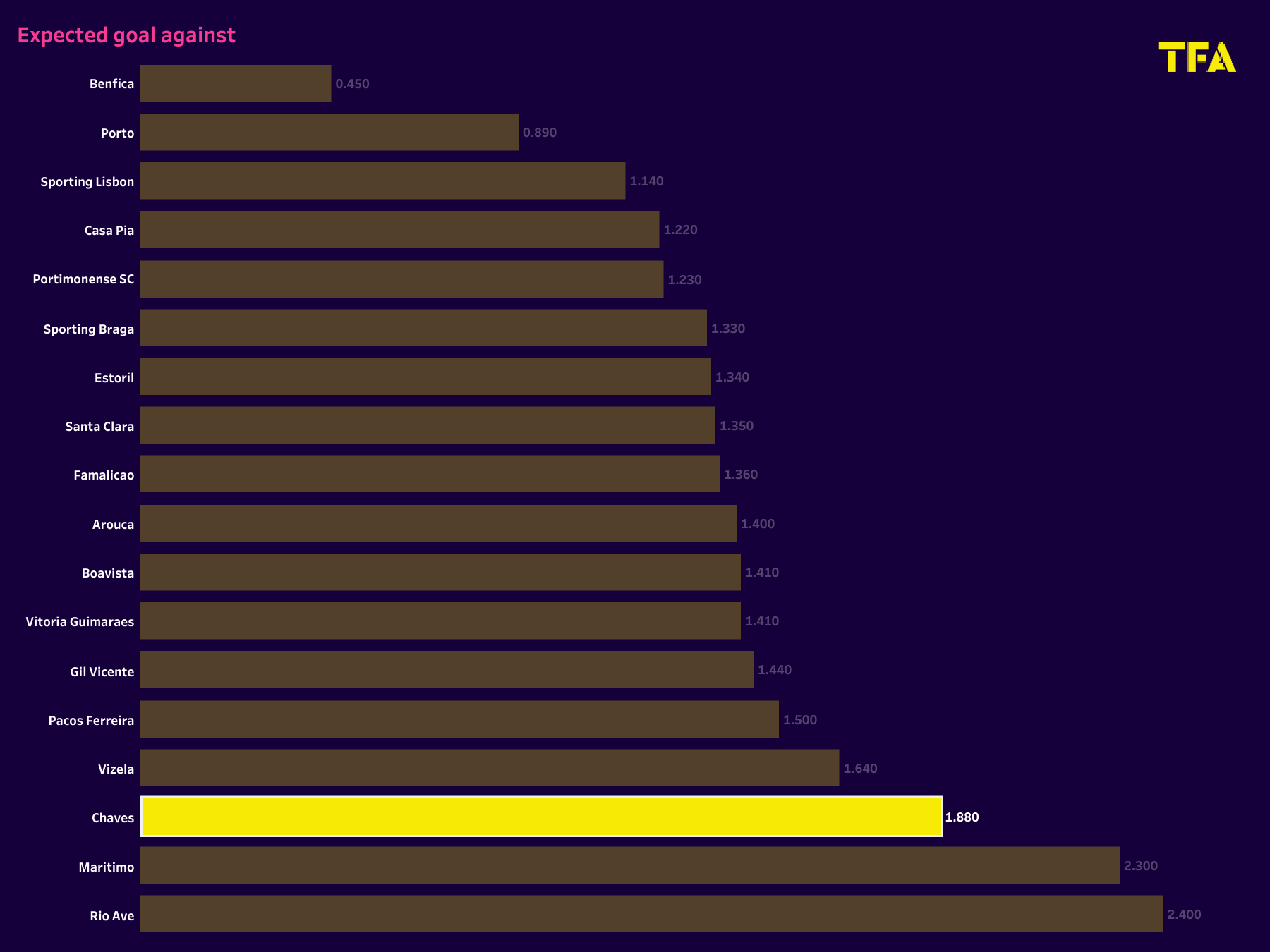 Chaves’ defensive statistics are slightly better than their attacking numbers. So far, they’ve given up 18 goals and have a goal difference of -5. These numbers are better than a lot of the Liga Portugal teams this season. With 1.29 goals conceded per match on average, they are letting in goals at a much lower rate than their current xGA per match value of 1.75. However, they will be keen to reduce the average number of goals they concede.

Compared with last season, Chaves conceded 35 goals throughout their Liga Portugal 2 campaign with a positive goal difference of 19. They let in 1.03 goals per match on average, with an xGA rate of 1.1. While the team is facing tougher competition in the top division, they will want to bring their current defensive stats closer to the figures from last year. 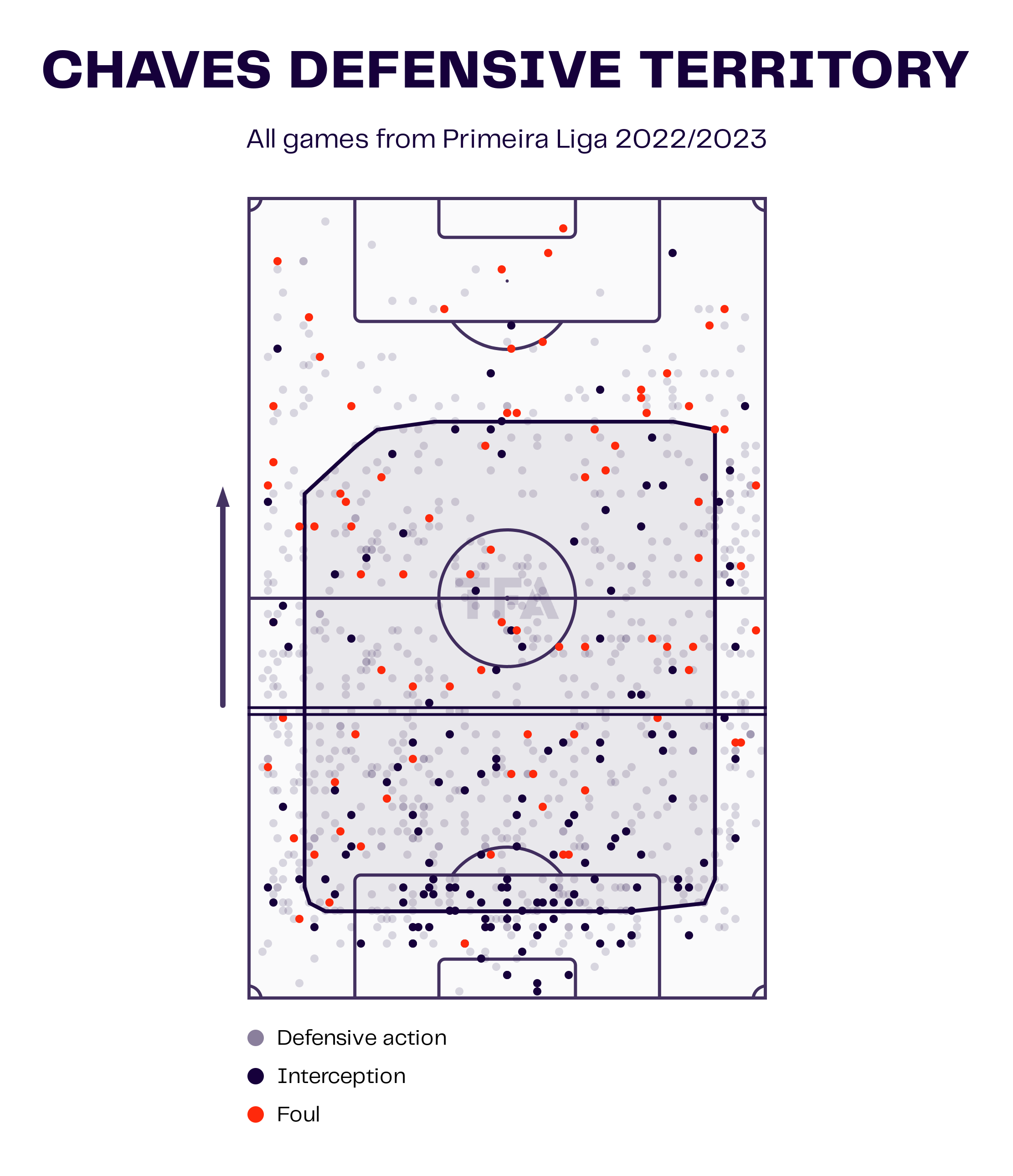 The viz above illustrates Chaves’ defensive territory in Liga Portugal 2022/23. It can be observed that the team’s average defensive line is well within their half. They commit a good amount of their defensive actions in the defensive third and even inside their penalty box. Chaves makes 78.5 recoveries along with 45.07 interceptions per match, and he gives up 12.21 fouls on average. Additionally, the team wins 53.2% of their defensive duels and 52.2% of their aerial duels per match. 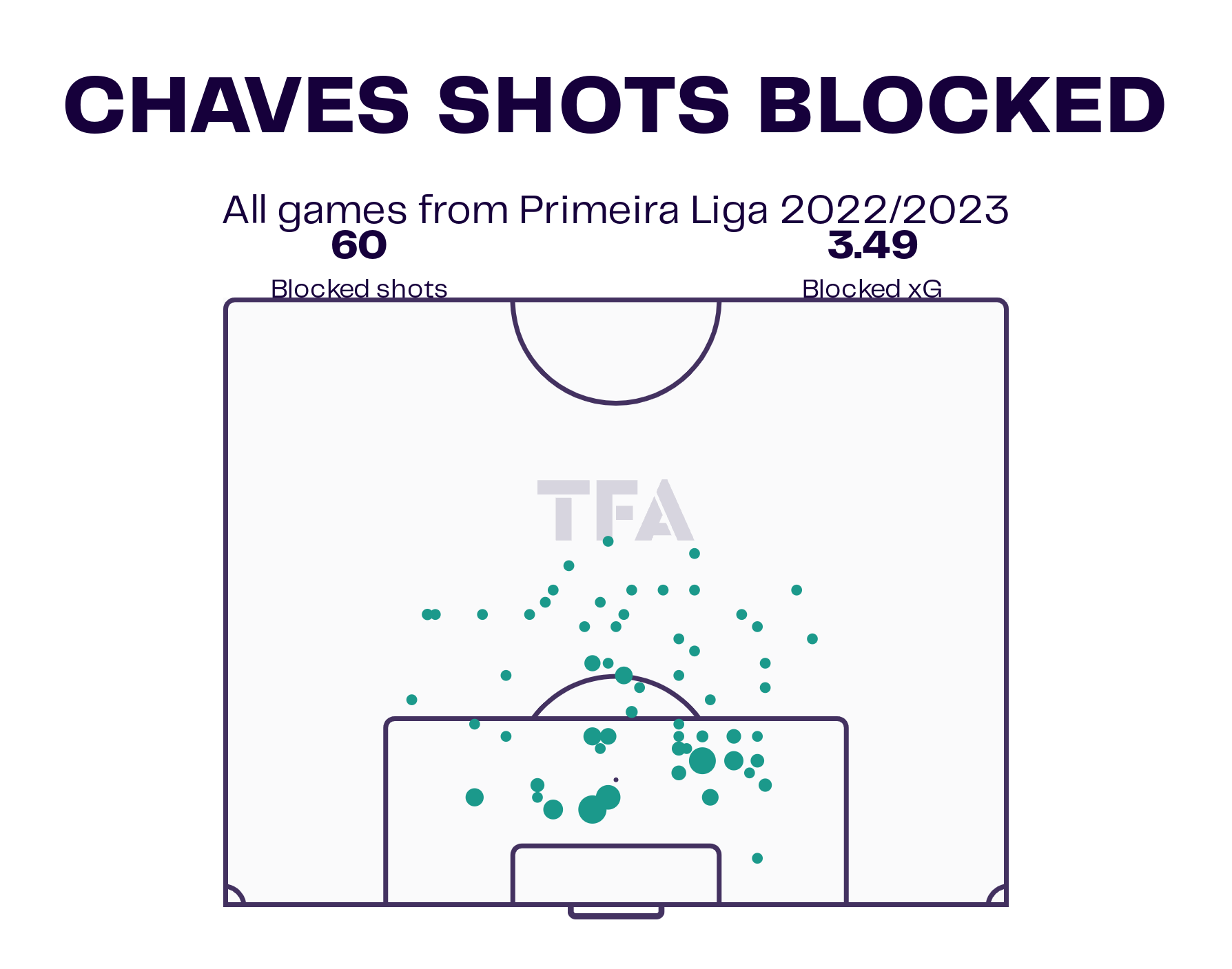 Chaves’ defenders have displayed their determination to make scoring goals tough for the opposition. They have blocked an impressive amount of 60 shots between them, with a total xG of 3.49 on those shots. A good proportion of these blocks were made inside their penalty box and have been essential. This shows the commitment and willingness of the players to work hard and help the team get positive results.

Chaves will be keen to continue their momentum in the upcoming fixtures. After giving some impressive performances against the better teams, they will be aiming to finish in the top half and make it a successful season. Moving forward, Chaves will look to sharpen their gameplay in attack and impart more steadiness to their defence.