With the winter transfer window in full flow, many European clubs are looking to bolster their squads in key areas. Among them are Benfica, who seem interested in bringing 22-year-old Casper Tengstedt to Liga Portugal. The Danish youth international currently plays for the Norwegian Eliteserien club Rosenborg and is regarded as a promising young player. In the 2022 season, he made 14 appearances in the Norwegian top division and netted 15 goals. As a result, he finished joint third in the scoring charts and helped his team achieve a third-place finish in the process. Tengstedt has usually featured as a centre-forward for Rosenborg, but he can also assume the role of a winger on either flank. Below we look at some stats to understand why Casper Tengstedt has drawn serious interest from Liga Portugal powerhouse Benfica. 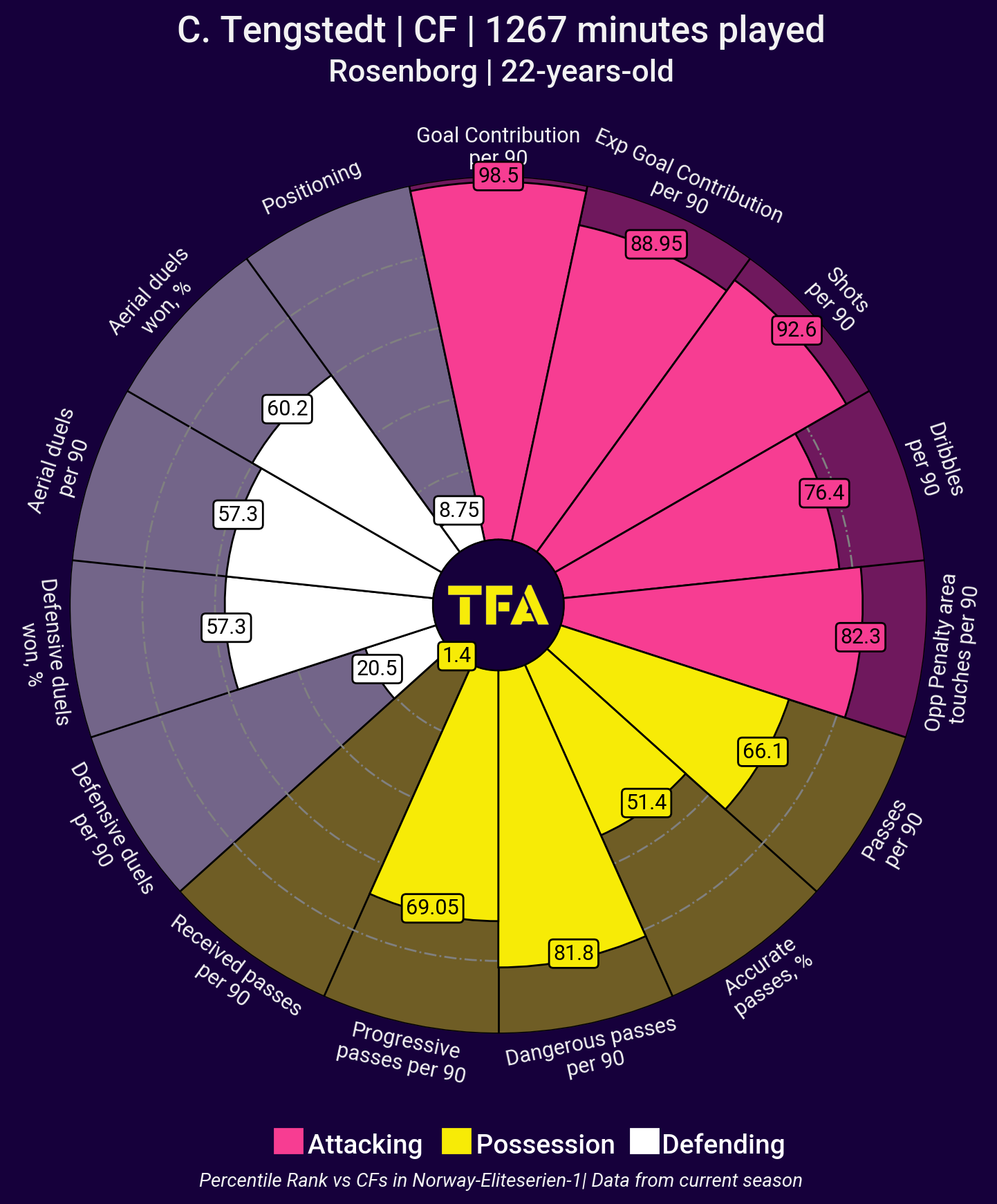 Casper Tengstedt joined Rosenborg in the middle of the 2022 Norway Eliteserien season after scoring 14 goals and finishing as the top scorer in the Danish second division while helping his former club gain promotion to the Danish Superliga. Thus far, the 22-year-old forward has made 14 league appearances for Rosenborg, averaging 86 minutes per game and starting in all.

The above viz shows the percentile rank of the player’s stats in comparison to the other players featured as centre-forwards in the Eliteserien. We can observe that Tengstedt dominates the attacking records with a high rank in all parameters, particularly goal contribution per 90 and shots per 90. Meanwhile, his possession records highlight his capacity to find a range of passes. He also seems to do decently in terms of winning defensive duels and aerial duels.

Casper Tengstedt in the box 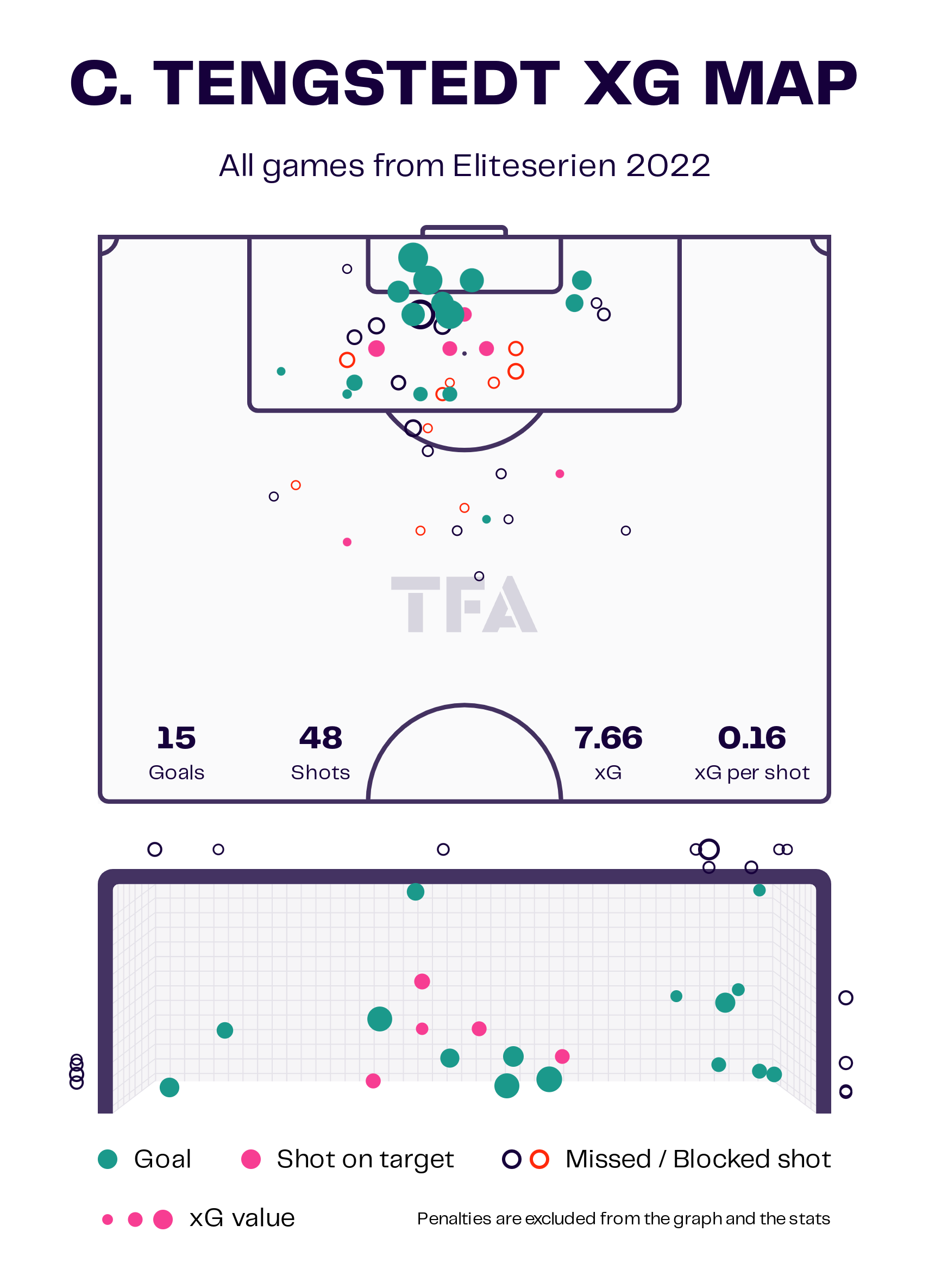 The above viz depicts the shot map of Casper Tengstedt from the 2022 season of the Norwegian Eliteserien. He reached the back of the net 15 times with an xG value of 7.66. The forward scored at a rate of more than one goal per match while averaging an xG rate of 0.54. He attempted 48 shots, with most of them coming from inside the penalty area in proper centre-forward fashion. Nine of his goals have come in the vicinity of the six-yard box, and one has come from a long-range effort. The 22-year-old attacker took an average of 3.41 shots per game with an accuracy of 43.8%. 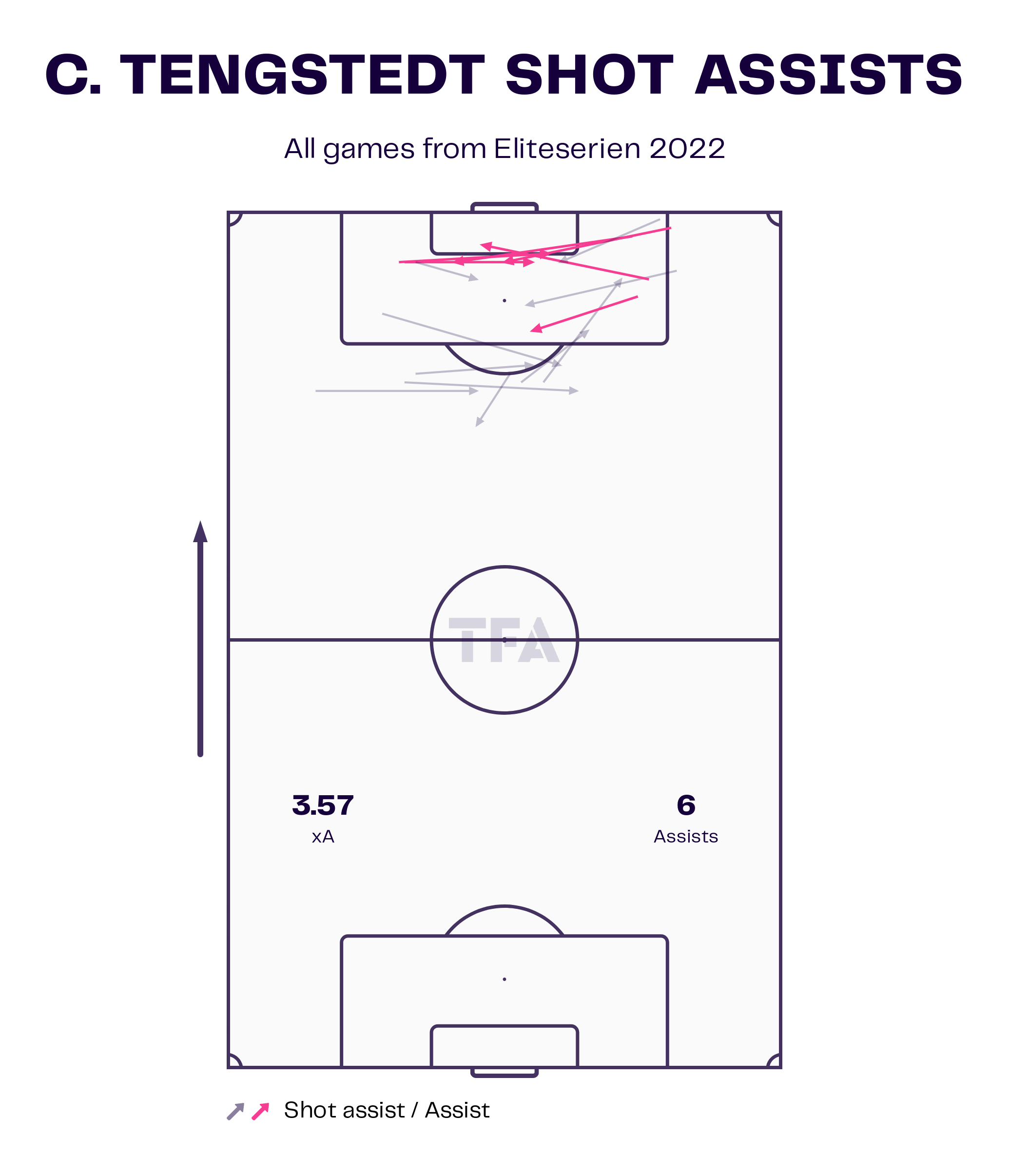 In addition to being a natural goal scorer, Casper Tengstedt has shown the key quality of producing goal-scoring opportunities for others. He provided six assists for his Rosenborg teammates last year, with a total xA tally of 3.57. He averaged 0.43 assists per match, a higher rate than his per-match xA value of 0.25. The Danish youth internationals attempted 18.04 passes per match with 78.3% accuracy. He created seven big chances while averaging 1.2 key passes and 1.14 shot assists per match.

Tengstedt with the ball While Casper Tengstedt’s prime role is to operate in the penalty box for goal-scoring opportunities, he also drops into midfield to link up play. The above viz shows the player’s heat map from Eliteserien 2022. It can be observed that Tengstedt has displayed more intensity in certain areas of the pitch, particularly through the centre in the final third and in the wider positions of the middle third. He averages nearly five touches per match in the opposition’s penalty area and makes 2.06 progressive runs per game. Additionally, the forward makes 2.06 passes to the final third and 1.28 passes into the penalty box per match. 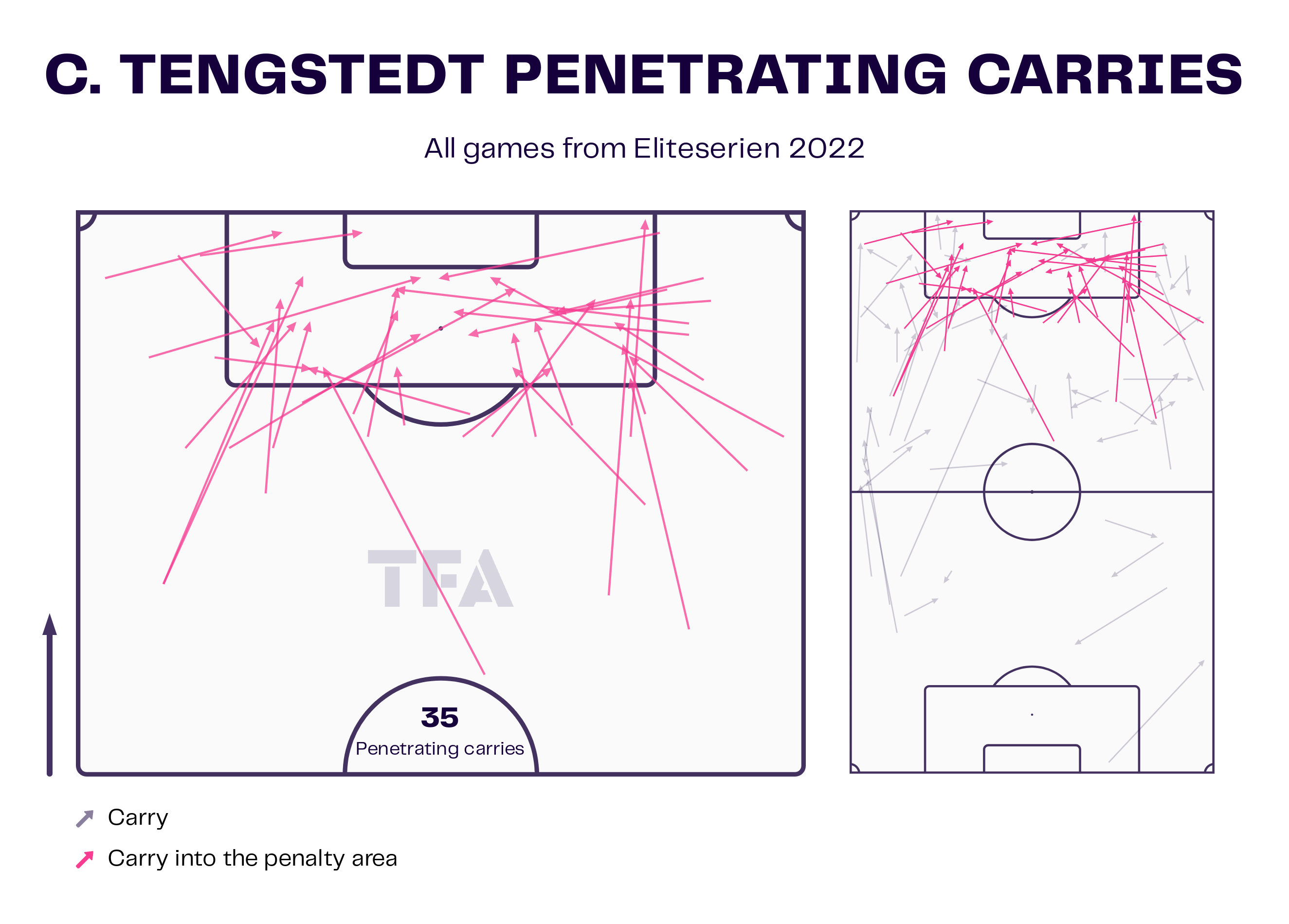 Casper Tengstedt acts as a mobile forward in the advanced attacking areas. He possesses the ability to move the ball into dangerous positions by performing attacking actions deep in the final third. He often occupies spaces in wide areas and tries to dribble, cross, or pass the ball into the penalty area. As a Rosenborg player, he made 35 penetrating carries into the penalty box in the Norwegian top flight. The forward attempts 4.33 dribbles per match with 37.7% accuracy and delivers 1.35 crosses with 42.1% accuracy. He creates scoring chances for himself and his teammates by performing winger actions.

What could be Tengstedt’s role at Benfica? 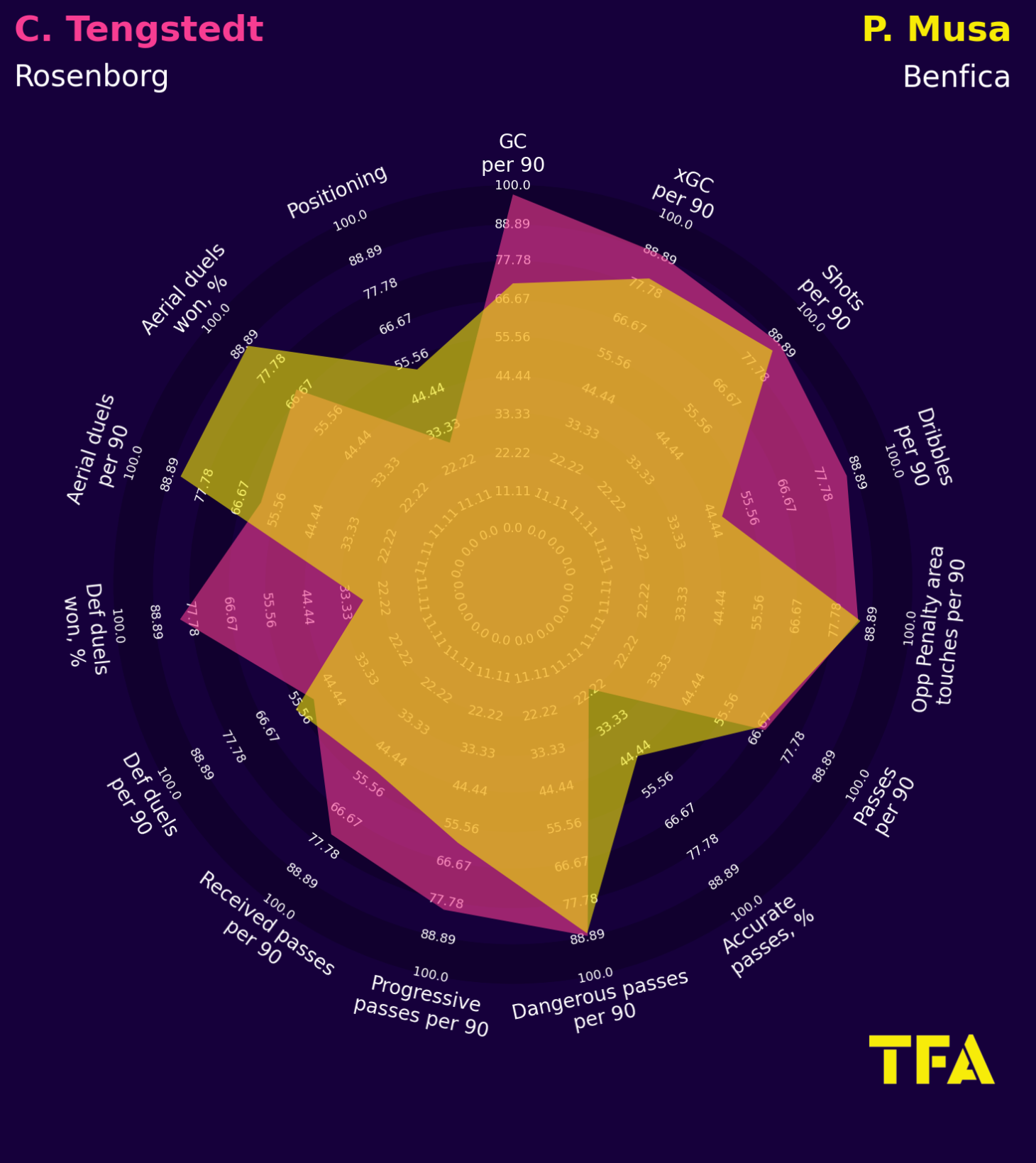 The viz above compares the performances of Casper Tengstedt and Petar Musa, who play as centre forwards for Benfica. It can be observed that the Danish attacker has the upper hand in some stats over his counterpart, namely goal contributions, dribbles, shots received, progressive passes, and defensive duels. If Benfica decides to move for Tengstedt, he would bestow the team’s attacking line with his fine goal-scoring talent as well as add reinforcements to it. Furthermore, the youngster will have the opportunity to develop into his true potential at a decorated club like Benfica.

Casper Tengstedt can certainly move to Liga Portugal for the next step in his promising career. He is a young forward capable of scoring goals as well as operating in versatile roles across the front line. For now, it remains to be seen if Benfica make the move to enlist the services of this talented Danish player.