Casa Pia currently sits in fifth place in Liga Portugal 2022/23, having taken 27 points from 15 matches. They are in an excellent spot currently after gaining promotion last year and are looking to go one step further next season by qualifying for their first-ever European competition.

This season in Liga Portugal, Casa Pia’s form is good overall, with eight wins, three draws, and four losses. As a result of this performance, they are currently ranked fifth out of 18 teams in Liga Portugal after winning 53% of their matches. If they manage to hold on, they will ensure participation in a continental tournament next season.

Casa Pia’s home record is average with three wins, two draws, and three losses. And their away form is considered excellent because of five wins, a draw, and a loss each. Casa Pia has scored 15 goals and conceded just 11 in the Portuguese top division this season. Below are some stats depicting Casa Pia’s Liga Portugal season of 2022/23. 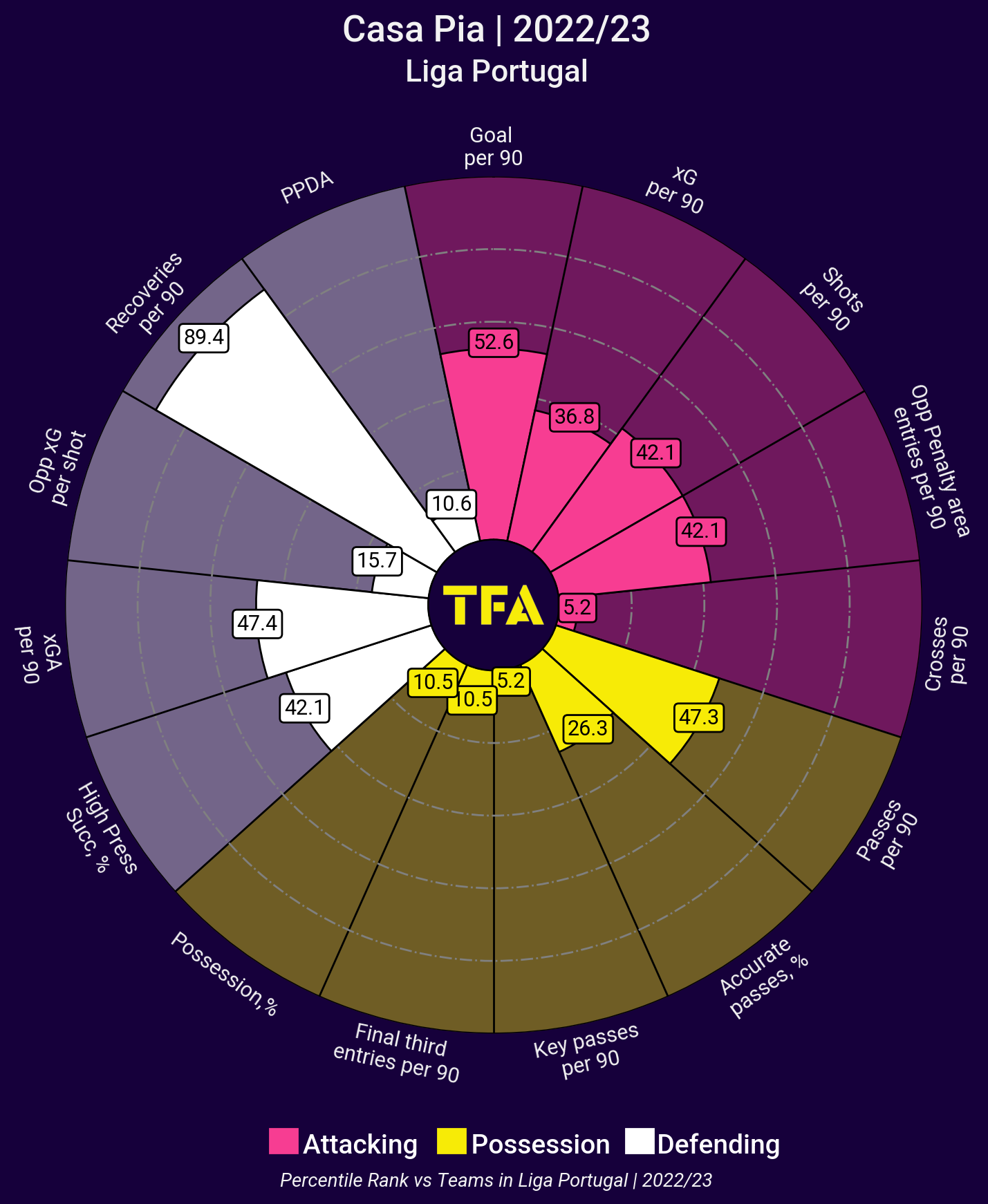 The above viz shows the percentile rank of the team in attacking, defensive, and possession stats compared to other teams in Liga Portugal. It can be observed that Casa Pia’s prime strength is in defence. They are immensely successful at making recoveries and have conceded the second-lowest number of goals, keeping eight clean sheets. Meanwhile, they are performing decently in attack in terms of goals and shot attempts, but there is room for further improvement. The possession department shows a similar status, with the team doing reasonably well in terms of finding passes but needing to improve their stats for key passes and final third entries.

Casa Pia have scored 15 goals with a total xG value of 15.07 (excluding penalties). They are scoring at the rate of one goal per match while averaging 1.11 xG per match. The viz above shows the team’s shot map from this season. It can be seen that Casa Pia have taken most of their goal attempts from inside the penalty box. They’ve also had a number of shots from outside the box, the majority of which have either missed the target or been blocked, with the exception of one that resulted in a goal.

On average, Casa Pia attempts 9.25 shots with 35% accuracy in their home matches this season. As for their away games, they take 10.86 shots per match with 33% accuracy. Furthermore, the team creates 23.13 positional attacks in home matches compared to 18.29 positional attacks in away matches. Additionally, they launch 2.71 counterattacks when playing away and 2.0 counterattacks when playing at home. 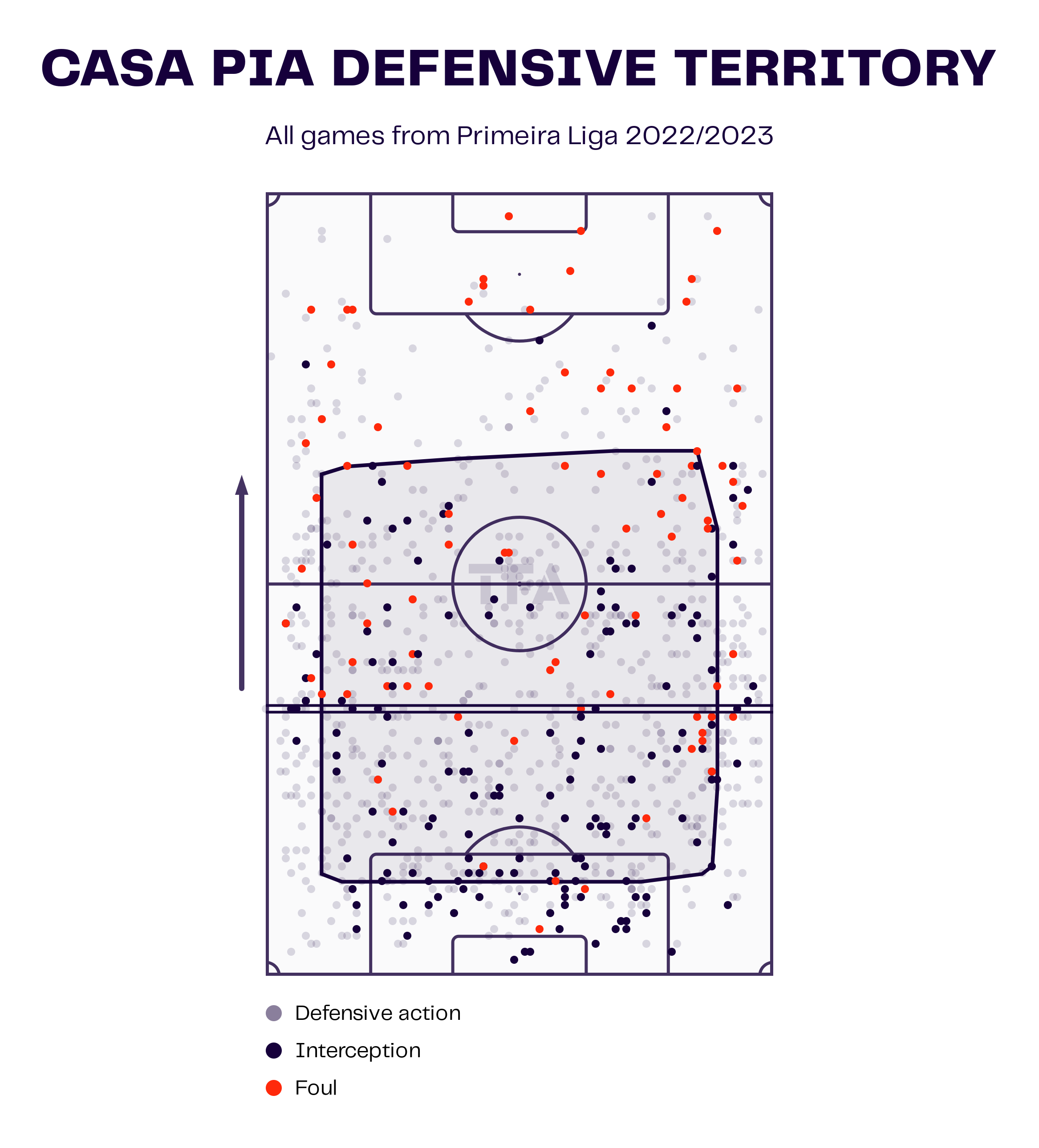 Casa Pia’s defence has been incredibly strong this season, having conceded only 11 goals thus far. They concede 0.73 goals per match despite averaging an xGA rate of 1.40. The above viz shows the defensive territory of the team from the current Liga Portugal season. It indicates that Casa Pia are involved in a lot of defensive actions in the defensive and middle thirds.

Best away performance in defence 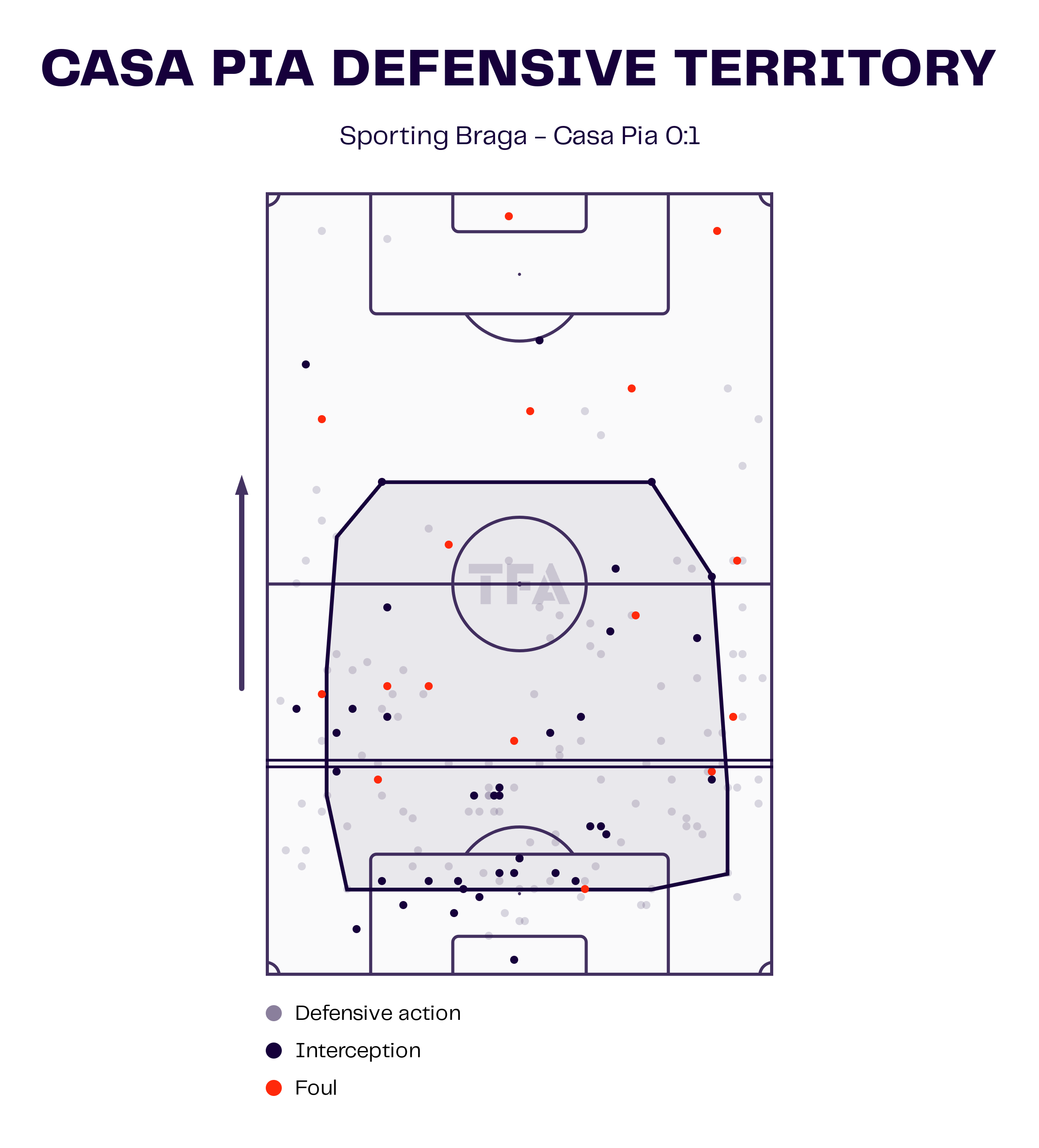 The above visualisation depicts Casa Pia’s defensive territory during their away match against Sporting Braga in Liga Portugal. Casa Pia won the match one goal to nil against such eminent opposition. The visitors made as many as 67 interceptions in the 90 minutes played and had a success rate of 50.8% for defensive duels. They also made several crucial interceptions inside the box but conceded one foul, leading to a penalty for Braga, which was saved by Ricardo Baptista. Casa Pia players also made 41 clearances in the match and won 34.3% of the aerial duels.

Their most recent away performance in defence 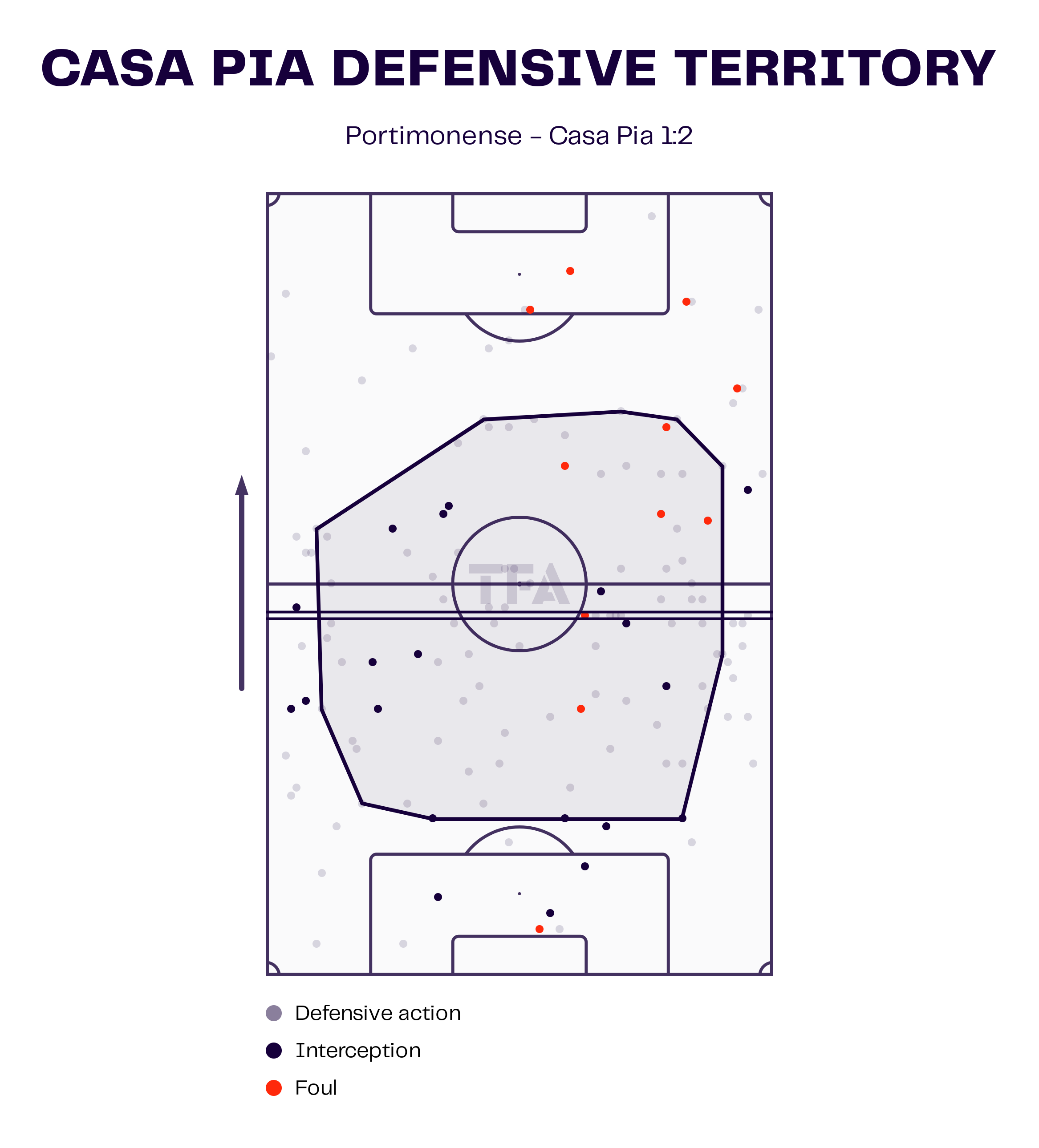 In their most recent away fixture, Casa Pia visited Portimonense and won the match two goals to one. The team made 40 interceptions in the 90 minutes played and had a success rate of 56.1% for defensive duels. They gave up yet another foul in the box, and this time it cost them a goal. In terms of aerial duels, they won 32% of those attempted and made only six clearances. Casa Pia have overall registered great defensive numbers away from home. They have continued with their impressive away record since the start of the season, with four wins and one defeat in their last five fixtures on the road.

Overall, Casa Pia are delivering strong performances this season after arriving from the second division. They went into the campaign as the ultimate underdogs and have defied expectations after a promising start. Casa Pia’s impressive form has raised hopes of achieving a European qualification spot. While it will be a tough race for the club, they will be expecting to stay in it till the very end.