The Argentine Liga Profesional has a reputation for nurturing young talent and moving them onward to the prominent European leagues. The player in focus is Carlos Alcaraz, who is drawing the attention of a host of European clubs, including FC Porto from Liga Portugal. The 20-year-old central midfielder currently plays for Racing Club in the Argentine premier division.

Alcaraz joined the youth academy of Racing in 2017 and went on to make his professional debut for the club in January 2020. His first major contribution came in the 2022 Argentine Super Cup final when he scored an extra-time winner in a 2-1 victory against Boca Juniors. We will now look at some of the stats to understand why this young talent is attracting the attention of top clubs. 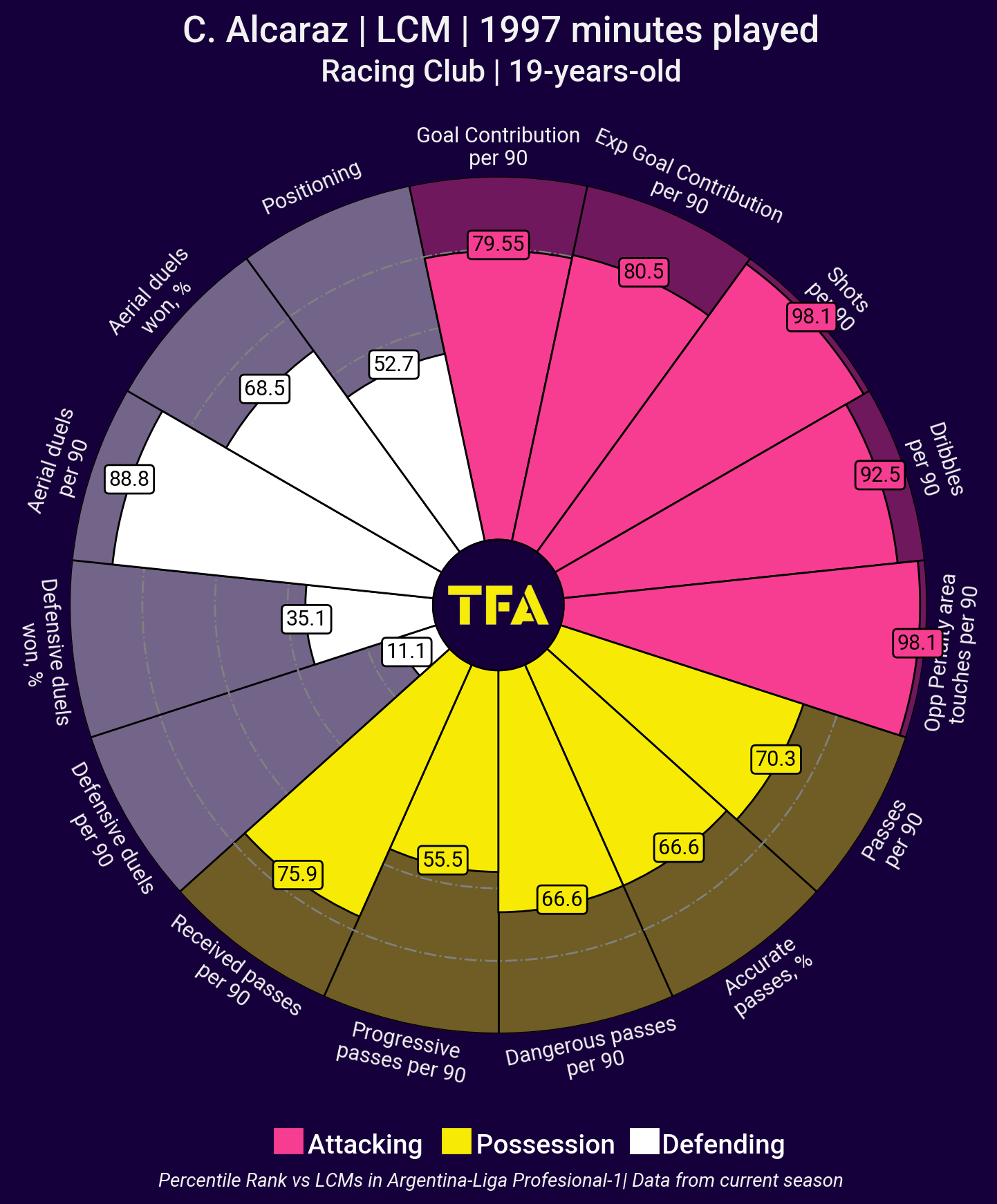 Carlos Alcaraz has started featuring more regularly on the Racing side over the past two seasons. A right-footed player, he usually features on the left side of the central midfield. In 2022, he made 31 appearances in the domestic league and the top-level Argentine Cup competition. Alcaraz has seven goals and an assist to his name across both competitions. The above viz shows the stats of the player in comparison to the other players featured as left-centre midfielders. We can observe the young talent dominating the attacking statistics, particularly in areas like shots, dribbles, and touches in the opposition penalty box. The 20-year-old has plenty of time on his side to enhance his passing and defensive attributes, but his ability to win aerial battles stands out.

A midfield talent with attacking intent 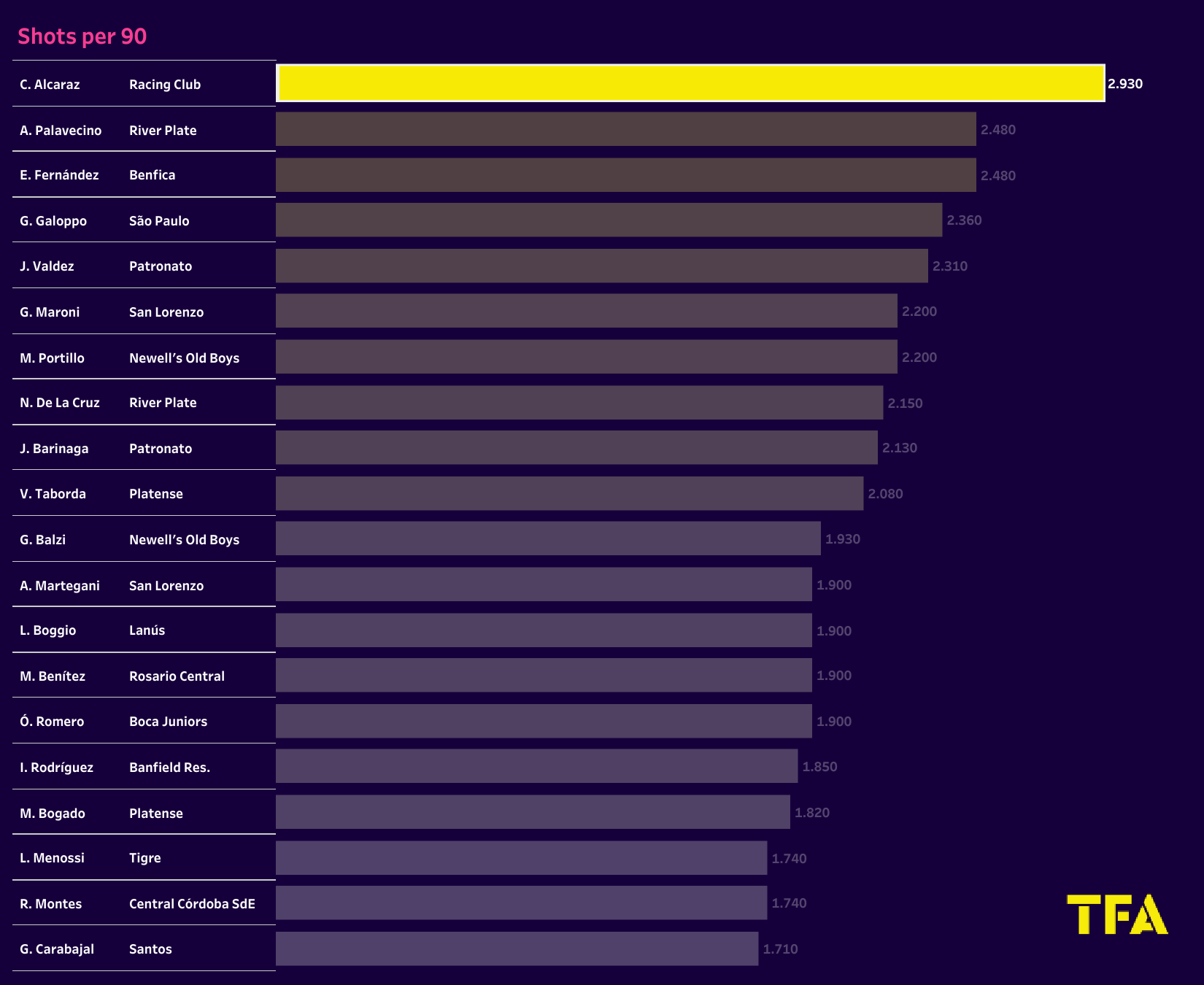 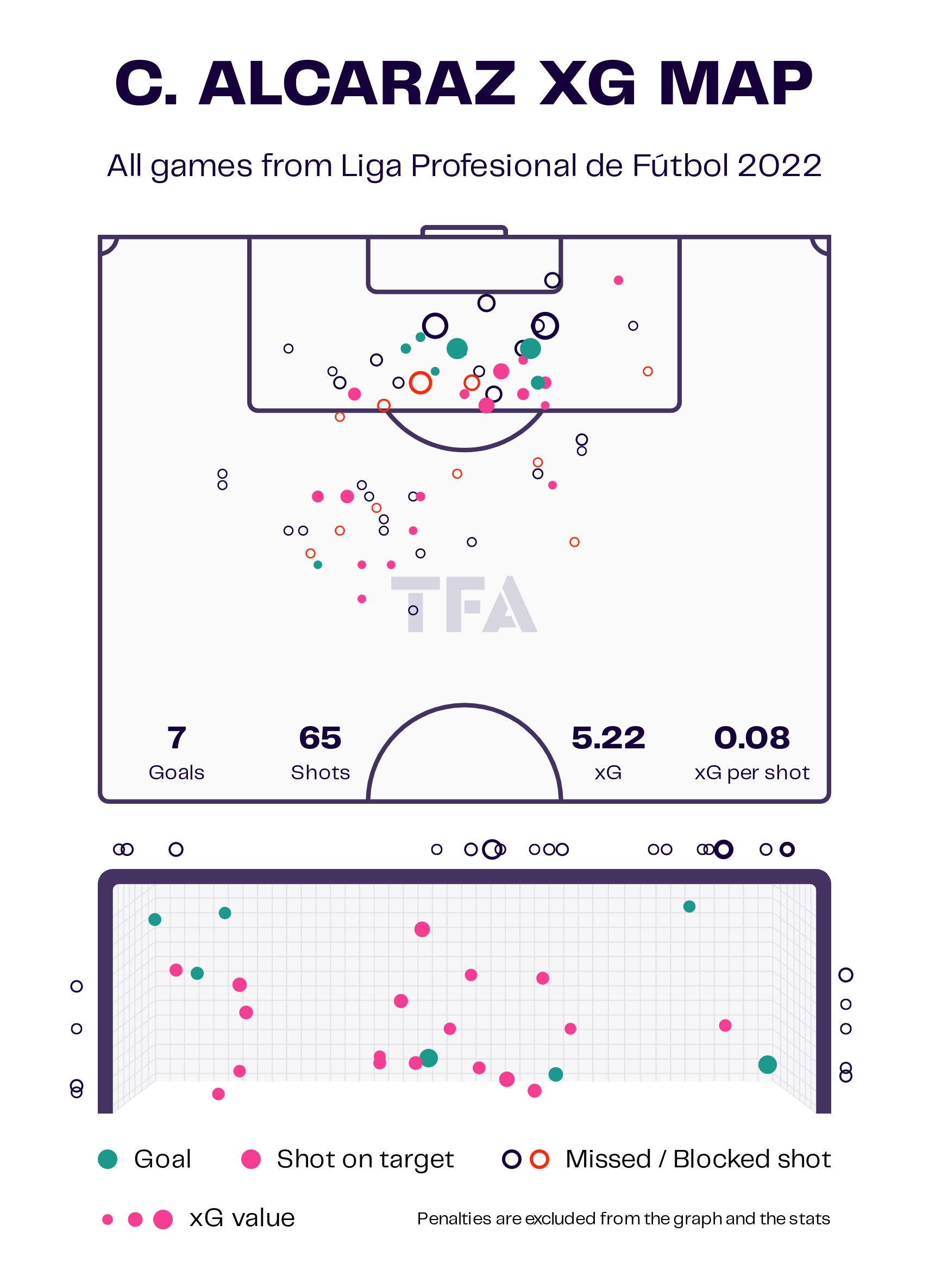 The young Argentine has added seven goals for his team, which exceeds his xG of 5.22. The visuals above show his shot map and relevant rankings of similar players based on shots per match. Alcaraz is undisputedly on top in terms of shots taken. This season, he took 3.63 shots per 90 minutes, with 34.1% of them on target. The player attempts most shots from the left side of midfield and also from dangerous areas in the penalty box. While most of his goals come from inside the penalty box, he also has the ability to shoot and score from long range. 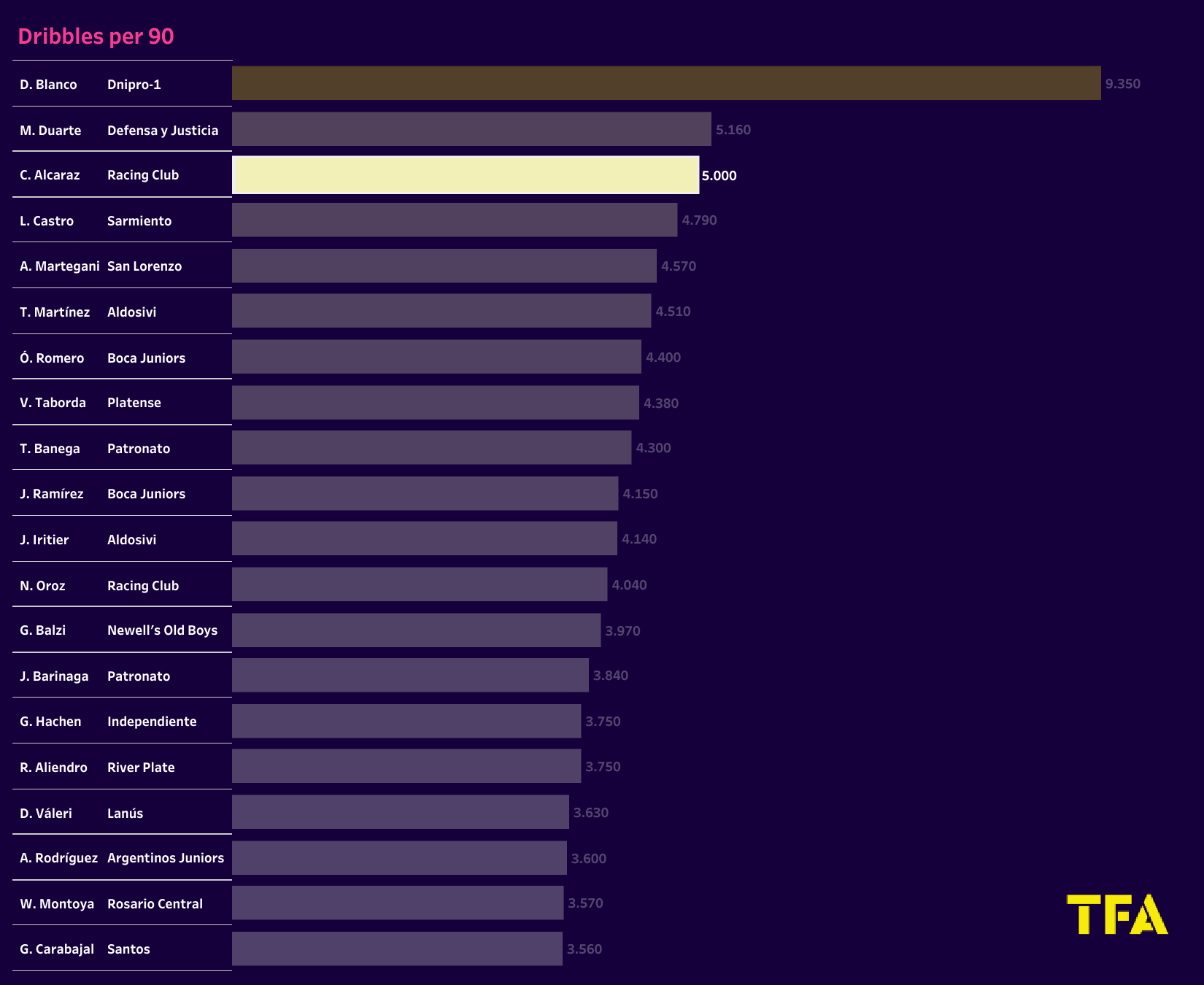 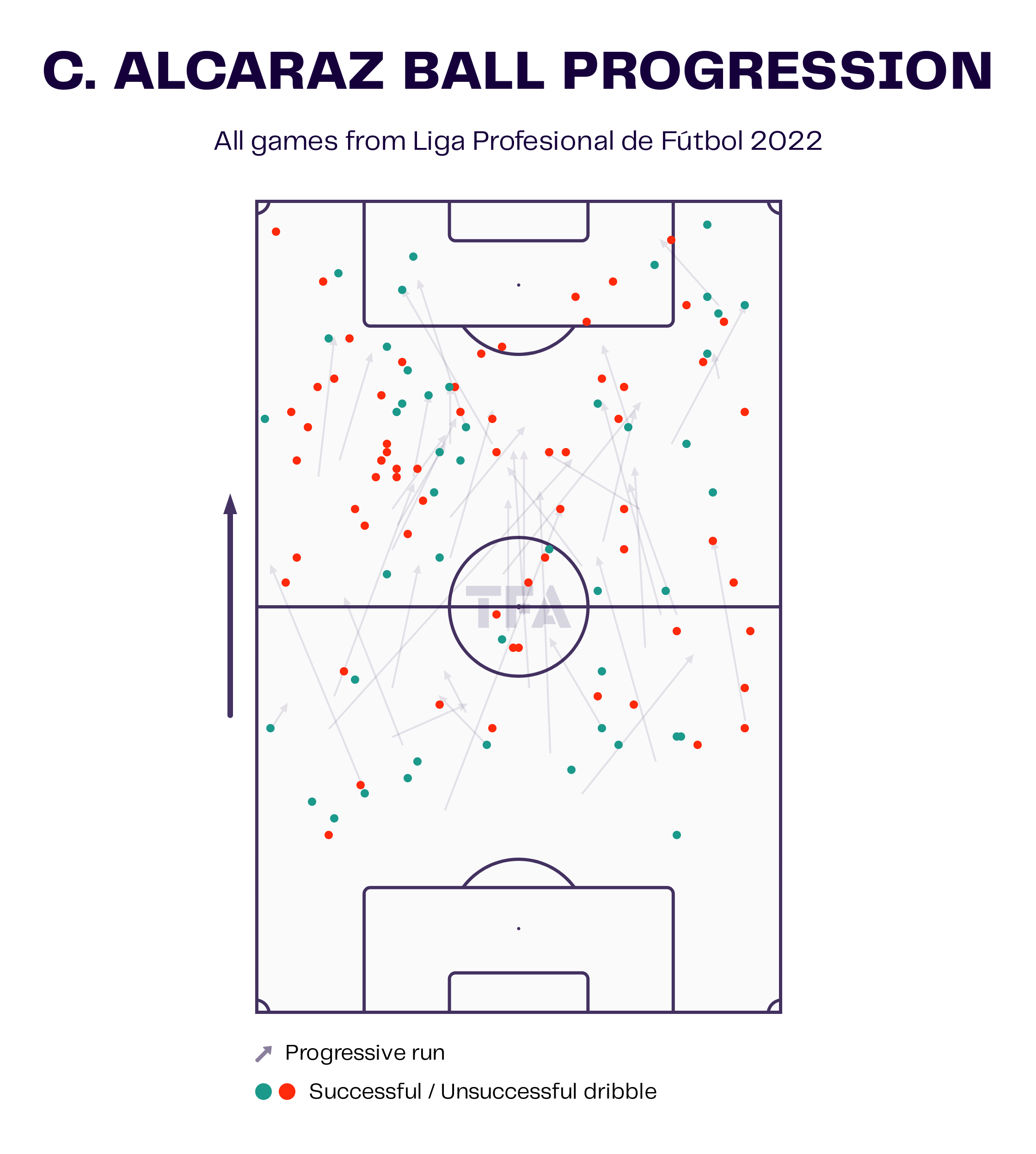 Alcaraz also seems confident about taking on opponents. The benchmarking above shows that the player is ranked third in terms of dribbles attempted among similar players in the league. He currently attempts 5.0 dribbles per 90 minutes. Meanwhile, the other visual above shows the type of progressive runs and dribbles he executes. It is a good illustration of how he moves the ball forward without including passes. Most of his successful dribbles are on the left side of the attacking third, while his movement suggests he prefers progressing inward and centrally to occupy the spaces in the opponent’s midfield. 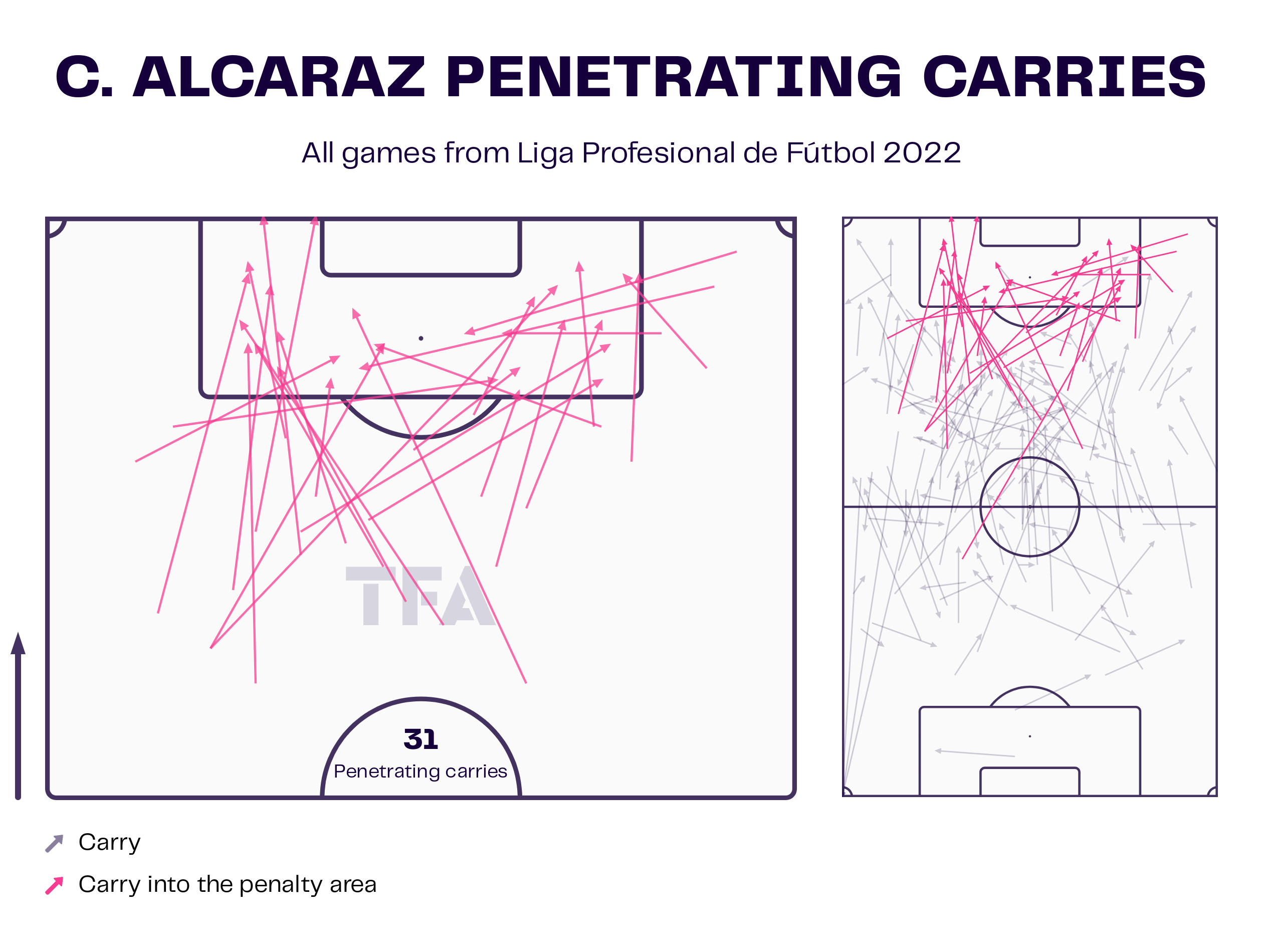 When it comes to carrying the ball, Alcaraz again has the affinity to penetrate inward into central positions in the attacking third. This could highlight his ability to attack the spaces in and between the lines of opposition players. He can also carry the ball into the penalty area to stretch the opposition defenders, with 31 such instances seen above. At times, he will also carry the ball into wide positions on either side to set up his teammates. 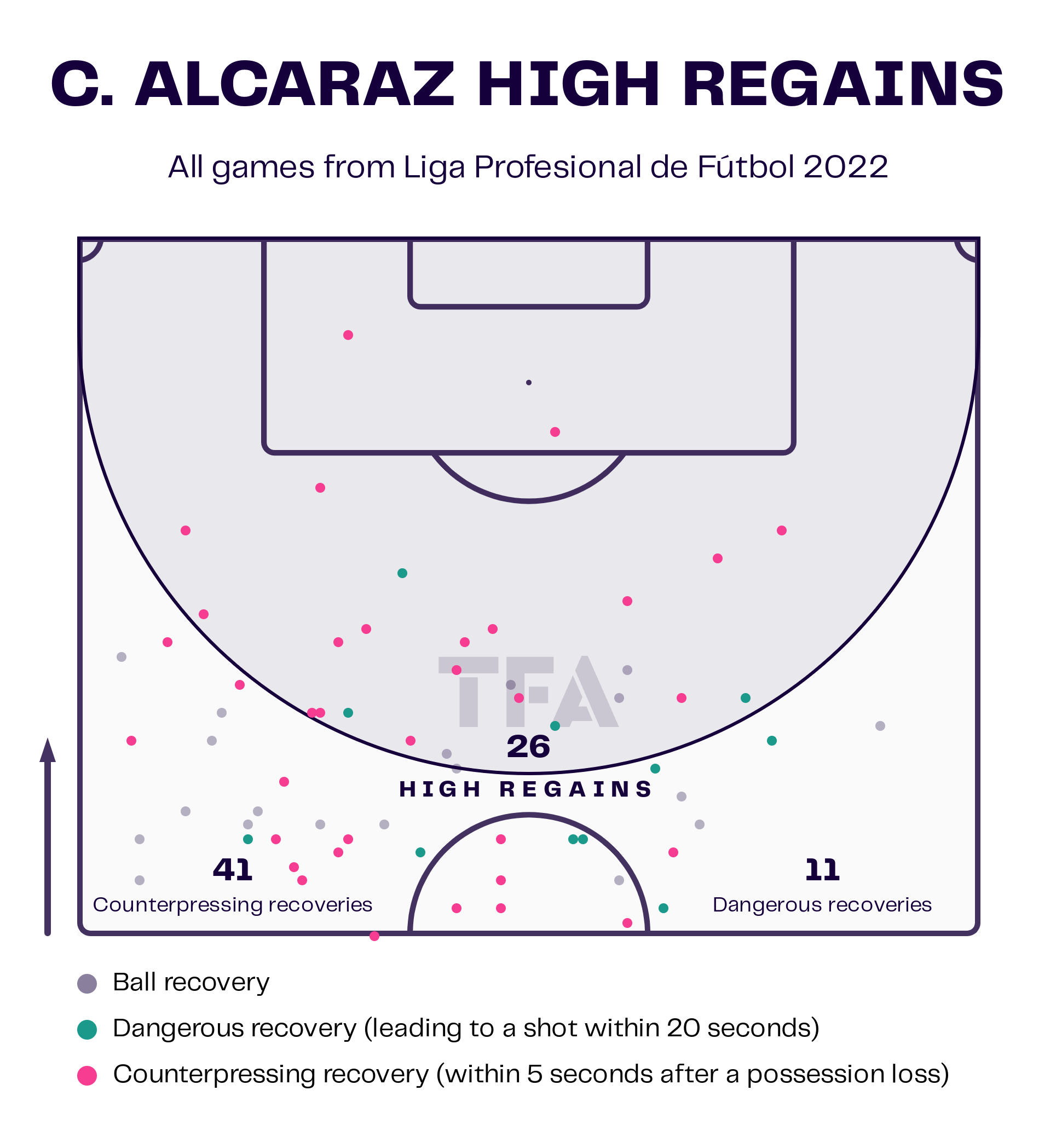 Another interesting attribute of the Argentine talent is his ability to recover possession in the opposition’s half. Alcaraz has made 26 high regains and 11 dangerous recoveries, the majority of them in the midfield regions. He seems well capable of tussling in the central areas and the final third to win back possession for his team.

Who could Carlos Alcaraz replace at FC Porto? 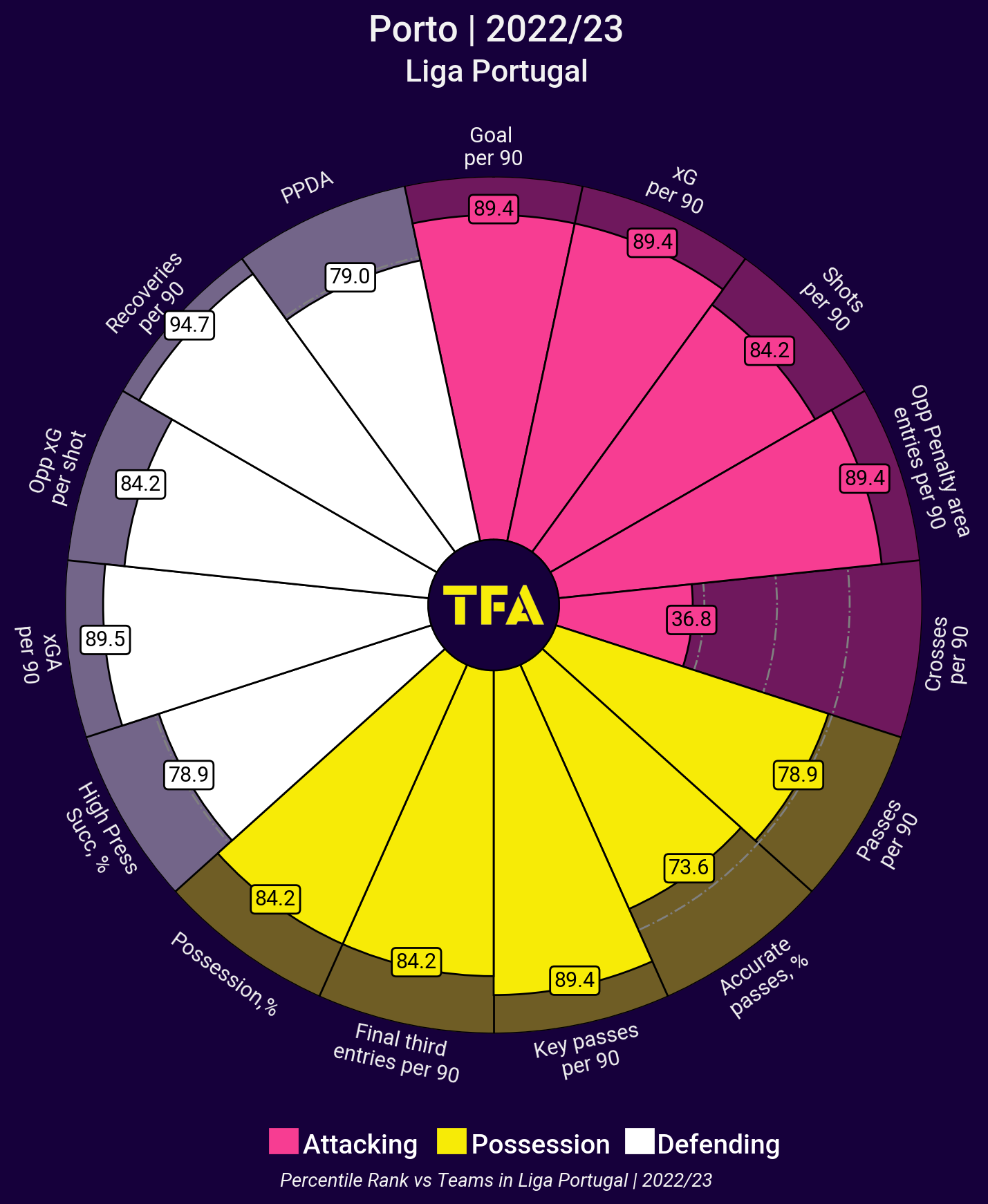 FC Porto currently sits in the second spot in the Liga Portugal table. They have scored 31 goals in 13 games and conceded nine. As one of the most decorated clubs in their country, they will undoubtedly look to put pressure on rivals Benfica in their quest for consecutive league titles. The club also saw the departure of midfielders Vitinha and Fabio Vieira in the summer transfer window. Therefore, they might be looking to add more depth and talent to strengthen their squad. 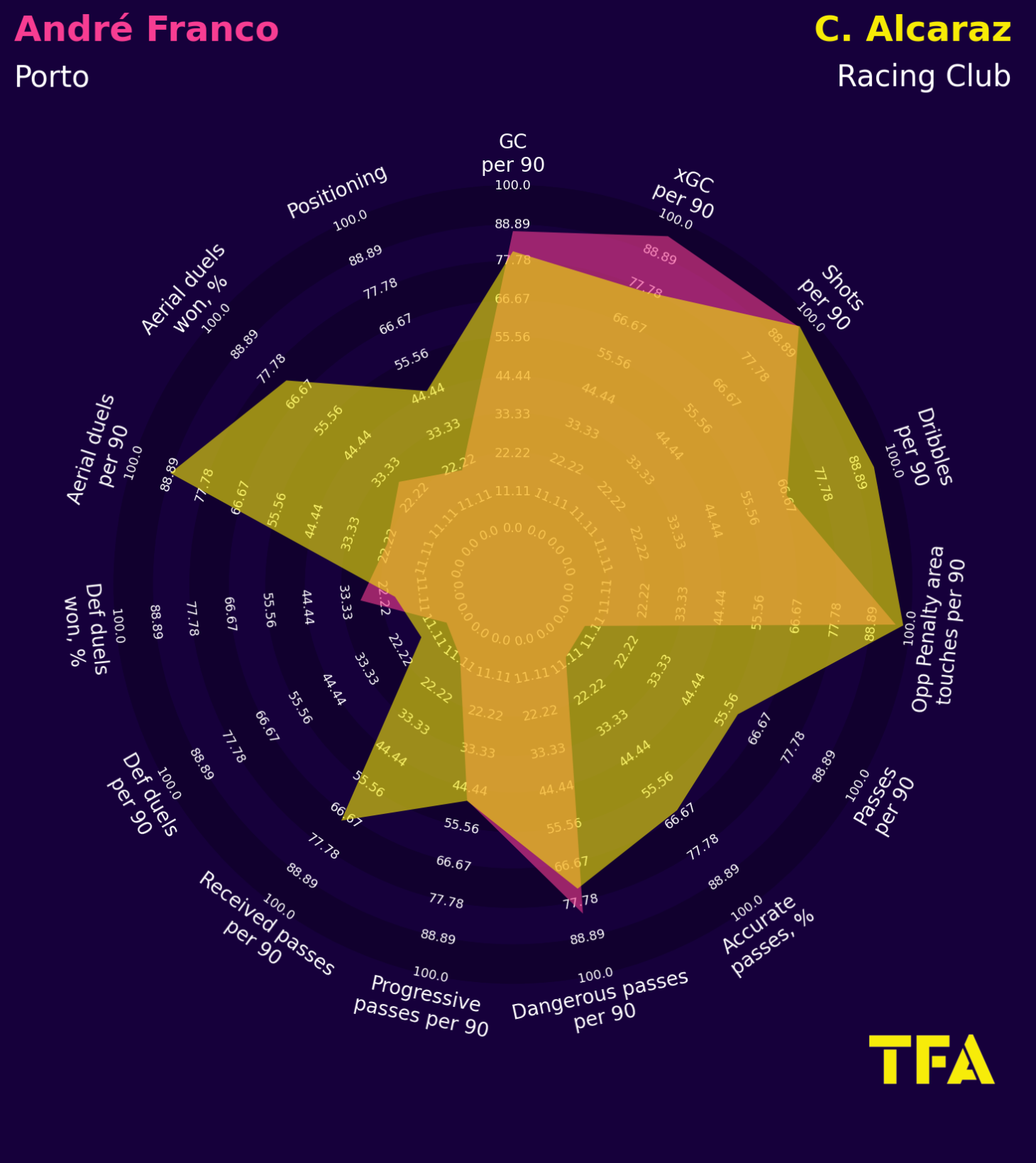 A player Carlos Alcaraz could gradually replace or provide cover for at FC Porto is attacking midfielder Andre Franco. The 24-year-old was brought in from G.D. Estoril Praia this summer to replace the outgoing midfielders in the squad. The viz above compares the performance of the two players in their respective leagues. It can be observed that Alcaraz has superior stats to his counterpart in most parameters. Most notably, the stats suggest Alcaraz’s better abilities at aerial duels, passing, and dribbling. Even though European football is different, the young Argentine has plenty of years ahead of him to reach his true potential.

In conclusion, Alcaraz is a physically strong and dynamic midfielder, standing at 1.83 metres tall. He displays attacking intent, possesses sound dribbling ability, and has a good understanding of different phases of the game. FC Porto has a reputation for developing young talent into future stars sought after by the top clubs, and Alcaraz could become one of them if the club moves for him.