Boavista is not having their best season in Liga Portugal this season. Thus far, the team has won five, drawn two, and lost six matches. This performance currently places Boavista in the 11th position out of 18 teams in Liga Portugal, six points above the relegation zone. Os Axadrezados enjoyed a good start to their league campaign with five wins, including a home victory against Sporting CP, and two losses. However, their form has faded, with the team winless in their last six matches with four defeats.

Boavista have scored a total of 14 goals this season and conceded a total of 23 goals. They are in for a difficult second half of Liga Portugal based on their recent struggles and might slip further below the standings if they don’t improve their performances. Below are some stats looking at Boavista’s current season in the Portuguese top division. 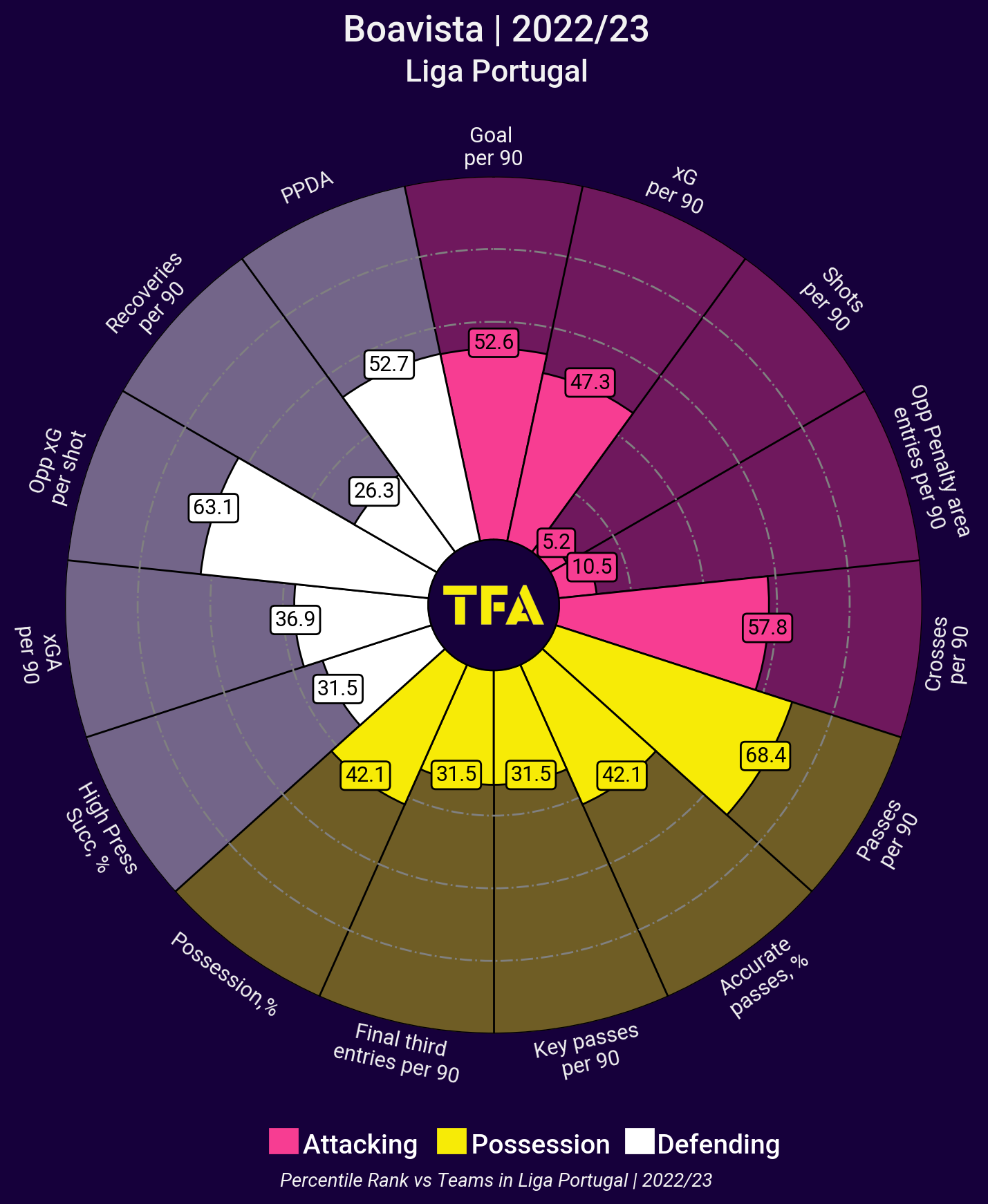 The viz above shows the percentile rank of the team’s stats in comparison to other teams in the league. We can observe that Boavista has overall underwhelming stats in all three departments. In the attacking department, they have above-average stats under indicators like goals and crosses per match but are really poor in terms of shots and opposition penalty area touches. In the possession department, they are below average in all indicators except for passes per match. Meanwhile, they don’t have much to show either in defence with their poor ranking in recoveries, high pressing success rate, and expected goals against. 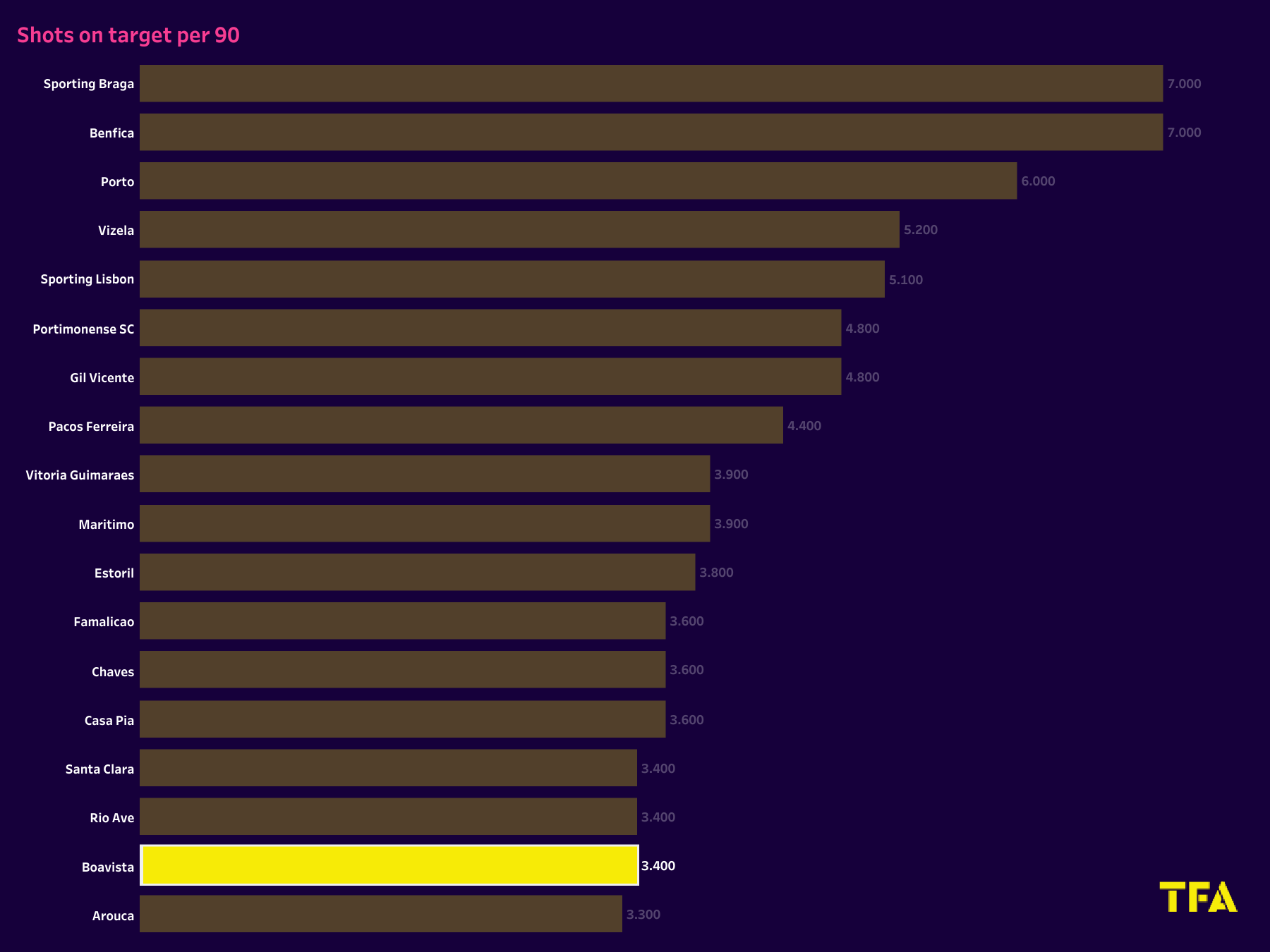 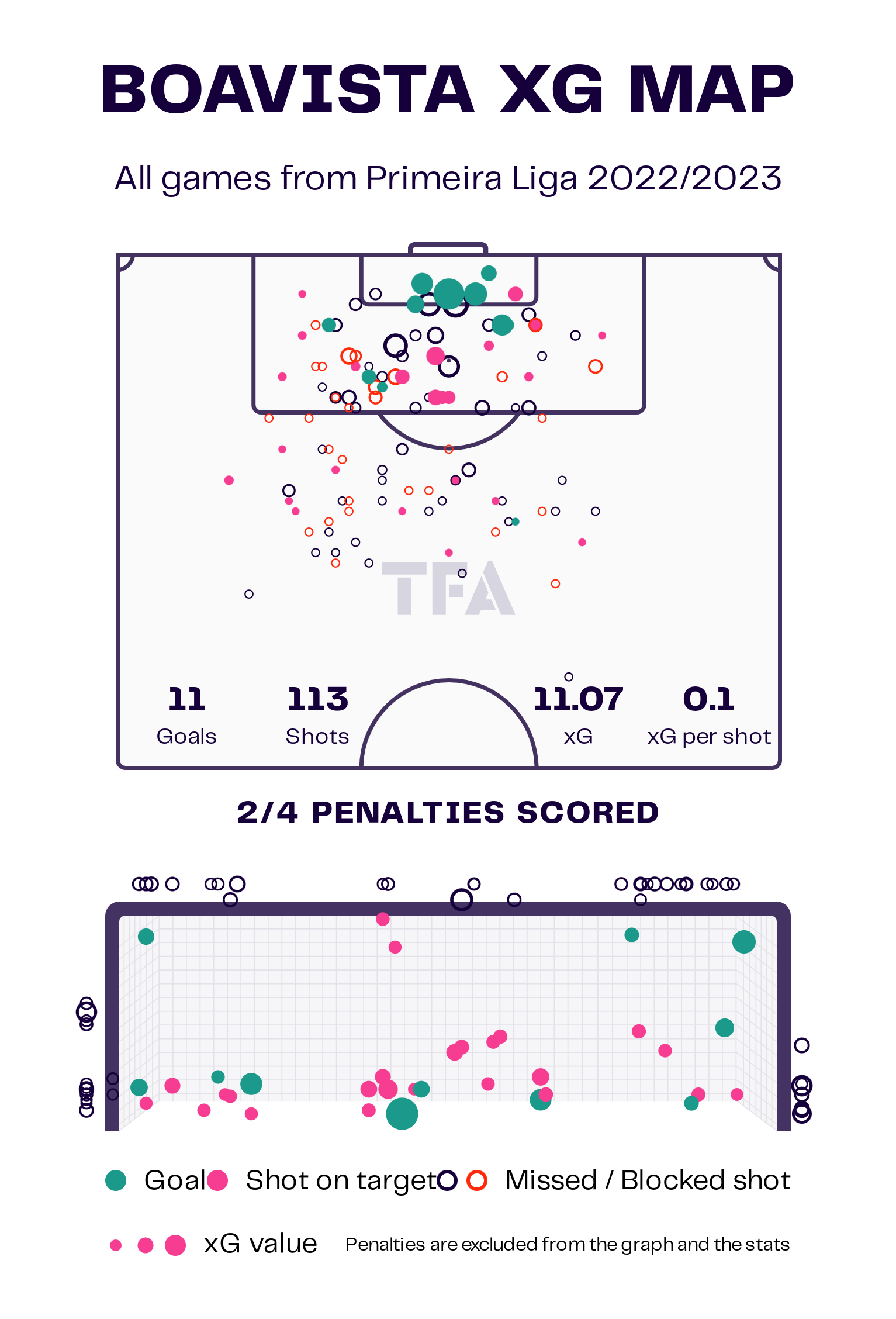 The 14 goals scored by Boavista are among the lower numbers generated in Liga Portugal 2022–23 in comparison to other teams. They are scoring 1.08 goals per match with an average xG rate of 1.09. Averaging 9 shots per match with an accuracy rate of 32.4%, Boavista has among the lowest number of shots on target in comparison to other teams. The viz above shows the team’s shot map from this season. While five of their goals have come from inside the six-yard box, we can see many of their shots missing the target or being blocked. They have also tried their luck from a distance but without much impact. Additionally, they have a 50% penalty conversion rate, scoring two out of the four awarded. 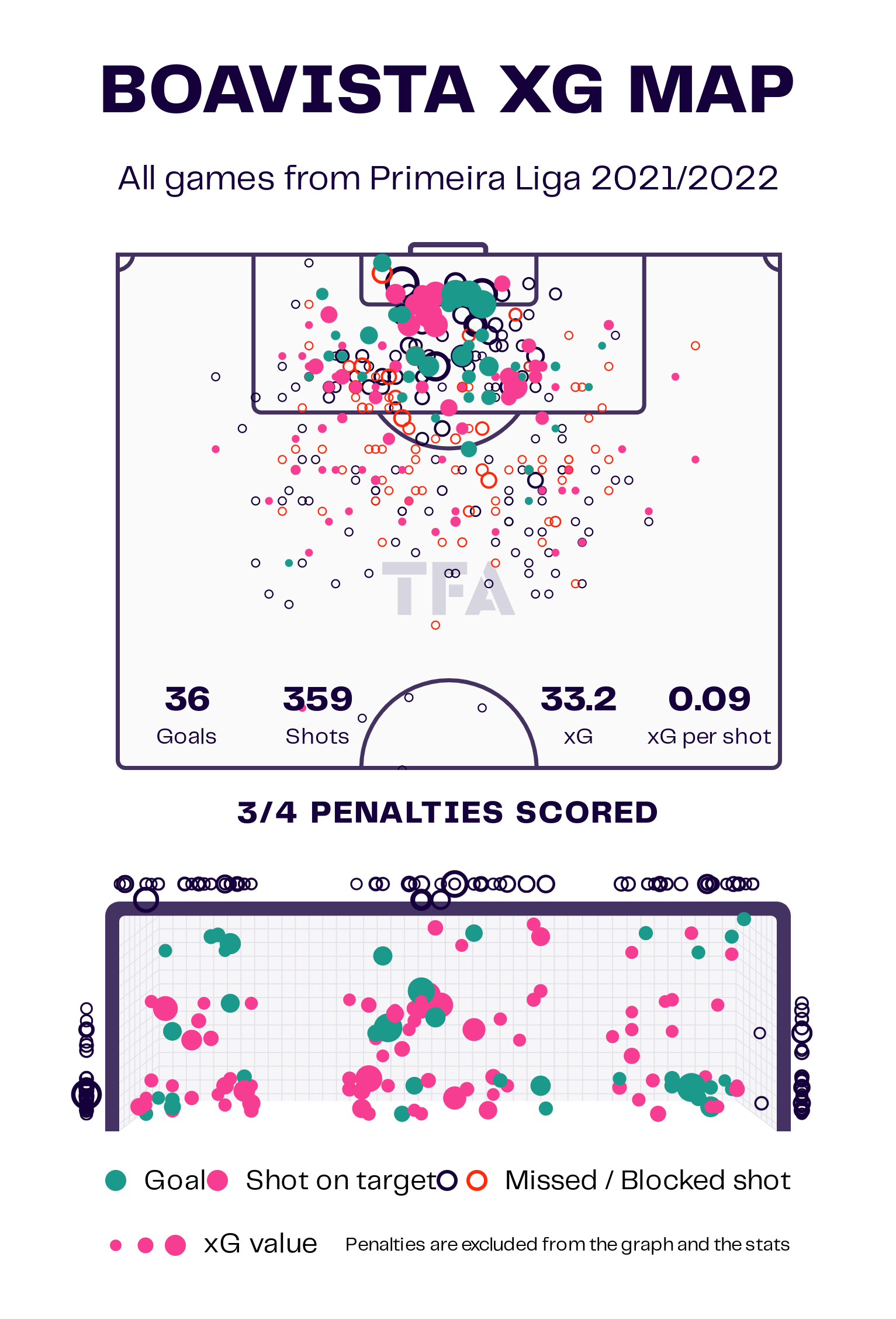 When compared to last season, Boavista scored 39 goals with an xG per match value of 1.07. They scored at a rate of 1.15 goals per match and took 10.68 shots per match, with a slightly higher accuracy rate of around 33.6%. There has been an apparent decline in terms of the numbers generated by Boavista’s attacking department this season. 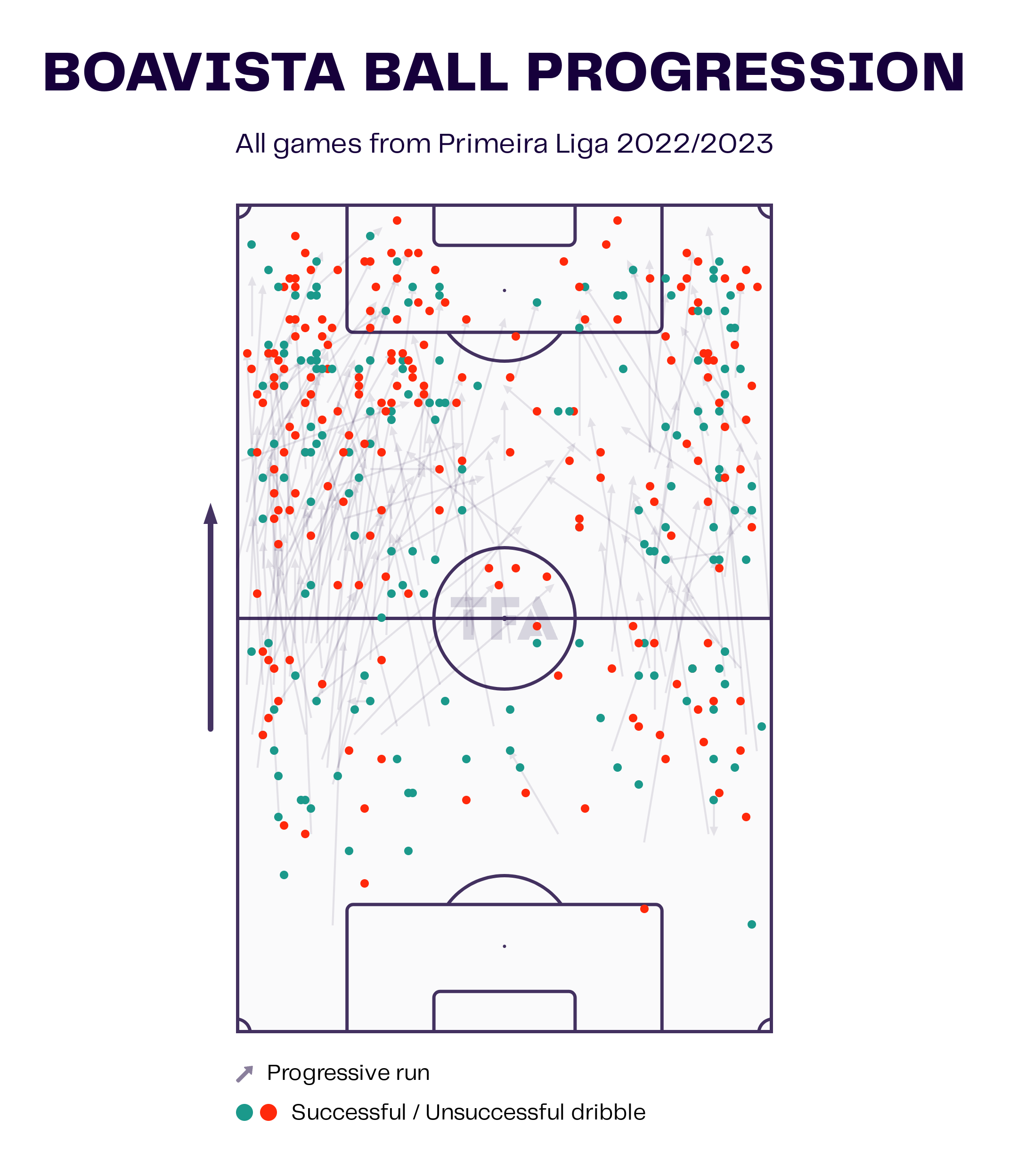 The above viz represents Boavista’s overall ball progression in Liga Portugal 2022/23. We can observe the team not making much use of the central attacking zones and instead progressing up the pitch using wider areas, particularly their left flank. The Os Axadrezados average 25.23 positional attacks and 1.62 counterattacks per match. While the efficiency rate of their positional attacks is really poor, their counterattacks are more potent compared to most other teams. While they have a success rate of 60% on dribbles, the number of times they attack through the central zone per match stands low at a count of 17. 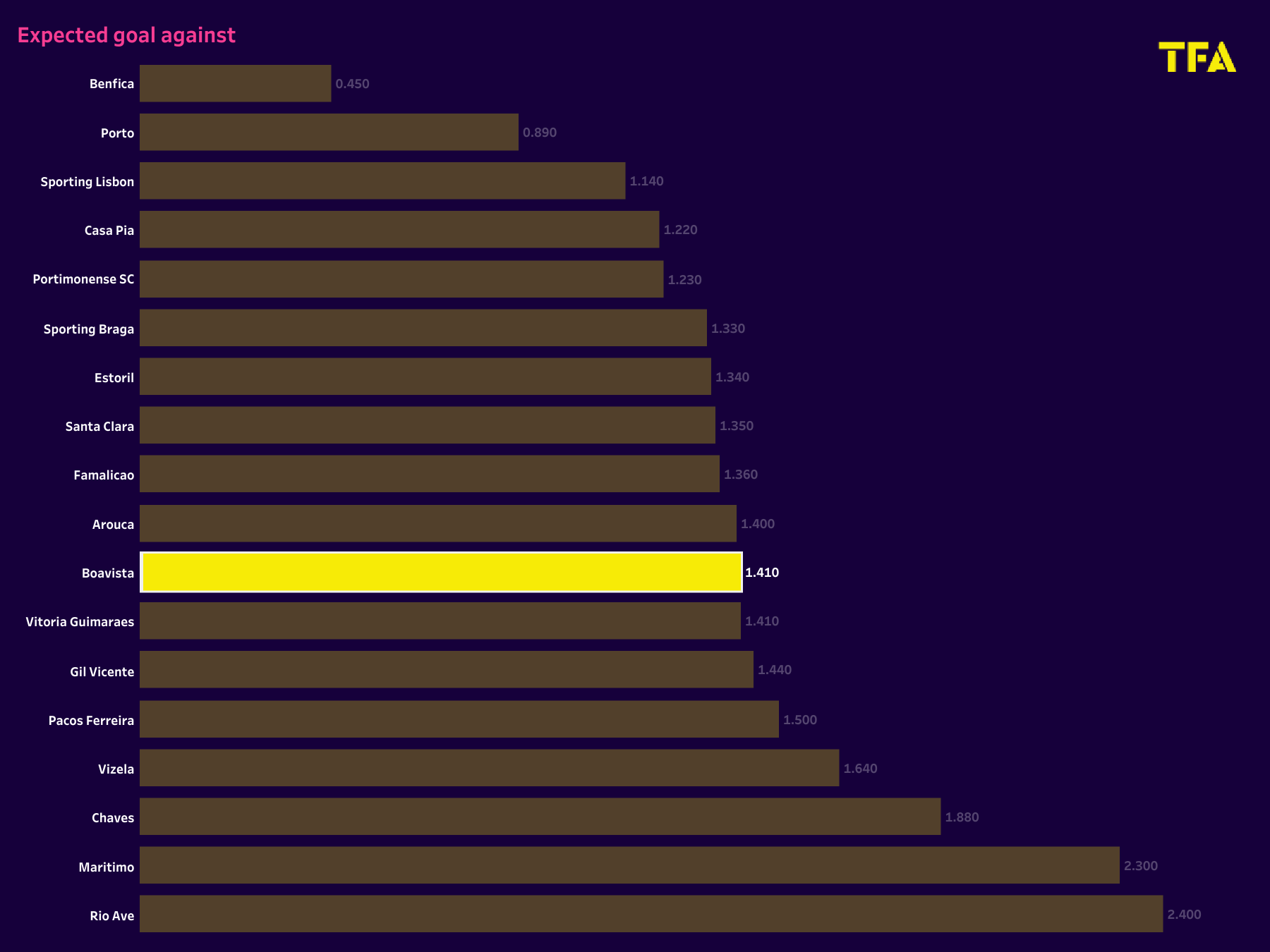 Boavista is struggling in the defensive department too. They have conceded 23 goals in 13 matches and have a goal difference of minus nine. With 1.77 goals conceded per match on average, they are letting in goals at a much higher rate than their current average xGA value of 1.31. 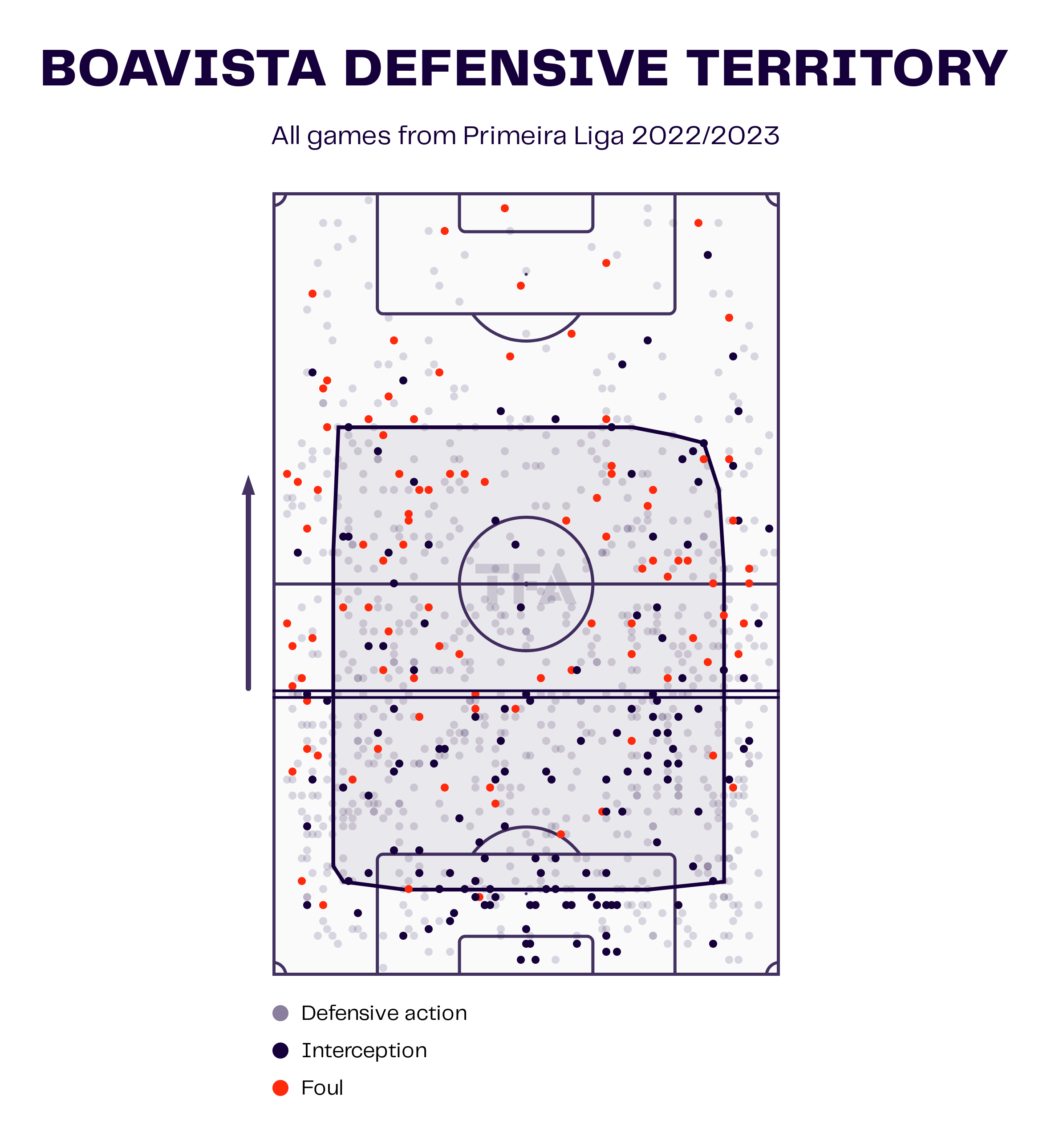 The viz above illustrates Boavista’s defensive territory in Liga Portugal 2022/23. The team possesses a low defensive line and has to make lots of defensive actions in the defensive third and even inside their penalty box. They make 42.15 interceptions and 14 fouls per match on average. The team wins around 53% of their defensive duels and 46% of their aerial duels. Furthermore, Boavista possesses a pressing efficiency rate of 41%. It is important to note that all these numbers are lower in comparison to most other teams.

In comparison, last season, Boavista conceded 52 goals throughout their campaign with a goal difference of -13. The team let in 1.53 goals per match on average, a figure lower than their current one this season.

Boavista will look to draw inspiration from their good displays earlier in the season to change their poor run of form. They need to gain some momentum in order to avoid falling further behind in the Liga Portugal standings. Attack and defence are the two departments Boavista will look to improve in the upcoming matches.