Sixth-placed Arouca remains hot on the tails of Casa Pia in fifth after comfortably beating 10-man Portimonense 4-0 at home in Liga Portugal on matchday 17. Arouca took the lead after six minutes through their star striker Oday Dabbagh before Alan Ruiz added a second goal after the half-hour mark. After Portimonense went a man down in the second half, Dabbagh then scored his sixth of the season, followed by Benji Michel, who made it four for the home team and sealed maximum points in style.

Arouca ended the previous year with a heavy 5-1 defeat at the hands of Porto, but seem to have found their mojo since the turn of the new year. Thus far, the team is unbeaten in Liga Portugal in 2023, having played three matches (2W, 1D). This run has propelled Arouca to sixth in the table with 26 points from 17 games and massively boosted their chances of securing a high finish. Let’s now look at some of the stats for Arouca in the current season of Liga Portugal. 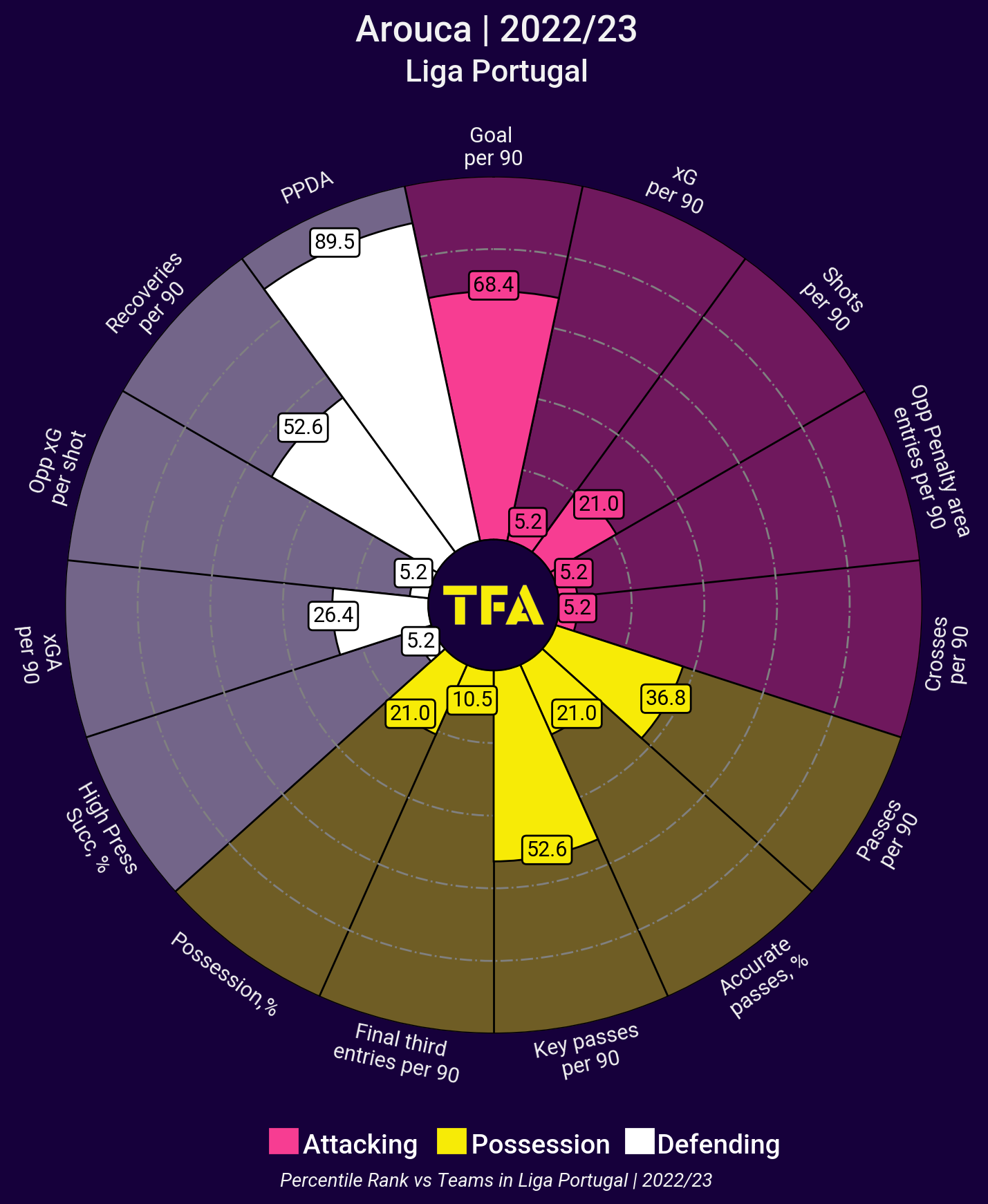 The viz above shows the percentile rank of Arouca’s stats in comparison to other teams in Liga Portugal. In the attacking department, Arouca possesses above-average stats for goals per 90 but is below par in the rest of the indicators, like shots and crosses per 90. In the possession department, the team has comparatively better stats for pass attempts, and key passes per 90. Meanwhile, Arouca have a high percentile rank for PPDA and an average rank for recoveries per 90 but have shortcomings in the rest of the areas under defence. 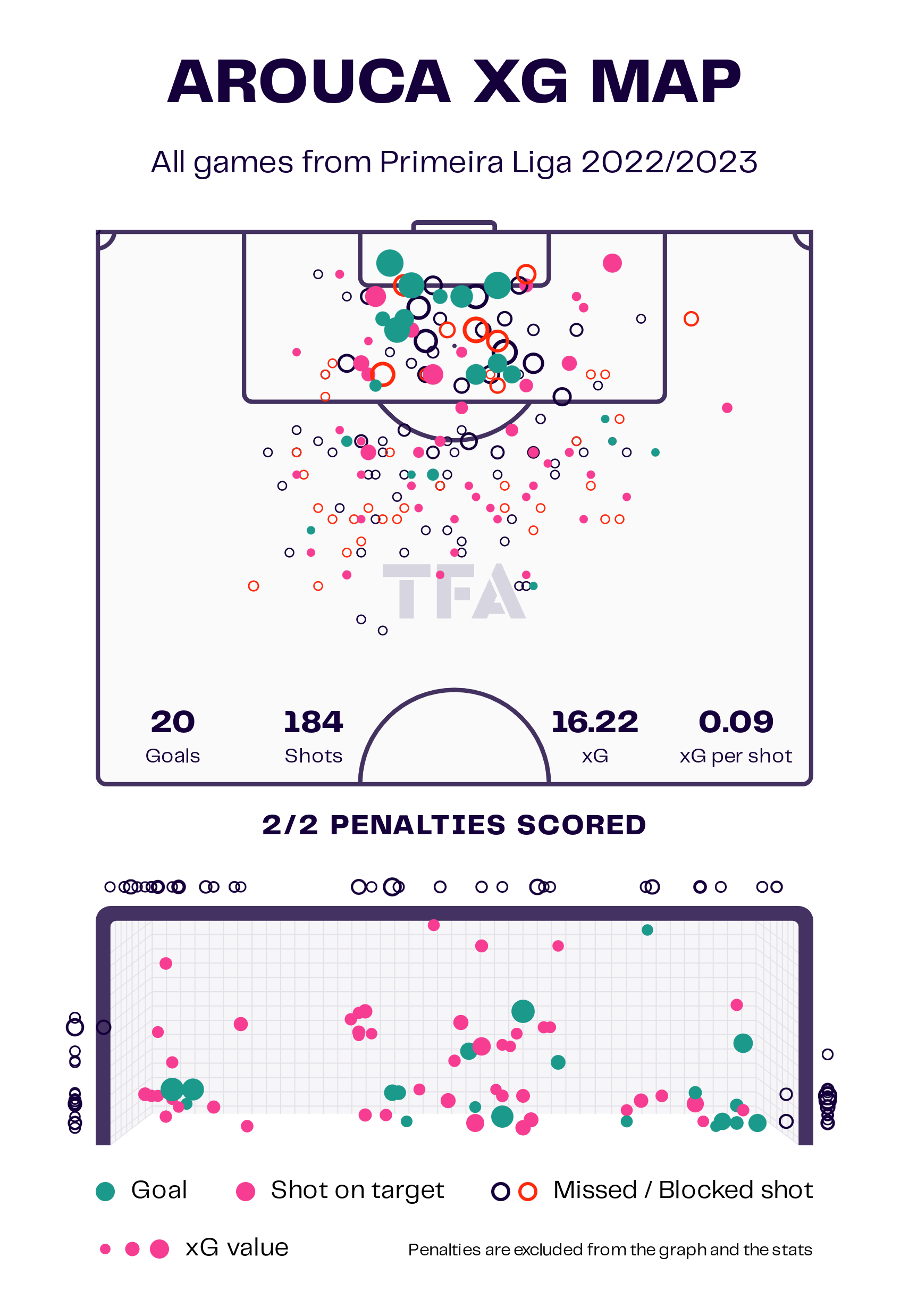 This season in Liga Portugal, Arouca have scored 17 goals with an xG count of 16.22 (excluding penalties). They have scored quite a few of their goals from near the six-yard box and from long range outside the penalty box as well. They are successful in taking shots from dangerous locations inside the penalty box as well as from a distance. Arouca scores 1.29 goals per match, which is higher than their xG average of 1.04. The team averages almost 11 shots per 90 minutes with an accuracy rate of 37.7%. 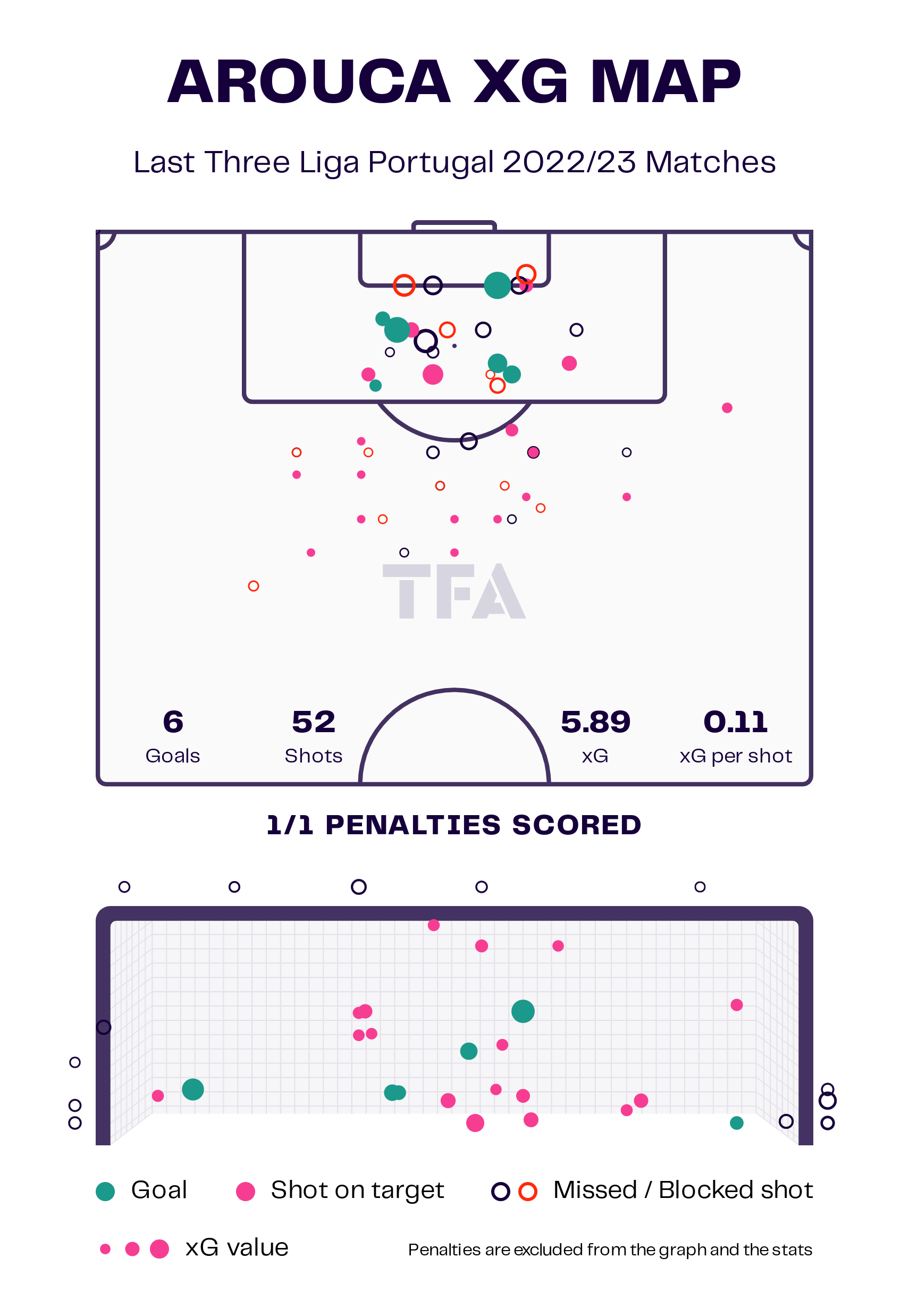 In the last three games, Arouca have scored a total of seven goals from 52 shots, putting them at an xG of 5.89 overall (excluding penalties). All of the goals have come from inside the penalty box, and the team has a slightly higher xG per shot of 0.11. 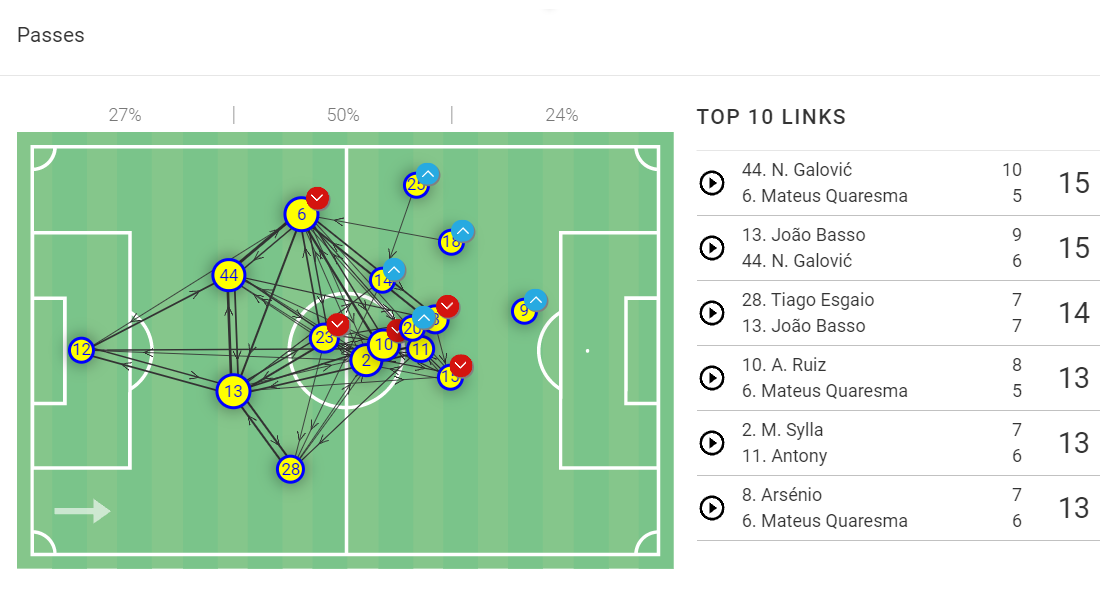 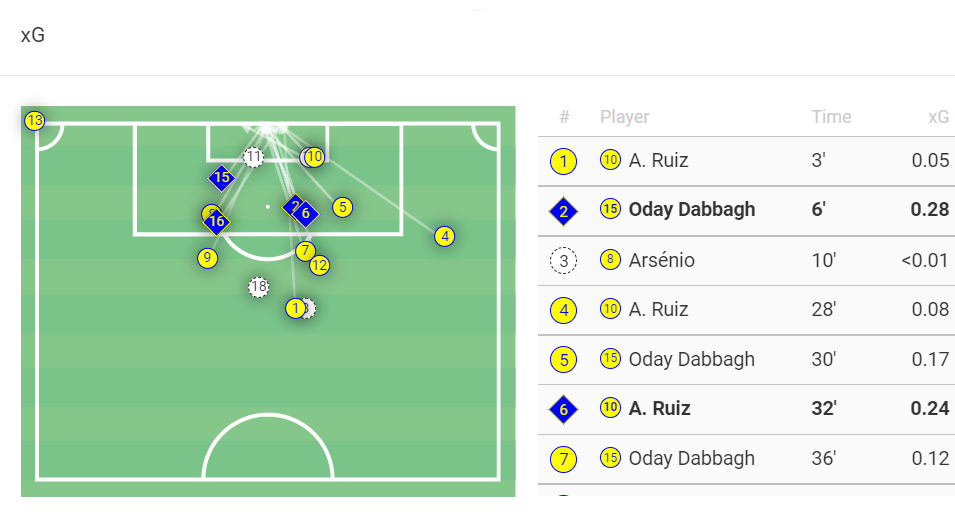 The above visuals depict Arouca’s pass and shot map for their most recent Liga Portugal outing against Portimonense. Apart from the defenders, the rest of the team can be seen attempting to play high up the pitch. They play with four at the back and make sure to maintain possession against most of their opponents. They average 52.61% possession per 90, and they complete 434 passes per match on average.

Against Portimonense, the team took 18 shots, of which 12 were on target, and managed to score four goals. Arouca finished the match with a high xG of 2.06. 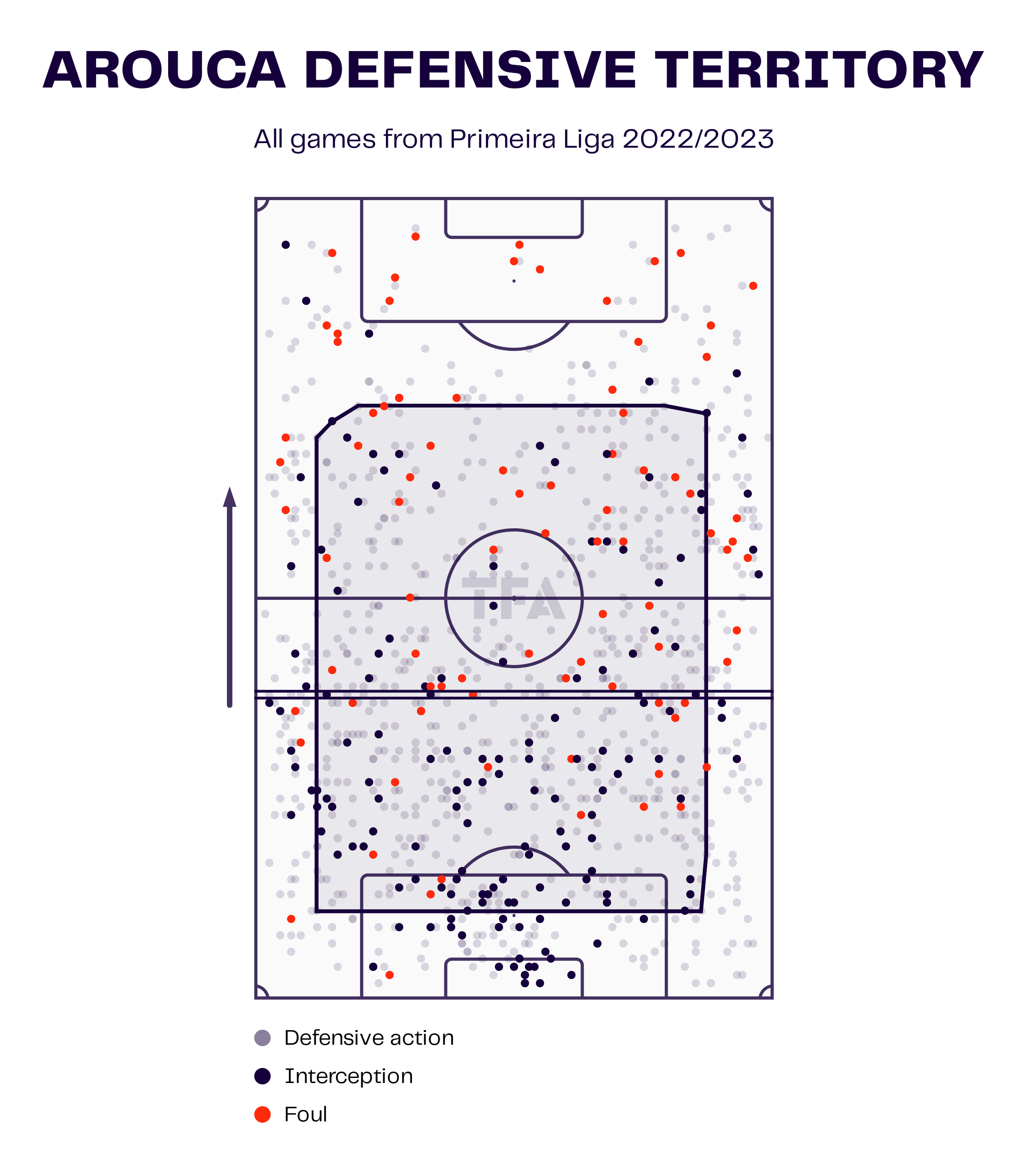 The viz above depicts the stats for Arouca’s defensive territory in Liga Portugal 2022/23. It can be observed that Arouca are involved in a lot of defensive actions in the defensive third, including inside the penalty box. They make 47 interceptions per 90 minutes and give up 14 fouls on average. Additionally, the team wins 57.1% of their defensive duels and 46.8% of their aerial duels. The team concedes 1.47 goals on average, which is one major aspect of their defensive gameplay that can be improved upon. 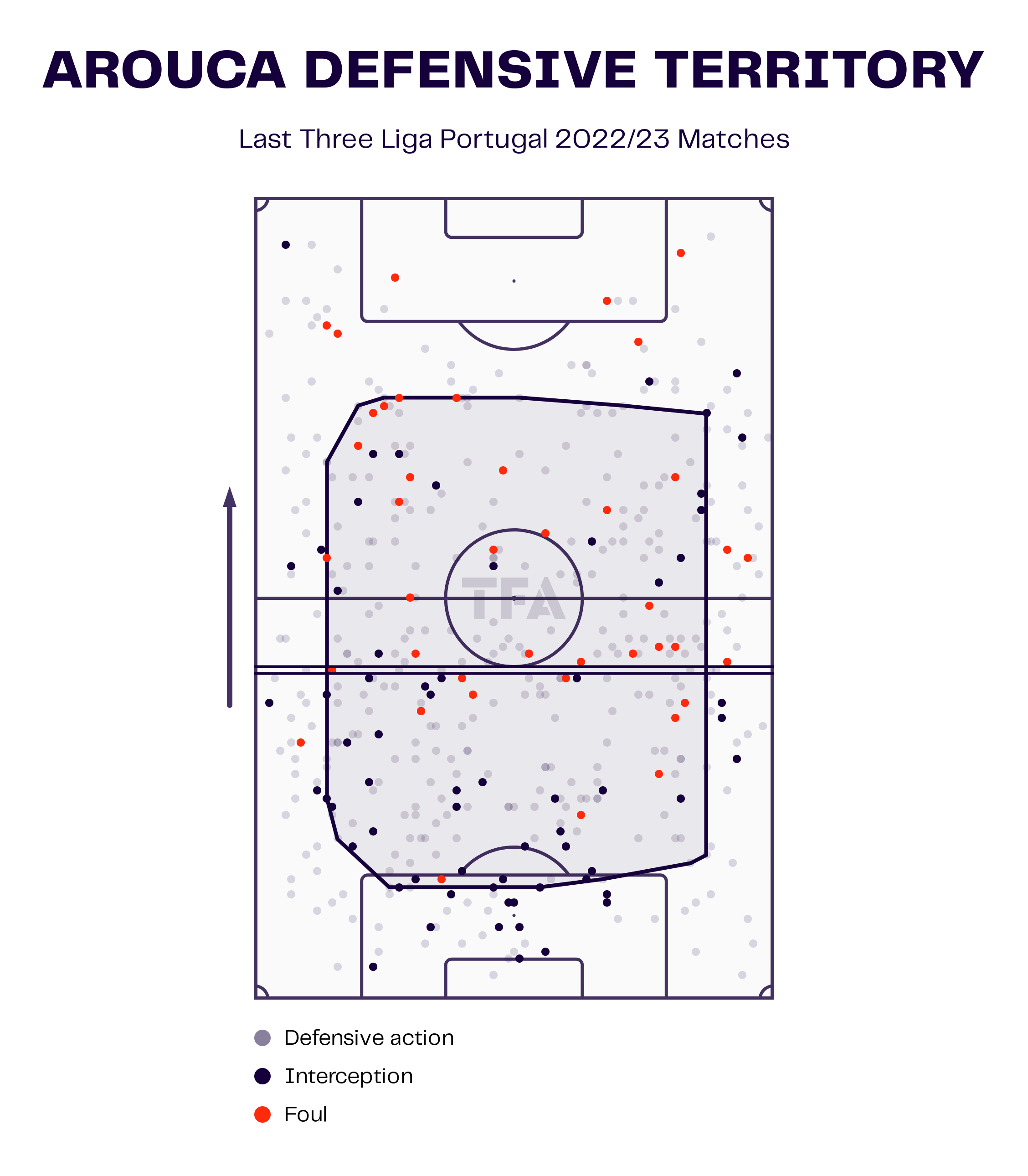 In the last three outings, the team has given up a penalty but has fared well in other departments while defending. They have conceded only one goal in these three matches, which has shown their solid intent in defence. We can also see that Arouca’s defensive line has been stronger in recent games than in previous ones.

Overall, there is a long way to go before the 2022–23 Liga Portugal season draws to a conclusion. Arouca will be keen for more consistent results in the following weeks to carry on with the momentum and achieve a high finish.