With the winter transfer window around the corner, many clubs across Europe will be looking to bolster their squads in key areas. Among them are Benfica, who seem interested in bringing 18-year-old Andreas Schjelderup to Liga Portugal. The Norwegian youth international is currently playing for the Danish Superliga club FC Nordsjlland and is regarded as a promising young player. In 2022/23, he netted ten goals in the Danish top division, helping his club finish first in the regular phase of the championship. Schjelderup usually features as a left-sided forward for Nordsjlland but he can also play as a centre forward or an attacking midfielder. Let’s now look at some additional stats that showcase why Andreas Schjelderup is drawing admiration from a Liga Portugal club. 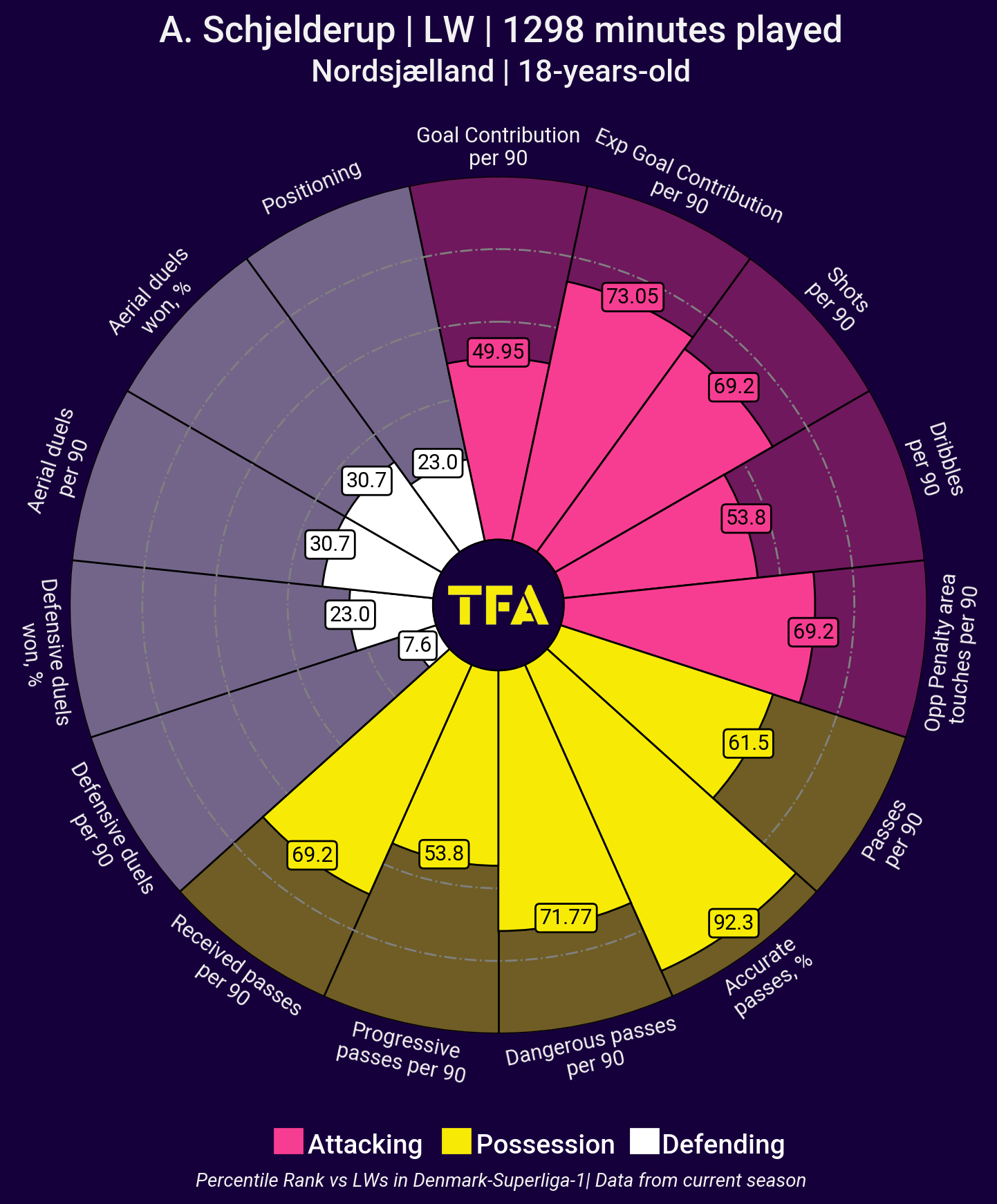 This season, Schjelderup has played a total of 17 matches for FC Nordsjlland in the Danish Superliga. Averaging around 75 minutes per game, he started 16 matches and came on as a sub in one. The above viz shows the percentile rank of the player’s stats in comparison to the other players featured as left-sided forwards. We can observe that Schjelderup has a high rank in indicators like accurate passes, expected goal contribution, and dangerous passes. He also possesses a decent rank under shots, opposition penalty area touches, and received passes. 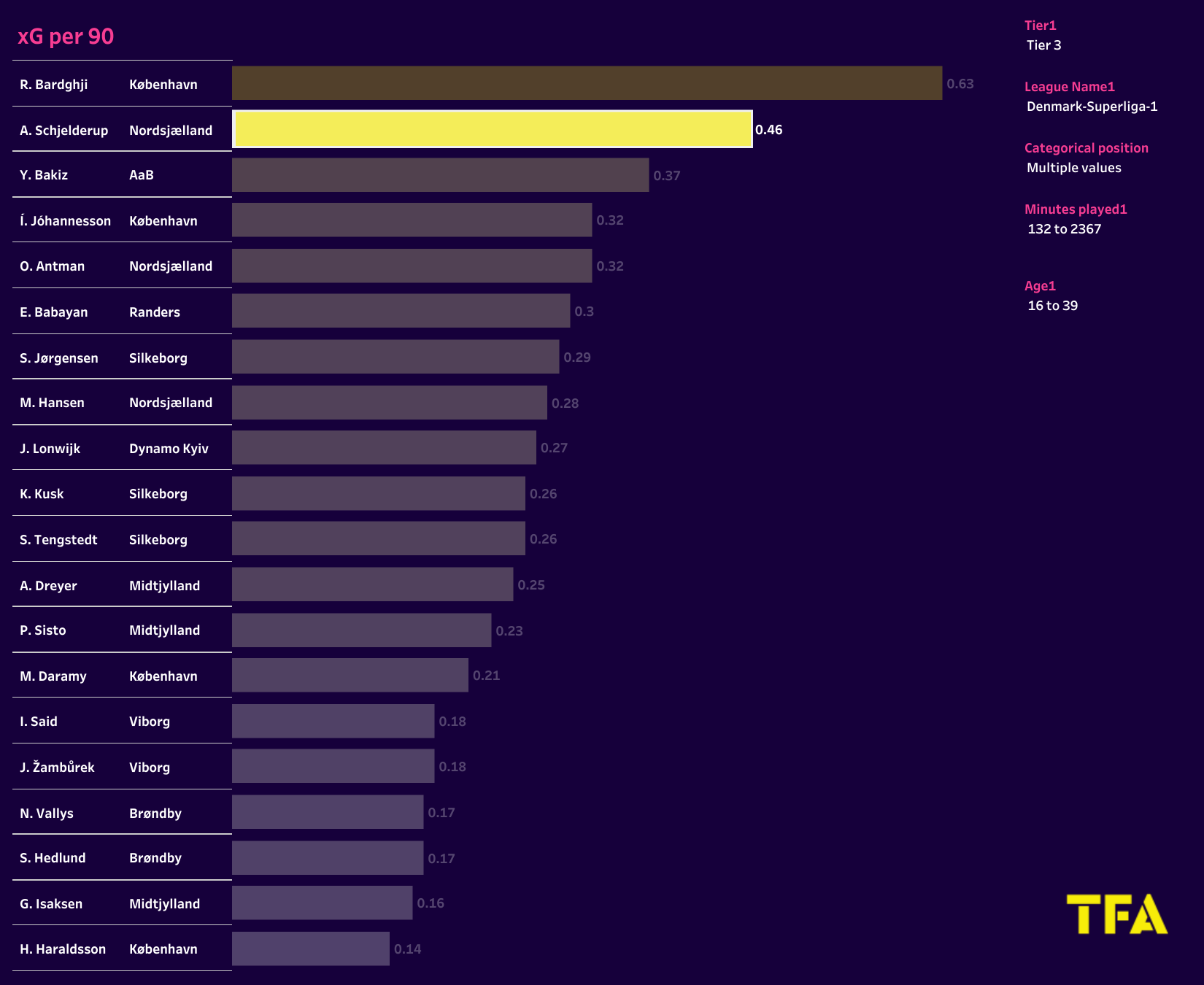 The ten goals scored by Schjelderup in the Danish Superliga are the most so far this season. He also provided a solo assist for his team. The benchmarking graphic above compares the player with other players playing in a similar position on the basis of expected goals (xG). The 18-year-old forward’s xG equates to 0.46 per 90 minutes, placing him second in the ranking. 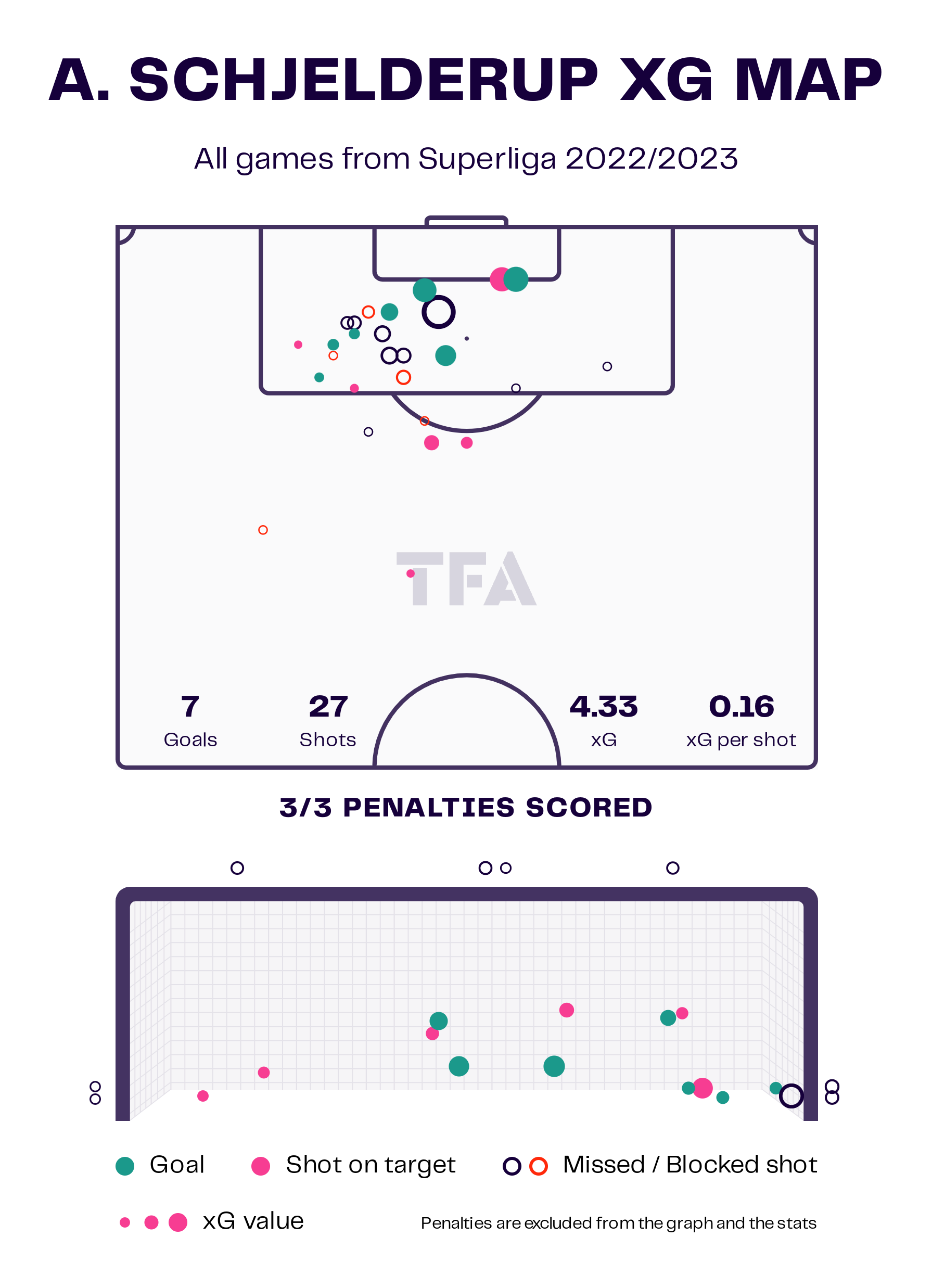 The visual above depicts the player’s shot map from the Danish top division this term. He has taken almost all of his 27 shots from the left side of the pitch, with an xG of 4.33 excluding penalty goals. Additionally, the majority of his shots are from inside the penalty box, and some are from the edge of the box. While all his goals have come from inside the box as well, two of them have come from the proximity of the 6-yard box. Schjelderup averages 2.1 shots per match with an impressive accuracy rate of 53.3%. These numbers highlight the youngster’s finishing ability and composure in front of the goal. 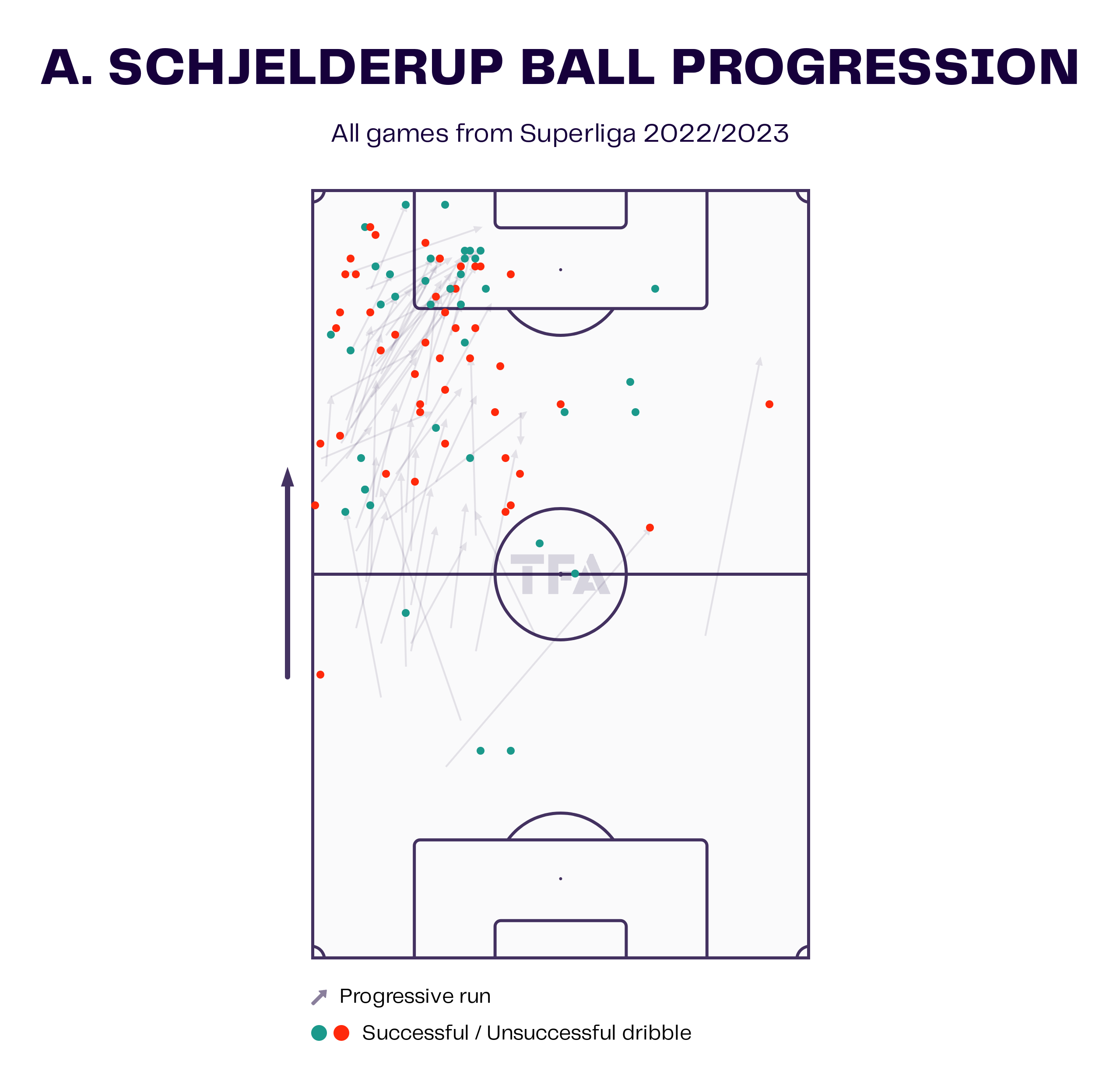 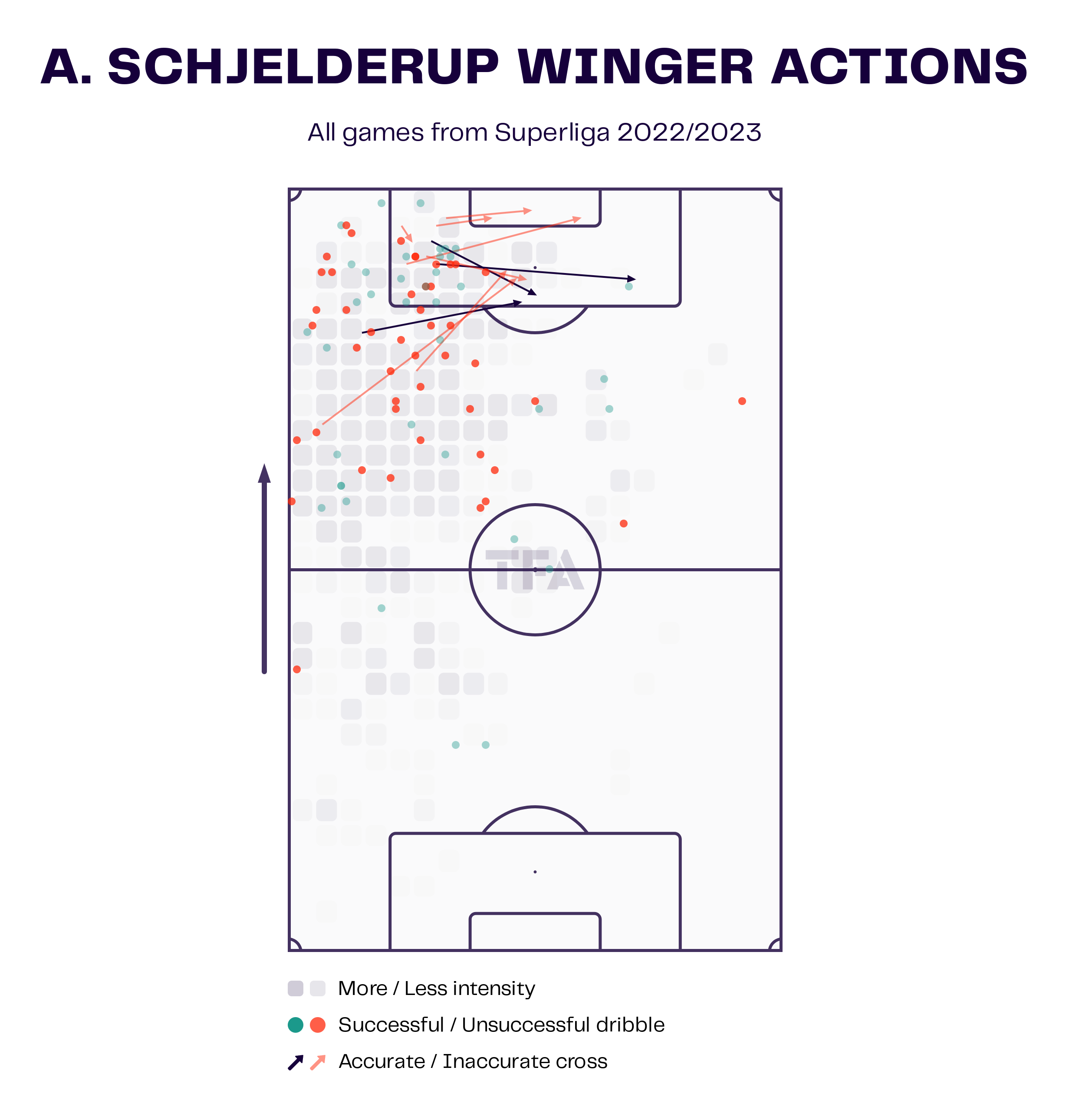 The Norwegian also possesses the ability to advance the ball into dangerous positions, as shown in the visuals above. Functioning as a winger, Schjelderup performs most of his attacking actions on the left flank in the final third. From the wide positions near the touchline, he tries to dribble, pass, or cross the ball into the penalty area. He averages 34 passes per match with 83% accuracy, of which 3.54 are into the final third and 2.3 are into the opposition’s penalty area. The attacker also makes 3.9 progressive runs along with 5.82 dribbles per match. All of these are decent numbers in comparison with similar players and showcase the versatility of Schjelderup in assuming various roles across the attacking lines.

What could be the youngster’s role at Benfica? 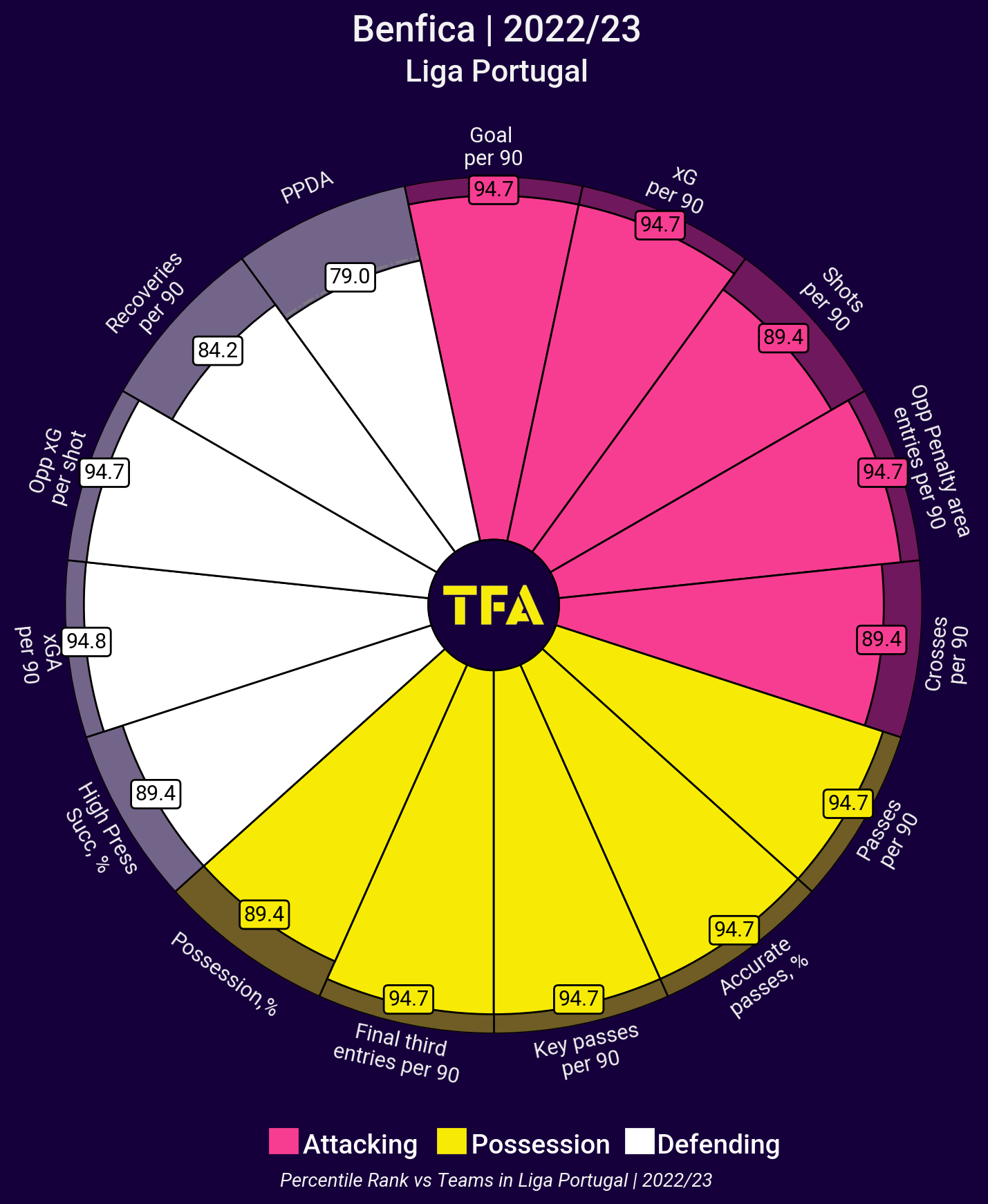 Benfica are currently cruising in Liga Portugal with an eight-point lead at the top of the league. They are amidst an unbeaten run as they chase their first league title since the 2018-19 season. The Eagles are also in the knockout stages of the UEFA Champions League. Therefore, they could be willing to bring in Andreas Schjelderup to add more talent and reinforcement to their overall squad for what could prove to be a prolonged season.

The 18-year-old prospect can provide cover in a variety of positions across the attacking line for players like Goncalo Ramos, David Neres, and Joao Mario. Otherwise, he could replace players struggling for match time like Julian Draxler and Diogo Goncalves. 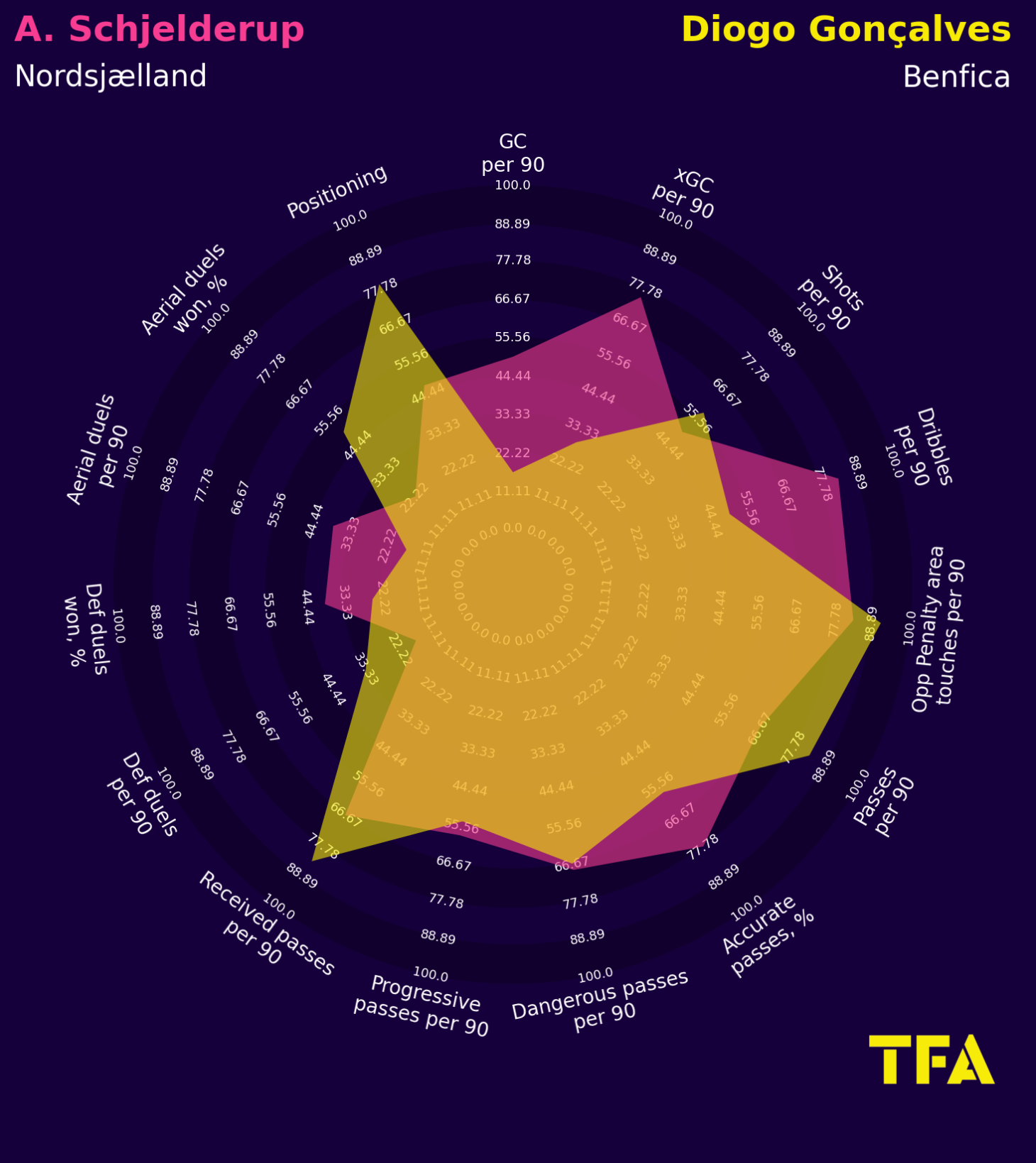 The viz above compares the performances of Schjelderup and Goncalves, who plays as a winger, in their respective leagues. It can be observed that the Norwegian has the upper hand in some stats over his counterpart, namely goal contributions, dribbles, accurate passes, and defensive and aerial duels. What’s interesting is that the teenage talent will have plenty of time to uncover his potential at a decorated club like Benfica.

Andreas Schjelderup’s move to Liga Portugal beckons. He is a young attacker who is not only capable of scoring goals but can also operate in various roles across the front line. He can progress the ball forward seamlessly because of his sound technical and passing abilities. In recent times, the young prospect could certainly develop into the next famous Norwegian footballer at an esteemed club like Benfica.