Alex Grimaldo has been one of the most consistent performers for Benfica over the past several seasons in Liga Portugal. Formerly a Barcelona youth, the left-back has donned the Benfica colours since 2016. At the age of 27, Grimaldo has become one of the best players for the Eagles and is also considered one of the best left-backs in the Portuguese top division.

The Spaniard had an impressive last season in the top division. His five goals and five assists contributed to his team finishing third and qualifying for the UEFA Champions League. This season, Grimaldo has continued with the same levels of performance. He has one goal and three assists under his belt thus far, as his team leads the current league standings. He has also been a key performer for Benfica in this season’s Champions League, with two further goals and assists to his name. Let’s now look at some stats that capture Alex Grimaldo’s performances as a Benfica player in Liga Portugal 2022/23. 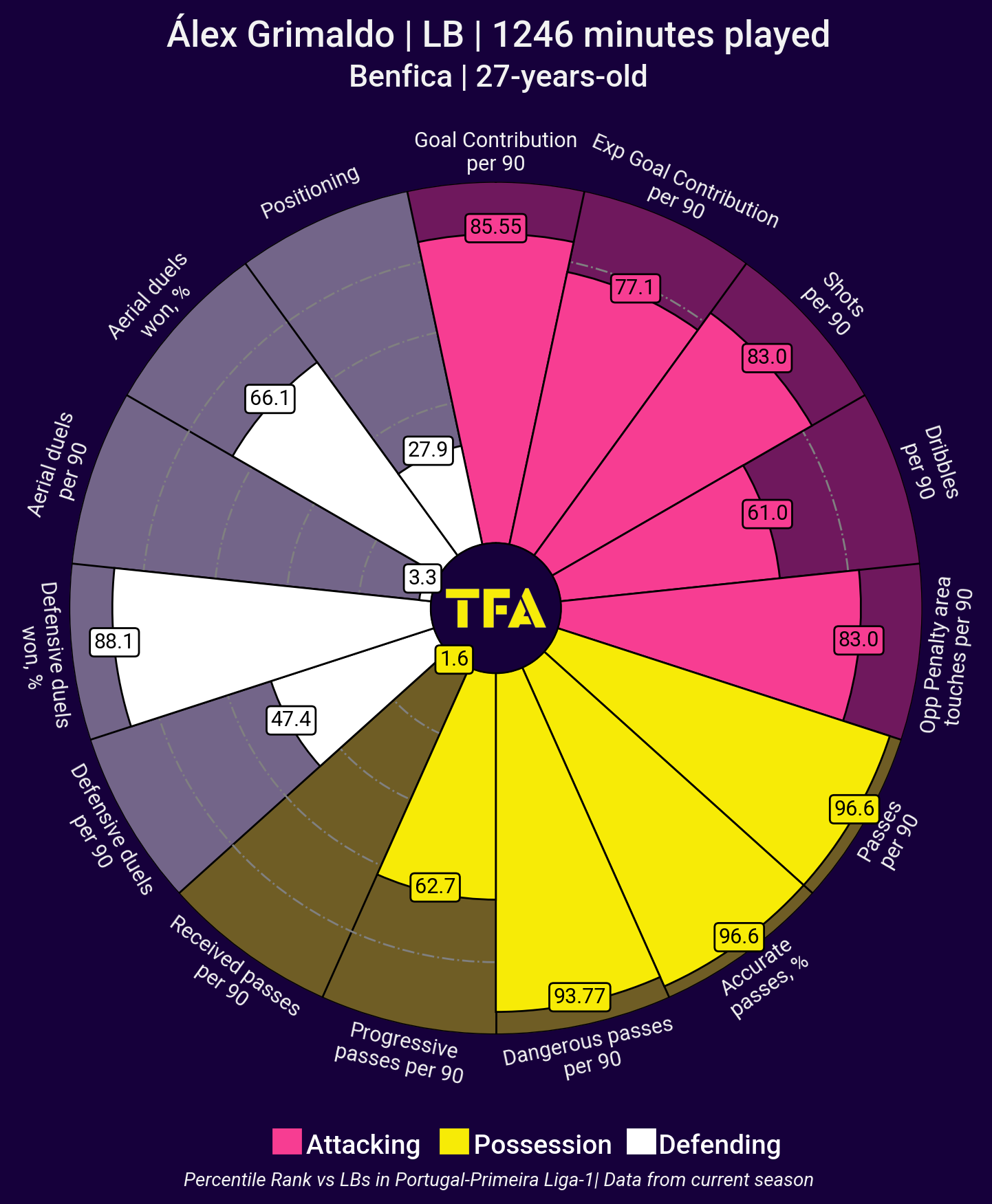 Alejandro Grimaldo has played 14 matches for Benfica in Liga Portugal 2022–23. Averaging 89 minutes per game, he has made it to the team of the week five times. The above viz shows the percentile rank of the player’s stats in comparison to the other players featuring as left-backs in the current season of Liga Portugal.

We can observe that Grimaldo dominates in the possession department by ranking upwards of the 90th percentile for dangerous passes, accurate passes, and his ability to find passes as well. The player also enjoys a high rank under attacking indicators like goal contribution, shots, and penalty area touches. Finally, a couple of other areas where he impresses are in winning defensive duels and aerial duels to some extent. 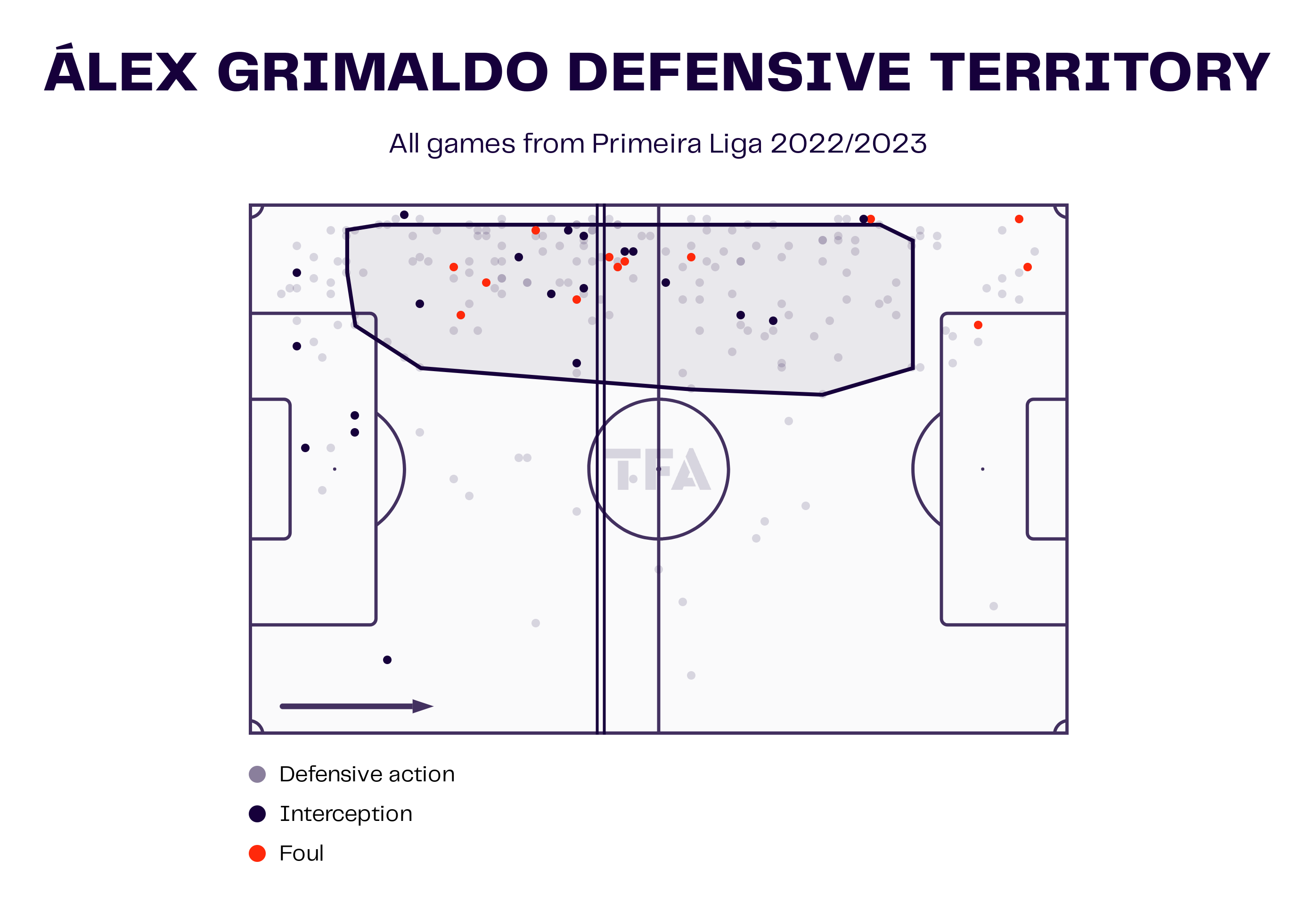 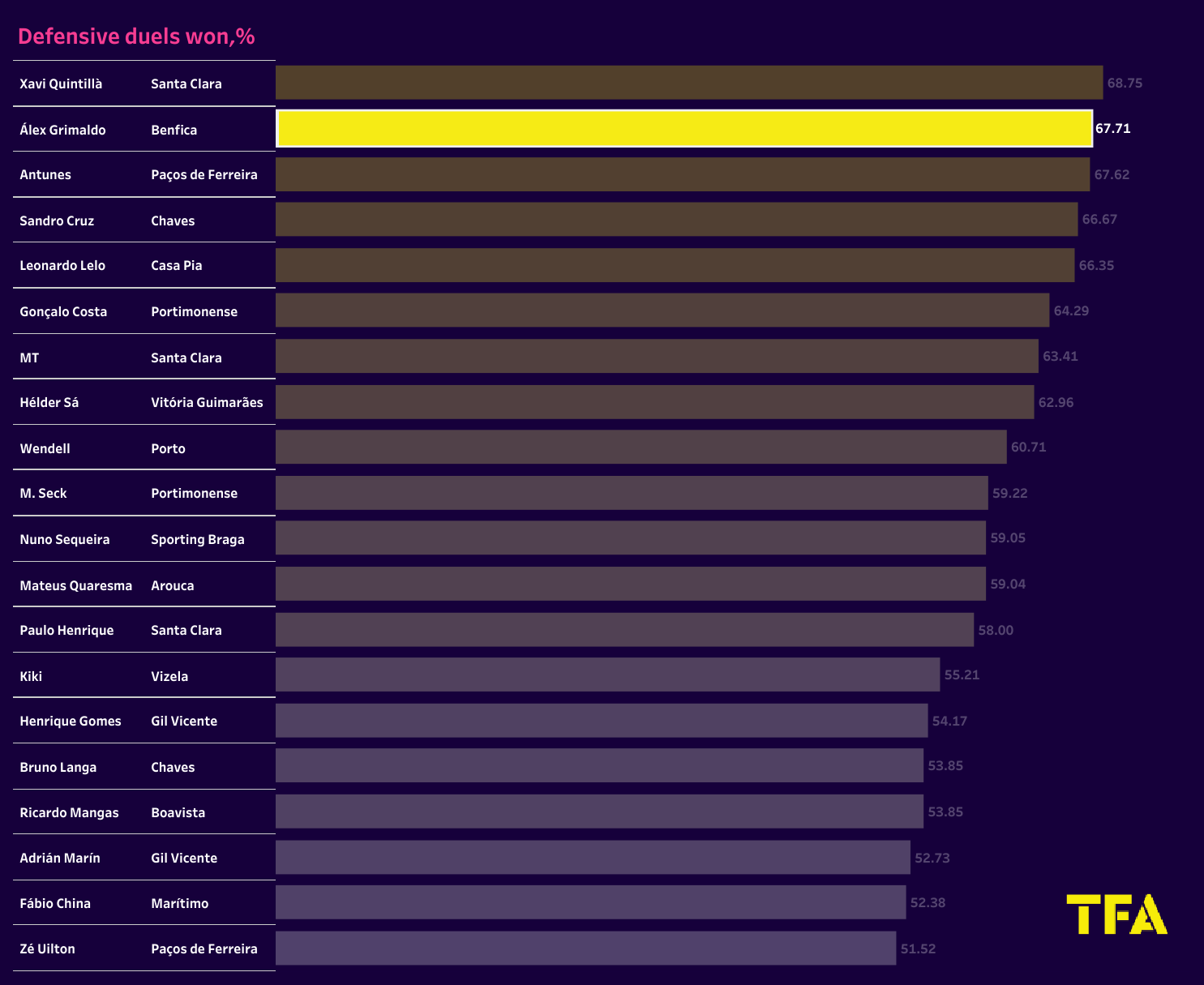 As a left-back, Alejandro Grimaldo’s primary role is in defence but he also enjoys going forward and contributing to the team’s offensive output. From the first viz above we can see that his average position along the defensive line is quite close to the half-line. He moves up and down the pitch and engages in a lot of defensive actions on the left side. The 27-year-old Spaniard makes 7.3 recoveries and 2.34 interceptions per match. He contests 6.83 defensive duels per match with a success rate of 67.1%, which is one of the highest among other left-backs, as indicated in the second viz. Furthermore, Grimaldo attempts 1.41 aerial duels per match with a decent success rate of 52.4%. 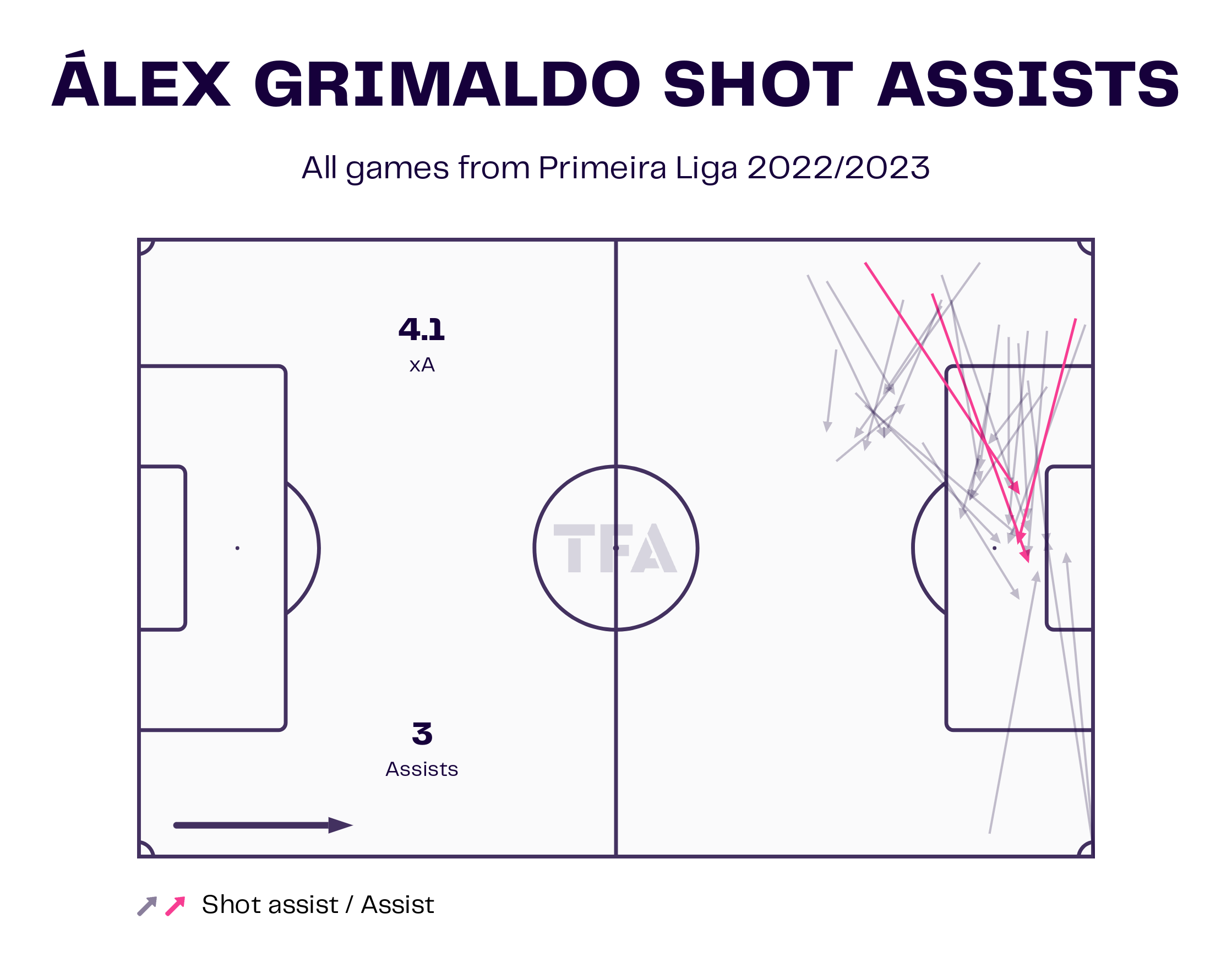 Alejandro Grimaldo has always helped Benfica by providing assists and creating openings for the attackers. Sometimes he also takes up the responsibility of finding the back of the net himself. Thus far, the Spanish left-back has scored one goal and provided three assists in Liga Portugal 2022/23. Currently, his xA rate per match stands at 0.27, and he is averaging 2.01 shot assists per 90 minutes. 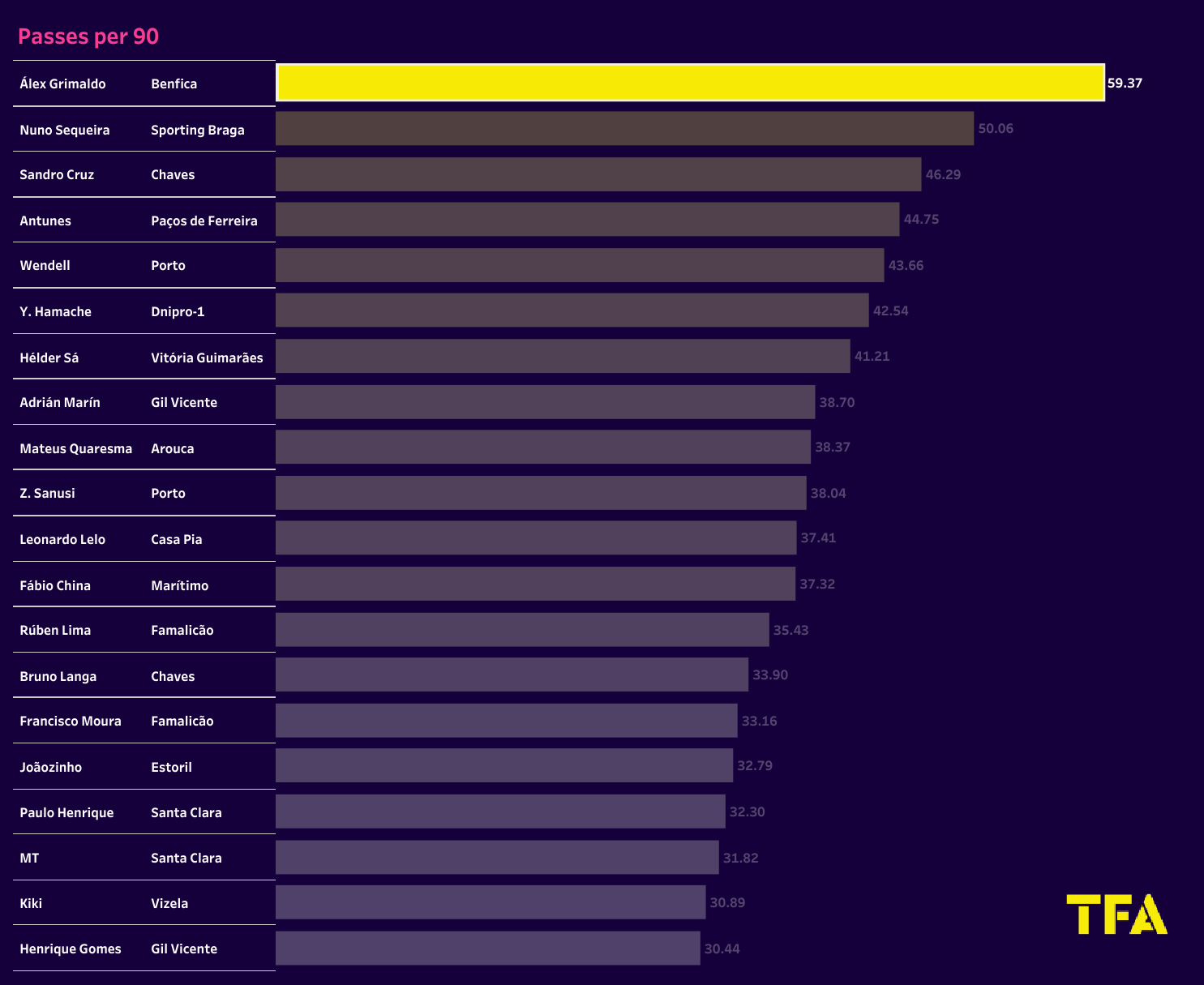 The above viz depicts the stats of left-backs in Liga Portugal with respect to passes per 90 minutes. Alex Grimaldo is at the top by attempting 59.37 passes per match with 85.2% accuracy. Additionally, he makes 4.55 passes to the final third and 6.29 passes into the opposition penalty box per match, which leads to key scoring chances for his Benfica teammates. He has created six big chances this season and averages 2.5 key passes per 90 minutes. 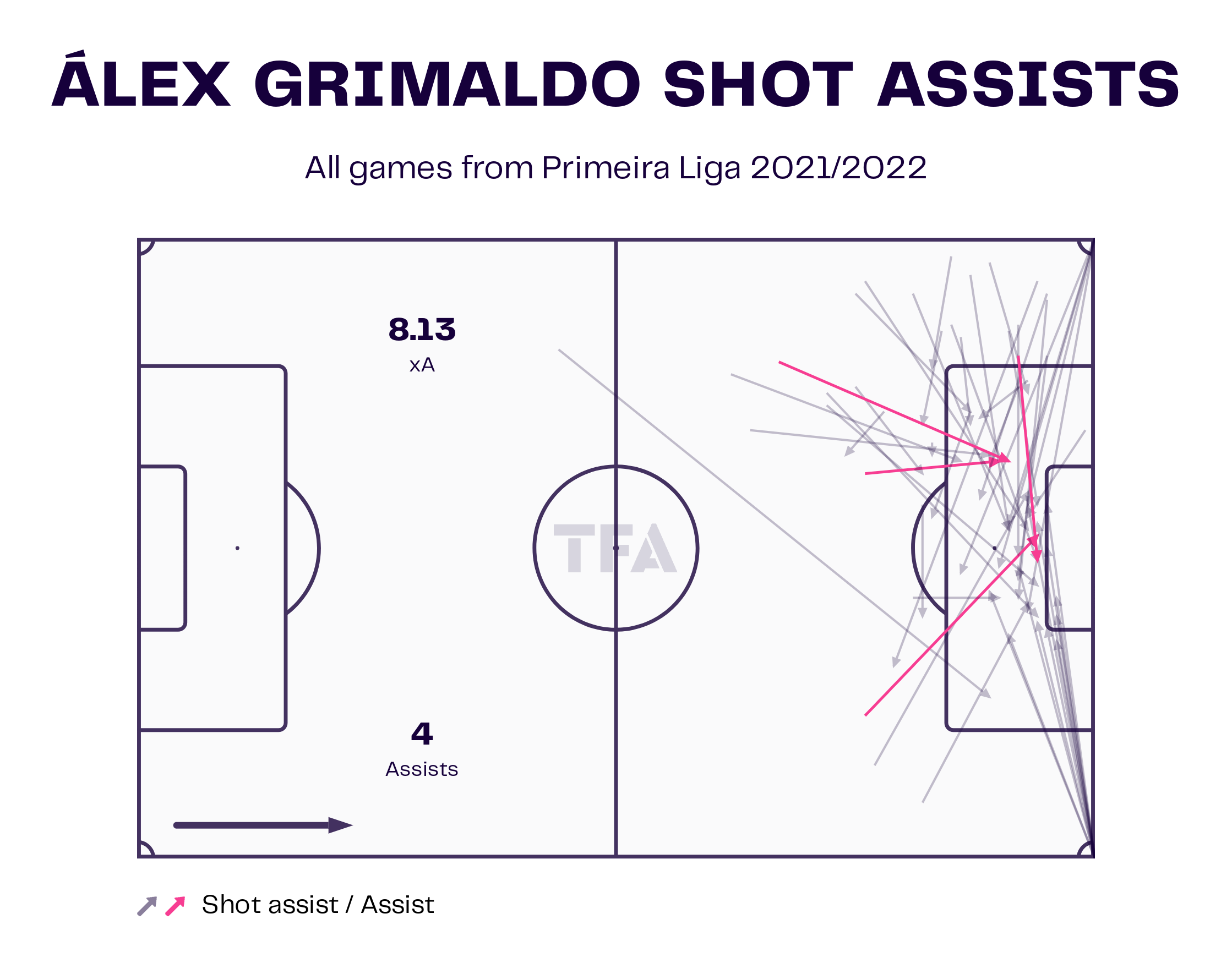 In the 2021/22 season, Grimaldo scored five goals and provided five assists for Benfica in Liga Portugal. He was averaging 0.29 xA and making 1.88 shot assists per match. He created 13 big chances while averaging 2.0 key passes per 90 minutes. The left-back is on course to improve upon his assist tally from last season but will be keen to add more goals to this season’s tally.

The creativity of the Spanish left-back 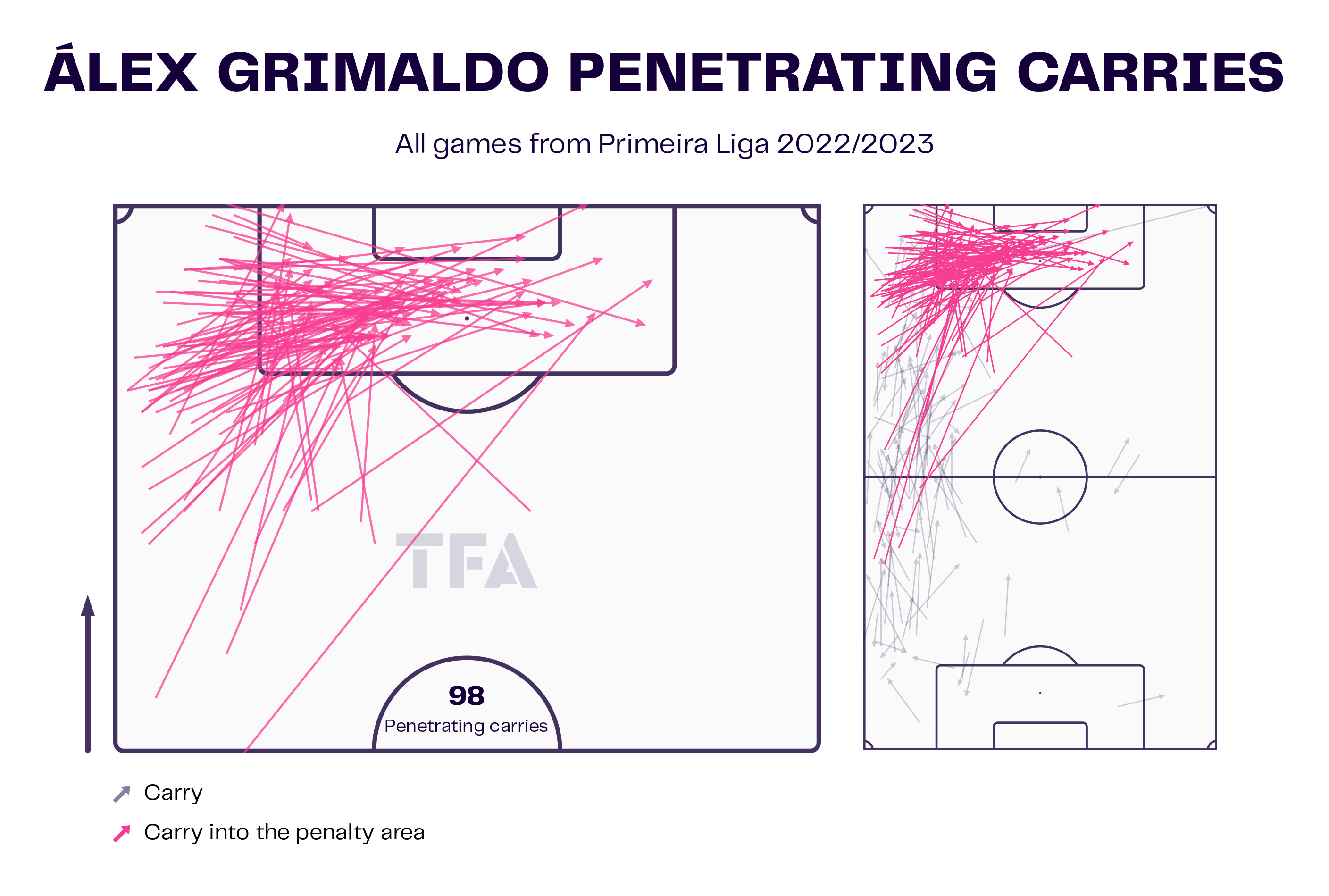 Alejandro possesses the characteristics of a modern attacking full-back who can progress with the ball and breach the opposition’s defensive line with effect. He sprints up and down the left flank constantly and likes to attack spaces nearby and inside the penalty area, as seen in the above viz. The left-back has made 98 penetrating carries into the 18-yard box so far in Liga Portugal this season. 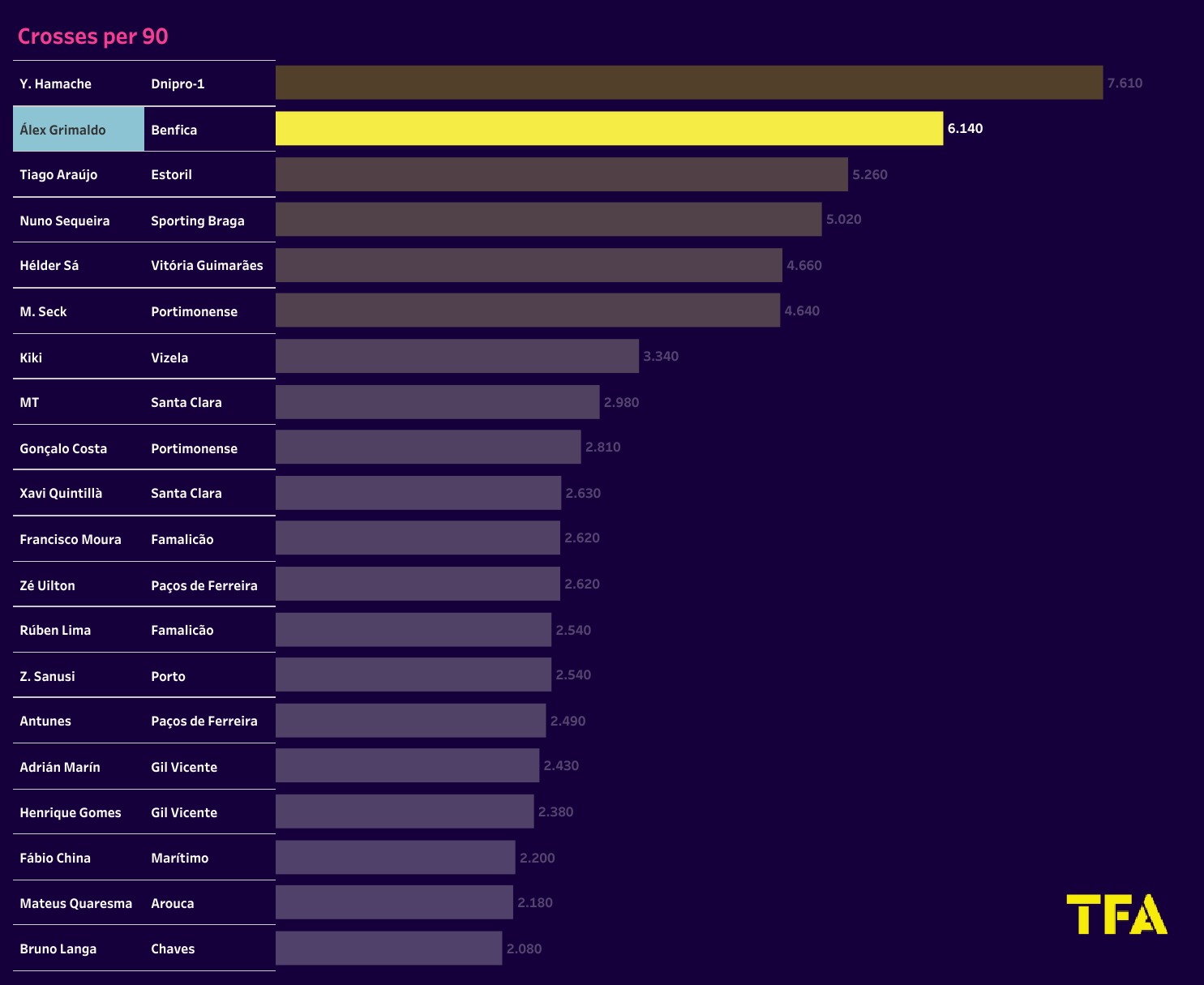 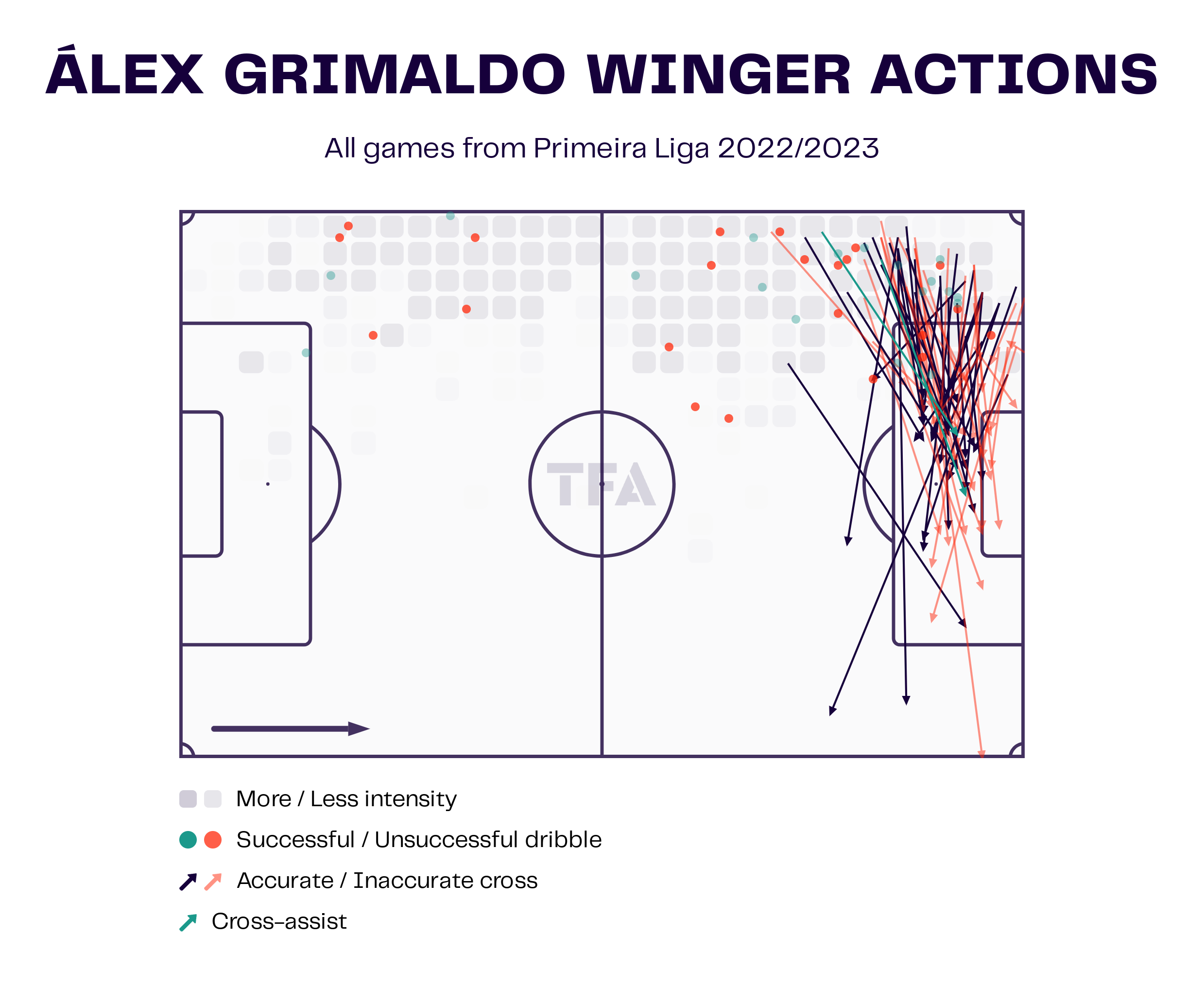 Playing as the left back, Grimaldo creates overlaps on his flank and also drifts into inside channels to deliver pin-point crosses. The two visuals above shed light on his proficiency at putting crosses into dangerous areas inside the penalty box. The 27-year-old delivers as many as 6.14 crosses per match with 45% accuracy. He also attempts 2.7 dribbles per match with 45% accuracy. Last but not least, Grimaldo averages 1.7 touches in the penalty area and makes 2.01 progressive runs per match.

Alex Grimaldo has emerged as a top performer for Benfica over the last few seasons. He is steady in defence as a left-back but also displays a lot of attacking prowess with his ability to score goals as well as provide assists. Benfica will be expecting the same consistency from the 27-year-old in their quest to become the Portuguese champions this season.