22-year-old Abel Ruiz has been an emerging player for Sporting Braga over the past two seasons in Liga Portugal. The centre-forward progressed through Barcelona’s renowned youth setup before moving to Braga in early 2020. Since then, he has been gradually developing his game and gaining prominence with each passing season in Liga Portugal. The young Spaniard has consistently improved on his performances from previous years and has become a key component of Braga’s attacking line. He has also thrived in continental competitions like the UEFA Europa League. Ruiz has been essential for Braga this season, scoring three goals and contributing four assists thus far, with his team currently well within the league’s top three spots. Let’s now look at some stats that capture Abel Ruiz’s performances as a Braga player in Liga Portugal 2022/23. 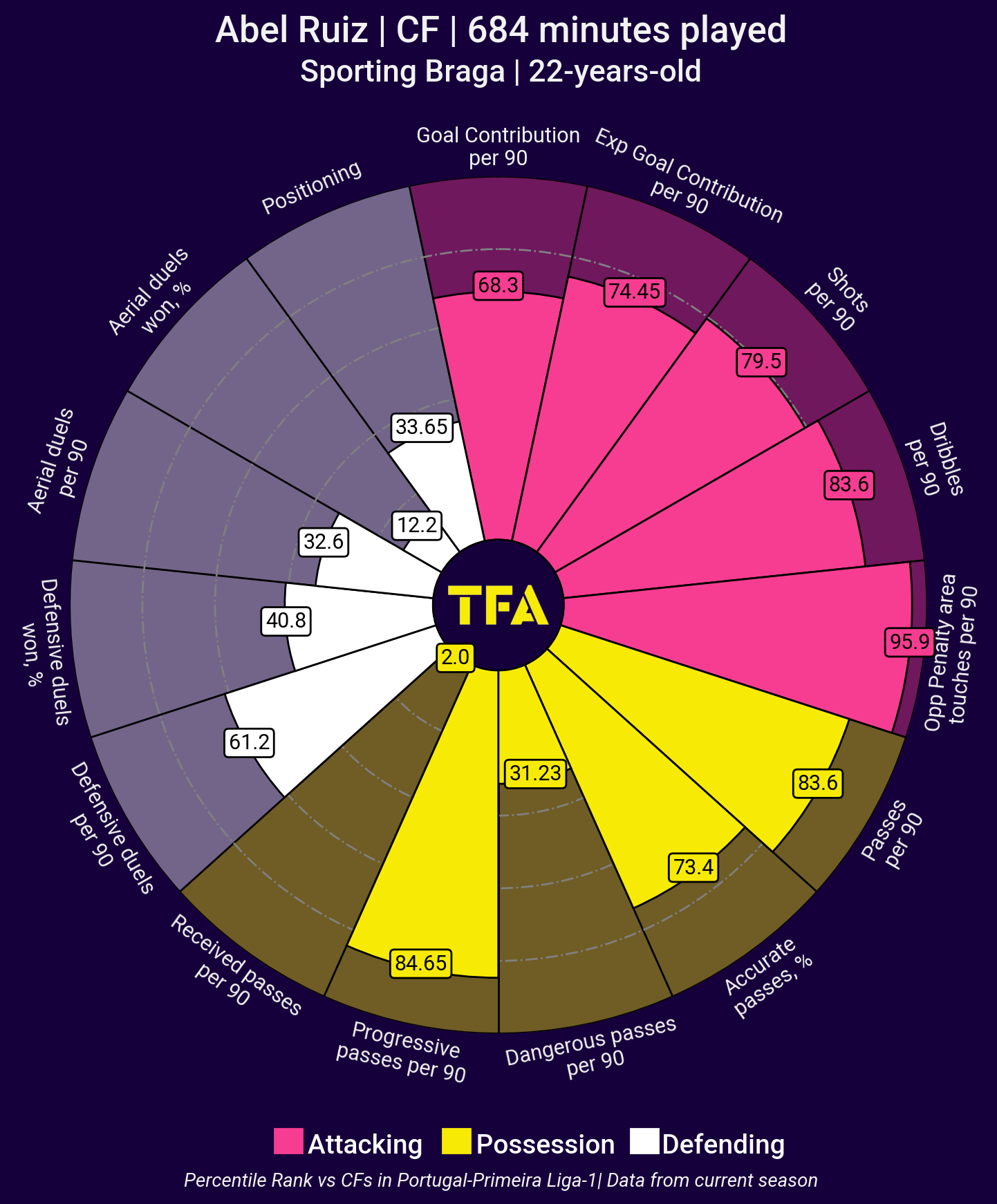 Abel Ruiz has played in all of Sporting Braga’s 15 league matches this season, starting in eight matches and averaging 47 minutes per game. The above viz shows the percentile rank of the player’s stats compared to other centre-forwards in Liga Portugal. It can be observed that the Spaniard has a high percentile rank under the following attacking and possession indicators: penalty area touches, expected goal contribution, dribbles, shots, progressive passes, and accurate passes. While in the defence department, he has a decent record of winning defensive duels. 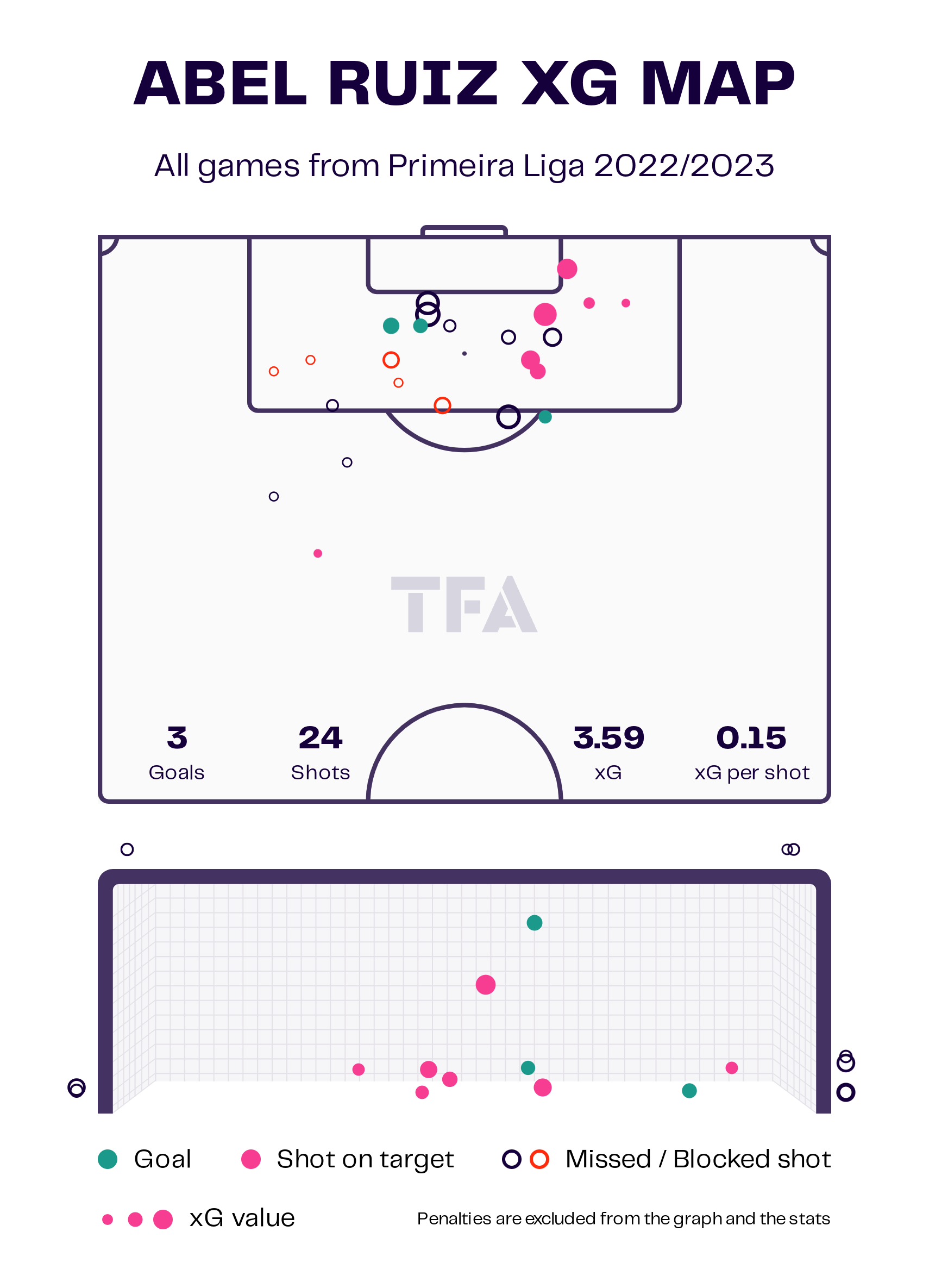 Abel Ruiz has found the back of the net three times so far this season, with an xG value of 3.59. He is scoring at the rate of 0.35 goals per match while averaging an xG rate of 0.42. The viz above depicts the centre-forward’s shot map from Liga Portugal 2022/23. He has attempted 24 shots, with ten on target. Like a true centre forward, he has taken most of his shots from inside the penalty area. Two of his goals have come in the vicinity of the six-yard box, and the other one has come from the edge of the 18-yard box. Ruiz takes an average of 2.81 shots per match with an accuracy of 41.7%. 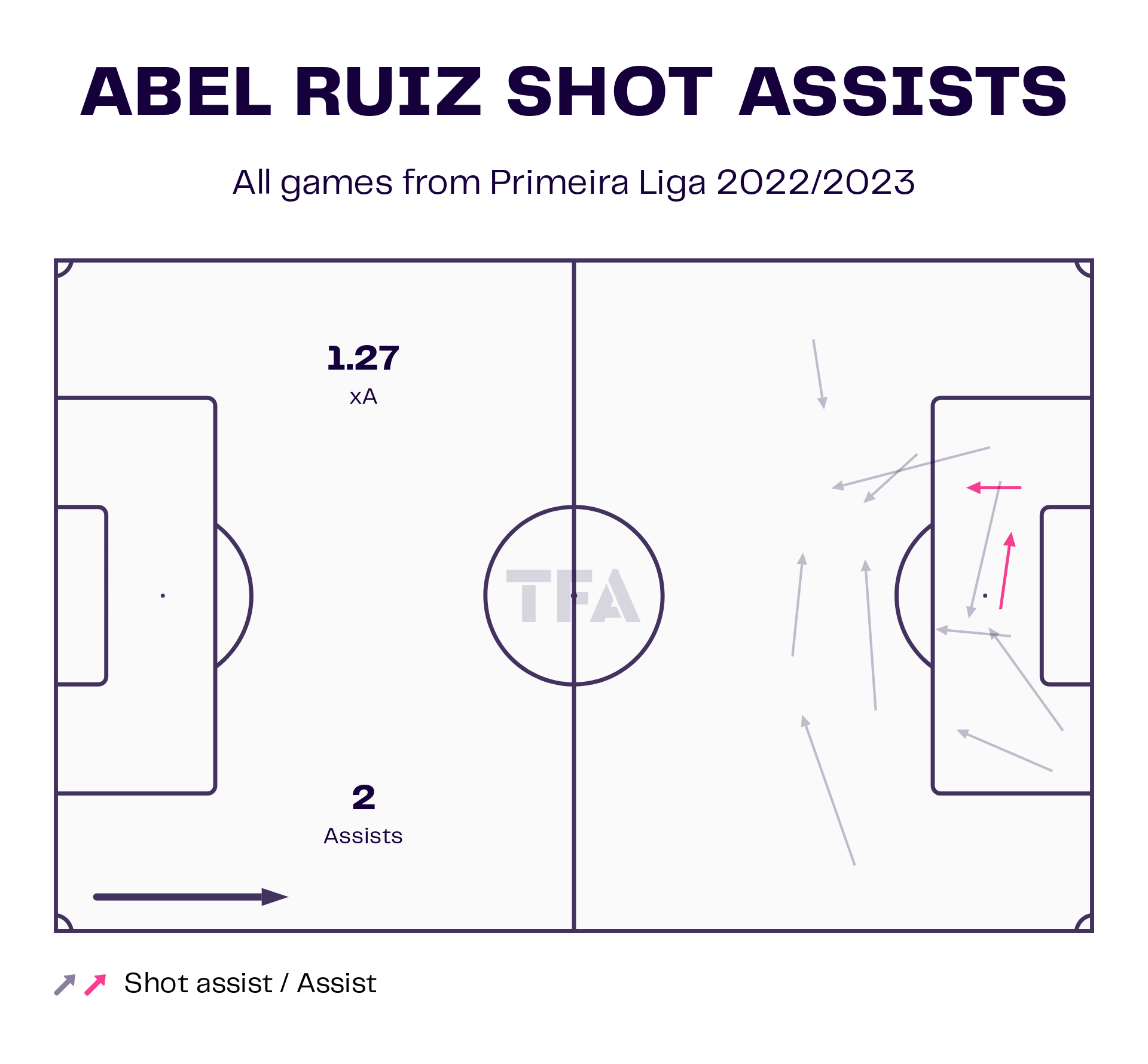 Another important facet of Abel Ruiz’s gameplay is his ability to provide goal-scoring chances for his teammates. Thus far, he has four assists to his name in Liga Portugal 2022–23. Currently, he is providing 0.23 assists per match, which is higher than his per-match xA rate of 0.15. Ruiz attempts 22.73 passes per match with an impressive accuracy rate of 81.4%. Additionally, he makes 3.75 progressive passes and 1.52 passes into the penalty box per match. He has created one big chance this season and averages one key pass per 90 minutes. Furthermore, Ruiz generates 1.41 shot assists per match. 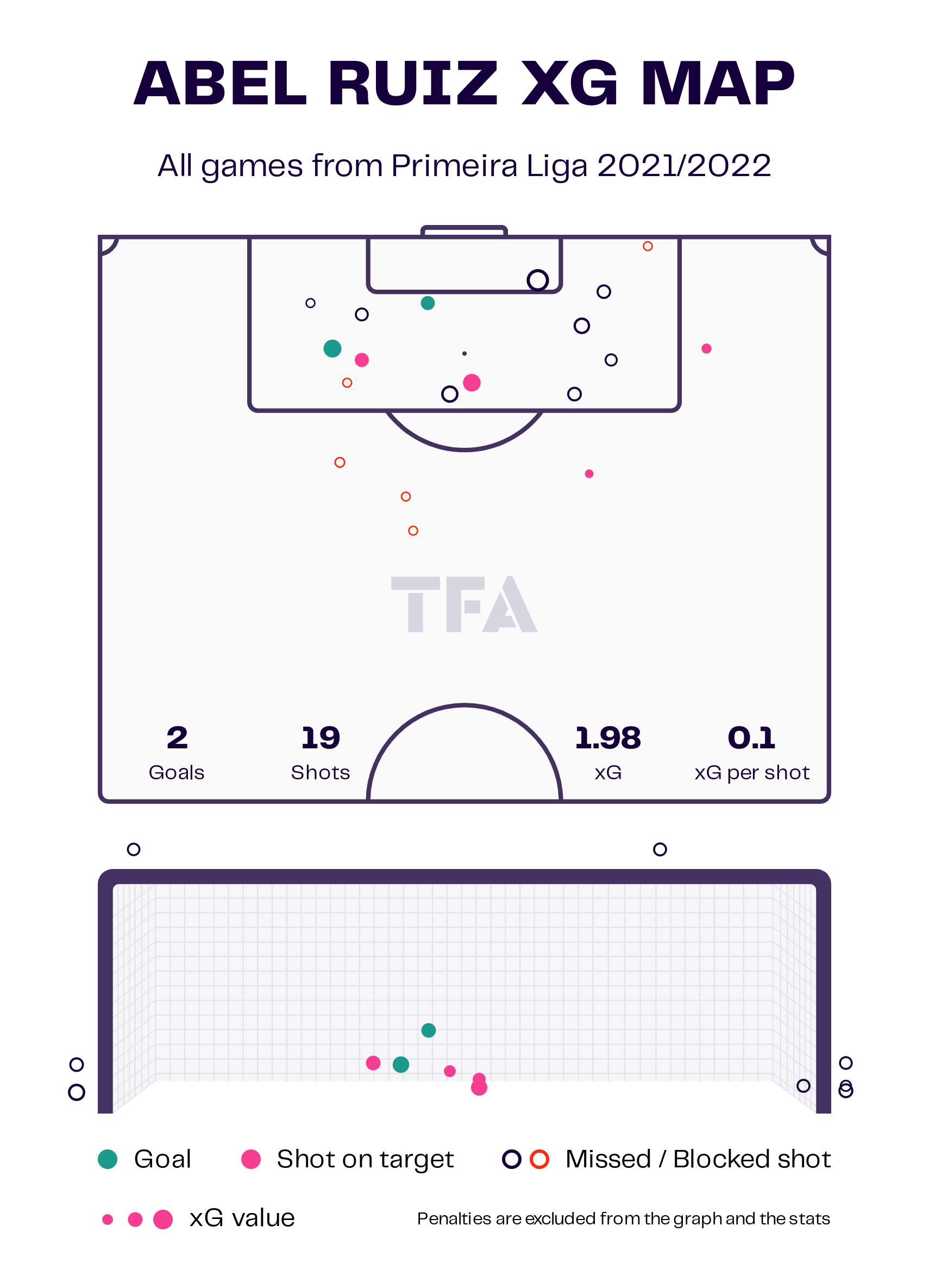 Compared to the Liga Portugal 2021/22 season, Abel Ruiz scored two goals and provided three assists in 28 appearances. He was averaging 1.11 shots per game with an accuracy rate of 31.6%. Ruiz was scoring 0.12 goals per game with the same xG per match rate. As for his creative side, the winger averaged an xA rate of 0.1 and 0.88 shot assists per match. The 22-year-old has improved his attacking output this season and has already bettered his goal-contribution tally from last year.

Abel Ruiz with the ball 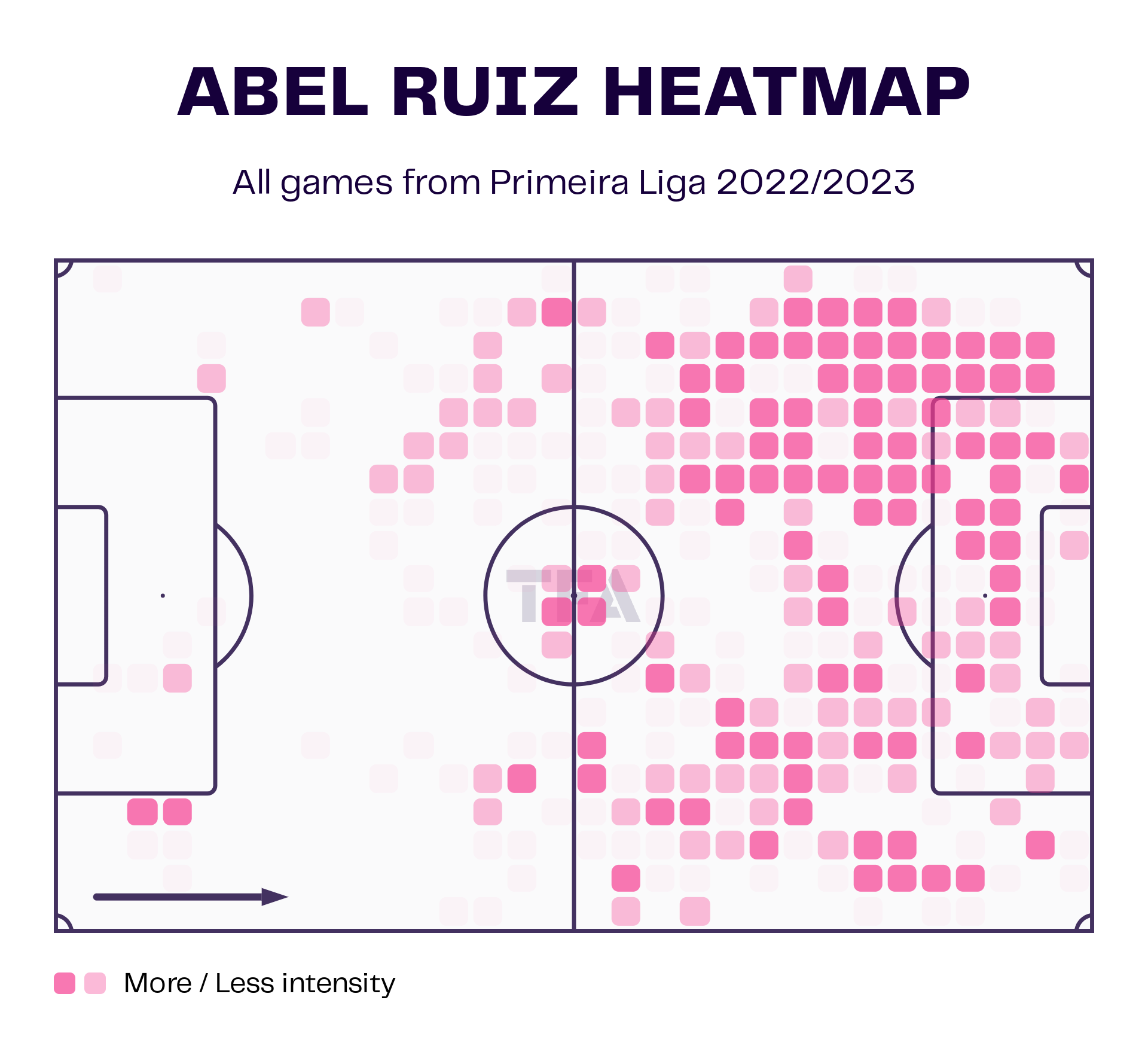 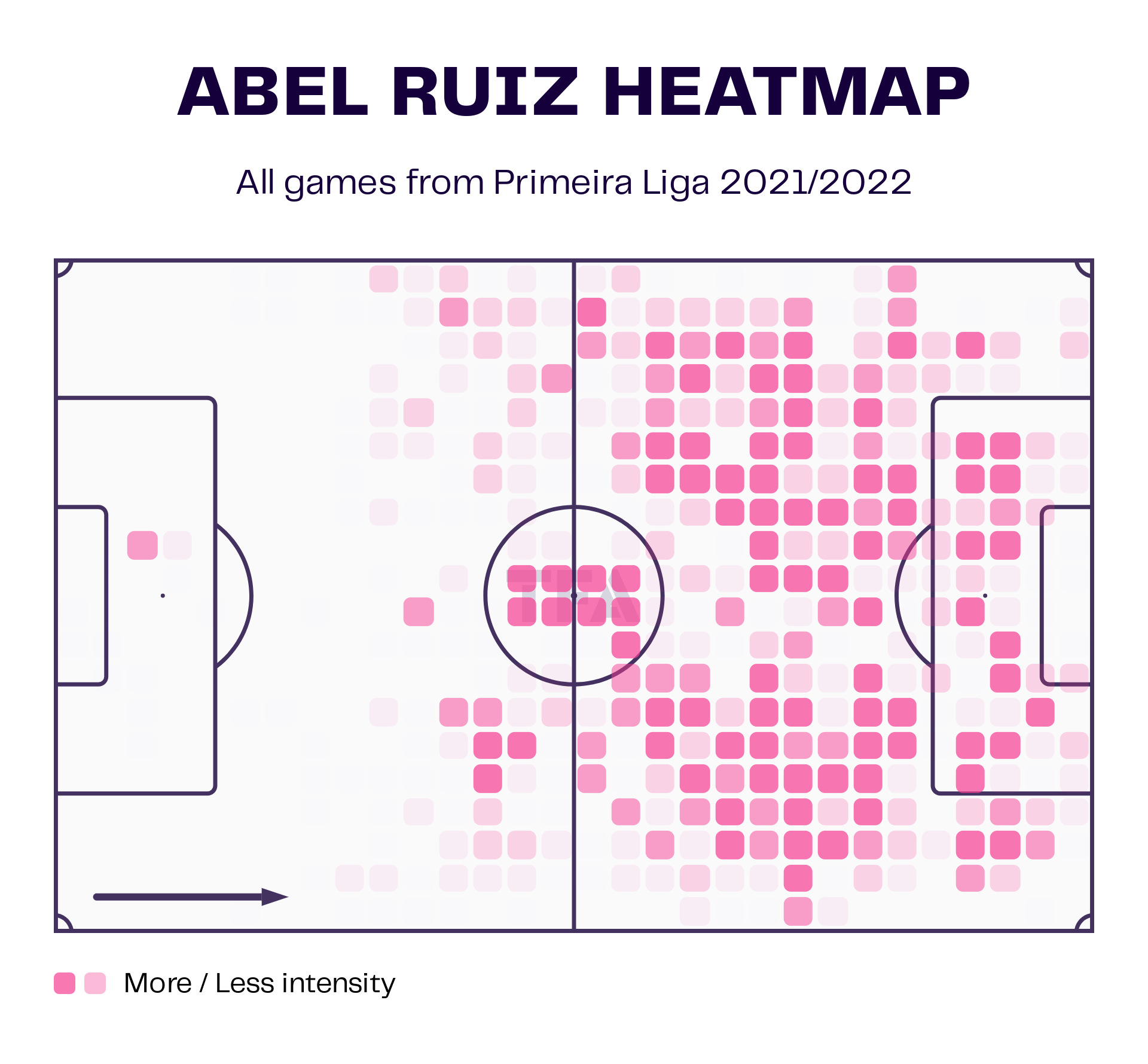 Abel Ruiz has usually played in a 4-2-3-1 or 4-4-2 system under Artur Jorge at Braga. While his prime role is to prowl in the box for goal-scoring opportunities, he also drops into the middle third to link up play. The two visuals above are a comparison of the player’s heat maps from this season and the previous one. It can be observed that Ruiz has displayed more intensity in certain areas of the pitch, including the final third. 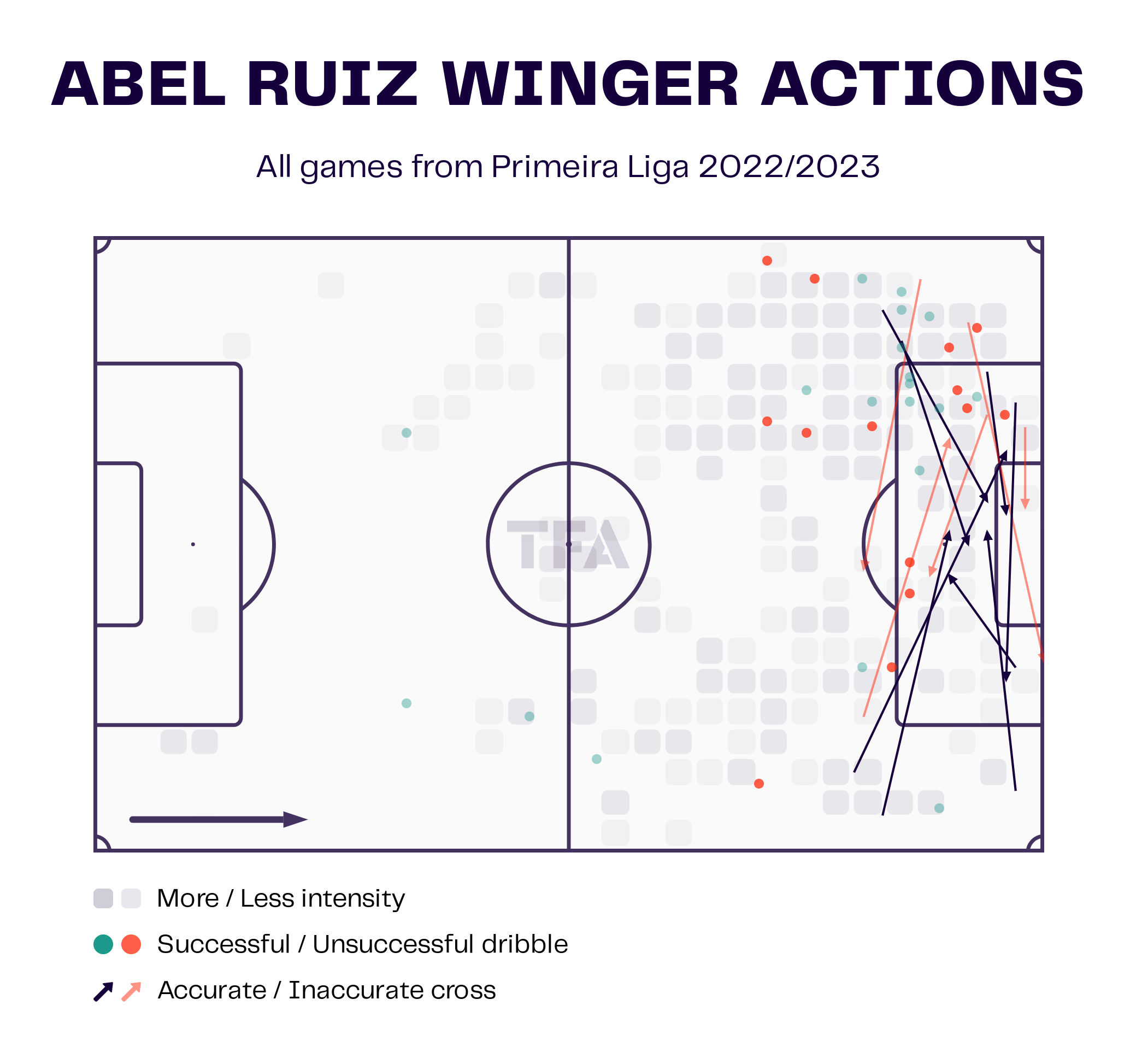 Abel Ruiz enjoys occupying spaces in the wide areas, from where he takes on a dribble or puts in a cross into the box. The viz above highlights the winger actions performed by Ruiz, through which he creates scoring chances for his teammates. The centre forward attempts 3.87 dribbles per match with 57.6% accuracy and 2.11 crosses with 44.4% accuracy. Furthermore, Ruiz makes 1.23 progressive runs per match.

Abel Ruiz has emerged as a top talent with Sporting Braga. The 22-year-old offers a goal-scoring threat along with the ability to provide assists. He is already evolving into a proper centre forward, and Braga will want their youngster to continue with the same levels of performance.